Food & Drink—the LCBO’s fan-adored magazine of gourmet pursuits—is rewarding its diehard readers with a new web series that hops across the province in search of the best local vintners, craft brewers, distillers and culinary artisans.

Hot on the heels of an inaugural episode on Prince Edward County comes a new installment that tours the Niagara Peninsula, a region whose food-and-drink accolades are known worldwide.

Throughout the series, in digestible eight-to-12-minute episodes, hosts Miranda Keyes and Devan Rajkumar take turns teaming up with a special guest to explore a single Ontario region. Along the way, they’ll collect the ingredients to make a gourmet meal and cocktail by visiting five great spots in the chosen destination.

This time it’s Rajkumar’s turn to lead the episode. The Toronto-based chef makes his first stop at family-owned The Pie Plate, a bakery and restaurant where he meets his travel partner, Niagara chef Tania Ganassini of Top Chef Canada fame. Ganassini explains why The Pie Plate is a personal go-to for incorporating Niagara fruit into its dishes, for its legendary homemade sourdough, and for a local focus on wine, beer and cocktails.

From there, Rajkumar and Ganassini travel together to the meticulously landscaped Rosewood Estates Winery, where the Roman family has been raising bees for three generations. With 300 hives on the grounds, it’s not surprising that bees are a part of everything Rosewood produces, from low-intervention wines to honey.

Next up is Upper Canada Cheese, makers of Niagara Gold, an earthy, semi-firm cheese made from the milk of rare-breed Guernsey cows. The artisanal producer is especially noted for its award-winning soft-rind and semi-soft products.

Rajkumar and Ganassini’s fourth stop is Quiet Acres, a 39-year-old family-run produce farm with a daily variety of fresh fruits and vegetables, from apples to zucchini. Quiet Acres also supplies produce to many of the region’s top restaurants.

Finally, the duo’s journey ends at Niagara Oast House Brewers, where Ganassini’s husband is the chef. Oast House offers traditional farmhouse ales and seasonal beers made from hyper-local ingredients. Its two-storey patio overlooking a vineyard is the Instagram-worthy spot for Rajkumar and Ganassini to combine all of the ingredients they gathered throughout the day. Watch the video to find out what they made.

In the next episode of 5 Stops, Miranda Keyes and Nick Liu, executive chef of Toronto’s DaiLo and Little DaiLo, visit Norfolk County. 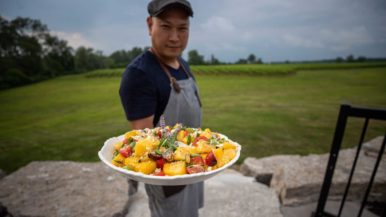 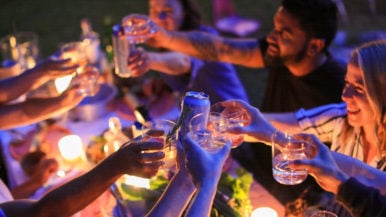