A decade before Drake began dominating the charts and building the foundation for the Toronto Sound as we know it today, the city was churning out an array of progressive hip hop voices. A handful of photographers captured the energy of these ’90s trailblazers, and their photographs are now display at the McMichael Canadian Art Collection in Kleinburg. The same museum that houses the Group of Seven gallery is now showcasing images of Michie Mee, Dream Warriors and Ghetto Concept—a flashy, exuberant disruption to the usual landscapes.

Currently running as part of this month’s Contact festival, Everything Remains Raw: Photographing Toronto’s Hip Hop Culture from Analogue to Digital will remain at the McMichael until October 21. We spoke spoke with curator Mark V. Campbell (of Northside Hip Hop Archive) to learn the backstories on a dozen of the images he has preserved, and the insights they provide into this fertile phase of Toronto hip hop, before it blew up worldwide. 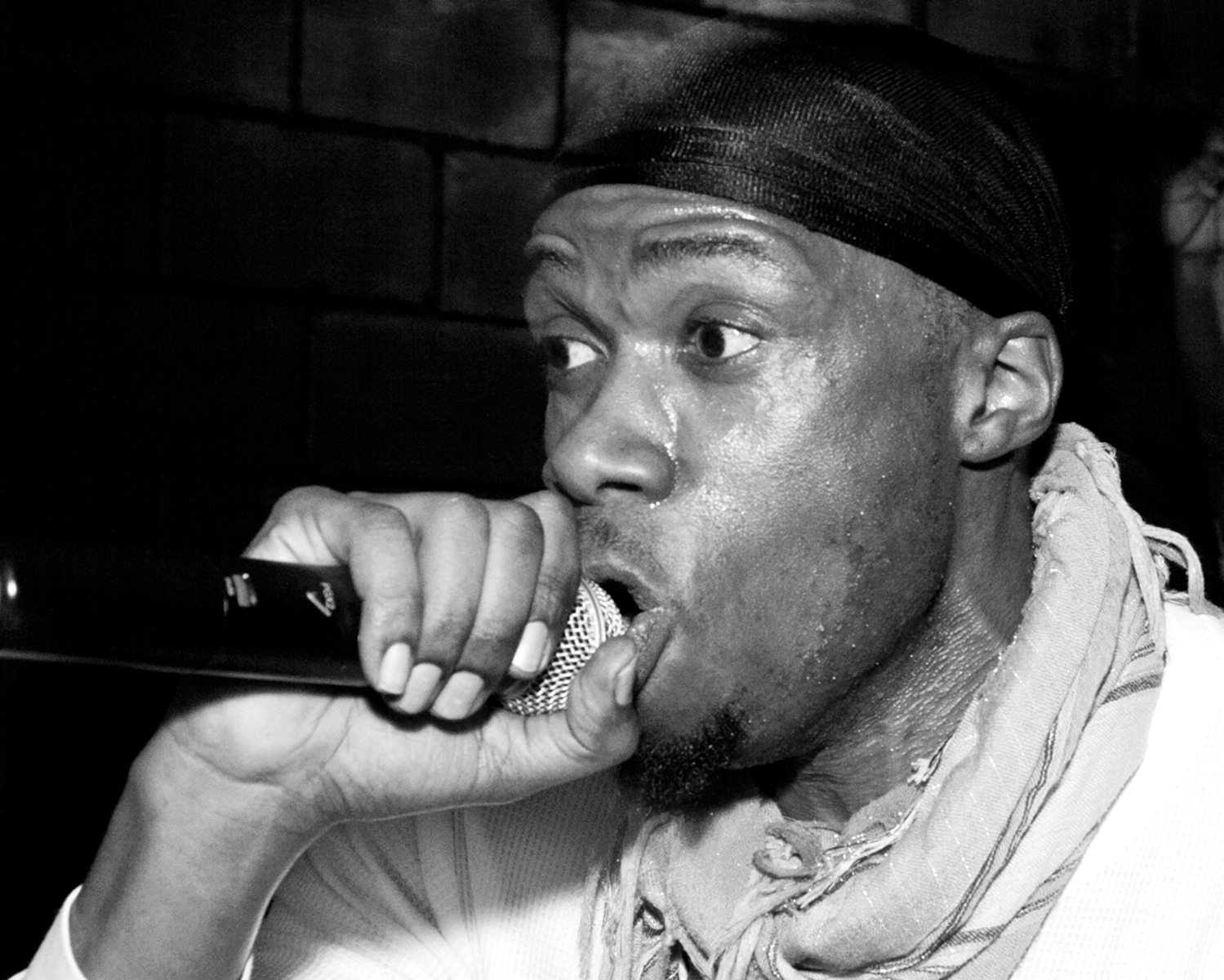 “That shot is the one that got all my ideas flowing,” Campbell says. He was DJing at an early Northside exhibition in 2010 and casually asked veteran Toronto MC Thrust if he’d be able to swing through and perform on a grimy, wooden stage against a brick wall for a bunch of high school kids. As Campbell watched a younger generation recite Thrust’s energetic verse from the classic posse cut “Northern Touch,” he knew he was witnessing a special moment. Campbell has a video of the performance and can spot photographer Nabil Shash’s flash bulb going off to capture Thrust mid-spit. 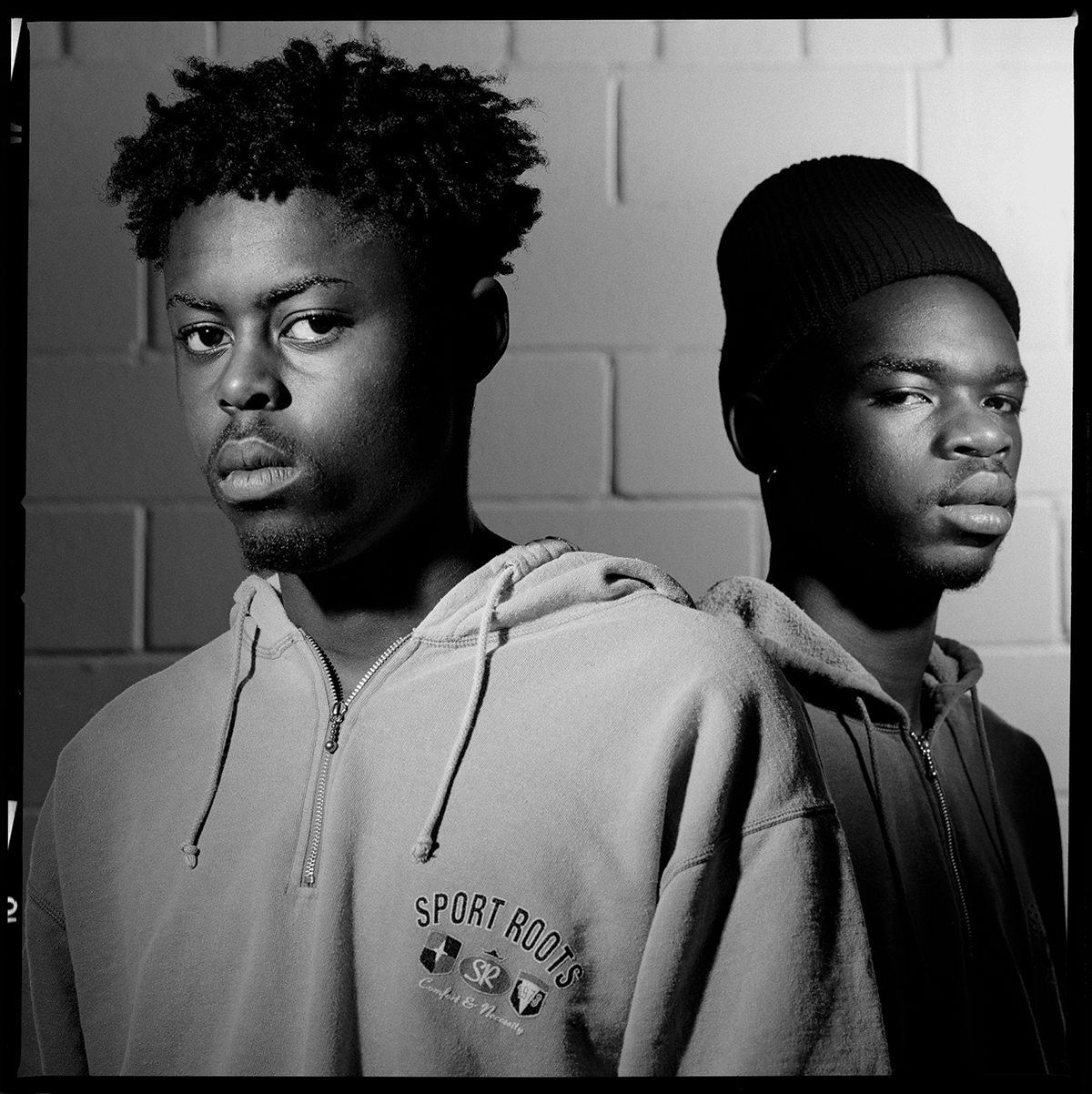 For this shot of the rising Rexdale rap duo Ghetto Concept, Patrick Nichols played with light and shadowing to achieve the same effect as the movie poster for the iconic hip hop film Juice (the flick that propelled Tupac Shakur to superstardom). The lighting and composition presented some challenges. “Both of those guys have really dark complexions, so finding a way to get the light to work just right was beautiful,” Campbell says. “It’s one of the most technically sound images in the exhibition.” 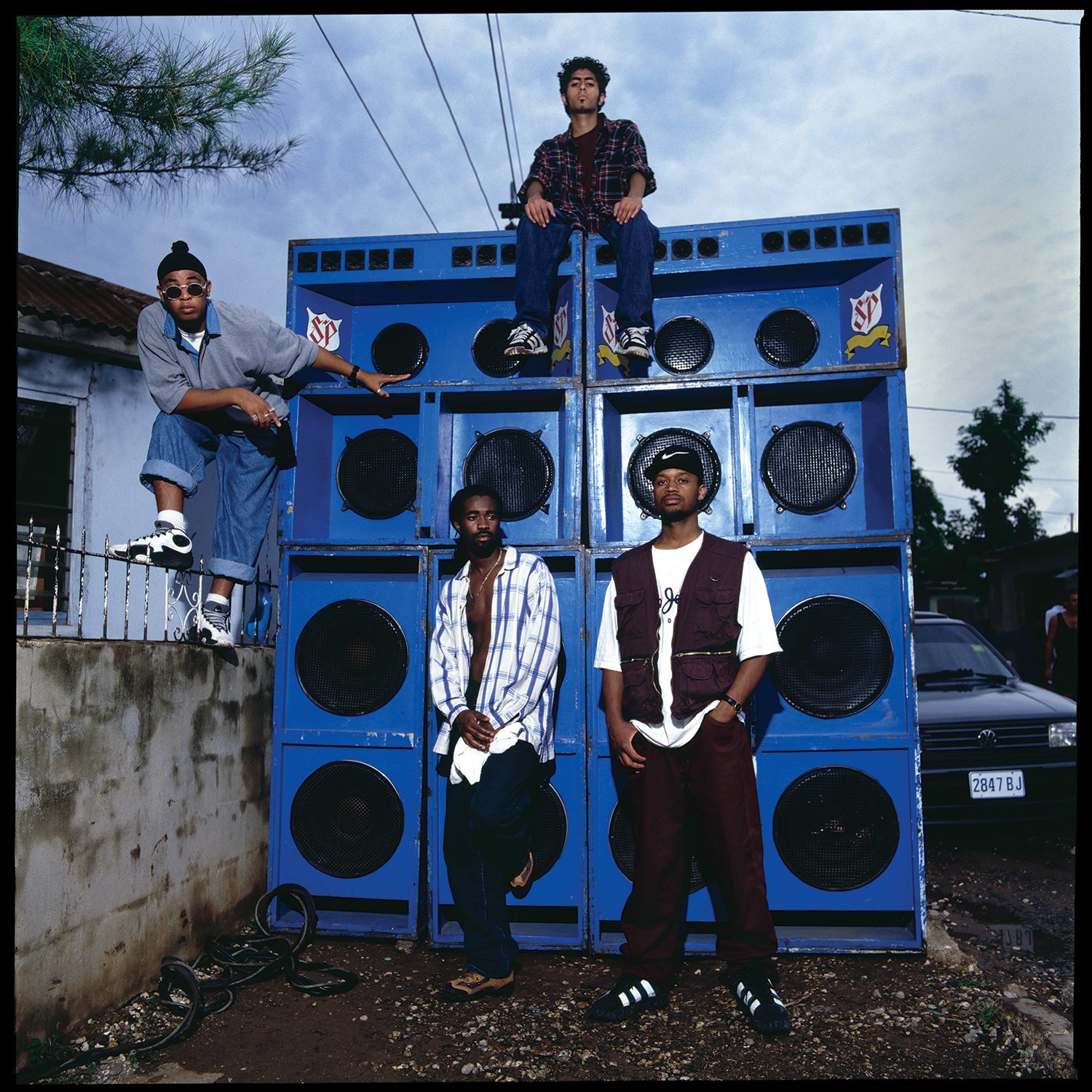 Nichols shot boho-rap crew the Dream Warriors—best known for their 1991 Quincy Jones–sampling single “My Definition of a Boombastic Jazz Style“—against a monstrous sound system they stumbled upon in Jamaica, where the group had travelled to collaborate with Beenie Man at the height of his dancehall godliness. The image speaks to hip hop’s origins in sound-system and DJ culture (which was exported from Jamaica to New York), as well as the global reach of the Dream Warriors—a Scarborough outfit that enjoyed more success in Europe than in their home country. 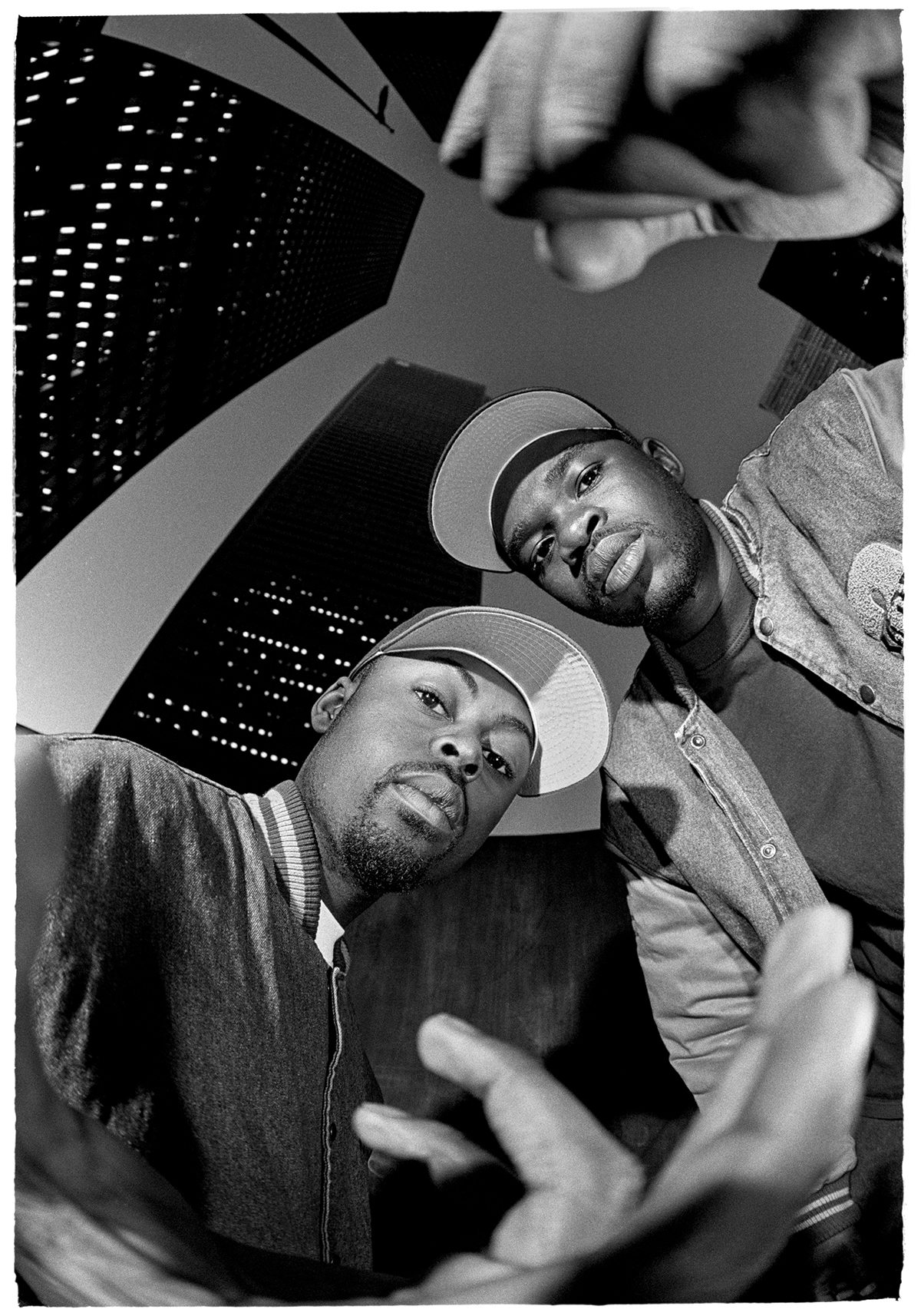 Nichols laid down on the sidewalk and shot up toward his subjects to give them the same towering presence as the TD Bank building behind them. This shot captures two dudes with Rexdale roots casting larger-than-life figures in the city’s financial epicentre at a moment when they were on the cusp of a breakthrough. When Ghetto Concept’s addictive “E-Z on tha Motion” dropped the following year, it rapidly became a local anthem and won the Juno for Best Rap Recording in 1996. 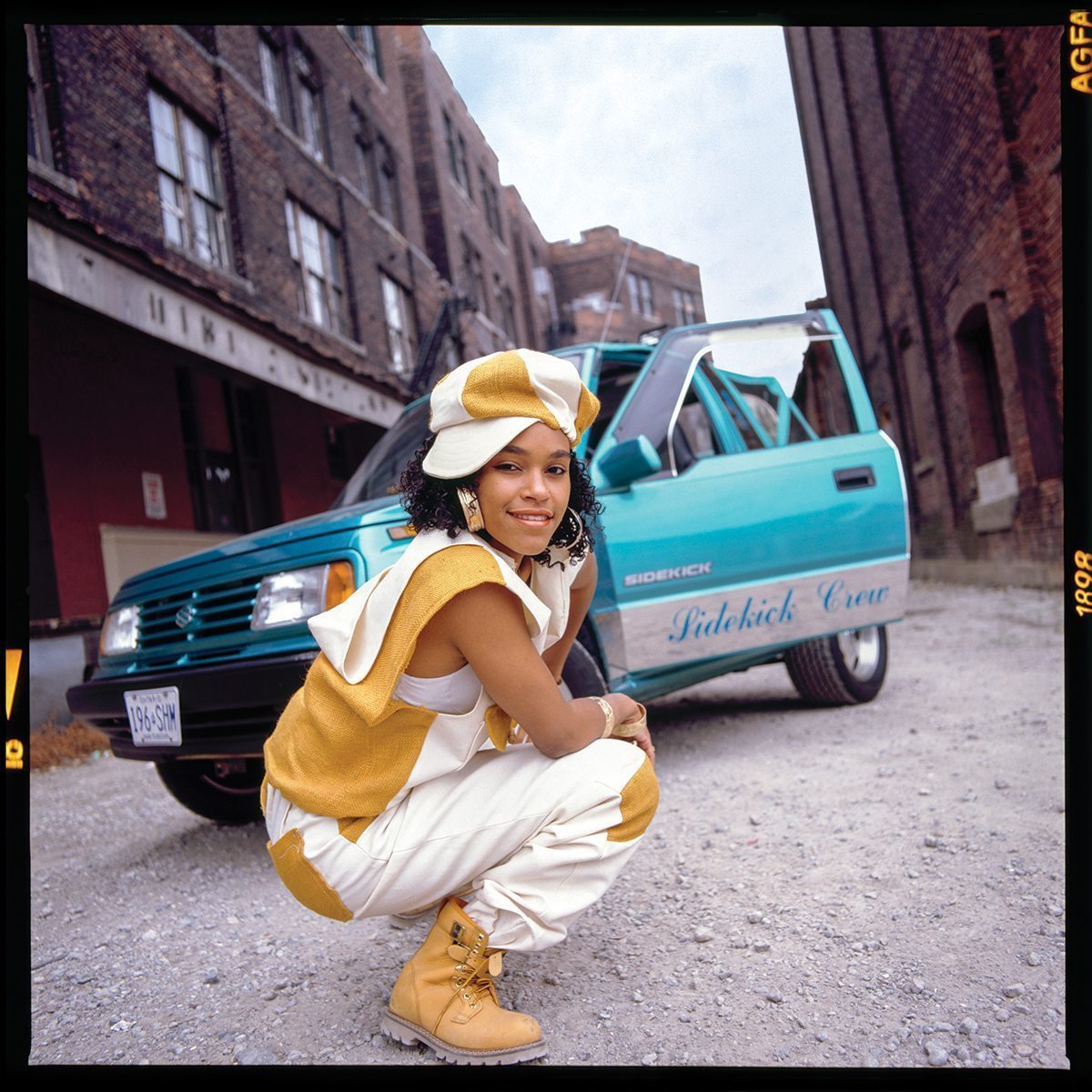 The first Toronto hip-hop artist with a major American record deal, Jamaica-born funktress Michee Mee rolled around town with her friends, the Sidekick Crew, in colourful Jeeps with their logo displayed on the side panels. Fresh-dipped in Timberland boots and wearing a hat and outfit she sewed herself, Michee is striking a classic B-girl stance in the artist haven of King Street West before the neighbourhood went full condo. “It really speaks to the originality that hip hop strives for,” Campbell says. “The idea of not being a biter is still part of the culture.” 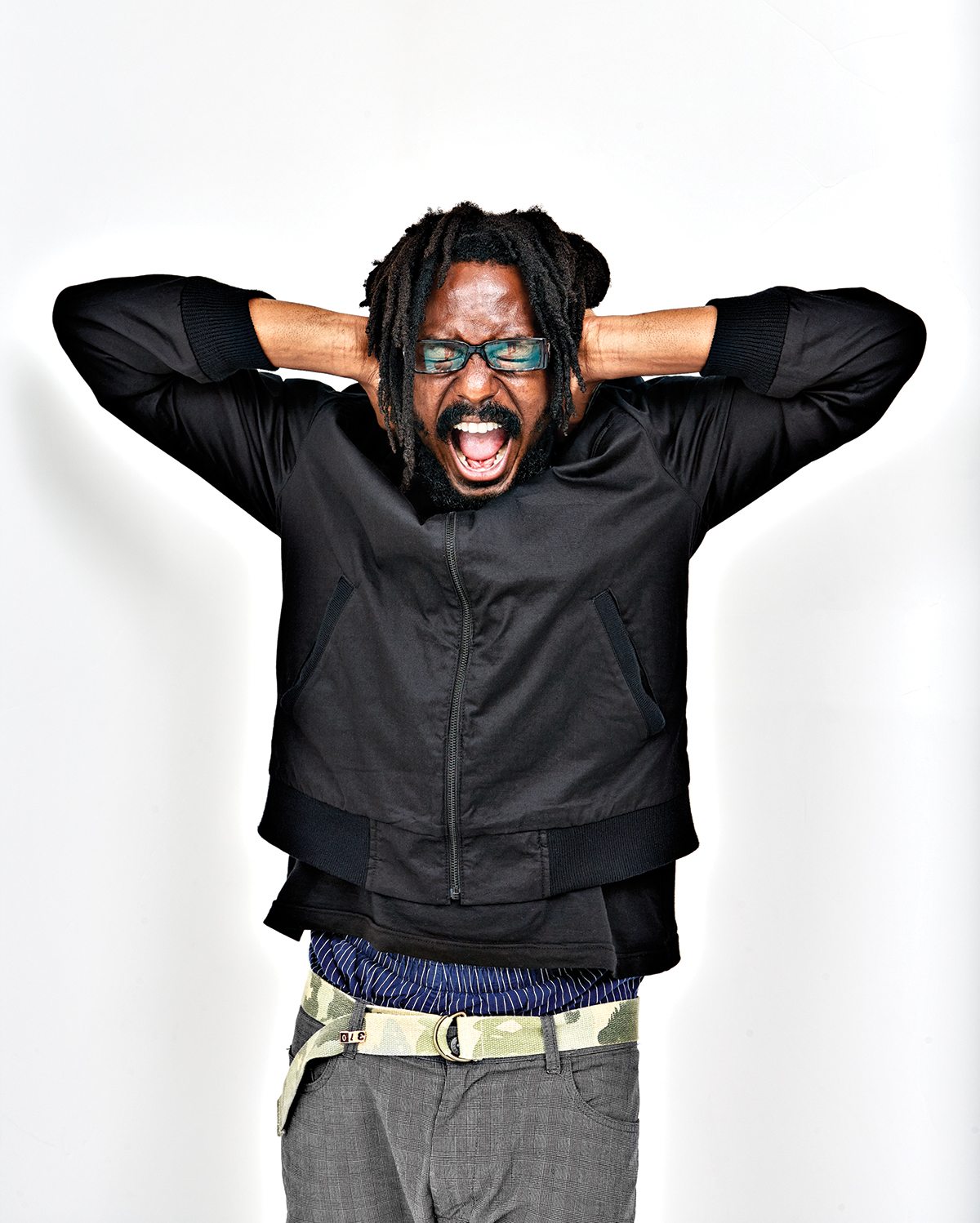 K-os may have been famous by the time the flash bulb exploded here, but he was also still that young, brash kid with his pants sagging and his shirt untucked. “He’s saying, ‘I’m not listening to you. I’m not looking at you. I’m doing me,’” Campbell observes. The clean white backdrop and sharp lighting make sure the artist’s statement pops. 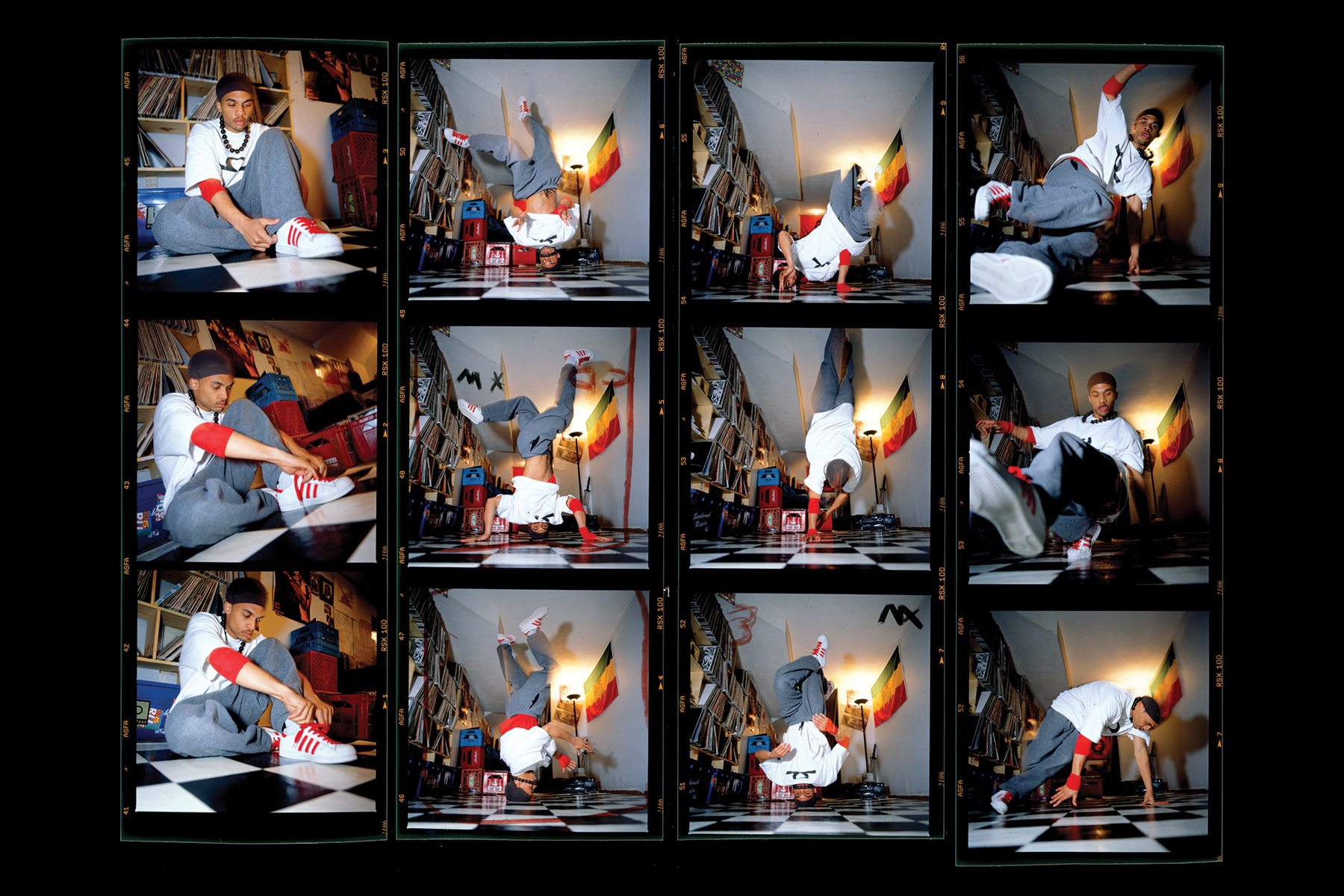 In this contact sheet, the rapper and graffiti artist Mathematik breakdances in his Malvern bedroom. A nod to hip hop and photography as labours of love, Nichols’ sheet highlights the trial-and-error process of analogue photography and editing. The images drill home the idea that hip hop is not reliant on a mass audience or public consumption—it can still be magical even when you’re expressing all by yourself. 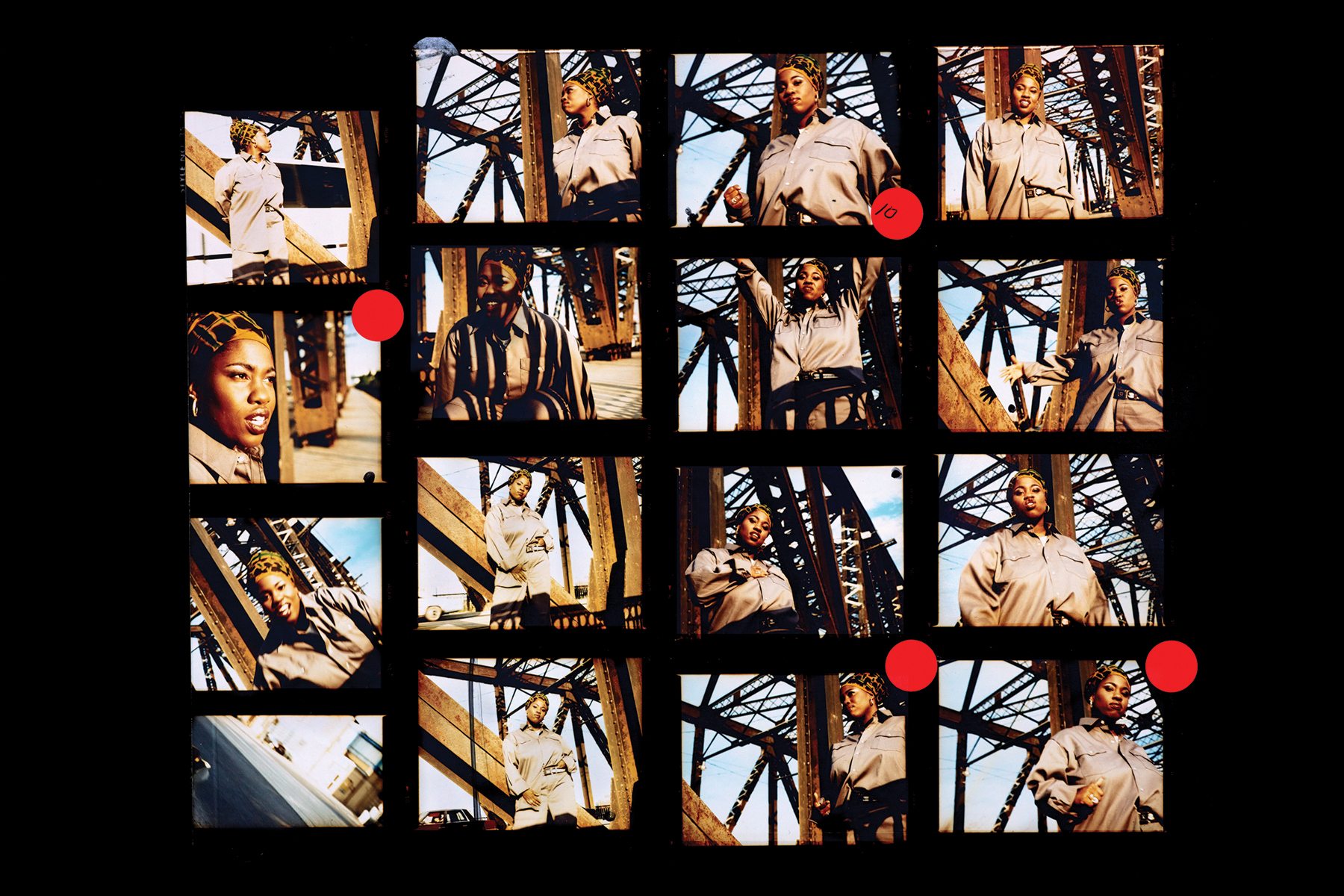 Inspired by the hard-rock aesthetic of American Def Jam artist Bo$$, this cover shoot for one of Motion’s early-’90s singles epitomizes an era when women in rap had to push back against the half-naked video-candy imagery that was ubiquitous on MuchMusic and MTV. Motion is cast against iron beams, giving her an aura of power. Multiple shots are included to reveal Fakiyesi’s compositional strategy. 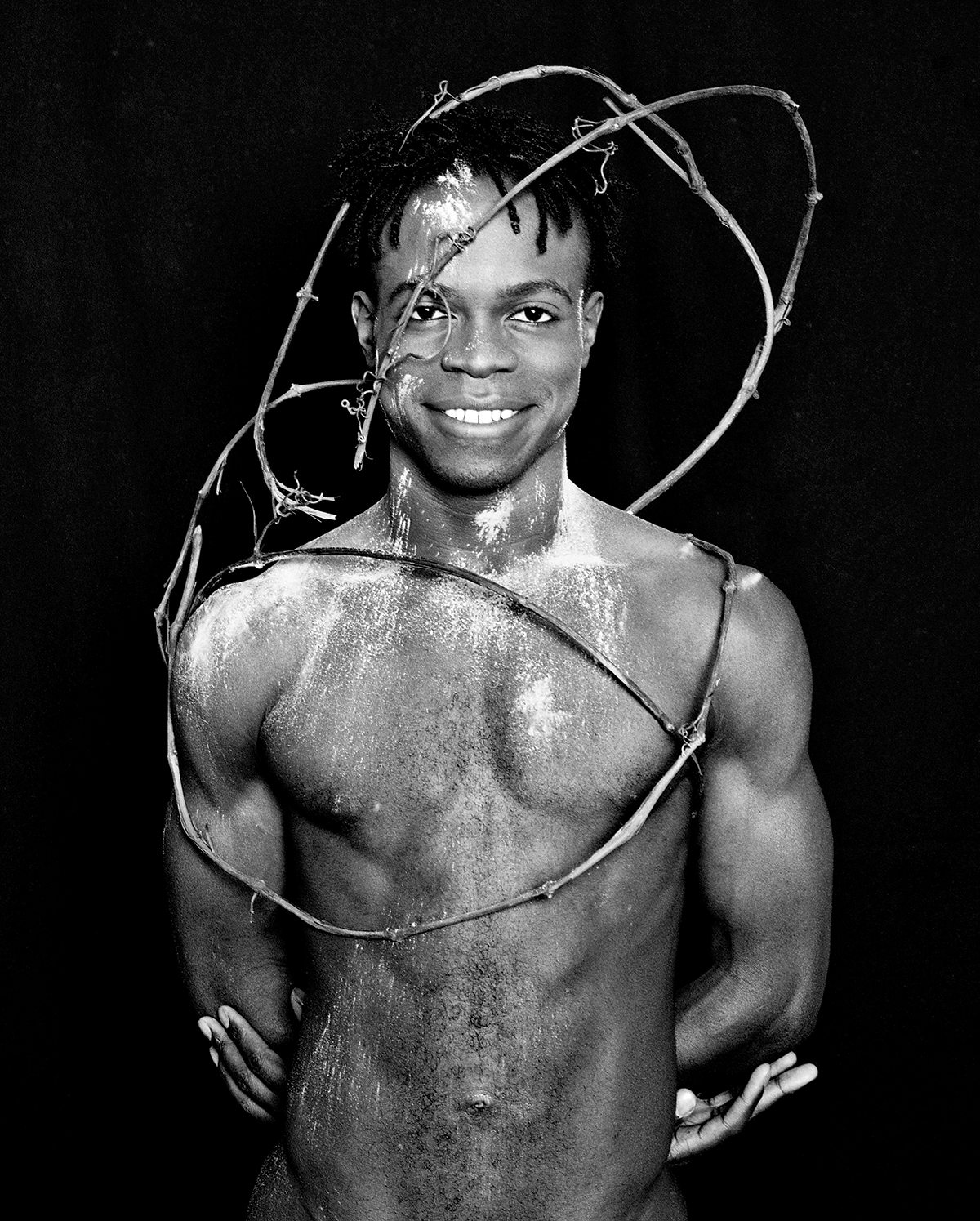 For this 1994 studio session with the late JackSoul singer-songwriter Haydain Neale, Chambers pushed his muse—known at the time for his suave, classy attire—toward a more provocative visual expression. Though Neale’s music hewed closer to soul than hip hop, this image was included to remind us of rap’s connections to other genres. From its earliest beginnings, hip hop has always been influenced by reggae, funk, soul, rock and calypso, and, in curating the exhibit, Campbell wanted to acknowledge the often-overlooked roots of the culture. 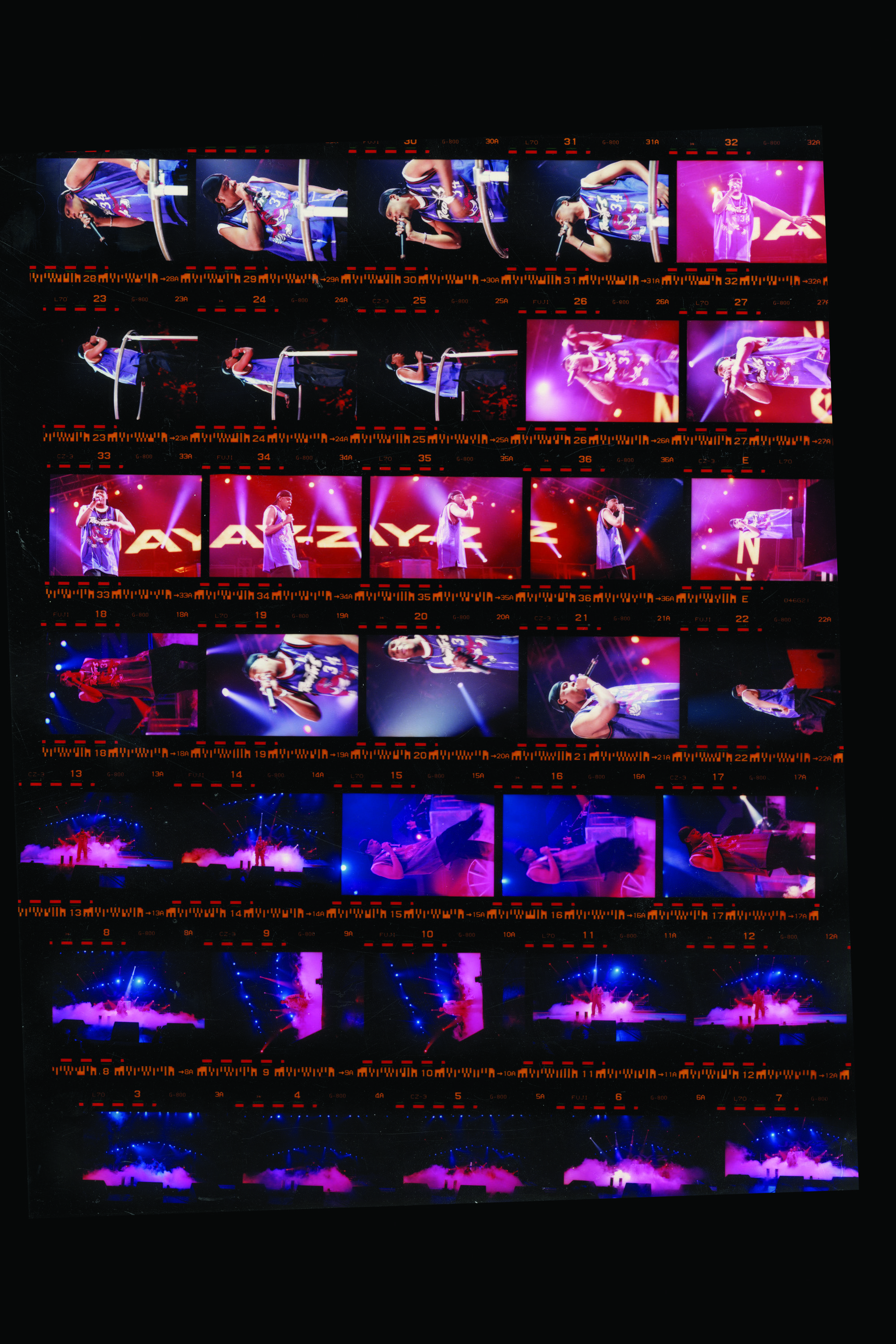 For this 2003 concert at SkyDome, Jay-Z donned a Raptors jersey but—true to his imposing stature—chose the number of elbow-throwing tough guy Charles Oakley (a former New York Knick) rather than that of Vince Carter (the local favourite at the time). By featuring Jay-Z in his exhibit, Campbell wants to remind us of Toronto’s role as the first international audience that helped popularize some of the greatest icons in hip hop. Ice Cube, Public Enemy, Run-DMC, Queen Latifah—their first gigs across the border were at our city’s hallowed Concert Hall. 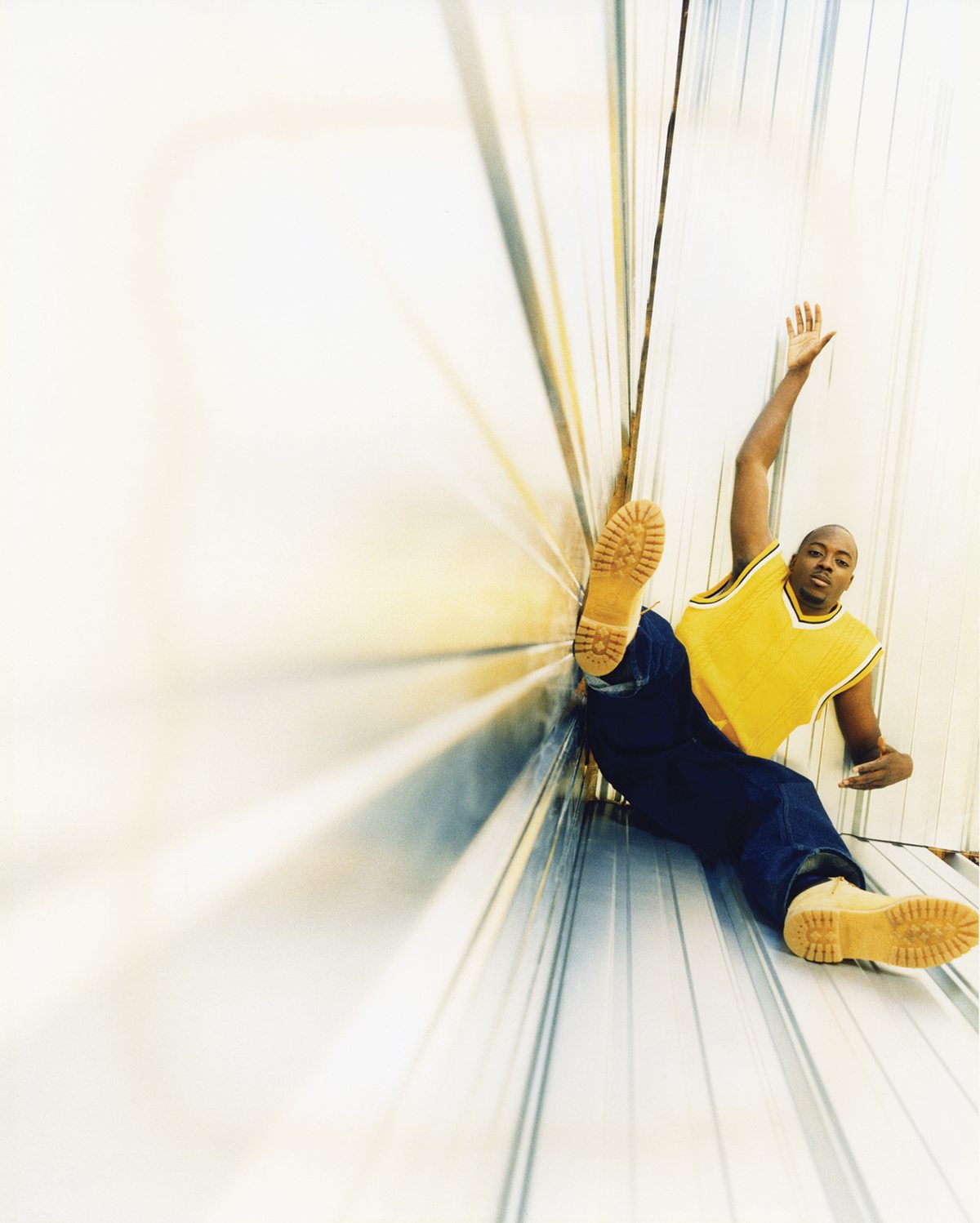 For this Globe and Mail shoot, a styled-out Choclair stuffed himself in a shipping container. He had just inked a juicy international deal with Virgin Records and was blessed and burdened with the title of Canada’s next great rap hope. “He’s staring directly in the camera with his legs spread open and his arms wide in this act of defiance,” Campbell says. “He’s saying, ‘Deal with me as I am. I’m not going to make myself pretty for your camera.’” 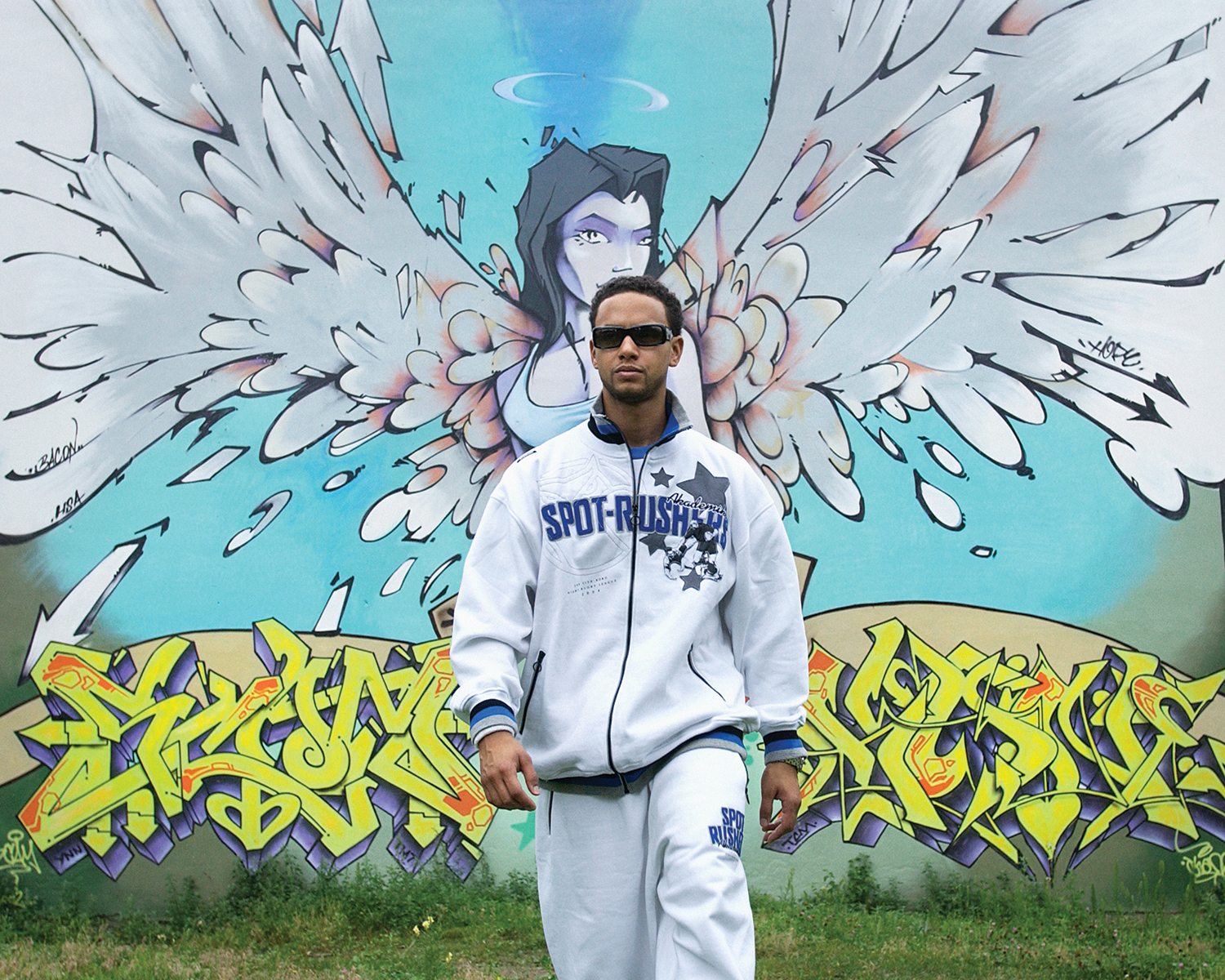 In this shot, Director X poses against a SKAM-painted Queen Street graffiti wall for a Peace magazine cover. The wildly successful music-video-turned-film director— the man behind Drake’s unstoppable meme machine, “Hotline Bling“—began his career humbly, sketching his Afro Astronaut character for Boom Comics and interning at MuchMusic. He later worked his way up to brand-name status as an auteur in the big-budget North American hip-hop video business of the early 2000s—an ascent that’s perfectly crystallized by his serendipitous acquisition of wings in this photo.