“We cleaned the house. We watched some Netflix. And then we made a drag queen”: The story of an epic quarantine makeover

“We cleaned the house. We watched some Netflix. And then we made a drag queen”: The story of an epic quarantine makeover 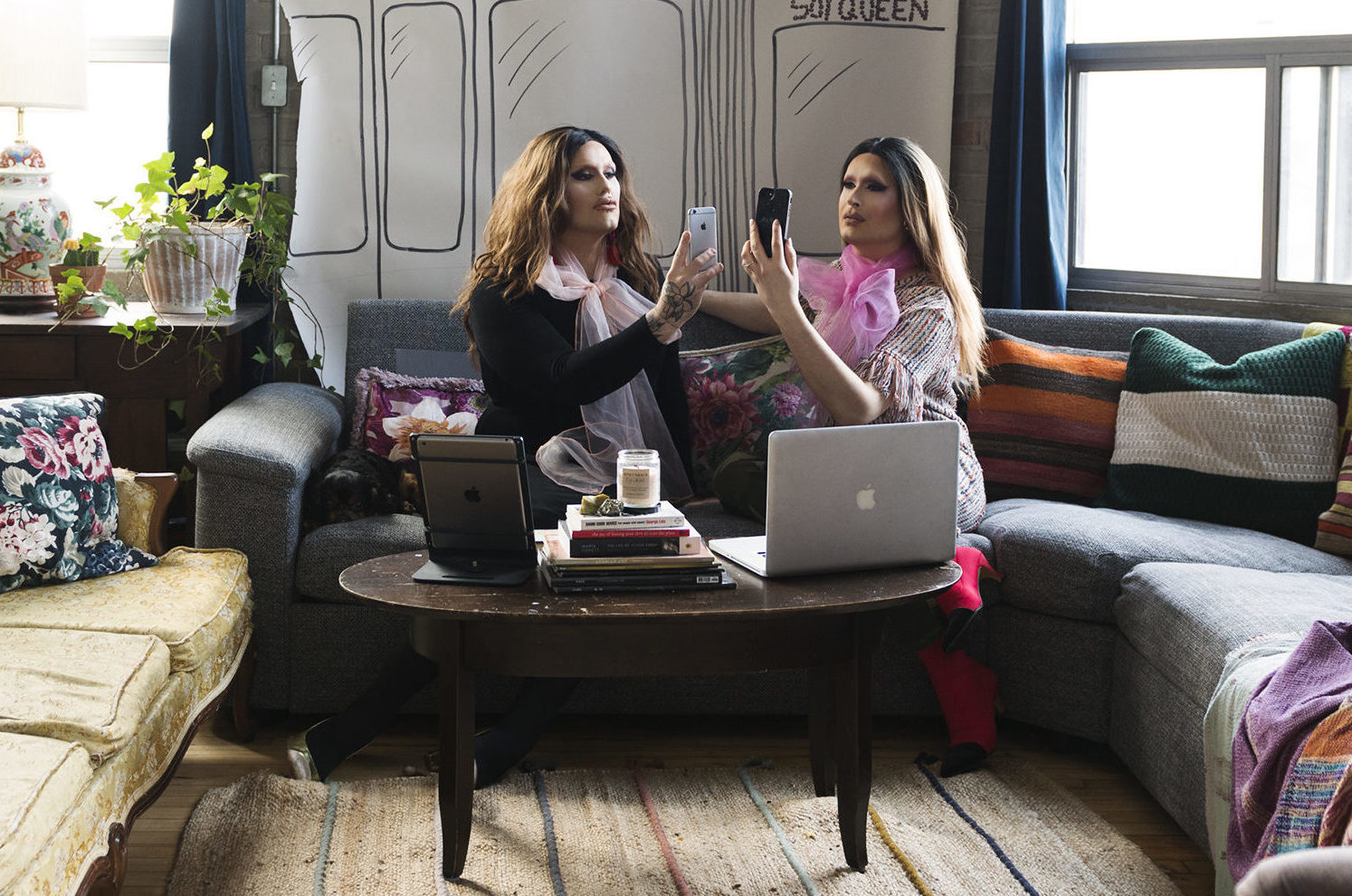 I was already doing drag when Anton and I met on Tinder in 2017. I was living in Lisbon at the time and he was visiting from Sweden. Anton wasn’t one of those guys who was looking to date a drag queen—that’s definitely a thing—but he thought it was fun. My drag persona is Miss Moço. A lot of queens are more is more, but her look is more fashion-forward businesswoman. She’s no nonsense, a bit dry. Once Anton and I were a couple, he helped me put Miss Moço’s looks together. He would go shopping for new clothes or come along to the show and carry her bags. But he never expressed any interest in doing drag himself.

We moved to Toronto in 2018; the arts and the drag scenes in particular were a draw. I grew up in Cambridge, so it was a homecoming for me. We moved into an apartment at College and Lansdowne, and last year we opened Miss Pippa’s, a flower shop and wine bar nearby. Like a lot of people in the restaurant industry, we shut down last week. Since then, we’ve been stuck in our apartment, trying not to stress too much about our financial future and watching waaaaay too much Netflix.

So that’s where we were about 10 days ago: lying on the couch, polishing off another British mystery series, and about to get ready for bed. We were talking about what we were going to do the next day, and I said, “Maybe I should do your makeup.”

To say Anton was into the idea would be an understatement. He put it in his calendar for the next day at 2 p.m.—like we’re so busy! When the time came, we put on a playlist of Eurovision finalists, I drank some wine and we got started. I’m not used to doing other people’s makeup, so it was a bit of a challenge. Anton’s face and colouring are different from mine: Miss Moço likes a dark, smoky eye, but Anton has these bright bluey-green eyes, so I did something a little lighter. His face is already quite feminine. And his lips! Not like I’m jealous or anything. After I’d finished the makeup, Anton looked in the mirror and his drag alter ego just emerged. She chose a long black wig—I have about 22 of them—and put on a stretchy black dress. We don’t wear the same size, so her options were limited. A lot of queens use pads to create curves, and for whatever reason, Anton was very drawn to this hip padding that I had in my closet but never used.  The look was kind of Kardashian meets Elvira meets Betty Boop. And the personality! My god, this girl was something totally different: bubbly, flirty, prone to very loud “whoop” sounds. It’s why we chose the name Anita Moment. As in, I need a moment. Because, well, she is clearly ready for hers!

If you had told me about Anita a month ago, I never would have believed it. Like I said—no interest! The things you get up to when you’re stuck at home for days on end. We cleaned our house from top to bottom. We watched a million shows and movies. And then we made a drag queen. At first we were just entertaining ourselves, but then I posted a video on my Instagram stories. People liked it, and Anita really liked the attention.

By this point, I’d already cancelled my weekly drag brunch at the Gladstone, which was tough. I knew some queens were doing virtual shows, but I didn’t think I could perform without a live audience. Anyone who has seen my show knows that it’s alllll about interacting with the audience and making those physical connections. You can’t exactly straddle an unsuspecting audience member on FaceTime. But when Miss Anita came along and we started developing our banter I thought, Okay, maybe we’ve got something here.

We did a live virtual drag brunch on Sunday. It was like my usual act, with some alterations. I did a few lip syncs: “And I Am Telling You” from Dreamgirls and Christina Aguilera’s “Let There Be Love.” We got a request for “A Little Bit Alexis,” the song from Schitt’s Creek. (I actually performed that song for Annie Murphy, who plays Alexis, at a party over the holidays). I even drew a mural of a streetcar on my wall so I could do a streetcar headstand, which is one of my signature moves at the Gladstone brunch (I usually do it with an actual streetcar). Miss Anita was great too. Anton trained as an opera singer as a kid, so she did a performance of “Memory” from Cats. But I only let her have one song—Miss Moço is no fool.

New to the scene, Anita Moment is ready to take Toronto by storm 💨

It was a huge success, and a lot of people sent us tips online, which was nice. We’re going to do it again next weekend, and we’ve got some surprises planned. It’s been great to have a new project to focus on while we’re all doing our best to stay positive. Miss Moço is a working girl. She just wants to work. And Anita, well, let’s just say I’m glad she doesn’t know how to do her own makeup.