Regent Park’s oldest residential buildings have been around since the 1960s, but won’t be for much longer. The wave of modernization in this downtown neighbourhood—characterized by its focus on low-income family housing—began back in 2010. Toronto-bred photographer Jesse Colin Jackson, who lived in Regent Park before moving to L.A. six years ago, has spent the past decade capturing the area’s transformation. As a former architect with a focus on architectural photography, he was granted access to one building in particular, 14 Blevins Place, to document its unusual layout in the days leading up to its demolition in 2015.

Constructed by modernist Canadian architect Peter Davidson, 14 Blevins Place was a rare example of skip stop housing—an apartment building in which the elevators only stopped every three or so floors, requiring tenants to disembark either above or below their units and access them by stairs. In return for this somewhat awkward floor plan, tenants got larger units that spanned the width of the building, with views in both directions. However, because most dwellings could only be reached by stairwells, skip stop housing became both an accessibility nightmare and a violation of contemporary fire codes. Jackson considers this an important lesson in architectural theory: while removing one third of an apartment building’s hallways to create more liveable space seemed revolutionary on blueprint paper, it ended up making tenants’ everyday lives more difficult.

In Skip Stop, showing at the Pari Nadimi Gallery until July 20, he exhibits images of 14 Blevins Place alongside ones depicting a larger cycle of construction and destruction in Regent Park. “Fifty years from now, we’ll be looking at the demolition of today’s new buildings,” Jackson says. “We often forget this when we build new buildings. They last just long enough that we think they’ll last forever.” 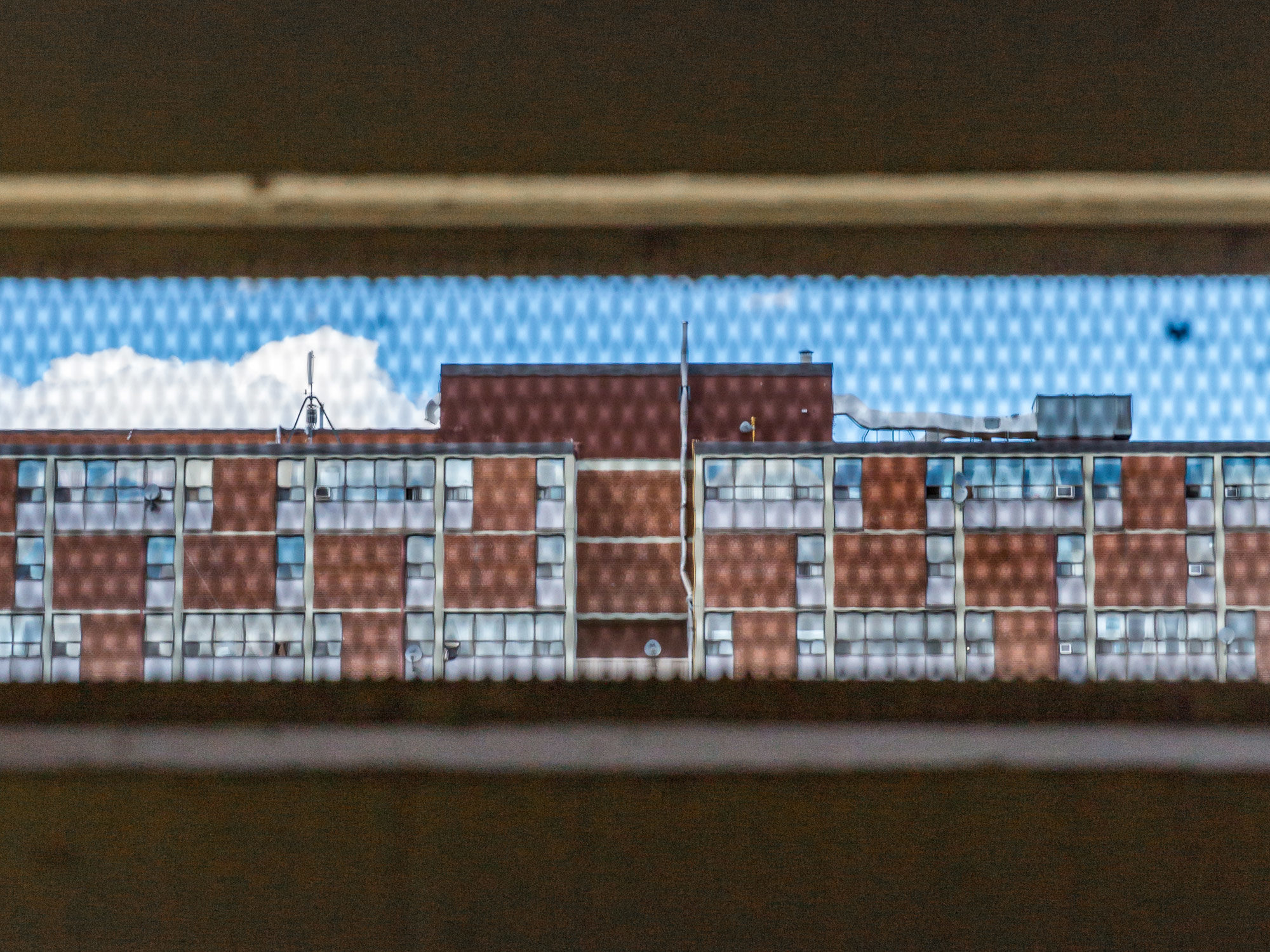 One tenet of Dickinson’s mid-century modernist architecture was to have a building’s facade show what was going on inside it, which accounts for the irregular pattern of the skip stop building’s exterior: the hallway and stairwell floors have mostly brick exteriors, while the living space exteriors are all windows. 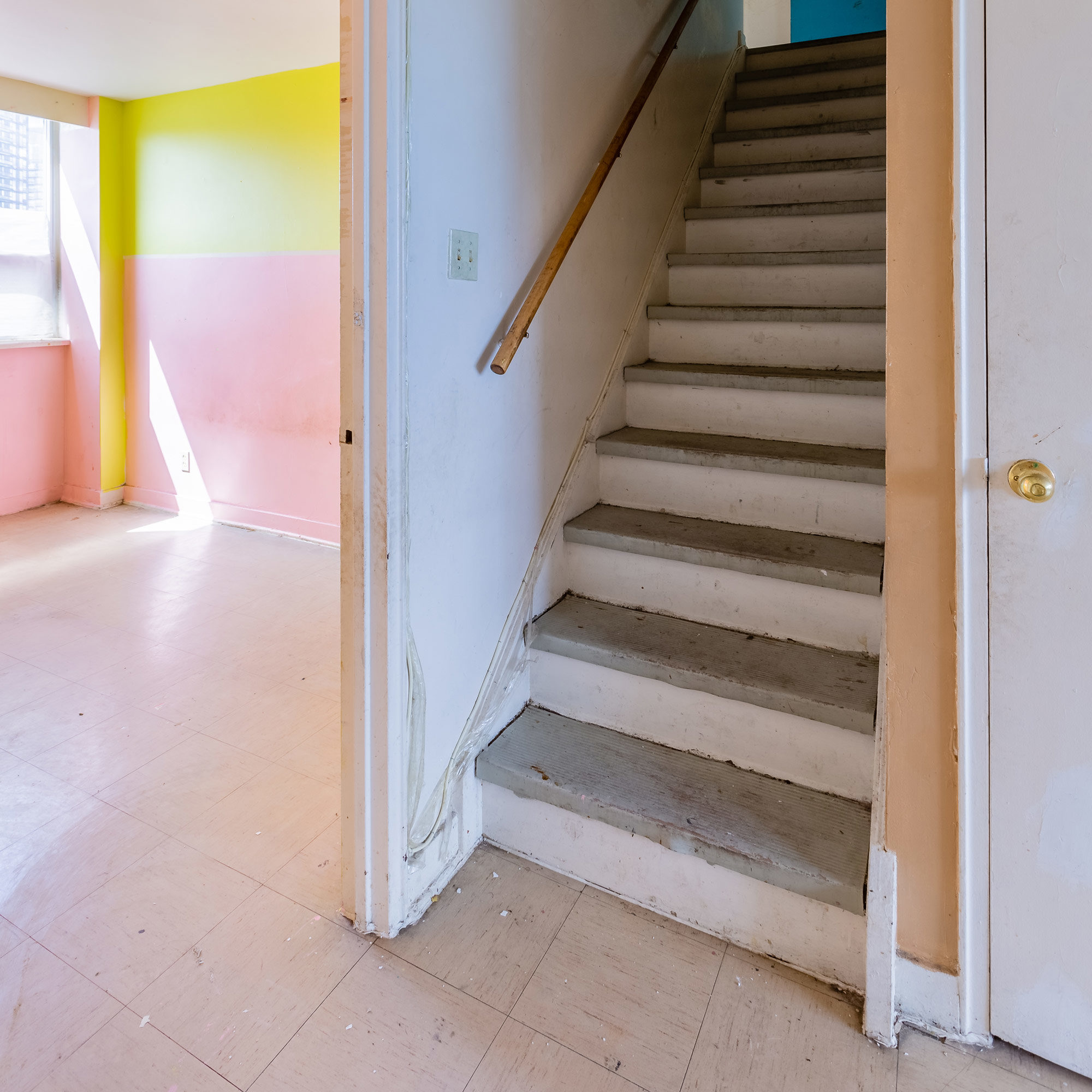 Fourteen Blevins was considered for designation as a heritage site due to its uncommon layout, which was far more architecturally innovative than most other community housing in Toronto. But during this process, residents testified about the difficulties of having a narrow stairway as a central feature of their unit, so it was scheduled for demolition, instead. 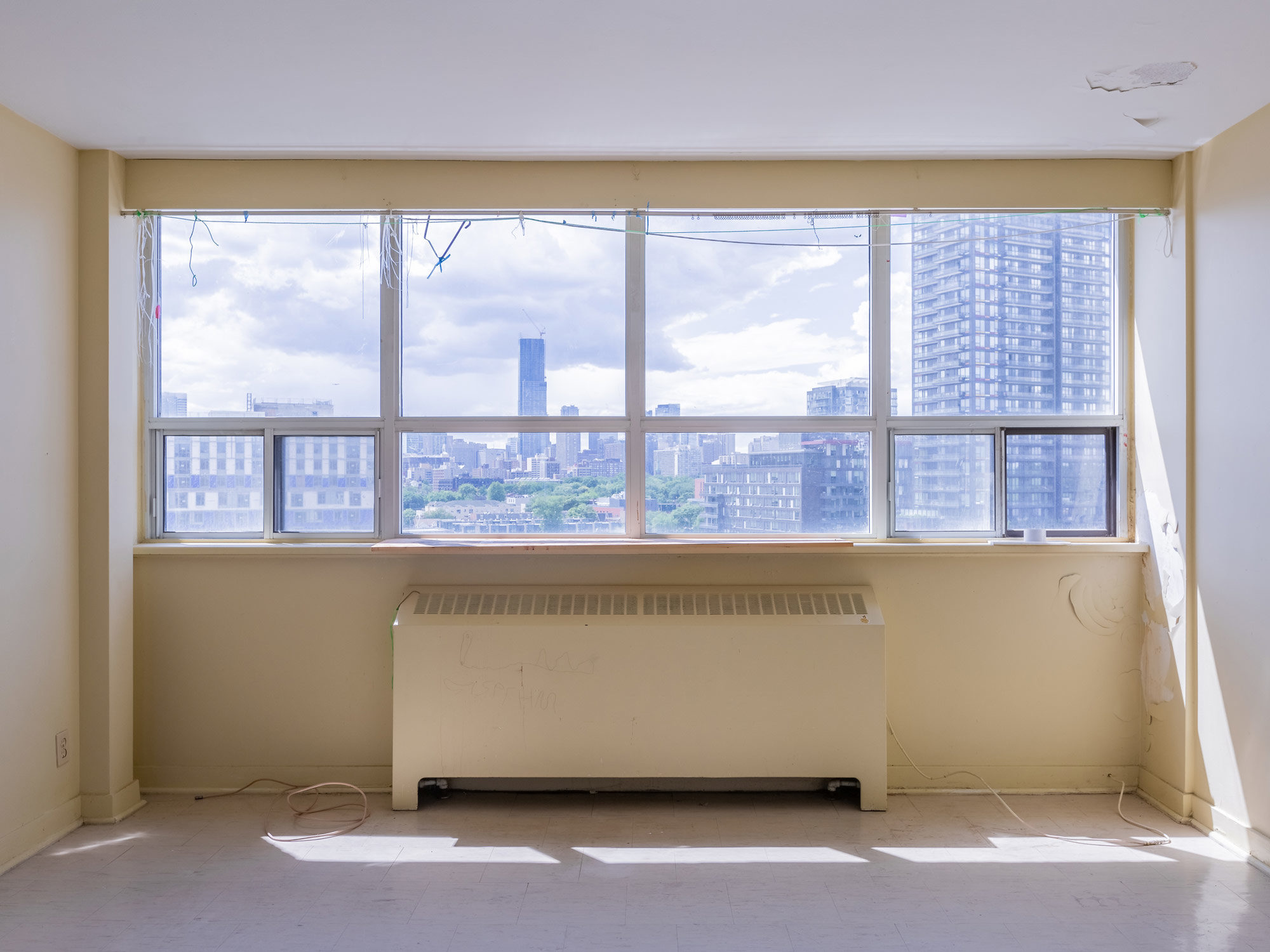 The one thing residents unanimously praised were the views. “When you think about how expensive Toronto real estate is now, it’s impossible to imagine renting an affordable unit with views of the north and south—that’s reserved for penthouses.” Jackson says. “But in this building, you could see the entire city through your windows in every single unit.” Most tenants paid rent-geared-to-income, meaning 30 per cent of their monthly paycheque. 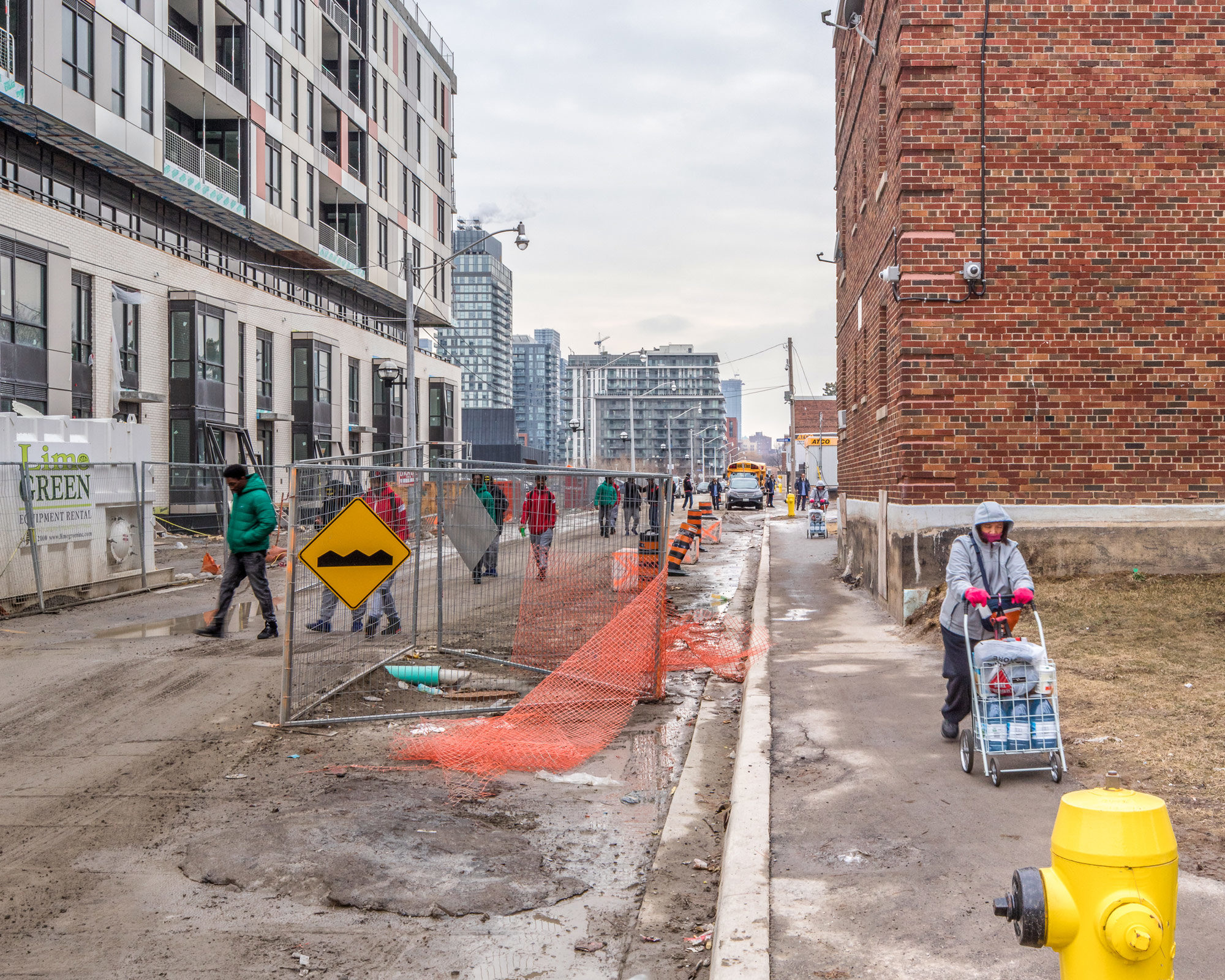 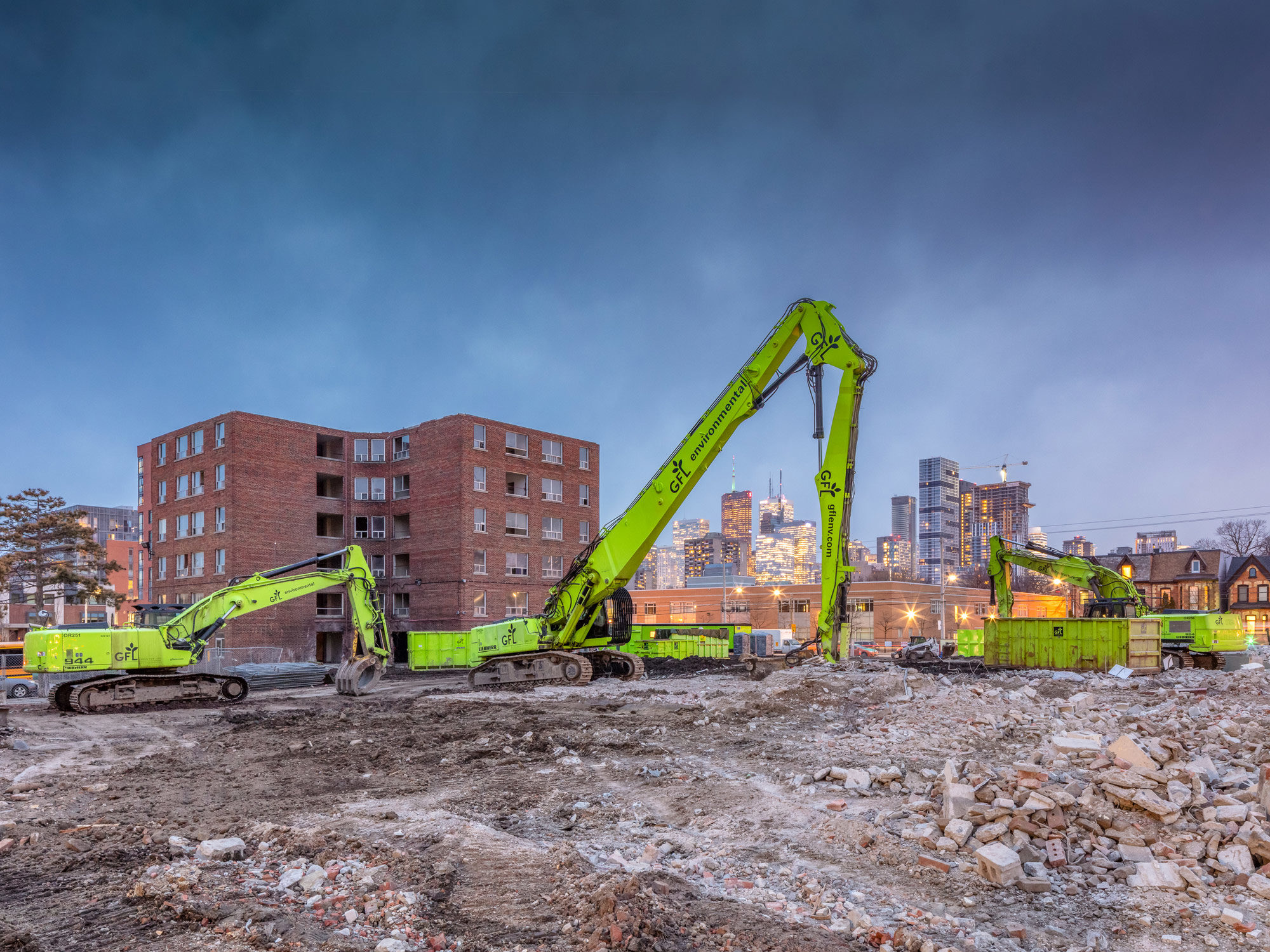 This shot depicts the aftermath of the March 2019 demolition of an apartment building at Parliament and Gerrard. 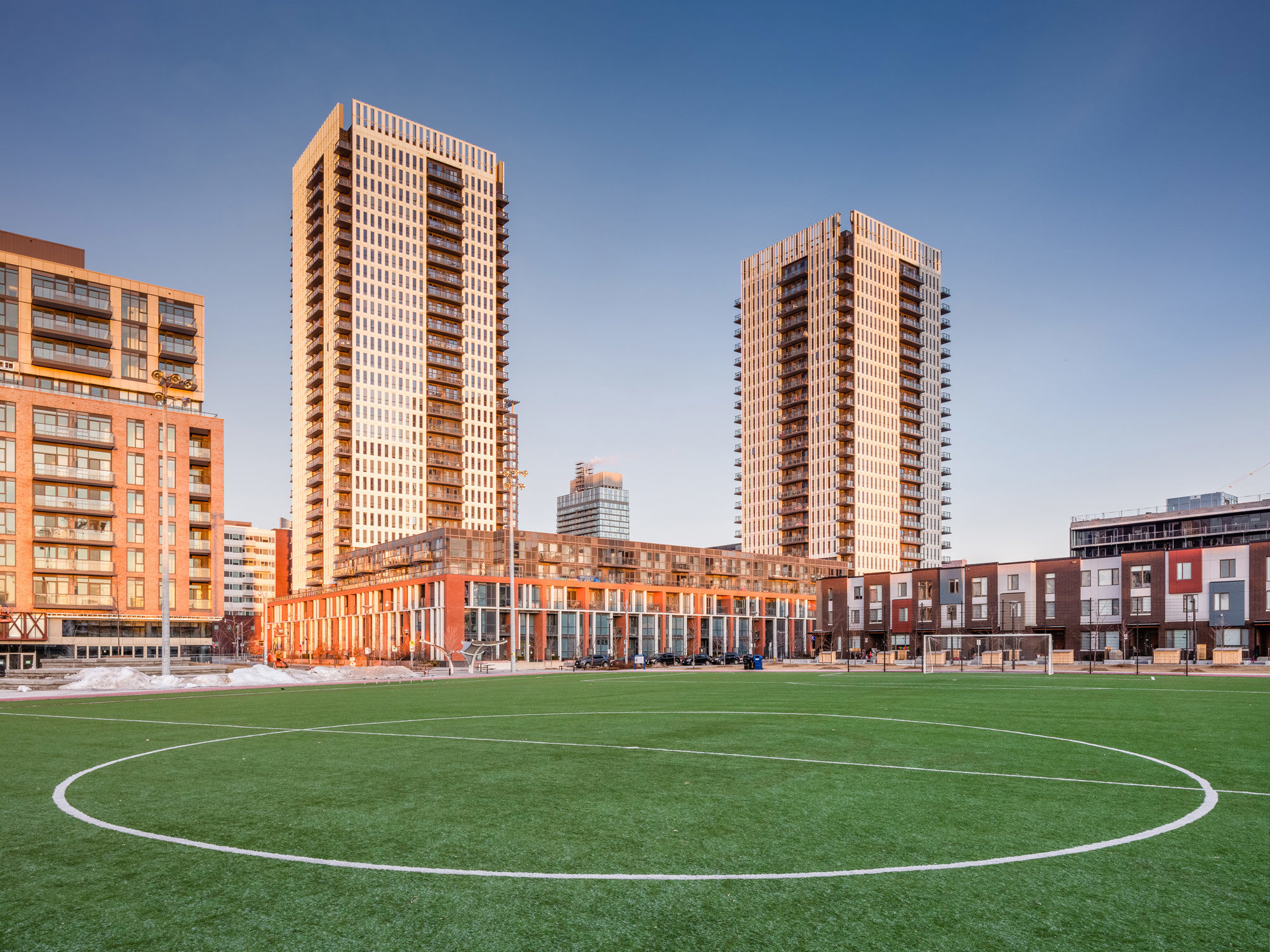 These are two of the neighbourhood’s newest towers—stylish condos where a studio unit goes for $1,800 a month. The spread of market-priced housing within Regent Park has led to an identity crisis for the neighbourhood, particularly as affordable housing supply fails to meet growing demand. Last year, nearly 3,000 Torontonians participated in a lottery for the mere 75 units of community housing available. In Jackson’s exhibition, this image and the previous one will be placed next to each other, representing what he calls “the dusk and dawn of Regent Park.”