The must-read Toronto books of 2016

The must-read Toronto books of 2016

Treasure Island in Parkdale, a look back at My So Called Life and a quest to act in Life of Pi—these are some of the best homegrown books of the past year By André Alexis
Alexis followed up his Giller Prize–winning Fifteen Dogs with this clever mystery inspired by Treasure Island. When a wealthy father passes away, he leaves a strange object for each of his five children. One of them, Willow, enlists the help of Tancred, a notorious thief, to steal her siblings’ objects in order to solve the puzzle of her father’s inheritance. It’s a classic quest tale, updated with local flavour (it’s set in Parkdale) and modern complications (heroin addiction). Coach House.

The Best Kind of People By Zoe Whittall
When a beloved prep-school teacher is arrested for sexual assault, his family must deal with the consequences: their comfortable, small-town life is upended, his wife becomes socially isolated, and his teenage daughter quickly transforms from class president to drug-using misfit. Whittall reportedly worked on this novel for six years, and the care comes through in the prose. House of Anansi. By Luc Chamberland and Seth
The National Film Board recently created a documentary about acclaimed Canadian cartoonist Seth. This companion book features essays, comics, sketchbook pages, illustrations and more, weaving art and biography to provide insight into one of the country’s most creative minds. Drawn and Quarterly.

In My Humble Opinion: My So Called Life By Soraya Roberts
The subject matter might seem a little niche—My So Called Life only lasted one season in the mid-’90s. But given MSCL’s cult legacy, this book will resonate with more than a few sardonic Gen Xers. In My Humble Opinion is the latest in ECW’s Pop Classics series (joining books on the likes of Twin Peaks, Nicolas Cage and Showgirls), a series of critical celebrations of pop culture. ECW Press. By Lisa Robertson
The New York Times described Robertson’s poetry as “dauntlessly intellectual”; the Village Voice calls it “seductive.” This latest collection covers abstract and visceral themes, including mortality, the form of time, and the relationship between body and mind. Coach House.

The Elephants in My Backyard By Rajiv Surendra
Surendra is known more as the rapping mathlete Kevin Gnapoor from Mean Girls than he is for his literary prowess. He sets out to change that with this ambitious, absurd memoir. He comically chronicles his obsession with Yann Martel’s prizewinning novel Life of Pi, and his ensuing quest to play the role of Pi in the film adaptation. Penguin Random House. By Jowita Bydlowska
Women love Guy, but not half as much as he loves himself. On the surface, he’s a charming, funny, successful talent agent who dates models and pop stars. Under that thin veneer, he’s a vain, manipulative, lying snob. Byklowska paints a convincing portrait of the modern misogynist in a novel full of hilarious and disturbingly realistic detail. Wolsak and Wynn.

Brown: What Being Brown in the World Today Means (To Everyone) By Kamal Al-Solaylee
Al-Solaylee spent two years reporting on the stories of people with brown-coloured skin in 10 different countries, covering issues like immigration, workers’ rights and his own experiences of growing up brown in a white world. The stunning result has already found a spot on a number of year-end best-of lists and was shortlisted for the Giller non-fiction award. Harper Collins.

The Revenge of Analog By David Sax
We live in an age where we can fit our entire music library on a cellphone. Yet somehow record players, indie stores and vintage technologies are experiencing a renaissance. Sax explores the relationships people have with physical art, interviewing shop owners and film aficionados across the country about the limits of digital living. Public Affairs. 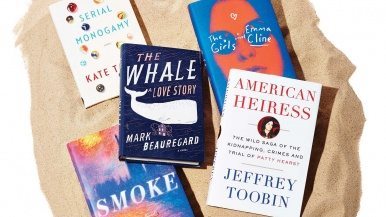 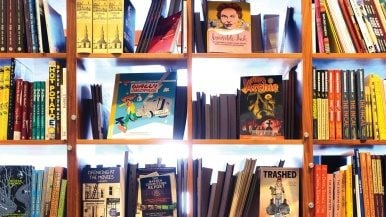