Over the weekend, half a dozen steel lifeguard stations on Woodbine Beach transformed into giant works of public art as part of the fifth annual Winter Stations design competition. Local and international designers, artists and architects created colourful, thoughtful installations on the theme of migration, ranging from a riff on Trump’s proposed border wall to the mass migration of Canada’s Monarch butterflies. Here’s a closer look at this year’s winners:

Every year, the Monarch butterfly treks more than 4,000 kilometres from Canada to Mexico—the longest migration in the world. This  installation, made using 51 sheets of plywood cut into wing-shaped pieces, was inspired by the forests in Michoacán, Mexico, where millions of butterflies land for the winter months. It takes approximately four generations of butterflies to complete the round trip, so the artist, Luis Enrique Hernandez, used four different shades of orange as a tribute to the winged insects. 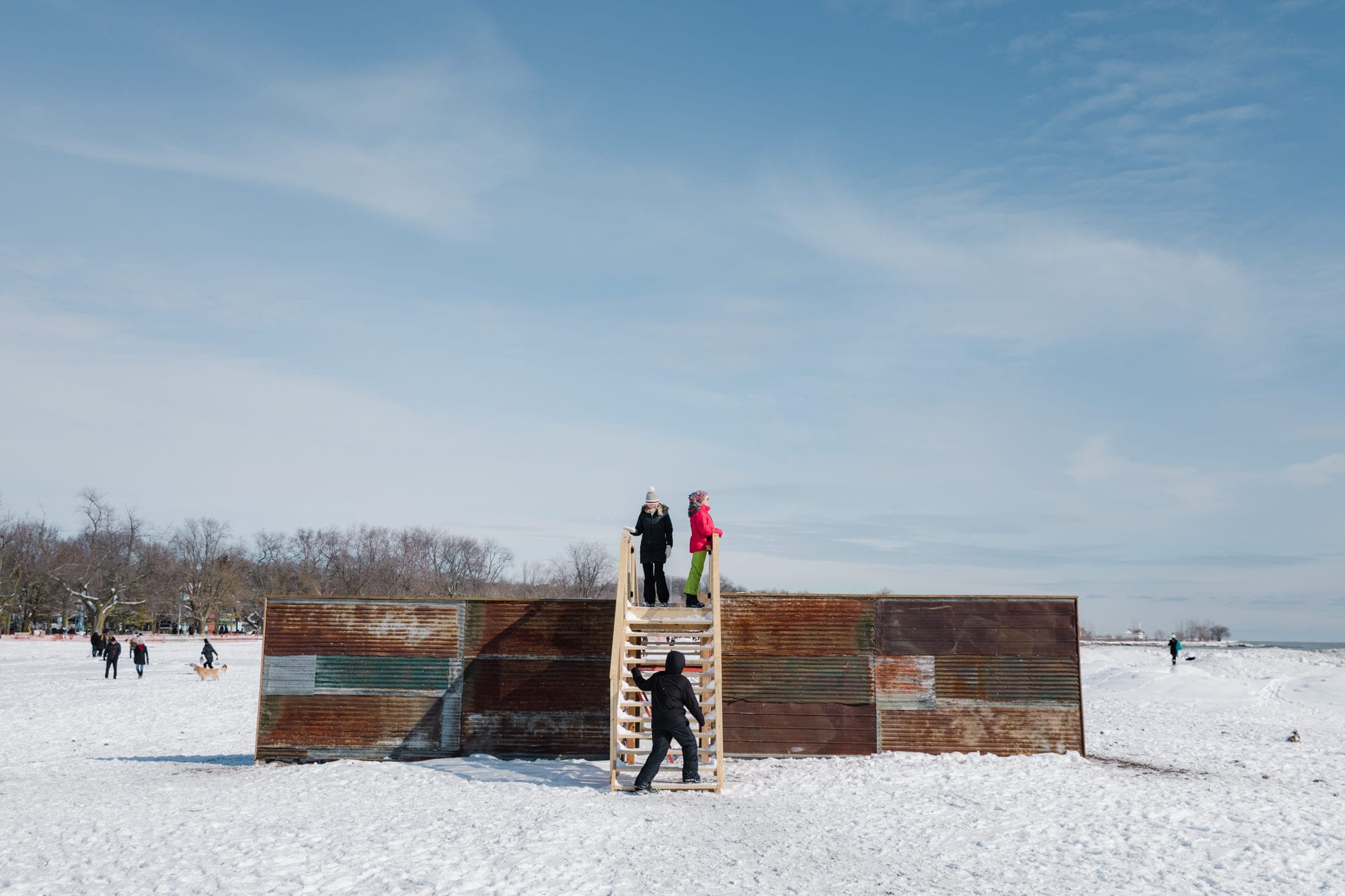 American artists Joshua Carel and Adelle York were inspired by Trump’s proposed wall along the Mexican-American border. But this wall is about connection, rather than isolation: visitors are encouraged to climb the adjoining staircases and strike up a conversation with whoever is on the other side. The exchange is supposed to represent how countries should be encouraging migration and collaboration instead of separation. The wall was built using metal paneling and the stairs are made of wood. 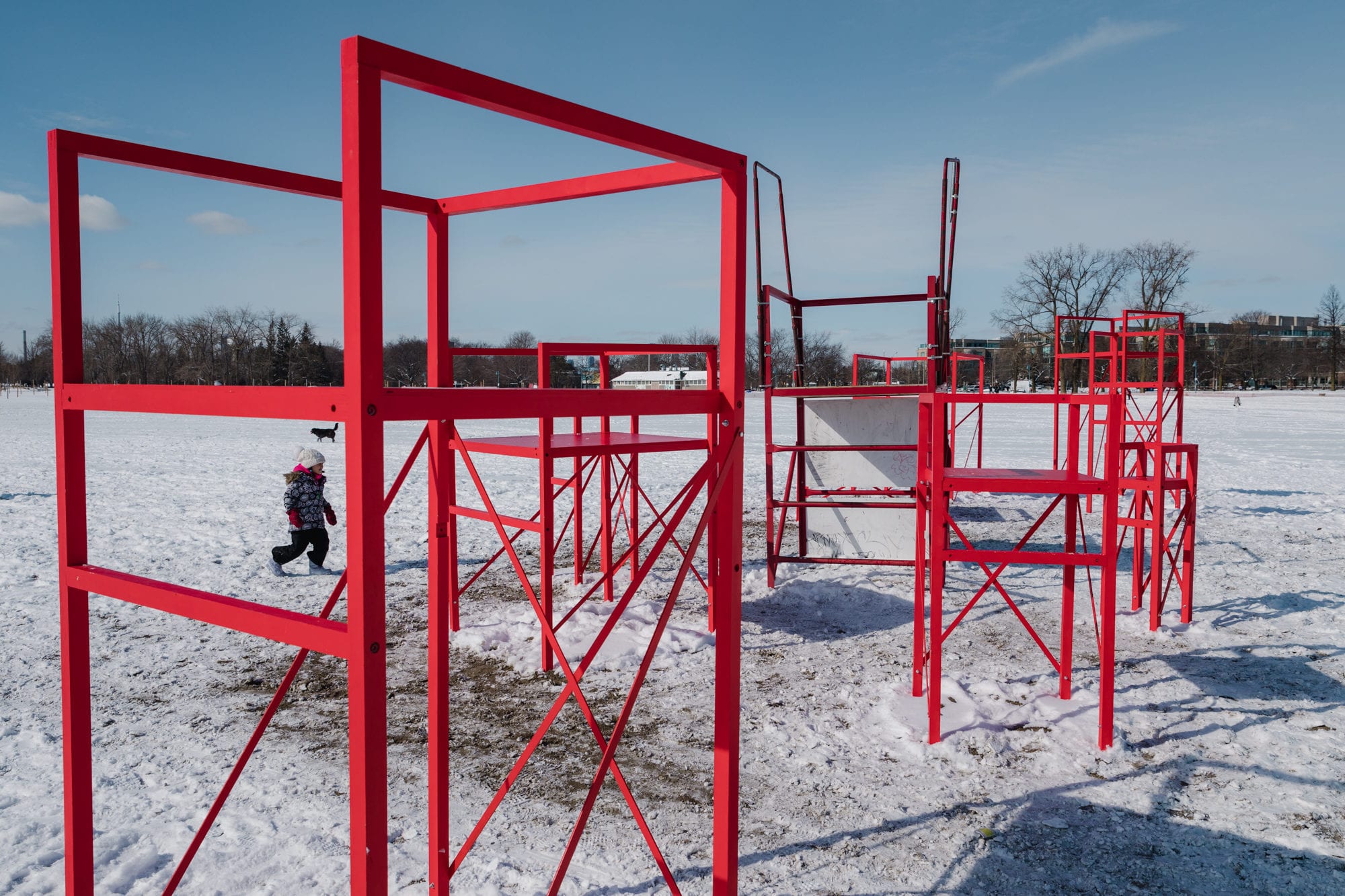 A herd of beasts

In this installation, students at Sheridan re-imagined the lifeguard towers as a group of abstract, geometric animals. They played with the proportions of the original structures, stretching, shrinking and distorting them to create a diverse cast of species (spectators can decide which ones they’re looking at). 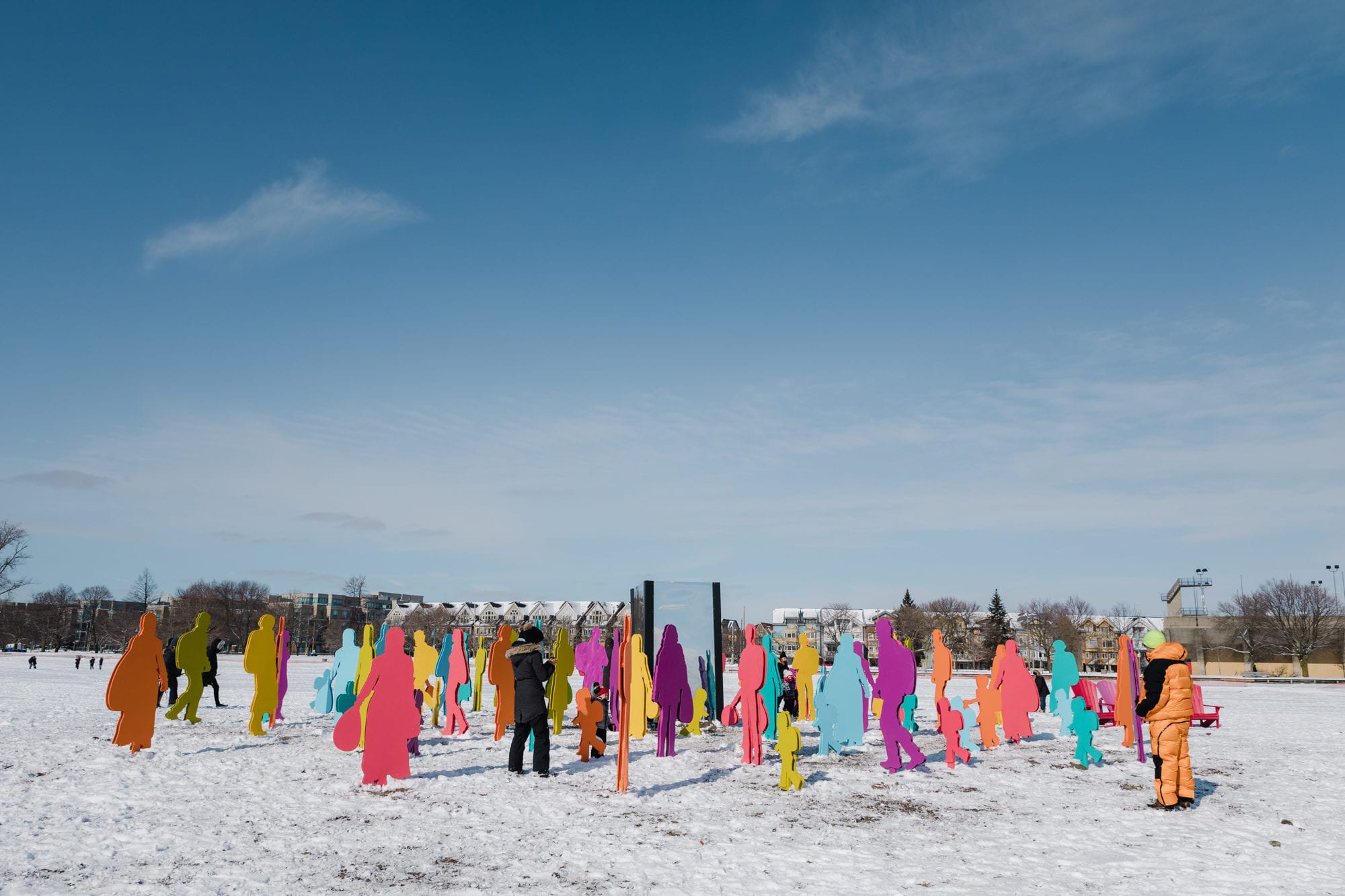 Victor Perez-Amado, an assistant professor of architecture and urbanism at U of T, used painted plywood to create these colourfully diverse human forms. Visitors can join the installation by standing near the mirrored booth in the centre of the crowd. (It’s also a great photo-op.) 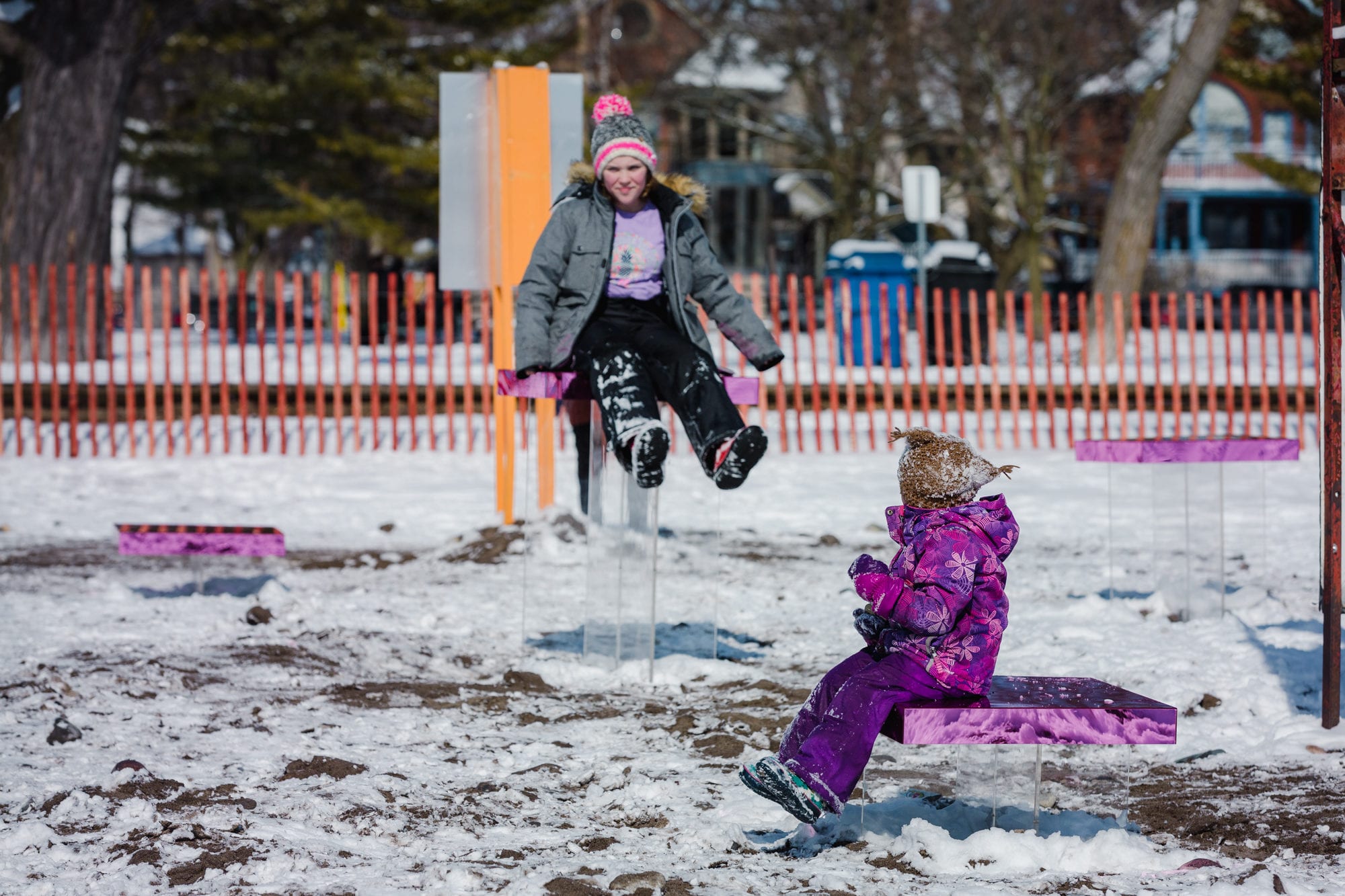 This installation is made up of a collection of reflective pink platforms that start at the boardwalk and lead all the way out to the edge of the water. They vary in height, and visitors are encouraged to navigate the path without touching the sand. The artists from Humber College used climate change as inspiration for the design: the layout represents the melting glacier landscape, which could lead to an environmental migrant crisis. 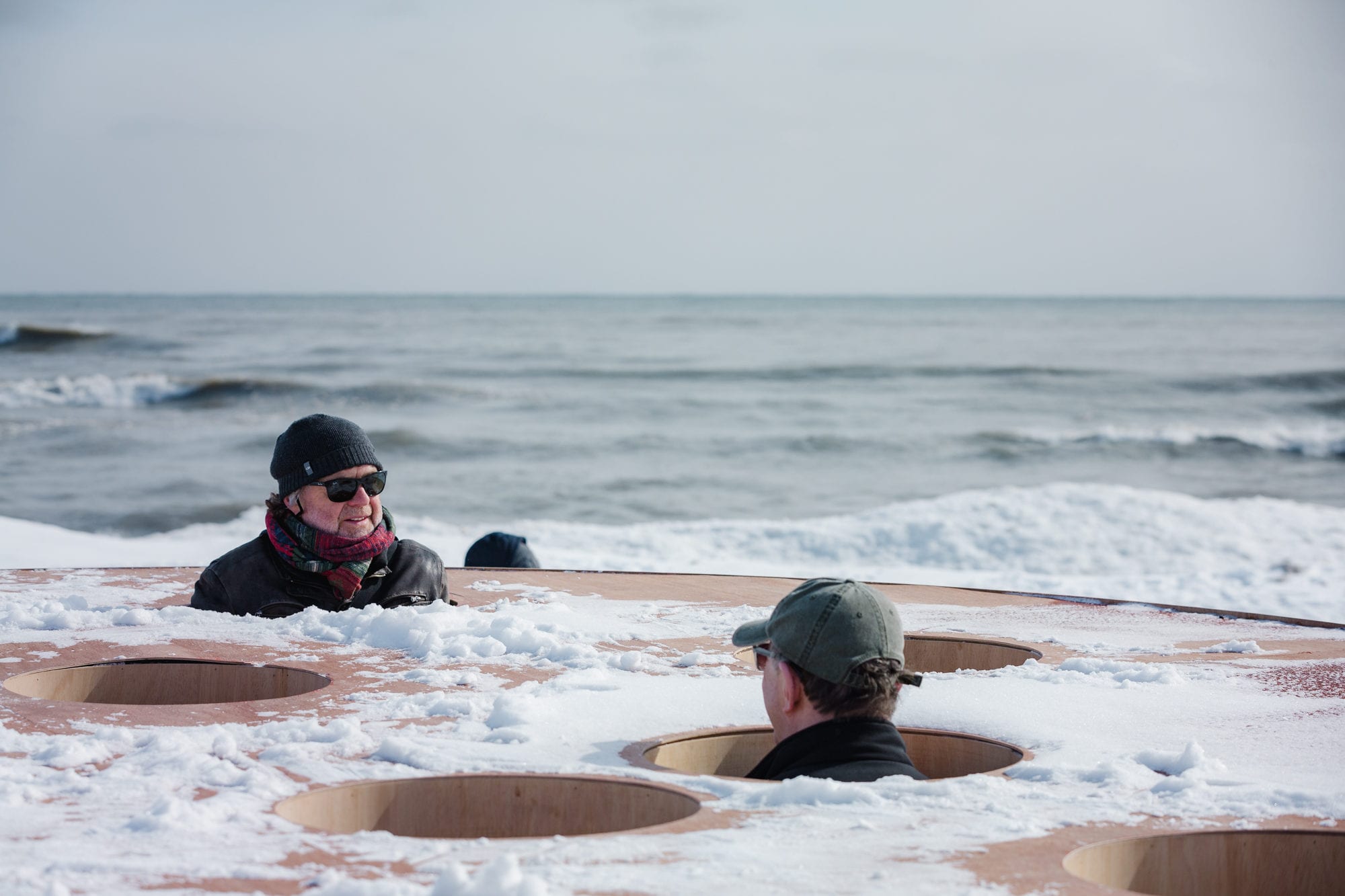 This installation looks like a super-sized Whac-A-Mole. The circular pavilion has a door on the size and several body-sized holes in the top. Visitors can enter the cylinder, pick a pedestal and poke their head up to the surface. Anyone inside the installation is encouraged to introduce themselves to the floating head beside them.