It’s been a long, strange trip for Banksy. The anonymous British street artist, once the scourge of the police, now finds himself the subject of a blockbuster exhibition valued at $35 million. The Art of Banksy, which occupies a renovated warehouse on Sterling Road, features more than 80 of the artist’s multimedia works—the largest collection ever exhibited.

So, is Banksy selling out? Not exactly. The exhibit isn’t his doing, but that of Steve Lazarides, who was the artist’s long-time agent until the two fell out in 2008. Since then, Lazarides has continued to curate shows and broker sales of Banksy’s work internationally. The exhibition showcases the range of Banksy’s talents, including paintings, prints, sculptures, and photographs, and offers a rare opportunity to assess his sledgehammer wit in a gallery setting.

The show runs until July 11 at 213 Sterling Road. We asked Lazarides to take us on a tour through the exhibition and discuss some of his favourite Banksy pieces. 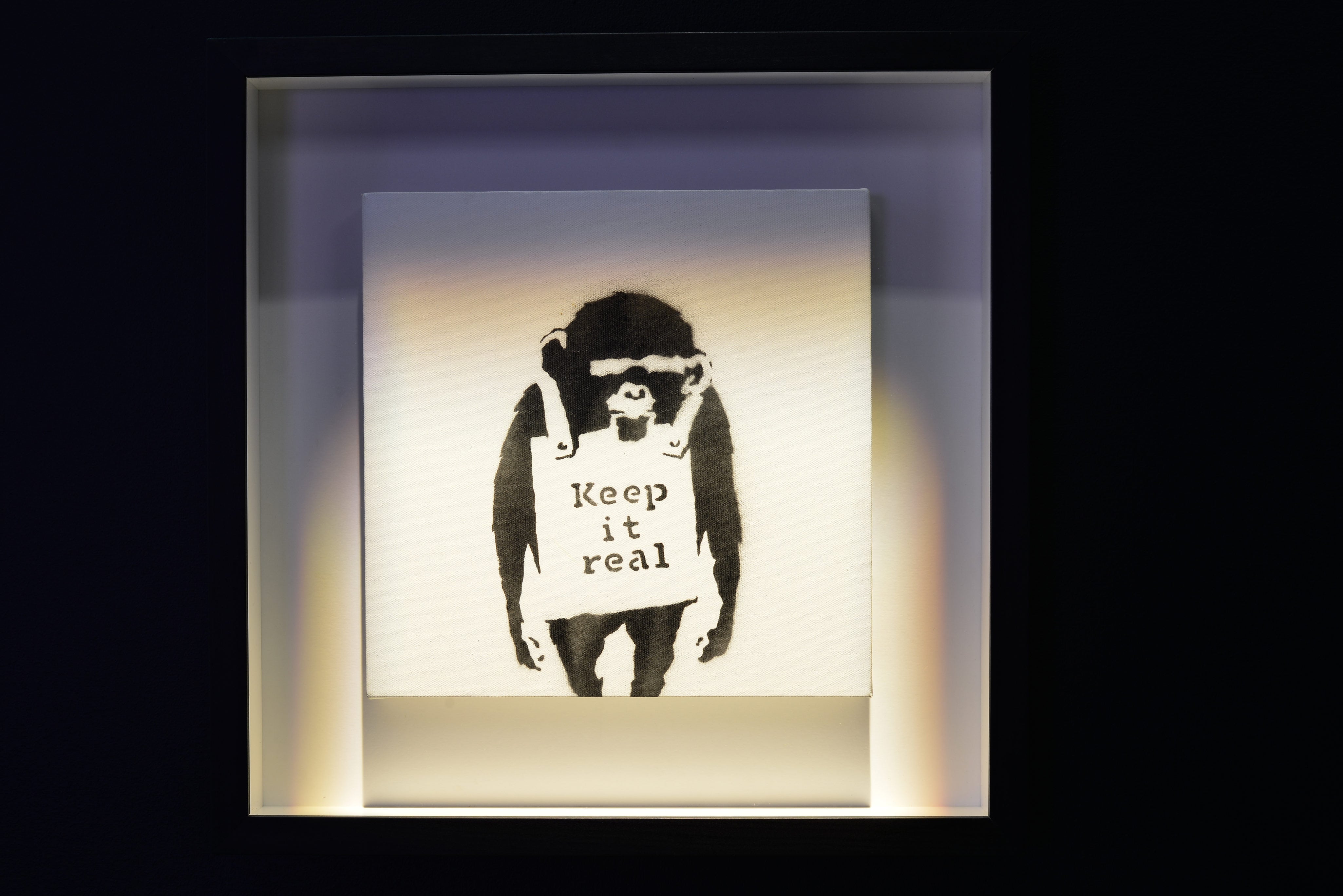 This despairing image of a chimpanzee with a vacuous slogan was one of Banksy’s earliest and more ubiquitous street pieces, created in 2002. He repurposed it in many future works. “It’s one of the pieces I remember seeing on the streets of Bristol and London,” says Lazarides. “It’s one of the things that helped bring him to the forefront of the general population.” 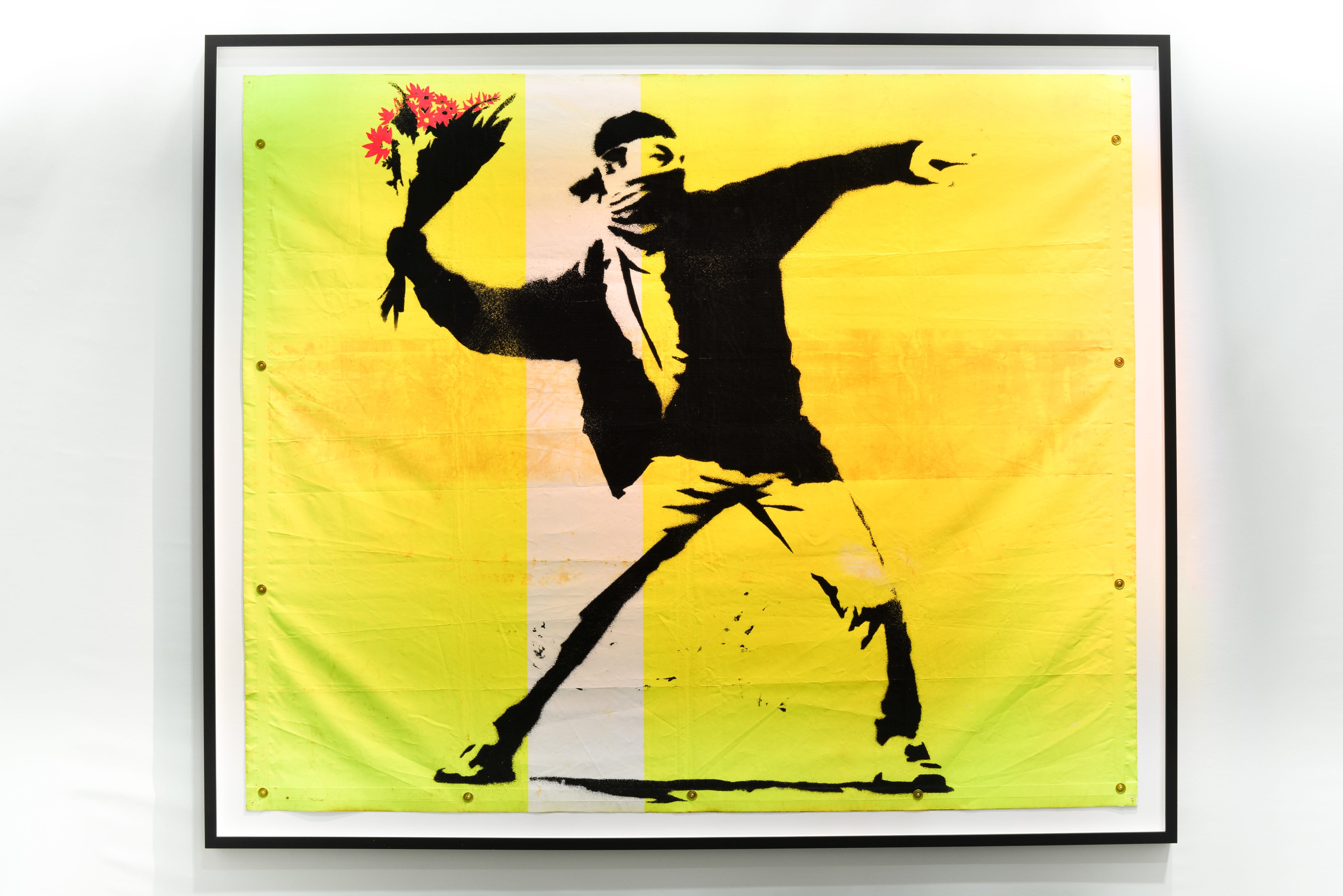 One of Banksy’s most iconic images, this 2005 piece was also one of the first pieces Lazarides saw Banksy work on. “I remember going to his studio many years ago, and that motif made up part of a much larger painting,” he remembers. Banksy extracted the image and developed it as a stencil before it became the over of his 2007 book Wall and Piece.

According to Lazarides, this is one of Banksy’s most overlooked images, paying melancholy tribute to the small British town of Weston-super-Mare. “Weston-super-Mare is a small, dead seaside town not far from Bristol where old people go to die, basically,” says Lazarides. “I’m sure you’ve got some of those in Canada, too.” 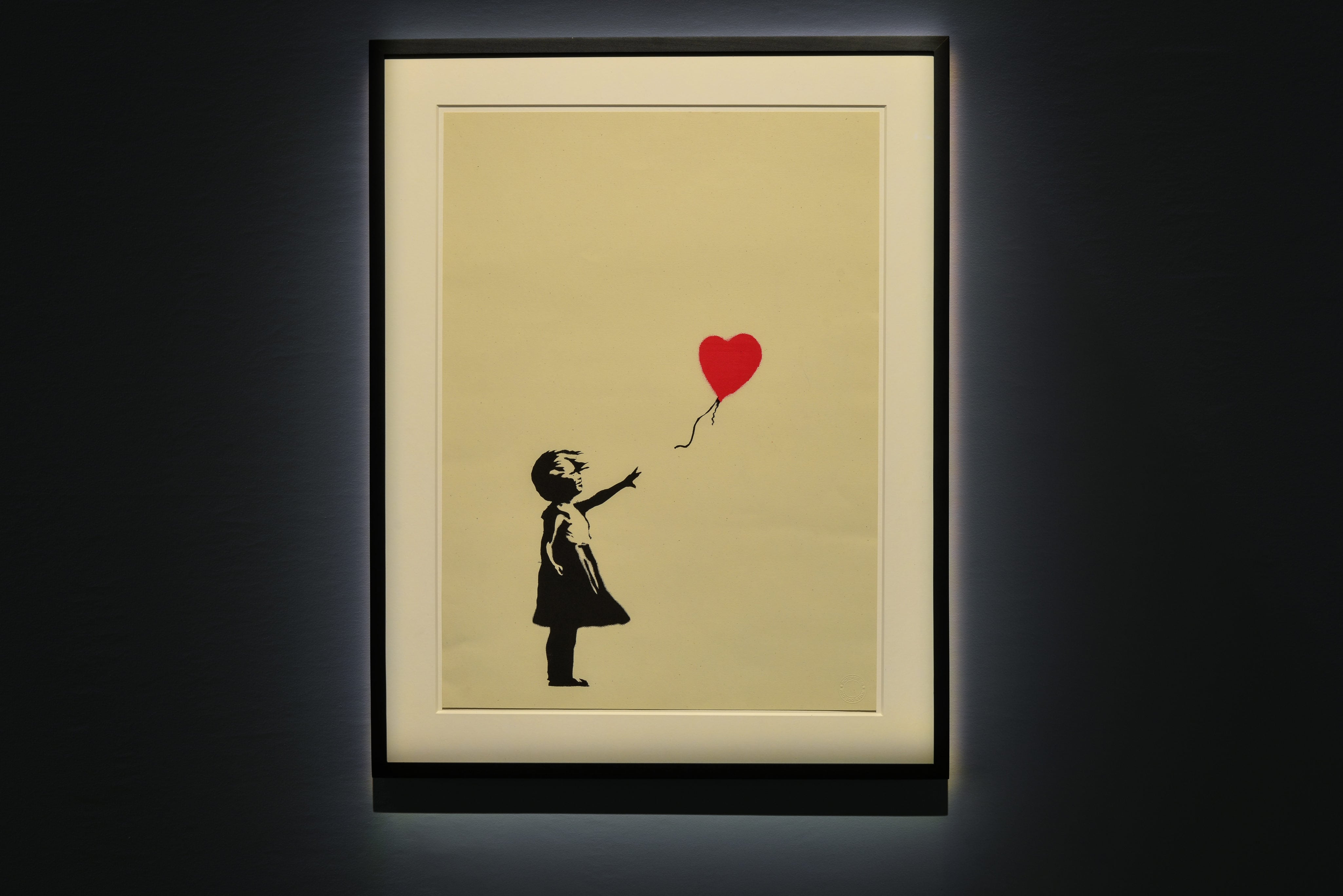 “Happy Choppers” and “Girl with Balloon”

“It’s very strange, because over the years, different prints gather momentum with the general public,” says Lazarides. Created during the American war in Afghanistan, ‘Happy Choppers’ was once one of Banksy’s most-referenced pieces. “At the time, that was way more popular than the ‘Girl and Balloon’ image—then years later, the ‘Girl and Balloon’ image became more popular.” 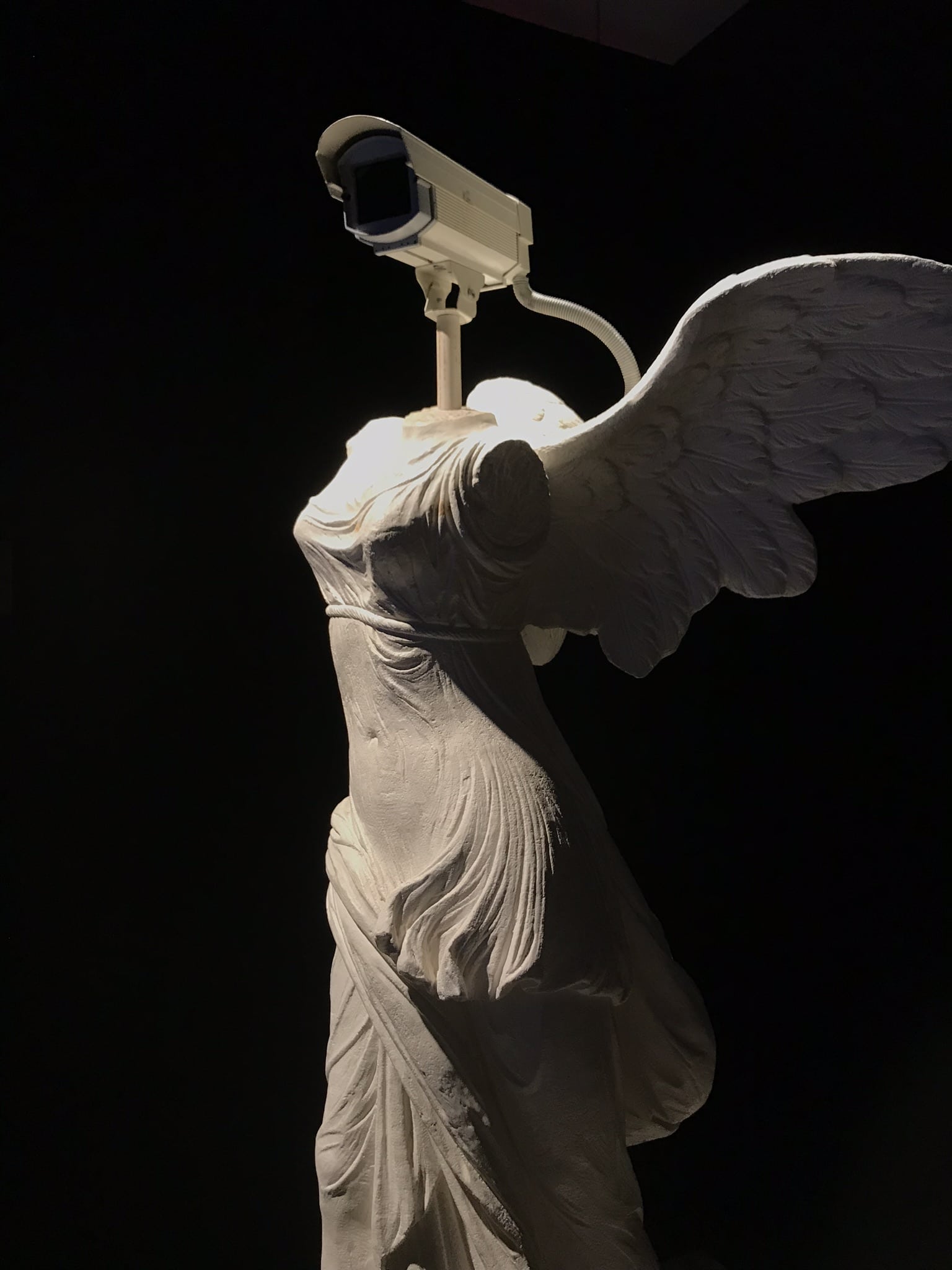 The CCTV Angel, which films viewers at the entrance, explores Banksy’s career-long concern about the surveillance state. It also showcases the range of his artistic ambitions. “It shows people that he uses more than one medium: he’s a sculptor as well as a painter, and an interventionist who can cross all sorts of boundaries as far as his medium is concerned,” says Lazarides. 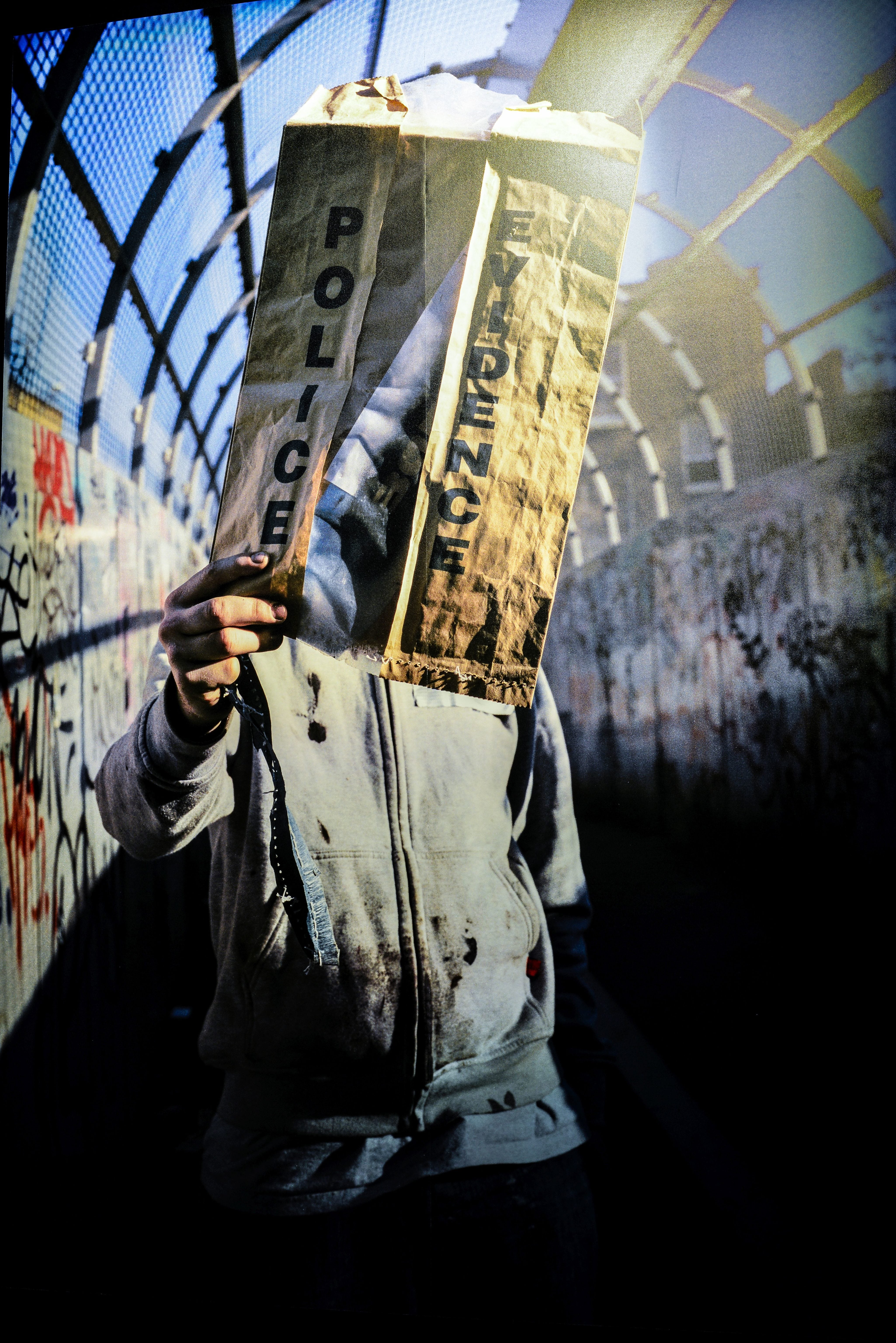 Banksy’s anonymity is both a practical necessity and a savvy career-move. This photo of him hiding behind a police evidence bag shows the artist having fun with his image. “It sums up his career more than anything: it’s been cat-and-mouse with the police, the media, and the general public now for almost 20 years, and it’s a battle he seems to be winning.” 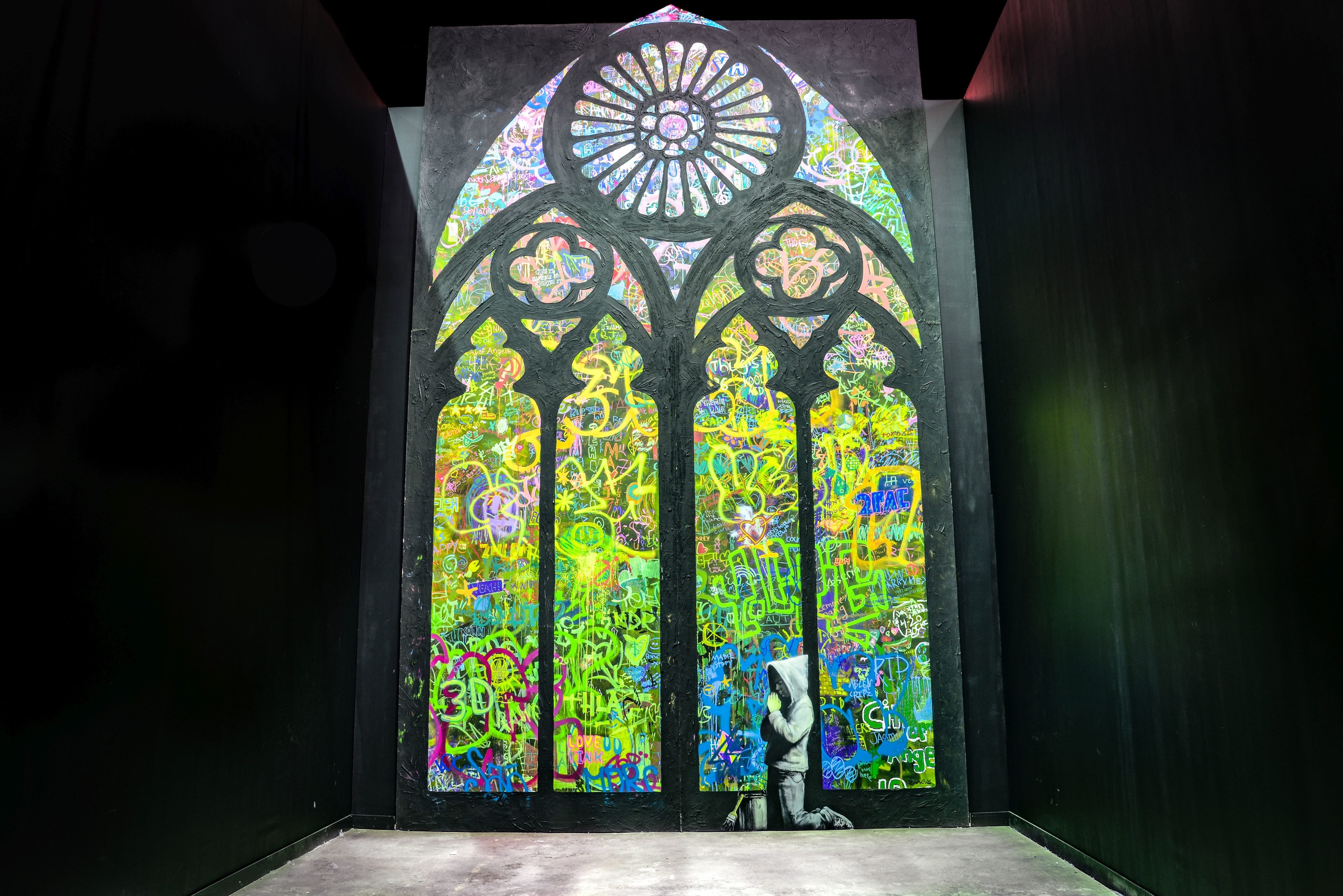 At seven metres high, this is one of Banksy’s biggest works. It’s also one of his most elusive. “It hasn’t been seen in public since its outing at the MOCA museum in Los Angeles back in 2008,” says Lazarides. That, he says, was the exhibition that turned Banksy into a superstar. “It’s a beautiful, beautiful piece.”