In the past few years, virtual reality has transformed from a purely hypothetical sci-fi fantasia into a billion-dollar industry. And Canadian companies are getting in on the action. In Toronto, a virtual reality pop-up movie theatre at the indie art gallery Milk Glass allows viewers to step inside The Matrix. A Montreal company has created the world’s first VR roller coaster, steep and swooping enough to rival the Behemoth at Canada’s Wonderland. And a Markham startup called Sulon builds wireless VR headsets that allow you to blend virtual reality with, well, reality. 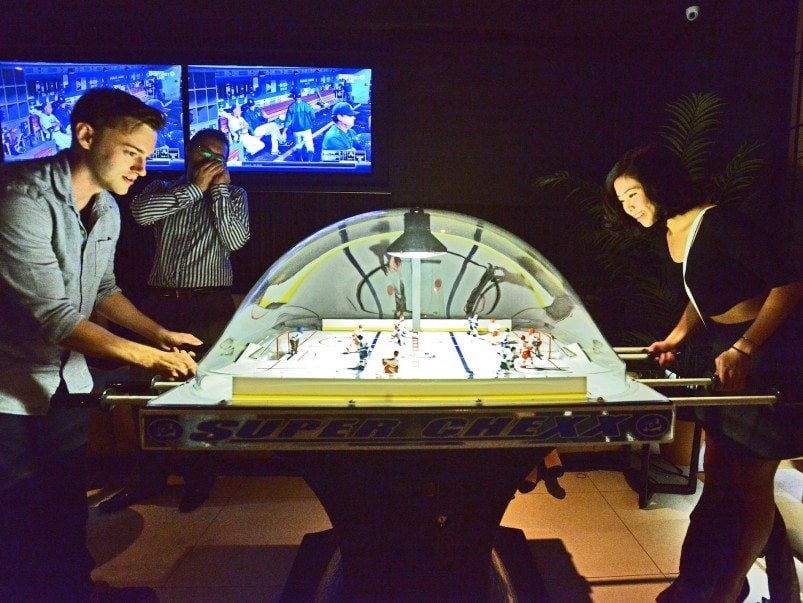 The latest amusement park for all things virtual reality is Ctrl V, a new arcade in Kitchener-Waterloo devoted to the kind of immersive gaming that makes you feel like you’re trapped in a David Cronenberg movie (and we mean that in the best possible way).

CEO Ryan Brooks is a middle-school substitute teacher who has been obsessed with virtual reality for the past decade. Last year, he realized that the technology is still too bulky and expensive for people to trick out their rec rooms with hallucinogenic hardware, so he decided to open a spot where they could experience VR at an affordable rate. He teamed up with two longtime friends: Robert Bruski, the company’s CFO, is a veteran business guy who has dabbled in financial tech, film and startups, while James Elligson, the COO, is a gemologist by trade. “It’s a new frontier of gaming. We needed to figure out how to monetize this,” Bruski says. The trio took over an old Blackberry building next door to the University of Waterloo and transformed it into a futuristic dreamscape straight out of Tron, with blue lights and eight-by-10 chambers decked out with top-line VR equipment: in each one, you might spot someone screaming, running, swimming or ducking. The headsets are HTC Vive models, equipped with 32 sensors, a front-facing immersive camera, high-definition graphics, 360-degree motion tracking and hand-held controllers. You can rent a gaming station for $25 an hour or book the place for birthdays and bachelor parties, and later this month, kids can attend a week-long VR camp where they’ll learn how to code and develop virtual reality games. After two months, the team has already received franchising requests from all over North America, Australia and Dubai. The arcade currently carries a roster of 15 immersive games. The most popular options are first-person shooters like Snow Fortress (a snowball fight with digital snowmen) and archery and slingshot games. For groups of friends, CloudLands Miniature Golf is a popular pick, because it lets you see your pals in the world of the game.

Bruski’s favourites are the horror games, which place the player in a virtual funhouse. In Affected: The Manor, for example, you walk through a haunted mansion full of flashing lights, slamming doors and possessed dolls with spinning heads. The Brookhaven Experiment, meanwhile, takes place after an abandoned lab melts down, and a mob of mutant zombies chase after you. “We’ve had people come out dripping with sweat because they’re so scared,” Bruski says. “One woman was cowering in tears.”

Younger players might prefer some of the more educational options, like Job Simulator, which lets kids play grown-up as chefs, auto mechanics and cubicle workers. And Universal Sandbox2 is a space simulator, mimicking real gravity, climate and physics to allow players to build their own planets, moons and solar systems. “We had a boy with a disability come in, and the game made him feel like he could fly,” Bruski says. “It was the coolest thing.”

This post has been updated from its original version.