A look inside Toronto’s Bridgerton Experience

A look inside Toronto’s Bridgerton Experience

Including stunning decor, acrobatic performances, period garb and a chance to be noticed by the Queen 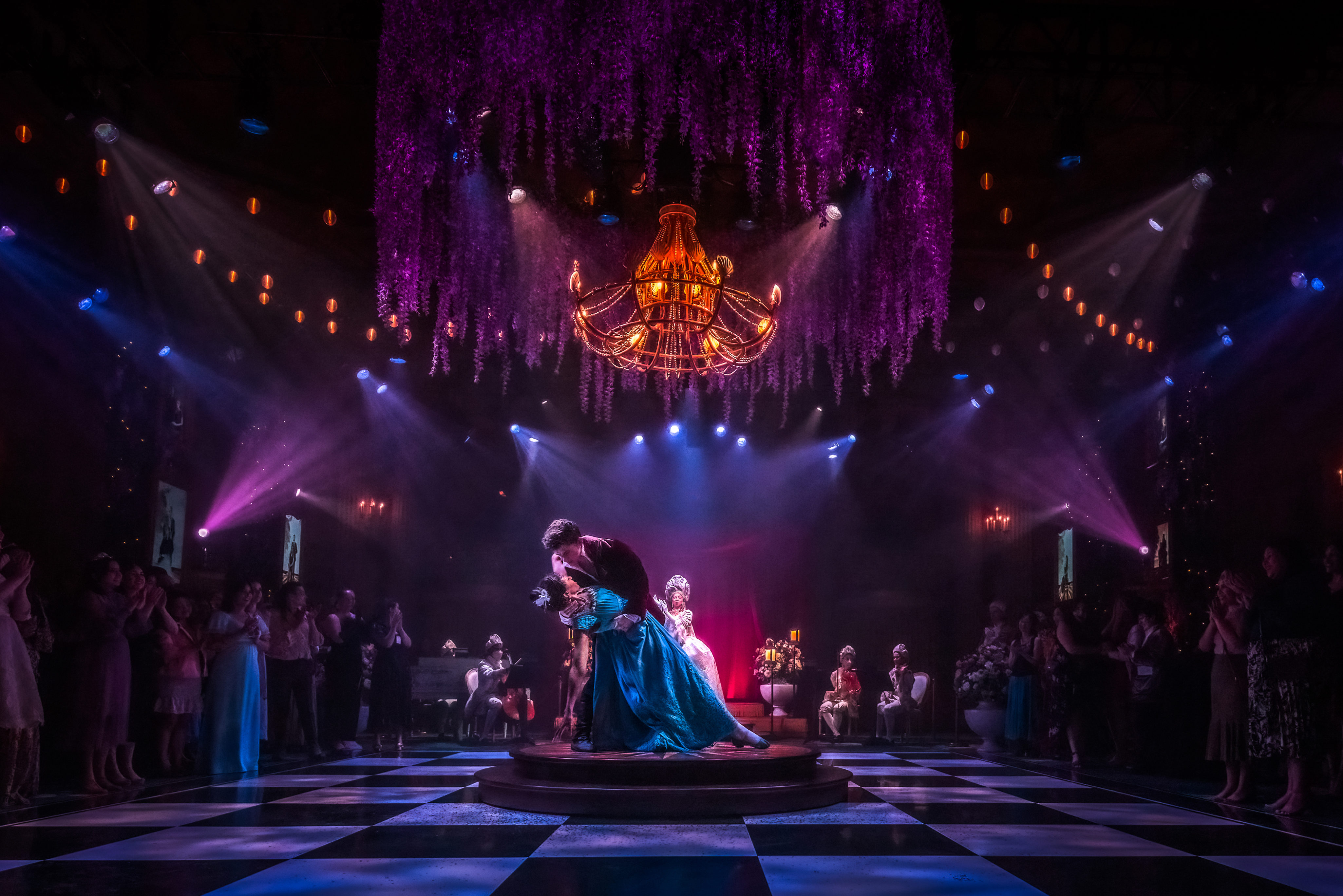 Dearest reader, I have good news! After popular runs in cities like Montreal, Los Angeles and Chicago, The Queen’s Ball: A Bridgerton Experience has arrived in Toronto. If, like many, you were hooked on the Shonda Rhimes Netflix show, you’ll want to check out the 90-minute immersive event. It’s filled with dancing, cocktails, interactive performances and plenty of photo opportunities. The experience transports fans of Bridgerton into the hit series’ Regency-era world through one of its lavish balls. And, if you’re dressed up and really in character, you might even be picked as the Queen’s diamond—a highly sought-after distinction.

The Queen’s Ball is located at Netflix’s Toronto production office, near Cherry Beach, where one of the massive sound stages has been transformed into a ballroom. Note: this part of town isn’t easily transit accessible or walkable, especially if you plan on going all out with a Regency-period costume (pointed-toe high heels included).

General admission for the experience starts at $54 per person. VIP admission, which gets you priority entry, a complimentary glass of champagne, access to the exclusive VIP seating area and 20 per cent off merchandise, starts at $96. Though prices vary depending on the date—sessions run from Wednesdays to Sundays—and group discounts are available.

Here’s a sneak peek into the Bridgerton Experience, in town until December 4. 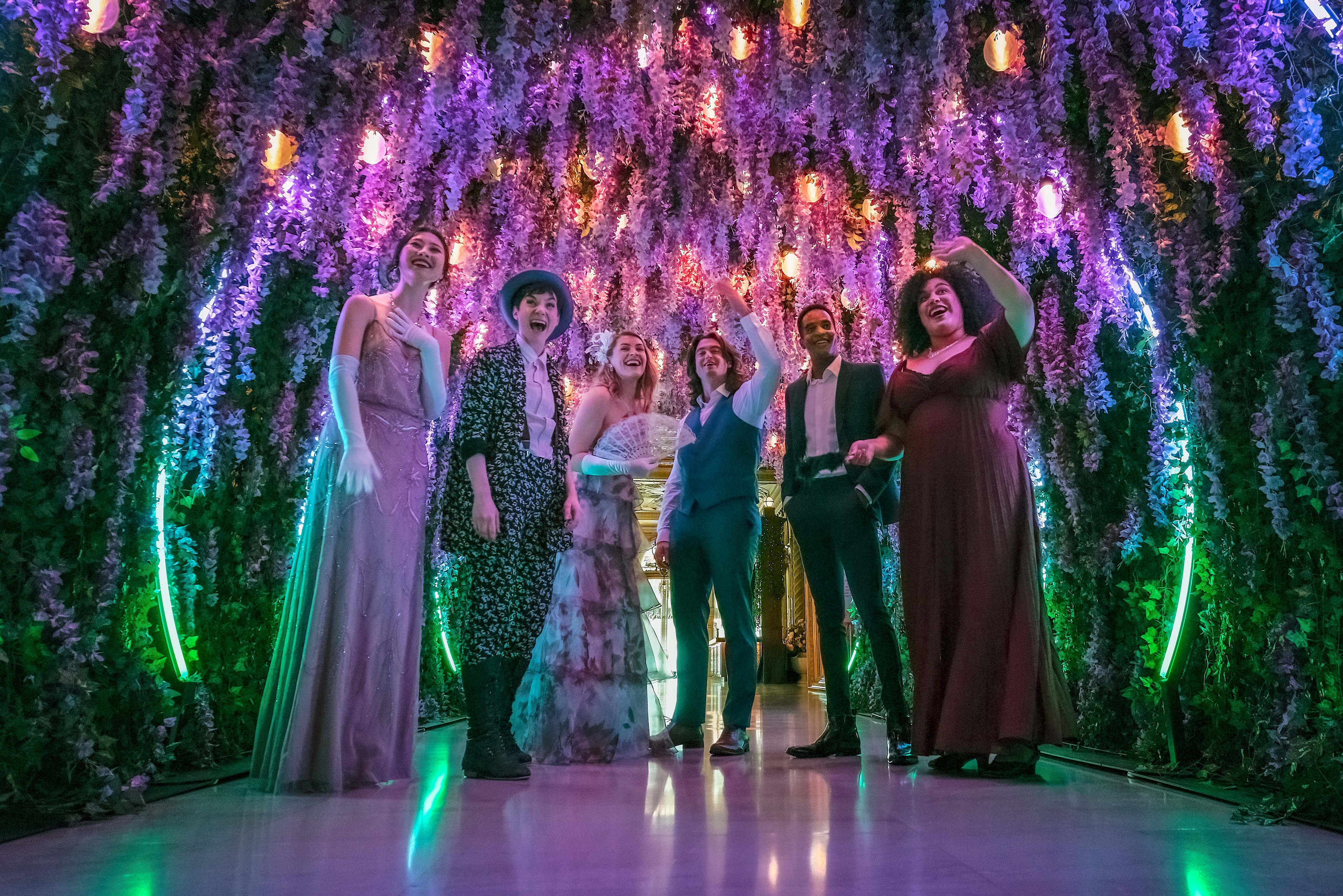 A grand entrance
Upon entering the venue, the first room has merchandise for sale, a display showcasing the Duke and Daphne’s iconic outfits from the first season, a cocktail bar, and a photo-friendly replica of the windows in the Bridgerton family home. From there, guests walk through a wisteria tunnel reminiscent of the beautiful climbing lavender flowers that grow on the fictional family’s residence. At the end of the tunnel, one of the Queen’s footmen hands out copies of the latest Lady Whistledown—or, as fans know it, the gossip rag. The paper serves as a program for the night, with some backstory on the performances soon to come. 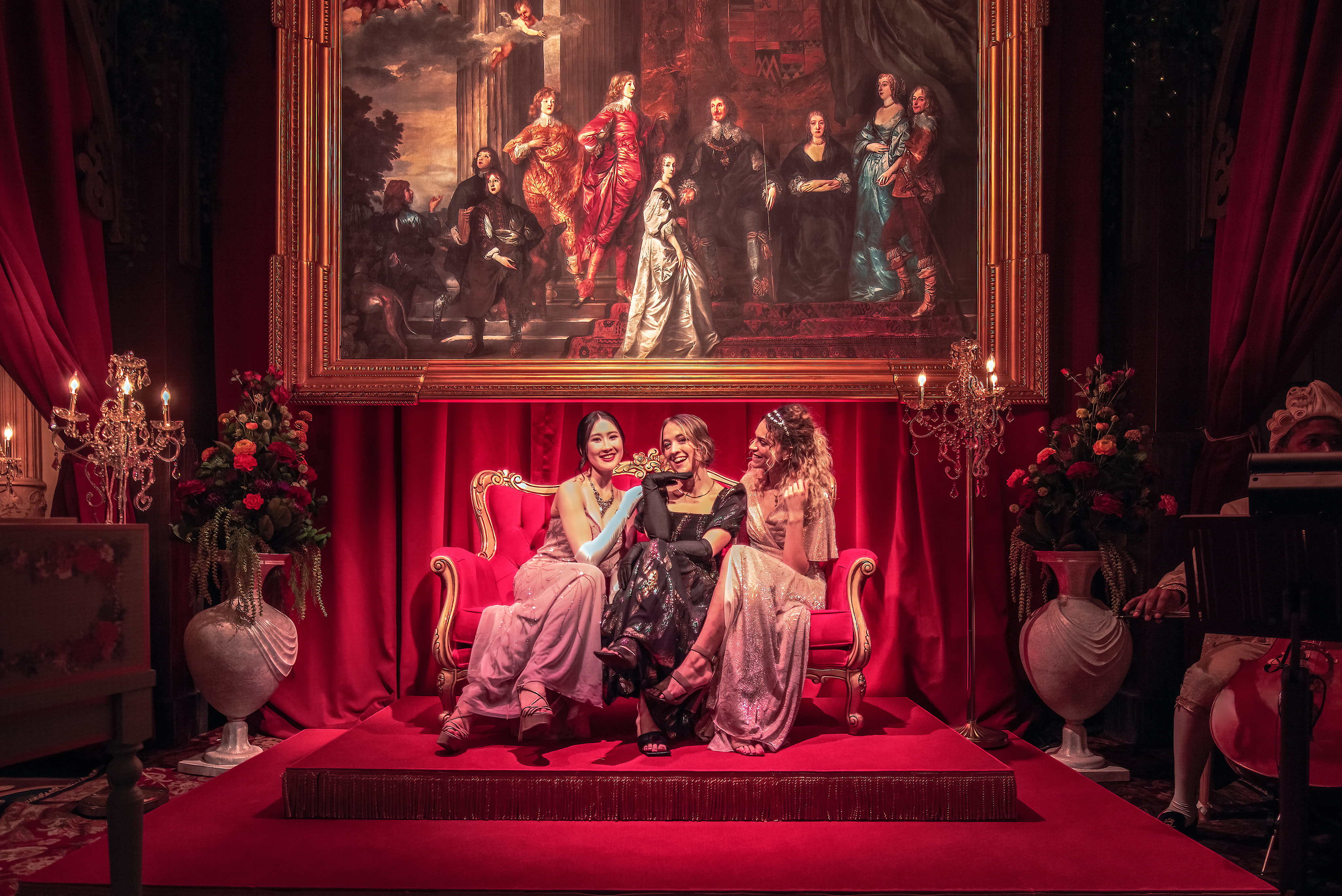 The Queen’s ballroom
The Queen’s ballroom is extravagantly decorated with rich red carpets and flower arrangements. There’s a golden throne on one side, the VIP seating area on the other and a massive dance floor in the middle that’s designed to look like a chessboard. Before the Queen herself arrives, actors in costume, who play a significant part during the evening, mingle with guests. They talk excitedly about the social season ahead and speculate on who might be the diamond of the ball this round (more on this later). 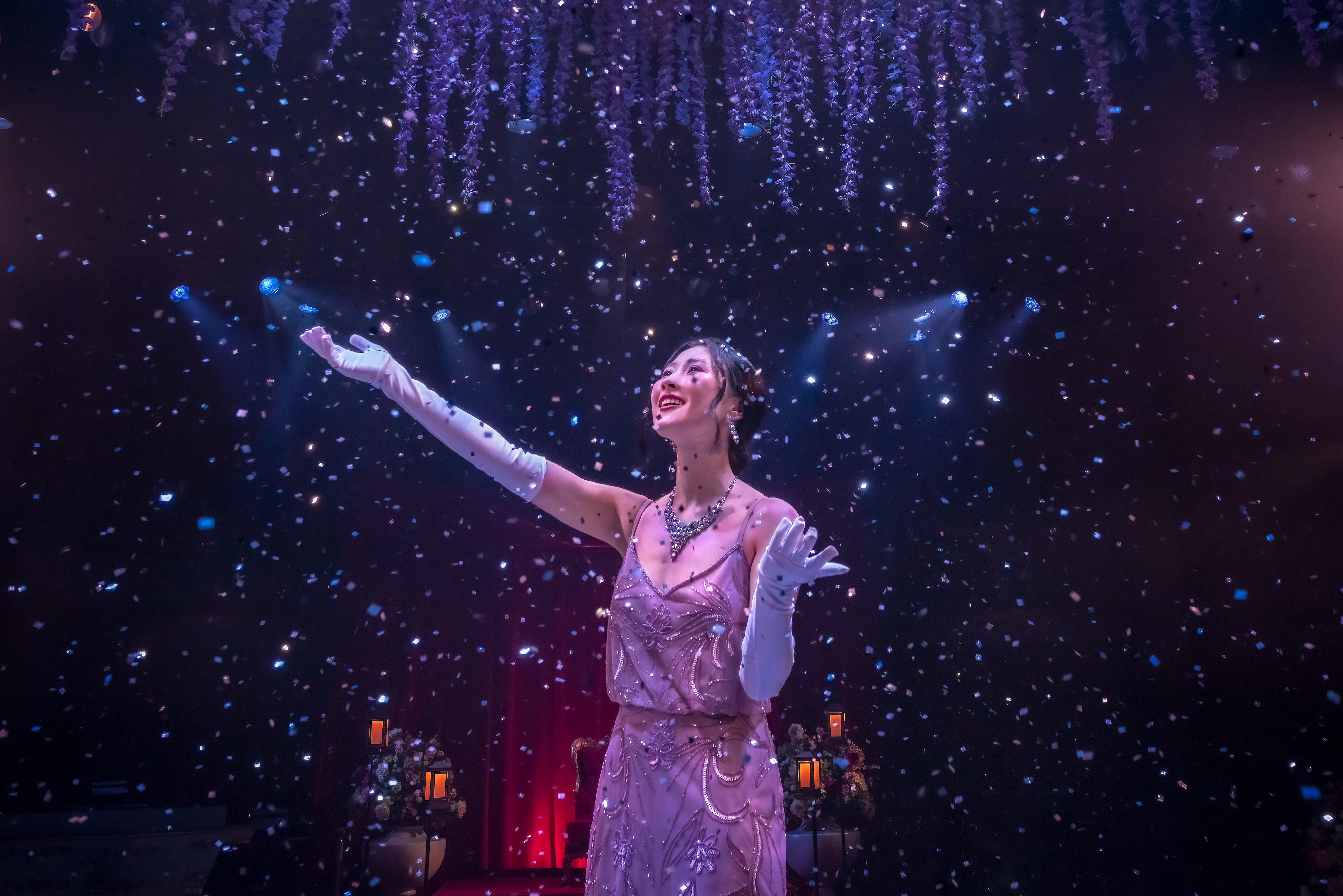 Dress to impress
While costumes and formal attire are entirely optional, dressing up for the ball is part of the thrill of the experience, and many fans dress up in period-accurate garb: empire waists, elbow-length gloves, corsets, top hats, tiaras and costume jewellery. There are also plenty of people dressed in modern-day formalwear (think prom dresses). After all, being noticed by the Queen is worth the effort.

Throughout the event, a string quartet and pianist play instrumental versions of modern pop songs like Ariana Grande’s “Thank U, Next” and Tones and I’s “Dance Monkey,” a soundtrack that evokes the Netflix show. Though no food is served (apart from macarons you can buy at the gift shop), you can certainly enjoy a drink (or drinks). Throughout the venue, pop-up bars serve wine and signature cocktails with on-theme names like the Bridgerton Fashioned (a play on an old fashioned), Whistledown and Dirty (with vodka, lemonade and mint) and Penelope’s Lemonade (an alcohol-free option). The drinks range from $12 to $22. 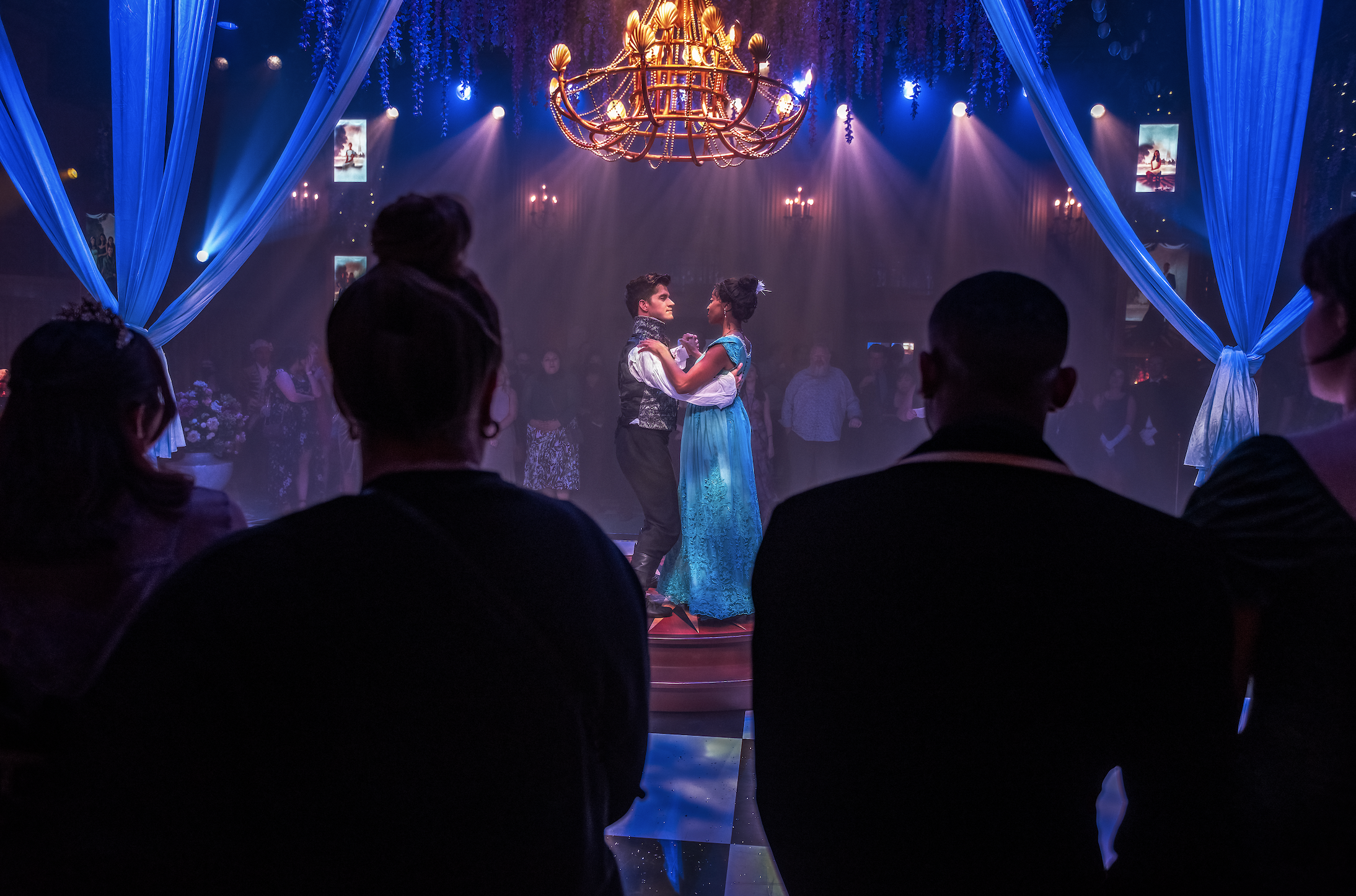 Regency-era dancing
After everyone has filtered into the ballroom, the actors invite the guests to the dance floor. Then the actors stand on a podium for a lesson in how to dance Regency-style, which is to say in long lines down the room. There are a few of these group dances throughout the evening, all led by the actors, but none of it seems overly choreographed or complicated—in fact, it’s a lot of fun. 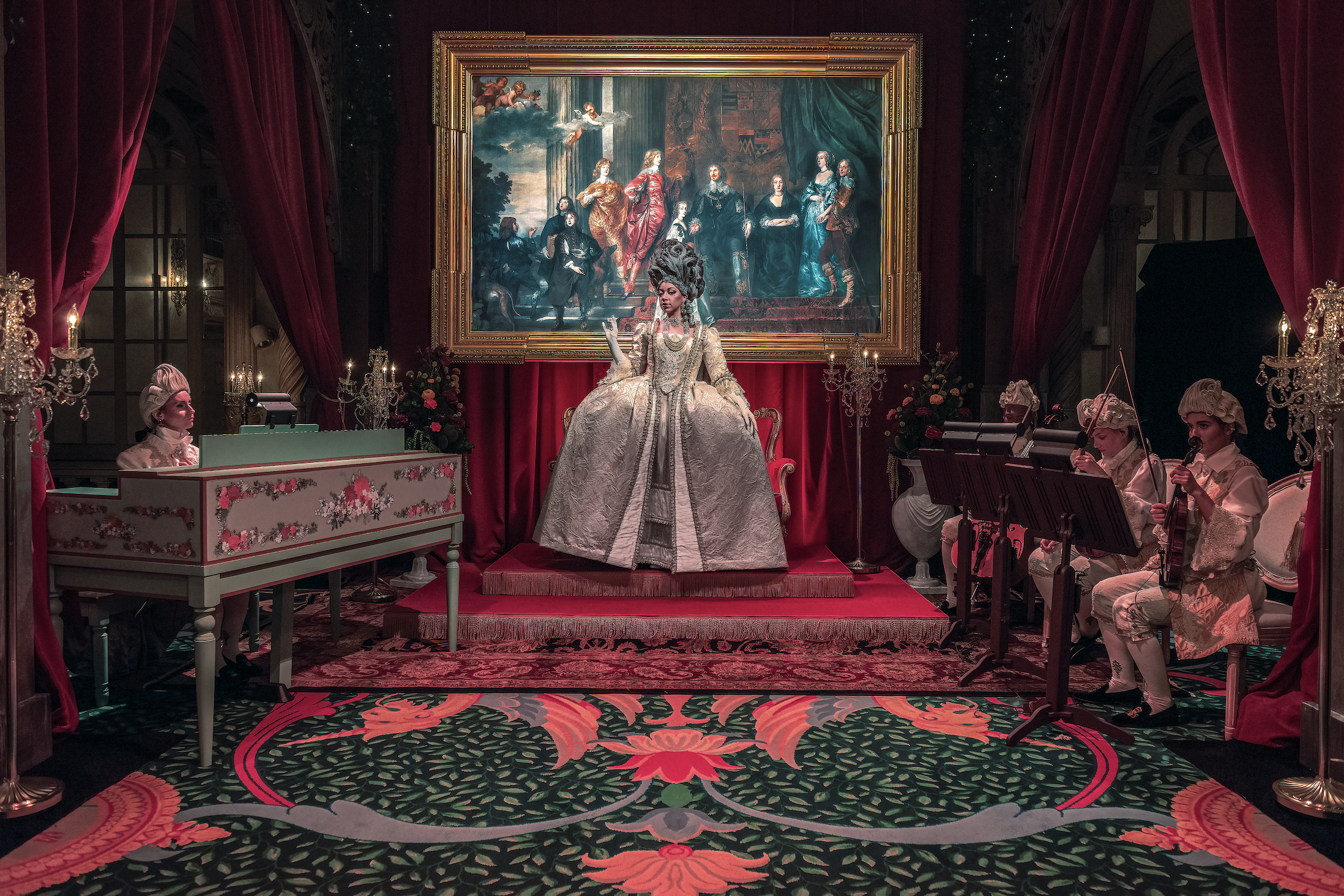 An audience with the Queen
At a certain point, everyone is ushered to either end of the dance floor as the Queen makes her grand entrance, walking past on her way to the throne. Once she’s seated, everyone bows and curtsies. An announcer narrates the goings on, critiquing or complimenting guests’ outfits and curtsies. Then a performance begins. The main plot follows a young couple’s love story and is filled with steamy dance sequences and captivating aerial acrobatics featuring the chandelier centrepiece. 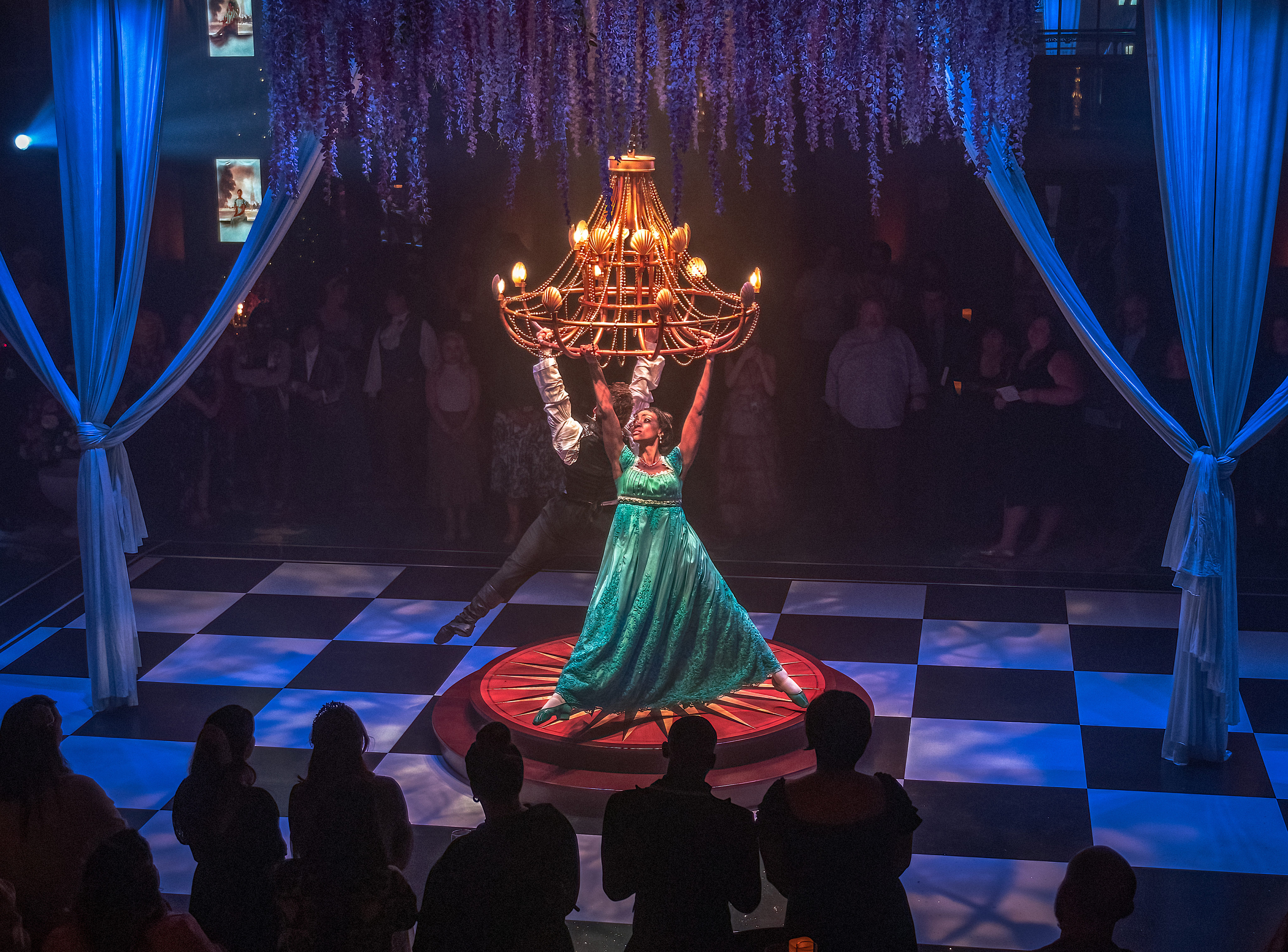 The diamond of the ball
As the experience winds down, the moment we’ve all been waiting for arrives: the Queen picks her diamond. And, based on whether you’ve impressed her, you may get your moment in the spotlight. On this particular evening, the chosen diamond wore a costume inspired by Beauty and the Beast: a beast headpiece and a reproduction of Belle’s yellow dress. If you’re chosen as the diamond, the Queen will invite you up on the pedestal and present you to the whole room so that everyone can marvel at you. 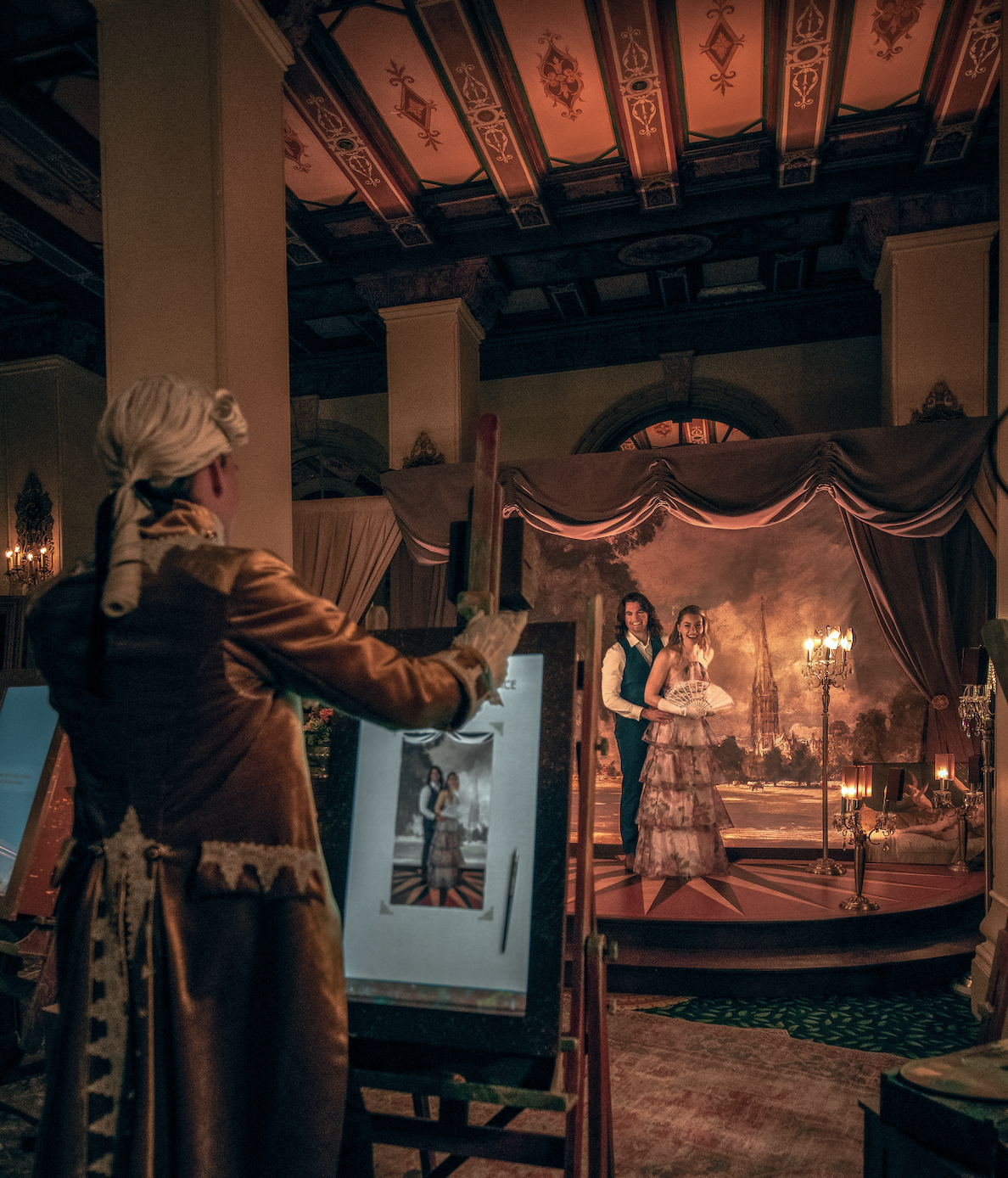 The modiste studio
The other main room is a replica of Madame Delacroix’s modiste studio. More costumes from the show, like Daphne’s iconic blue dress, are on display in this room, alongside a red velvet throne that you can sit on to pose for photos. Another photo opportunity in this space involves a backdrop with hanging diamonds that evoke pouring rain. There, you can get also your portrait painted. Well, sort of—an actor will take your photo, which is digitally altered on the spot to look like it was painted on canvas. Then you can download it as a keepsake.