“We want to have kids, but our life is on hold”: These newlyweds are living 10,000 kilometres apart because of the pandemic

“We want to have kids, but our life is on hold”: These newlyweds are living 10,000 kilometres apart because of the pandemic 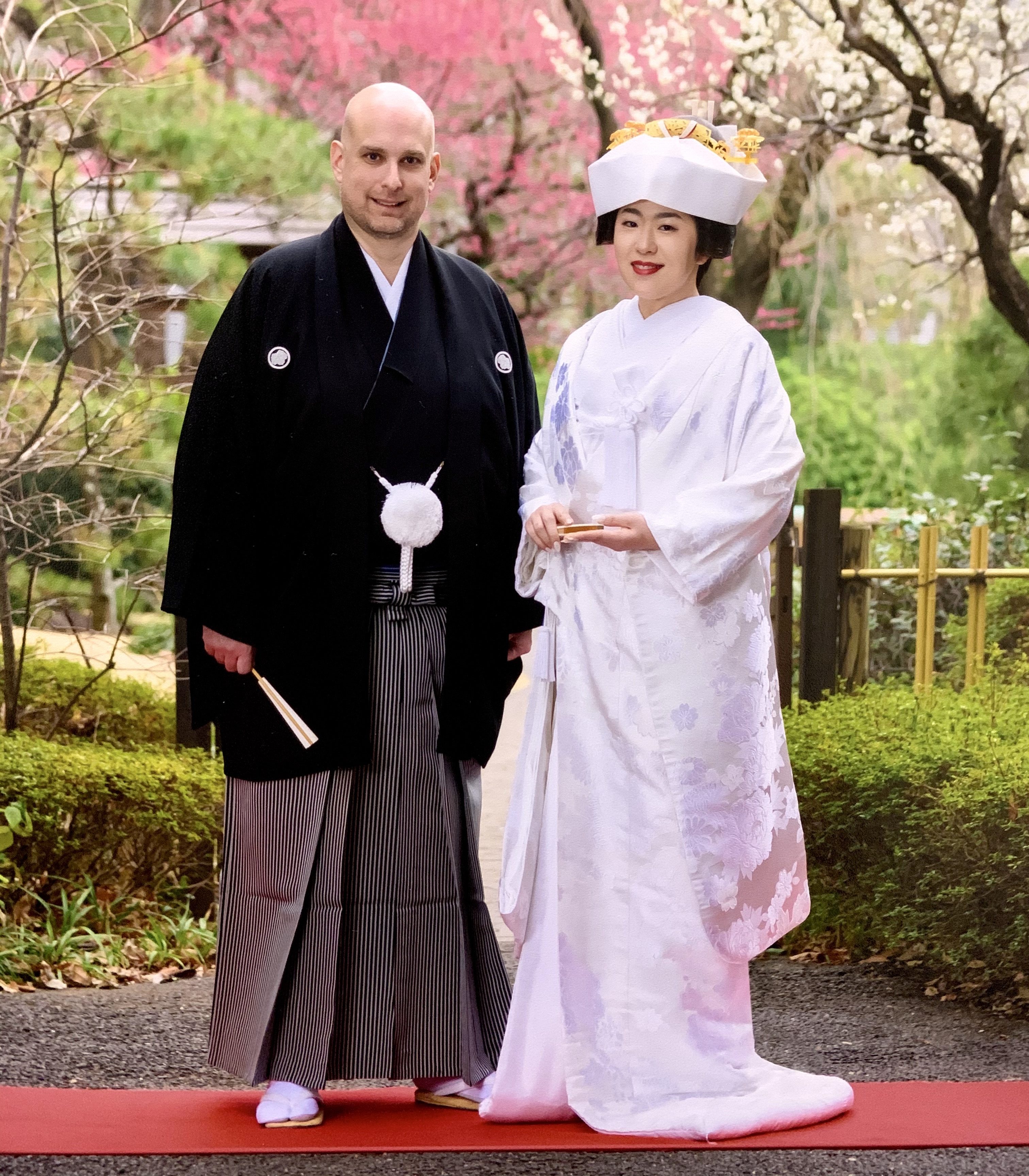 Paul: I’m a 47-year-old business analyst and I live in Oakville. But I’ve got Tinder Gold, which allows you to set your location anywhere in the world. One day, in February 2019, I set my location to Tokyo. I saw Saori and just said, “Wow.” And I loved her profile.

Saori: I live in Tokyo and work as a secretary in the investment banking industry. I’ll turn 40 this year—I’m not young anymore. So I went on Tinder. I was looking for someone who spoke good English, and I came across Paul. I love bald guys, and  he had a sweet smile.

Paul: We both swiped right, and then we started talking. I’d been doing Duolingo, so I tried to say something in Japanese. I wrote: “ohayo” (good morning) and “douitashimashite” (you’re welcome). That was all I had. But her English was amazing.

Saori: I’ve been studying it since I was six, and I majored in English at community college.

Paul: We flirted, and I teased her. She was wearing a Yankees hat in one of her photos, and I said she’d better switch to a Blue Jays cap. It was so easy—Saori was so open. The next day, we moved over to a messaging app used mostly in Japan called Line, and started chatting there. Japan is 13 hours ahead of Toronto. So my night is her morning.

Saori: At first, I thought he lived in Tokyo! I told him I don’t want to do the long-distance thing.

Paul: I asked her to give it some time, not to just close the door. And she said okay. Two days after we met on Tinder, we had our first phone call. How long was that, honey—two and a half hours?

Saori: I think so. We talked about our past relationships, why they didn’t work, and what we’re looking for in a partner now. I told Paul that what I wanted most in a man was someone who is honest, who is sweet, who isn’t afraid of commitment and who wants kids.

Paul: The first time we video chatted, it was totally impromptu—she called while I was driving to Longo’s.

Saori: We started talking about marriage just a few weeks after we met. I didn’t want to be texting for a year, dating for a long time. Yes, we were far apart, and there’s the time difference. But I liked him, and he liked me. Maybe a week after first matching on Tinder, I asked Paul if he wanted me to move to Canada.

Paul: I said yes and bought a plane ticket to Tokyo so we could meet in person.

Saori: I was happy. It wasn’t rushed—it just felt right. I even started looking at wedding venues.

Paul: At the airport, after a 13-hour flight, a little jet-lagged, I laid eyes on Saori for the first time in the flesh. She ran up to me saying, “Baby, baby,” and jumped into my arms. We kissed. It was love at first sight, I guess.

Saori: When I saw him in the airport, I was like, phew. I was so relieved. He was the same guy from his pictures.

Paul: We hit the ground running. Saori had planned out every minute of every day. There was a calendar, with a schedule. I was like, “Honey, have you budgeted in some time for me to pee?” I met all her friends, her mom. We went to Yokohama and ate the most incredible sushi. We went to the south of Japan, to go strawberry picking. Then Saori came here in July, for 10 days. We got engaged on my birthday, July 13. I gave her my mom’s engagement ring.

Saori: My mom and friends thought he was so good. “Finally, you found the one,” they said.

Paul: We technically had two weddings, both in Tokyo. The first one was at city hall, just us. It’s very easy to get married in Japan. You just go to city hall, fill out a form—stamp, stamp—and you’re married. We were married on Saori’s birthday, September 20, 2019.

Saori: In Japan, that’s also a lucky day, a good day to start something new.

Paul: And then we had our formal ceremony on Valentine’s Day, just a few weeks ago, again in Tokyo. The venue was something out of a dream. It was a Shinto shrine called Tōgō, named after a legendary admiral. You have to cleanse yourself with water first, then pass through the traditional gate and into the shrine, where there’s a garden and big koi pond.

Saori: It was the best day ever. It was small—only 32 guests. One of them was my grade school English teacher, who first taught me this language I love. And then there was an after-party with about 80 people. Paul left to go home a few days later.

Paul: My work told me I had to self-isolate for 14 days. This was well before the province started shutting everything down. But Saori and I were trying to move ahead with our lives.

Saori: Now that we were married, the plan was for me to apply to become a permanent resident and immigrate to Canada. But the pandemic changed everything.

Paul: The immigration process is so overwhelming, even in a normal time. There are so many forms. It was only at the beginning of February, before I flew to Tokyo, that I got all our paperwork together—109 pages, 20 photos, our digital conversations, all my tax information. Then, in March, Canada closed its borders. Now we don’t know what’s going to happen. Last week I went onto the immigration website, and it said their phone lines were closed. Don’t call until April.

Saori: Every day it gets worse, every hour. Will I ever get to Canada? I’m so confused. I talk to Paul about the extraordinary measures Canada is taking, how scary and serious it is, all the testing they’re doing. And then I put on the Japanese news and they’re so nonchalant. I broke down and cried a lot to Paul over the weekend.

Paul: I’m trying to be upbeat for her, but I’m frustrated too. I live alone. And now I work from home. I go to sleep alone and I wake up alone. I don’t know when I’ll feel her touch again. I keep wondering: if I’d put the paperwork in sooner, before Covid-19 exploded, would Saori have her permanent residence by now? Our life has been put on hold. We want to have children. But you can’t have kids when you’re 10,000 kilometres apart. I can’t even leave my house.

Saori: Attitudes about coronavirus in Canada and Japan are so different. Life in Tokyo is normal. I still go into work every day. Tokyo isn’t taking Covid-19 as seriously as other cities are. This past Friday, the governor announced: “Don’t go out this weekend—but just this weekend!” Many people here think Japan is okay. We’re clean, we wash our hands all the time. We already wear masks. We take a bath every day. My co-workers, many of whom are in their 20s and 30s, don’t take Covid-19 seriously. “It’s just a cold,” they say. The sakura—cherry blossoms—have bloomed here now, and people are still having hanami, little picnic parties, underneath them.

Paul: I’m worried about Saori. Her train station, Shinjuku station, is the busiest in the world. About three million people—the entire population of Toronto—pass through it every day. And let’s say we flatten the curve here. What if our government looks at Japan, sees it’s swarming with Covid-19 and tells Saori she can’t come here? And of course I’m scared of her getting sick. That’s my main concern. We’re all hunkering down here, but in Japan, everyone is still acting like everything is normal.

Saori: I just need to be patient and see what’s going to happen in the next few weeks and months. Paul is one of the only people I can share my feelings with. I can’t talk about my fear and my anxiety and my sadness with my co-workers.

Paul: I can’t describe how lonely I am without Saori. I can’t tell you how much I miss physical contact, especially now, in this fearful time. It’s unclear whether or not Saori could come here tomorrow. The immigration website says immediate family members of Canadian citizens are allowed to come to Canada, but only for “essential reasons.” I’m not sure what that means. Our borders are closed, and now Japan’s are too. I haven’t received clarification from any government body. So we’re still in limbo. In the meantime, we talk to each other across time zones. She’ll say goodnight to me when she wakes up, and I’ll tell her to have a good day. I’ll say “matane,” which means “see you again.”

Saori: My lunchtime is his nighttime. I say, “Sleep tight, and dream about me.”