“We envisioned the whole thing as a conveyor belt”: How St. Mike’s doctors created a Covid-19 assessment centre from scratch

“We envisioned the whole thing as a conveyor belt”: How St. Mike’s doctors created a Covid-19 assessment centre from scratch 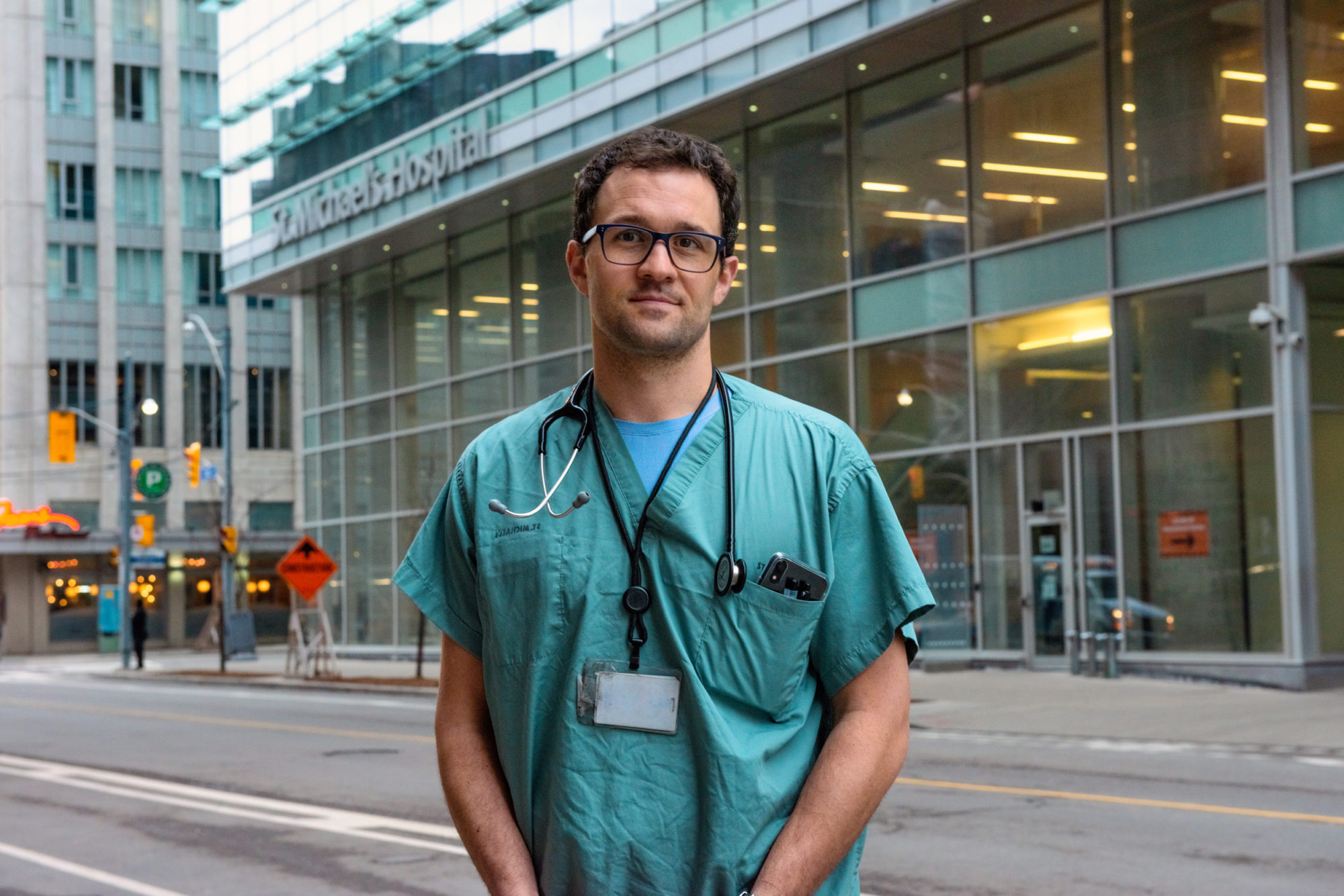 As an emergency physician and trauma team leader at St. Michael’s Hospital, I’ve been paying close attention to developments in the Covid-19 outbreak over the past few months. Once we got our first confirmed cases in Canada, our team knew we needed a plan.

Our emergency department is full of vulnerable people, and the last thing we wanted was a positive case entering the waiting room and infecting patients and visitors: emergency waiting rooms were a breeding ground during the 2003 SARS outbreak. To avoid that, we collaborated with Toronto Public Heath to create a dedicated centre to handle potential Covid-19 cases.

I was named medical director, a role I shared with Paul Das, a family doctor at St. Michael’s Hospital who also works in an Oshawa emergency department. At around 8 p.m. one night in early March, I was at home coming up with ideas for the centre when I heard a knock at my door. It was Paul. We’d been colleagues for the past five years, but we’d never met in person until that night.

We went over the nuts and the bolts of what we were going to have to do. It was a dynamic process with a lot of variables. We had to figure out how to clean and staff the centre, how to train our staff and keep them safe, how to ensure patients didn’t infect each other, how to ventilate the space without spreading the virus elsewhere, and most importantly, where to build the actual place. And we knew we had to work fast.

We sketched it all out on a scrap piece of paper. We envisioned the centre flowing like a conveyor belt: patients would go through registration, assessment and testing, and they’d enter and leave at separate ends of the space. To help direct traffic, we’d need runners stationed at key areas to guide patients to their next stop. One of the key design principles was to keep people at least two metres apart from each other.

We determined the staff would work in teams of two: one staffer in full protective equipment—scrubs, gown, gloves, surgical mask and a full plastic face shield—interacted with the patient, while a second staffer, standing at least two metres away, dealt with paperwork and documented vital signs. We’d need all those hands on deck in the coming months, so we decided the centre would be staffed by personnel from other departments. Thankfully, a number of family physicians and nurse practitioners stepped up. We had a full roster of clinicians within minutes of sending the email.

In the coming days, a team of us scouted locations. We settled on a St. Michael’s research building across the street from our ER on Shuter. It’s a single large room we can easily reconfigure, and it had automatic doors to minimize potential contamination. Our facilities and engineering team collaborated with the design agency Astound and began construction in the research building last Saturday, working overnight to get the centre ready in time for Monday. They installed massive fans that suck in the air and expel it through a HEPA filter, which cleans the air before it leaves the building. They built walls approximately nine feet tall in the testing areas, so if someone sneezed, the virus wouldn’t be able to travel over the top. The walls and dividers they built were covered in plastic sheathing for easier cleaning. Once construction was completed on Sunday, our design-simulation team did walkthroughs to address bottleneck spots and determine where signs and markings on the floor were needed to direct people. Our team held an employee training session and opened the centre the very next day.

It took more than 100 people—including hospital leadership, simulation experts and operation staff—to design and quickly pull this together. Our experience during H1N1 and SARS made us confident we could handle it. The St. Michael’s Hospital Covid-19 assessment centre is open daily from 9 a.m. to 7 p.m. Security guards at the doors control the flow of traffic. Patients walk in through automatic doors, then put on a mask and wash their hands. They register and wait in a standing section before entering one of five assessment stations, where it’s determined if they meet the criteria to be tested. We test anyone who exhibits symptoms like a cough or fever and a) works in a setting where they can infect many others at risk—like a long-term-care home, or as a first responder; b) lives in a vulnerable setting like a homeless shelter or retirement home; or c) is referred from Toronto Public Health. If a patient meets the criteria, they go to one of four testing stations in the back, where they receive a nasal swab. Once the swabs are done, patients wash their hands and leave through the nearby exit, where a security guard ensures they’re wearing a mask and that they washed their hands on the way out. The whole process takes less than 10 minutes.

Testing is critical in flattening the Covid-19 curve: it helps Toronto Public Health trace the origins of positive cases and isolate those who’ve been exposed. But we’re not just a testing facility. We also provide information to everyone we’re assessing; that’s probably our most important function. If people don’t meet the criteria to be tested but still have symptoms, we educate them on how to self-isolate and for how long. In general, people should only leave their homes for important reasons, like getting food or picking up prescriptions, and that’s only if they can’t make other arrangements with family or friends. They should keep two metres between themselves and others.

Getting our assessment centre from scrap paper into a reality took just under two weeks, which is incredible. From hospital administration and cleaning staff to construction workers and security guards, we’ve all rallied behind this. Paul Das, my fellow co-medical director, and I were strangers a little over two weeks ago. We’re now good friends. This project has brought a lot of us together during difficult times. But the hard work’s just beginning.