Queen’s Park announced during last week’s budget unveiling that it will be committing billions of dollars to new subways in Toronto. It’s an ambitious gambit from premier Doug Ford—but there’s good reason to be skeptical that any of it will be built: our civic history is filled with bold visions for mass transit that ended up not coming to pass. Here’s a look back at major transit plans that fizzled. 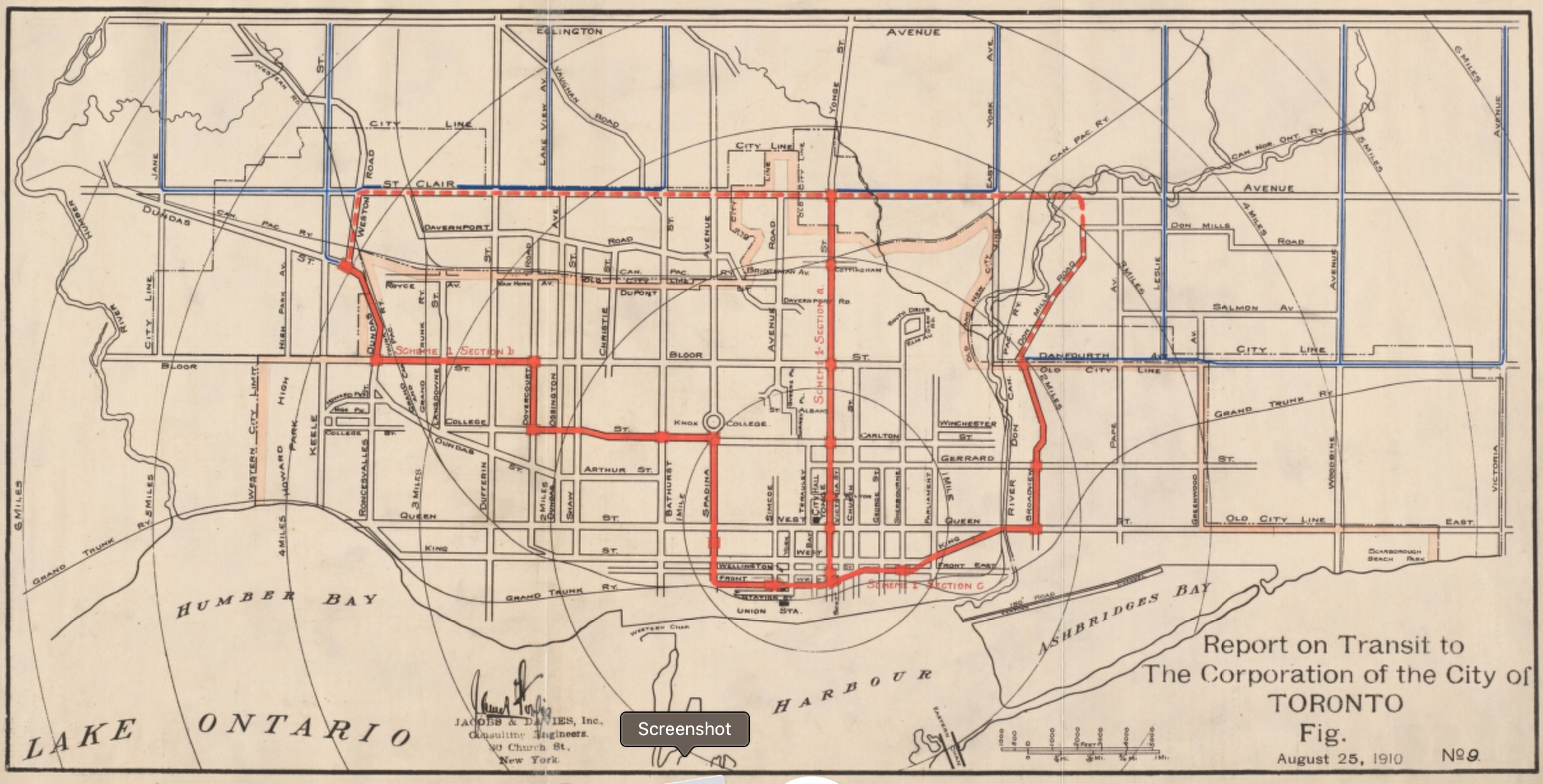 Tubes for the People

Hocken ran for mayor in 1910 on a platform of “Tubes for the People.” He lost the election, but voters endorsed the idea of studying a subway system for their burgeoning metropolis of 350,000. The firm Jacobs and Davies was hired. They recommended starting with a line down Yonge Street, from Front to St. Clair, followed by a loop running from Weston south to Spadina and Front, east to King and Broadview, north to Don Mills, and then back across St. Clair to Weston. In the 1912 election, voters were asked to approve spending $5.4 million on the project. They balked. The Yonge line didn’t open until 1954. 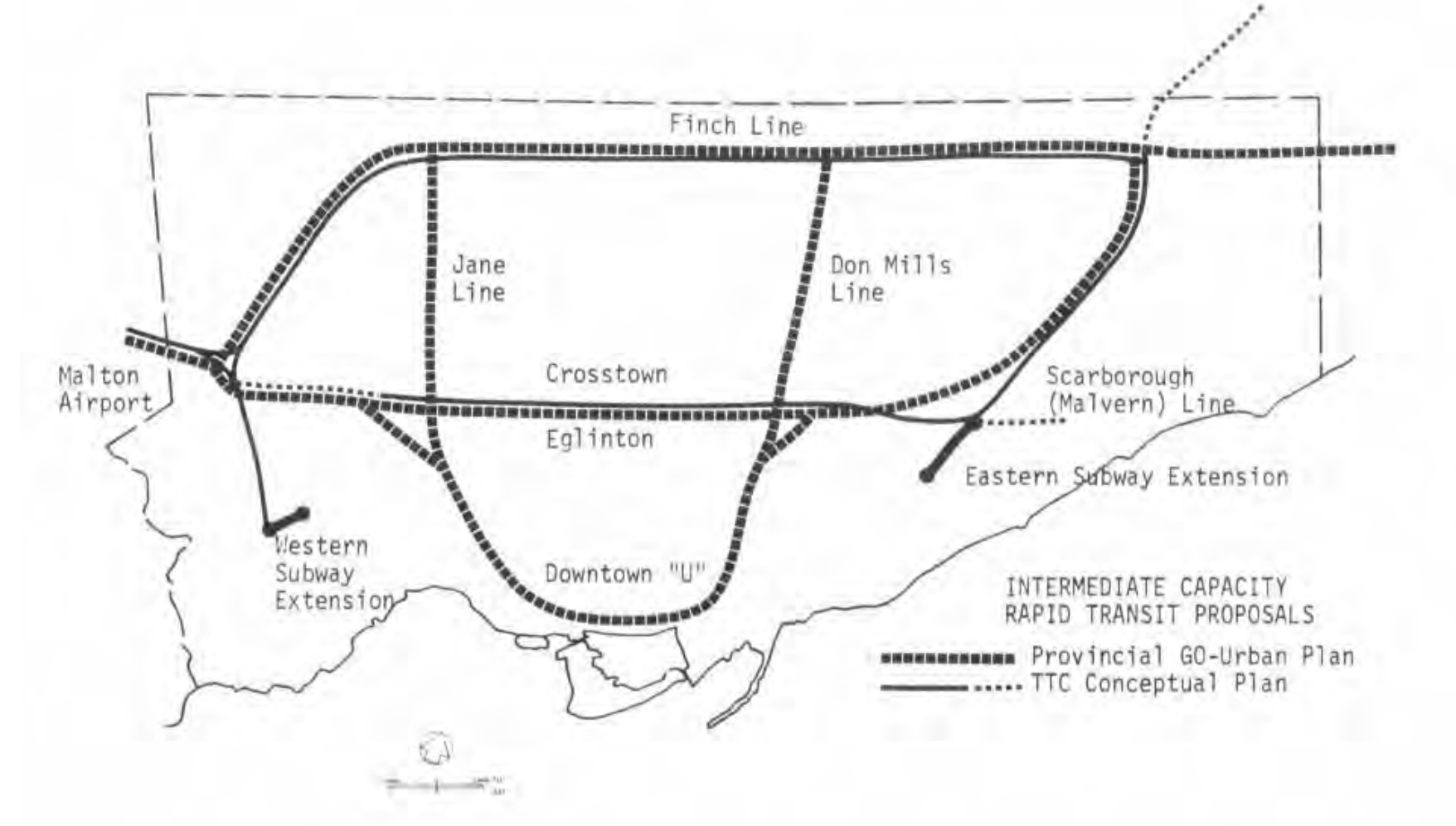 Progressive Conservative premier Bill Davis wanted rapid transit to connect the suburbs to downtown, but there wasn’t enough population density in the ‘burbs to justify the cost of digging more tunnels. West Germany’s Krauss-Maffei AG proposed a solution: space-age magnetic levitation (maglev) trains floating along automated guideways (essentially concrete tracks built above ground). Davis’ map included a “crosstown route” along Eglinton, from Pearson Airport to Malvern, an east-west route along the Finch hydro corridor, and a U-shaped line from Jane and Finch south to Union Station and back up to Finch through the Don Valley. Alas, the maglev trains had trouble going around curves and handling snow, so the company gave up. Ontario forged ahead with electric trains on automated guideways, but completed only one line: the Scarborough RT, which opened years late and way over budget in 1985. 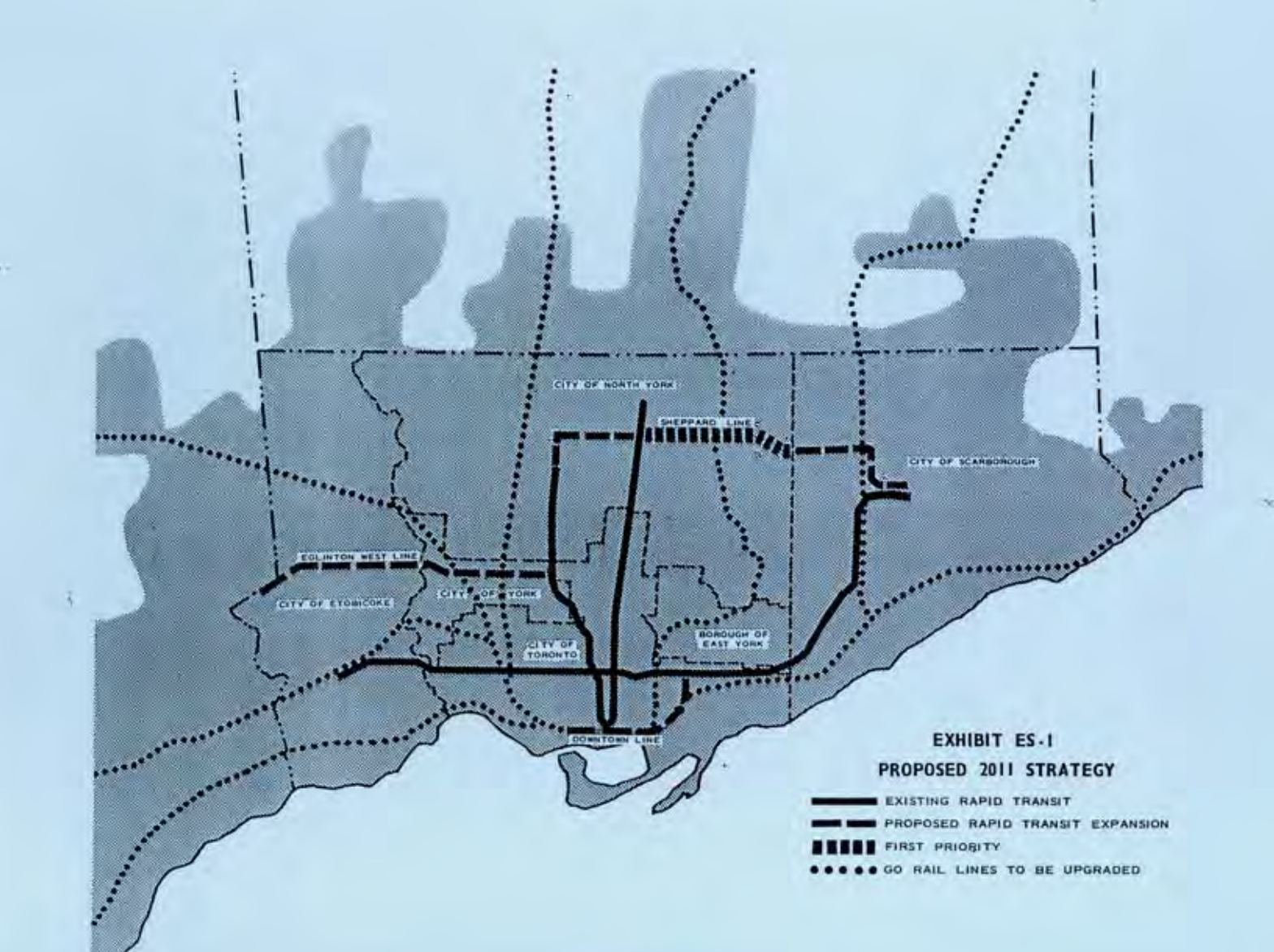 After the failure of GO-Urban, Toronto’s regional government approved three new subway lines. The first would have run along Sheppard, from Downsview Station to Victoria Park. The second would have run along Eglinton, from Pearson Airport to Allen Road. The third would have run from Pape or Donlands to Spadina and Front via Union Station, in order to “relieve” growing congestion at Yonge and St. George stations. This “downtown relief line” was opposed by New Democrats like Jack Layton, who wanted to force population growth away from downtown and into the suburbs. Suburban councillors were happy to oblige, and Liberal premier David Peterson agreed to move ahead without the relief line. 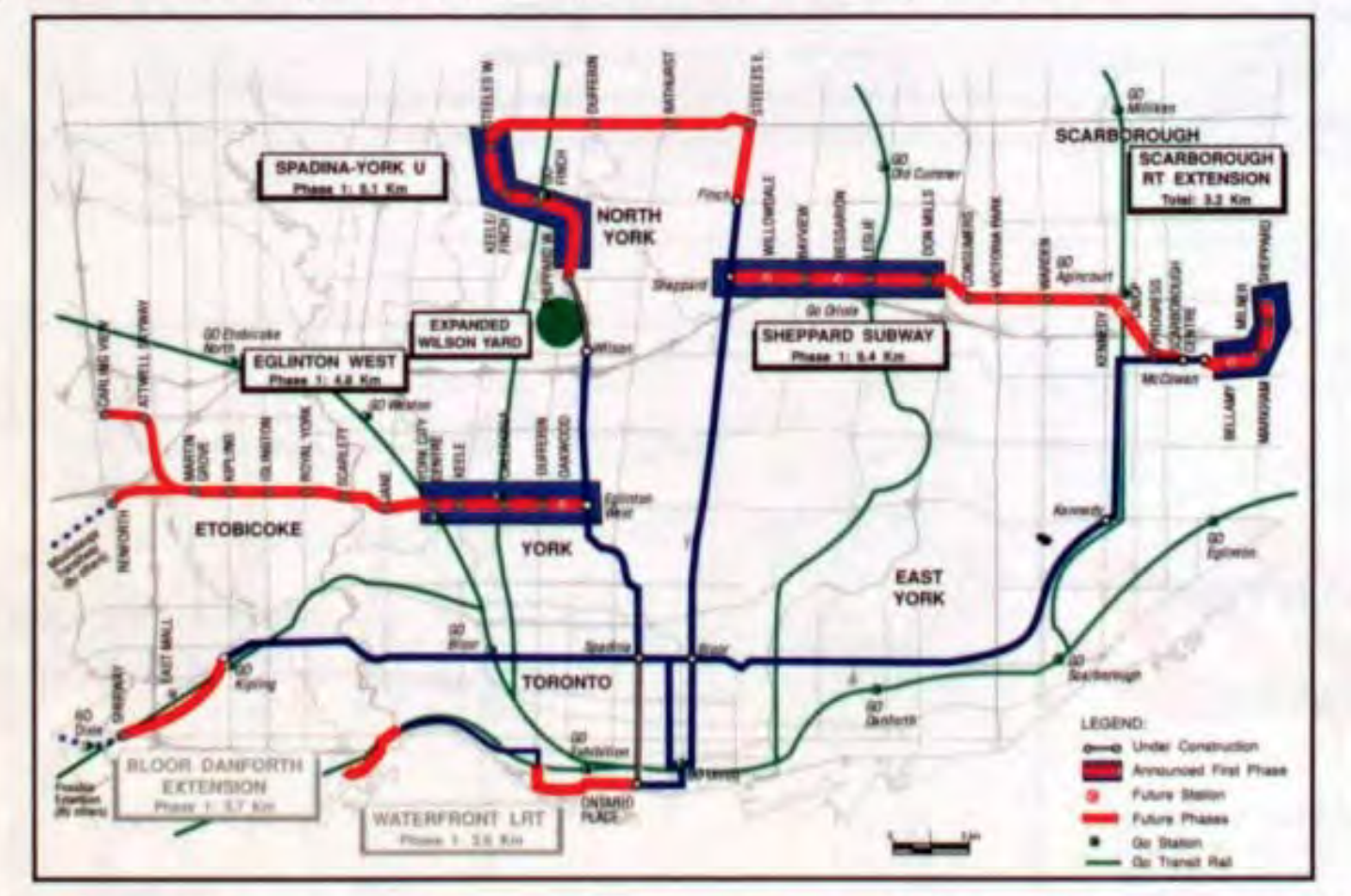 New Democrat Bob Rae became premier in 1990 and inherited a very weak economy. He decided to pare back the Sheppard line to just the stretch between Yonge and Don Mills. He also proposed a short subway line on Eglinton, from Allen Road to Black Creek Drive, as well as an extension of the Spadina line through York University and Steeles, and an extension of the Scarborough RT to Markham Road. Rae didn’t get very far before PC Mike Harris took over at Queen’s Park in 1995 and filled in the holes already dug for the Eglinton subway. Sheppard line construction continued, but the tunnels didn’t open for business until 2002. The Spadina extension was restarted under Dalton McGuinty’s Liberals and finished in 2017. 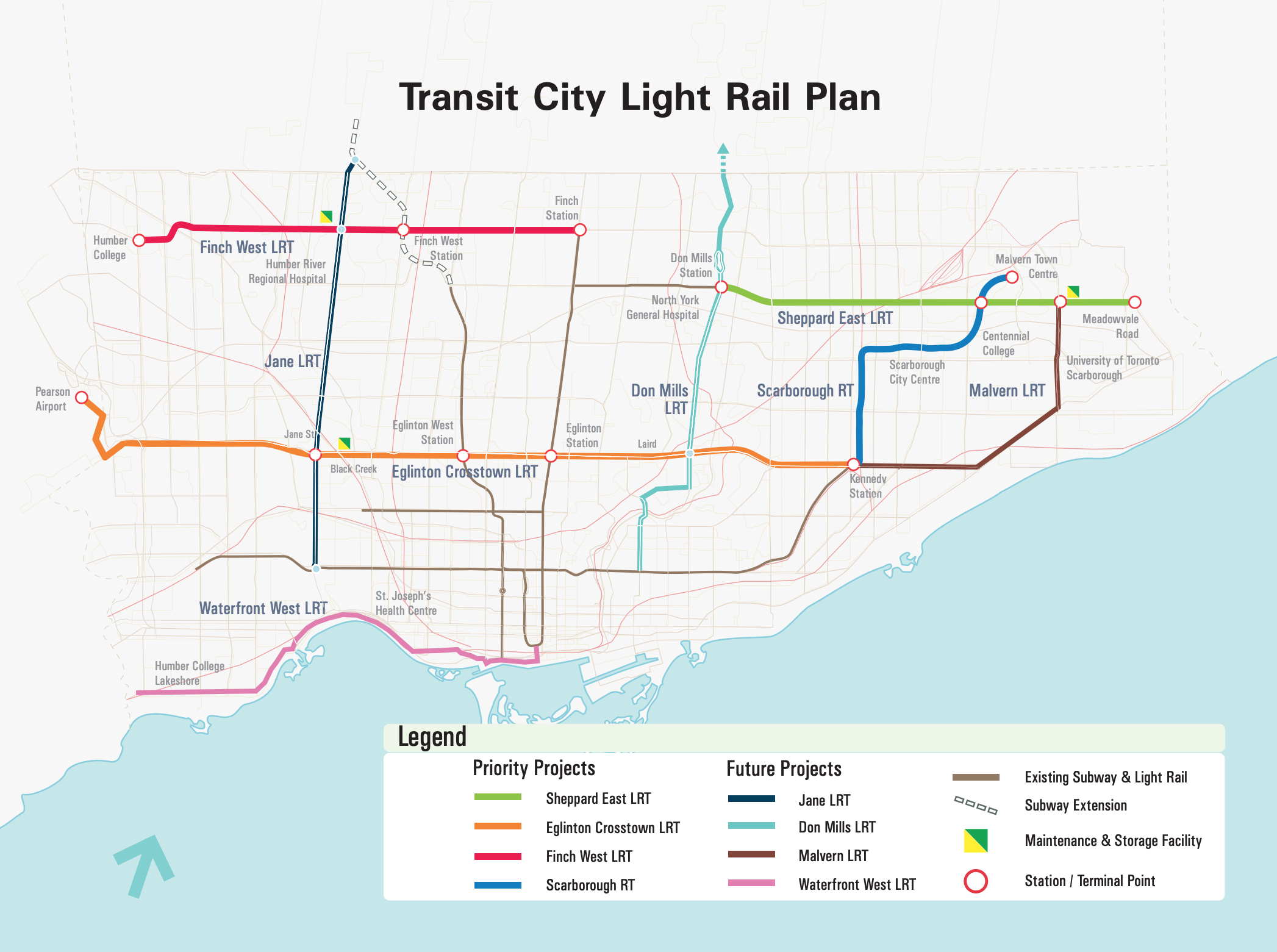 Miller wanted to make up for lost time. He proposed speeding up construction by ditching underground tunnels and laying track for seven new light-rail lines along existing arterial roads. The biggest would have been the 33-kilometre Eglinton Crosstown, from the airport to Kennedy Station. The others would have traversed Finch West, Sheppard East, Jane Street, Don Mills Road, Lake Shore West and a stretch of Scarborough from Kennedy to Malvern. The downtown relief line wasn’t on Miller’s map, which raised concerns about added pressure on the Yonge line. The province agreed to fund most of the proposal, but drivers kvetched about losing road space.

As a candidate for mayor, Ford declared war on Transit City. He vowed to cancel the LRTs and instead extend the Sheppard subway from Downsview to Scarborough Town Centre, and replace the Scarborough RT with a subway to McCowan. He said he could do it all for just $4 billion. His rival, George Smitherman, proposed a $17 billion plan that the Toronto Star referred to as a “souped-up Transit City.” It would have provided LRTs on Finch West, Sheppard East and the eastern end of Queen’s Quay. Eglinton would have gotten an LRT, but it would have been buried to please drivers. Smitherman also promised to extend the Sheppard subway, replace the Scarborough RT with a subway, and extend the Bloor line to Sherway Gardens. Ford won, but he wasn’t able to realize his suburban-subway dreams. The province agreed only to fund a version of the Eglinton Crosstown light-rail line originally proposed as part of Transit City. It’s set to open in 2021. 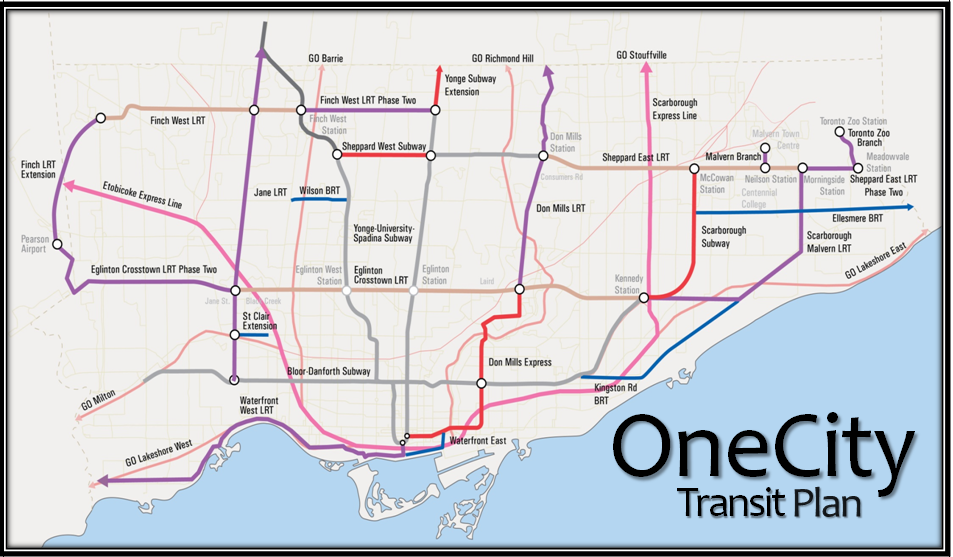 Stintz sidestepped mayor Rob Ford and went directly to the public with a plea for support for a 30-year, $30-billion plan to build just about every project imaginable. Her map included Miller’s LRTs, plus six subway projects: an extension of the Sheppard line to Downsview, a subway replacement for the Scarborough RT, a “Don Mills Express” from Eglinton to Queen, a “Scarborough Express” from Steeles to Union, an “Etobicoke Express” from the airport to Union, and an expanded Bloor-Yonge Station. It was all predicated on increased property taxes, combined with transfers from the provincial and federal governments. Homeowners would have needed to shell out about $180 per year on average. Councillors quickly kiboshed the idea. 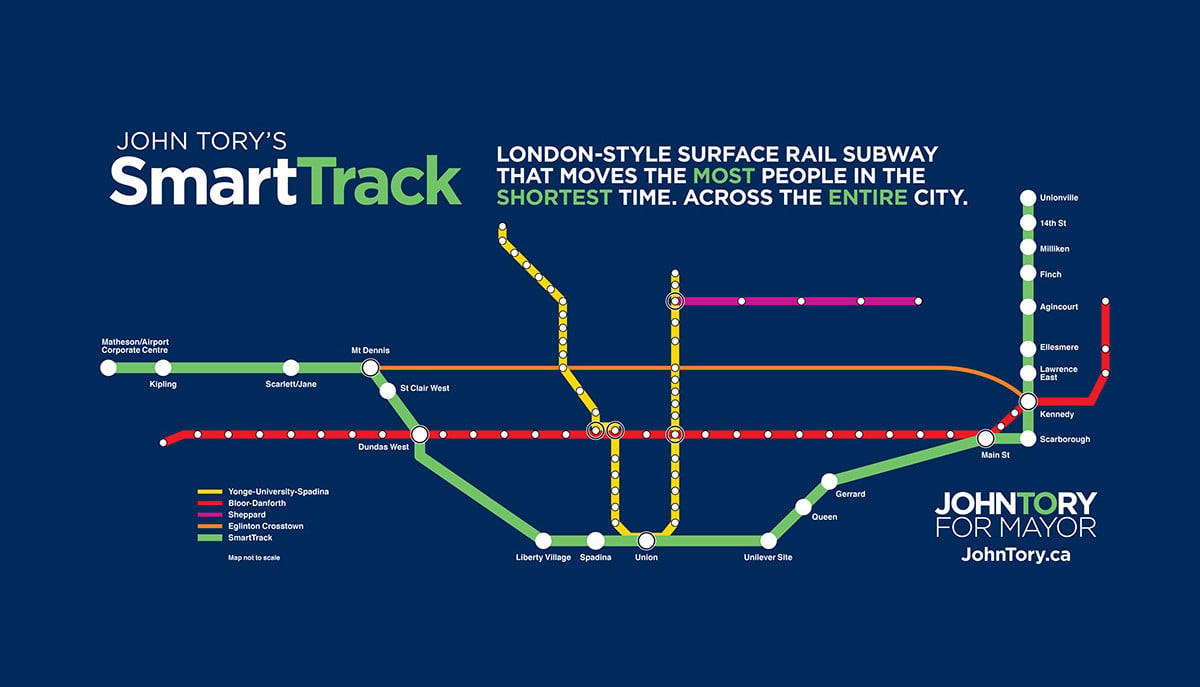 While running for mayor, Tory proposed a 22-stop “surface subway” that would have offered 15-minute service, mostly on existing GO Transit lines, with stops in neighbourhoods like Liberty Village and Corktown. His main selling point was that it could be done in seven years—about twice as fast as rival Olivia Chow’s plan for a pared back Transit City plus downtown relief line. In December, the city approved funding to build six SmartTrack stations: St. Clair-Old Weston, King-Liberty, East Harbour, Gerrard-Carlaw, Lawrence-Kennedy and Finch Kennedy. Metrolinx is planning to build two more stations in Toronto: Spadina-Front and Bloor-Landsdowne. The provincial budget tabled by Doug Ford’s government earlier this week says the province is willing to fund Tory’s proposed all-day 15-minute service in “core” areas, but it doesn’t commit to particular stations. 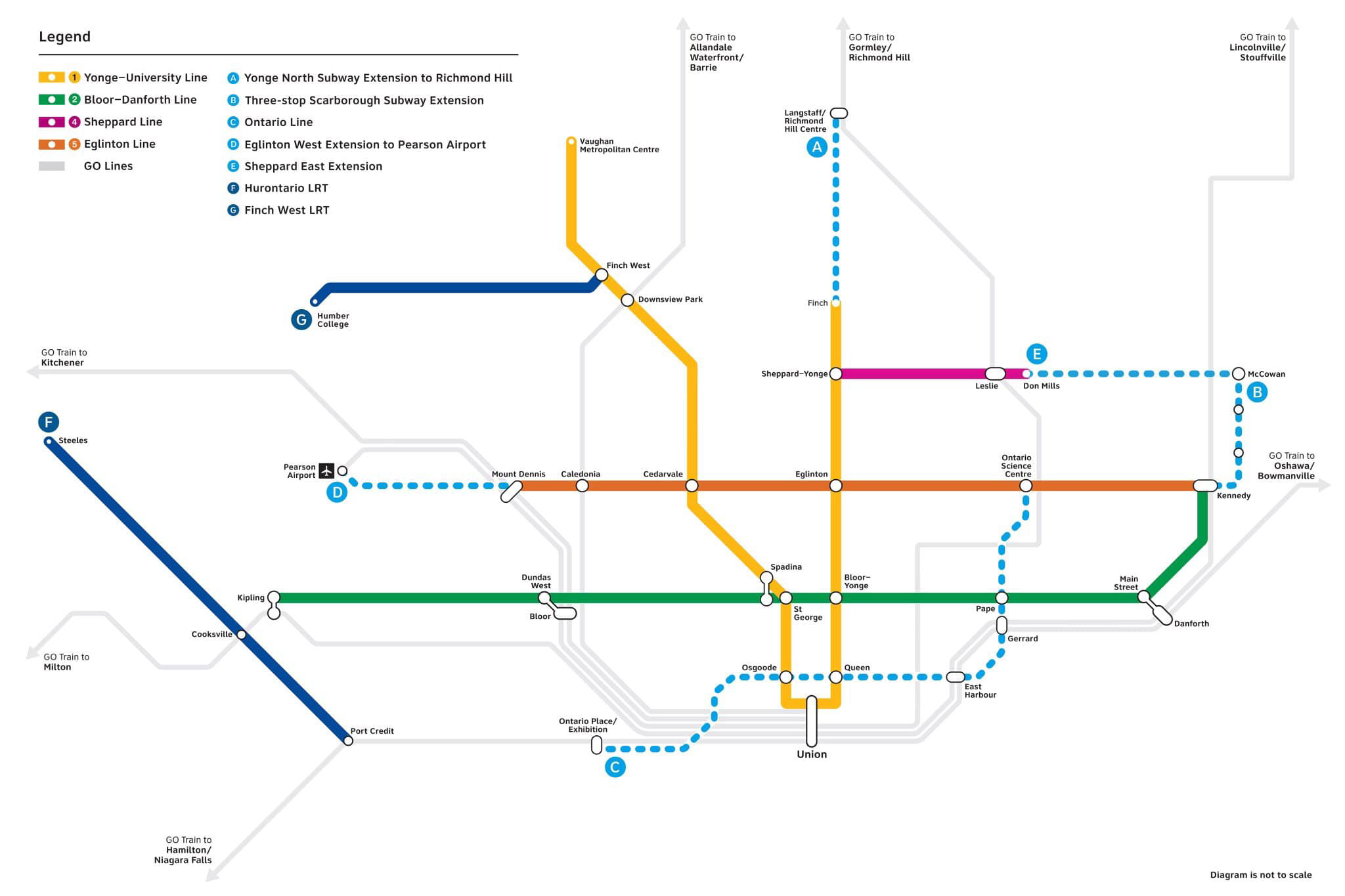 Despite some worries that Ontario’s new Progressive Conservative government would prioritize building subways farther into the suburbs, where there are more PC voters, Premier Ford made the downtown relief line—now called the “Ontario Line”—his top priority. The latest proposal has the line running from Ontario Place through Liberty Village, downtown and Leslieville before heading north all the way to the Ontario Science Centre. The province says the line will open before a Yonge subway extension into Markham and Richmond Hill, and before the Scarborough RT gets replaced with a three-stop subway around the same time. We’ll believe it when we see it.