Who: Jeremy Chapple and Sarah Yoo, both 27; with their three-year-old feist terrier, Bronco
What they do: He does commercial HVAC for a trades company; she’s a freelance content strategist and social media manager
What they make: He makes $88,000 a year; she makes $70,000 a year

Jeremy grew up in the Beaches. In 2013, he enrolled in the heating and refrigeration program at George Brown. After graduating in 2015, he started doing residential installations for a small business, then apprenticed at a company that services commercial and industrial equipment. Since then, he’s been working on his refrigeration mechanics apprenticeship. Jeremy expects to complete his apprenticeship by the fall of 2022, at which point he’ll receive a mechanic licence, allowing him to operate his own HVAC company anywhere in Canada.

Sarah grew up in Vancouver, and studied psychology at the University of British Columbia, graduating in 2014. After that, she got a certificate in new media and web development from the British Columbia Institute of Technology. She worked at a few digital marketing start-ups, and moved to Toronto in July 2016 to work in social media marketing at SpaMedica. At the end of 2018, she started freelancing as a content strategist and social media manager, making $70,000 a year.

The couple met on Tinder in early 2017. Their first date was at Bar Wellington, and they started living together shortly after. In February 2020, they moved into a one-bedroom condo near Harbourfront, paying $1,650 a month.

In the short term, Sarah and Jeremy are saving up for an all-inclusive vacation to “anywhere tropical,” which they expect to cost roughly $3,200. They’ll have to wait until travel restrictions are lifted, of course, but neither Sarah or Jeremy have ever done an all-inclusive trip. Looking ahead, Sarah and Jeremy would like to purchase a $600,000-$700,000 home, something older they could renovate, either in Ontario or on the outskirts of Vancouver. Moving to western Canada would give them a slower-paced lifestyle, with a balance of both city and nature, along with proximity to Sarah’s friends and family. They would like to own real estate before getting married and having kids.

Both Sarah and Jeremy were able to continue working after the pandemic hit Toronto. Some of Sarah’s clients were forced to cut back on marketing expenses or shut down their business entirely, while others, like the Social Blend and Mortgage Jake, actually experienced a boost in sales. Overall, Sarah’s work held steady and she had the opportunity to work from home. There were a lot of layoffs in the commercial HVAC industry, but many of the commercial sites where Jeremy works were not affected, apart from stricter safety protocols.

Earlier in the pandemic, the couple almost doubled their grocery costs for the month, but still saved quite a bit of money. Other than purchasing alcohol, Sarah and Jeremy spent very little on entertainment, shopping and takeout. “We spent a lot of time during the first few months of the pandemic re-evaluating our financial situation and imagining our long-term goals,” she says. “Now, with Stage 3 in Toronto, we go out to eat once or twice a week, as opposed to before the pandemic, when we’d go out five or six times a week.” 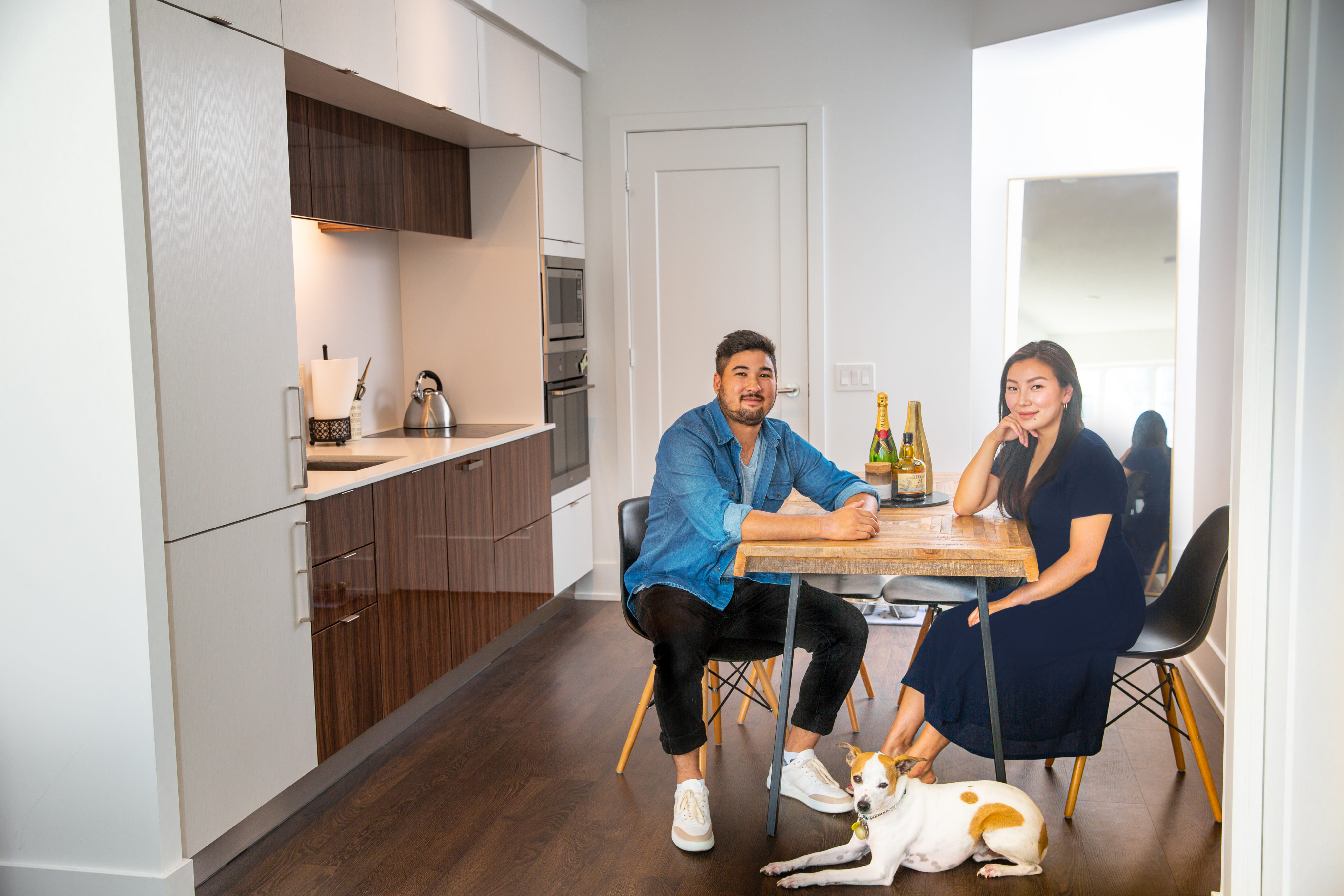 Regular expenses, split between the couple:

Rent: $1650, including Internet, for their one-bedroom Harbourfront condo.

Cellphone: $175, for unlimited calls and nationwide texts, with Virgin Mobile. “We’re actually looking to get new iPhones soon. Jeremy’s audio is muffled, and I want to switch my provider,” says Sarah.

Eating out: $400 a month, at Rol San, Iruka Sushi, Kinton Ramen and Rudy Burger. “We’ve only dined out on patios so far. But maybe in a few weeks we’ll start to dine in at Rol San again,” says Jeremy.

Car payments: $940 a month, for Jeremy’s 2012 Dodge Ram 1500. That figure includes lease payments, gas, insurance and condo parking. “I’ve got job sites across the GTA, everywhere from Markham to Hamilton. Right now, I’m driving my work truck 30 minutes to an hour every morning,” says Jeremy. “The traffic is way better than before the pandemic.”

Transportation: $50 a month, for Sarah’s Presto pass and occasional Uber rides. “I work from home and walk as much as I can to run errands or meet friends, so my transportation costs are fairly low,” says Sarah. “I only take the TTC when it’s more than a 45-minute walk. And I only Uber if I’m extremely tired or if it’s really late.”

Subscriptions: $120 a month, for programs like Adobe and Canva, a graphic design platform; Spotify; Skillshare, an online learning platform; Planoly, an Instagram post scheduler. “We mooch off our friend Andrea’s Netflix,” says Sarah.

Savings: $1,800-$3,000 a month, into tax-free savings, mutual funds and RRSPs. “In the next year or two, we’d like to save enough for a down payment on a home,” says Jeremy. “We normally like to dine out and enjoy the nightlife in the city, but because of the pandemic, we were able to save about $450 a month.”

Pet food: $50 a month, for a bag of Pro Plan kibble and wet food cans, a tub of Benko treats and Greenie dental sticks, for their dog Bronco. “Bronco eats when he wants. Sometimes it’s once a day, sometimes it’s three times a day. He’ll devour the whole bowl if we mix his dry food with some wet food,” says Sarah.

Veterinarian: $500 a year, at Leslieville Animal Hospital. “We took Bronco to the vet a couple of months ago, and it was $500 for his rabies, heartworm and flea shots,” says Sarah. “We don’t mind paying for Bronco’s medical costs, no matter how much it costs.” 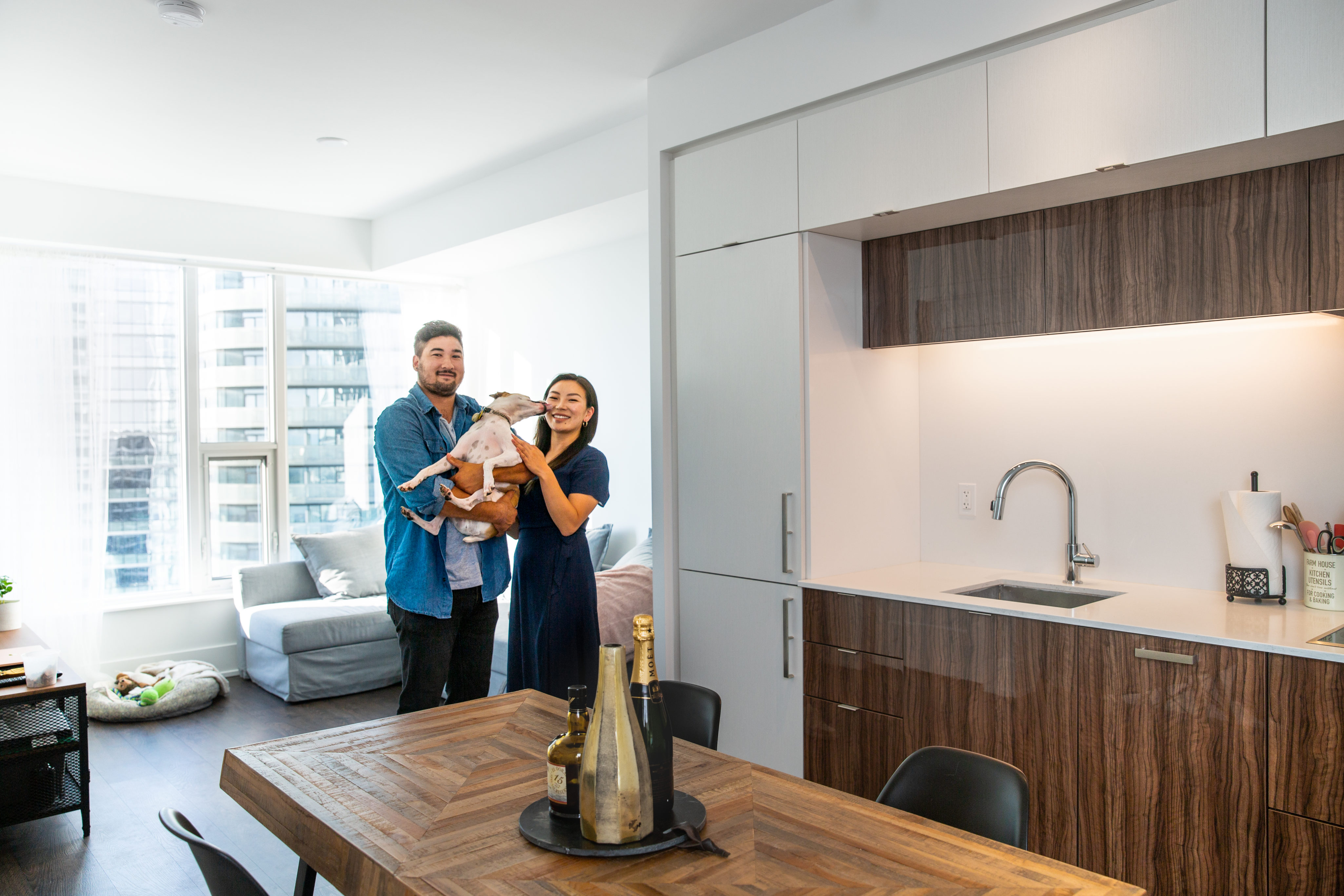 Car parts: $500, for wheel bearings for Jeremy’s truck. “My original bearings were loud and worn out, so I purchased the new ones online and installed them myself, saving about $650 in labour,” says Jeremy.

Travel: $1,200, for a recent three-day trip to Vancouver. That figure includes airfare, accommodations and food. “I went back to Vancouver early August for four days to visit friends. It was weird to fly with a mask on for the entire flight, but I was lucky enough to not have to sit beside anyone on both plane rides,” Sarah says.

Computer: $1,800, for Jeremy’s new MacBook. “My old Macbook was absolute garbage,” says Jeremy. “The battery was dead and it had to be plugged in, and some of the buttons were broken. To be honest, I don’t use a computer often—maybe once a week—but it feels good to have a working laptop when I need it.”

Books: $75, for Talking to Strangers by Malcolm Gladwell and Big Friendship by Aminatou Sow and Ann Friedman. “I heard about Gladwell’s Talking on a few podcasts. After finishing Outliers, one of his most famous books, I had to get my hands on his latest work. I also heard Big Friendship was the perfect quarantine read, so I went to Cole’s in the Beaches—I wanted to avoid going to Eaton Centre—and shelled out for both books,” Sarah says.

Clothing: $120, for a mid-length navy wrap dress from Frank and Oak for Sarah. “I bought the dress on a whim in early August, but thought it looked classic enough to wear to weddings, dinner or family gatherings,” says Sarah. “I wore it to a socially-distanced patio happy hour as soon as I got it, in early August, but I doubt I’ll wear it again any time soon, since I have no other plans for the rest of the year.”