“I want people to feel like they’re living inside Atwood’s novels”: A Q&A with MaddAddam choreographer Wayne McGregor

“I want people to feel like they’re living inside Atwood’s novels”: A Q&A with MaddAddam choreographer Wayne McGregor

On November 23, the National Ballet of Canada celebrates the world premiere of Wayne McGregor’s MaddAddam, inspired by Margaret Atwood’s namesake trilogy of dystopian novels. At the helm is McGregor: a British superstar choreographer who has created ballets based on the works of other literary heavyweights, including Virginia Woolf and Dante Alighieri.

Atwood’s trilogy is prescient, set in a near future run by tyrannical corporations, blighted by climate change and ravaged further by a global virus that wipes out most of humanity. The large cast of characters ranges from biotech geniuses and sex workers to a hippie-like community of rooftop gardeners. Not to mention the novels’ non-human inhabitants, both the freakish animal hybrids spawned by genetic meddling and the beautifully eerie humanoids known as the Children of Crake.

McGregor’s MaddAddam is a co-production between the National Ballet of Canada and the UK’s Royal Ballet. And, while the companies have collaborated extensively in the past, this marks the first show to have its world premiere in Toronto rather than in London. To create it, McGregor has re-assembled the team behind his acclaimed Woolf Works and added a new collaborator: Atwood herself.

Here, McGregor talks about collaborating with a monumental figure like Atwood, why Toronto was essential to his vision and the wonderfully weird exercise of designing anatomically correct humans of the future. 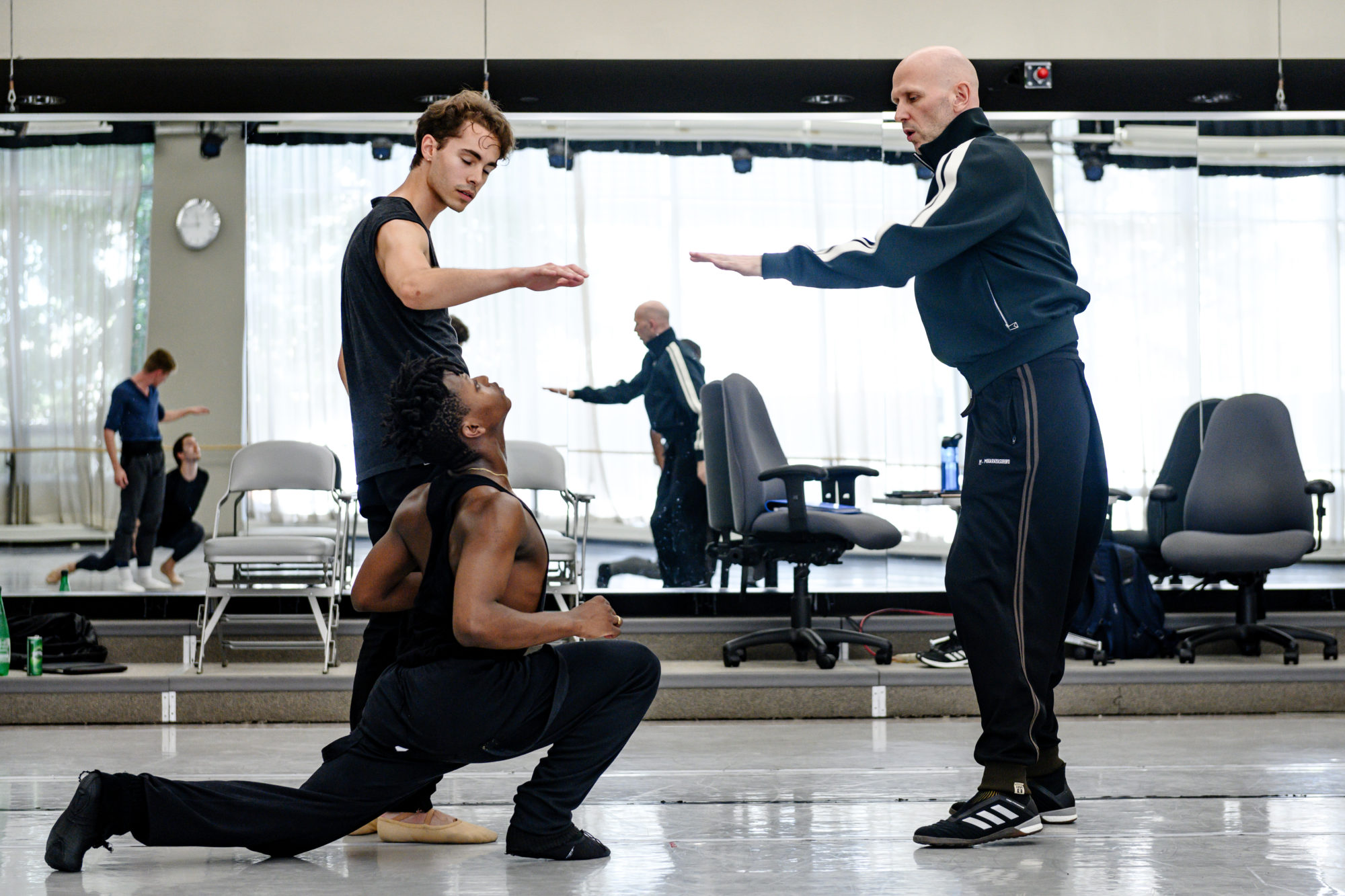 Who came up with the idea of turning the MaddAddam trilogy into a ballet?
I did. I’ve always been a big fan of Margaret Atwood. I was talking to Karen Kain, the National Ballet’s legendary former artistic director, and I said, “I’d really like to work with Atwood on a project. Do you know her?” And she said, “Oh, yes, let’s have a meeting with her.” So the three of us had breakfast when she came to see a piece I was doing in Toronto, Genus, which is about Darwin. She was super open to doing a ballet.

She’s written a lot. What drew you to these novels specifically?
They offer themes that are currently so important: environmentalism, the restriction of human liberties, gene splicing, AI, pandemics. Also, at the core of the novels are human-relationship stories and how we’re going to negotiate these things going forward.

How does one translate words on a page into a three-act ballet with dancers, music, lighting, and all that?
Dance doesn’t do concreteness very well, and Margaret’s novels are very plot-oriented, so we’re not at all trying to do a literal version of each of the novels. But we’re inspired by their world and environments and key themes, and we wanted to create our own response to them. 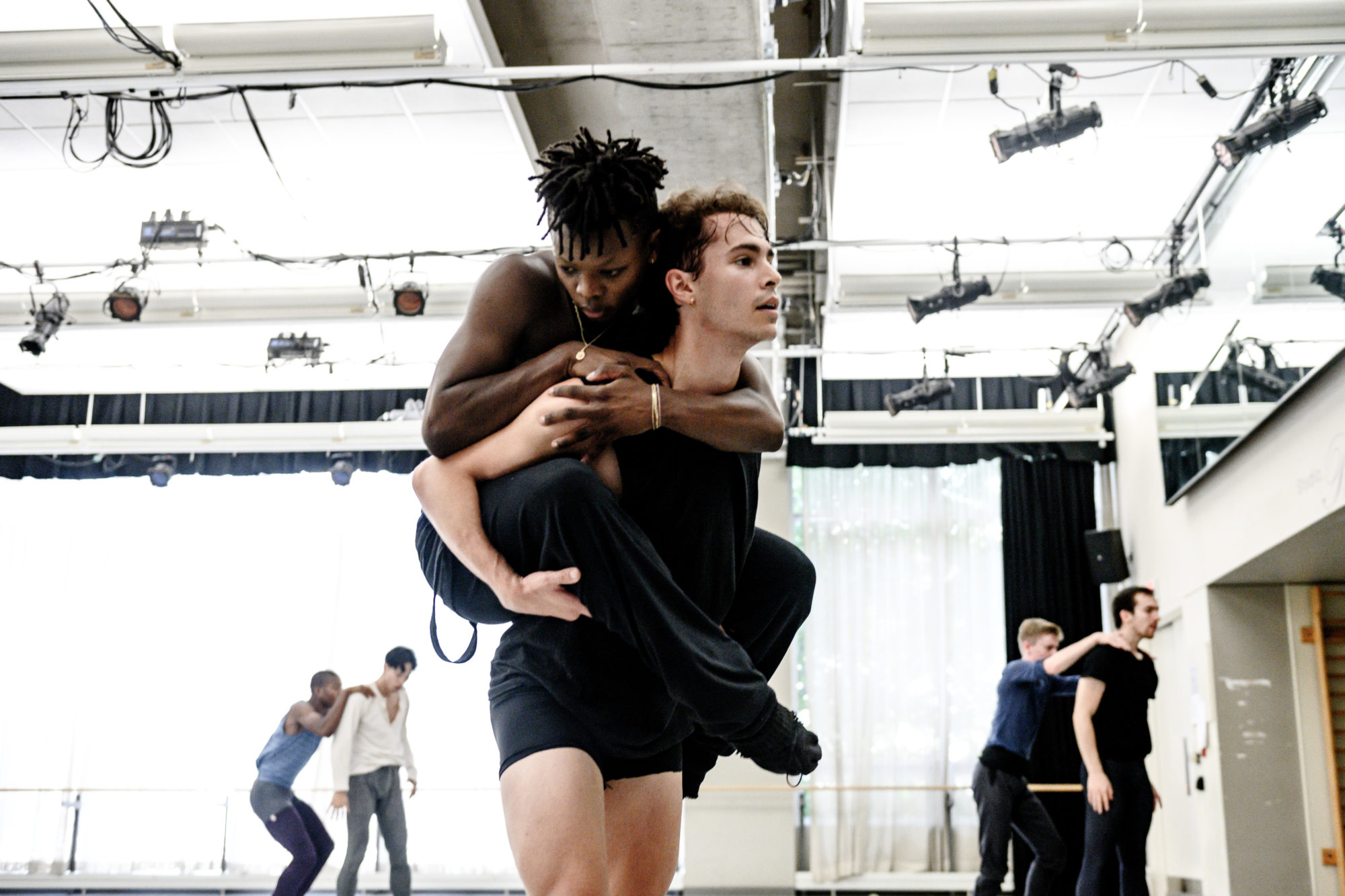 It sure doesn’t sound like traditional ballet.
I’ve been trying to find a way of breaking open some of the conventions of narrative in ballet, to find other ways of telling stories that aren’t only reenactments. I want people to feel like they’re living inside a novel rather than watching a replicated story. The emotional, psychological and thematic landscapes of a novel are all just as rich and important. There’s intense emotion in the MaddAddam trilogy—you go through a lot of brutality and awful situations, but at the end, there’s a sense of hope, of the possibility of a new kind of harmony. I love that. It’s not all bleak dystopia.

What kind of input has Atwood provided?
She’s given us plenty of artistic freedom and is quite open to how we might re-interpret the novels. She’s come to some of the rehearsals, but it’s not like she wants to approve of what we do. I think that, as a spectator, she wants to be surprised, to see her ideas expressed in a new way. We had a meeting with her and the composer Max Richter and the dramaturge Uzma Hameed, and I had a long Zoom with her during the pandemic, but she’s going to be a kind of willing punter in the end. I feel so lucky that she’s not controlling what we do. That’s best for the art-making.

I’m sure she’s as curious as the rest of us to know how you’re going to visualize her creations. Like the Children of Crake, with their unearthly singing and their genitals that turn blue when they’re ready to mate. It must be a challenge to bring such a vision to the stage.
And also for Max, our composer. With the Crakers, there’s this beautiful idea of the sonic way they communicate. You’ll see how we made it come alive. And Margaret kept asking, “How are you going to do the blue penises?” Ha! It has been a challenge, but we always knew it would. Our Pigoons, those human-organ-growing pigs, are quite extraordinary. Designer Gareth Pugh has crafted amazing costumes for them, which involve stilts and this very big non-human form. They look almost like a bruised ham hock, this big lump of meat. 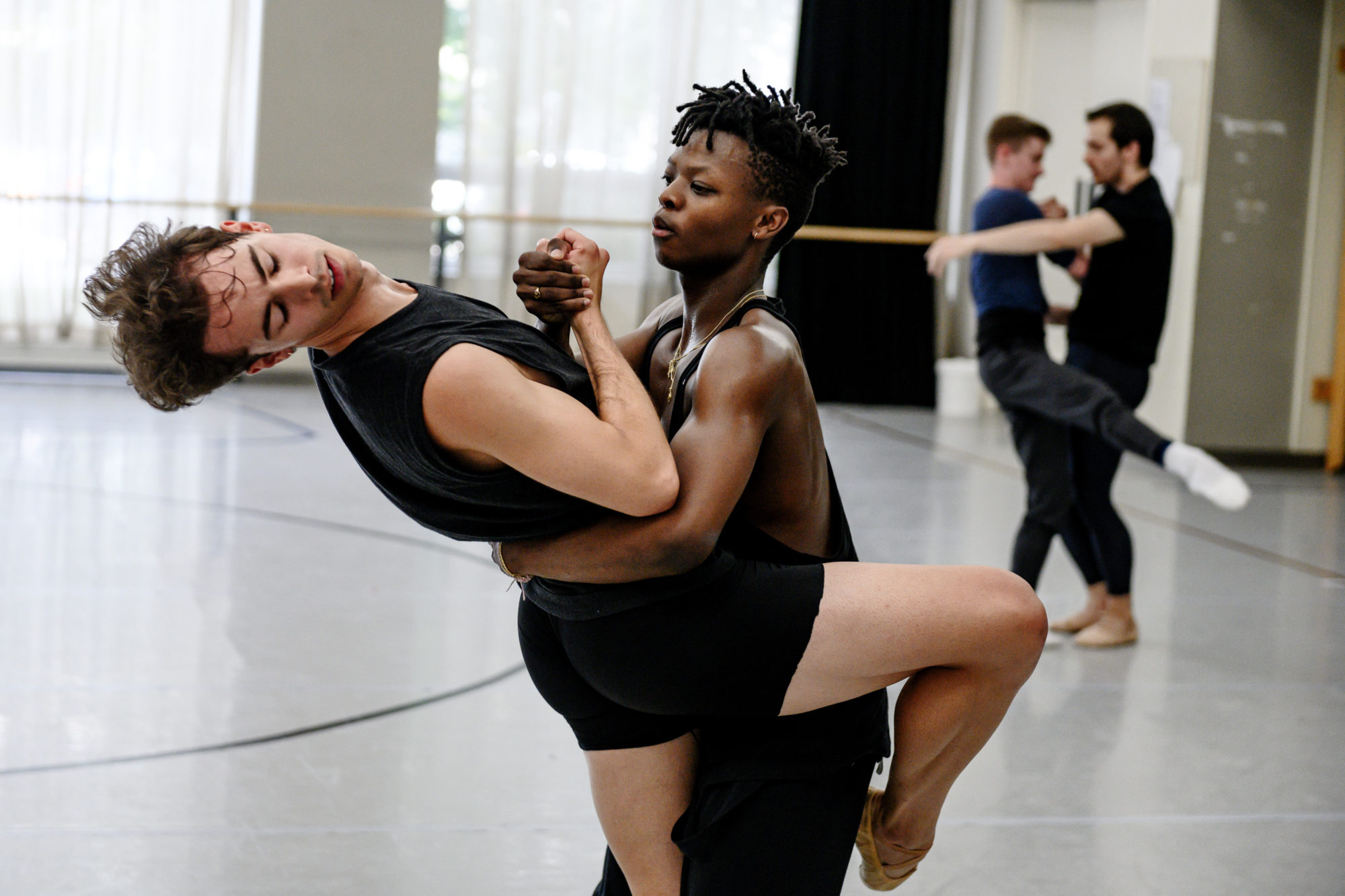 You have images of the Toronto skyline pinned to your office wall. Is that one of the design elements?
One of the reasons we wanted to develop this show in Toronto is because of that relationship between the city and the wilderness, which is not that far away. There’s a lot of Toronto and Canada that sits in the heart of these novels. We have a three-dimensional model of Toronto that hangs upside down onstage. And I’m working with filmmaker Ravi Deepres, who’s been collecting many documentary images for the show’s design. He’s done a huge amount of filming across Canada and in Toronto.

You’ve choreographed at the National Ballet before, but this is the first time you’ve created a work here with the company. How has that experience been?
I’ve worked with them on repertory pieces of mine, but it’s a very different thing creating with people. The dancers are so up for the challenge, which is really nice. They’re coming in super prepared—they’re so fresh and creative. I’ve got a big cast. We’re pretty much working with the whole company.

You’ve choreographed for some big movies—Harry Potter and the Goblet of Fire, the Fantastic Beasts franchise, Sing—and you also love experimenting with technology. Tell us about the ABBA Voyage concert you created in London this year using 3D avatars of the band in its ’70s heyday.
It was an amazing technical feat, the longest motion-capture performance of anything ever. I literally had to choreograph data. I’ve worked a lot with motion-capture in those big movies you mentioned, but this was the best I’ve ever experienced. I think we’ll eventually get to a point where we can use our own physical data to drive avatars in the metaverse. Or we’ll be able to take on the physical signature of someone else—which is very Margaret, when you think of it. 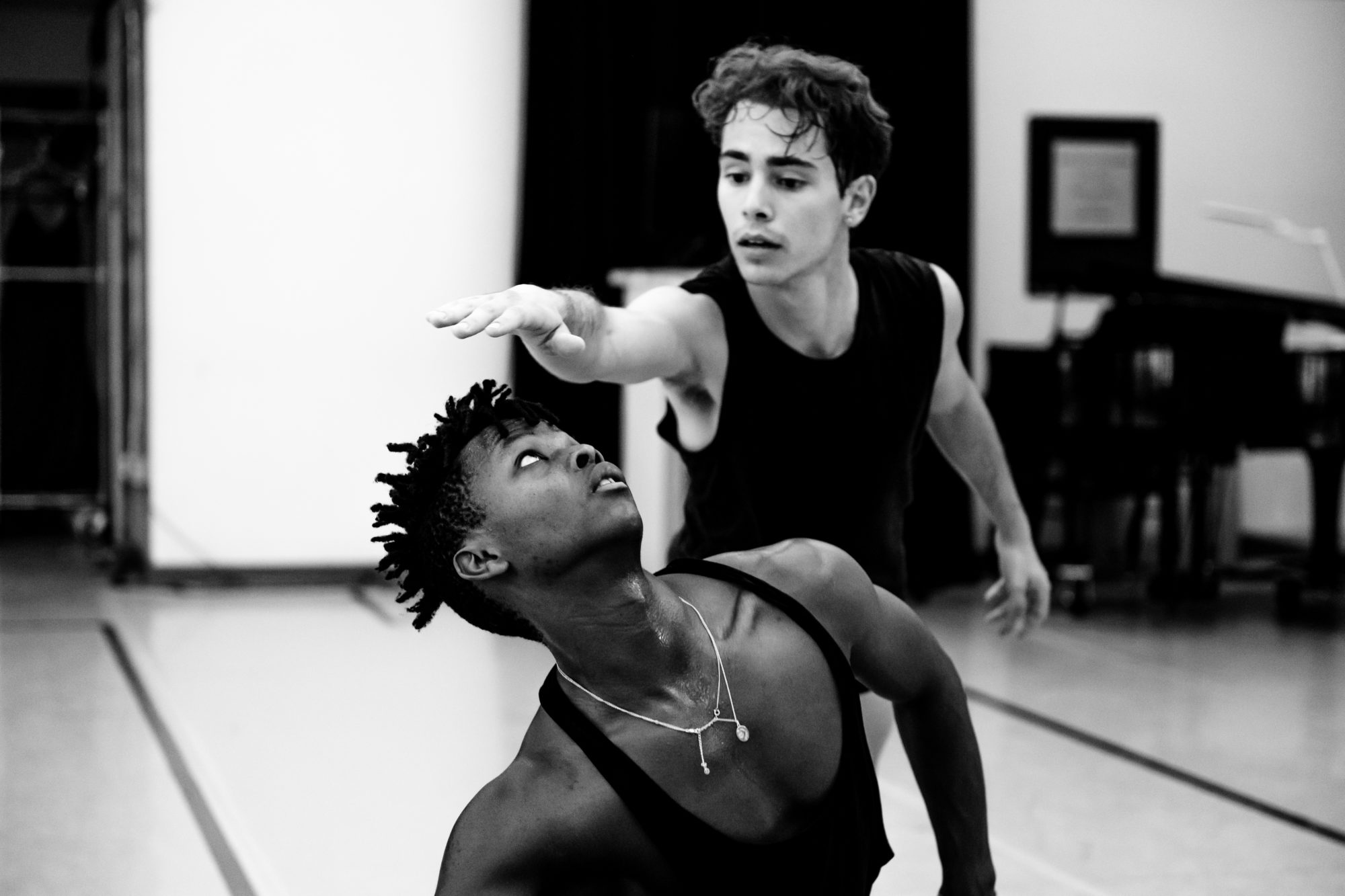 MaddAddam runs November 23 to 30 at the Four Seasons Centre for the Performing Arts.