We asked protesters why they hit the picket line on Friday 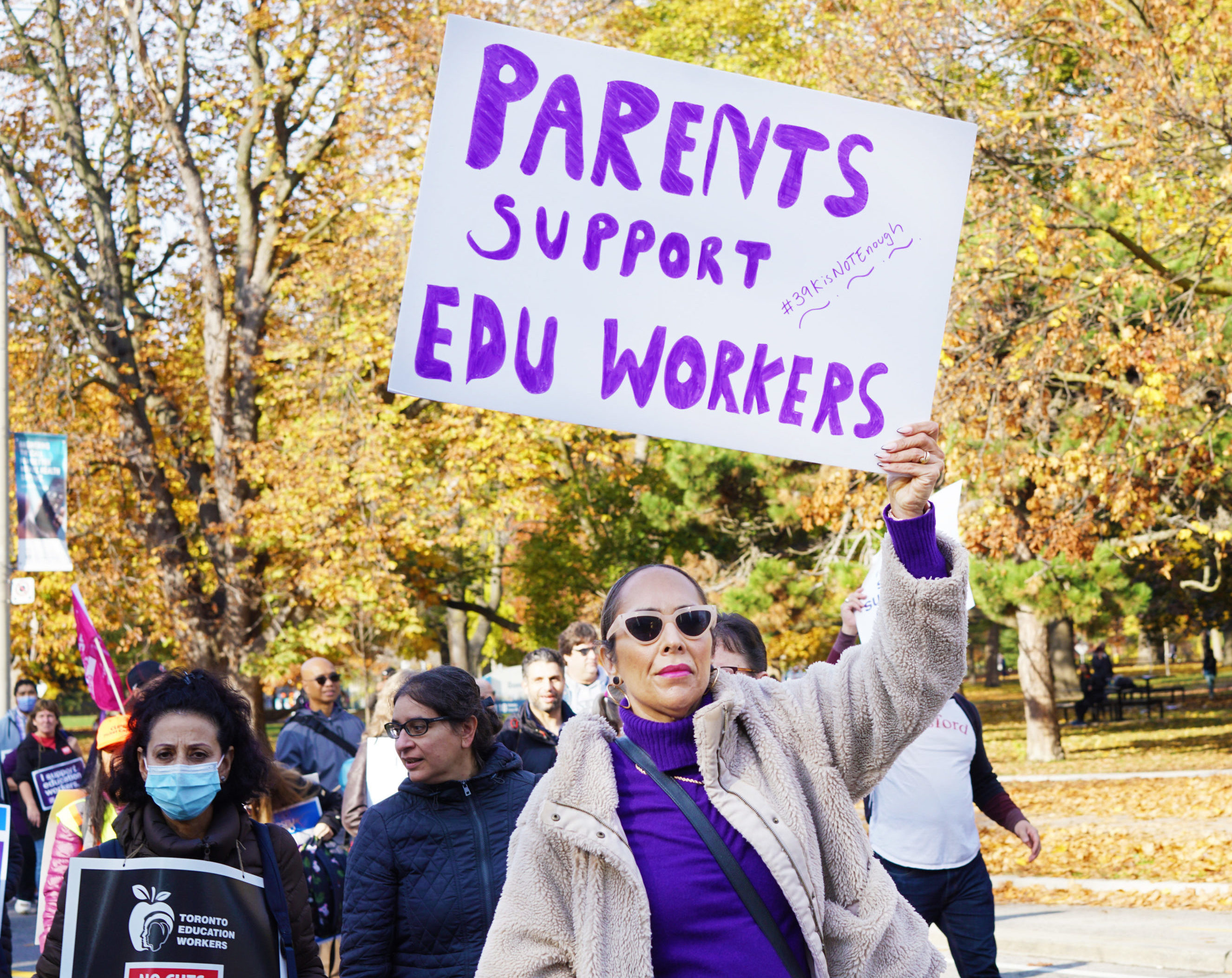 Fifty-five thousand Ontario education workers walked off the job on Friday—leading many schools across the province to close—after negotiations between the Ford government and Canadian Union of Public Employees (CUPE) fell through this week. In Toronto, hundreds of CUPE members and their supporters gathered at Queen’s Park to demand better wages and protest the government’s controversial use of the notwithstanding clause to override education workers’ Charter rights and impose a four-year contract on them. Here’s what they had to say about the strike. 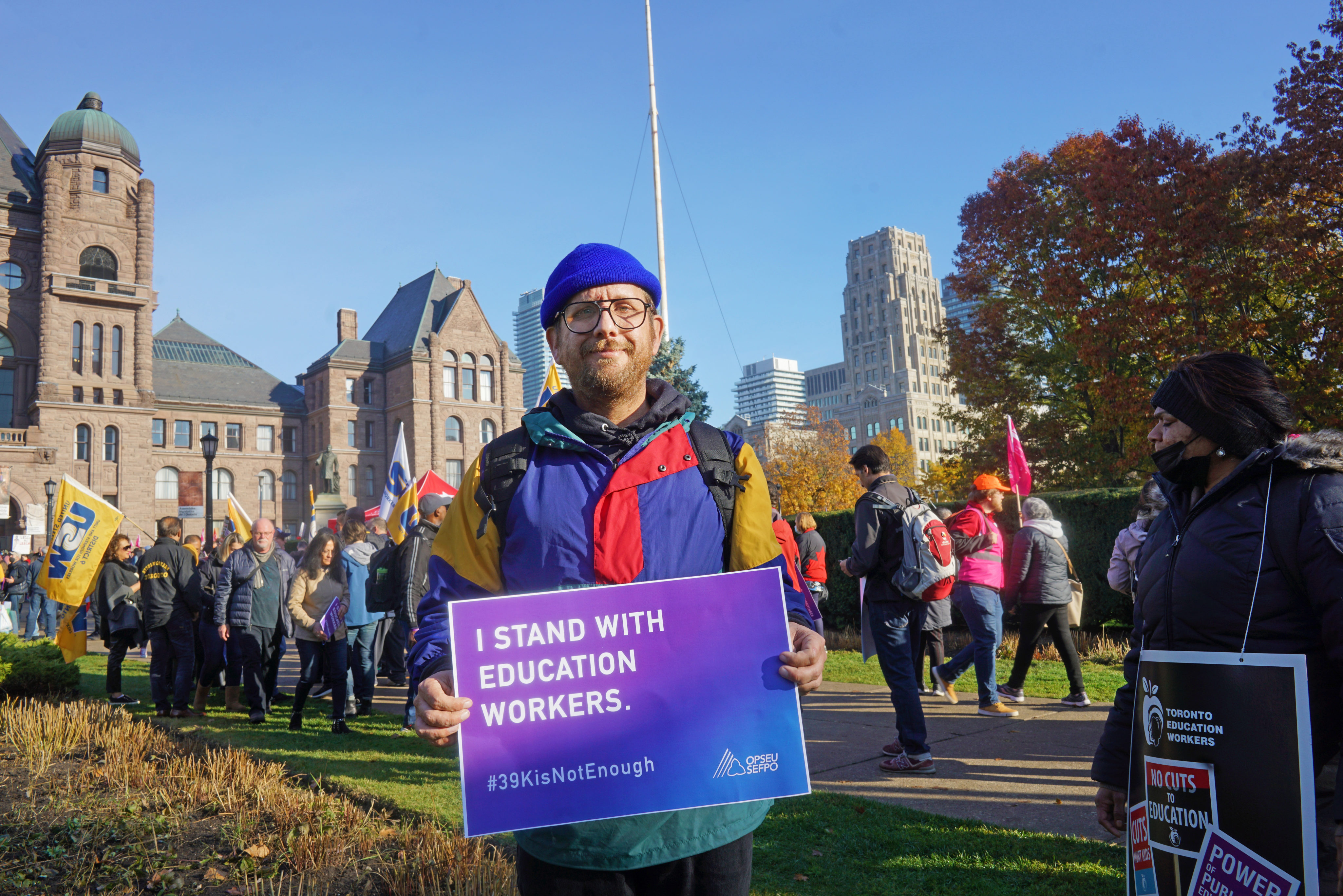 “I’m not here because of my wages. I just want to obliterate this notwithstanding clause because I feel like Ford is pushing his views on us. There is no way I can support a government that is willing to strong-arm workers like this. Everybody here is risking a $4,000 fine—since the government enacted Bill 28, a law that bans us from striking—which we obviously can’t afford. It’s a weird and scary time, but I’m glad so many people showed up to fight. Education matters. If our students aren’t properly educated, where is our country going?” 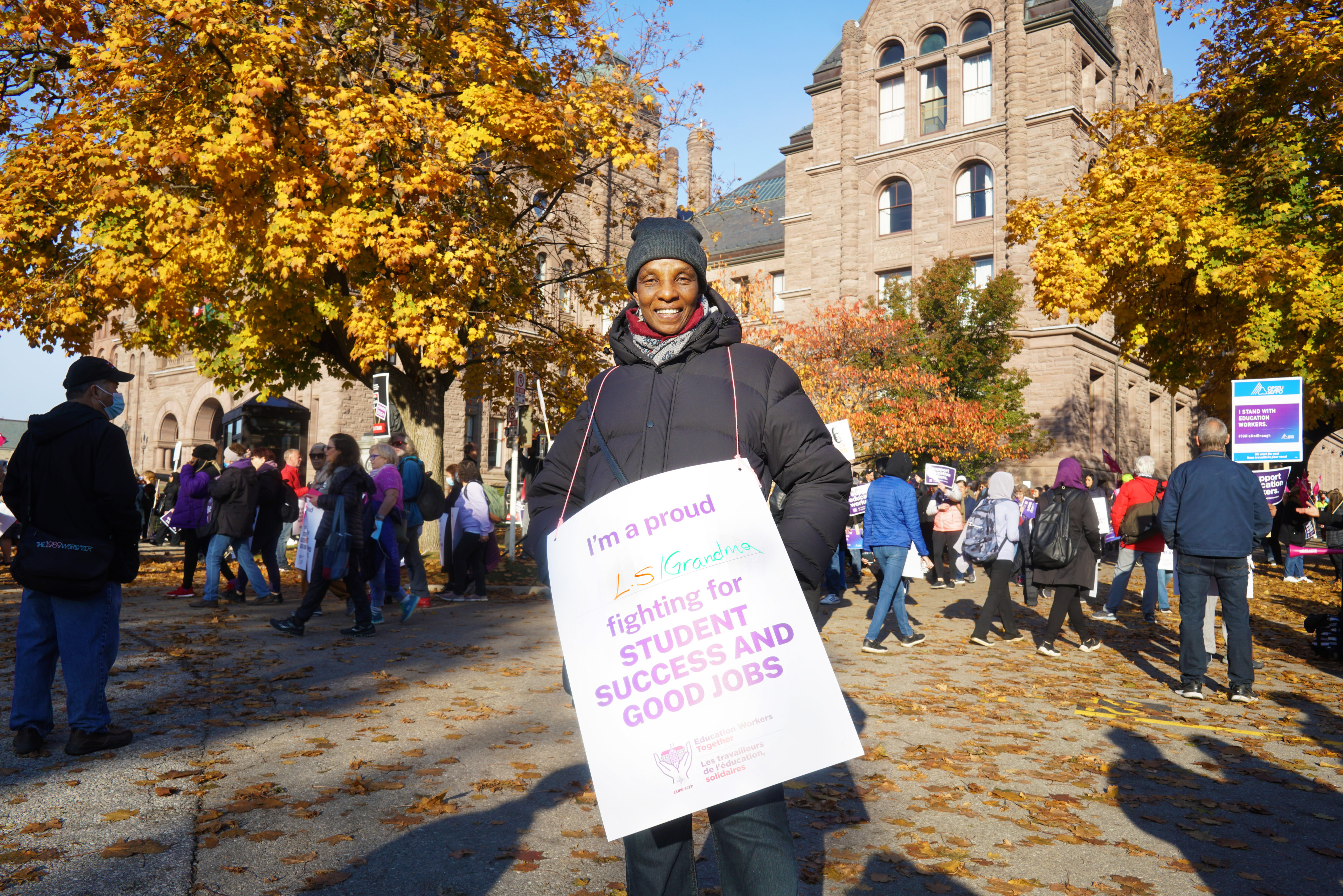 “We work hard. We take on the roles of parent, educator and caretaker all at once. And our responsibility is always growing. The other day, we had one person supervising 100 kids at recess. Our pay doesn’t reflect what we do, especially with inflation and a recession coming. Food and rent are expensive. I have my children and grandchildren to take care of, and it’s difficult to survive with this pay; after taxes, you have nothing left. Rich people like Ford and Lecce don’t understand what we’re going through. Parents will be stuck finding sitters for as long as the government doesn’t budge.” 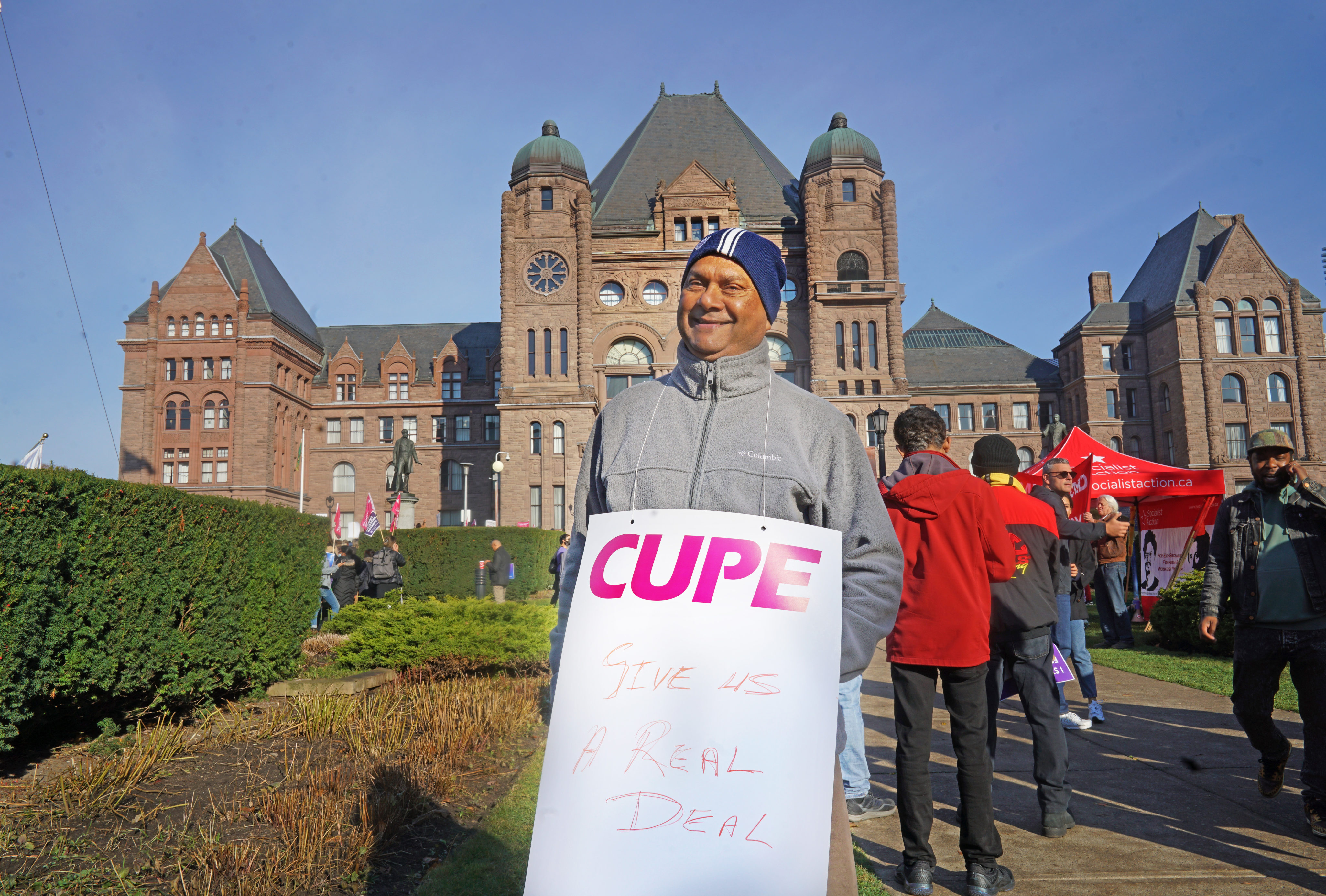 “Most of my co-workers feel that we’re underpaid. Lecce says that we have good benefits, but at the end of the day, we need money in our pockets to buy what we need. A 2 per cent wage increase isn’t a fair deal. We have to stand up for our rights.” 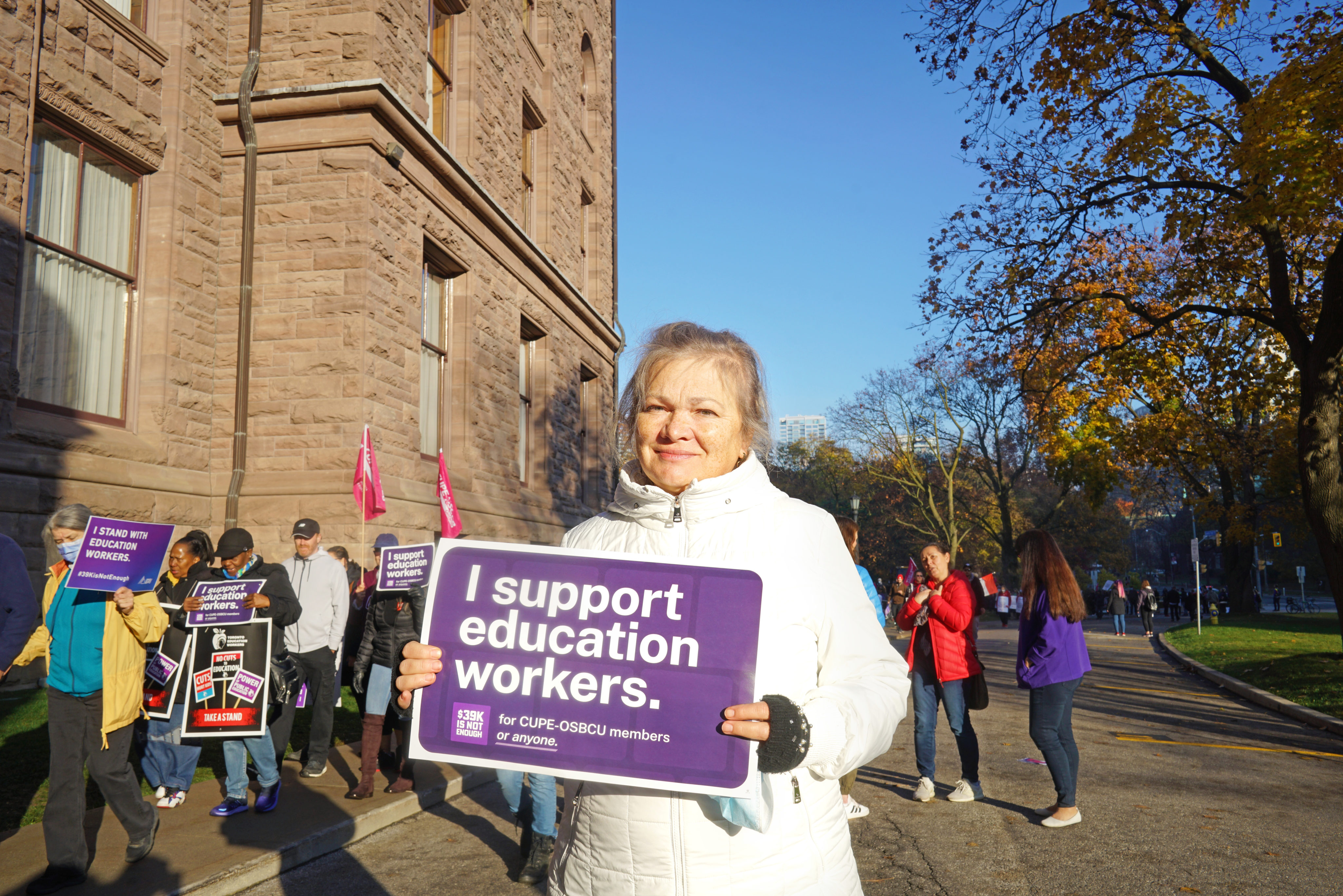 “My colleagues aren’t making fair wages even though they have tough jobs and do important work. Children are the future of this country. If they are neglected—if their individual needs as students are neglected—they won’t have the chance to grow. Some of those children could be leaders, geniuses and innovators who could do so much good. But they need a high-quality education. It’s time for Ford to show respect for the people who make our education system possible. That way we can create a better environment for kids to learn in.” 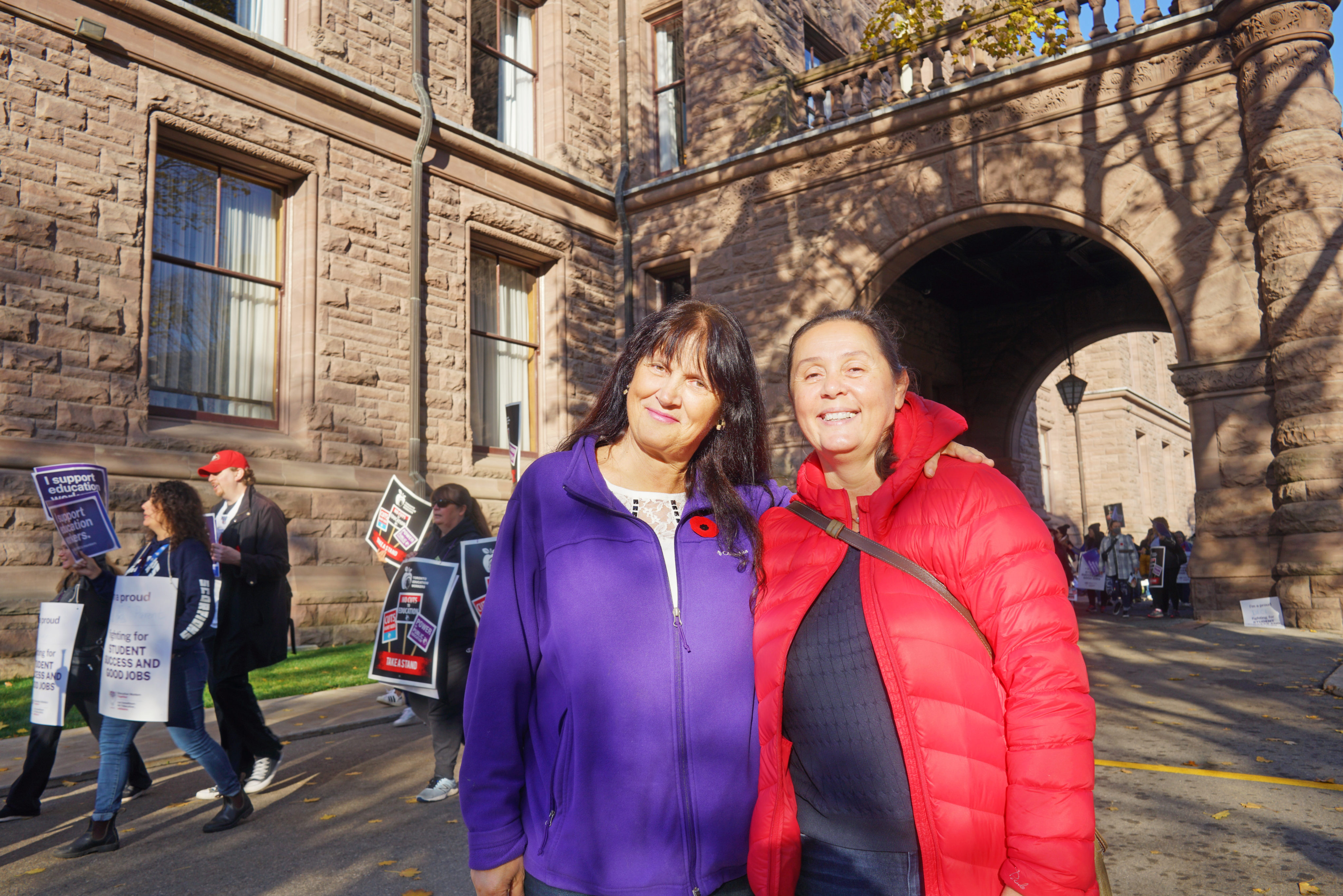 Rayna: “It’s about respect. How can education workers feel appreciated if they’re not being paid fairly? We’re expected to do so much: help kids with their learning, their extracurriculars and their mental health. We need a healthy and strong network of educators in order to teach kids how to think critically, be aware of the world and work hard. If we aren’t being taken care of, how can we help kids learn anything?”

Talia: “I want Lecce to come spend one day at a school and try caring for children like we do. Then he can decide whether we deserve more pay. It’s not as easy as he and Ford seem to think.” 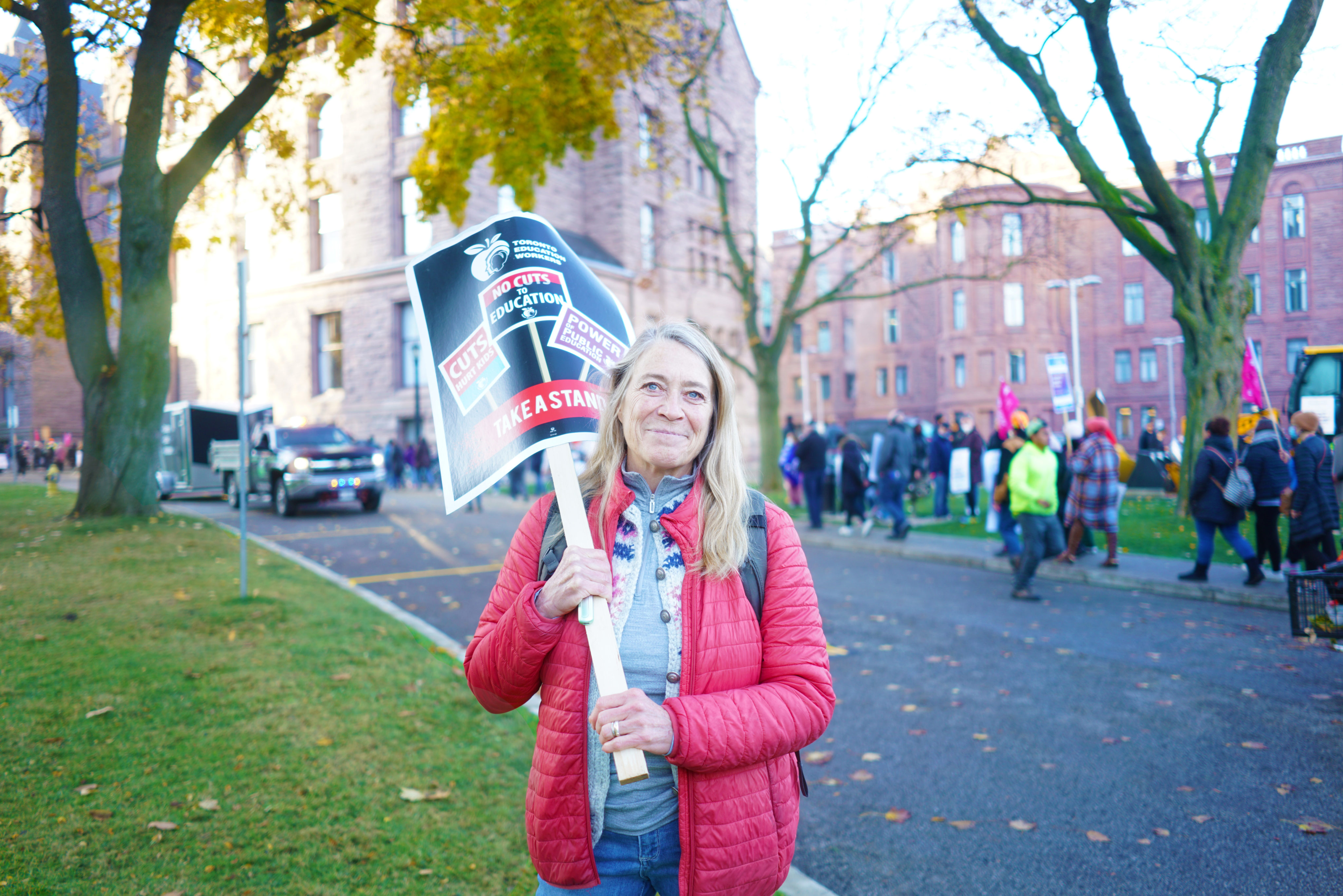 “Education workers’ wages have increased by only about 10 per cent over the past decade, and life has become much more expensive in that time. Inflation is tough, and housing prices have soared. The 11.7 per cent increase that the union originally demanded would mean that workers would get about an extra $20 per day. Ford wants bodies in classrooms so parents can go to work, but he doesn’t seem to care about the quality of education. You need to pay people properly for them to be engaged in work. Everybody in Ontario—especially unionized workers whose constitutional rights are being stomped on—should be absolutely horrified by his use of the notwithstanding clause.”