Our first date was supposed to be in mid-March—and then the entire world shut down. How we fell in love during a pandemic

Our first date was supposed to be in mid-March—and then the entire world shut down. How we fell in love during a pandemic 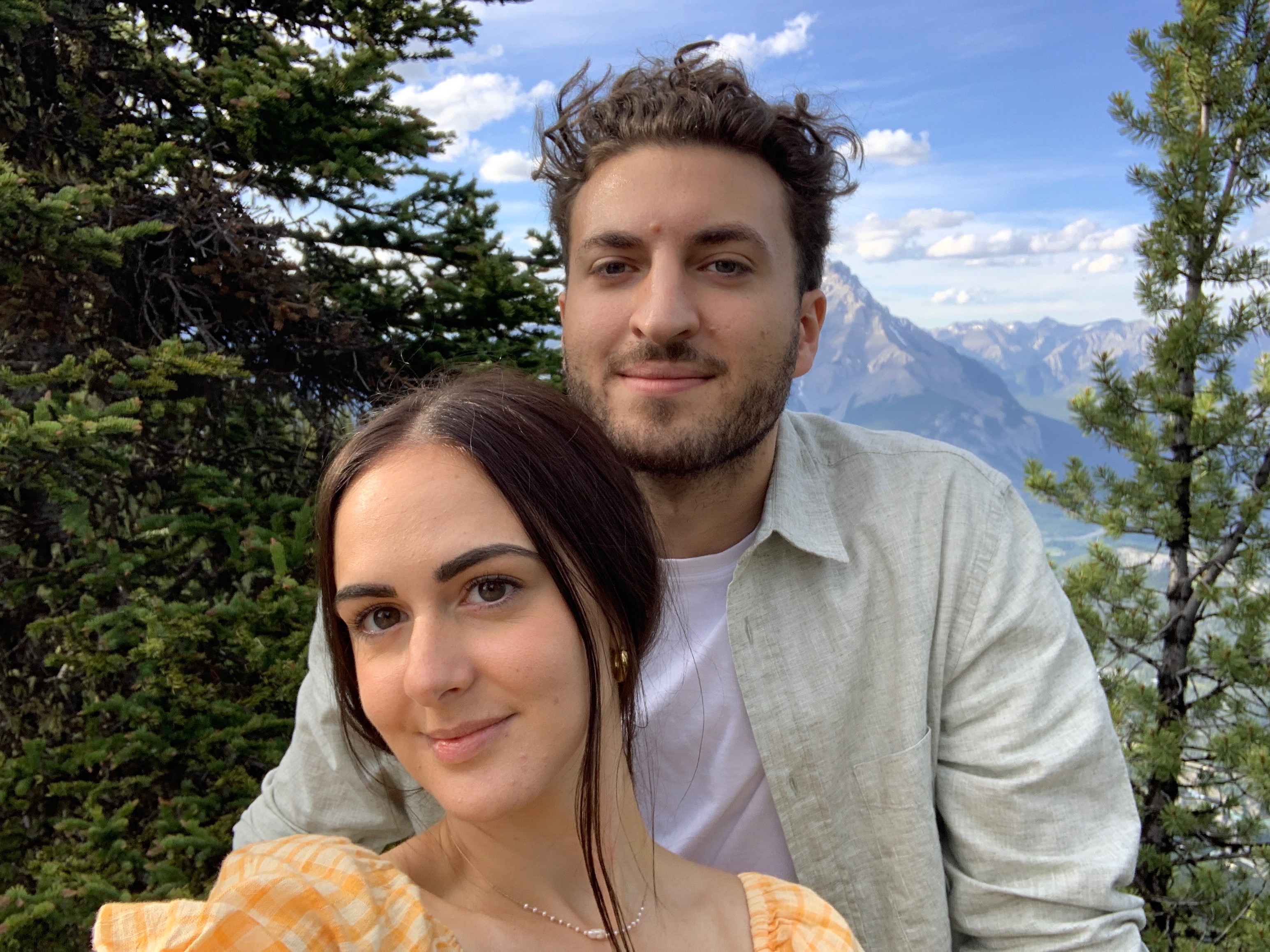 Graydon Welbourn and Nicolette Goncalves-Bot matched on Hinge in February. But before they could set up their first date, Covid-19 hit. Here’s how they navigated their new relationship through a pandemic.

Graydon: I moved from Calgary to Toronto when I was 17 to study history at U of T. Now I run a company that does recruitment for the cannabis industry. In February, I’d been single for just under a year. I was on Bumble and Hinge and went on dates once or twice a week. It was a regular part of my active social life, but I’m picky and hadn’t found anyone I liked.

Nicolette: I grew up in Oakville and moved to Toronto when I was 23. I studied commerce at Humber College and later found a job as an account manager at Canada Goose. Before I met Graydon, I’d been dating online for about a year, mostly through Hinge. I didn’t click with anyone. It was a lot of first dates.

Graydon: At the end of February, I matched with Nicolette on Hinge. I was like, Whoa, she’s beautiful. That’s the kind of girl I want in my life. She seemed fun and she had a good sense of humour. So I sent her a message.

Nicolette: Hinge has these message prompts that you fill out when you’re making your profile. One of them is “I’m looking for…” and my answer was “someone with an N64.” To be honest, that was a popular one for me. Everyone replied to that.

Graydon: It was low-hanging fruit. But I went for it. I responded with, “Super Smash Bros or Mario Kart?”

Nicolette: My response was, “Oh my god, you’re making me choose?” We started messaging from there, and right away it felt so easy to talk to him. He seemed fun, and he knew how to keep a conversation going.

Graydon: And you thought I was super handsome.

Nicolette: Of course! He has nice, bright-blue eyes. They stood out to me immediately.

Graydon: A few days after first chatting on Hinge, I asked for her number. Then a few days later, I asked her out on a date. But we kept having to reschedule. Things kept coming up.

Nicolette: We were still messaging pretty much every day. Finally, we were supposed to have our first date on March 11 but I had to cancel on him. Then, the next day, the entire world shut down.

Graydon: We didn’t reschedule our date because we didn’t know what we could do. I was kind of pissed, to be honest. I was excited to meet Nicolette and suddenly I had no idea when that would happen.

Nicolette: In my mind, I was like, Okay, well, this isn’t gonna go anywhere. What’s the point?

Graydon: But we ended up texting more just because we were both working from home and had more free time. I figured, If the best I can get is FaceTime, then I’m just gonna swallow the awkward bullet and ask her for a FaceTime date. I knew Nicolette likes to paint, so I suggested we do a paint night date. I ordered supplies from Amazon.

Nicolette: That was at the end of March. I was nervous, to be honest. I had a glass of wine before the date. And I got dressed up like I was going on a date. I put on jeans for the first time in forever.

Nicolette: We were trying to paint peaches with watercolours.

Graydon: Mine ended up looking like oranges, but Nicolette’s were good. I actually have them framed and hanging up in my apartment now. We painted, drank wine together and talked for six hours straight.

Nicolette: Afterward, when we hung up, I was like, Wow, that was way better than I thought it would be.

Graydon: After the date ended, I immediately texted her and I said, “That was the best date I’ve ever had.” On a FaceTime date, you’re not in the same room, so it’s a different kind of tension. You don’t have to worry about the whole who-arrives-first thing, and when you’re saying goodbye, you don’t have to worry about whether to hug or kiss the person. FaceTime dating removed a lot of pressure, so we could just be ourselves and talk, which is ultimately what you want to do on a first date anyway.

Nicolette: A week after that we had our second FaceTime date. We chatted for three or four hours. We both live alone—I live near Little Portugal, and Graydon lives near Yorkville—and we did apartment tours. For the date after that, Graydon ordered dinner to my house and then we ate together on FaceTime.

Nicolette: Our next date after that was when we met in person.

Graydon: I was the one who pushed the boundaries and encouraged us to break quarantine. I figured, if we don’t meet, what’s the point of this? And we both agreed. Because otherwise we were just becoming pen pals.

Nicolette: I had to trust him, and I felt like I could. We had to have real conversations from the get-go. I was like, “I need to make sure you’re not FaceTiming and dating anyone else.” Normally I would never say that to a guy on a third or fourth date, but I felt confident asking him. He said he wasn’t, and that made it easier for us to keep communicating.

Graydon: We went through the scare and intensity of the early pandemic together, and that built a significant amount of trust even before we had met.

Nicolette: I felt like I got to know Graydon through FaceTime, so it wasn’t just some person texting me to come over. Since neither of us were leaving the house, and neither of us had felt sick, I was a little more comfortable about it. So we met in person for the first time in early April.

Graydon: When I first saw Nicolette, I was so happy. I was like, Wow, this girl is even prettier than I thought. And she was the first person I’d seen in forever. So I was also excited about that. I hugged her right away.

Nicolette: I was a little nervous walking in, but we hit it off so quickly. I was impressed with the decor—it was much tidier than the usual man’s condo. He was a great host. We had some wine, and he made me dinner. It was pasta with shrimp. After dinner, we were talking about all the funny dances we’d been seeing online, like Megan Thee Stallion’s “Savage” and Drake’s “Tootsie Slide,” so we decided to dance in his living room to one of my R&B playlists. He asked me mid-dance if it was okay to kiss me, and I said yes.

Graydon: For our next date, I invited her over again because we couldn’t go anywhere. I made her dinner. Then we started doing different activities on our dates. One time, we made sushi by hand. We did an Easter egg painting night. We did a video games night where we played N64.

Nicolette: We were doing nice things for each other but we had to be creative since we couldn’t just go out and buy something. I baked him cinnamon buns because he mentioned he liked them.

Graydon: I have a severe nut allergy, so I don’t normally eat things that people bake. But I trusted Nicolette. And I survived.

Graydon: I was like, “No fucking way. That’s my favourite cereal.” Then I found a convenience store that delivered through Uber Eats and I sent her Multigrain Cheerios one morning with bananas and milk. That was back when I was really trying to impress her. I mean, I’m still trying to impress her.

Nicolette: At the beginning of May, I was supposed to go to Miami with my friends but the trip got cancelled. I said to Graydon, “I bought all these nice dresses for the trip. I don’t even know when I’m gonna be able to wear them.”

Graydon: So I said, “Well, let’s have a fancy date night.” I got dressed up in a tuxedo I had from another event, and Nicolette wore high heels and a beautiful dress. We ordered fancy Italian from a place in Yorkville. We danced and I played piano. It was fun.

Nicolette: One night, around the end of May, we were having dinner at Graydon’s place and I suggested something we could make.

Graydon: I said, jokingly, “Oh, my girlfriend is such a genius.” And then she looked at me and was like, “Excuse me? You just called me your girlfriend.” Then I was like, Oh, shit.

Nicolette: I was kidding. I was happy about it. I was like, Finally. I also wanted to be in a relationship, and I was happy he’d said it out loud.

Graydon: I knew early on that she was the girl for me. I’d been planning to go back home to Calgary to visit my parents at the beginning of July. So I invited Nicolette to come with me because I wanted her to meet my family. They loved her, which was really, really nice. My mom and Nicolette basically became best friends. We just got back from Calgary, so we’re holed up in my apartment for two weeks now, because that’s what you do after you travel.

Nicolette: We travelled for two weeks together, which was a big test for our relationship. It was funny: we realized that we had our first dinner date in Calgary because the restaurants had opened up there before they did in Toronto.

Graydon: When you meet someone during a pandemic and go through the whole thing with them, your connection becomes so much stronger. I trust Nicolette with everything. Some people would say our relationship moved fast, but I don’t feel that way at all.

Nicolette: I agree. I don’t feel like it moved too fast—it was just that we were able to focus on each other. The problem with dating apps is that there are so many options, so it’s hard to slow down. It was nice to get to know someone without those other distractions around us.

Graydon: If it was the real world, Nicolette might be talking to a few other guys and going on dates with them, and I might be doing the same with other girls. But because of the pandemic, that wasn’t happening. I tell Nicolette all the time that if we can get through 2020, we can get through pretty much anything. We’ve been living a lot of life together in a short amount of time.