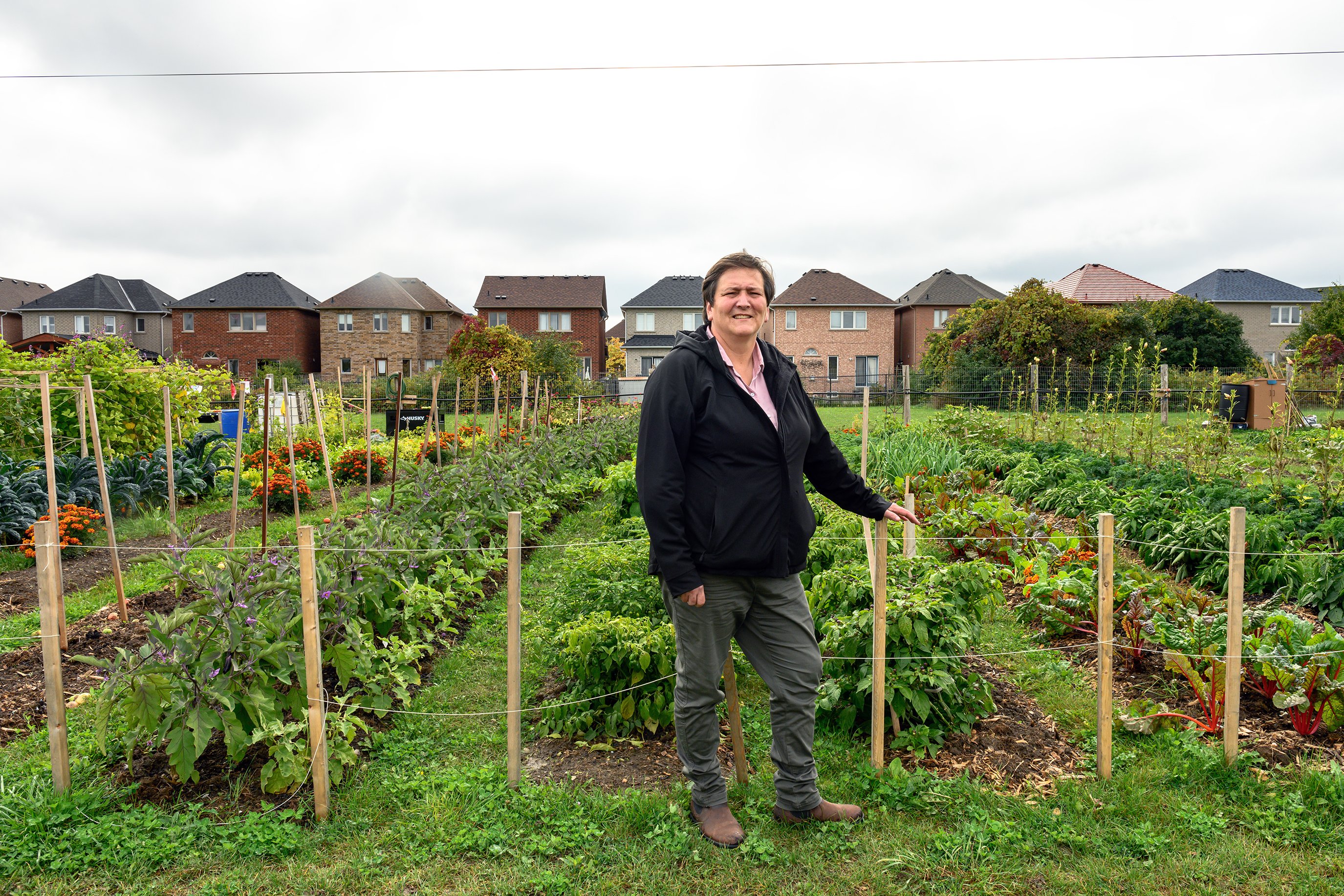 As a volunteer with the Malvern Family Resource Centre, Anna-Marie Burrows helped create a two-acre urban farm, plowing the field herself, fighting for permits and recruiting farmers. Here’s how it all came together.

“As a farmer, you know the soil is ready for planting when you can run your fingers through it. The soil has to lose its form to take up water. My mom and dad used to know the soil was ready by the smell. I’m not that good. My family were vegetable farmers in Jeannette’s Creek, a small community just south of Chatham. We grew about 30 acres of red beets, 30 acres of carrots and 10 acres of potatoes. I remember working on the farm as a child, weeding, harvesting. It was hard work, but I never wanted to do anything else.

“I spent most of my career at the Toronto Zoo as the manager of horticulture and grounds. In 2019, after 13 years, my role was restructured and I was let go. I was devastated. Through the zoo, I’d come to know and love the Scarborough community. At the time, I sat on the board of the Malvern Family Resource Centre, or MFRC. That October, Girmalla Persaud, the centre’s executive director, approached me with a proposal. In 2016, she told me, had acquired a sublease agreement from Toronto Hydro to repurpose two acres of land along the hydro corridor into a farm, but they were having difficulty getting it off the ground, so to speak. The hydro corridor, which has a laneway for cyclists and bordering electrical towers, was mostly an empty field. People thought it was a dog park. They needed permits to till the land, embed a water line, map the plots, and build a fence. Girmalla needed someone to handle the paperwork and prepare the land for farming.

“The project—known officially as the Malvern Urban Farm—comes from Toronto’s community engagement and entrepreneurial development program. Funded by the Weston Family Foundation and United Way, it’s meant to address food insecurity in the area and enable community members to supplement their income through farming. My dad always said, ‘You can give a man a fish or teach him how to fish.’ The same principle goes for farming.

“When I came to the project, the land had been untouched. The soil was as tough as a baseball—you could chuck it across the field if you wanted to. I knew we could make it arable with the right compost. We just couldn’t waste another growing season. At the time, my daughter was a a third-year student at the University of Ottawa studying political science, and she had a studio project where she could provide support to a community agency. I said, ‘Okay, perfect. I need someone to analyze how other urban farms are running, the network of urban farms in Toronto, and potential markets for farmers.”

“The first thing I did with was dig into the soil. By then it was April of 2020, and the pandemic had struck. Non-essential work was halted, and we could only gather within our families. So, I hitched a rototiller to my truck, and my husband, son and I plowed the field ourselves while our dog trotted alongside. It took six days in total, and it was excruciating. Our shoulders killed us. 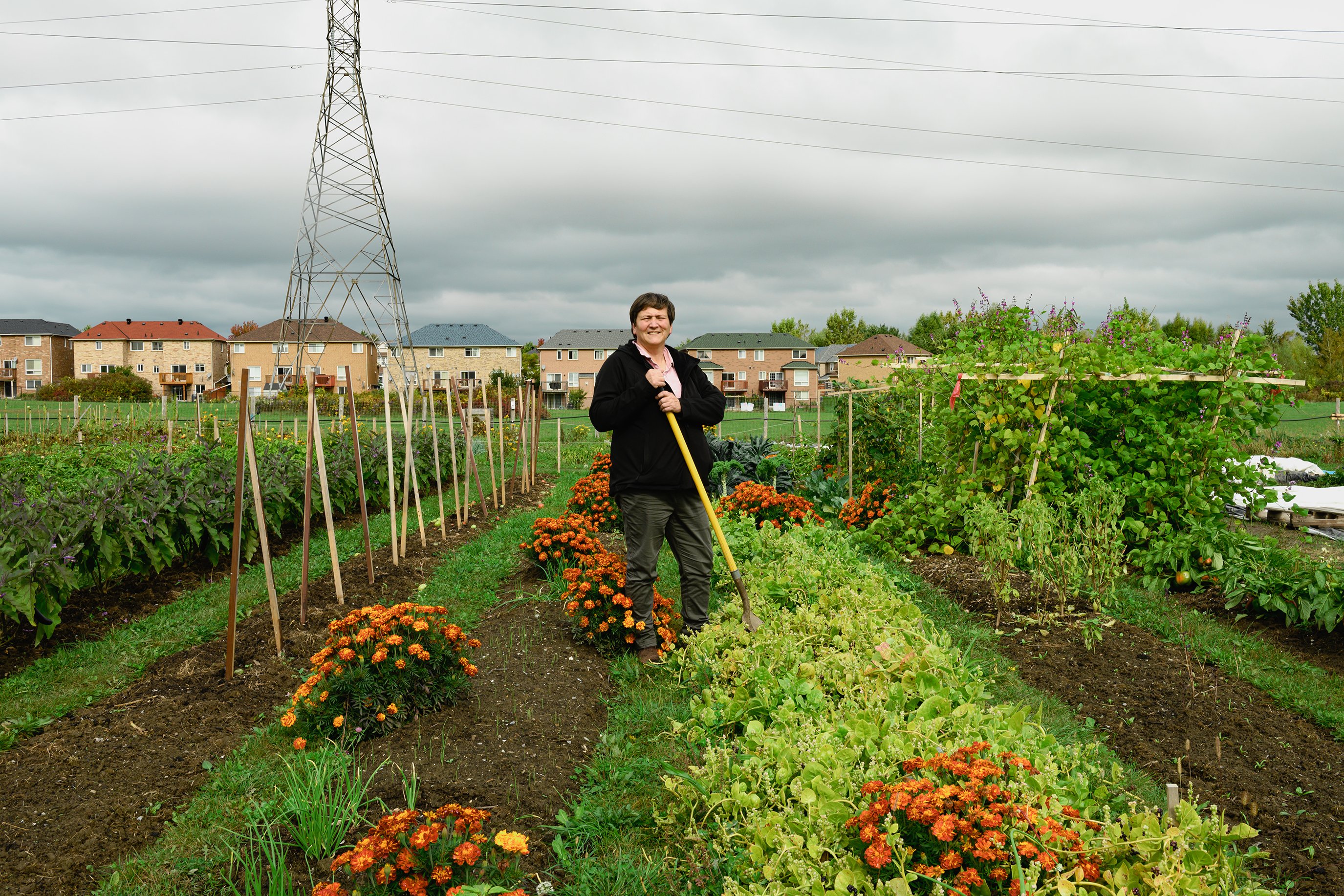 “By the end, we had 16 plots of land, each 10 rows and 50 feet long. There were walkways between plots, and the soil was dug four inches deep. At first, the fear of the pandemic loomed over the neighbourhood, and we had a hard time getting people interested. Malvern was among the areas worst affected by Covid—it’s largely made up of working-class immigrants, many of whom are essential and front-line workers. As soon as we started putting up the fence, however, curious residents started asking me what was happening. One by one, families claimed each plot. Some neighbours shared a plot, and we reserved one for Native Child and Family Services Toronto.

“Our first growing season was spring of this year. By this point, I had gained employment as manager of grounds and maintenance with Metrolinx, but I still volunteered at the farm. I wanted to see it through. We provided each set of farmers with seeds to grow basic crops such as tomatoes, onions, and potatoes. Many people brought their own seeds—some I haven’t even heard of, like wiri wiri, a South American chili pepper. One plot even grew jute. I would drop by to mow the lawn every weekend. Regardless of when I arrived, whether it was 7 a.m. or 7 p.m., someone was always there kneeling before their crops. 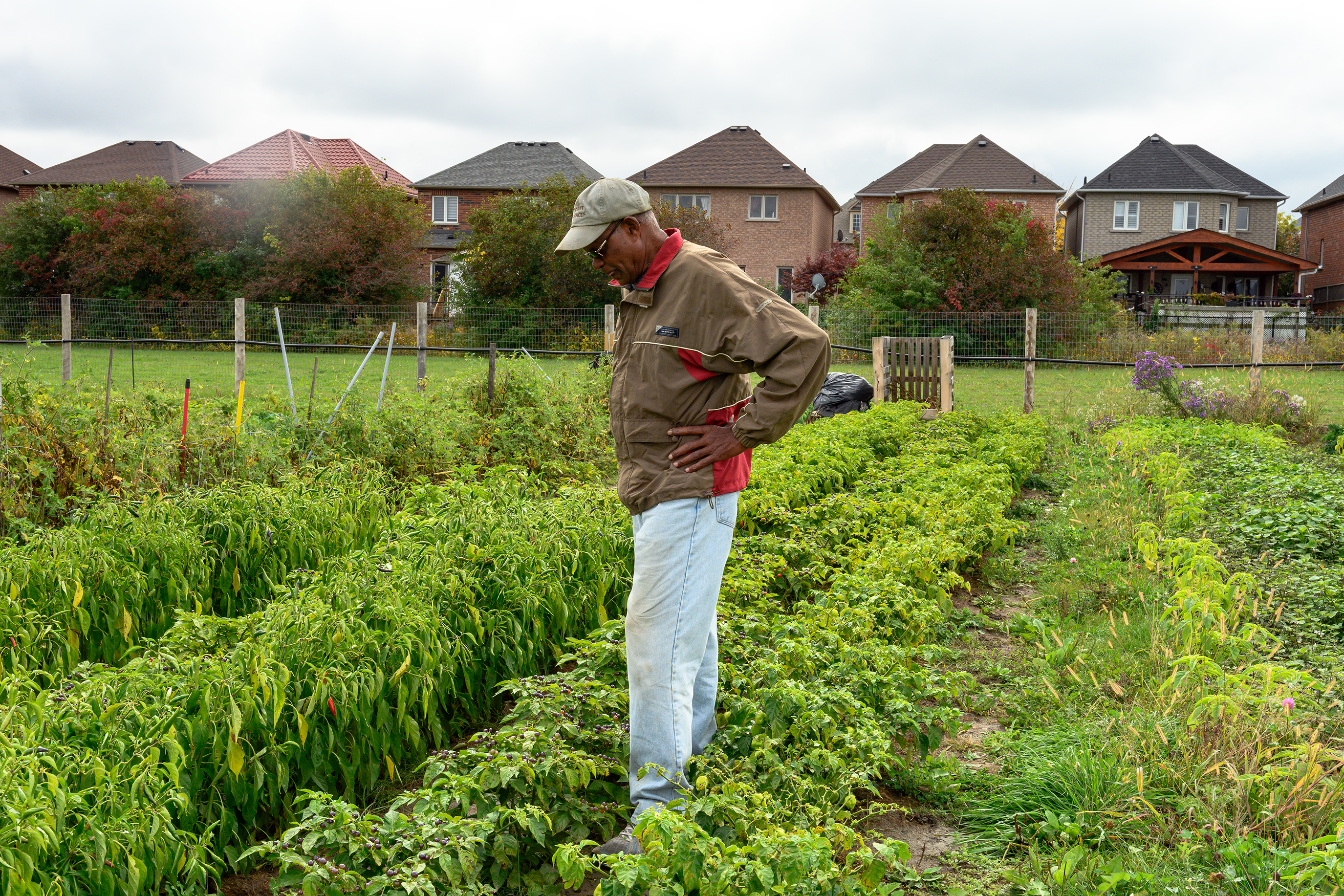 Krishna Velupillai, a 61-year old father, grew up on a farm in Kilinochchi, Sri Lanka. He came to Toronto in 1991 as a refugee and has lived in Scarborough for more than 20 years with his family. His little patch of grass reminded him of his memories from back home.He instinctively knew to grow tomatoes and leeks together, and that spinach should be planted a palm’s distance apart. Another tenant farmer, Mark Persaud, coined his plot ‘Luka’s Urban Farm’ after his dog. Every weekend, his 14-year-old daughter, Alexia, goes to every farmer’s market with Luka in tow, selling eggplant, Spanish onions, leeks and kale. Alexia ensures that a fraction of their proceeds go to the Toronto Humane Society.

“There have been plenty of challenges along the way. For one thing, there was no water line for nearly the entire growing season. The engineer we hired to conduct the work fell through in June. We were finally able to install a water line, but it was too small at first, and we needed to send new landscape design drawings to the city for approval. By the time we received the proper permits it was August, the end of the growing season. Farmers made do by carrying large bins of water from their homes to the farm. I remember monitoring the sky and feeling relieved every time it seemed it would rain.

“Meanwhile, Toronto Hydro prohibited us from building permanent structures on the farm. This meant, there was no storage area for people’s tools and, most importantly, for the rototiller, which I was forced to keep in my garage. I would try to drive the rototiller to and from the farm, but it wasn’t always possible. You just can’t have a farm without a storage unit. I couldn’t even put a shade structure up—no umbrella, no canopy, nothing. I’ve driven past hydro corridors with permanent structures and gotten out of the car just to snap photos to share with the city, but we still don’t have a permit for them.

“But next year will be better. We have the water line, and I’ll fight for those permits. We have enough funding to get us through to 2022 and are looking to shift power over to the farmers. We eventually want the farm to be run and sustained by the community. We’ll just have to be creative with money. This year the Toronto Zoo helped me lay out the gravel for the driveway so we didn’t need to hire anyone. An employee at a printing press in Guelph donated 24 copies of a book on small-scale farming. Everyone wants to see the farm succeed. We just need a few good partnerships.

“Fifteen years from now, I’d love to see the farm four times bigger at eight acres. The land is there. We can bring on new farmers each year ,and invite school groups to manage plots as part of their curriculum. I want to have a farmer’s market on the property, where people can share cultural recipes with live instruction. We could even make a Malvern Urban Farm cookbook. I also see the farmland surrounded by community gardens so that people can also grow their own fruit. Indigenous community members can teach farmers about the medicinal properties of plants and the history of the land they’re cultivating. I see the farm being a real spoke in the wheel of the community.

“Even since I was a kid, I’ve want to help people find their way through food. There’s nothing like eating from your plate and knowing what’s on it, especially after a year that has taken so much from us. The soil has everything we need.”

An earlier version of this story misidentified wiri wiri's origin.