Editor’s Letter: The real cost of the rental crisis

Editor’s Letter: The real cost of the rental crisis

If living in Toronto ceases to be affordable for everyone but the rich, we all lose so much

In 2018, I moderated a roundtable on the state of the real estate market. One of the participants, a prominent agent, was candid about where he saw things heading. Toronto, he said, was becoming like Manhattan: a place for renters, not owners. As a city approaches greatness, density increases—all those people drawn to all that greatness—competition ramps up and the dream of home ownership fades. Torontonians just hadn’t realized it yet.

Was he right? Back then, the cost per square foot to buy a condo was $1,000. Today, it’s roughly $1,400. So, yes, he had a point. But here’s what he didn’t see coming: renting has become equally unaffordable. That’s a problem with frightening implications for every Torontonian.

For this month’s cover story, “Give Me Shelter,” Toronto Life’s deputy editor, Lauren McKeon, oversaw a team of reporters who dug deep into the high costs and subpar conditions for renters. The stories that came back were shocking.

Just getting started in the rental game is demoralizing. Right now, apartment hunters have to compete with a swarm of suitors just for the chance to rent. Palm-­greasing and frantic upbidding are common. And what prospective renters are fighting over often isn’t all that special: sometimes it’s a dumpy one-bedroom in an ordinary building. For all that trouble? The privilege of handing over a staggering $2,481—the average rent for a one-bedroom when we went to press—every month. The lucky renter then lives in constant fear of being renovicted, having the rent jacked up with little notice (for any building completed in late 2018 or afterward) or being made to feel so unwelcome in their home that they choose to leave. When they do, they’ve accrued no equity—they’ve only lined someone else’s pocket. Then the process repeats itself, but this time, they’ll probably pay even more money for less square footage. 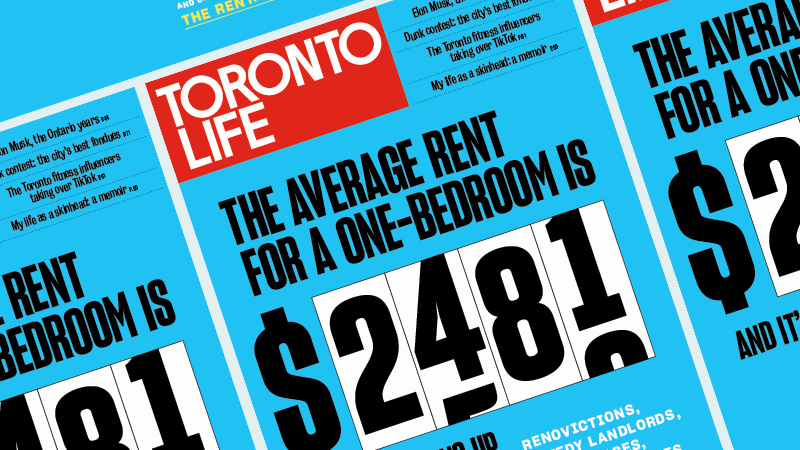 Any urban planner worth listening to knows that the key to a thriving metro­polis is variety. No one would want to live in a city of only skyscrapers, just as a city of only single-family detached homes is shapeless and forgettable. By the same token, a city that’s accessible only to the wealthy is soulless, sterile and boring. Unless something changes, Toronto, for all its success stories and points of pride, risks becoming just that: a city where only the upper-percenters can afford to stick around. This phenomenon used to be called “the missing middle”; now it’s more like the missing two-thirds. That’s a massive, indispensable group that includes people from all walks of life—the young, the old, entrepreneurs, artists, risk takers, dreamers, future luminaries and icons. If they can’t stay, we all lose so much.

This problem emerges elsewhere in this issue. As John Tory tells us in our questionnaire with GTHA mayors, his number-one priority for his third term is tackling the affordability crisis. As actor Andrew Phung says in his Q&A, the suburbs and parts beyond—Hamilton, Scarborough, Pickering, Stouffville—have become sanctuaries for creative, innovative, entrepreneurial expat Torontonians who have been priced out of their city.

Remedies are as varied as the people who support them. Premier Ford wants to pave over parts of the Greenbelt (a solution that begets more problems); Mayor Tory wants to send affordable housing into hyperdrive. Housing advocates are clamouring for stricter rent control; developers insist that rent control would decrease the supply of rental stock. The clock is ticking. For the people we interviewed, some kind of relief—in whatever form—can’t come soon enough.

Malcolm Johnston is the editor of Toronto Life. He can be found on Post at @malcolm.