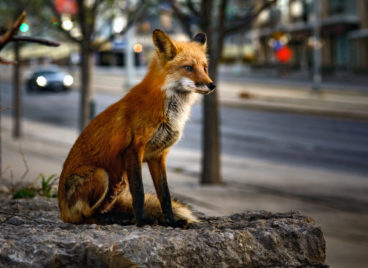 With humans on lockdown, urban wildlife is coming out to play. Fox sightings—in the Beaches, near Bay and Adelaide, around the CityPlace condos—are one of the most unexpected and delightful side effects of the pandemic

Ever since the lockdown, Torontonians have been reporting wildlife sightings in surprising places. We all heard about the baby foxes in the Beaches that were drawing crowds when no one was supposed to be congregating. I saw a red-tailed hawk swoop down at Bathurst and Queen in hot pursuit of a pigeon. I read about beavers walking the banks of the Don River and deer running along the beach in Bluffers Park. I’ve photographed animals in Nunavut, Congo and the Galápagos Islands, but I never expected to shoot wildlife in downtown Toronto. With some tips from a friend who did a deep dive on Instagram, I finally found a family of foxes hanging out around CityPlace, south of Front between Spadina and Bathurst. Typically it’s one of the busiest, noisiest places in the city, but now, of course, it’s pretty quiet.

That said, the first time I went down, armed with a long lens, it was late afternoon, and a crowd of locals, desperate for entertainment, were hovering around the foxhole. The onlookers were loud, and the foxes didn’t come out. I researched fox behaviour and learned that the best time to catch them in action was early in the morning, when the fox parents return with food for their pups. So I set my alarm for 5:45 a.m. and headed down to the hole and waited. I did this three times, sitting silently for 45 minutes at a stretch, waiting for the light to be right and a fox to emerge. Just after six o’clock on my second visit, I saw the dad come back to the hole with a rat in his mouth. The baby foxes came out, jumping around in the bushes, excited for breakfast. I took a few shots, but it was a bit cloudy, and I wasn’t getting the light I wanted. On my third visit, the sun was just up, the mother fox came back to the den with a rat—an upside of the exploding fox population in Toronto might be solving the rat epidemic—and the cubs greeted their mom hungrily.