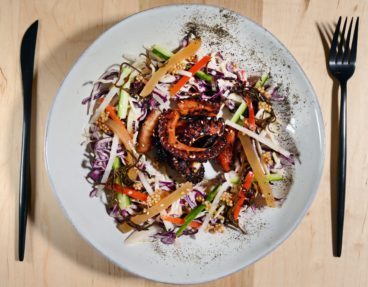 Let’s hope Doma survives the curse of 50C. The Little Italy address is a revolving door of restaurants—it was previously home to Backwoods Smokehouse and Whisky Bar, Red Sauce and, most missed of all, Acadia (which was also retooled several times).

The new owner, Paul Kim, is an unknown who worked the line at GTA golf clubs and apprenticed at Buca and Nota Bene. He opened Doma—Korean for “cutting board”—last fall. Cooking modern Korean, Kim is clearly inspired by David Chang’s Momofuku but also by the high priests of French cuisine, and even more by his own childhood in Seoul. He releases a new menu each month. You can order à la carte or try everything for $65 a person, which is an unbelievable bargain.

During my last visit, dinner started with a steamed bun, sticky and squid-ink black, stuffed with caramelized onions and mushrooms. Eight courses followed, each prettier than the last. My favourite was the strip loin, which he marinates in soybean paste, wraps in pickled perilla leaves and sides with cubes of scalloped potatoes and creamed kale. Tied for a close second are his duck two ways (a seared breast and duck confit dumplings), and a salad of octopus tentacle he cooks sous vide and glazes with honey, delicate cucumber granita, microgreens, springy and translucent noodles of konjac jelly, and matchstick pear—an update of Susur Lee’s famous Singapore slaw.

One dessert, his take on a lemon meringue pie, combines mugwort ice cream, artfully torn chunks of eggy sponge cake and a wodge of yuzu meringue. Get a table now, so you can say you were there when he made his debut.