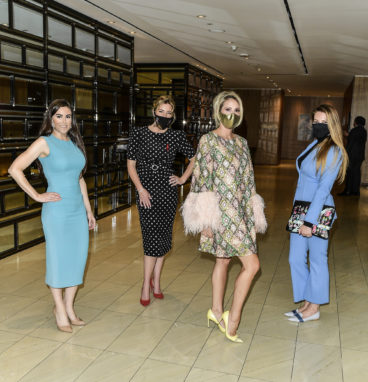 Back on the Scene

As told to Isabel Slone | Photography by George Pimentel | September 23, 2020

On September 9, CANFAR hosted the city’s first in-person charity gala in months. Can You Do Lunch? is an annual fundraiser that normally hosts 400 guests in the Four Seasons ballroom, but this year’s event was obviously scaled back, with just under 130 guests split into three rooms and another 150 people tuning in from home. We spoke with the organizers, attendees and honourees of the event to break down how you host a gala in a pandemic, what it felt like to be gussied up again and how the event shook out.

Jeanne Beker, media personality and event chair: When we were planning the event before lockdown, we decided on the theme: celebrating our creative community. I imagined a salute to the legendary Fashion Cares, a glitzy fundraiser that Elton John once attended, which had raised so much for AIDS in its 25 years. I wanted a collection of old Fashion Cares costumes decorating the venue, perhaps with a handful of Toronto’s wonderful drag artists to model them. I was also hoping we could find someone to sponsor a table of young makeup artists, so the younger generation could hear stories about that incredible event. Of course, we weren’t able to do all of those things because of Covid restrictions.

Eva Hartling, president of the Brand is Female and communications consultant for CANFAR: As soon as lockdown was announced it was pretty clear that it was not going to be possible to hold the event in April. At the end of July, Alex expressed interest in holding an in-person event, but it was still a big question mark.

Alex: I was inspired by other charity organizations that had done all these beautiful Zoom events such as Global Citizen’s One World: Together at Home Lady Gaga concert, so I came up with the idea of doing a broadcast. At the time, public health indicated that numbers in Canada were getting much better. Toronto moved into Phase 3 on July 31, allowing indoor gatherings of 50 people or less. I floated to the committee that we should allow guests the choice to either watch the broadcast from home or attend a small gathering at the Four Seasons. A lot of people said, “Let’s plan for the small gathering.”

Eva: The decision to hold this event was not something we took lightly. This is not a time when we should be having events just for the sake of having events. We’re still in the middle of Covid and we’re in the middle of a human rights reckoning with Black Lives Matter. This event was less about what dress somebody wore on the red carpet and more about the message: we have the opportunity to end HIV in Canada by 2025 with the self-testing kits that are about to be approved.

Valerie Pringle, CANFAR spokesperson and event co-chair: I didn’t know how he would pull it off with the pandemic. I’m involved with a lot of organizations, like CAMH and the Stephen Lewis Foundation, and everything had been cancelled or put on hold for a year at least.

Eva: We decided to combine pre-recorded video programming and live performances. Can You Do Lunch? typically has a live panel conversations between members of the CANFAR community, including people living with HIV and a big personality chairing the event—this year our chair was Jeanne Beker. The question was, how can we replicate it and make it interesting for people who are going to be watching from home? 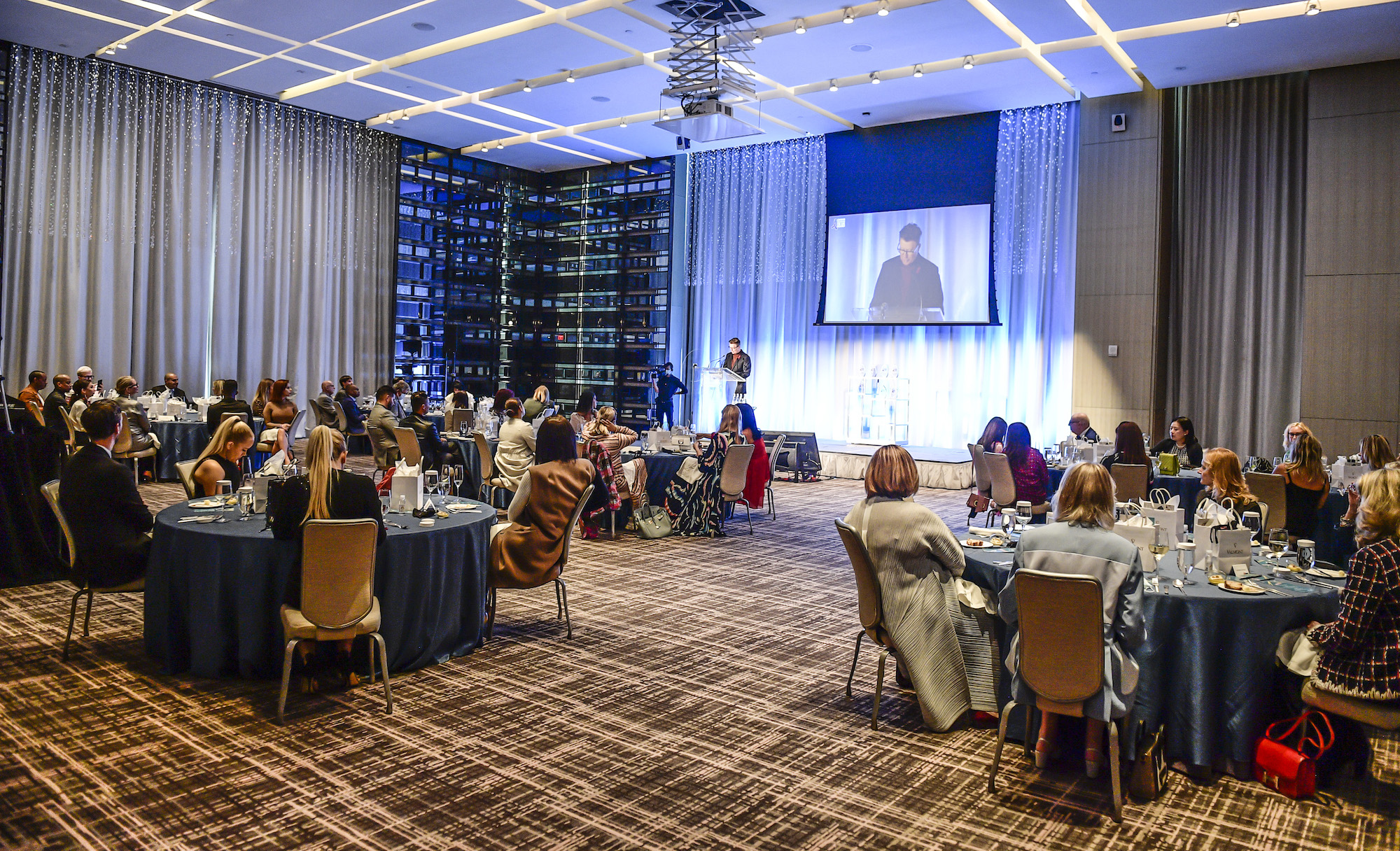 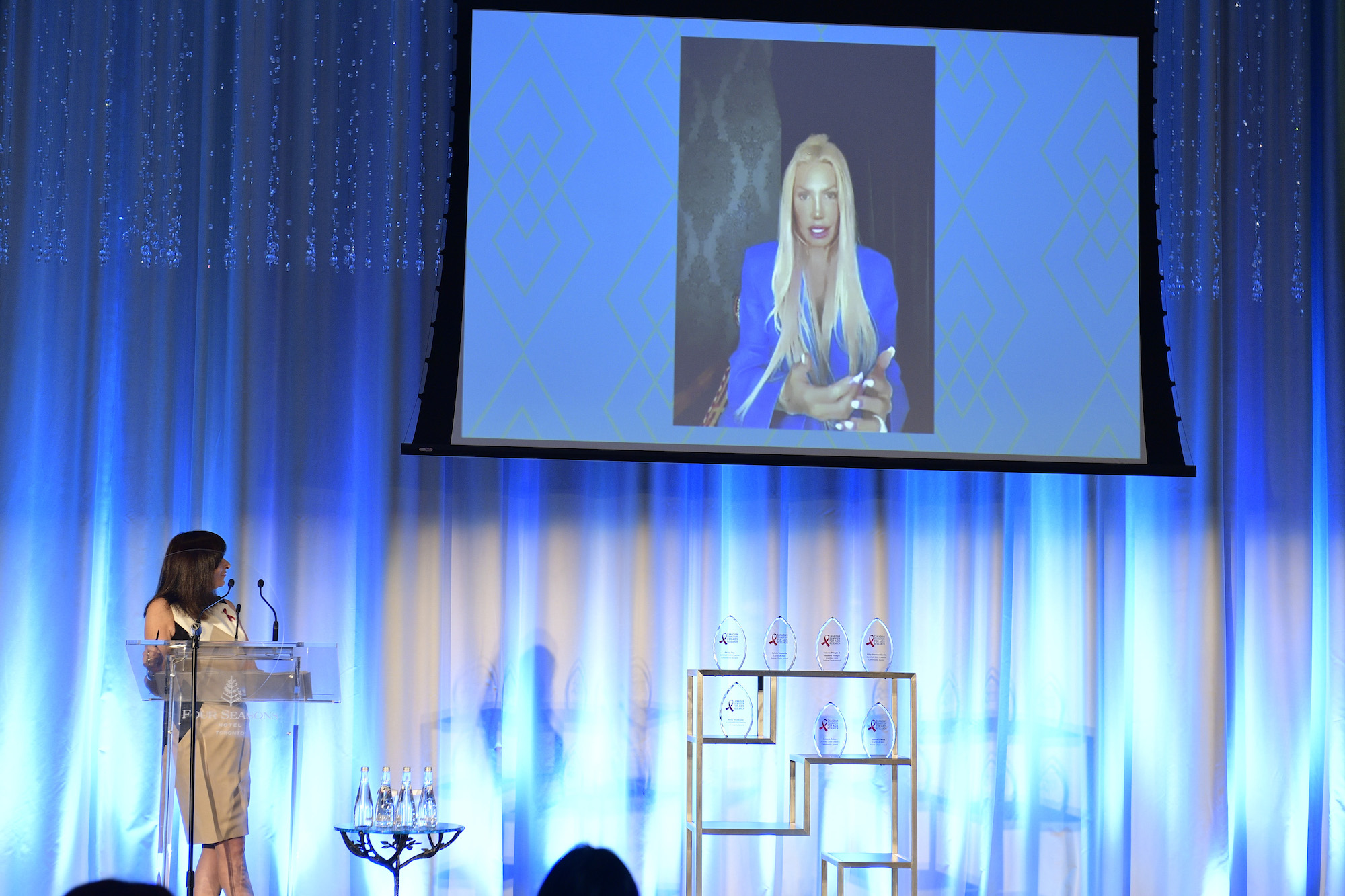 Alex: We sat down with the Four Seasons, which had been working with Johns Hopkins University to establish rigorous safety protocols for their hotel guests, events and food and beverage. Some of these protocols include temperature checks before entering the building, and escorting guests to individual elevators. Once people were seated at their tables, they would have to stay unless they were going to the washroom. We sent a list of the protocols to all 128 guests before the event so they would know what to expect.

Eva: Right up until the week before the event, we were ready to pull the plug if we had to.

Alex: Things have changed in the last two weeks, but at the time the number of cases seemed to be under control in Ontario and I felt optimistic. If the government or public health had sent us back to Phase 2, we were prepared to cancel the event. We didn’t want to create an unsafe space.

Jeanne: I was a little concerned about the optics of the event and how it would come off. These times have certainly punched up the fact that everybody has different comfort levels, and none of us wanted to be perceived as being reckless—but we were assured by the Four Seasons that great attention would be paid to every safety precaution. At times it felt like we were treading on eggshells.

Phillip Ing, creative director and CANFAR gala honouree: I had to be at the Four Seasons the day before to help set up the mini Fashion Cares exhibit, and I was a little shocked to see seating set up in three separate rooms. I’ve been involved in live events for years and love the look of a packed grand hotel ballroom dressed and blessed by florists. I got over that shock quickly enough.

Alex: In 2019 we hosted 395 people in the main ballroom of the Four Seasons, and this year we had two rooms with 45 people each, plus another room of 38. There were 128 people at the event in total and another 150 people dialled in to watch the broadcast from home.

Eva: On the day of the gala, our event planning agency, ESP Inc., arranged catered lunches to be delivered to the homes of everyone watching the live broadcast.

Alex: In order to make sure there was no rush on the red carpet, we asked guests to arrive at staggered times.

Valerie: My husband, Andy, and I were asked to come at 10:45 a.m. for a noon lunch. I hadn’t put on makeup or heels in six months. I couldn’t believe my dress fit! I was so happy to see Hilary Weston and Janice O’Born and other old friends I hadn’t seen for so long. I was astonished at how good it felt to come out.

Eva: People typically go up and greet friends at other tables, but that wasn’t happening as much. Still, people appreciated going out and attending an event again. You could definitely feel the joy of being able to be around people. There were a lot of smiles. We placed a CANFAR-branded mask at each place setting.

Ann Kaplan, Real Housewives of Toronto cast-member and guest: Give me a reason to wear a gown and I get excited. This experience felt like stepping out after half a year of recreating Groundhog Day. I haven’t been out socially in Toronto for six months, and I was apprehensive for obvious reasons. But as soon as I entered the room and saw old friends, my concerns were gone. You could feel the energy in the room. It was incredible. 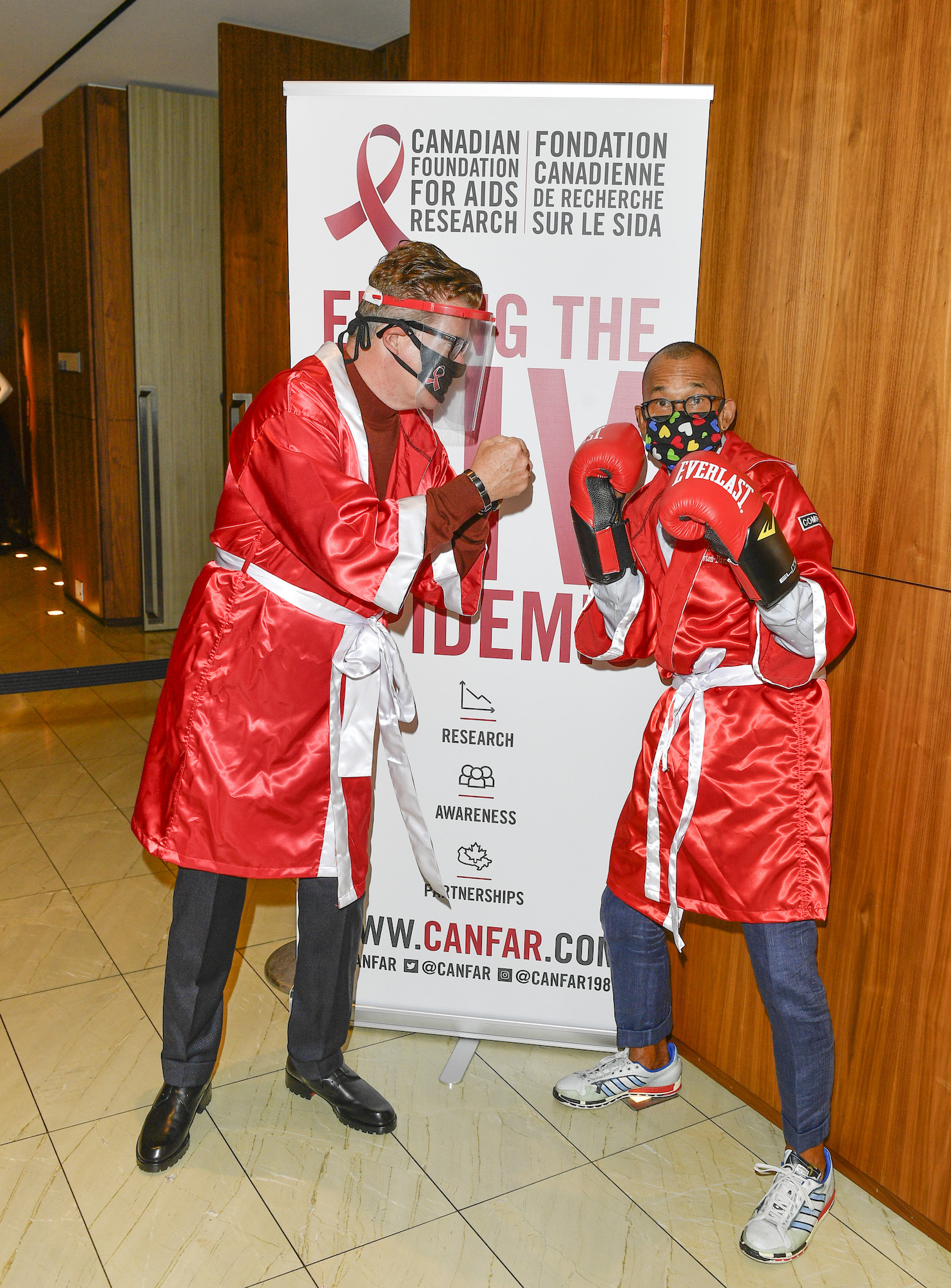 Sam and Cailli Beckerman, bloggers and guests: Our call time was 10.30 a.m., and lots of people arrived in a timely fashion without getting close to each other. We were sitting with our friends who are in our bubble, and it felt very safe. When the event got underway, Alex dressed up in his Rocky robe and jogged up to the podium!

Alex: I put on a boxing robe to amp up the crowd and send the message that we can win the fight against HIV. Late in the evening, I was extremely moved by the pre-recorded fireside chat between Billy Newton-Davis and Jeanne Beker. Billy shared his journey about his HIV diagnosis 25 years ago and losing so many of his close friends to the disease. There were so many beautiful moments. The trickiest part was putting together all of the technical aspects. There was a whole production team with videographers, A/V and cameras on site because the event was broadcast live.

Phillip: As a show tune lover at heart, I loved the live performance. Billy sang “Somewhere” from West Side Story.

Miss Moço, drag queen and guest: I couldn’t help but notice the plexiglass shield on stage during Billy’s performance. I felt a mix of emotions, from the excitement of a taste of pre-Covid times to nerves of participating in any sort of public gathering. The highlight of the event for me was when Jeanne Beker told me my look was classy. 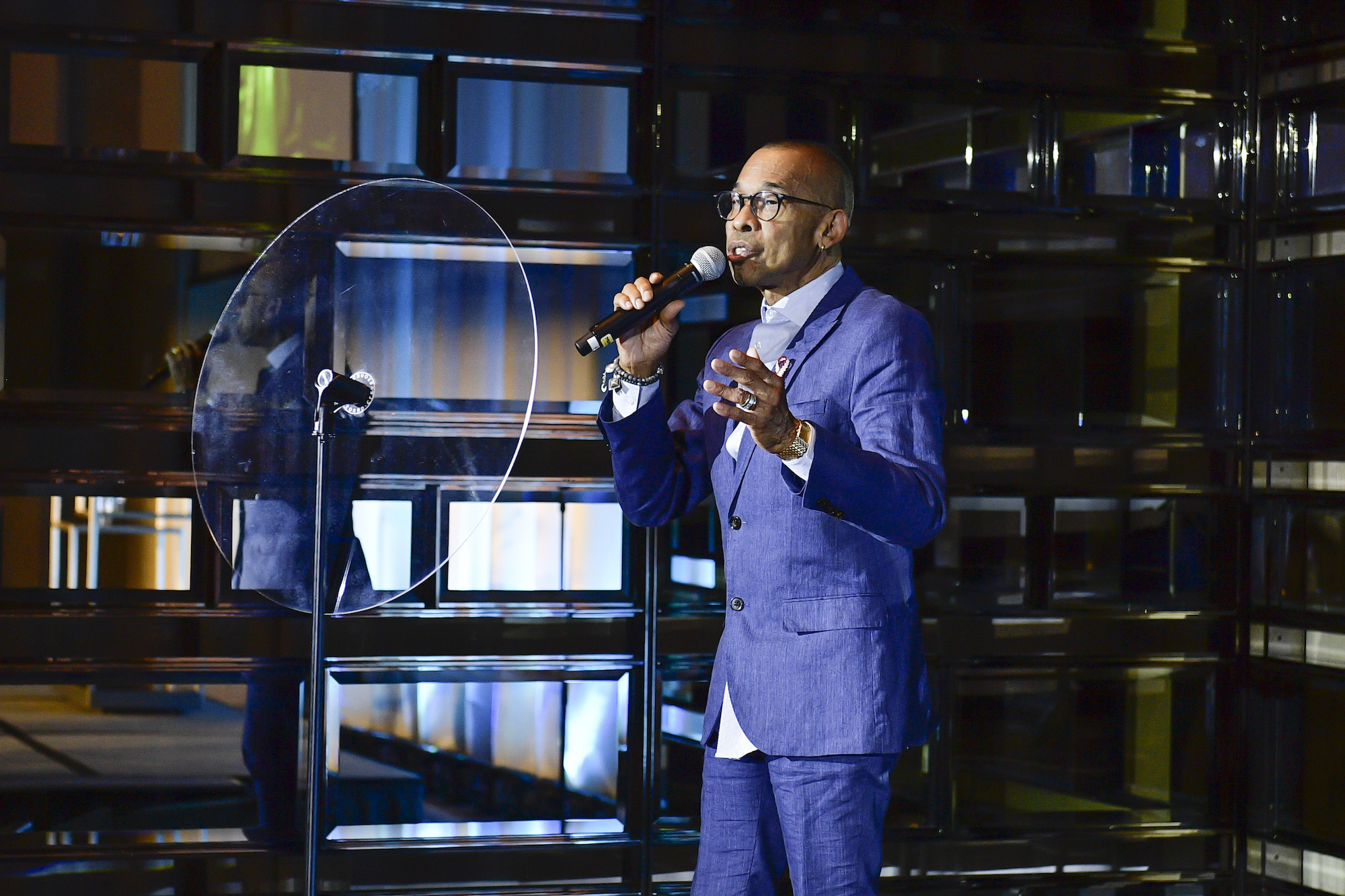 Jeanne: It was strange—to be filled with such emotion for a cause and a community I hold so dear, and yet look out at the room and see so few faces, with everyone sitting far apart. But strangely, wonderfully, I felt an enormous amount of passion from all those who attended.

Eva: Jeanne is an absolute pro. She was phenomenal. It’s not the same emceeing a broadcast of mostly pre-recorded videos as a live event, and Jeanne was able to convey the right dose of emotion and still get the show moving.

Jeanne: I was surprised and a little embarrassed that Alex and the committee decided to present me with a CANFAR Creative Community Award—the same award other honourees Kent Monkman, Phillip Ing and Billy Newton-Davis received that evening. They hadn’t told me in advance, and I wasn’t sure if I should be getting that particular honour at that particular event. Still, it was humbling and it meant a lot to me. 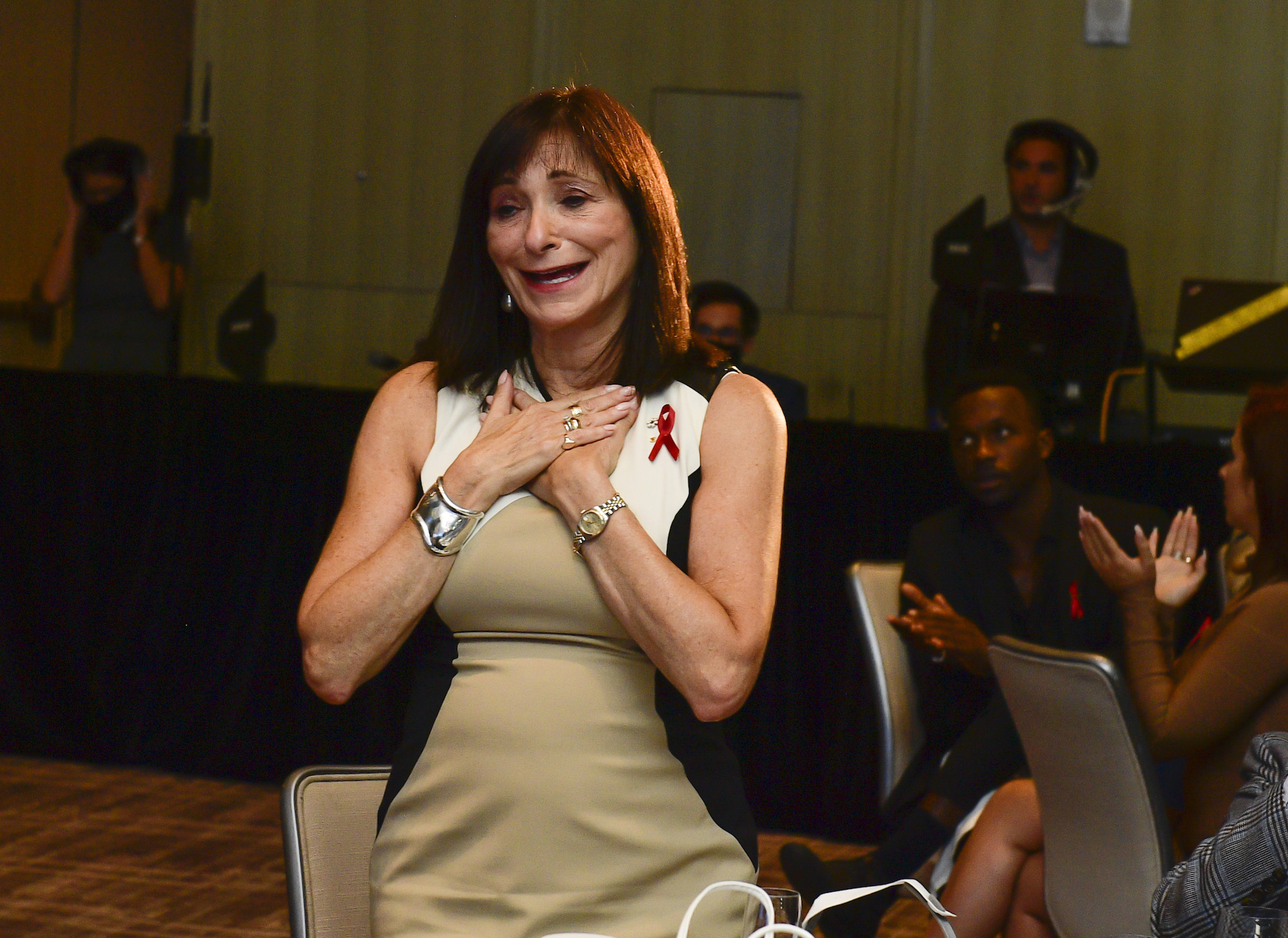 Ann: The event felt the same as last year—aside from not being able to socialize, table hop, stand together on the red carpet. Plus the presence of masks and only five people distanced at each table.

Alex: At the end of the evening Valerie Pringle announced she’d match the donations of the evening, and pledged $25,000. That got a lot of applause. We raised over $200,000, which is a 20 per cent increase in fundraising from last year. We recorded the whole broadcast, which is available on our website so anybody can watch. It was a lot of work, but it was really gratifying because it all came together so beautifully. 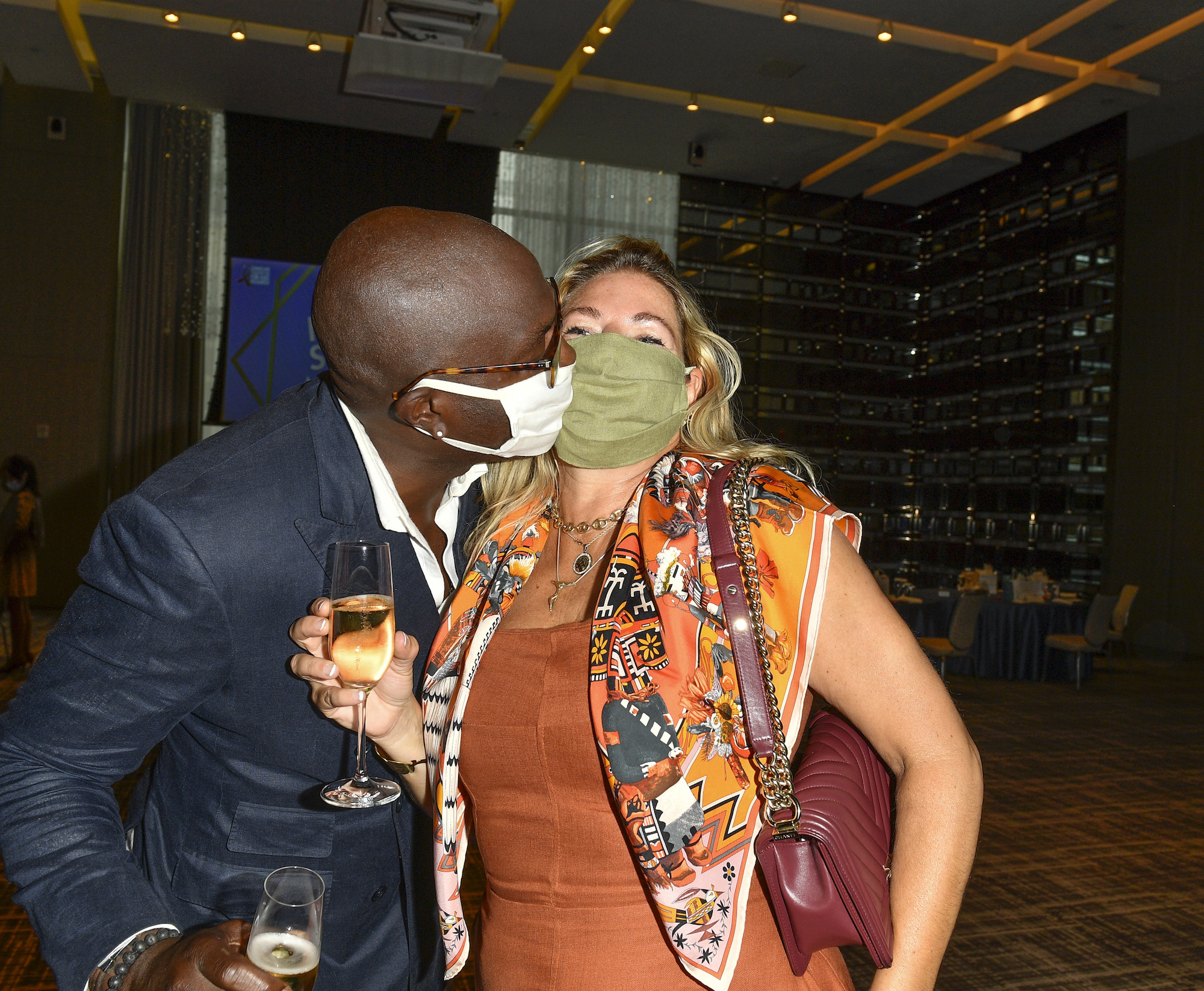 Phillip: I didn’t make the decision to go out during COVID lightly whatsoever. Both my brother, who works at a hospital, and sister, a journalist, caught Covid despite practicing strict social measures. I went to Can You Do Lunch? because I really wanted to support the cause, acknowledging the risks and taking precautionary measures.

Alex: To me, this wasn’t about the event. It was about perseverance. The world is obviously going through such an incredible and terrible time. The most important thing was getting the message out to our community. The fact we were able to have people join us at the Four Seasons was just an extra benefit.