The best new places to eat, drink, shop and relax in Muskoka

The best new places to eat, drink, shop and relax in Muskoka

Spending time at the cottage no longer means depriving yourself of urban comforts. Here, our guide to the stylish new Muskoka

Muskoka-dwellers of a certain age will remember the original Frankie’s Surf Club—a bar, penny arcade and dance hall that served Port Carling residents and vacationers in the 1960s and ’70s. Colin Tooke and Ian McGrenaghan, the owners of Grand Electric Muskoka (the cottage-country outpost of their Queen West restaurant), bought the building in 2014 to expand their kitchen space. But they were taken by the history of the venue and, last summer, resurrected Frankie’s. The new Surf Club is a quirky but chic combination of coffee house, cocktail lounge, clothing retailer and live music venue. This year, Tooke and McGrenaghan are growing their empire further, with a new Muskoka food truck that has cottage catering capabilities. Must-try: The drinks list at Frankie’s focuses on what McGrenaghan calls “casual beach cocktails.” We recommend the Johnny Utah, which gets its name from the Keanu Reeves character in Point Break: it’s a refreshing mix of bourbon, Chambord, lime, mint and ginger: Where to buy chic cottage wear

The Muskoka outpost of Kit and Ace—the minimalist, haute-casual Vancouver chain—carries a truncated collection of the store’s athleisure-inspired apparel, including breezy pastel tanks for dockside drinks and cozy pullovers for evenings around the fire. But what it lacks in breadth (and, really, this is cottage country: the basics will do) it makes up for in rustic charm, including light fixtures and in-store furniture made by area designers and a rotating roster of local artists’ work on display. Bonus: this year, the Port Carling Kit and Ace will host a miniature Drake General Store pop-up, featuring many of the kitschy-cool knick-knacks and housewares Torontonians have come to expect from the Drake’s ever-expanding retail wing.

Where to drink your greens

You know something is afoot when cottage country gets its first 100 per cent raw, cold-pressed sustainable organic juice farm. Toronto expats Brent and Rebecca Ellerson, who co-founded Totem in 2015, call the operation a “juice pub”: their blends are served on-site in chilled glasses, and can be paired with nutrition-dense shots or carried home in brewery-style growlers. Each of their seven juice blends and two nut milks has a cute, Muskoka-themed name: 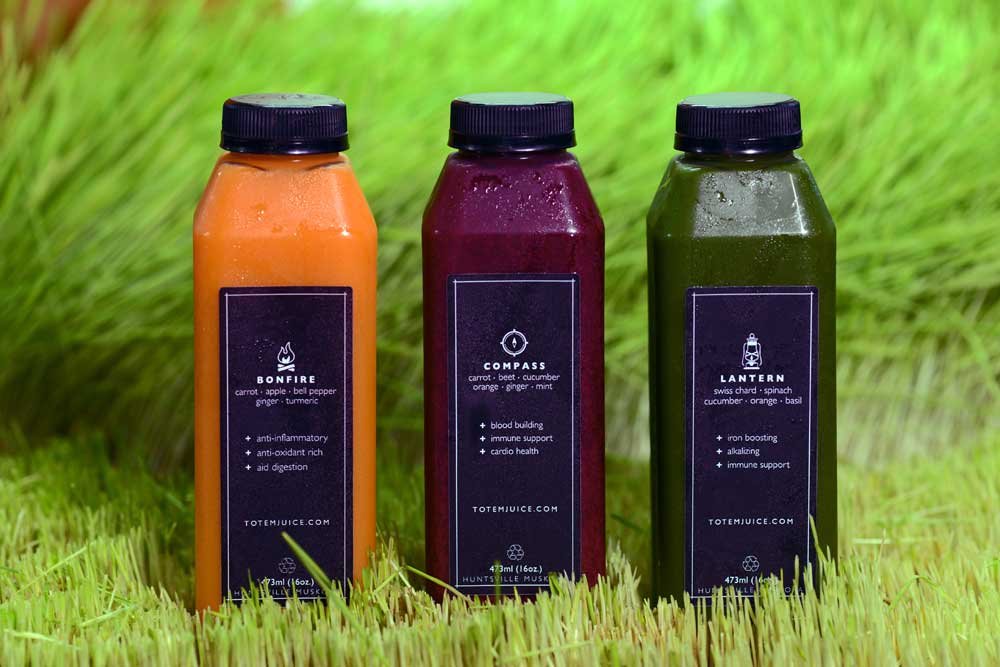 Where to buy the best all-natural soaps, salves and lotions

Tara Miller opened Health Hut in 2011 in an old eight-by-eight-foot ice cream stand she found abandoned on her parents’ Port Carling property. Three years later, she enlisted her husband to build an expansion; it’s now a whopping eight by 12. Here’s what Miller—who opened a Toronto location on Harbord in 2014—crams into her 96 square feet in Muskoka.

Where to gear up for a hip getaway It also sells its own signature espresso blend, roasted at neighbouring Grounded Coffee Co., and a new-for-2016 line of Hive-branded body butters. In 2014, the year she opened the Hive, owner Lauren Patchett asked a friend to screen-print 10 of these sweaters; they sold out the day they hit shelves. Last year, she sold 300 between July and the end of summer. This year, Patchett is increasing production: Where to grab the best local brews

Beer options in cottage country have never been so varied. Here’s our where-to-go-and-what-to-drink-while-you’re-there guide. When to go: Free tours take place Wednesday to Sunday at 12:30, 1:30 and 2:30 p.m.
Seasonal pint: Muskoka’s award-winning Summerweiss is available until Sept. 1. When to go: Tours take place every day from 12 to 5 p.m., by appointment.
Seasonal pint: Sawdust’s cheeky Princess Wears Girlpants, a Belgian-inspired ale, is on tap at Sawdust’s saloon and for sale at its retail store until August. When to go: Saturdays and Sundays between 1 and 3 p.m., or by appointment.
Seasonal pint: Summer Sunset session ale, available “until it’s gone.” Where to get your downward dog on

SUP stands for stand-up paddleboarding. And yoga is, well, yoga. As if both things weren’t difficult enough on their own, the proprietors of Muskoka Yoga Studio have combined the relative lack of stability that comes with standing on a paddleboard to the balance- and flexibility-demanding practice of yoga. It works muscles that you don’t normally use for surfing or yoga, meaning it’s a beneficial workout for newbies or experts—provided you can stay on the board. Instructors can be booked for private classes off your cottage dock.