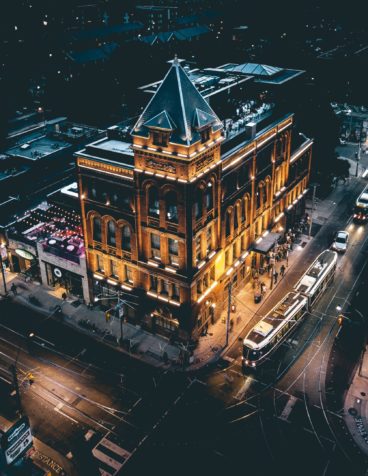 Toronto’s top hotels are artsy, polished, wildly excessive and everything in between. So why let out-of-towners hog the amenities? Plan your next in-town escape with our guide

For decades, Toronto’s Four Seasons hotel—a Brutalist stack at Avenue and Cumberland—wasn’t much to look at. But a 2012 rebuild gave the hometown brand a five-star flagship property worthy of its reputation: a 30-storey glass tower that’s part hotel, part condos. The 259 sun-soaked rooms and suites are decked out with floor-to-ceiling windows, and elegant stone and wood details. Canadian limestone bathrooms feature rainfall showerheads, fast-filling soaker tubs and digital screens embedded in the mirrors. For some extra R&R, weary globetrotters can kick jet lag with gold plumping facials in the 30,000-square-foot spa. Selections from the hotel’s art collection—some 1,700 original Canadian artworks, including pieces by Alissa Coe and Sondra Meszaros—decorate the rooms. And for some extra wattage, Michelin-starred chef Daniel Boulud’s eponymous café is one of the hotel’s major attractions. Rooms from $475 to $15,000. 60 Yorkville Ave., 416-964-0411, fourseasons.com/toronto.

When you spy Pierce Brosnan down one of the Hazelton’s dramatically lit charcoal hallways, it’s easy to mistake this art deco-styled hotel for a James Bond set. Designers Yabu Pushelberg channelled Old Hollywood when decorating the 77-room boutique hotel. Since opening in 2007, the place has attracted a red carpet who’s who, including Oprah, Jon Hamm, Ben Affleck and Blake Lively. Celebs opt for the sprawling suites, with balconies overlooking Yorkville, but even the entry-level rooms are spacious. The green-granite bathrooms, with gigantic soaker tubs, are particularly opulent. After moving from bath to bed, cradle your head with a pick from the extravagant pillow menu—which includes everything from snore-curbing options to body pillows—and try the blackout curtains that roll down at the flick of a bedside switch. Rooms from $425 to $3,000. 118 Yorkville Ave., 416-963-6300, thehazeltonhotel.com.

This Hong Kong export represents a slice of new, moneyed China while still evoking centuries of tradition. The staff wear cheongsam uniforms, and the lobby and hallways are punctuated by silk-panelled walls, Ming-styled vases and calligraphy paintings. Replicas of bikes popular in 1940s Shanghai are free for guests who want to cruise around town when they’re not busy taking a dip in the saltwater pool, which is ringed with lush tropical plants and private cabanas. Suites are outfitted in a pastiche of Asian furniture, including Chinese emperor chairs and Japanese lattice screens. Italian white marble bathrooms offer L’Occitane bath products and heated floors, and room service is ordered by iPad. (But if you want a bowl of David Chang’s famous ramen, you’ll have to pop down to Noodle Bar in the Momofuku complex next to the 66-storey tower.) Rooms from $525 to $10,000. 188 University Ave., 647-788-8888, shangri-la.com/toronto.

The Thompson embodies the King West aesthetic under one infinity pool–topped roof. The swanky lobby, defined by Javier Mariscal’s Toronto skyline mural, doubles as a full-service bar flanked by restaurants Colette Grand Café and the Thompson Diner. The lower level has a boardroom that’s perfect for Nike product launches, plus a 41-seat screening room; by night, it’s home to the nightclub Wildflower. The 105 rooms, kitted out by New York’s Studio Gaia with dark hardwood floors, and flashes of orange and white (and custom sateen linens), seem designed for after-parties. Rooms from $399 to $4,500. 500 Wellington St. W., 416-640-7778, thompsonhotels.com/hotels/toronto/thompson-toronto.

Art appears in unexpected places at the Drake, which gives the hotel an immersive gallery vibe. Matt and Susan Gorbet’s installation of industrial gauges, called “Heartbeat of the Drake,” measures sound across the hotel’s multiple venues. The dials max out on weekends as locals knock back Gin Gin Mules in the Sky Yard bar, and Pabst-pounding hipsters fill the Drake Underground for shows by indie darlings and rock royalty. The rooms are open concept, and romance-geared perks include a rose petal turndown service, and a “pleasure menu” of sex toys, suede floggers and blindfolds. Rooms from $199 to $649. 1150 Queen St. W., 416-531-5042, thedrakehotel.ca.

This luxury brand has become a family favourite thanks to their Ritz Kids program. The hotel’s youngest patrons are invited to browse the lobby candy station, and outdoorsy young ’uns can have an in-room glamping experience, complete with a tent and glow sticks. Meanwhile, grown-up gourmands can tour TOCA’s pungent cheese cave, lined with cloth-bound P.E.I. cheddars and hay-wrapped pecorinos. Rooms are subdued, with pops of opulence (African anigre wood and posh Frette bed linens), and a choice of city or lake views. Rooms from $600 to $8,000. 181 Wellington St. W., 416-585-2500, ritzcarlton.com/en/hotels/canada/toronto.

At its second Toronto outpost, Le Germain somehow makes sports decor classy. Designer Lemay Michaud opted for artful black-and-white portraits of mid-workout Leafs, Raptors and TFC stars above every bed. The 167 rooms are decked out in plush linens, including bamboo-cotton sheets and down duvets. Guest preferences are logged for future stays: returning caffeine fiends, for example, will find extra Nespresso pods. The Quebec-based hotelier is particularly excellent at catering to its youngest guests, with mini-robes and bath toys. Rooms from $289 to $3,000. 75 Bremner Blvd., 416-649-7575, legermainhotels.com/en/torontomls.

Since opening in 1929, the Royal York has catered to over 40 million guests, including the royal family. (The Queen takes up residence in the hotel’s 16th-floor Royal Suite, which includes a formal 12-seat dining room.) Guests without ties to the monarchy are more likely to appreciate the hotel’s newly remodelled rooms—updated with contemporary furniture, rainfall showers and swivel-mounted HD flat screens—and the two-minute stroll to the UP Express from the hotel’s opulent two-storey lobby, with its mosaic floors, Corinthian columns and marble walls. One of the Library Bar’s famous bird bath martinis is a must for any visitor. Rooms from $349 to around $2,500. 100 Front St. E., 416-368-2511, fairmont.com/royal-york-toronto.

When retrofitting this Romanesque revival hotel for the 21st century, architect Eb Zeidler and his daughter, Christina, left the original Victorian floor plan untouched. The majority of the 37 artist-designed rooms are snug, with the smallest a cozy 132 square feet. Details are more of a draw than size: the Canadiana room, for example, mimics an urban Muskoka cabin with leafy curtains and a bookshelf of CanLit. Mini-bars are stocked with Ontario wines curated by celebrity chef Bob Blumer. The Pinterest-board atmosphere is perennially popular with brides, who often book the hotel’s two-storey Tower Suite, with its 360-degree city view and gigantic patio. Rooms from $179 to $595. 1214 Queen St. W., 416-531-4635, gladstonehotel.com.

The King Eddy has doubled down on its regal name. The royal theme includes mammoth chess pieces in the two-storey, skylit lobby, a painting of Queen Alexandra in the Consort Bar, and hallways decked with images of crowns and medals. When updating the hotel and its 301 guest rooms, the designers abandoned the heavy drapery and too-busy prints in favour of soft greys with gossamer curtains and punches of blood red. After sitting empty for 38 years, the 5,000-square-foot Crystal Ballroom reopened in April, and brides have been going gaga for the ornate space decked with Czech chandeliers. Rooms from $299 to $849. 37 King St. E., 416-863-9700, omnihotels.com/hotels/toronto-king-edward.

For decades, this grand 126-year-old building at Queen and Broadview has been hidden under sun- bleached signs for the former Jilly’s strip club. After a two-year gut job that preserved the red sandstone exterior and completely modernized the interior, the ex-flophouse is unrecognizable. The 58 guest rooms are a mash-up of various eras; furnishings inspired by looks from the ’20s through the ’80s have been strung together for an eclectic, hipster-approved aesthetic. Atop the well-stocked mini-bars sits a record player with a handful of albums curated by the nearby Tiny Record Shop. The rooftop is one of Toronto’s best spots for a sunset cocktail. Rooms from $309 to $799. 106 Broadview Ave., 416-362-8439, thebroadviewhotel.ca.

The three-storey penthouse, with a private glass elevator, multiple fireplaces and outdoor Jacuzzi, demands a movie star’s budget: Will Smith, for one, has stayed there while filming in Toronto. The SoHo’s remaining 92 rooms and suites are generously sized, and duvet and pillow menus give guests the chance to pick their optimal accoutrements for the standard kings. Guests can book personal trainers through the hotel’s concierge, and furry friends are cared for just as well as their human companions: rooms come with appropriately sized dog beds on request, and there’s an on-site dog walker. Rooms from $285 to $5,500. 318 Wellington St. W., 416-599-8800, metropolitan.com/soho.

Back in the mid-’90s, the SkyDome had a nickname: Exhibitionist Stadium, after a series of amorous couples were caught, mid-act, against the outfield windows of their SkyDome Hotel rooms. Things are much more wholesome today, and after multiple renovations, it remains the world’s only hotel built into a major league sports complex. Seventy of the 348 rooms overlook the Rogers Centre field, with windows that open to let in the cheers of the crowd. Rooms from $329 to $4,500. 1 Blue Jays Way, 416-341-7100, website.

There aren’t too many other hotels built to look like a 46-storey champagne bottle—the white squares that freckle the exterior of this two-year-old tower are meant to be the bubbles. Even if the interiors are a bit more Ontario sparkling than haute French import, the views are impressive on all four sides. The hotel’s 17,500 square feet of event space includes a 650-person ballroom, and outdoor meetings can be arranged on one of the lush terraces when the weather is nice. When the weather’s not so nice, the heated connection to the Metro Toronto Convention Centre, Union Station and the Path is particularly useful. Rooms from $249 to $2,200. 75 Lower Simcoe St., 416-849-1200, website.

Because of its proximity to the Metro Toronto Convention Centre (it’s attached to the building), the InterContinental is perennially packed with conventioners, from body-builders to Marvel superheroes. Families, too, enjoy booking here. The decagonal saltwater pool is a favourite among ankle-biters. The 584 rooms are contemporary but plain—more Structube than designer-custom—but the central location, friendly staff and top-notch toiletries, like shoe-shine kits and scented Agraria soaps, make it a great value option. Rooms from $249 to $5,500 and up. 225 Front St. W., 416-597-1400, toronto.intercontinental.com.