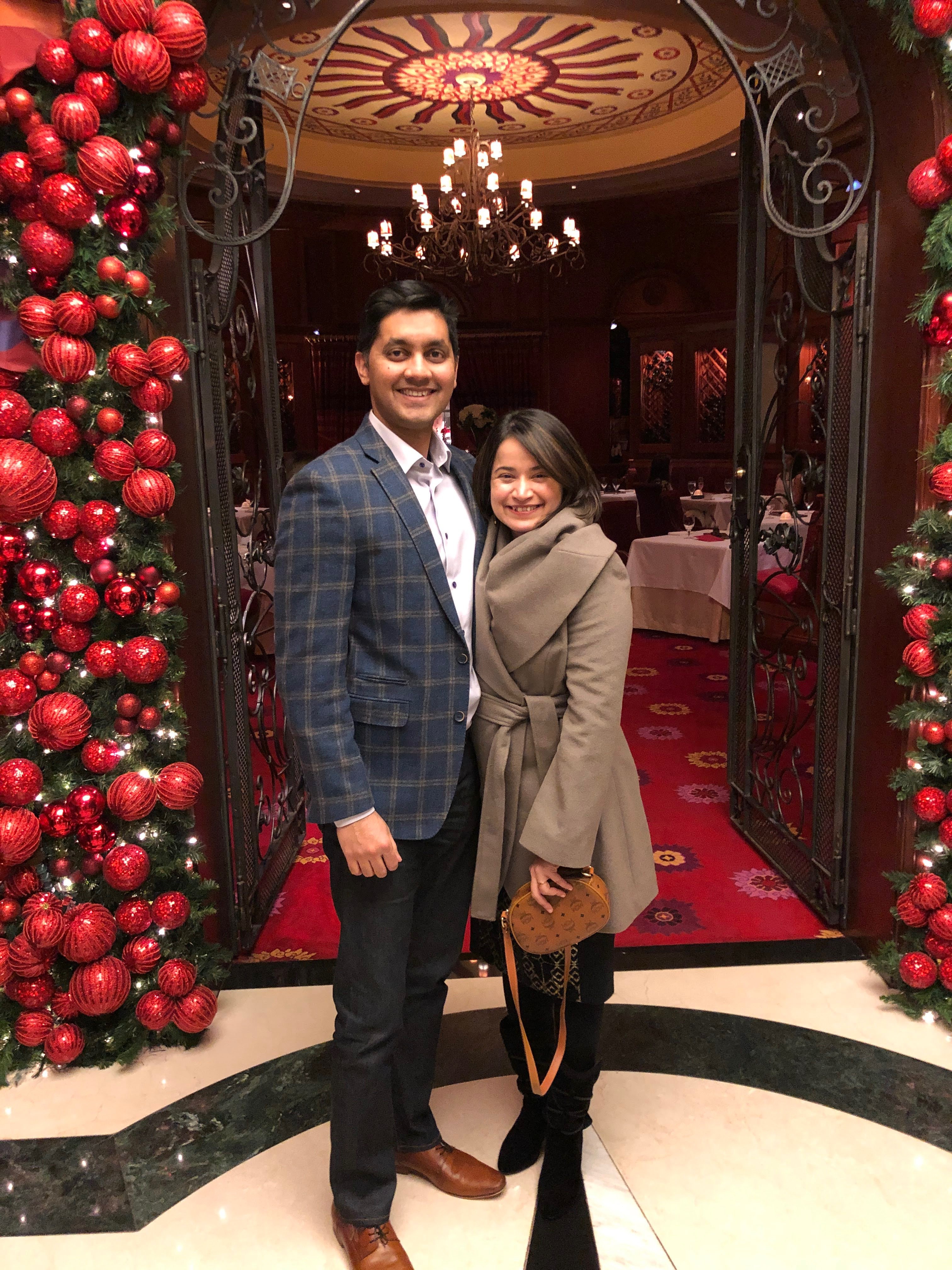 The history: Born and raised in India, Girish and Ketaki first met in the second grade. They didn’t cross paths again until after they both moved to the U.S. for grad school in 2002. Girish pursued a master’s in information science at the University of Pittsburgh, while Ketaki got a PhD in biomedical sciences at Texas A&M.

In 2008, they reconnected online and started dating. They got married later that year. The couple bought a five-bedroom house in Pittsburgh, plus a second home elsewhere in the city, which they rented out.

Although they’d established successful careers in Pittsburgh—Girish in health analytics and Ketaki in the tech innovation field—they always felt uncertain about their future.

Girish and Ketaki were residing in the U.S. with visas. (Girish with a work visa, Ketaki with a dependent visa, which allowed her to work, too). They weren’t optimistic about being able to get a green card, the pathway to becoming a US citizen, because there were countless other people applying. Their hopes for citizenship sank even further when Trump got elected in 2016.

In 2018, as a back-up plan in case their visas were revoked or rejected for renewal, they applied for permanent residency in Canada. They’d never been to Toronto, but it was only a five-hour drive north of Pittsburgh, and it had a thriving tech scene. In May 0f 2019, their applications were approved.

The move: Girish and Ketaki originally aimed to relocate to Canada in two or three years, but they drastically ramped up their plans when the pandemic hit in early 2020. Covid forced interminable delays in the processing of U.S. visa renewals. Due to those delays, Ketaki realized she wouldn’t be able to renew her visa—which was set to expire in June—in time.

Instead of applying for extensions or petitioning for an expedited renewal amidst the turmoil of the first wave, Ketaki resigned from her job and the couple decided to move to Canada as soon as possible. They sold their Pittsburgh home for $355,000 (U.S.) and Ketaki began applying for jobs in Toronto, while Girish made arrangements to work remotely.

They started looking online for a rental in Toronto. The couple wanted a two-bed, two-bath detached with a yard for their dog, Leo. With a monthly budget of $4,000, they found plenty of appealing rentals throughout the city. But their applications kept getting rejected.

Although they had a great credit score in the U.S., they had no credit history in Canada. Plus, Ketaki hadn’t found a job in Toronto yet, and Girish hadn’t finalized his remote work arrangements, leaving them with no proof of employment.

With the closing date of their Pittsburgh home sale fast approaching in mid-July, Girish and Ketaki were desperate. In June, they found a listing for a three-bed, two-bath detached in Corso Italia, available for $3,700 a month.

To avoid yet another rejected application, they offered to pay the first six months of rent in advance. That sealed the deal. In July of 2020, they packed up their belongings and made the five-hour drive to Toronto.

The outcome: Girish and Ketaki spent their first two weeks in Canada quarantining in their rental. At the end of their quarantine, Ketaki accepted a job offer from the Ontario Centre of Innovation. As for Girish, he’d already started working remotely while in quarantine.

Ontario was in between waves that summer, so the couple got an opportunity to explore Toronto for the first time. They loved the incredible diversity of Toronto’s culinary scene. Cano, an Italian restaurant near St. Clair and Dufferin, quickly became their favourite place to go. Girish and Ketaki also enjoyed taking Leo for walks at nearby Cedarvale Park.

Before they could properly settle in, the couple’s landlord informed them that he planned on moving in once their one-year lease expired. Rather than find another rental, the couple opted to buy a house.

In January of 2021, they set a $1.6 million budget for a three-bed, two-bath detached within a 30-minute drive of Ketaki’s office near Front and Spadina. Their checklist also included a yard and a garage.

In February, they viewed a four-bed, four-bath detached in Mimico. Located just south of the Gardiner, the place was less than 15 minutes from Ketaki’s office, and only a five-minute walk from the waterfront.

The recently renovated two-storey home had a beautiful red brick and grey stucco façade. Out back, there was a small deck and yard, as well as a one-car garage.

Inside, the open-concept main level contained a modern kitchen with a large island and a walkout to the back deck. 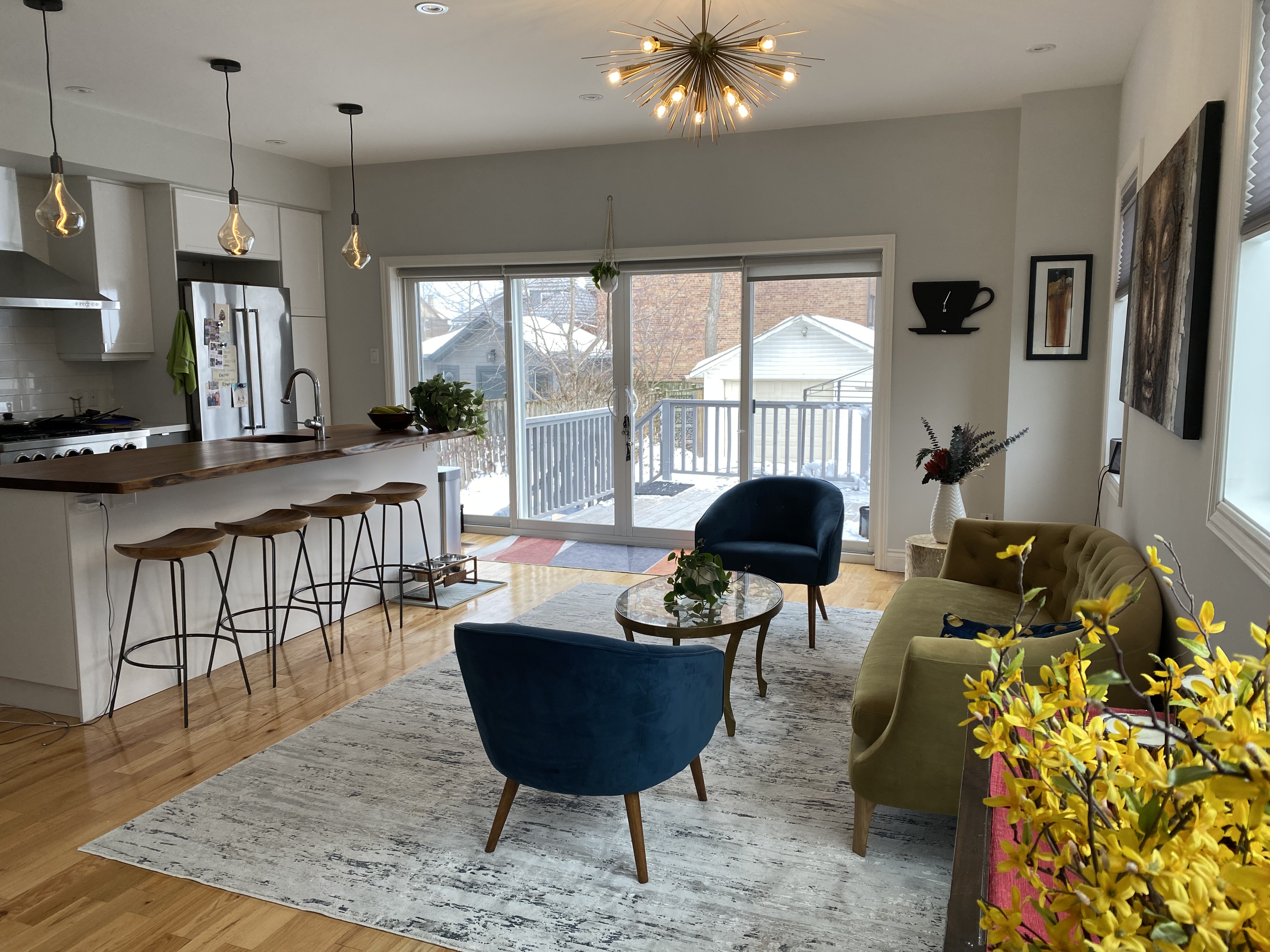 The only red flag was the basement. Although it was finished, it had six-and-a-half-foot ceilings­—a tight squeeze for 6’2” Girish. But they figured they could underpin the basement to add two feet to the ceiling height, which they estimated would cost $100,000.

During the showing, the couple noticed only two agents had left their cards. The offer date was scheduled for the following day—Girish and Ketaki suspected that the appealing listing had somehow slipped under most buyers’ radars.

That same day, the seller accepted. Their hunch was correct—they were the only ones to submit an offer that day. In June of 2021, they moved in.

While they were waiting to take possession, lumber prices skyrocketed because of Covid-related supply chain issues. The cost of underpinning the basement ballooned to $200,000. Wary of the added expenditure, the couple decided to scrap the project.

Since moving in, they’ve befriended many of their neighbours and established new roots. Girish and Ketaki often take walks with Leo in Mimico, which they find to be surprisingly peaceful despite its proximity to downtown. They’ve also gotten used to their low-roofed basement, which has become their TV room.

This past fall, they sold their Pittsburgh rental property for $250,000 (U.S.). Instead of renovating the basement in the future, they plan on using the profits to convert the deck into a sunroom and do some landscaping in the yard this summer.

Girish and Ketaki spent 18 years in the U.S. without stability, relying on work visas with slim chances of ever obtaining citizenship.

After all that uncertainty—and making a big move in the middle of a pandemic—they’ve finally found some stability. Girish and Ketaki now look forward to becoming Canadian citizens, and giving back to the country that took them in. But most importantly, they’re grateful to have a place they can call home.