During the week, Andrea Ciccone and her husband, Ben Leoni, live in a two-bedroom condo in Liberty Village, which they bought for $605,000 in 2014. She’s a regional sales manager at Vivier Pharma and he’s the owner of a product design company. Andrea and Ben are pretty outdoorsy: they enjoy hiking, biking and snowboarding, and for years they’d load their gear onto the car most weekends and hightail it to Tobermory, Old Baldy or Blue Mountain.

Eventually, spending more than five hours in the car for a day’s adventure got exhausting. They started chalet shopping and, in February of 2017, found a three-bedroom 1950s fixer-upper located next to a ski club in Beaver Valley, listed for $289,000. 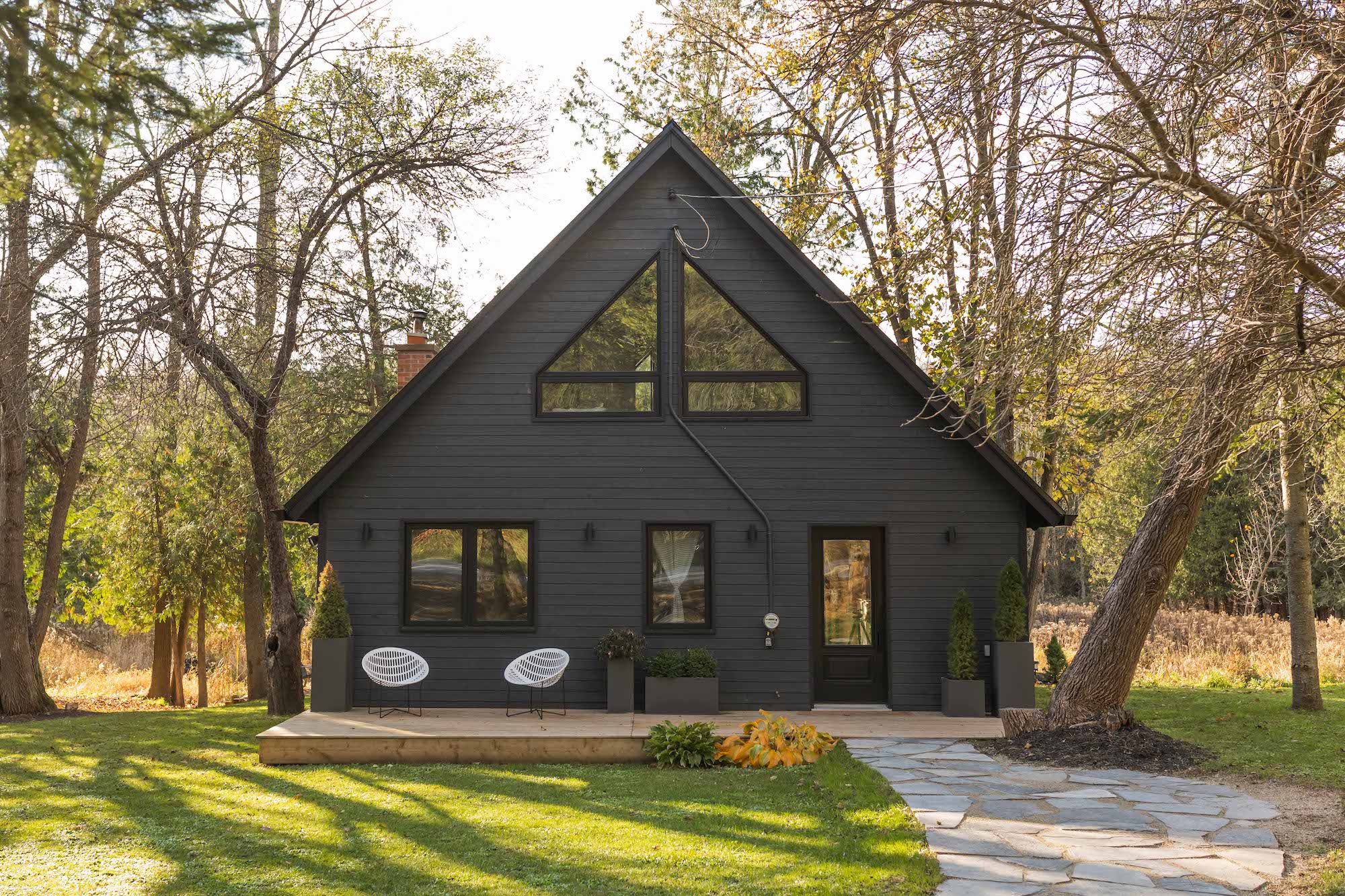 They bought at asking and embarked on a full-scale, four-year gut renovation, chipping away at smaller projects as they saved up, spending about $150,000 in total. In November, they had their first child, but they aren’t done updating the chalet yet. Next on the agenda is a kitchen revamp. “We didn’t want a cookie-cutter house in the country. We wanted a proper chalet,” says Andrea. “We’re happy it wasn’t turnkey.” 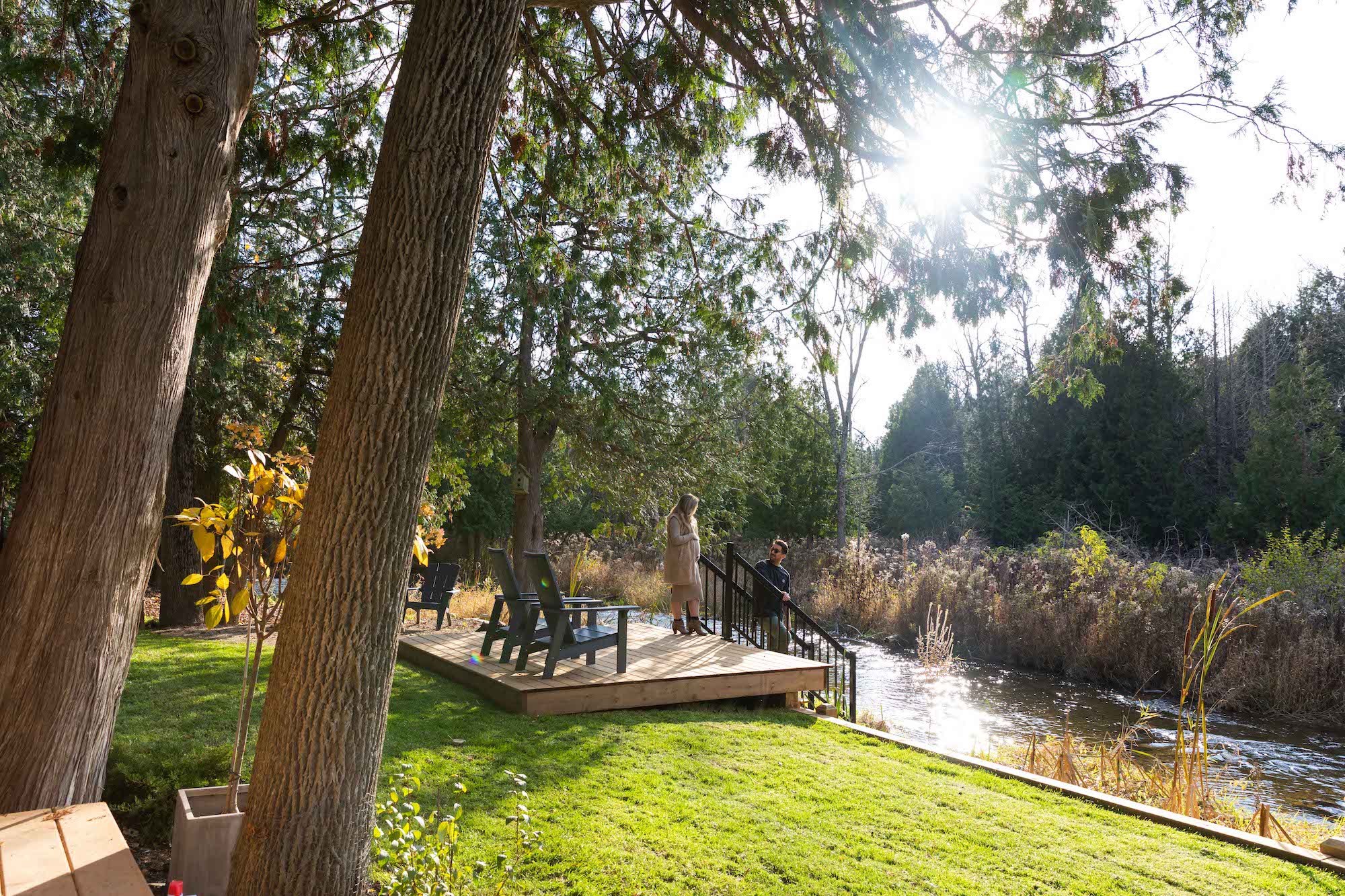 Today, the dreamy getaway is a meeting space for family on weekends. They make good use of the wood-fired pizza oven. Ben’s the pizzaiolo, and he’s perfected his version of Maker’s honey-laced pie with goat cheese, mozzarella, caramelized onions and sesame seeds. It’s just like being in the city. Only better.

The sconces in the living room were salvaged from the original cabin and the prints are from Society6. They reupholstered the Adrian Pearsall chairs, which they bought from a now-closed store on Queen West: 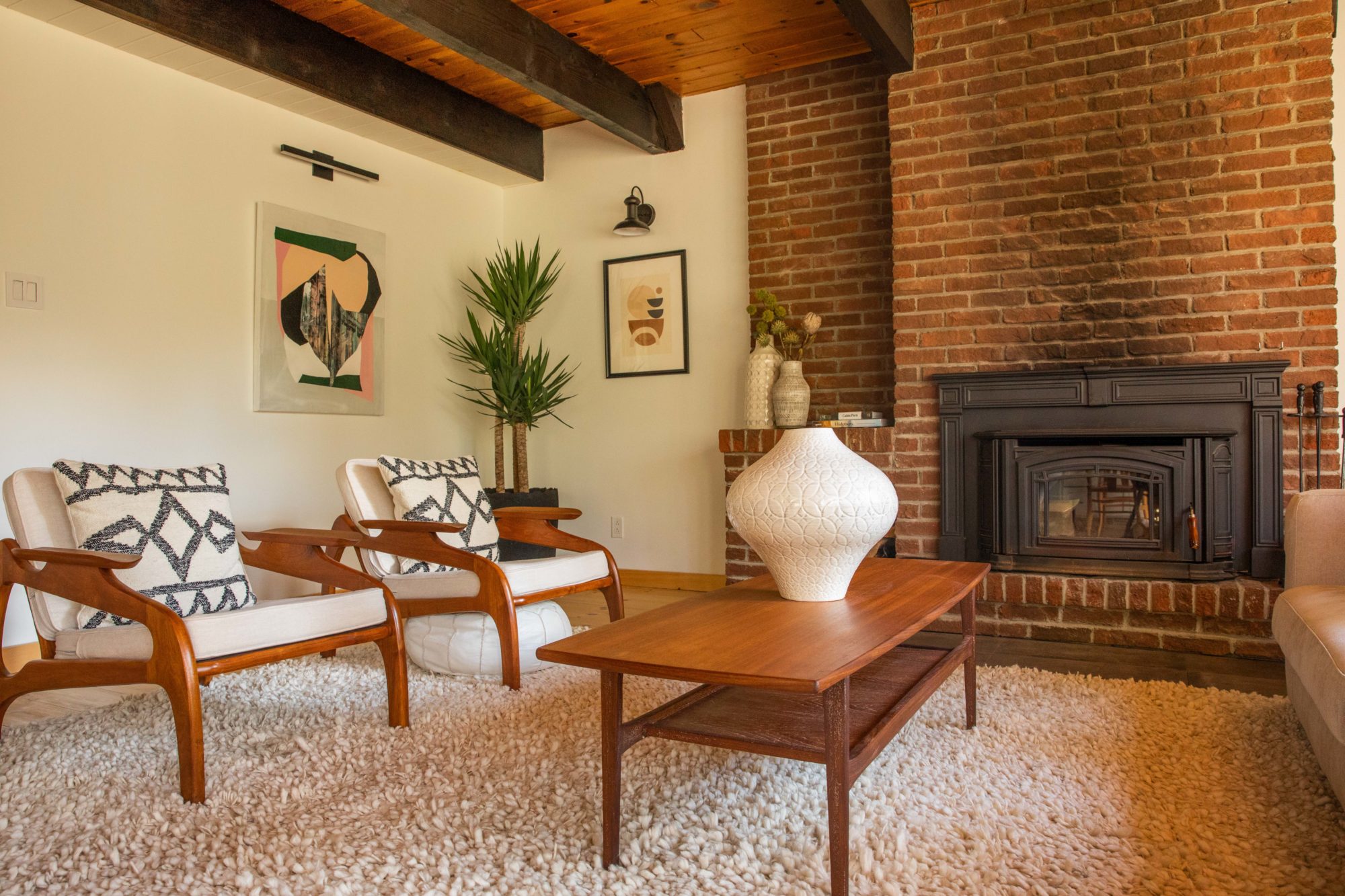 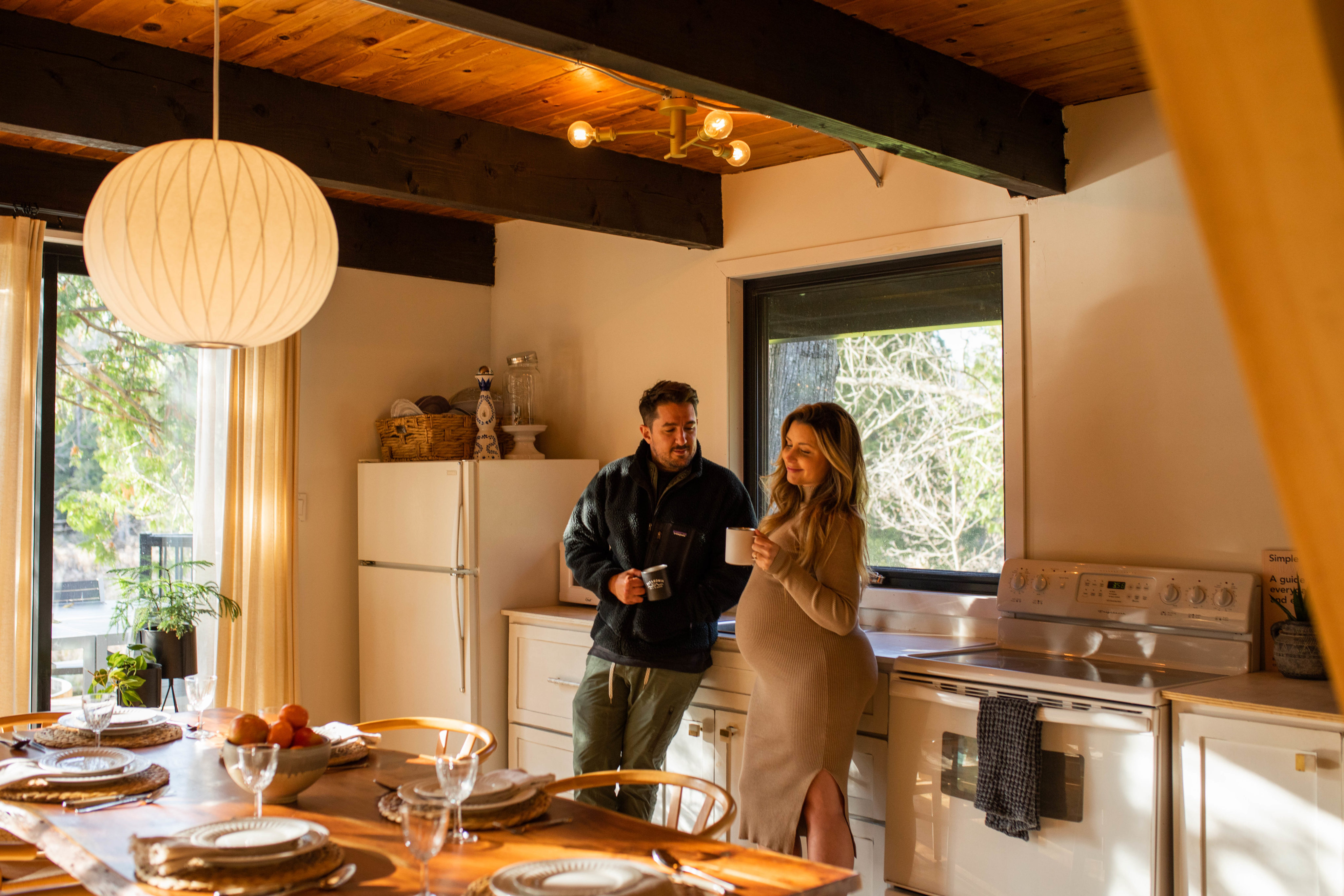 “During the pandemic, we really wanted to create an outdoor oasis,” says Andrea. They redid the deck and added a Clementi wood-fired pizza oven from Nella Cutlery Toronto: 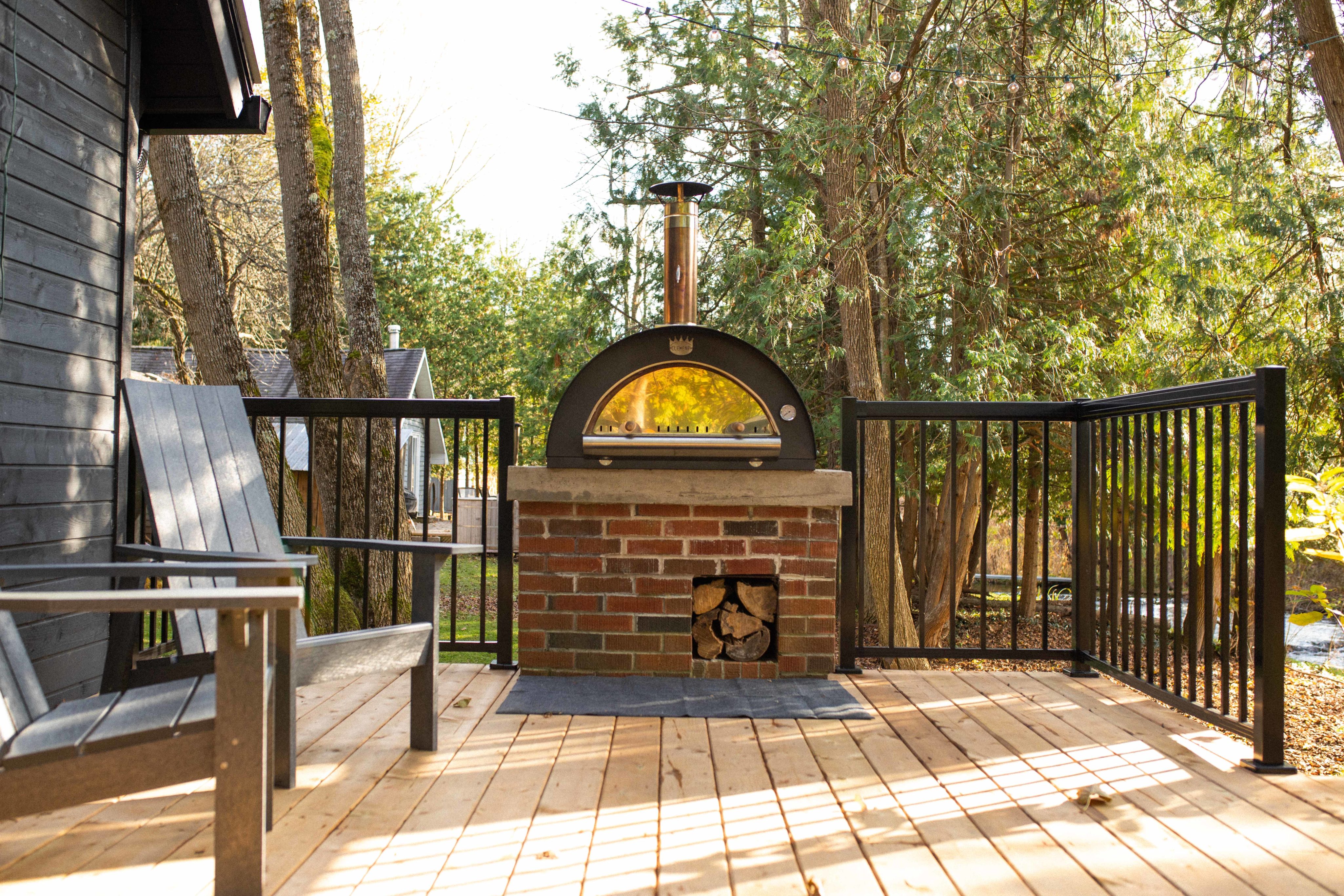 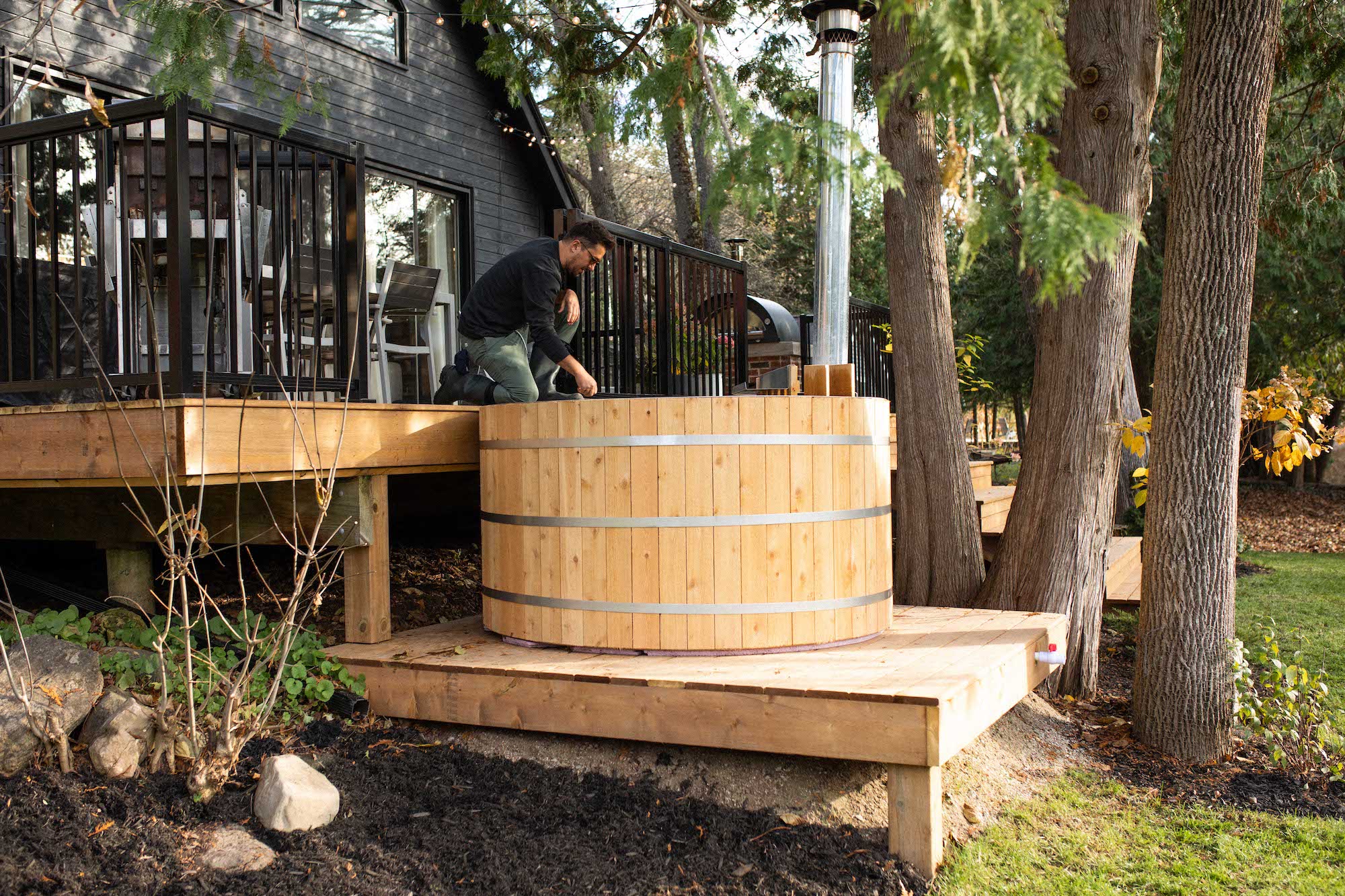 They fixed the rotting foundation, reconfigured the entryway, redid the wiring and swapped out the windows and sliding patio doors: 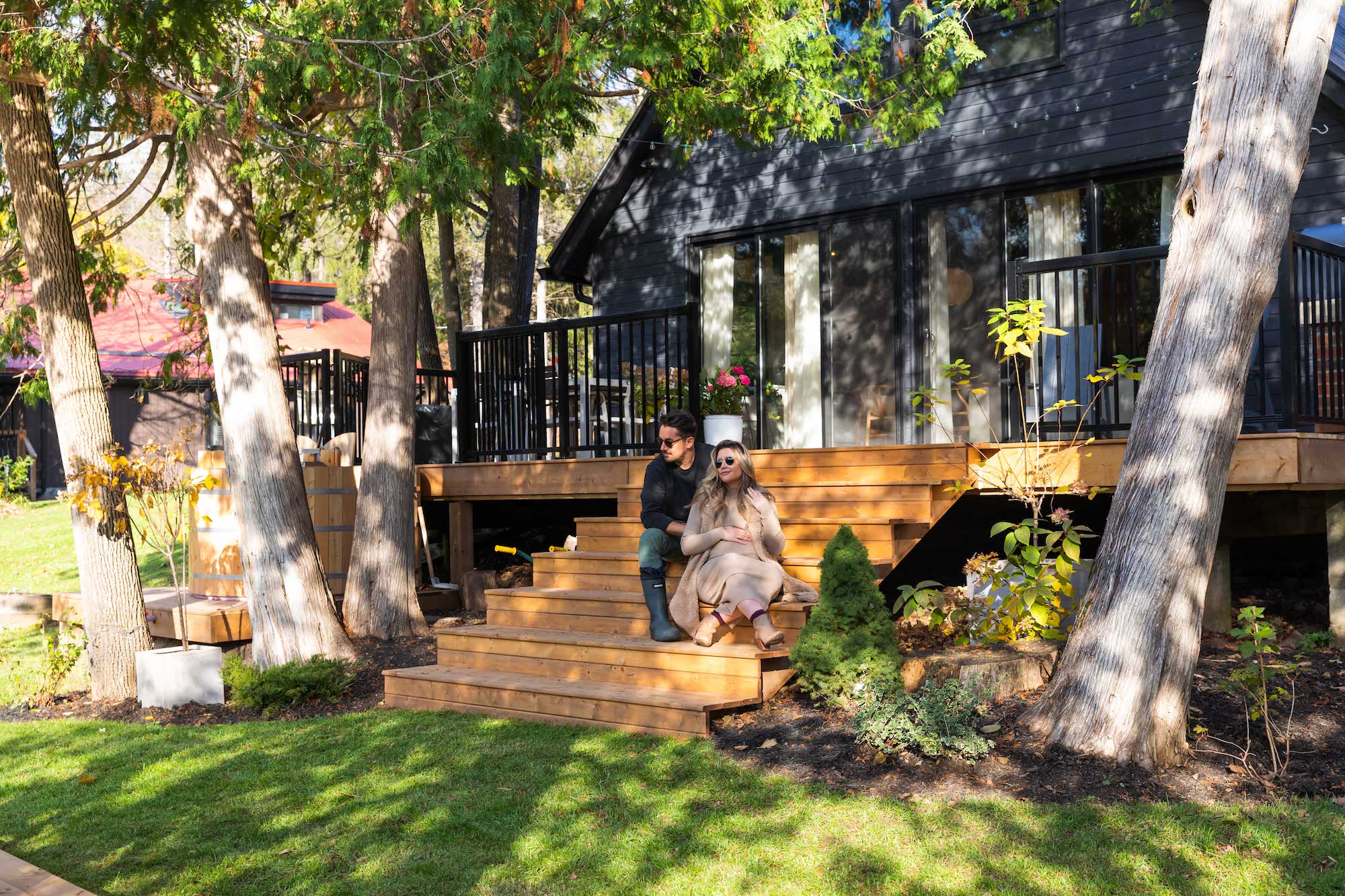 Andrea and Ben chose black siding for the exterior. “Our goal was to modernize the space without losing the authenticity and charm of the 1950s ski cabin,” says Ben. 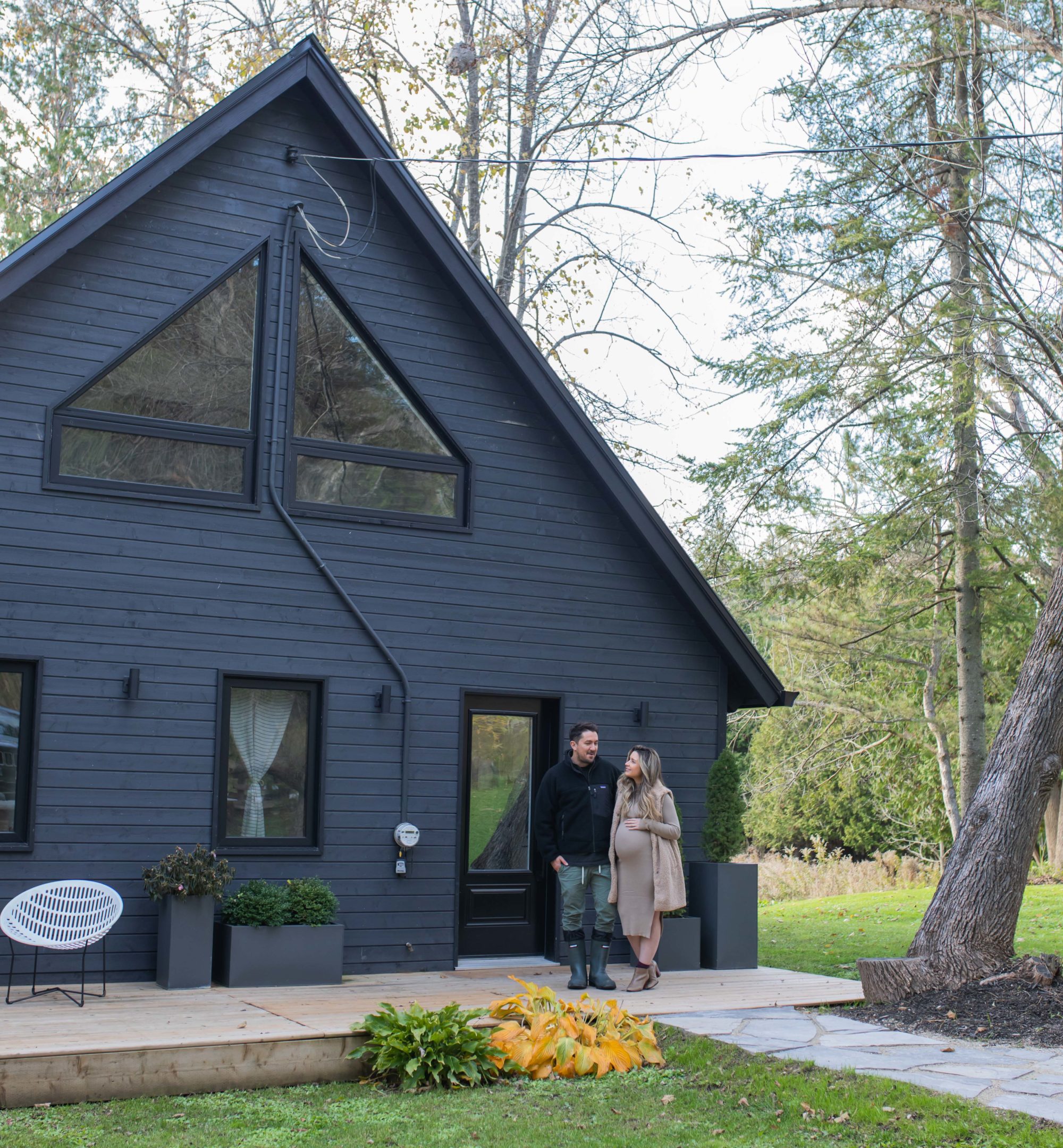 The platform bed is from Wayfair, with linen bedding from Hudson’s Bay and a Scandi-inspired heritage blanket from Pendleton: 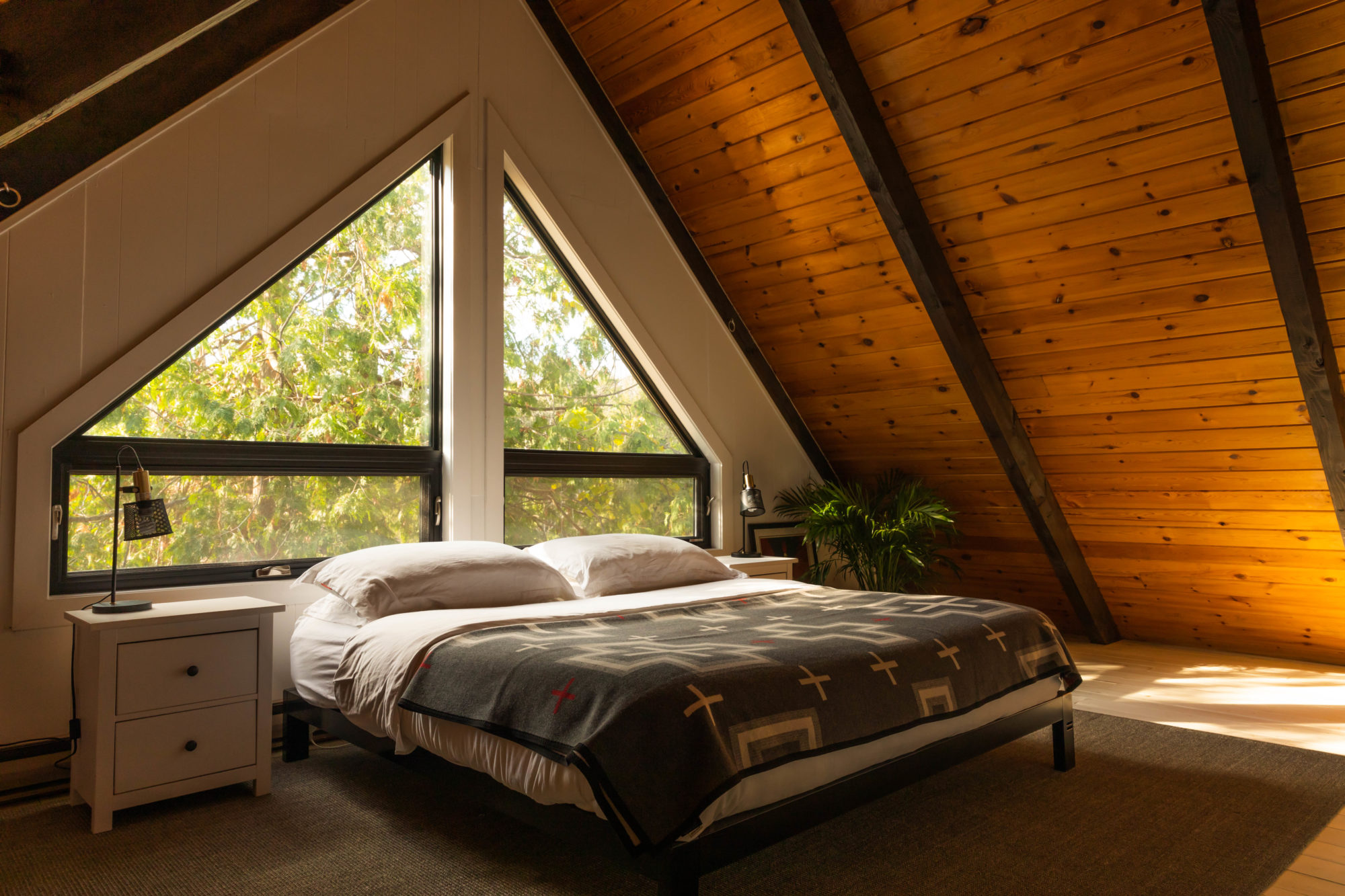 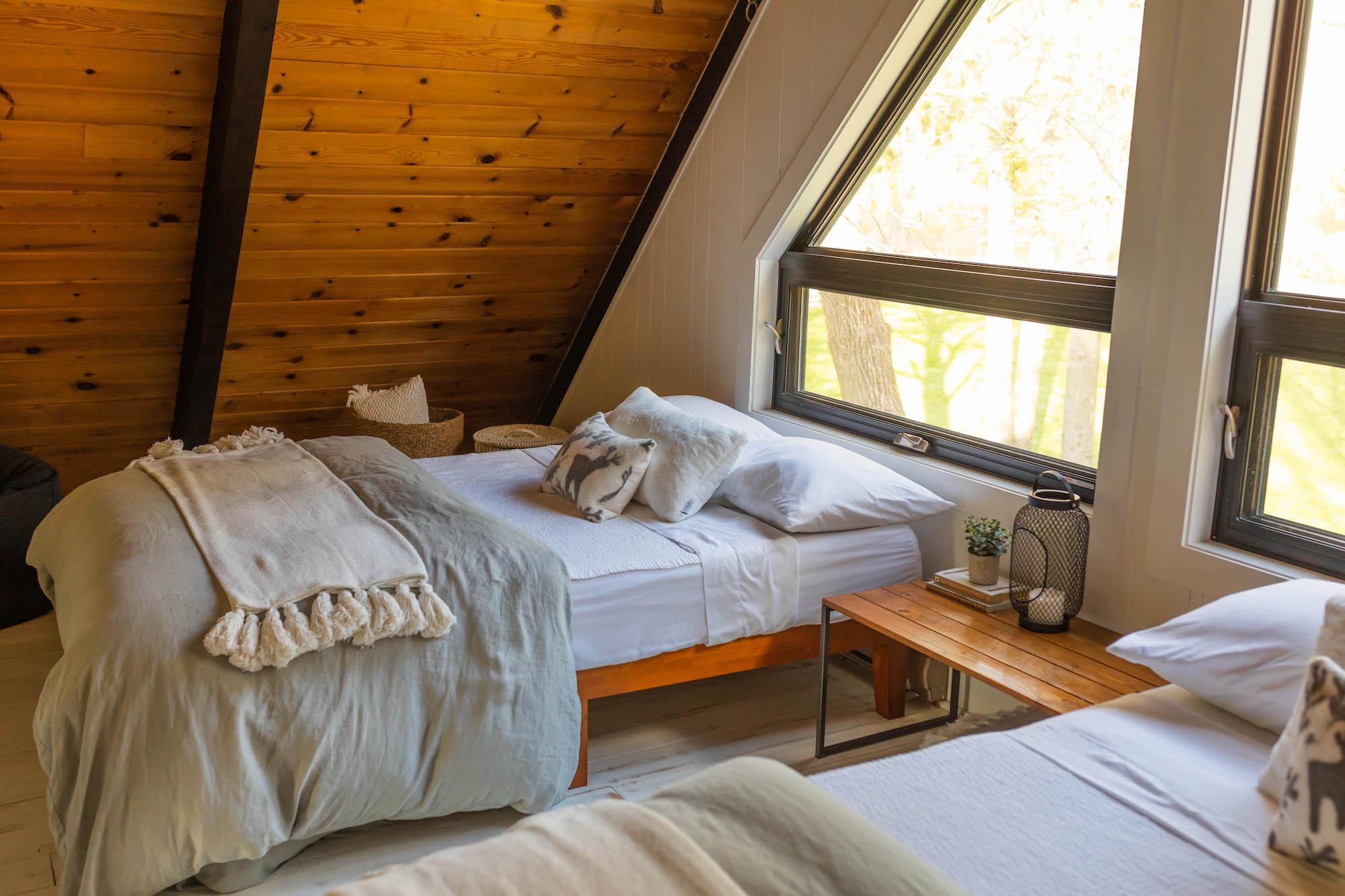 The original bathroom had floral wallpaper, linoleum floors and a yellow bathtub. They added matte black fixtures, subway tiles and a European shower: 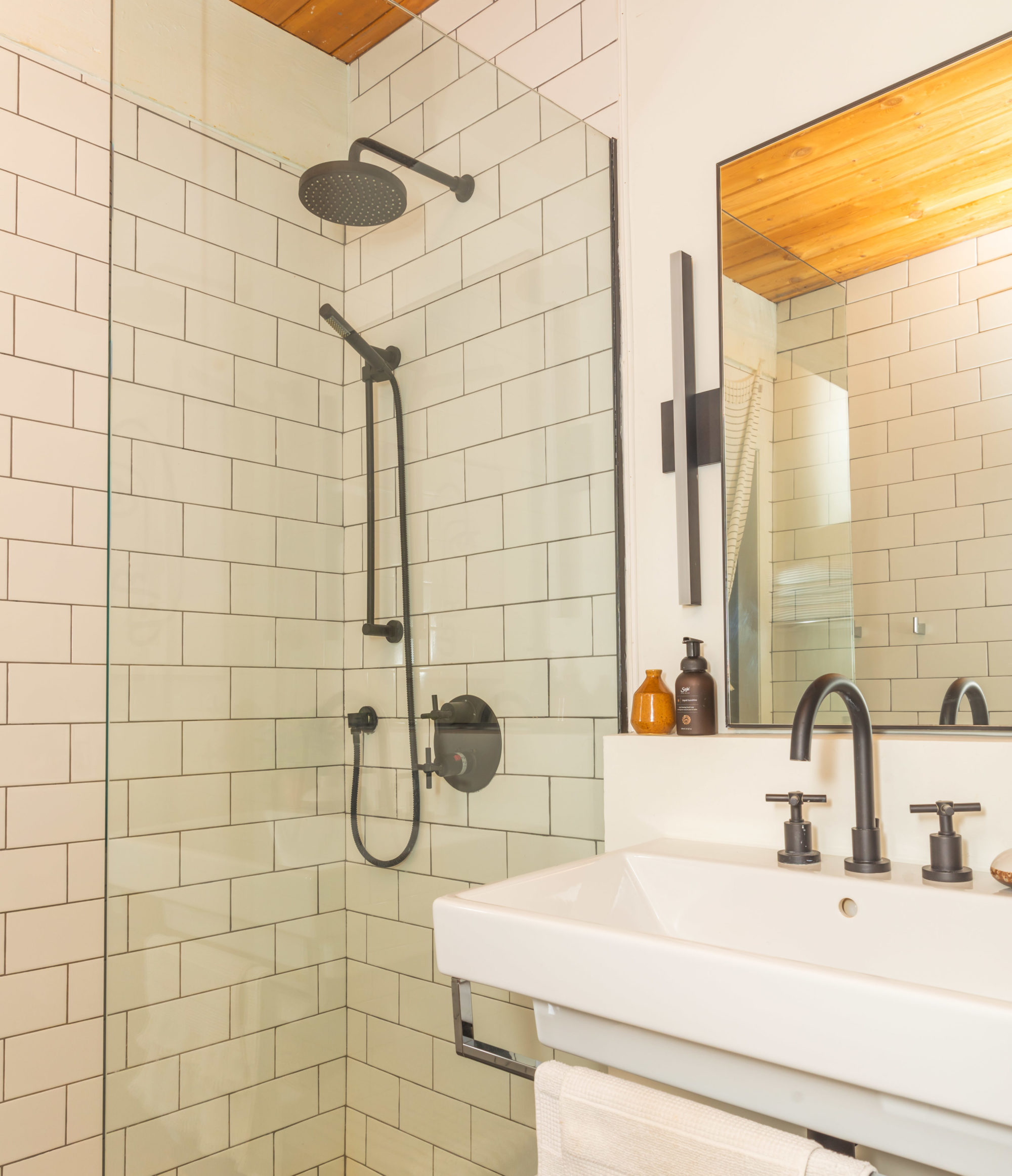 Andrea and Ben kept the original pine ceilings and painted the beams black: 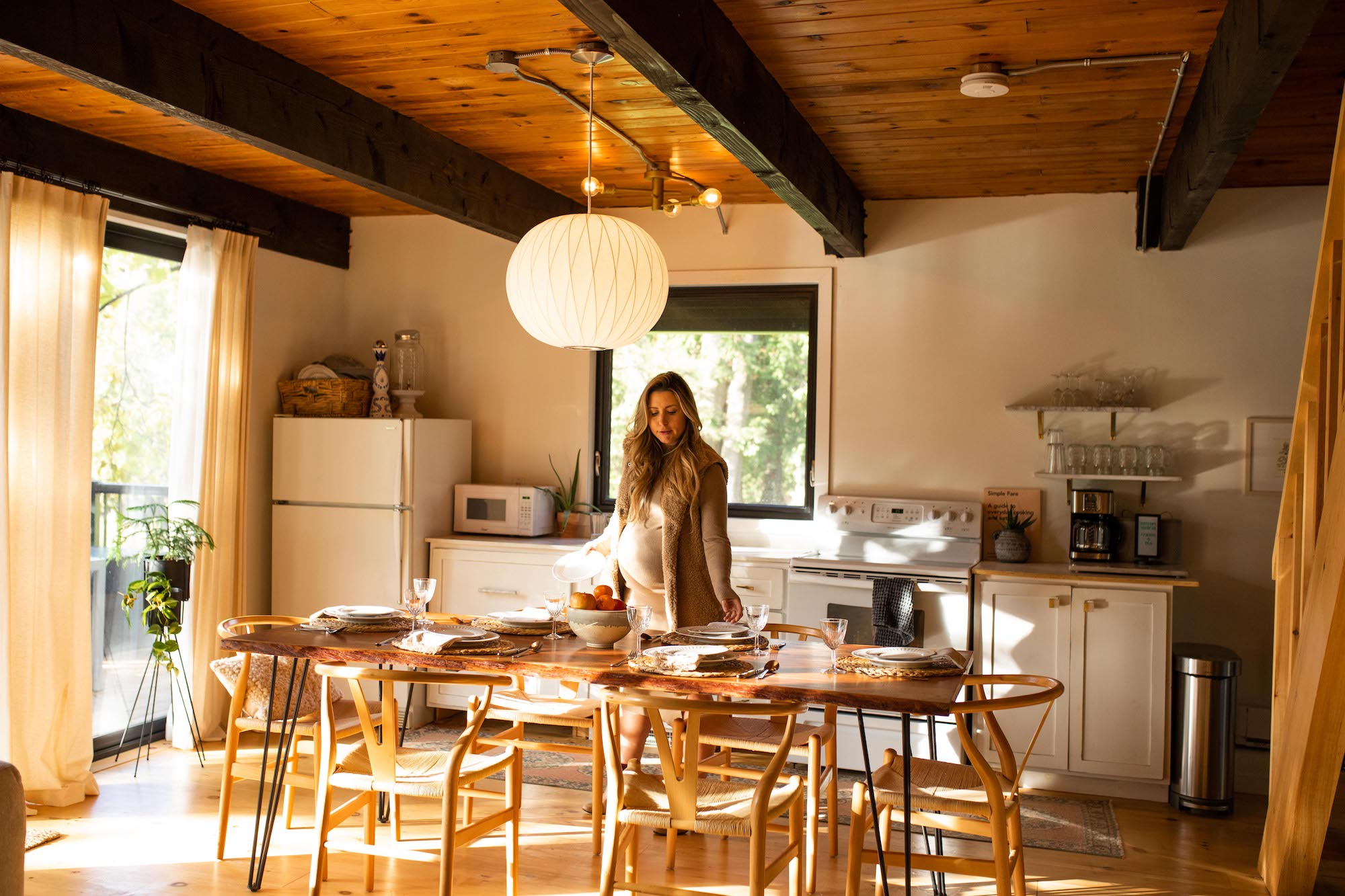