A detached four-bed, seven-bath nestled in a secluded cul-de-sac in Thornhill. The two-storey structure evokes the grandeur of 18th-century French chateaus, with a white stone façade, turrets above the windows and Parisian balcony railings. (The luxury cars parked in the driveway aren’t included in the listing, unfortunately).

Inside, the designer, a big fan of the James Bond franchise, picked black and white decor to match 007’s iconic tuxedoed aesthetic. Out back, there’s a stone patio surrounded by a bounty of plant life, including cedars, oaks and hydrangeas.

In 2016, two brothers bought the vacant plot for $1.5 million, planning to build a nearly 5,000-square-foot house for their parents, who lived in a small bungalow elsewhere in the neighbourhood.

The brothers, who run BOND Build (named after their familial bond, not the British super spy), collaborated with 2B Design & Build on the $2.5 million project.

Playing off the name of the brothers’ company, the designer used classic European refinement, synonymous with James Bond’s character, as a theme for the interior of the house.

Builders broke ground in 2018. The brothers’ parents moved in the next year, shortly after construction was completed. When their parents recently decided to retire to California, the brothers plopped the place on the market.

There are Italian marble floors and Parisian-style archways in the front foyer. It took more than two weeks to paint the archways black, using a specialized European oil paint: 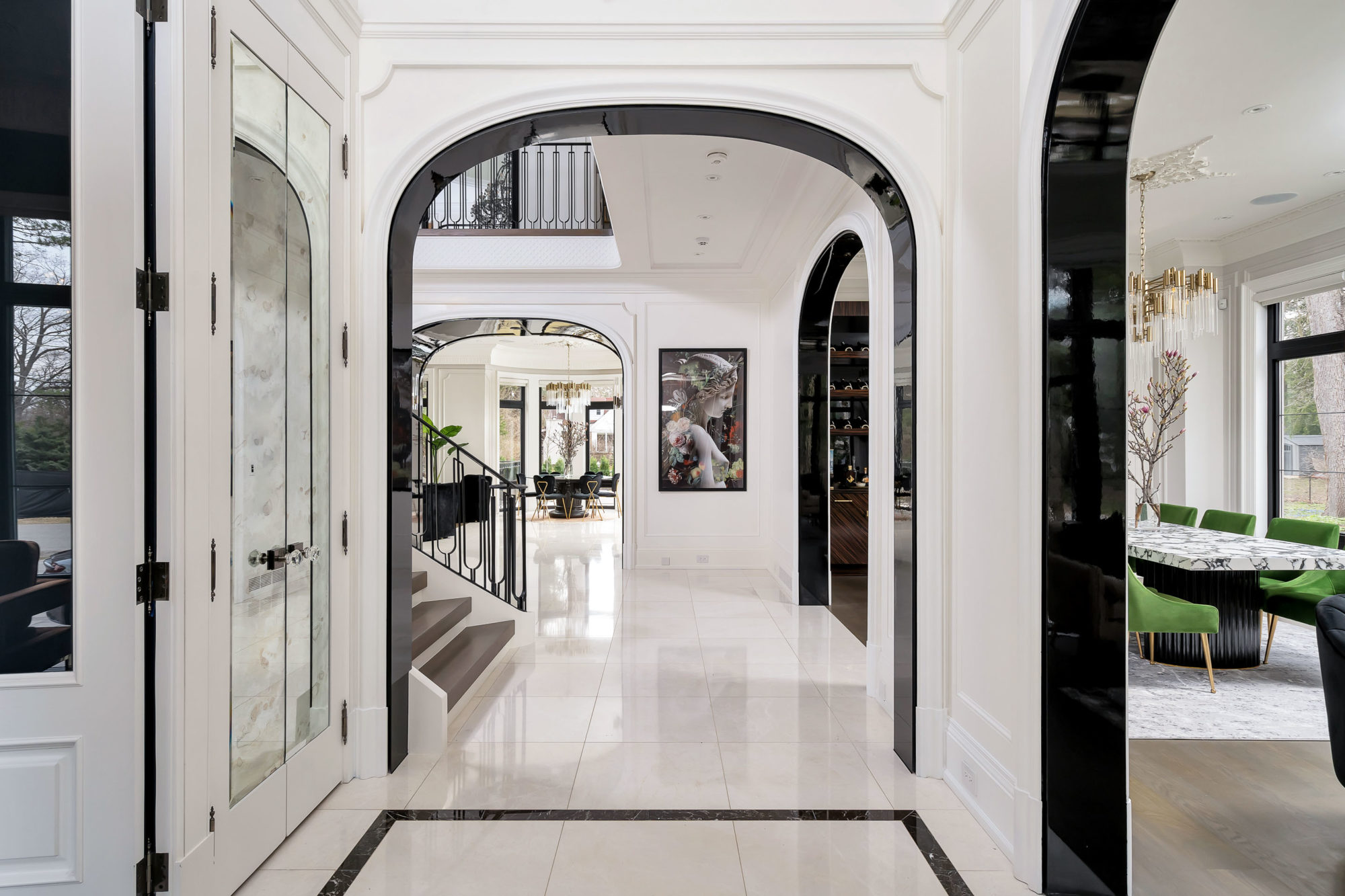 This open-concept reception area has a wood-burning fireplace and engineered oak floors: 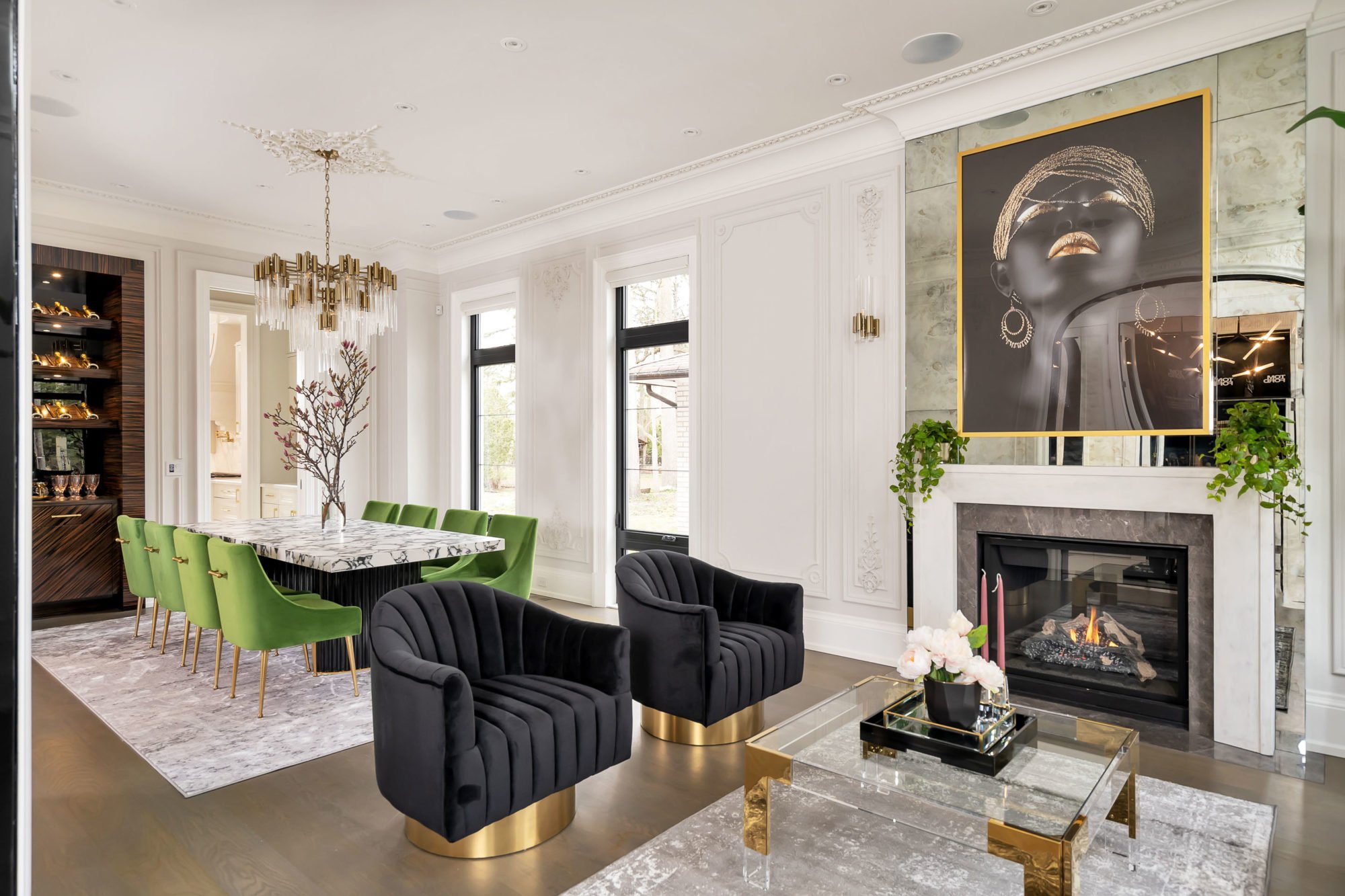 The dining area includes a Bethel chandelier and a marble-print porcelain dining table: 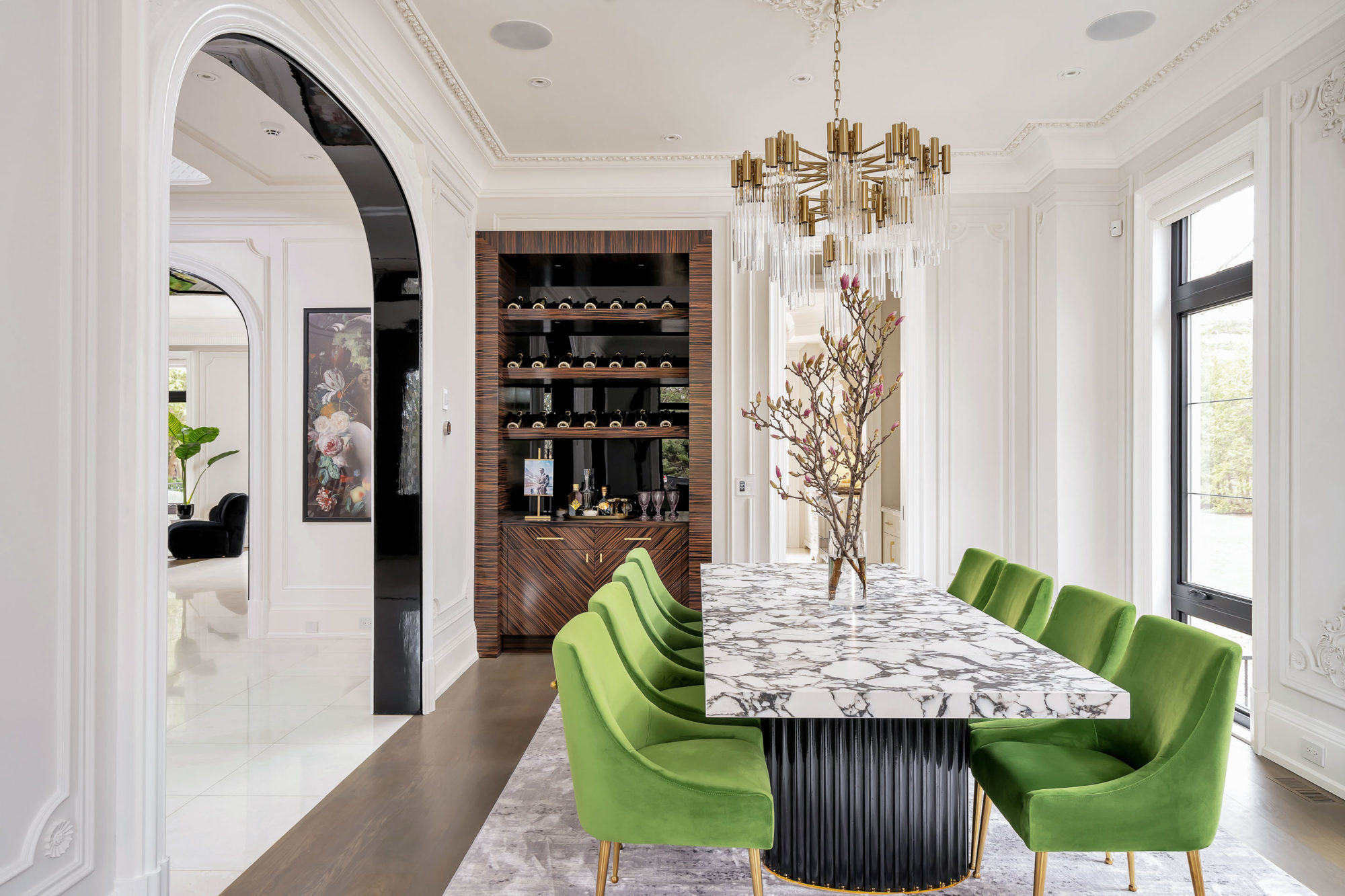 In the kitchen, the backsplash and countertops are made from quartz. It’s also got a view of the backyard: 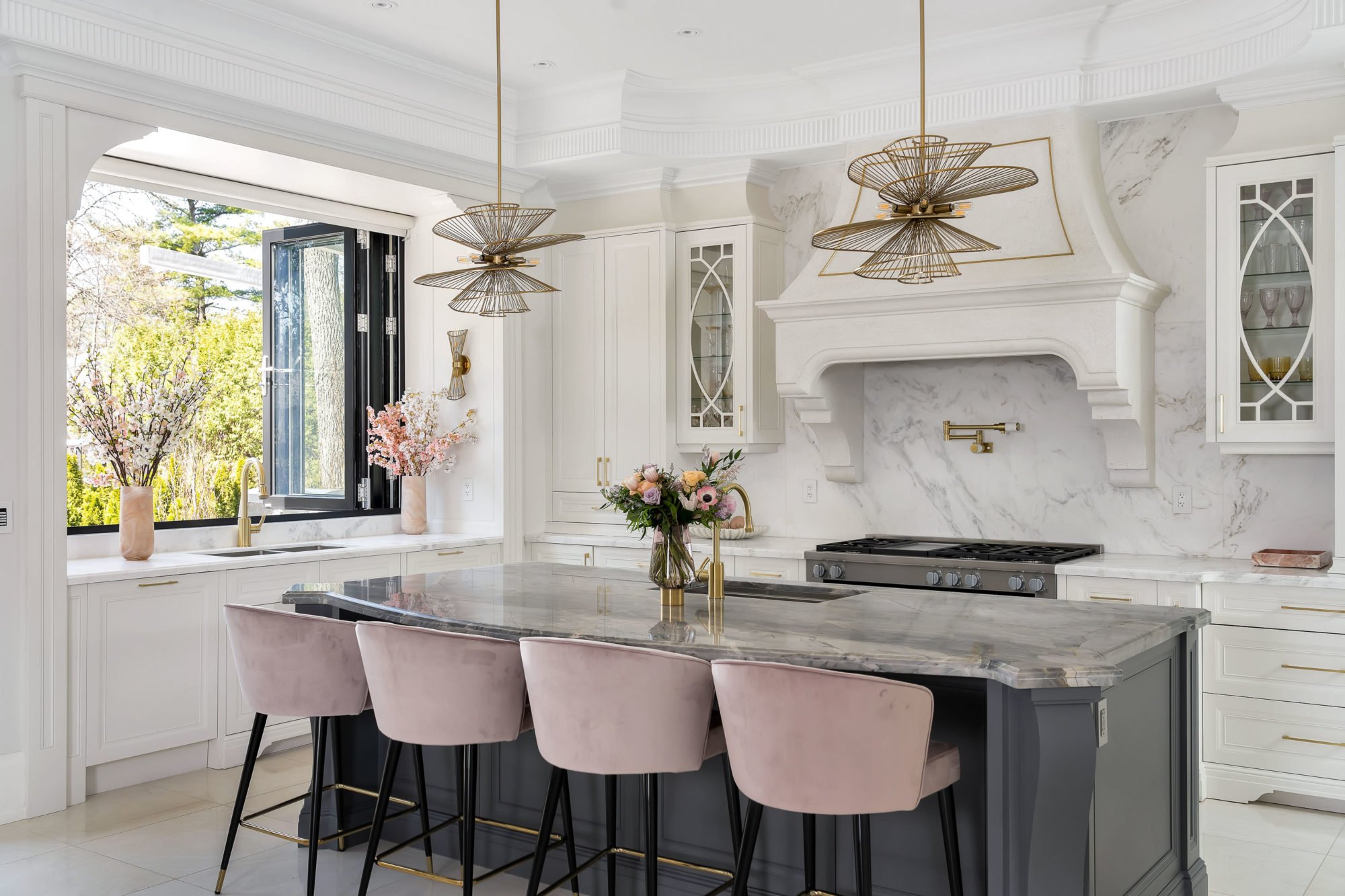 Adjacent to the kitchen, the living room has a built-in television, custom glass displays and a wood-burning fireplace: 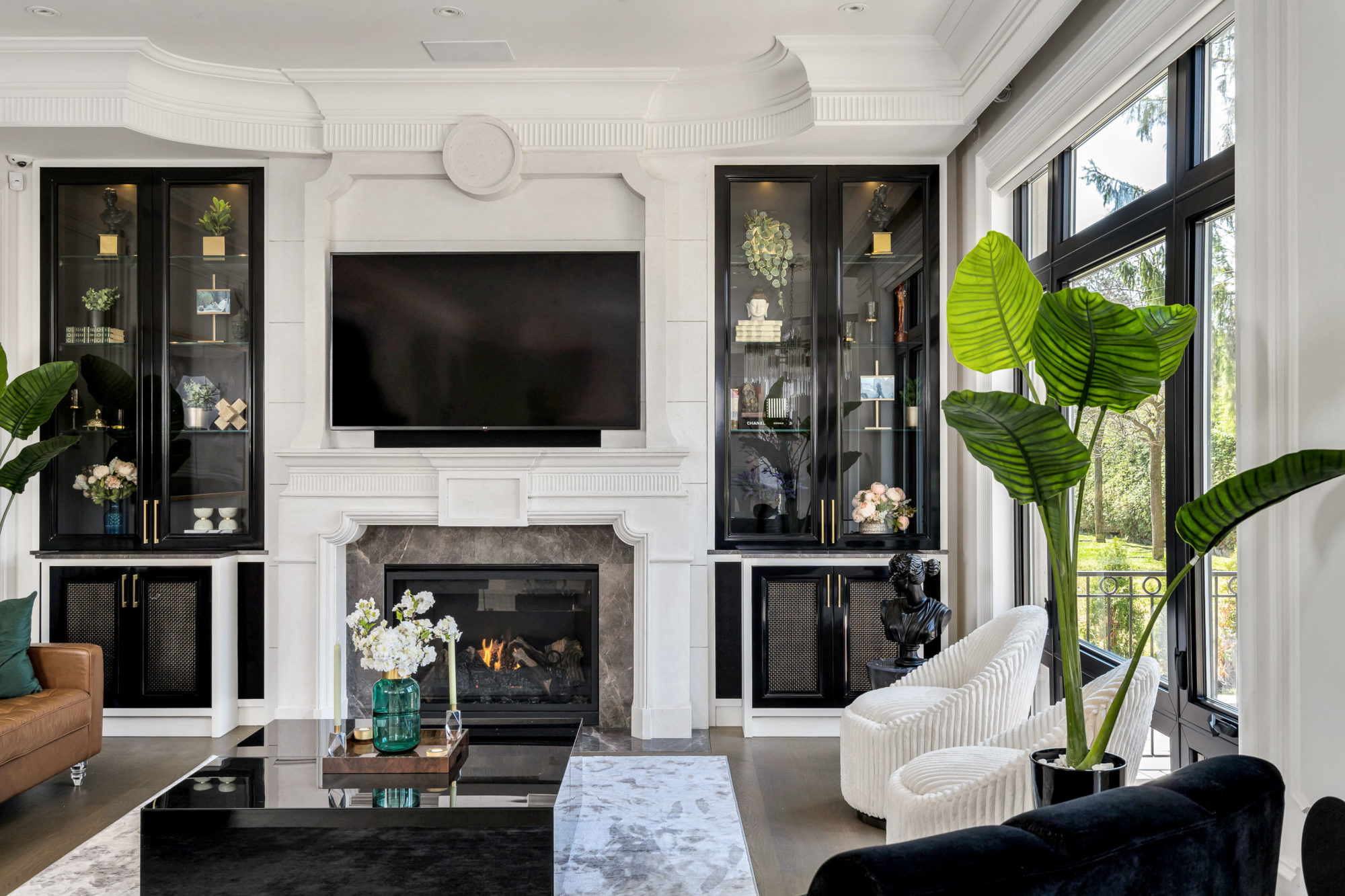 The library comes with a fireplace, French doors and built-in bookshelves: 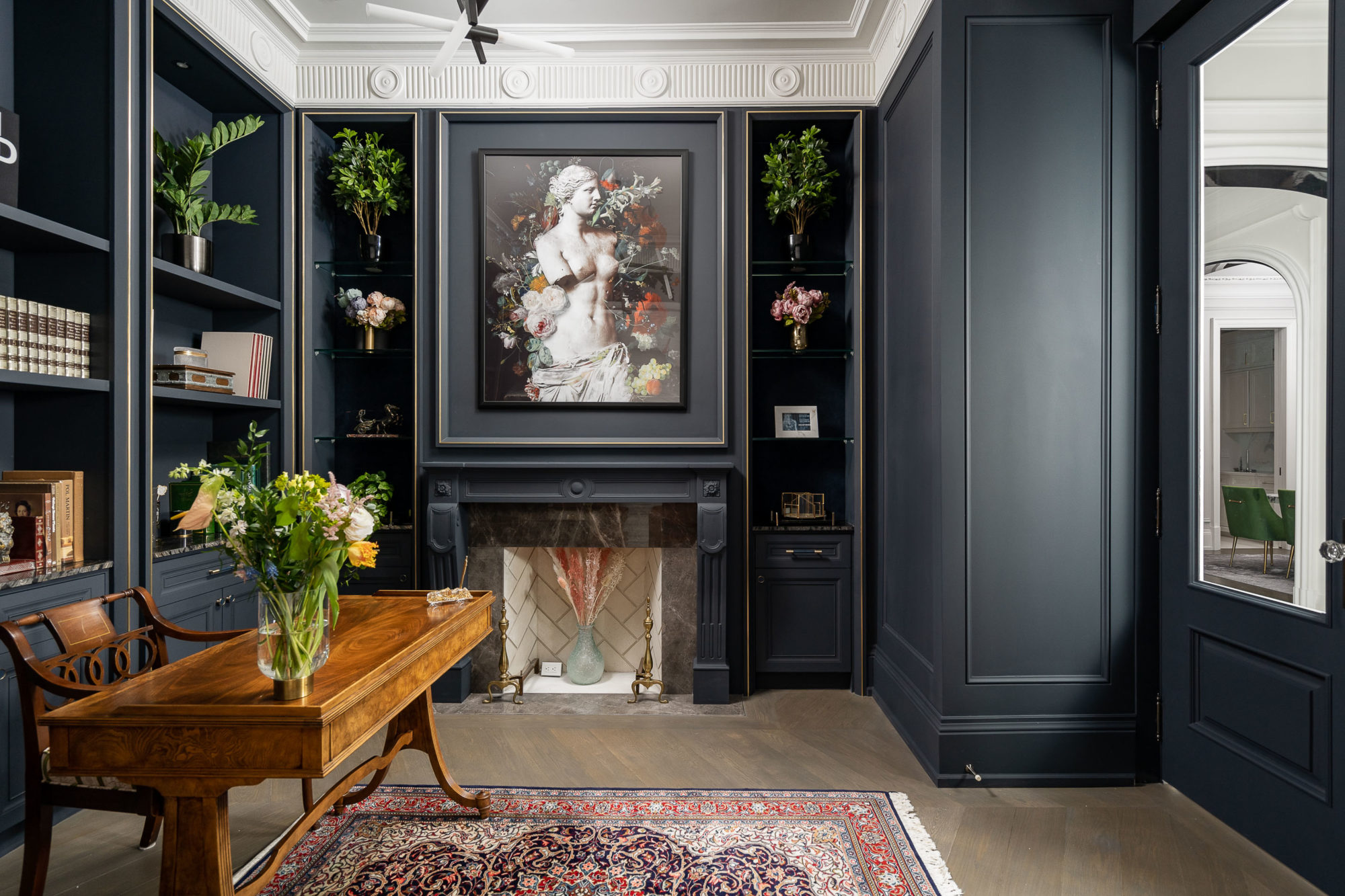 On the upper level, a Bethel chandelier hangs from the 14-foot-wide domed ceiling. Also in this pic: a mirror from Indonesia and custom wrought-iron railings: 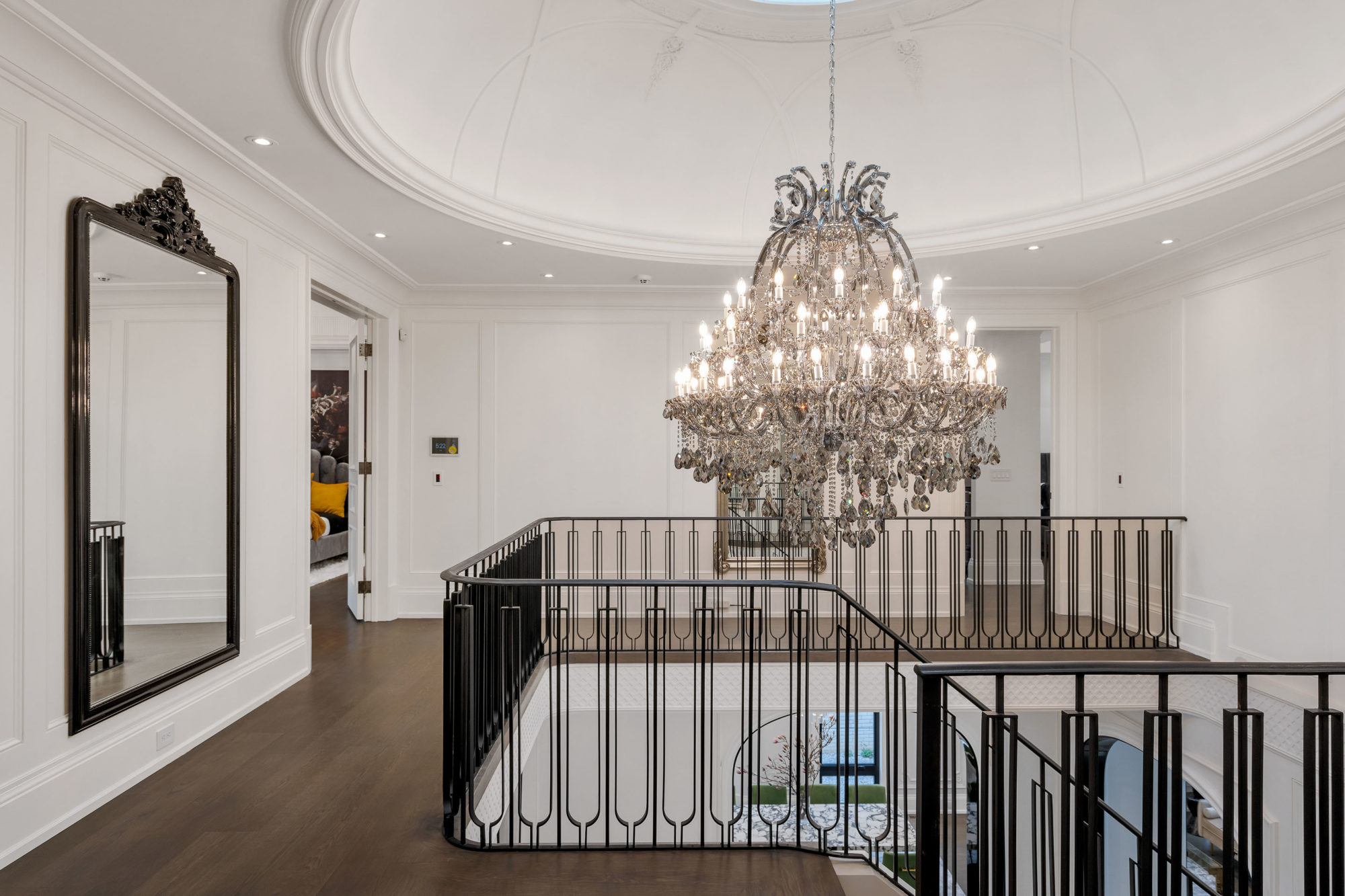 There are 11-foot coffered ceilings in the primary bedroom, which has its own fireplace and custom wallpaper inspired by 18th-century European prints: 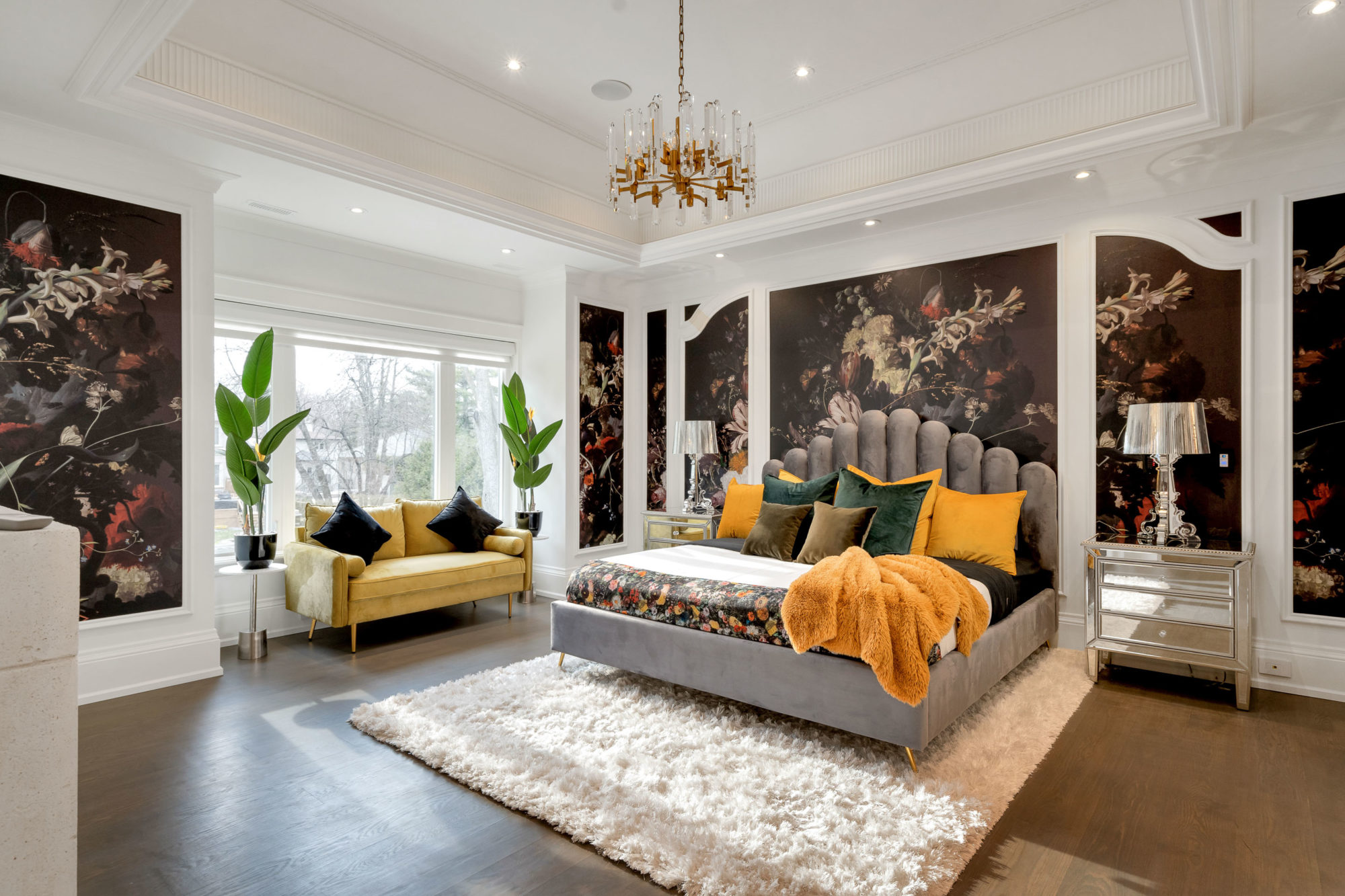 The primary bedroom has a walk-in closet with a skylight: 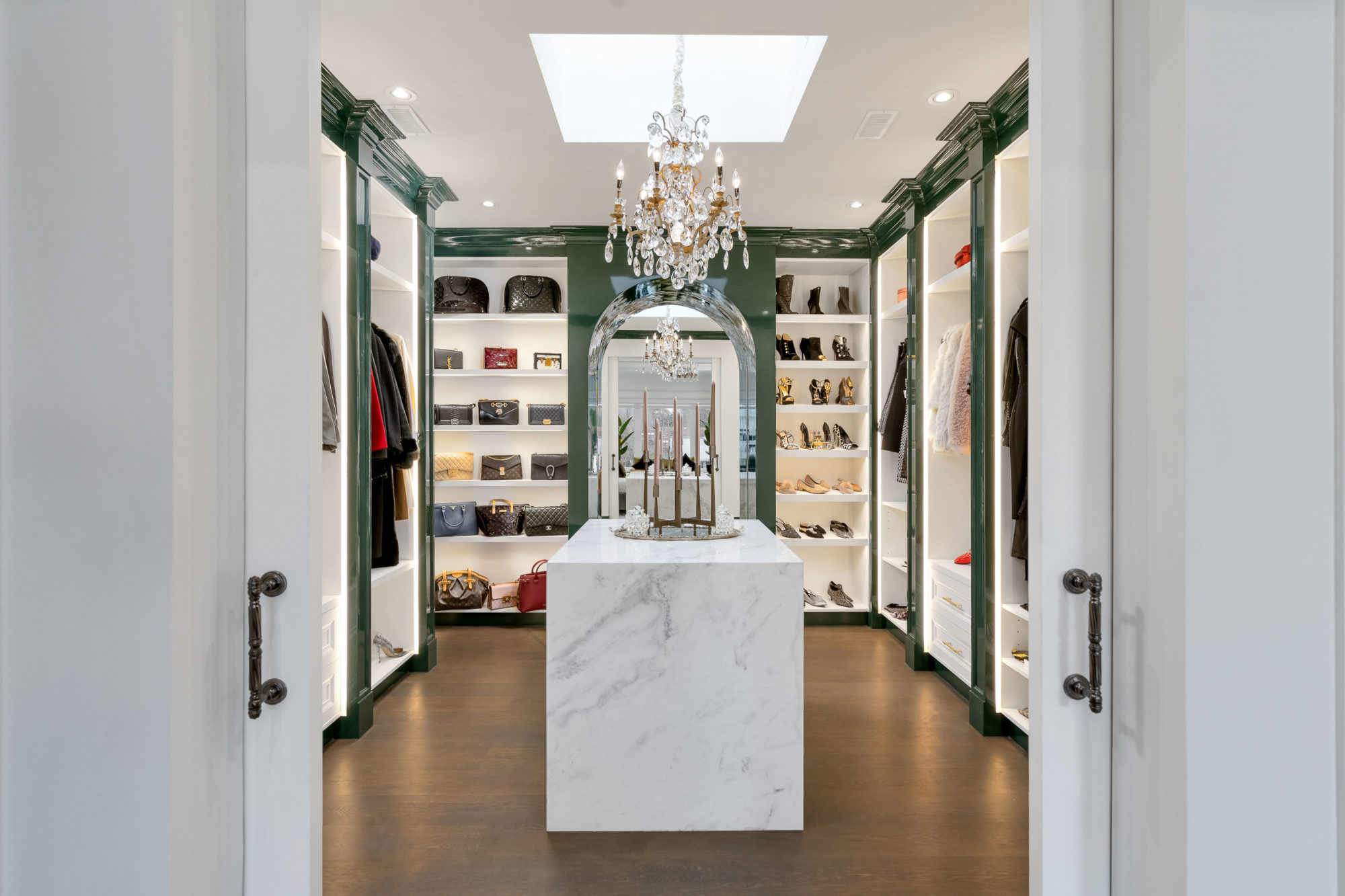 The five-piece primary ensuite bathroom has his-and-hers vanities, a soaker tub and a steam shower: 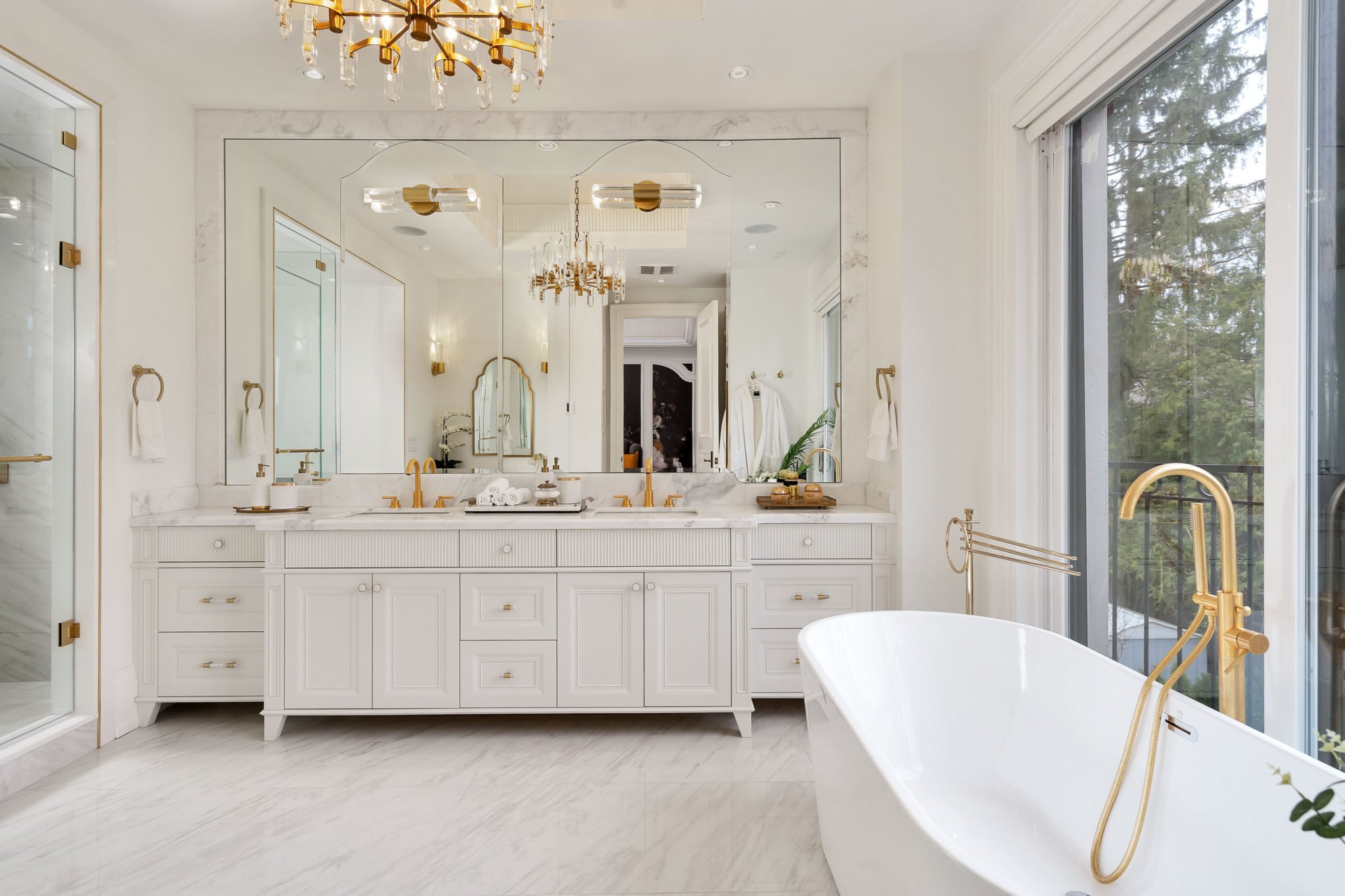 Out in the back, the kitchen window opens up to this stone patio, which has a breakfast bar and a barbecue: 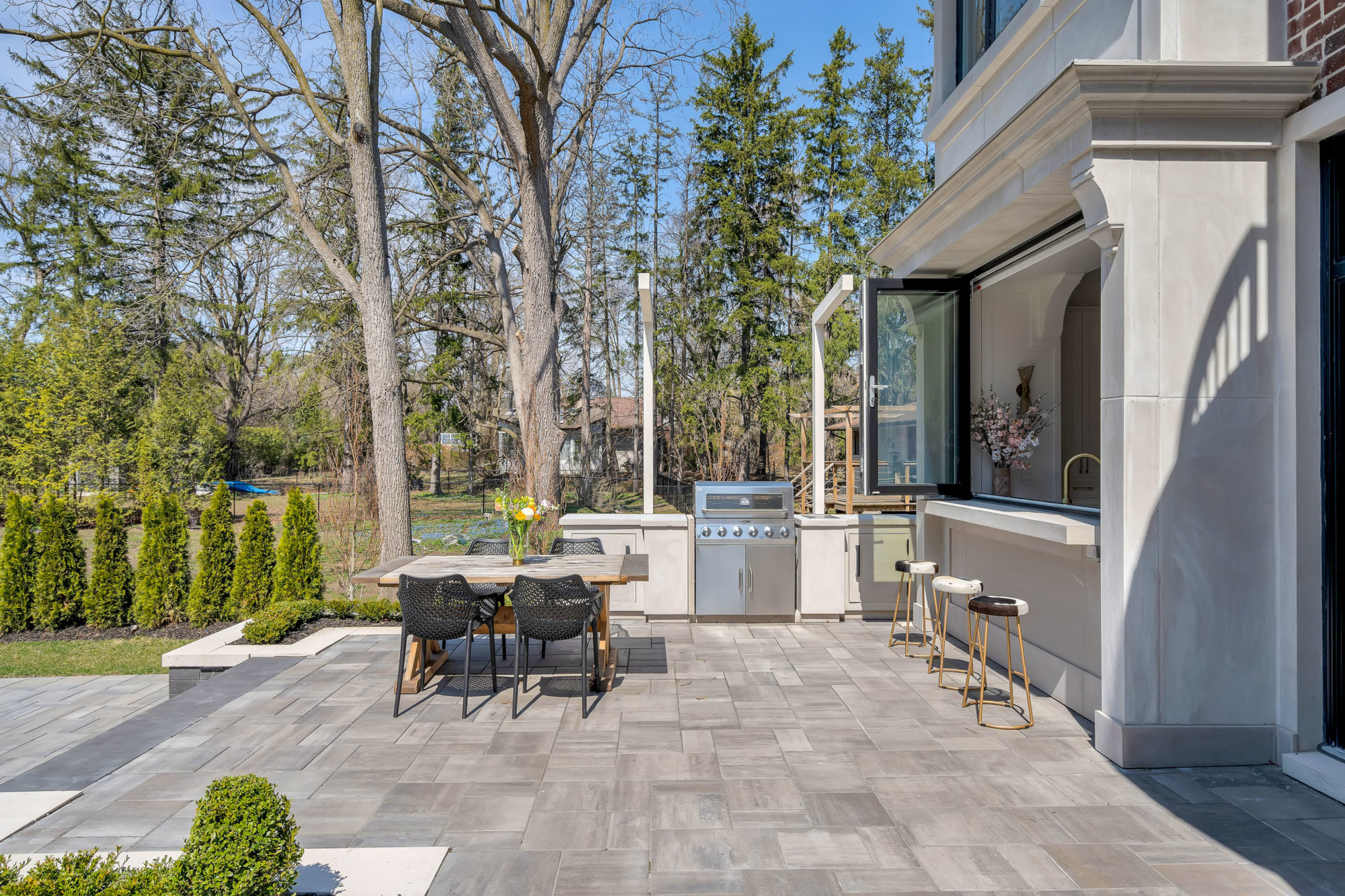 Here’s a look at the back of the house. There’s a stone fire pit in the garden: 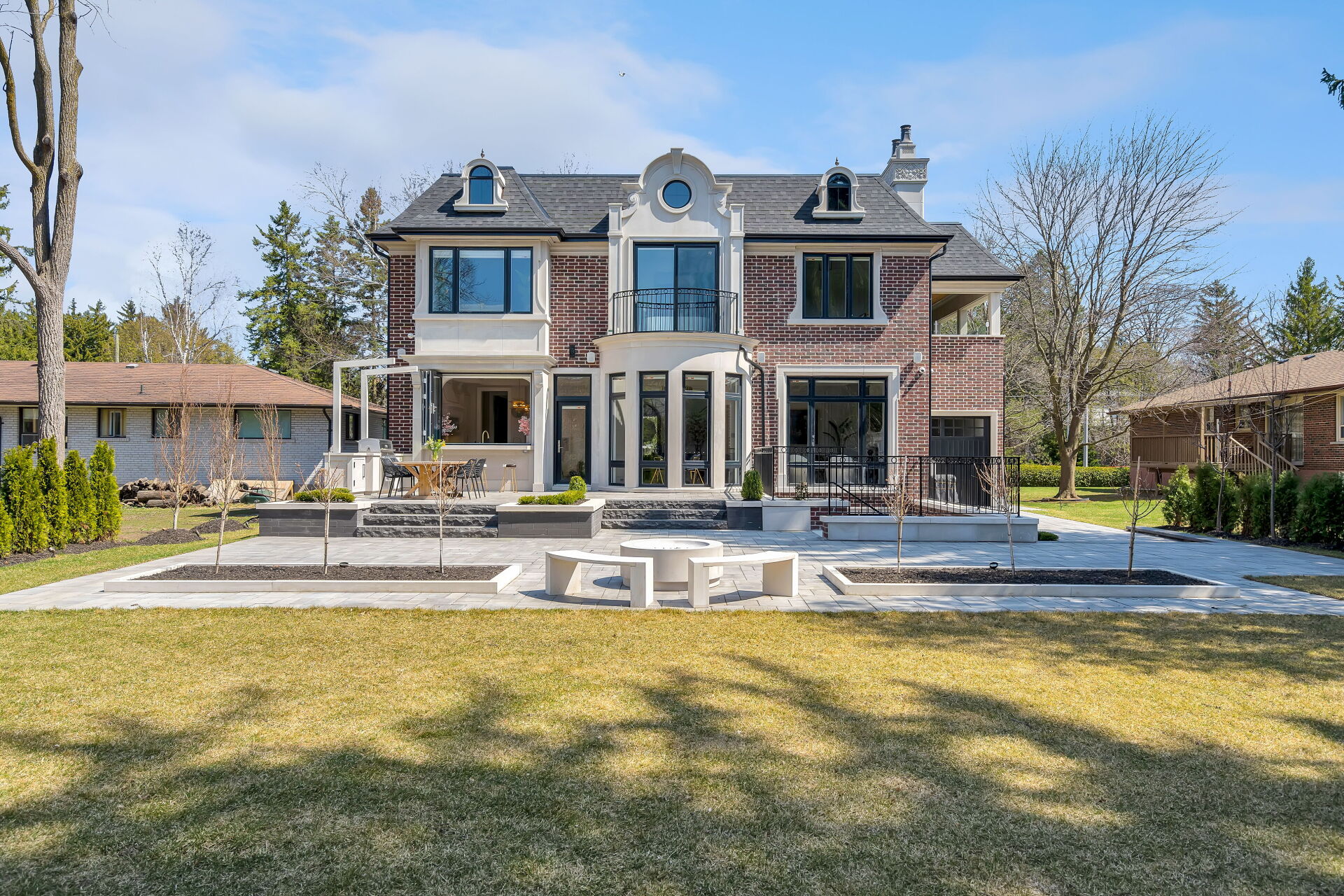 In the basement, this theatre room has heated floors, built-in Dolby speakers and an automated projector (playing, quite fittingly, a James Bond flick). The bar makes this the perfect place to sip martinis—shaken, not stirred—and host a movie marathon: 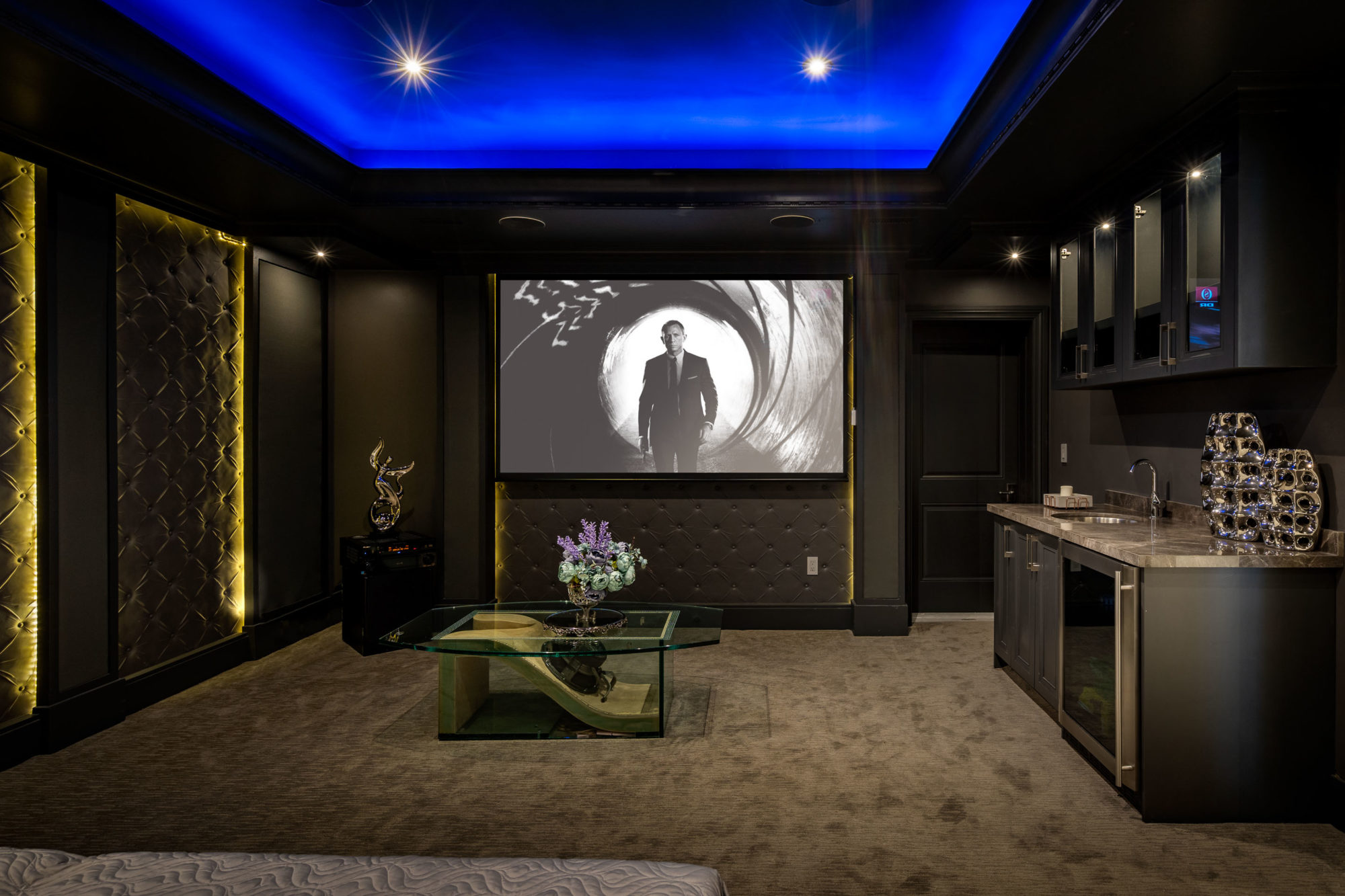