House of the Week: $2.7 million for a converted haberdashery in Little Portugal

House of the Week: $2.7 million for a converted haberdashery in Little Portugal

A two-bedroom, three-bathroom semi, located in Brockton Village. The place has a red-brick façade with big storefront windows. Out back, there’s a patio and yard.

Inside, there’s 2,100 square feet of living space across two floors. Another bonus: a 360-square-foot rooftop terrace, accessible using a staircase on the second floor.

Built in the 1880s, this property was originally a coal and wood storehouse, before becoming a haberdashery in the 1950s. The owner lived upstairs with his family, while operating his store in the front.

The store was shuttered after the owner’s death in the 1970s, but his widow kept living there until 2009, when she sold the place to its current owner.

In 2010, the owner, an architect, spent $600,000 gutting and renovating the place, which was in rough shape—the front was falling apart, the floors were rotted and the roof was sagging.

Over the next six months, the owner built a new façade, added supports for the original brick walls and added a new roof. She moved in shortly after. After deciding to downsize, the owner is now listing the place.

Here’s the foyer. During the reno job, the owner moved the front entrance to the side of the building: 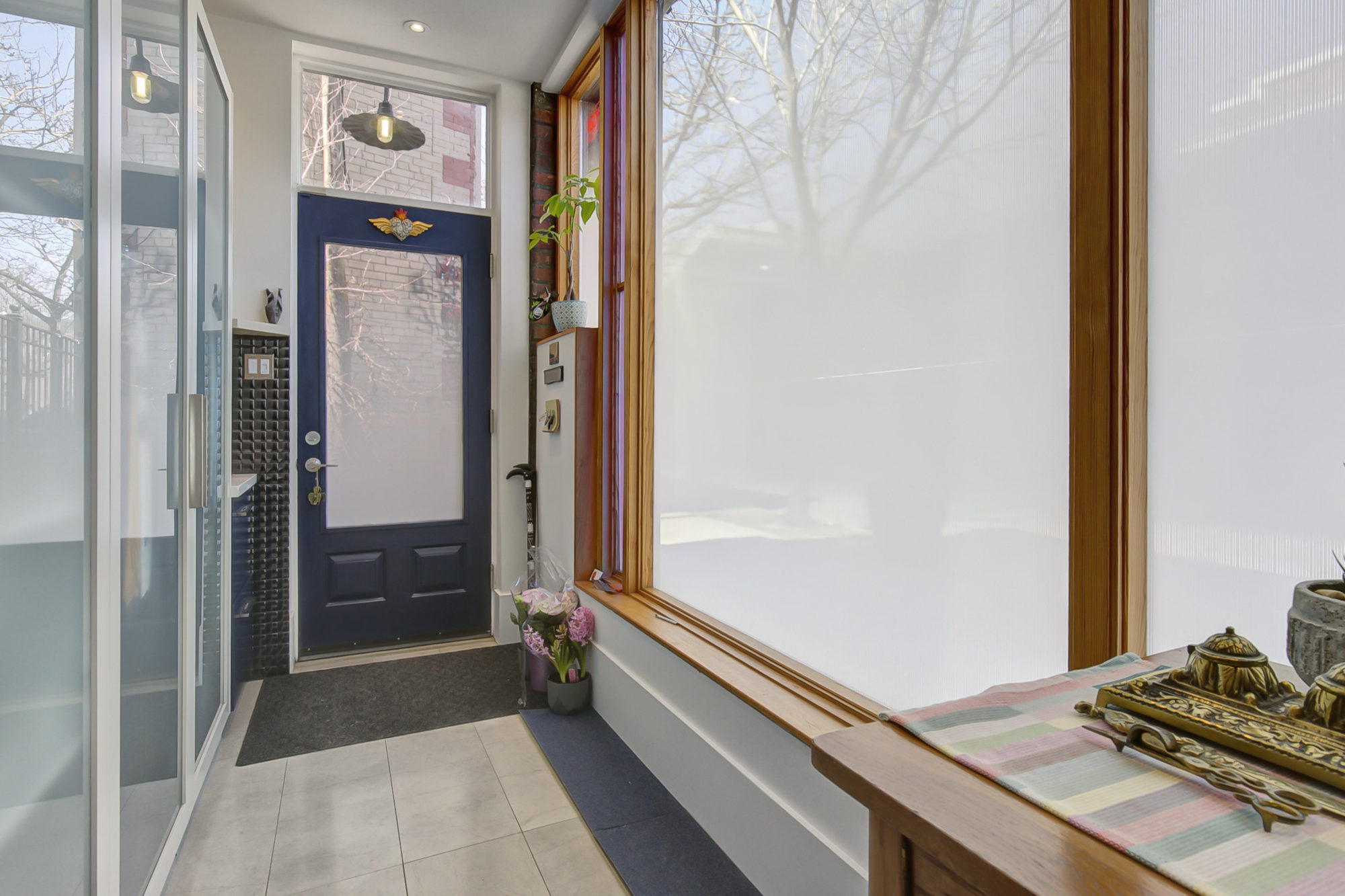 The foyer leads into the kitchen, which has Bosch appliances, quartz countertops and original maple flooring: 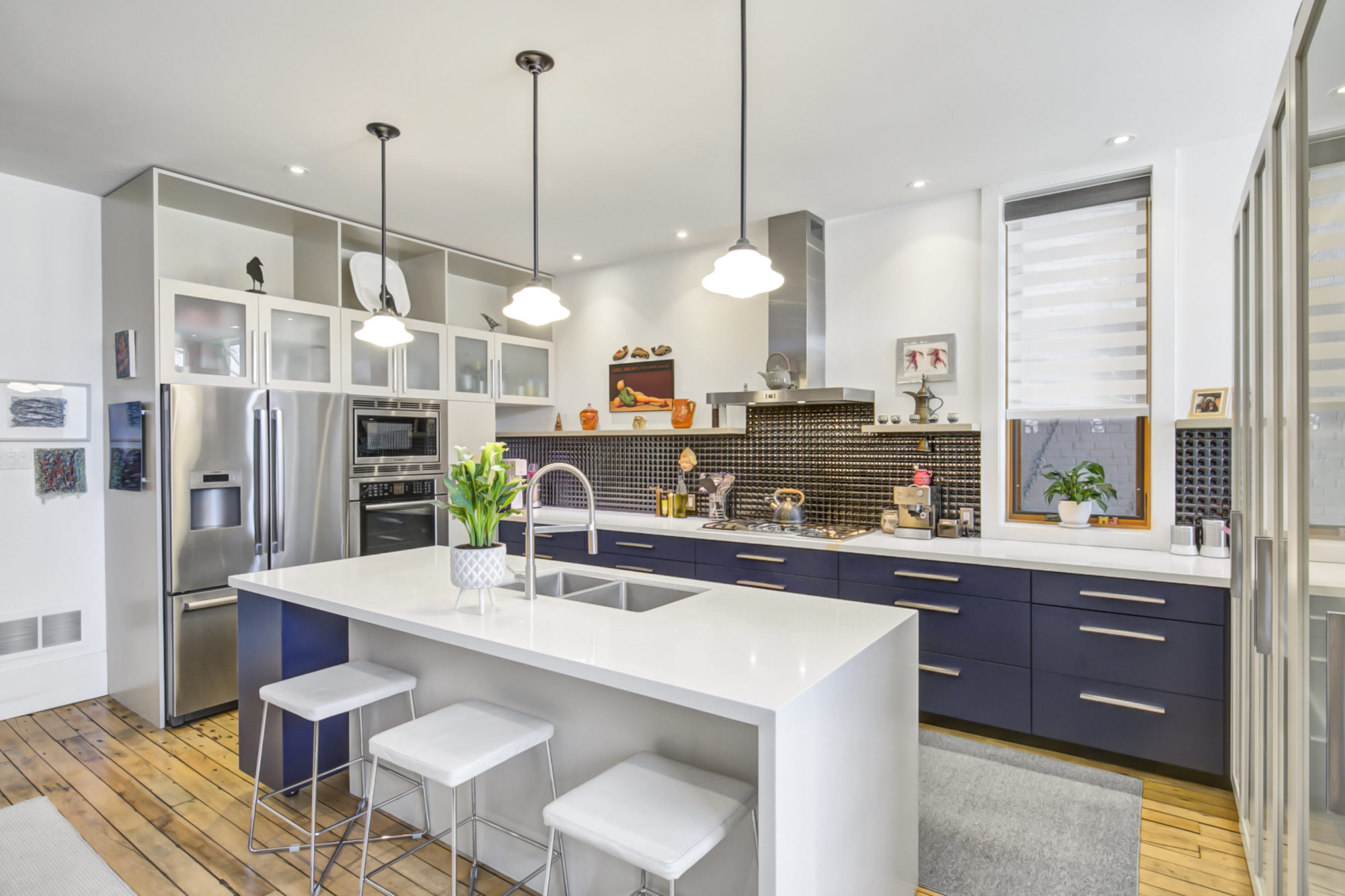 This breakfast area has an oak display cabinet and a custom bench for guests. The owner preserved the original exposed red-brick walling: 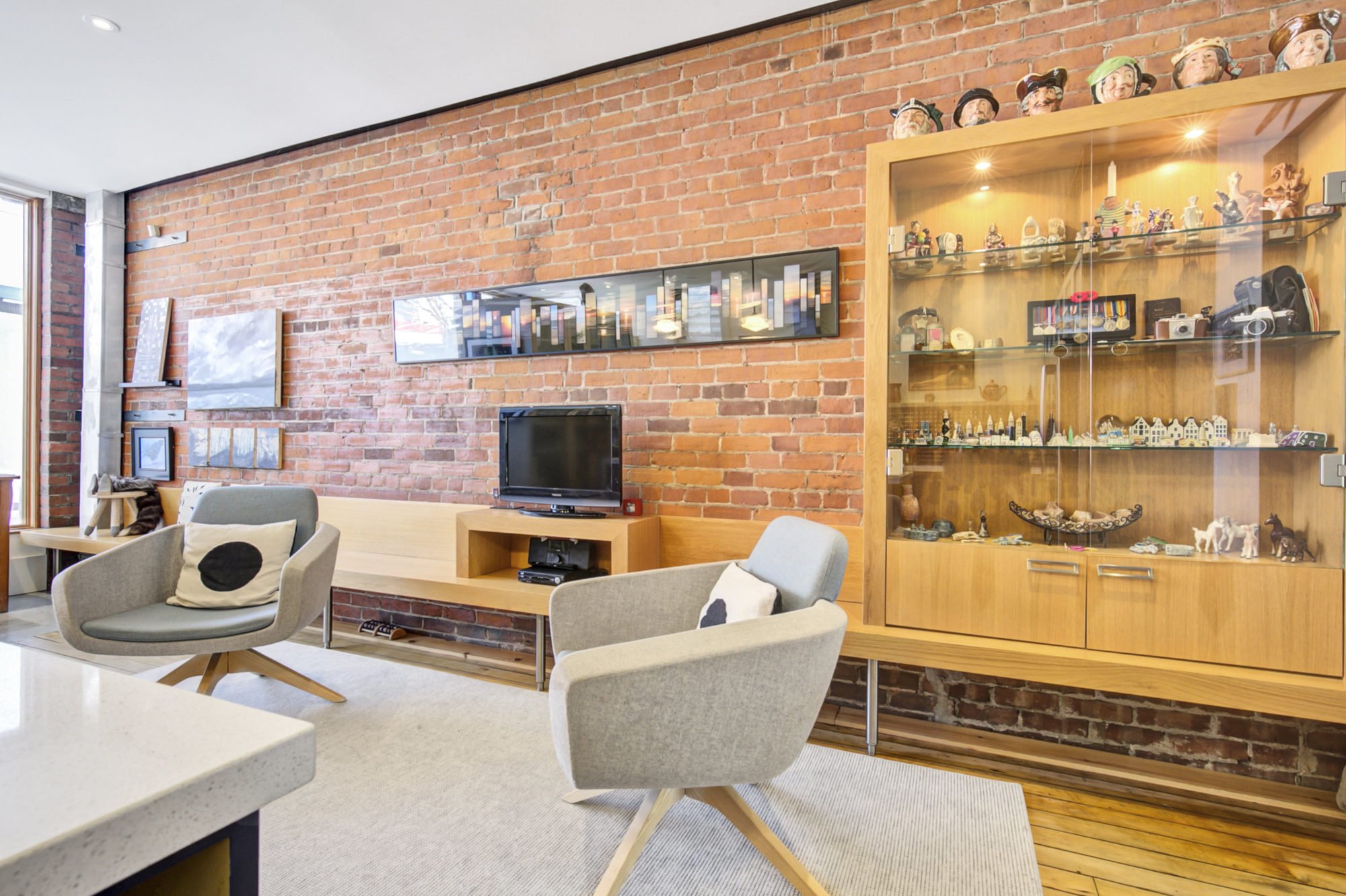 Next to the kitchen, the dining area has original exposed brick and engineered oak floors. The sideboard is a family heirloom made in Kincardine, Ontario: 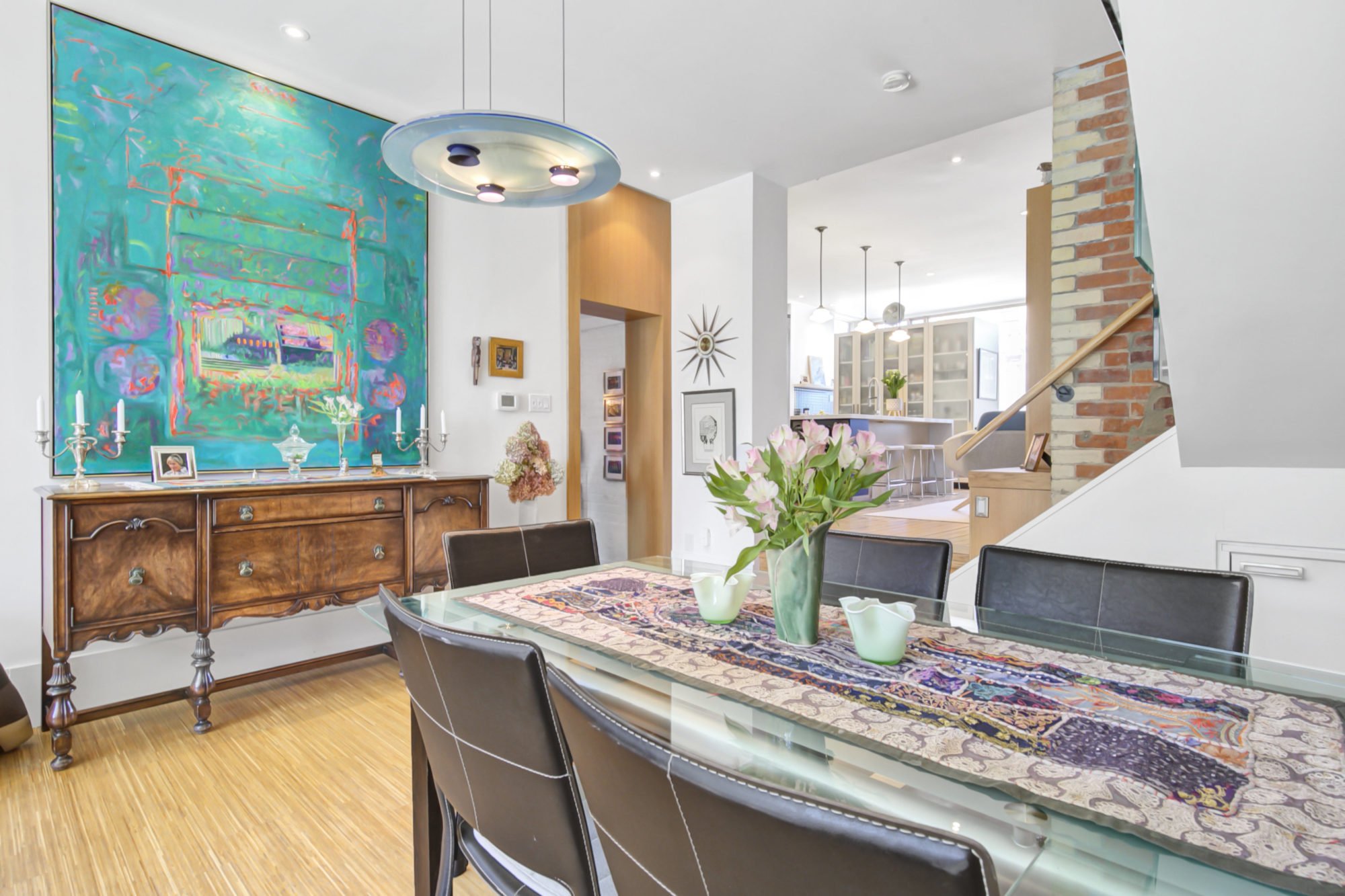 In the living area, the owner installed a built-in oak media unit and shelf, as well as oak window and door surrounds. Plus, there’s a wood-burning fireplace and a walk-out to the backyard: 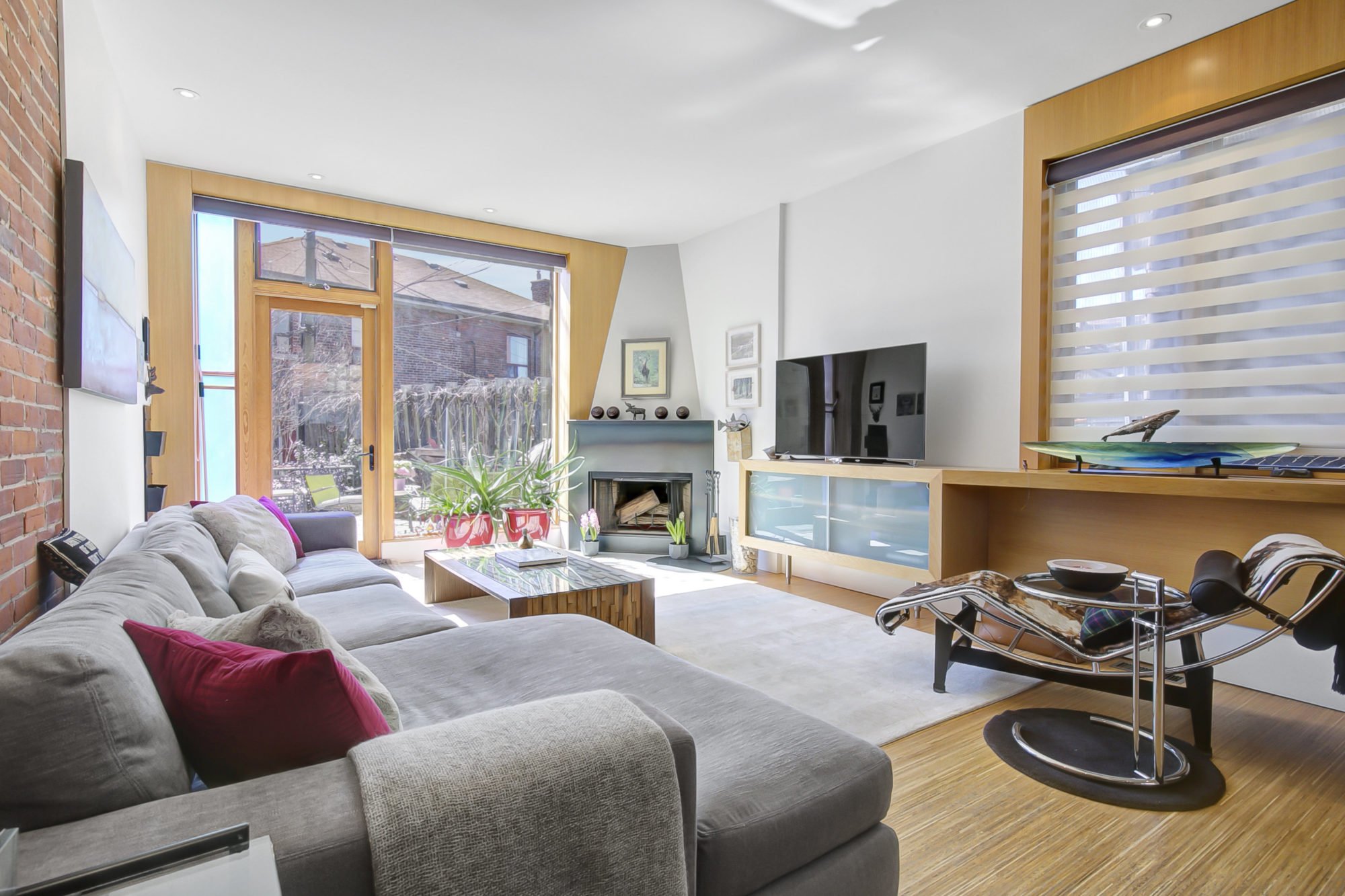 Upstairs, the primary bedroom has a custom oak vanity and a view of the backyard: 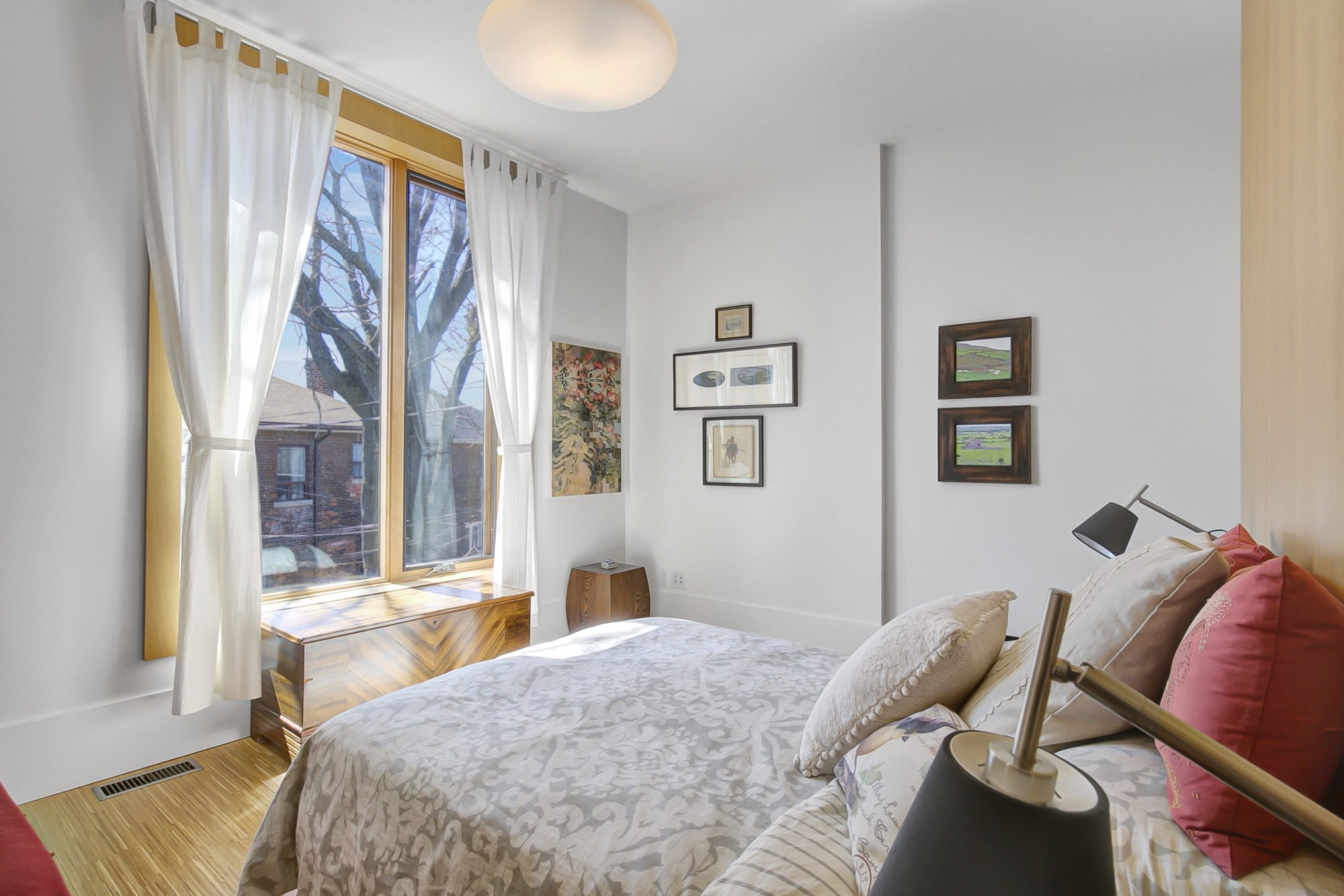 The walk-in closet in the primary bedroom: 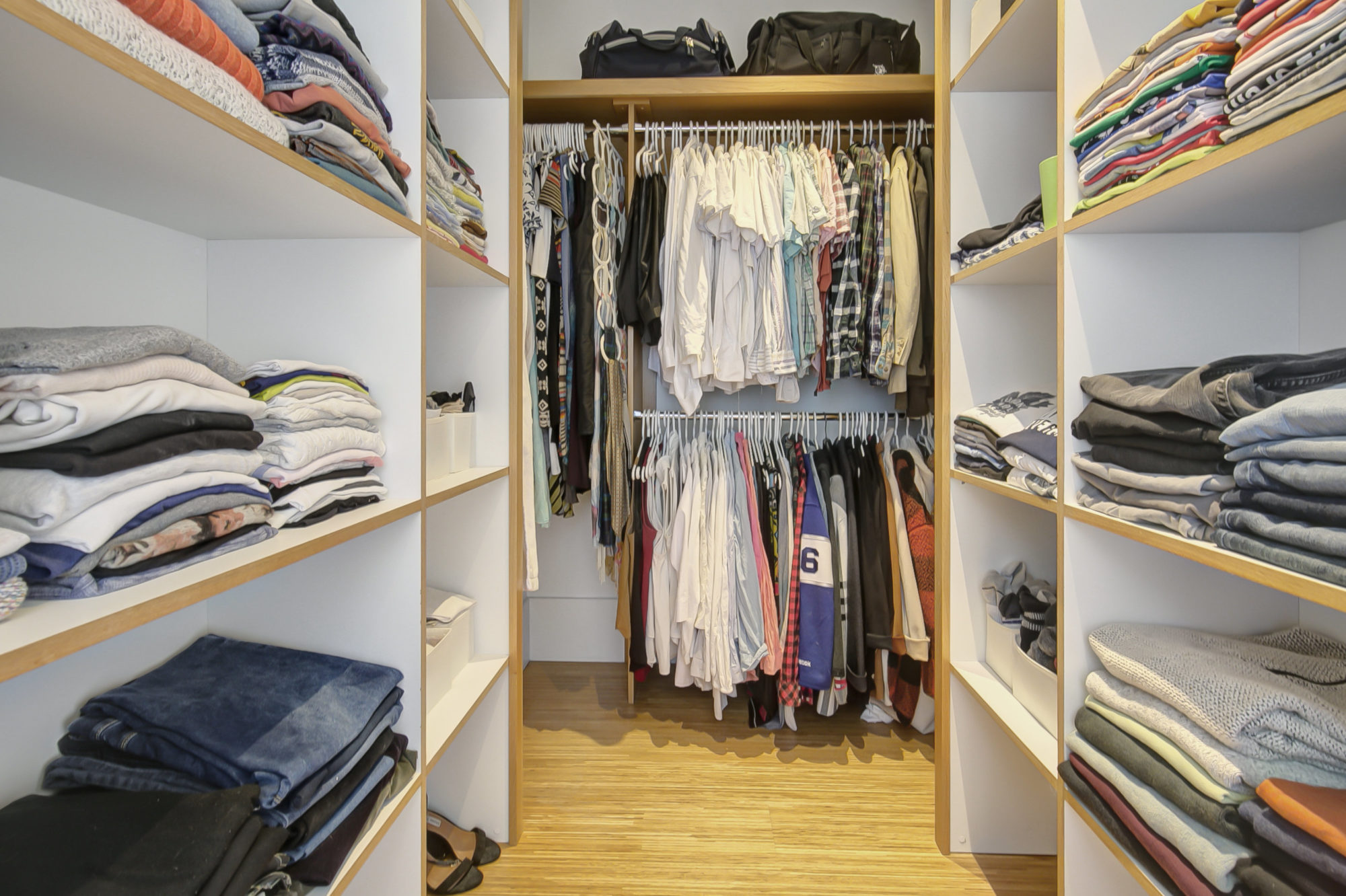 This three-piece ensuite primary bathroom has a soaker tub and French limestone walls and flooring: 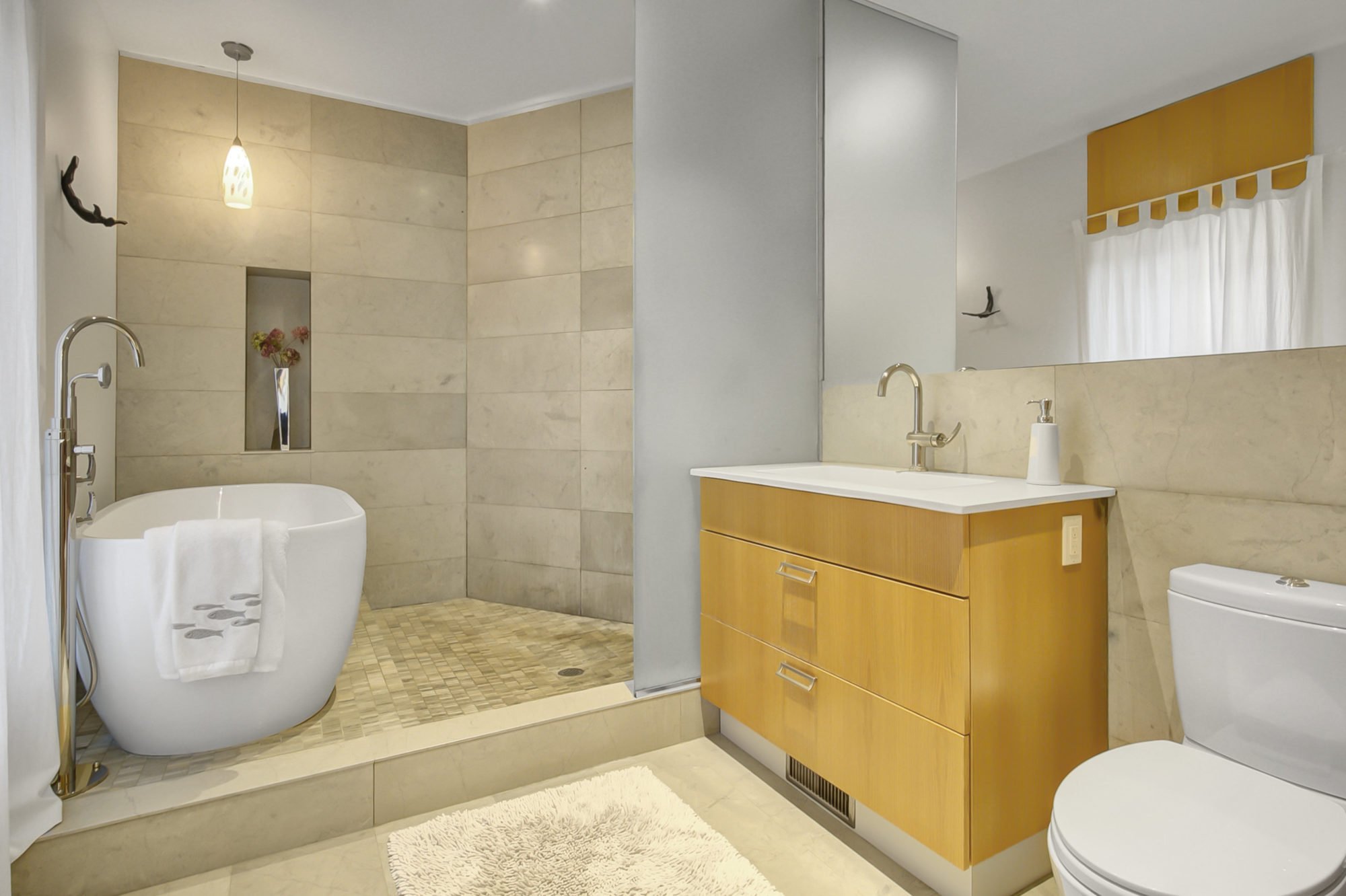 Currently used as an office, the second bedroom has engineered oak flooring and a built-in desk overlooking Dundas Street: 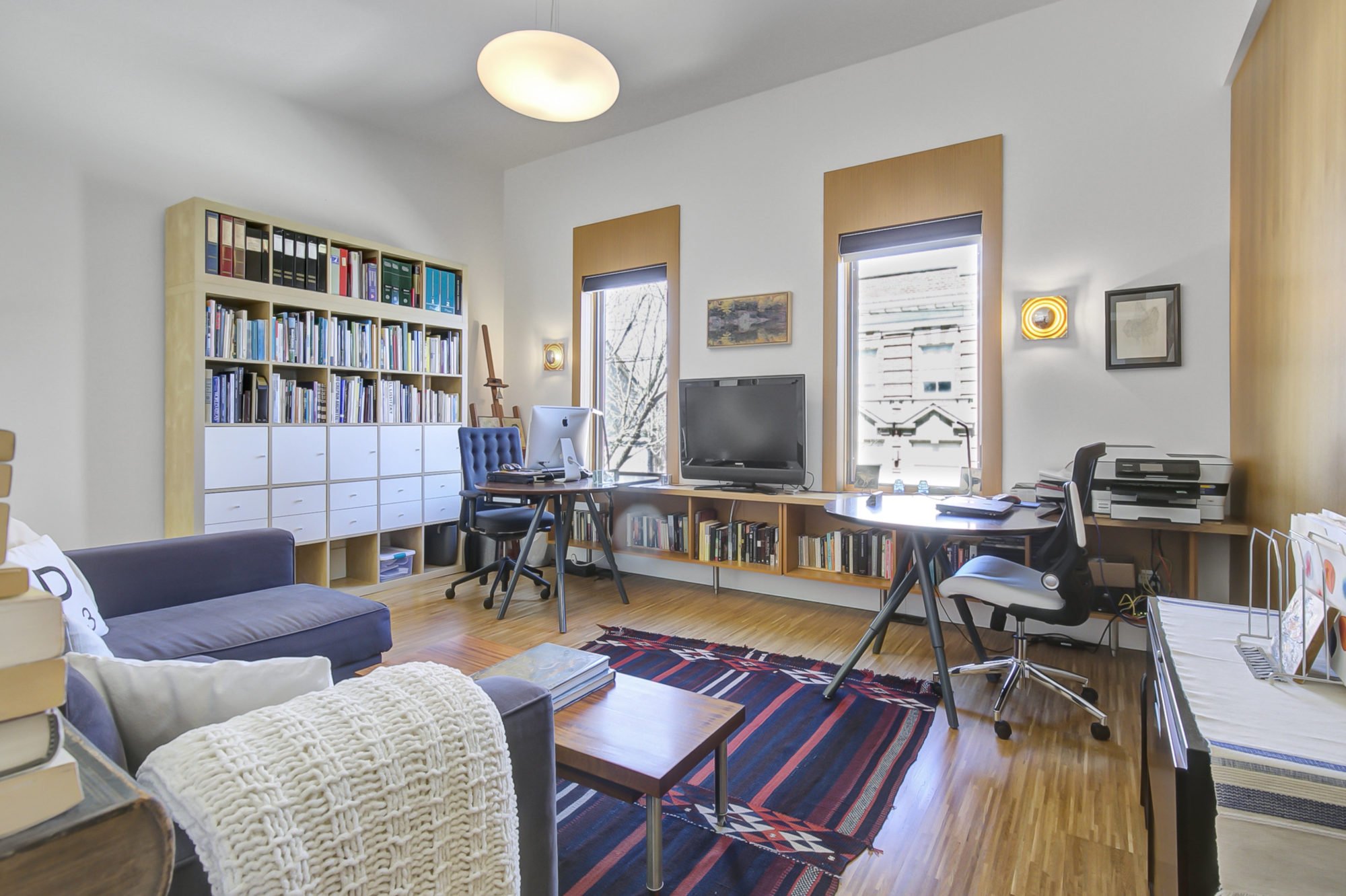 The second bedroom comes with a three-piece ensuite bathroom. Like the primary bathroom, its walls and flooring are French limestone: 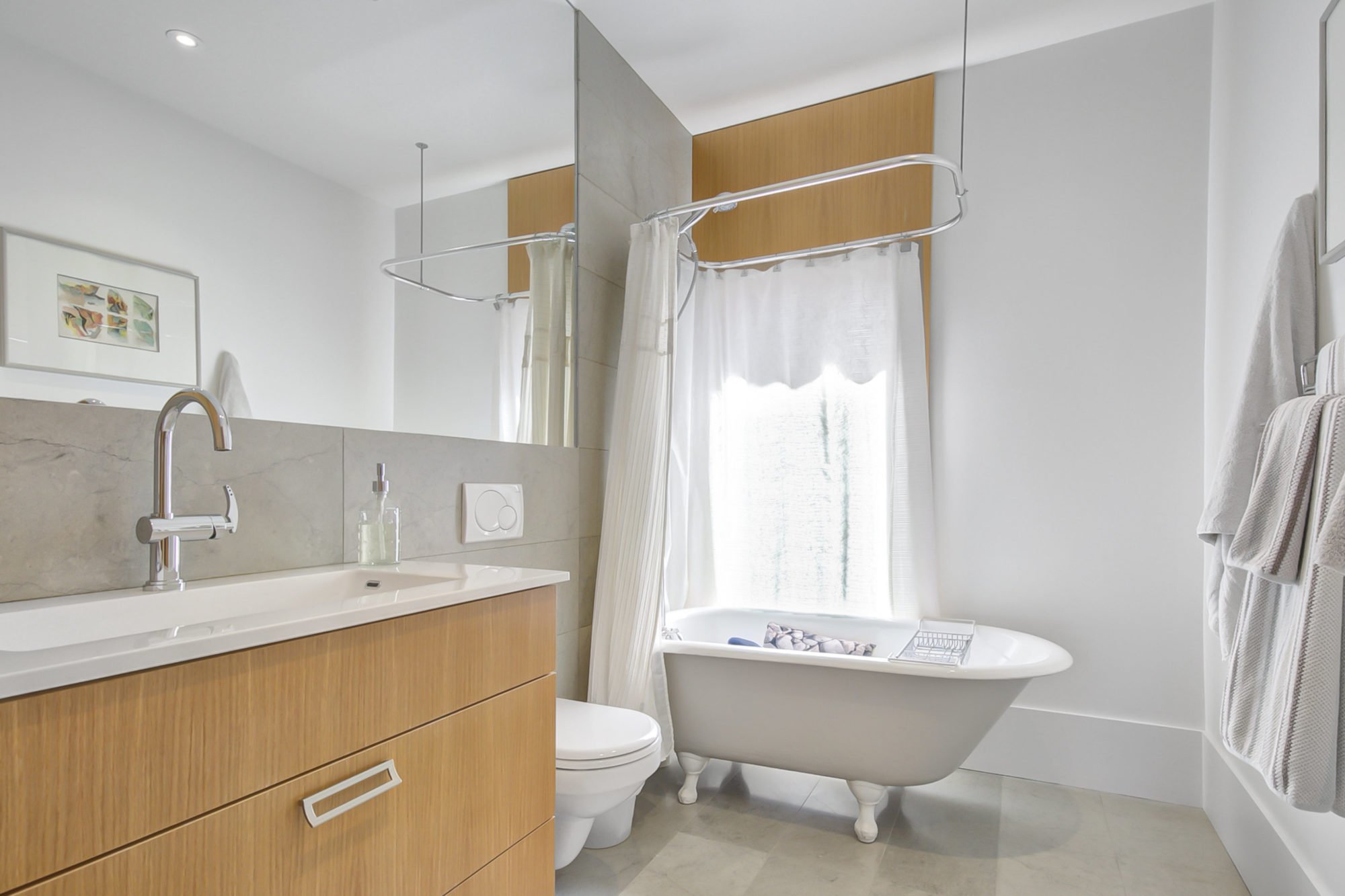 The partially finished basement has seven-foot ceilings and 550 square feet of storage space: 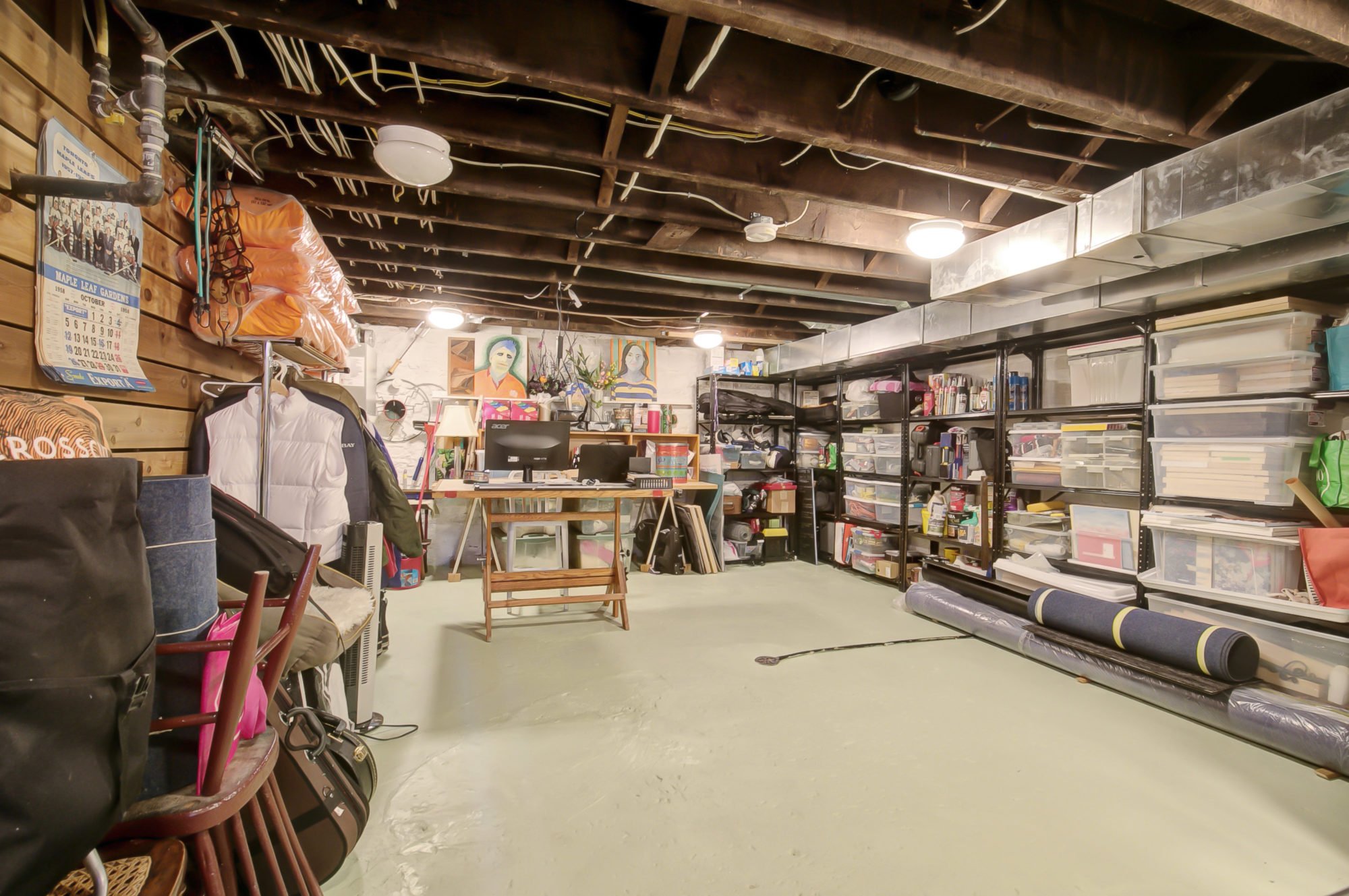 There’s a cedar deck and a built-in planter in the rooftop terrace: 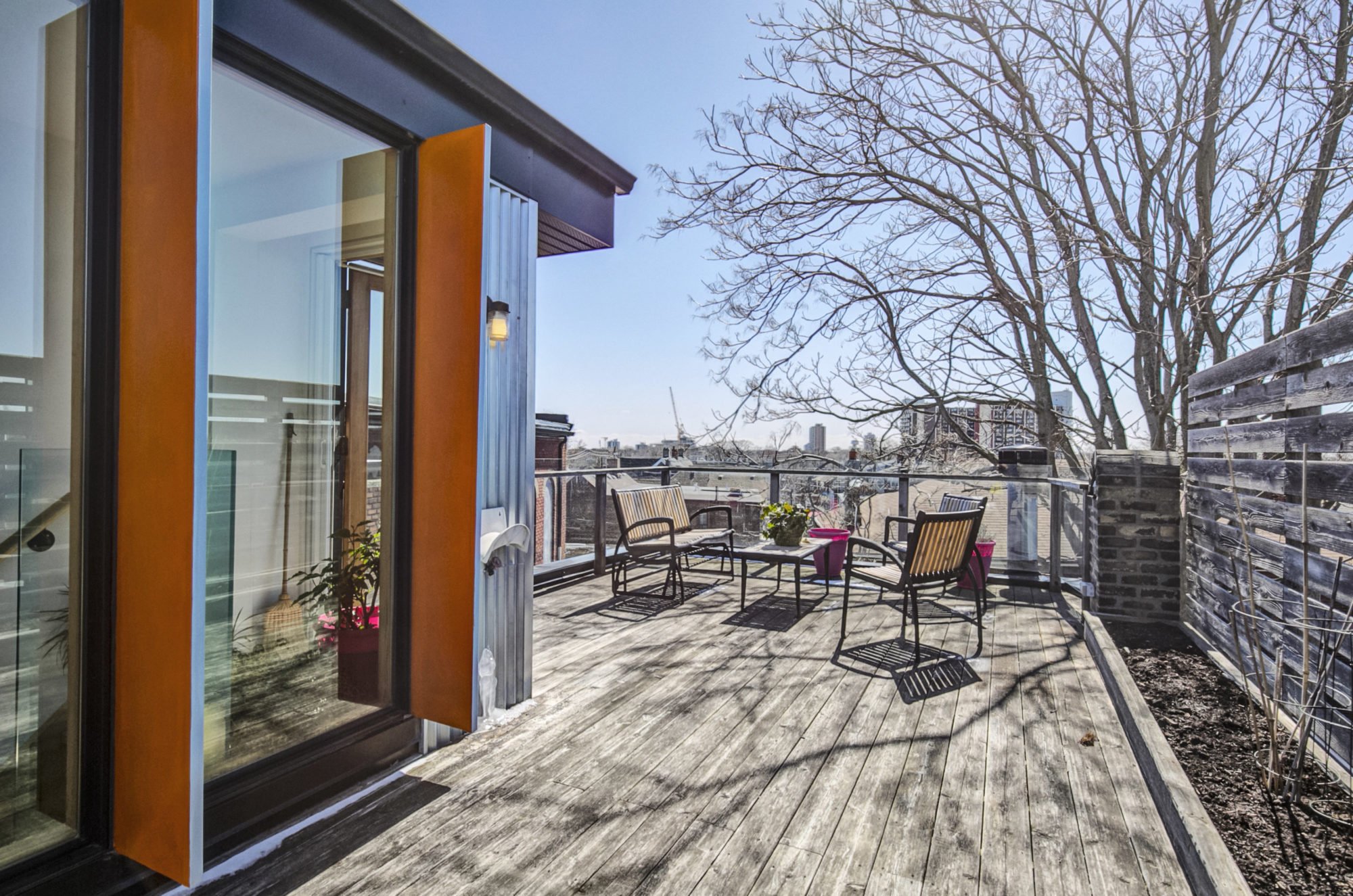 In the nearly 500-square-foot backyard, there’s a small stone patio and a barbecue area: 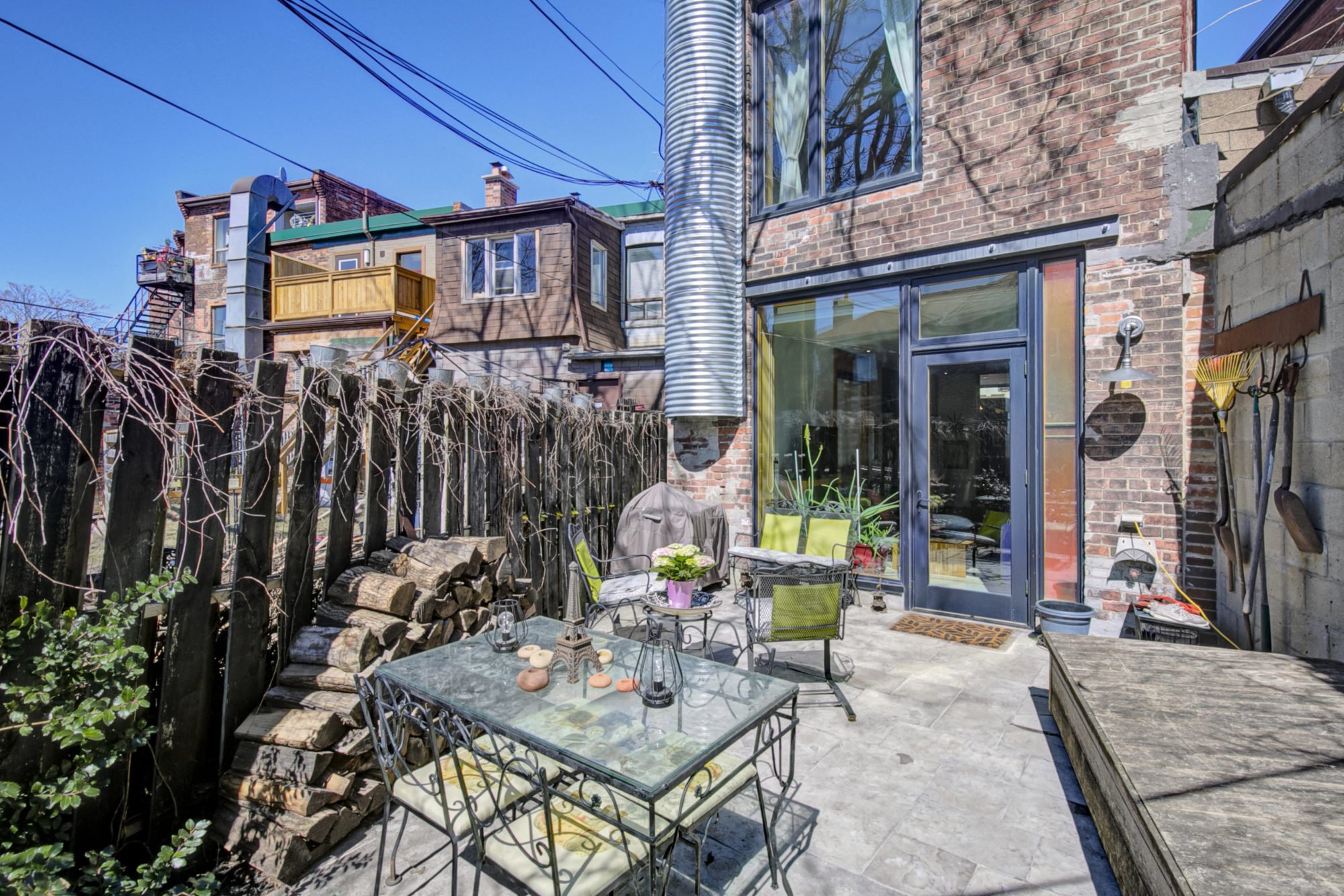