Ever dream of opening a business in your house? This Oakwood Village detached just hit the market for $1.2 million

Ever dream of opening a business in your house? This Oakwood Village detached just hit the market for $1.2 million

It’s got a residential and commercial designation, so you can live in the back and run a business in the front

A one-bed, three-bath detached in Oakwood Village, just a short walk from the shops and restaurants of Corso Italia. In contrast to the relatively humdrum grey stucco façade, it’s incredibly colourful on the inside, with art deco and east Asian design influences.

The building is zoned for commercial and residential use, with a large studio space in the front (in case buyers want to open a vegan donut shop or a pet-friendly café) and a livable two-storey suite in the back. Another bonus: it’s got a sunny rooftop patio.

Fast-forward to 2001, when a previous owner built a loft in the back and used the grandfathered commercial design designation to add a retail space up front, expanding the layout to nearly 1,800 square feet.

In 2012, the current owner, an advertising creative director, bought the place for $485,000. Her boyfriend, a freelance photographer, moved in with her a couple of years later and converted the space in the front into his studio.

The couple, who are both drawn to hand-crafted items, filled the interior with art deco lighting and east Asian artifacts they collected over the years (unfortunately, this place doesn’t come furnished). They also did some renovations, updating the kitchen, adding a coffered ceiling on the main level and installing new flooring throughout.

During the pandemic, the couple decided to move to the countryside. So they bought a farmhouse near Brantford and put their Toronto home on the market.

Near the front entrance, the owners commissioned this hand-painted flower mural: 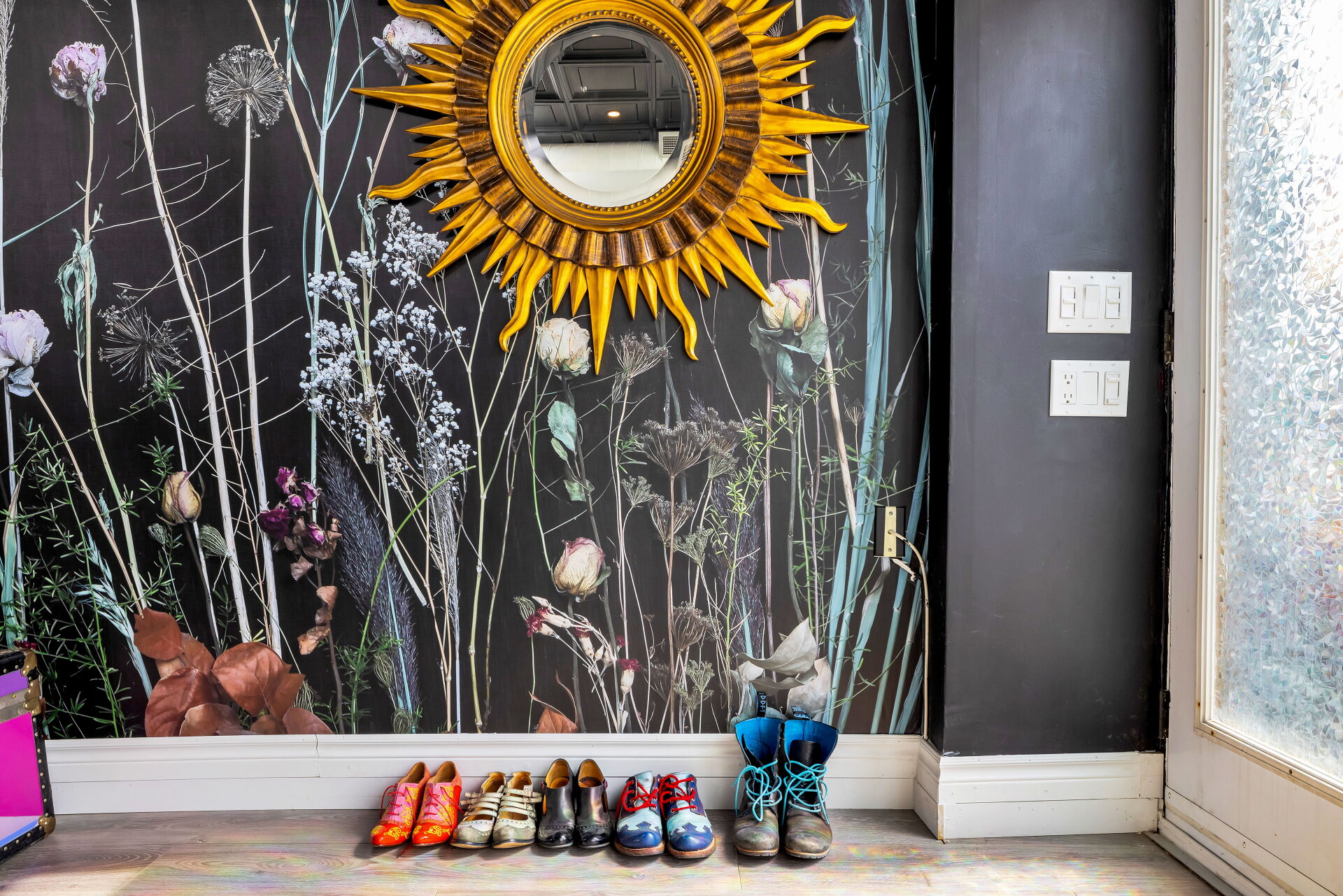 The studio has coffered ceilings and an antique French chandelier: 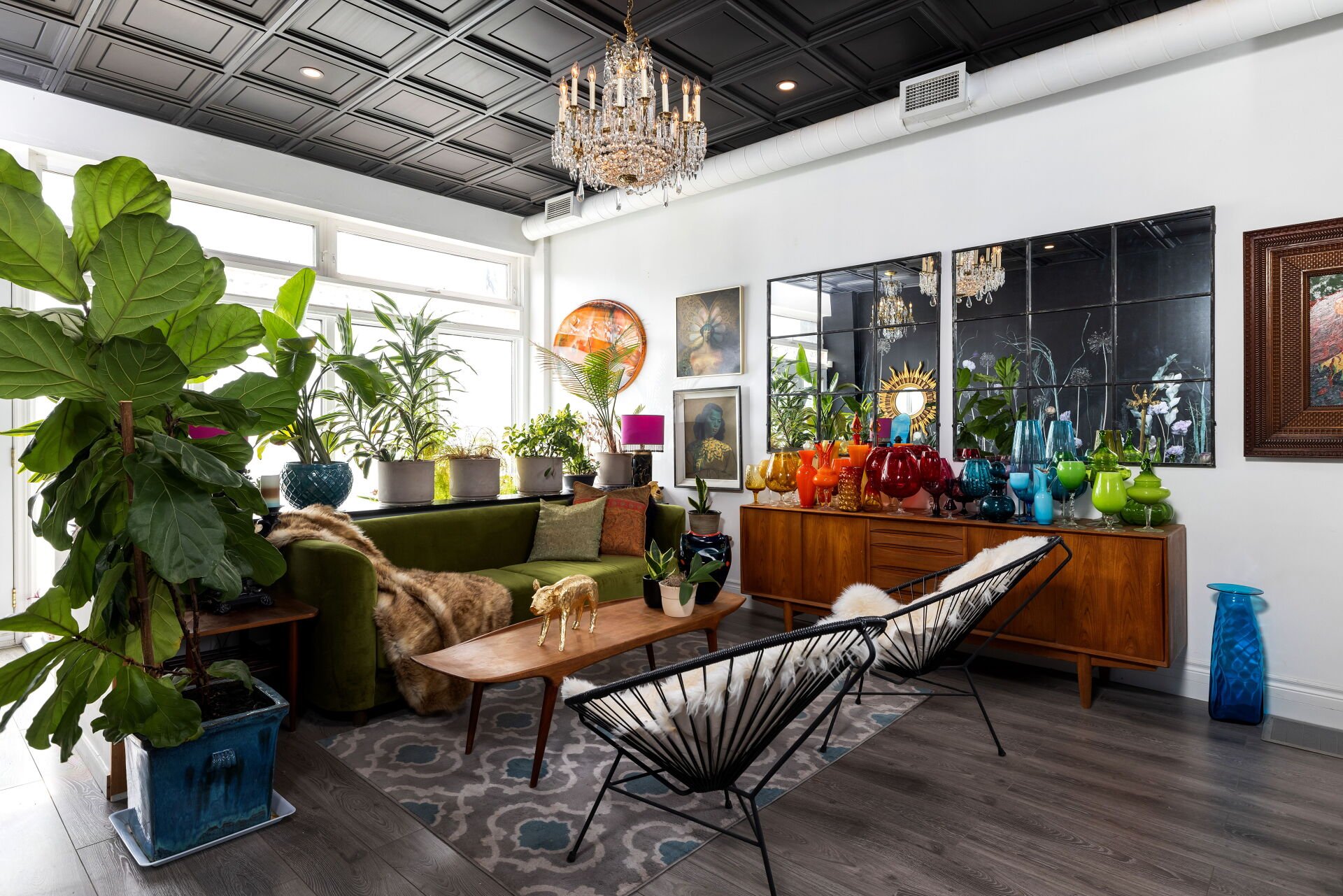 The owners decorated the studio with antiques, including a Japanese folding screen and a vintage art deco lamp: 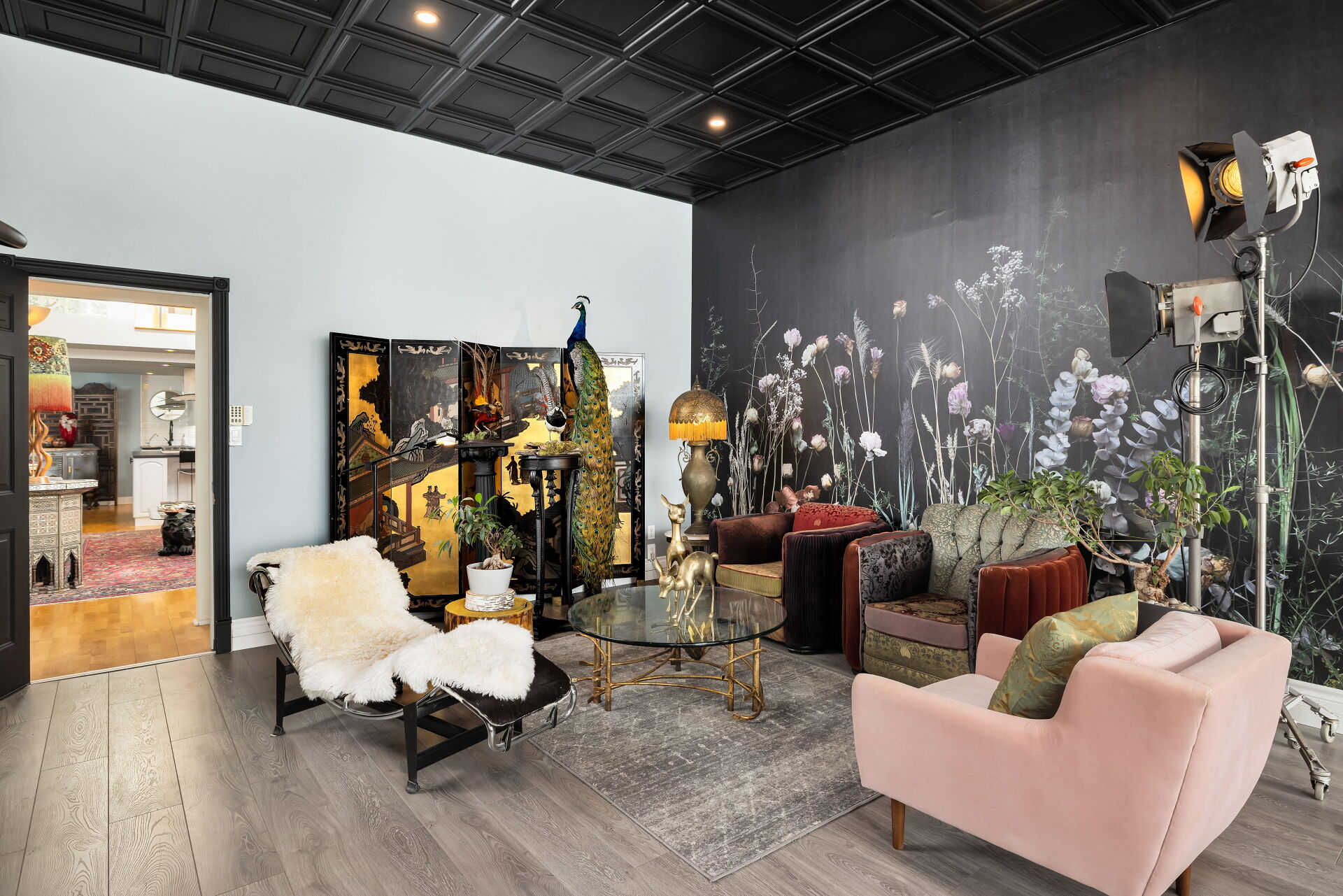 In the back of the main level, there’s a living area with an original wood-burning fireplace, plus a spiral staircase that accesses the loft and the basement: 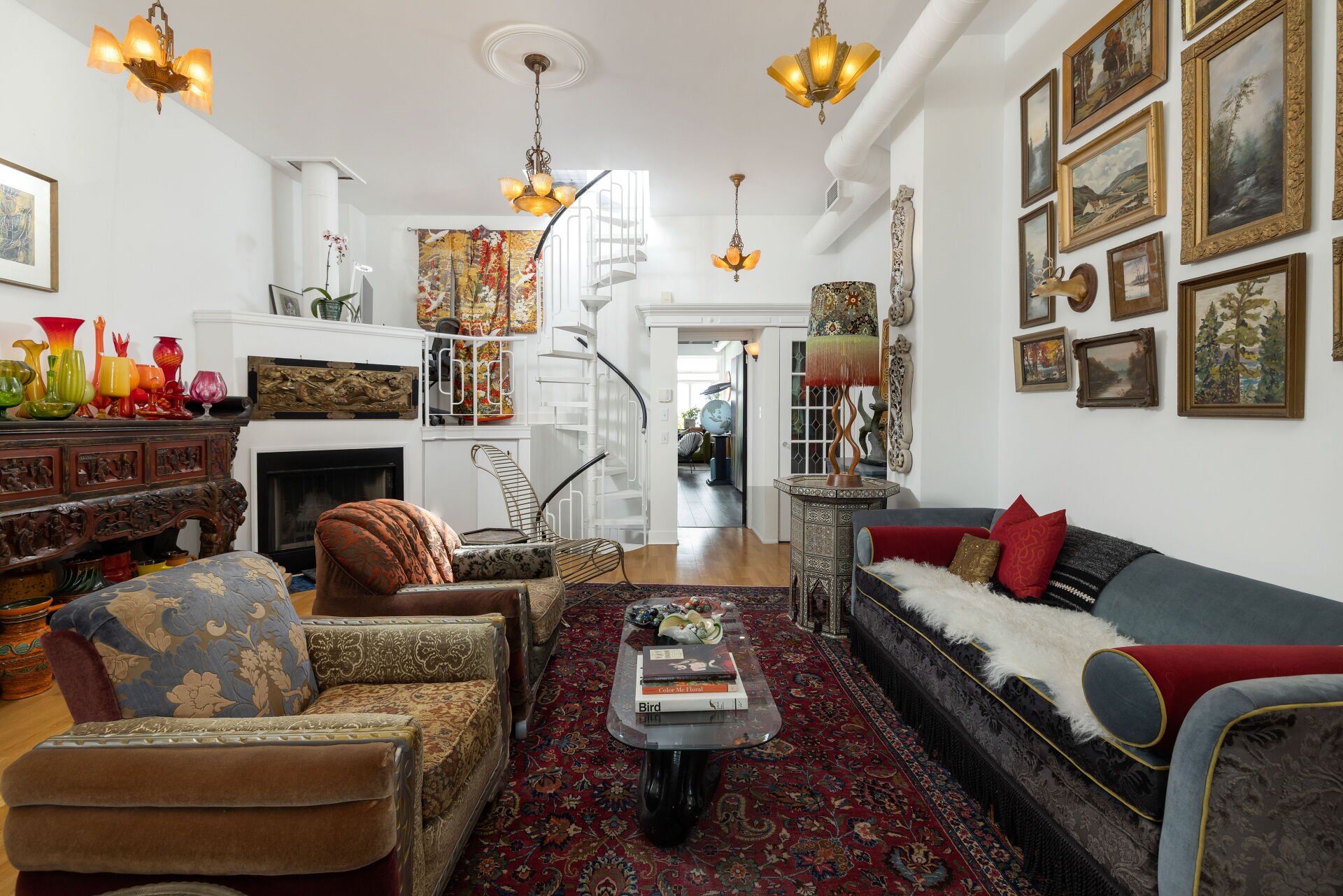 Halfway up the staircase, there’s a tiny workstation. The silk wall art is an imported bridal uchikake, a kimono worn during traditional Japanese wedding ceremonies: 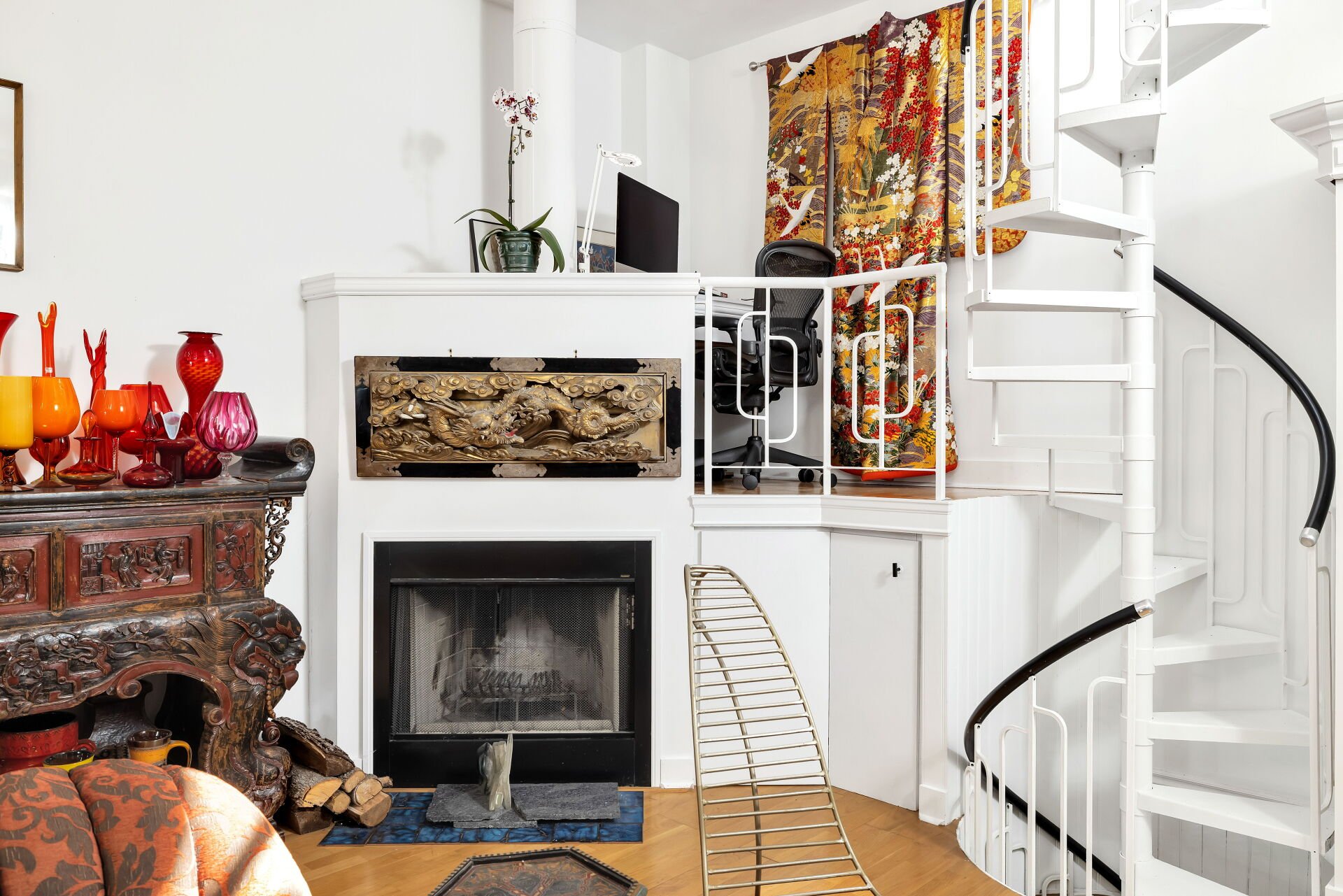 The owners recently added a new tile backsplash and Formica counters in the kitchen: 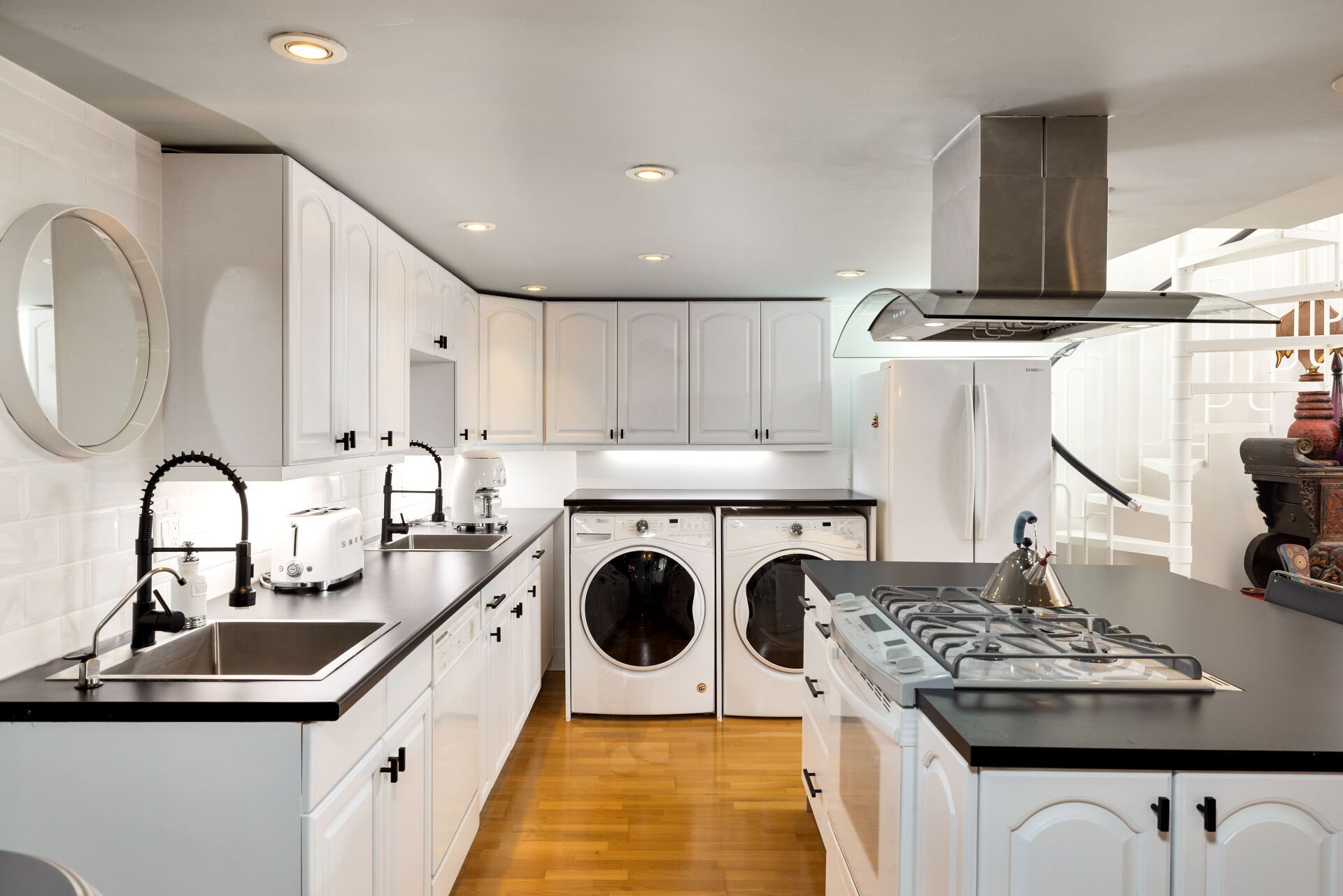 Next to the kitchen, this small dining area has a vintage folding screen and an antique Venetian mirror: 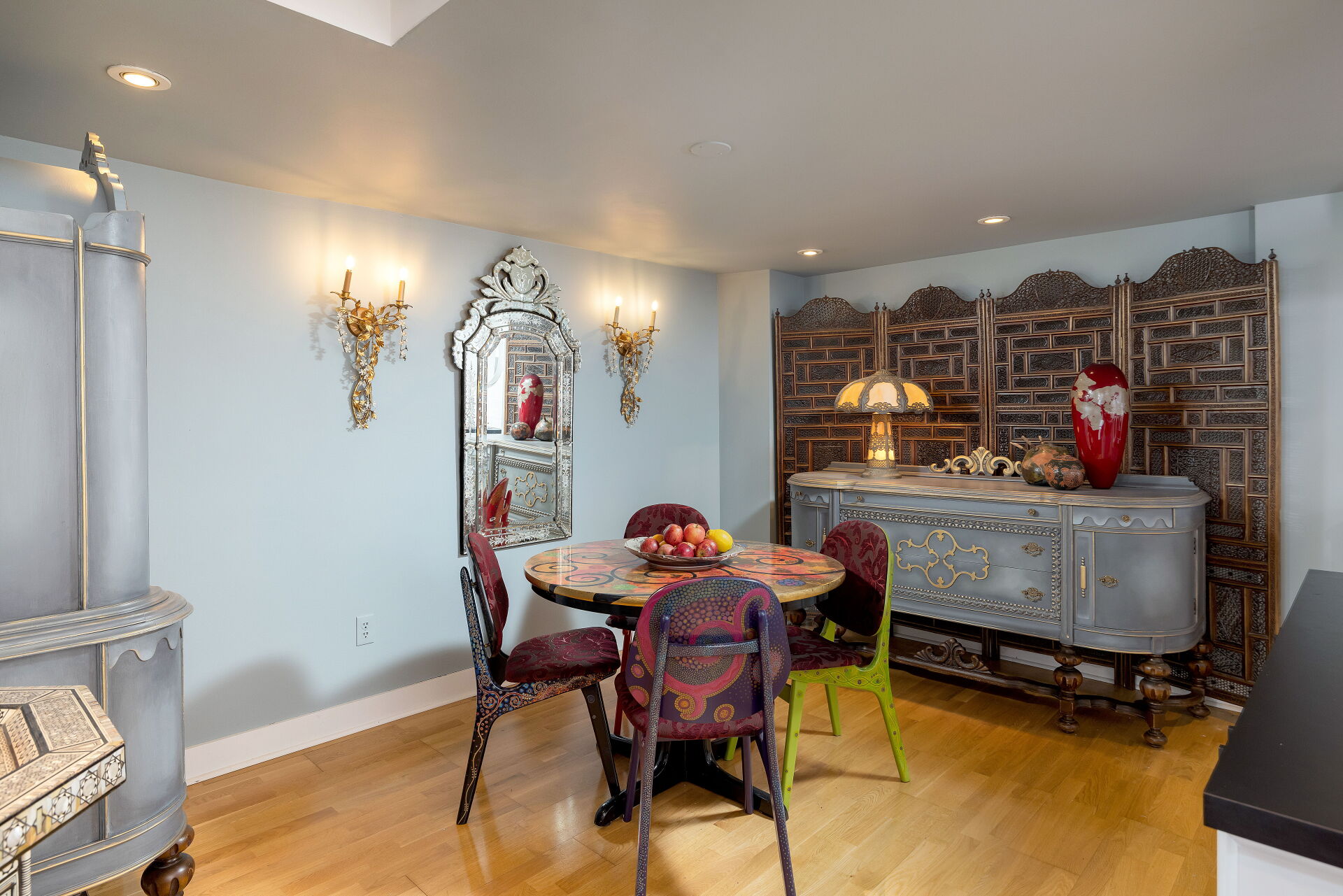 Upstairs in the loft, there’s a massive traditional Chinese bed: 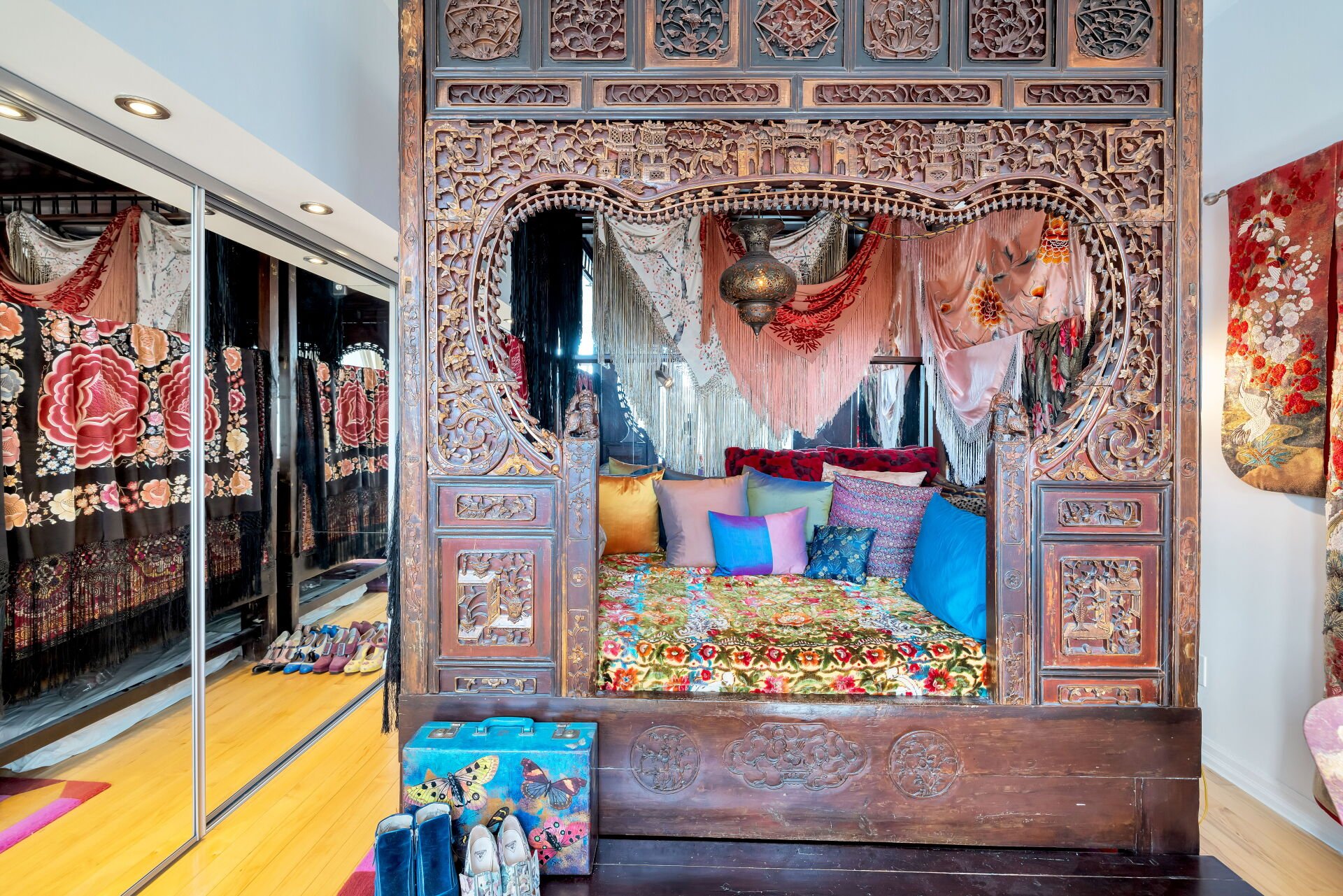 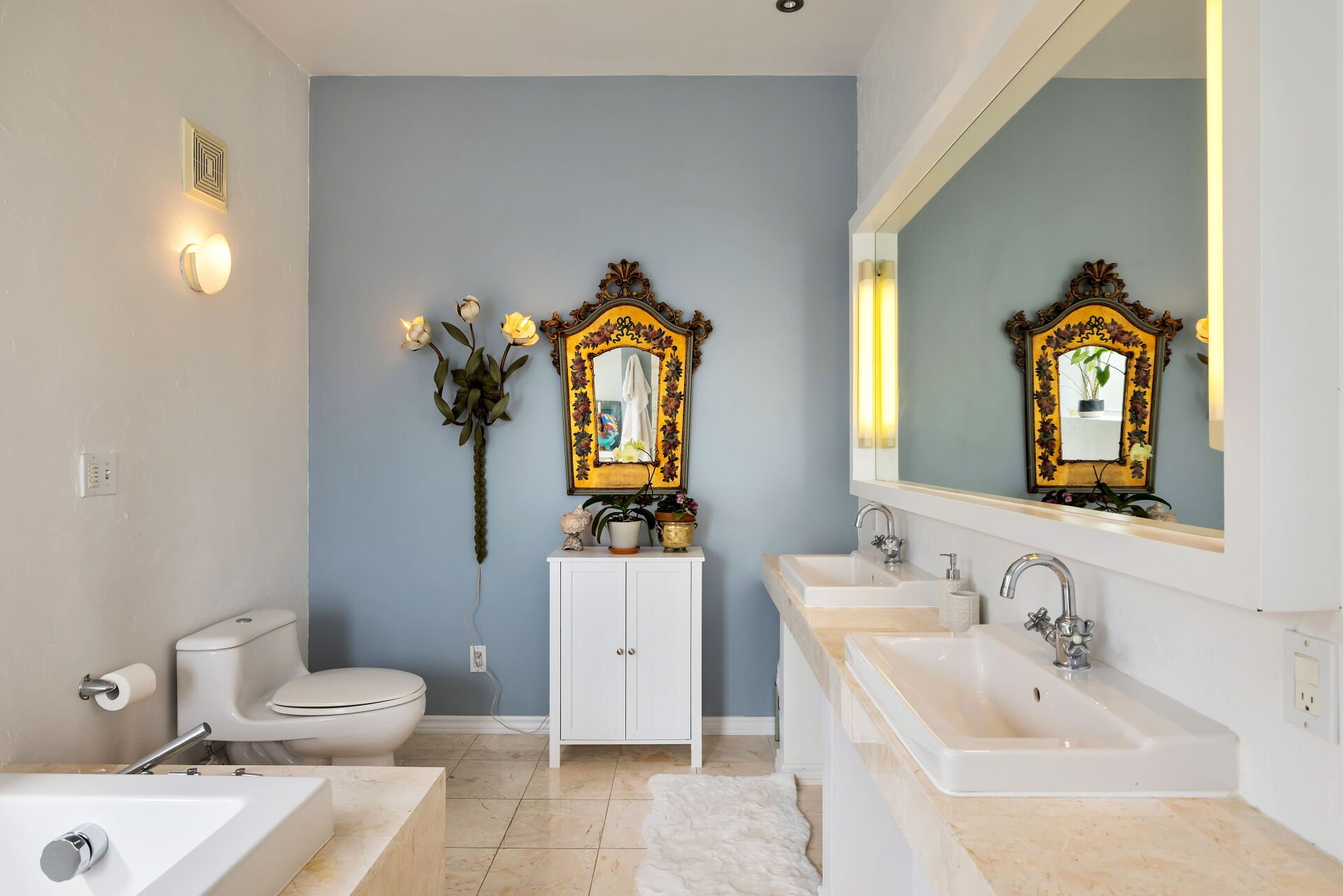 The approximately 650-square-foot rooftop patio has a miniature garden: 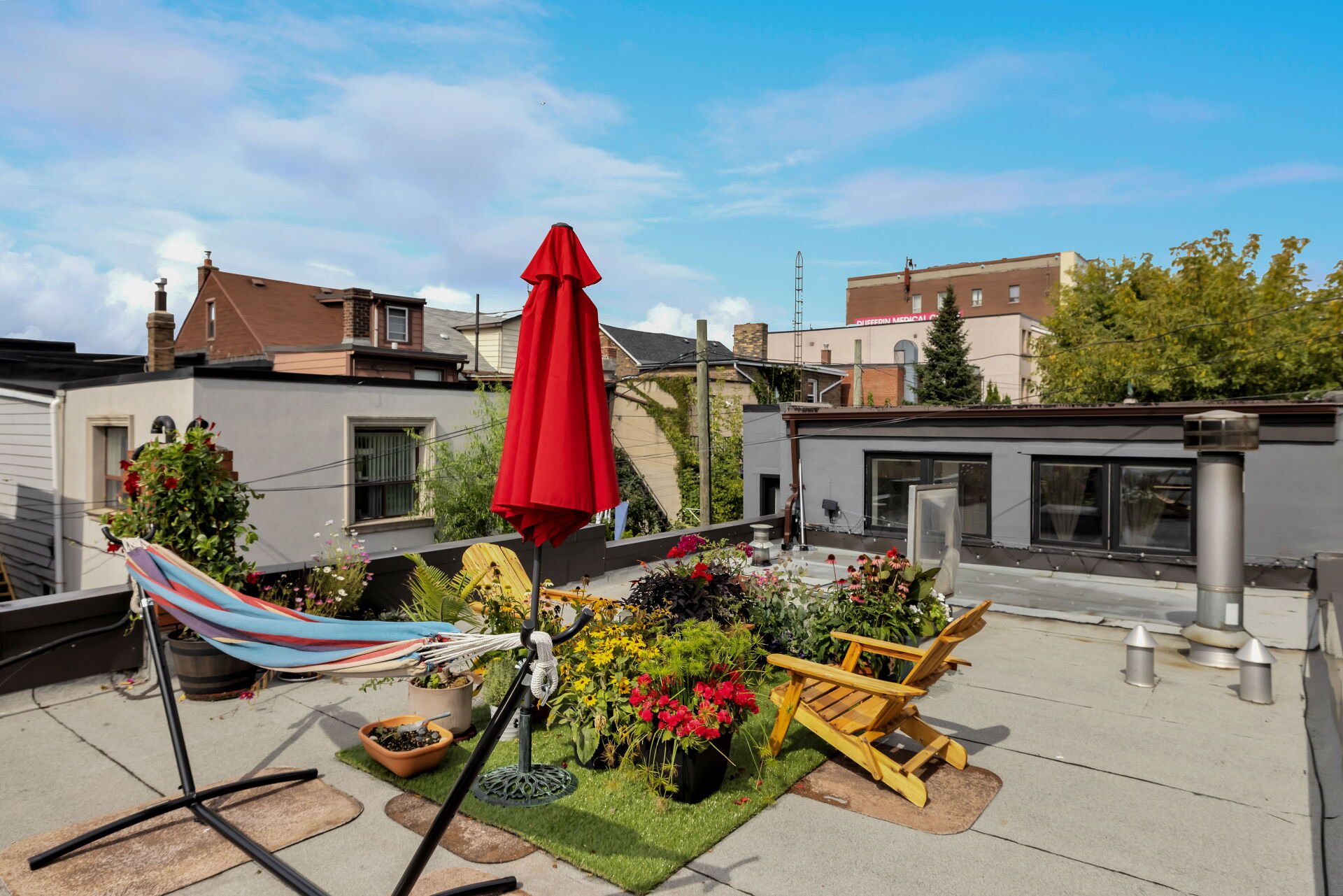 In the finished basement, there’s a rec room with engineered hardwood floors and recessed LED lights: 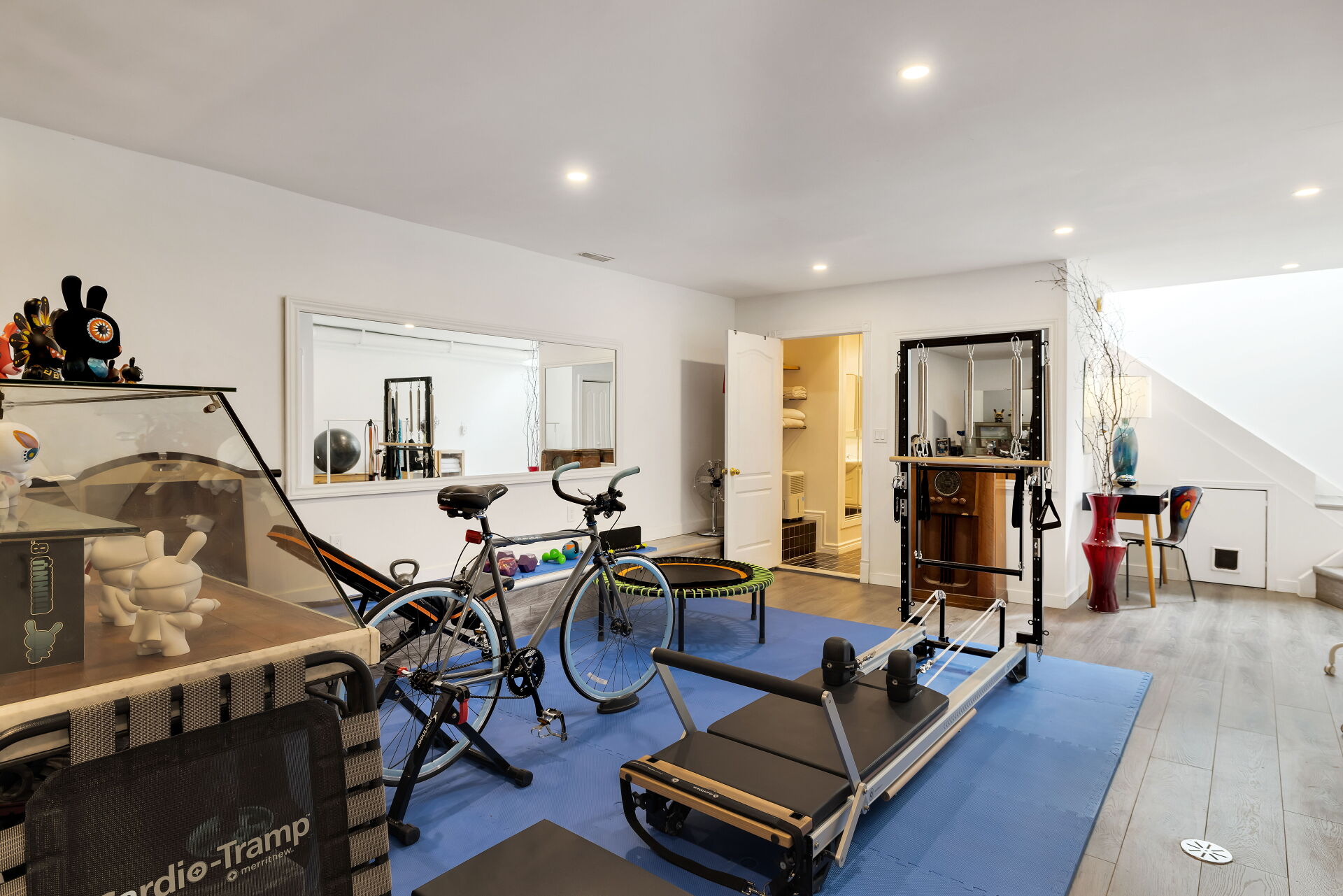 Located next to the rec room, this three-piece bathroom is one of two bathrooms in the basement: 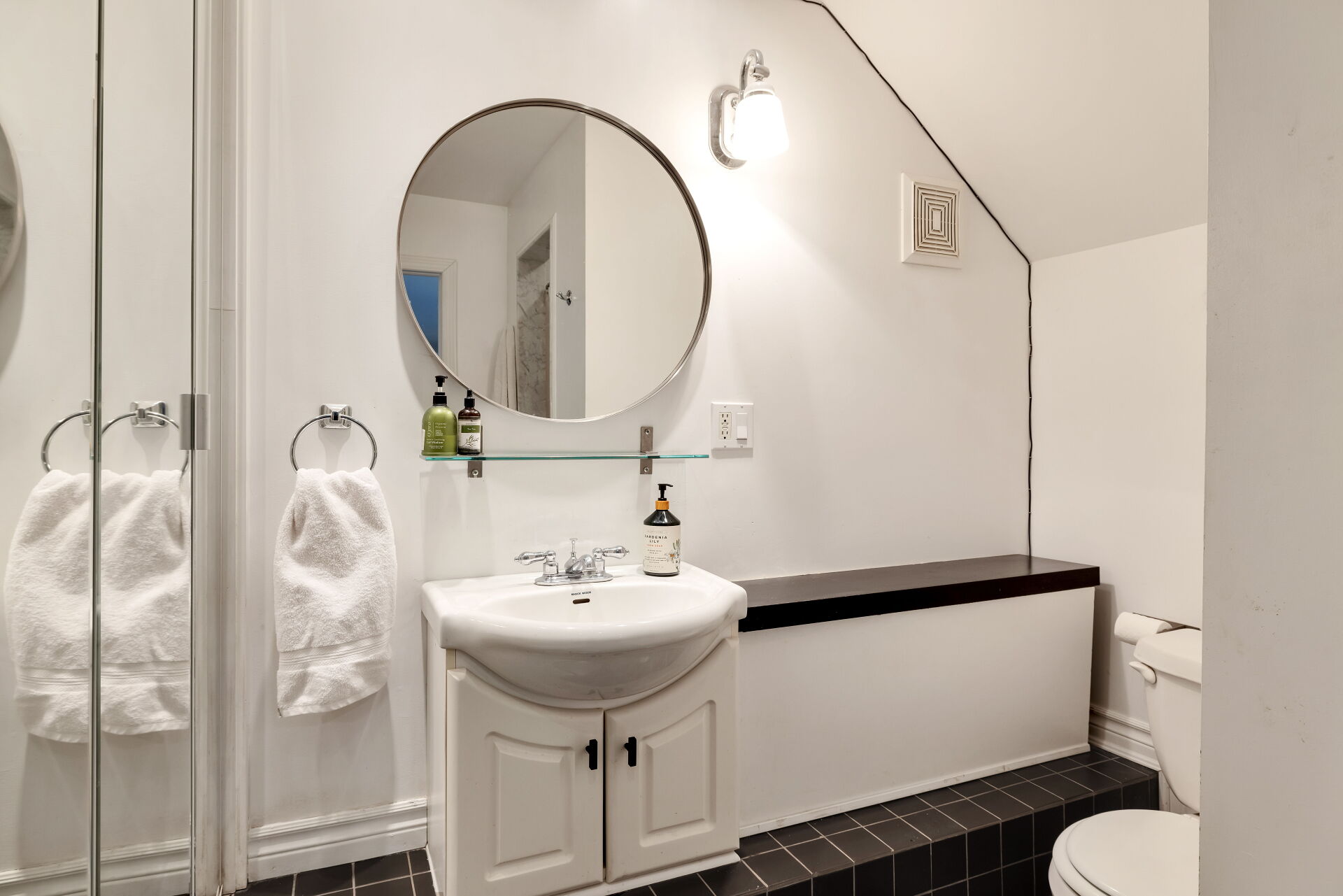 The basement also contains this family room, which has another hand-painted wall mural: 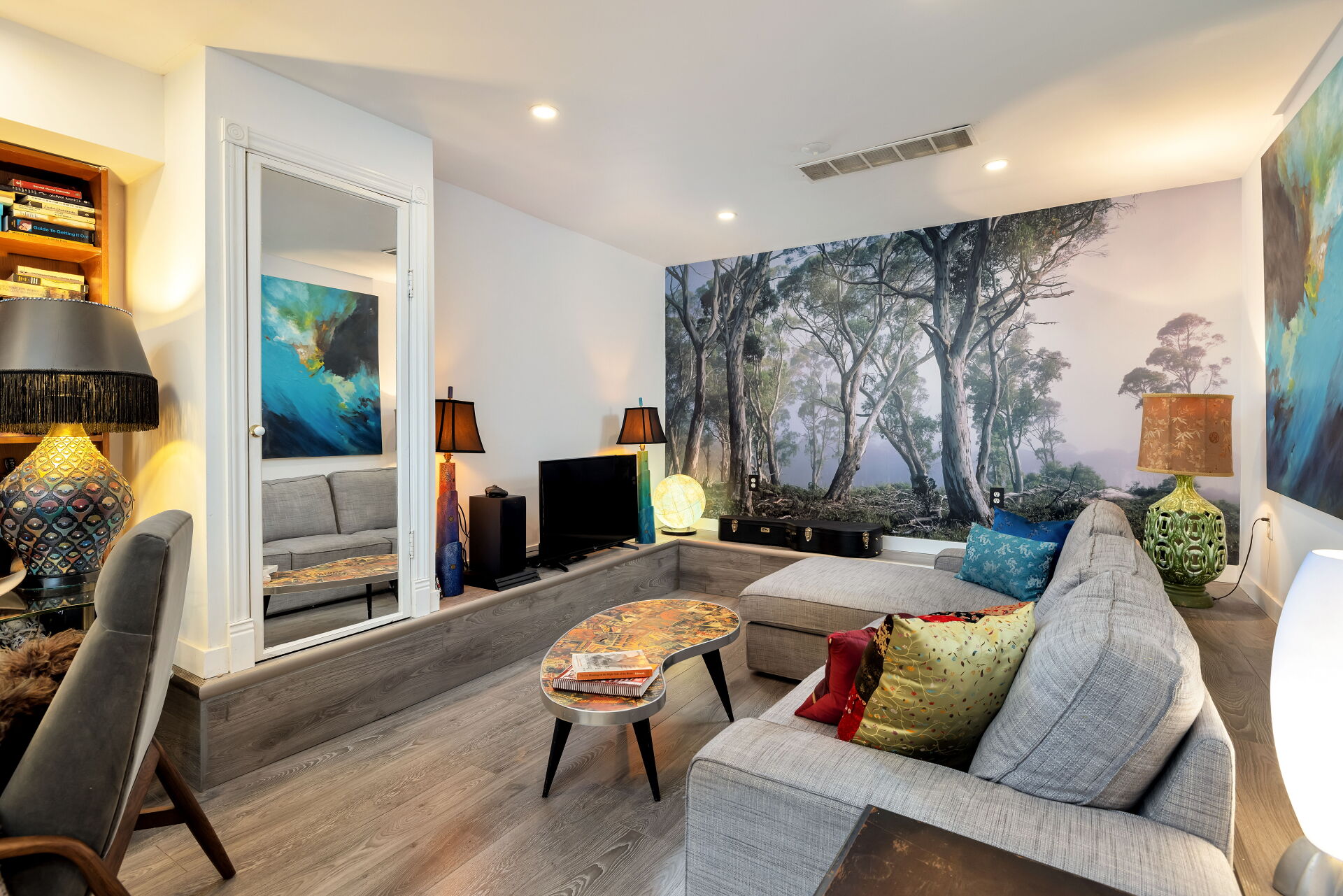 Business in the front, living in the back. The residential and commercial designation make this the perfect place for anyone dreaming of opening a business in their home (the commute would be effortless).