During the pandemic, most people making real estate moves are ditching the city for bigger properties. The Williams family did the exact opposite 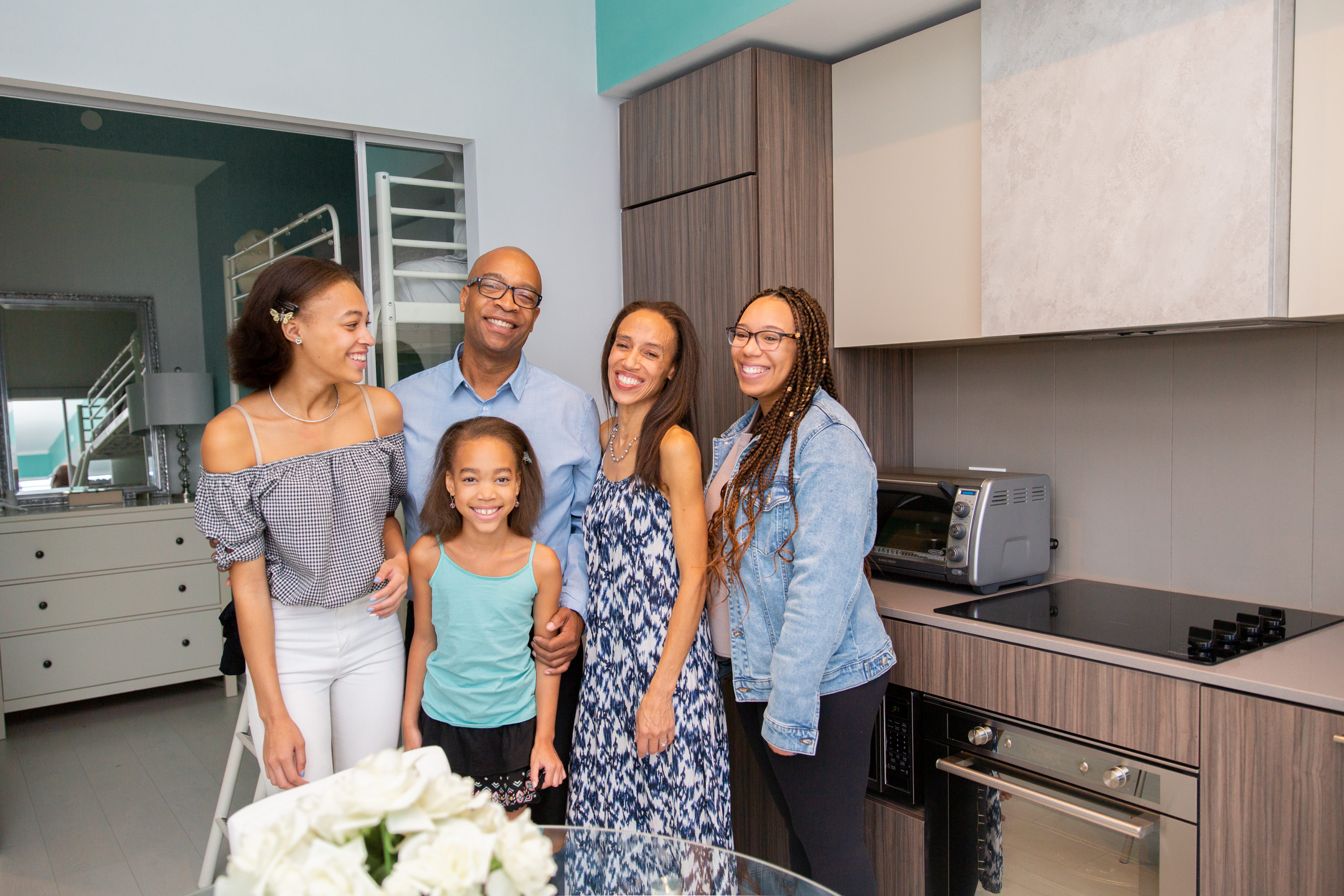 Who: Andrea Peart-Williams, 49, co-owner of KEAN Group, a real estate investment firm, and Dean Williams, 49, a BMW technician, with their daughters, Kristienne, 17, Ariana, 8, and Tenishia, 27 (left to right)

The history: After getting married in 2003, Andrea and Dean bought a brand-new 3,100-square-foot house—with a separate two-bedroom basement unit—in Brampton, for $305,000. They moved in with nine-year-old Tenishia, Andrea’s daughter from a previous relationship. Their first daughter together, Kristienne, was born later that year. In 2006, Dean and Andrea started using their savings to invest in real estate. At the time, Andrea was working as a teacher in the Peel District. Over the years, the couple acquired other properties, including places in Brampton, Cambridge and London, all of which they converted into rentals. To earn some extra income, they also rented out their two-bedroom basement unit for $850 a month. Andrea and Dean’s 10-property portfolio is now worth $9.5 million and generates $35,000 in monthly income.

In 2017, Andrea and Dean had built enough capital from their earlier investments to wade into the Toronto market. They bought two pre-construction condos near the waterfront—a two-bed, two-bath in Liberty Village for $662,000 and a one-bed, two–bath in Swansea for $515,000. The Liberty Village condo was slated for completion in April 2020, and Andrea and Dean planned to rent it out immediately. Dean, who grew up in Scarborough, envisioned the Swansea condo, which was scheduled for completion before 2021, as a potential secondary home, where they could move to after Kristienne and Ariana went off to university. That way, he could be closer to his family in Toronto.

The move: When the pandemic hit, construction on their Liberty Village condo was delayed, with completion rescheduled for fall 2020. The opening of their Swansea condo got pushed back even further, to 2022. At the same time, Tenishia, who lived with the family at their Brampton home, decided it was time to strike out on her own. The family set her up in the basement unit of one of their Brampton investment properties.

In May, after Tenishia officially left the house, the rest of the Williamses discussed making a move of their own—to the Liberty Village condo. Dean wanted to have his extended family nearby during the pandemic. For Kristienne (a model) and Ariana (an actor), living downtown would put them closer to most of their shoots. Ariana was a regular on the filmed-in-Toronto Netflix fantasy drama Shadowhunters.

Although the Liberty Village condo was only 711 square feet, a major downsize from their 3,100 square foot Brampton home, the Williamses knew the den could function as a third bedroom, giving each of the girls their own space. Plus, Andrea and Dean were planning to downsize in the near future anyway—the pandemic and condo completion merely moved up their timeline. At first, Kristienne was apprehensive about switching schools for her final year of high school, but since the family had opted into online learning for the rest of the year, she figured the transition would be slightly less daunting. The girls were also excited about the opportunity to make new friends and spend more time with Dean’s side of the family.

The Williamses had other pandemic-related concerns, too. Like being forced to share an elevator and a lobby with other building residents. But they’d survived a significant uptick of positive cases in Brampton and thought downtown Toronto might actually be an improvement. Besides, they were already staying vigilant, using hand sanitizer and wearing masks whenever they were outdoors.

Andrea and Dean made arrangements with the bank to have their mortgage ready for a move on September 1, one day after their unit’s scheduled completion date. They also listed the five-bedroom main space of their Brampton home as a rental, for $3,000 a month. A local family quickly snapped it up. On September 8, the Williamses finally moved into their new home.

The outcome: As part of the downsizing, the Williams left the bulk of their furniture and bedding in storage, bringing only clothing and other essentials. Andrea and Dean bought new beds and furniture, items that would fit into the smaller space, but so far, only the mattresses have been delivered, owing to Covid delays.

In the meantime, Andrea grabbed a foldout table from their storage unit, which now functions as their dining table, while a mattress is being used as a temporary couch in the living room. Andrea, who has been working remotely, couldn’t fit her home office desk in her new workspace, so she found a smaller one on Facebook Marketplace. Dean is an essential worker since he works in transportation services, and has been working primarily from his BMW dealership at Bathurst and Steeles.

Living in such close quarters presented new challenges for the Williamses. The girls bicker more than usual, and family members often have to squeeze past one another. Despite those issues, the family spends more quality time together than ever before. They also enjoy living so close to shops, parks and the waterfront, especially compared to the long car trips that were necessary in Brampton. On the family’s post-pandemic to-do list: visits to Ontario Place and the CN Tower.

Andrea introduced herself to a few neighbours on their floor, but the family keep to themselves otherwise. They were hoping to host Andrea’s 50th birthday party with friends and family before the end of the year, but will settle for a smaller celebration with relatives in their bubble. The Williamses intend to stay in Liberty Village for the foreseeable future.