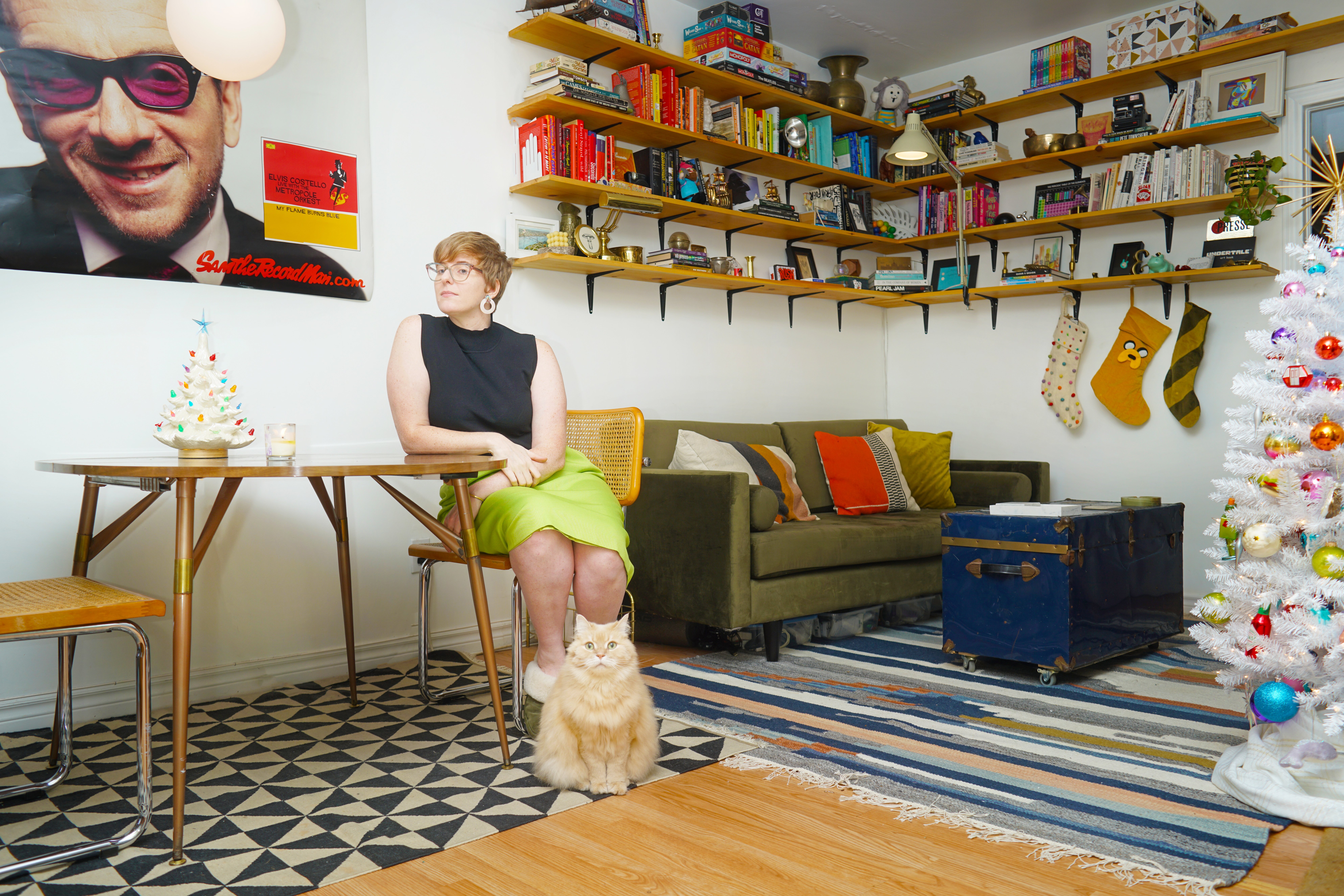 The renters: Nat Manzocco, a copywriter at Acid League, and Will Cabana-Marshall, a sound recordist for film and television.

The project: A one-bedroom plus den in East Chinatown.

Nat Manzocco and her husband, Will Cabana-Marshall, moved into their new rental in February 2021 after escaping what Manzocco calls “the neighbour from hell.” They had endured screaming, stomping and radio blaring at all hours of the night in their previous one-bedroom in East York before making the snap decision to take over a friend’s lease in search of a peaceful night’s sleep.

Not only was their new apartment quieter, it was also a better deal. At $1,600 a month, it cost the same as their old place but with much more space—660 square feet compared with 420—and in a location they both preferred. The only problem? It was ugly. “You know how some people say apartments have good bones? This one had osteoporosis,” Manzocco says.

A long-time fan of quirky light-filled European lofts, she realized that, if she wanted to have the apartment of her dreams, she was going to have to create it for herself. Prior to embarking on her DIY interior-design journey, Manzocco described herself as “crafty” but not necessarily handy—more skilled at making Christmas ornaments for friends than at laying floor tile. But, through sheer desperation and determination, she managed to elevate her reno skills from rookie to maven. “I’ve gone from being scared to use a drill to ‘Let’s caulk this!’”

Shortly after moving in, the couple decided to install wrap-around shelves in the living room, perfect for displaying their collection of quirky objects: a brass crab, a magic 8 ball, a needlepoint of Janelle Monáe and an antique spittoon. After measuring the walls, they purchased brackets and lumber from Home Depot, used a hacksaw to cut the wood and sanded it down in the middle of the apartment. Manzocco prefers the raw, simple look of the shelves to a prefab unit—and the materials only cost about $200. “They’re definitely a little askew,” she says. “Don’t look at them too long.”

Next up was the room in most dire need of repair: the bathroom. Due to an awkward layout, the space between the toilet and the sink was so minimal that, if someone were so inclined, they could rest their head on the sink while sitting on the toilet. Manzocco sourced a smaller sink to make the bathroom more comfortable, and after she explained the problem to the landlord, he agreed to reimburse her for the cost of the sink as well as the labour to install it.

Above the sink was a yellowing plastic medicine cabinet, which she replaced with a sleek mirrored cabinet sourced from the Habitat for Humanity Restore for $150. “I found the exact same one online for twice the price, so I feel like I got a good deal,” Manzocco says. To cover the cracked, uneven floor tiles, she purchased a black-and-white vinyl remnant sheet for $50 from Home Depot and secured it to the floor using double-sided tape—and an X-Acto knife to cut around the toilet, sink and shower.

The apartment’s lighting, from those dreaded “boob light” overhead fixtures, was also suboptimal. One broke shortly after the couple moved in, so Manzocco was able to get the landlord to replace it, but with the other two, she decided to get creative. In the bedroom, she removed the light cover and bought a large lampshade from Value Village ($8) to cover the bare bulb.

In the office, she devised an ingenious light fixture–covering hack that involved two metal IKEA mixing bowls, the result of which looks like something that could be purchased at West Elm. (She had seen similar hacks on interior-design YouTube.) Manzocco painted the bowls white, drilled a hole in the bottom to thread the wires through and affixed them together using a washer. Total cost? $75.

In the summer of 2022, Manzocco embarked on her most ambitious project yet: transforming the sad ’90s vibe of the kitchen into the European loft-style kitchen of her dreams. The finish had worn off the light oak cabinets, the faux granite countertop was chipped in several places, and the beige-pink fake marble floor tiles also bore years of wear and tear. Manzocco sanded down the cabinets and painted them with a black wood stain for a sleek, industrial look. She also painted the cabinet’s laminate sides to match.

She used a $25 sheet of grey concrete finish contact paper to cover the broken countertop and laid black-and-white peel-and-stick tiles on the floor to create a large checkerboard pattern. At $300, the tiles were the most expensive upgrade to the apartment.

The room now reflects Manzocco’s preferred aesthetic, which she describes as a blend of industrial, mid-century modern and “professor of the antiquities whose apartment is full of crazy shit they’ve collected.” The DIY kitchen shelves the couple installed when they first moved in are filled with whimsical finds from thrift and antique shops, like a pear-shaped spice grinder, as well as more sentimental housewares, like Pyrex jars from Cabana-Marshall’s late mother. “It’s gone from being my least favourite room in the house to my favourite,” says Manzocco. 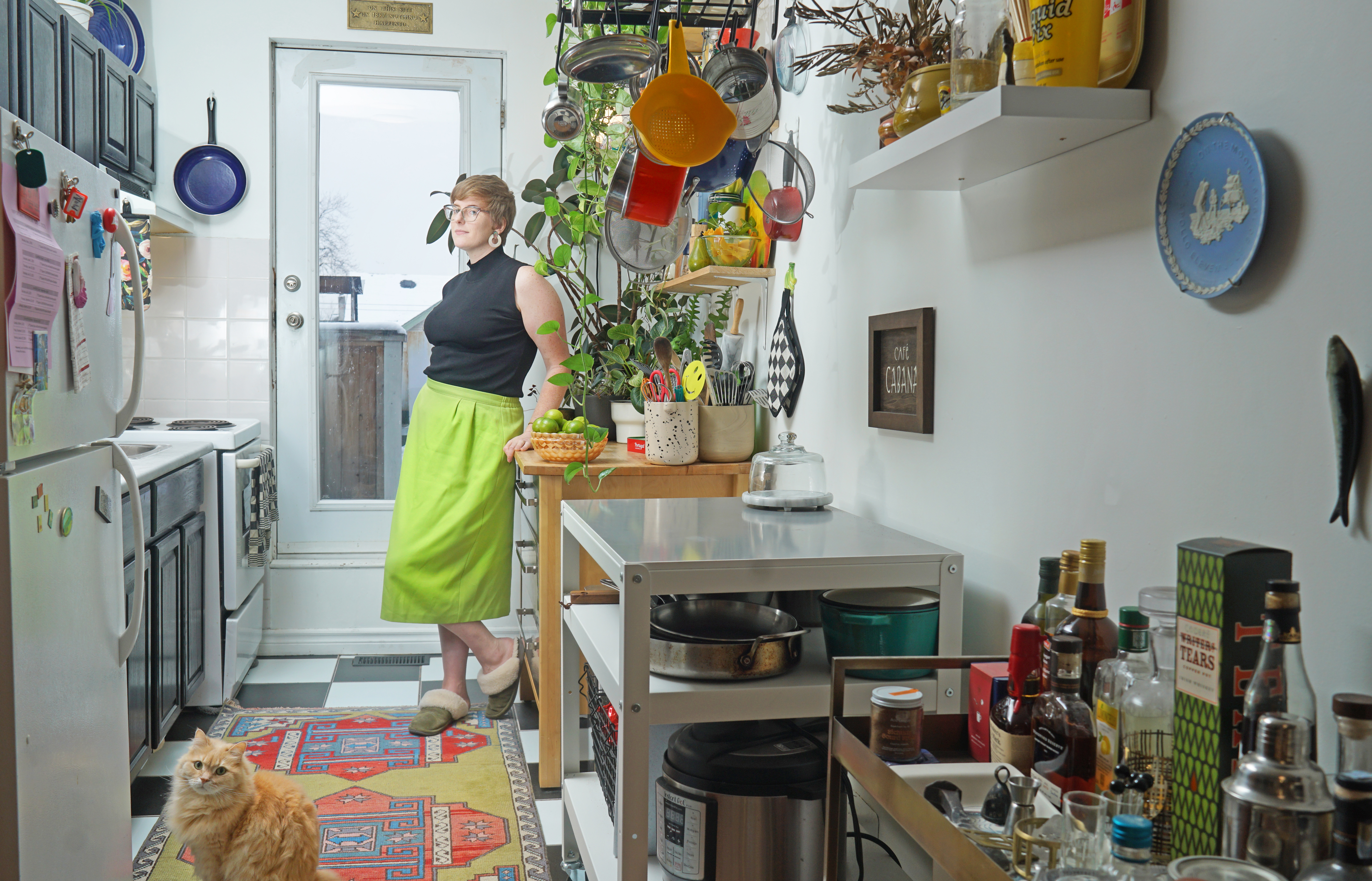 In total, the couple spent roughly $1,000 transforming their space. “People sometimes think it’s weird or not worth it to put money and time into sprucing up a place that someone else owns, but I still have to spend time here,” Manzocco says. “If I were living in an already-renovated property somewhere else in the city, I’d probably be paying an extra $700 or $800 a month. So why not put in a few hundred bucks here and there?”