A Toronto family wanted to move away from the city. They bought this $675,000 home in Nova Scotia

A Toronto family wanted to move away from the city. They bought this $675,000 home in Nova Scotia

The buyers: Dany Waldman, 48, an associate real estate broker with ViewPoint Realty; Gillian Lazanik, 47, owner and principal of Affecting Spaces, an interior design and architecture studio; their son, Jethro, 12; and their daughter, Sean, 11. 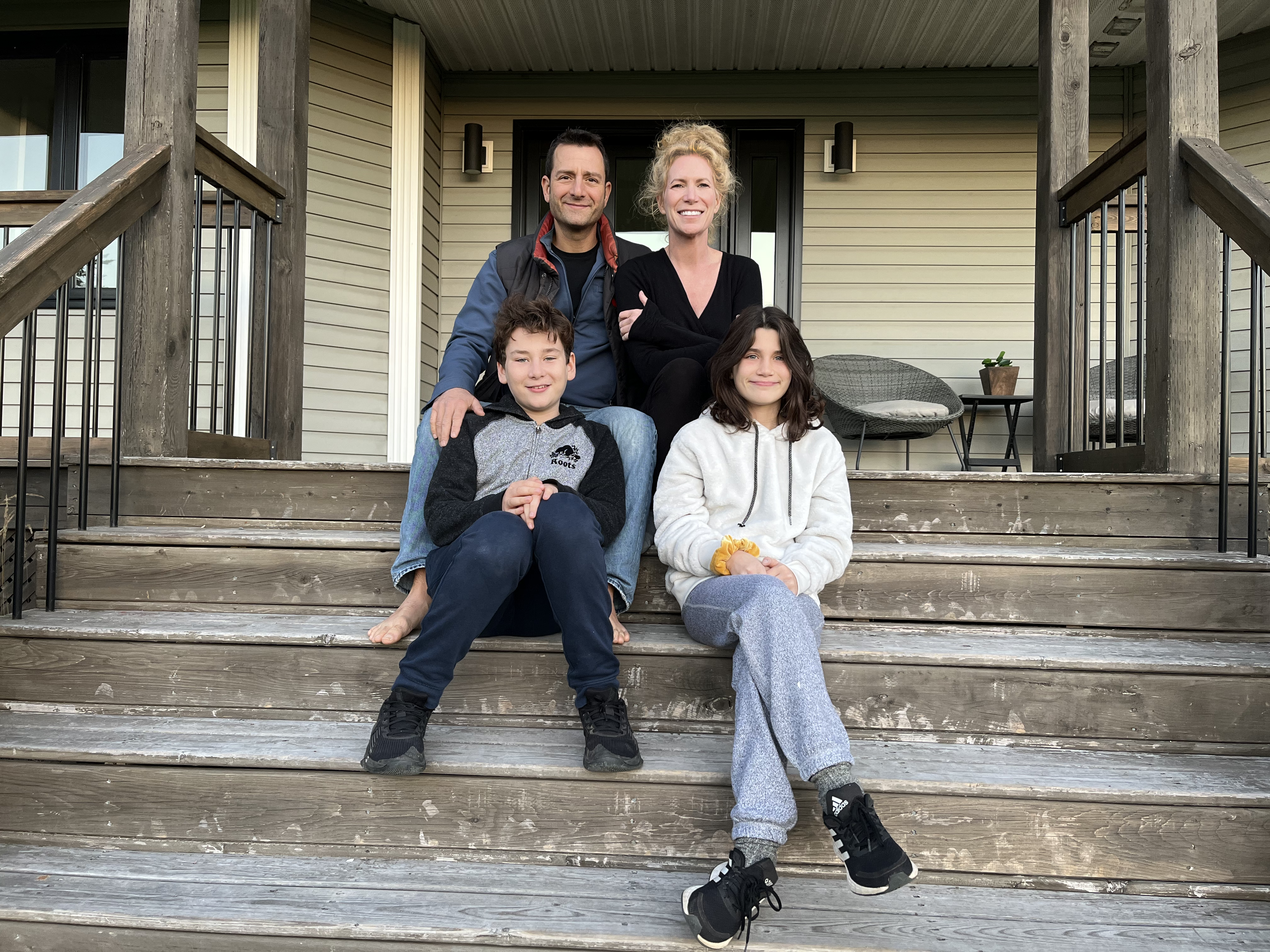 The story: In 2007, Dany and Gillian bought a three-bed, one-bath house at Dupont and Dovercourt. They liked the location, right next to shops and restaurants in the Dovercourt-Wallace Emerson-Junction area.

Dany and Gillian also had a deep appreciation of the outdoors. During the warmer months, the couple would ride their bikes throughout the city or join friends at Dovercourt Park.

But over the years, they began craving a change of pace from their hectic Toronto lives. Dany, then a contractor (he became a realtor in 2013), and Gillian, an interior designer, worked long days, confined to their offices or trapped in traffic jams. They rarely had time to relax or socialize with their equally busy family and friends.

Their desire to leave Toronto increased after their son Jethro was born in 2009, and their daughter Sean the following year. Every year, the family rented a cottage near Tweed, a tiny lakeside community two and a half hours’ drive east of Toronto, where they went hiking and canoeing.

Each time the family returned home, they talked about getting their own place outside of the city, far away from all the congestion and construction. Dany and Gillian wanted their kids to have a deeper connection with nature: aside from those family getaways to Tweed, the kids’ only exposure to green space was their backyard and Toronto parks.

They knew moving away from friends and school would be a big adjustment for Jethro and Sean. At the same time, they were still young enough to adapt and make new friends.

Dany and Gillian were not sure when they should make the move, but the pandemic gave them the motivation to put a plan into motion.

In March 2020, with the world shutting down and the seriousness of the pandemic beginning to sink in, they felt it was safer to leave the city. They decided to sell their Toronto home and move somewhere that was a safe distance from any major urban centres.

Dany and Gillian had spent the past 13 years renovating their home. To cut down on costs, the couple handled the bulk of the work themselves: they updated the bedrooms, bathrooms and kitchen, and also spruced up the back and front yards.

Based on those improvements and the value of recently sold comparable listings in their neighbourhood, they were confident they’d make a decent profit on their home, which they could then spend on a new place.

As they made plans to list their home, they researched where they could live next. They briefly considered British Columbia, specifically Salt Spring Island, located a 90-minute ferry ride west of Vancouver, but it was a little too isolated for their liking. Plus, their family and Gillian’s business were in Ontario.

So they switched their focus to the east coast. Many of their Toronto friends and work colleagues hailed from Nova Scotia and raved about its beautiful landscape and tight-knit communities. They would also frequently talk about their plans to move back there upon retiring.

Dany and Gillian had never been to Nova Scotia before, so they figured it made sense to rent a place there and then purchase something once they’d gotten the lay of the land.

They decided to look for a place on the water so the kids could swim and kayak. They found a three-bedroom rental in the tiny community of Black Point on St. Margaret’s Bay, a 30-minute drive west of Halifax.

That location offered the best of both worlds: they were in the countryside, but the amenities of the city were just a short drive away. The only thing left to do was get there—not an easy feat at the height of the first wave of the pandemic.

The move: After storing some possessions in their basement, the family packed everything else into Gillian’s SUV and loaded it onto a U-Haul trailer hitched to Dany’s pickup. They also crammed two weeks’ worth of food into their vehicles in anticipation of the mandatory 14-day quarantine for anyone coming into Nova Scotia.

On the morning of May 31, with their home staged and ready to be listed, they began the 18-hour drive east. With most Canadians in lockdown, the family zipped down deserted highways as they crossed from Ontario to Quebec to New Brunswick and, finally, into Nova Scotia.

They arrived at their Black Point rental shortly before midnight the following day. Exhausted but relieved, they settled into their temporary home. To their dismay, the floors were rickety and there was a mysterious sewage smell wafting through the place. To make matters worse, they also realized they had a rat infestation. Unable to bring in pest control, Dany took on the rats himself.

But halfway through their quarantine, they got some good news from Toronto: their home had just sold. Even better, they’d more than tripled the value of their home in just 13 years.

Once their quarantine was over, the family was able to enjoy the summer. The family visited a different local beach every day, and Dany and Gillian made a habit of sampling all the craft beers from local microbreweries.

With the sale of their Toronto home closing later that summer, Dany and Gillian could start searching for a permanent home. In their brief stay, they’d grown to appreciate the area east of Halifax, known as the Eastern Shore, and focused their search there.

In July, Dany and Gillian found a promising listing on Kijiji. The four-bed, three-bath home was on Porters Lake, about 30 minutes’ drive east of downtown Halifax. The two-storey house had a typical Nova Scotian exterior with vinyl siding and a grey roof, and sat on a 1.4-acre property with a spectacular view of the lake. 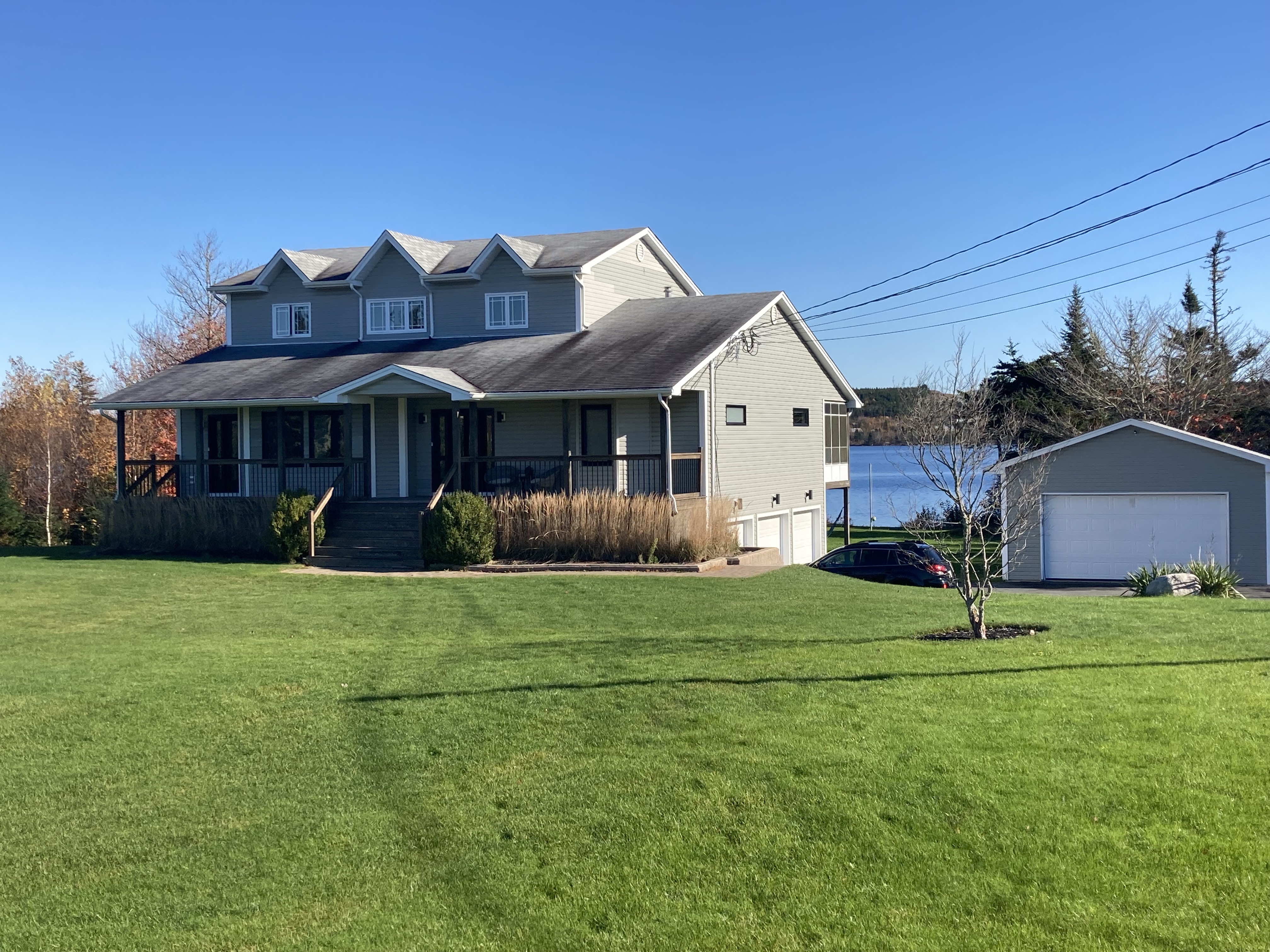 At 4,500 square feet, the home was also nearly three times as big as their place in Toronto. However, it was clear the place required some upgrades.

The windows and doors needed replacing, and the plumbing and electrical had to be relocated to suit the new layout Gillian envisioned for the home. 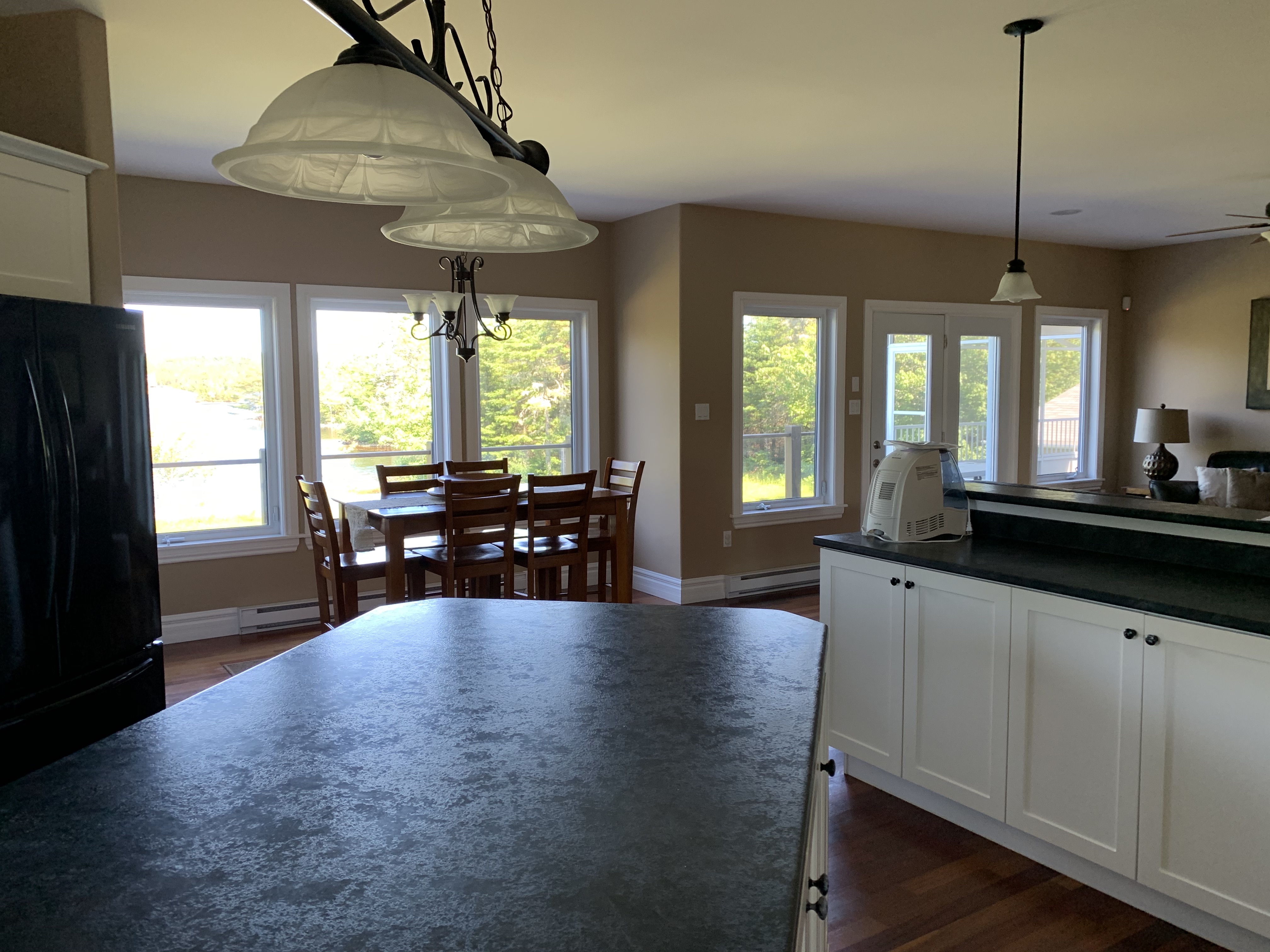 She was also keen on tearing out the old hardwood floors and redesigning the kitchen to bring in as much natural light as possible. 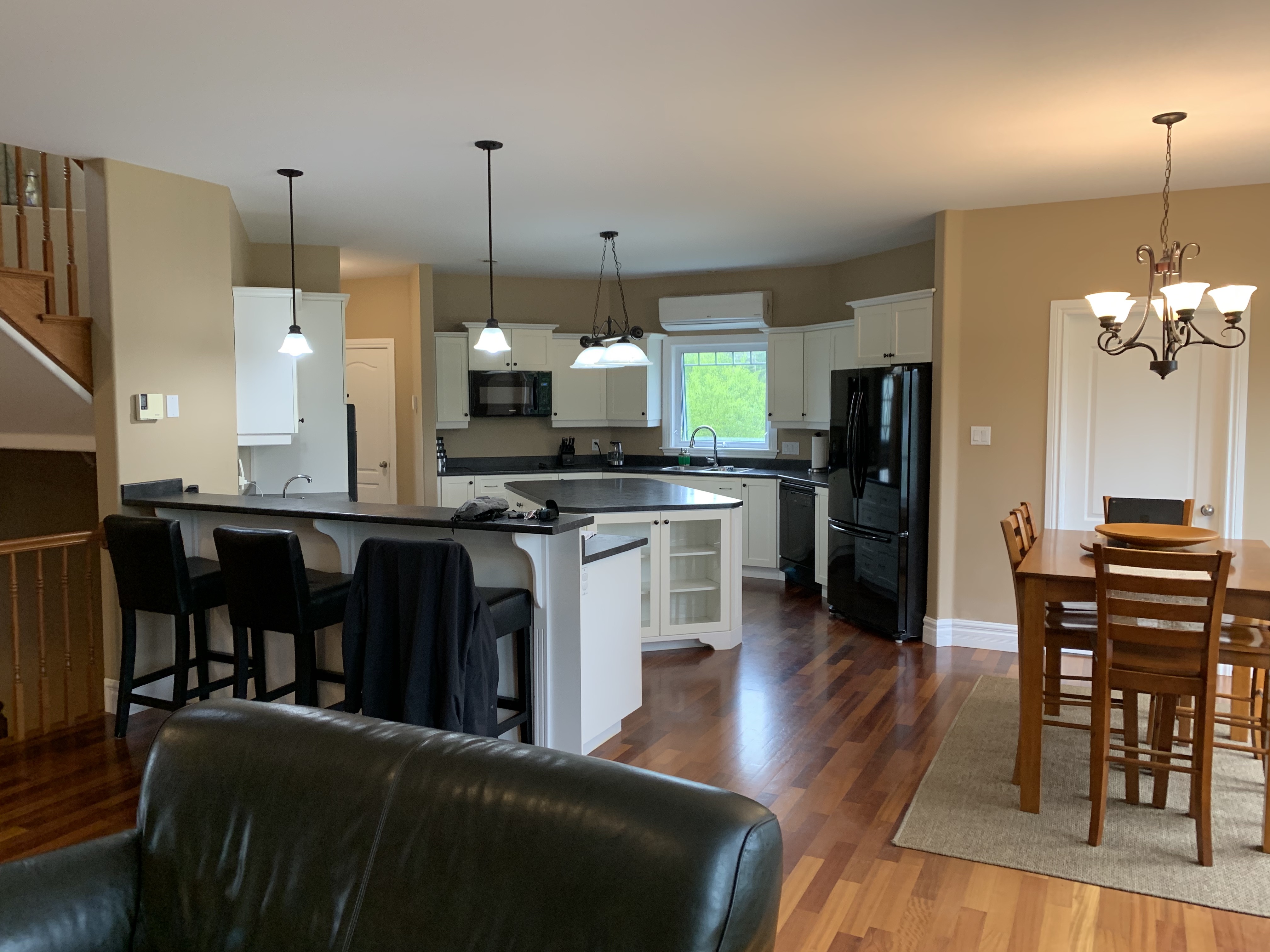 Dany and Gillian had a lot of experience doing this kind of work, so they were up for the challenge. The morning after their viewing, they made an offer. After two days of back-and-forth negotiation, the house was theirs for $675,000. 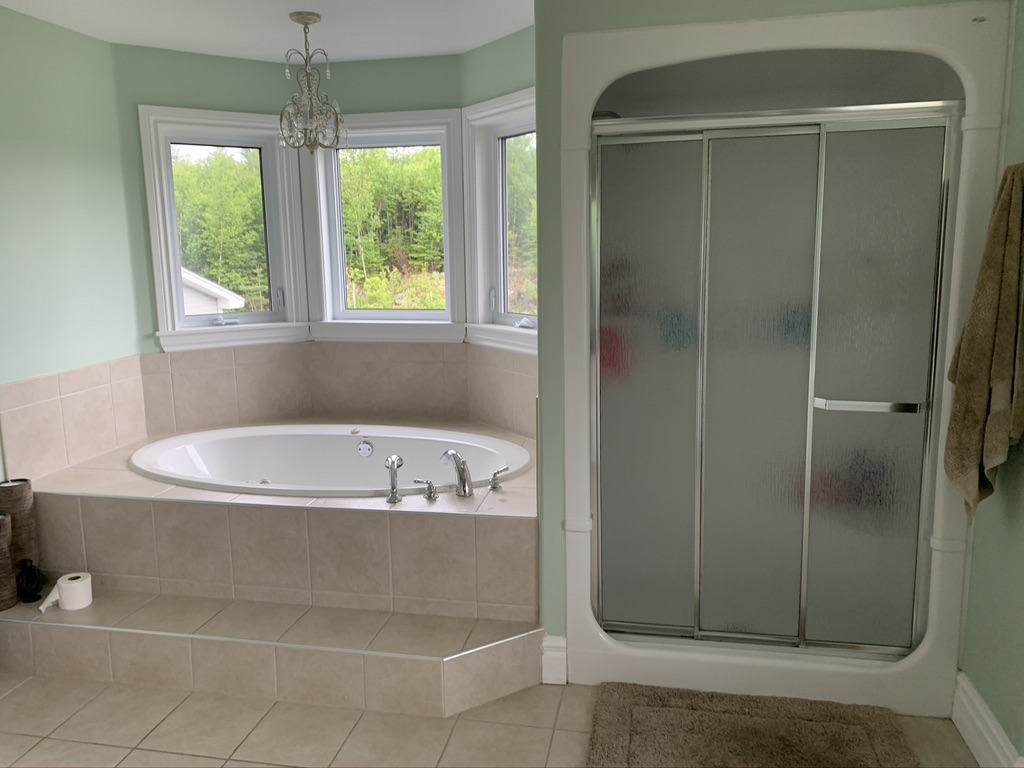 In late August, they moved in and began renovations. Once again, Dany and Gillian took on most of the work. They gutted the main floor and tore out the interior walls. Dany handled the demolition, framing and electrical himself.

Gillian then dramatically opened up the kitchen and added a large kitchen island. Elsewhere on the main level, the windows were enlarged and new doors were installed. Outside, leaky spots in the exterior walls were waterproofed.

The outcome: Dany and Gillian completed renovations this past May. Despite their home being in a constant state of flux during construction, the family seamlessly settled into their new surroundings. In those first few weeks, they were invited by neighbours for dinner on an almost nightly basis.

Since then, they’ve befriended several families who live close by. And contrary to widely held preconceived notions about the cold and dreary Atlantic coast, the family has been pleasantly surprised by the mild winters and warm summers of their new province.

But the best part of the move has been the slower pace of life in Nova Scotia, where Dany and Gillian believe there is more of an emphasis on quality of life outside of work. The family now hosts parties in Gillian’s brand-new kitchen a couple of times a month, something that would have been impossible back in Toronto. 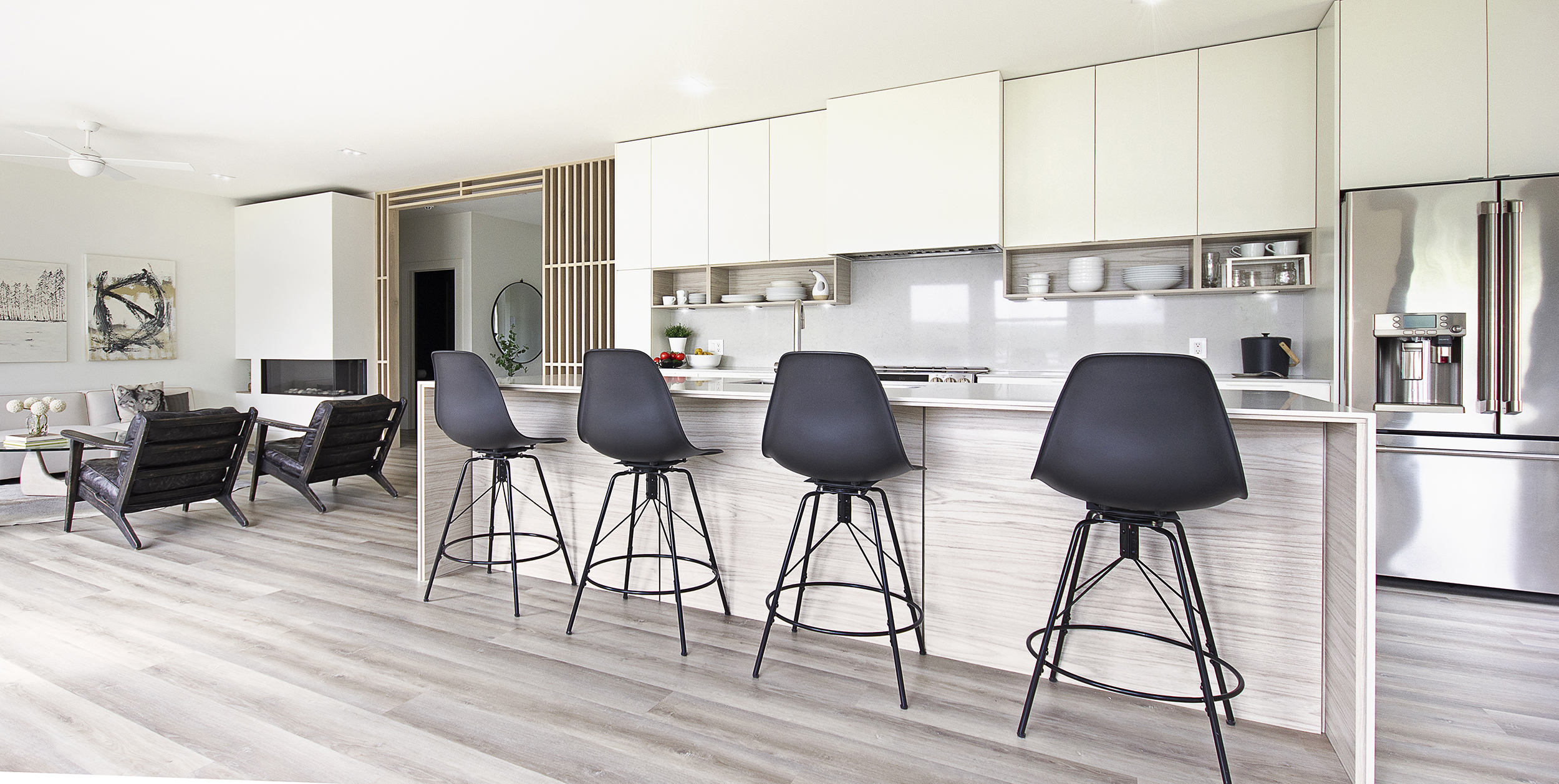 As for Dany, he’s made a habit of taking his motorcycle out for a ride in the scenic countryside, right on his doorstep. In Toronto, he’d have to slog through endless traffic to escape the urban sprawl. 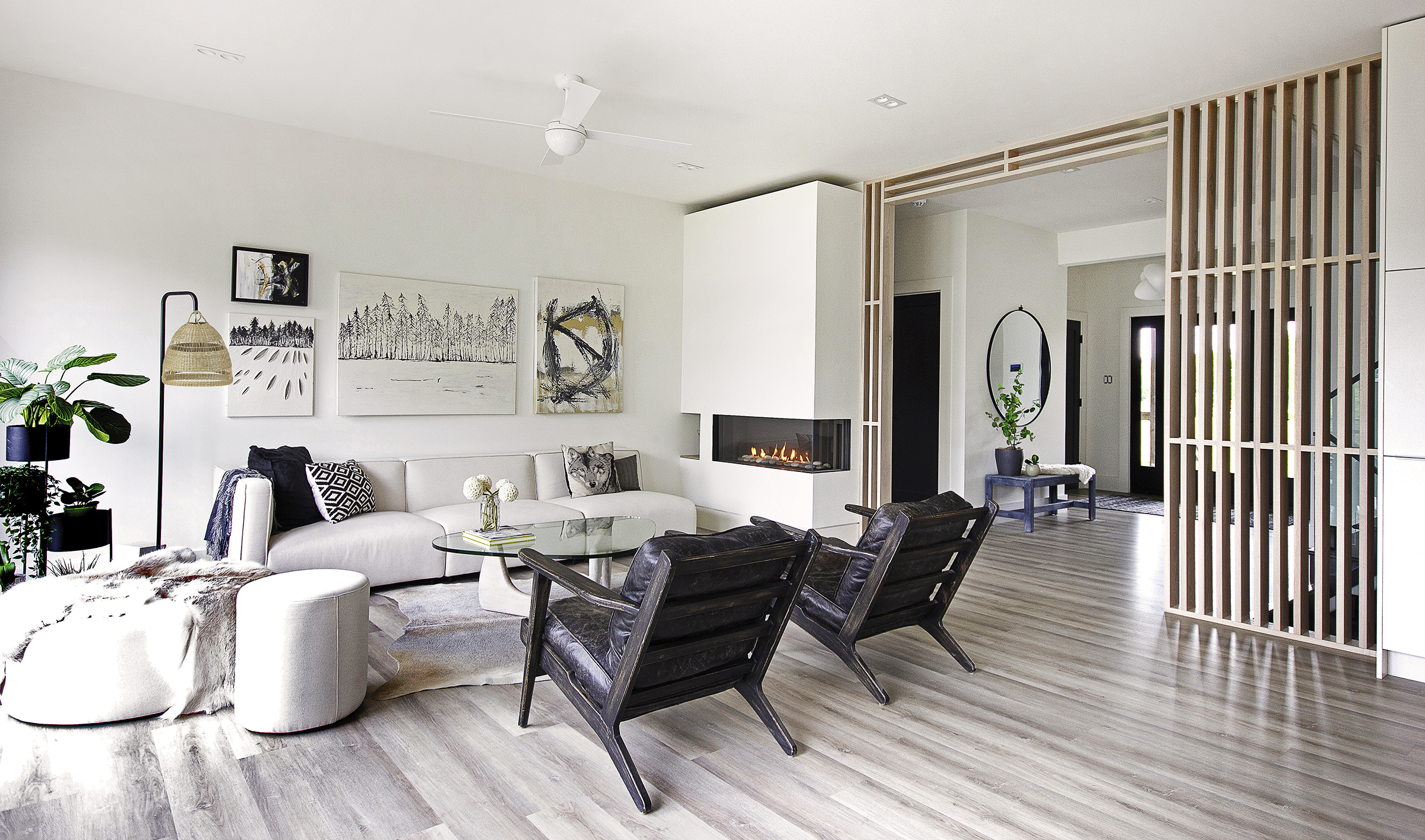 The kids had a successful year in their new school and can often be found outdoors playing with friends in the neighbourhood. Jethro has become so enamoured with paddling that he now wants to become an Olympic paddler, while Sean is taking drama at school and has aspirations of becoming a professional dancer. 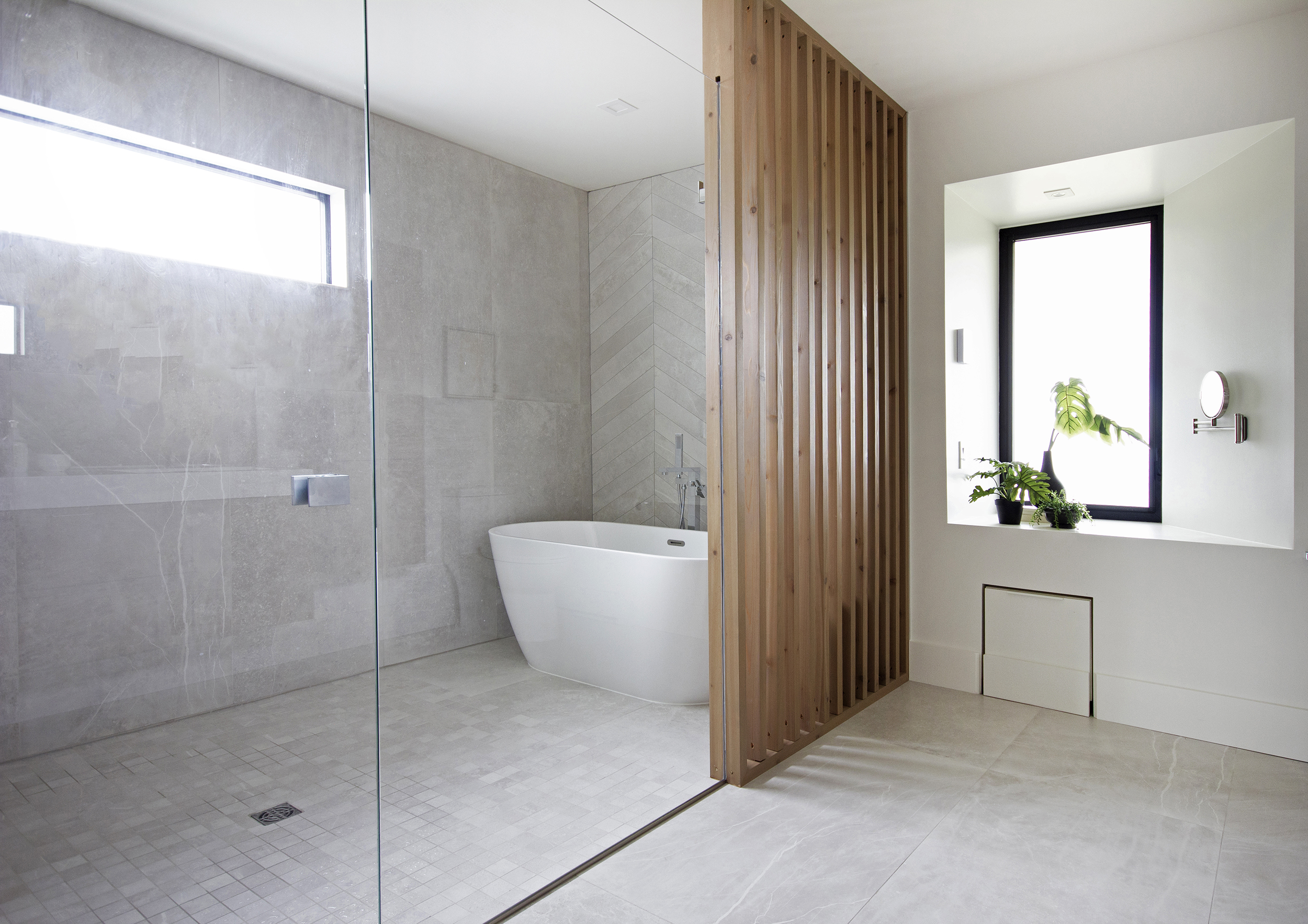 Although the journey was filled with a lot of uncertainty, the family is excited to have begun this new chapter. Gillian now has clients in Ontario and Nova Scotia. Dany has established himself as a realtor in Nova Scotia with ViewPoint Realty. 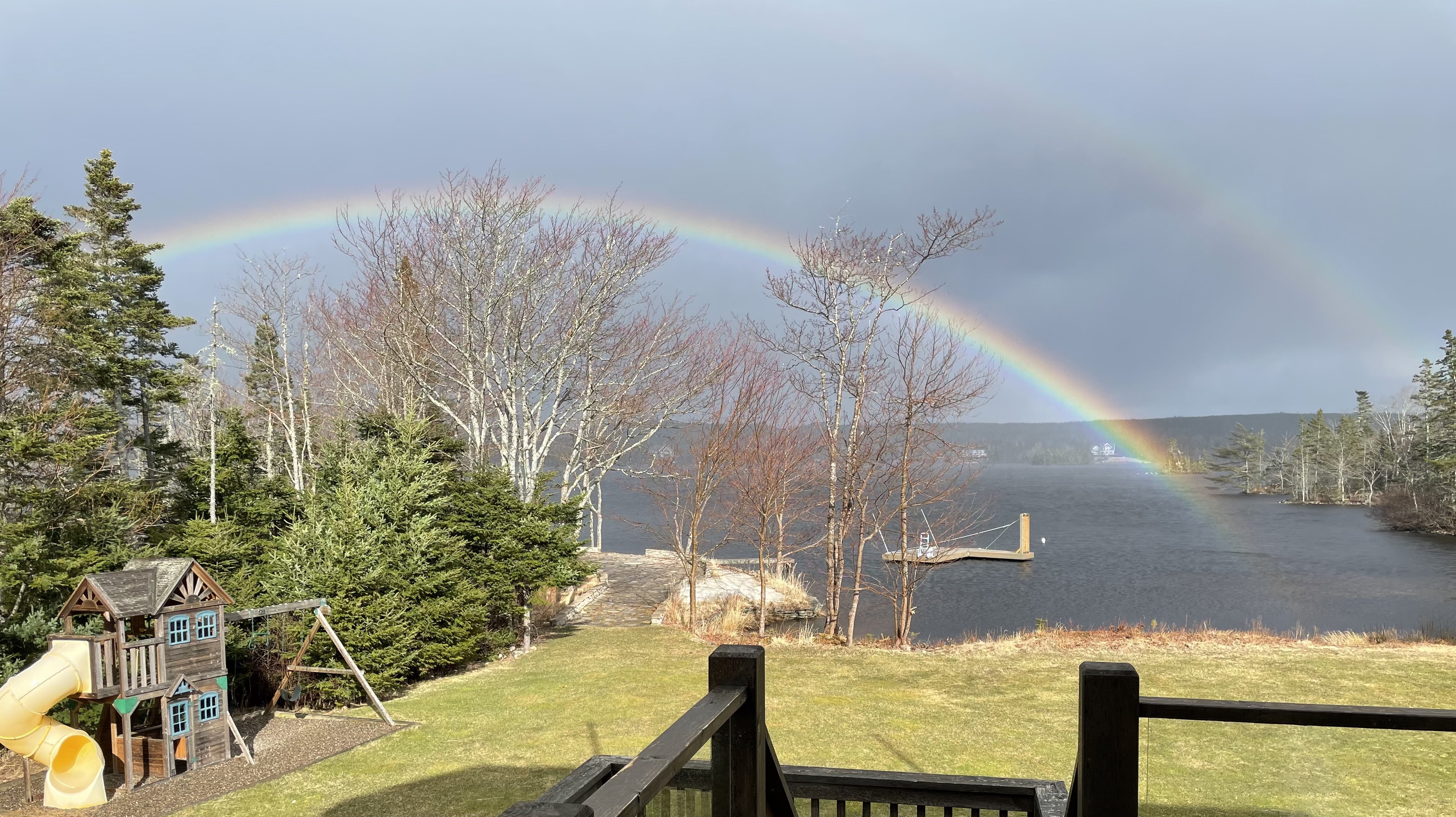 Dany and Gillian hope they can help more families discover what they’ve found in Nova Scotia: a great lifestyle and a connection with their community and nature.

Did you leave Toronto during the pandemic? Maybe you moved to Toronto from a town or city nearby? Wait, did you leave the city and come back? Whatever happened, we’d love to hear about it: realestate@torontolife.com