A Toronto family wanted to escape the city for nature. So they bought an $850,000 converted schoolhouse in East Garafraxa

A Toronto family wanted to escape the city for nature. So they bought an $850,000 converted schoolhouse in East Garafraxa

Who: Ted Clarke, 50, an IT and infrastructure specialist at Soak Wash Inc., a Mississauga-based laundry company; and Jacqueline Sava, 46, the founder of Soak Wash Inc.; with their five-year-old twins, Felix and Stella. 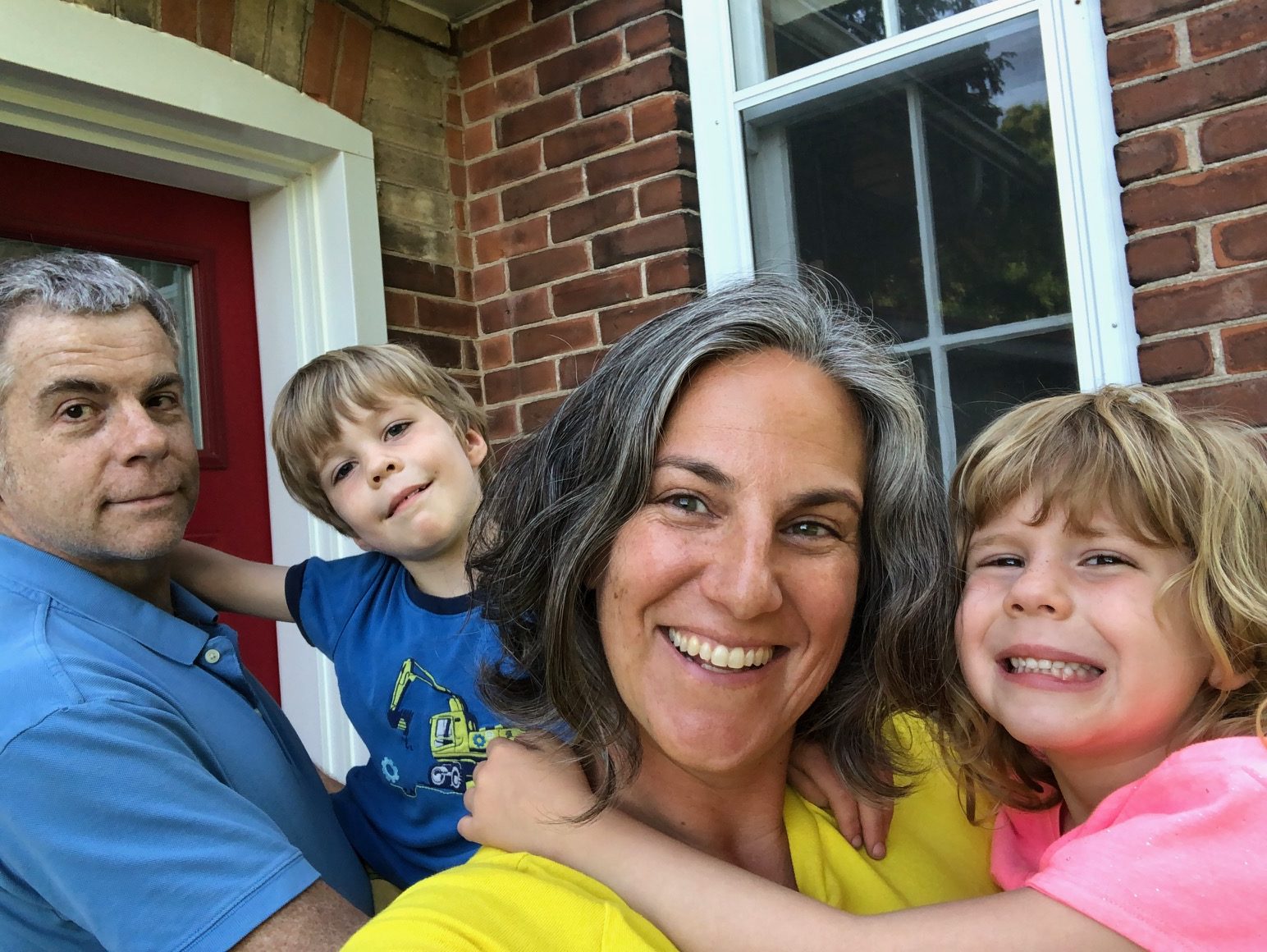 The history: In late 2020, Ted and Jacqueline and their twins were living in a two-bed, one-bath apartment at Arcadia Housing Co-op, down by the waterfront near Bathurst and Queens Quay. The 1,100-square-foot apartment had floor-to-ceiling windows and a spacious south-facing balcony with views of the lake.

They liked their neighbourhood. Jacqueline and Ted, who run their own business, could hop onto the Gardiner for the 30-minute drive to their office in Mississauga. Plus, Stella and Felix’s kindergarten was a quick ferry ride away on the Toronto Islands. Another bonus: their rent was a relatively affordable $1,515 a month.

But the family was ready for change. They appreciated the convenience of their location, but the noisy and crowded streets of downtown Toronto made them want more outdoor space. So they started looking for something outside of the city.

In December, they stumbled upon a listing for a converted schoolhouse in Singhampton, a small community about a two-hour drive northwest of Toronto. Built in 1909, the red-brick schoolhouse was beautifully restored: it had a charming bell tower, and the kitchen cabinets were made from old science lab cupboards. The building also sat on an acre of land.

The family loved the idea of living in a home with character and history, but they balked at the $1.2-million asking price. Jacqueline and Ted knew they wouldn’t be able to afford anything over $1 million. Also, the drive from Singhampton to their Mississauga office seemed impractical.

Jacqueline and Ted didn’t make an offer, but they had an idea: what if they bought a more affordable home with character and history a little closer to Toronto?

The hunt: In January 2021, they set an $850,000 budget and kickstarted their search. They wanted at least an acre of land, no more than a 90-minute drive away from their Mississauga office and Jacqueline’s family in Oakville and Toronto. And they were keen on getting a place with more square footage and at least two bathrooms.

First stop: Mulmur, a township about a 90-minute drive northwest of Toronto. In mid-January, they viewed another converted schoolhouse and a Victorian home with a beautiful maple-lined driveway. However, both places required extensive renovations, which would have pushed their total expenditures far beyond $1 million.

On January 31, their agent, Halyna Zelionka, arranged a viewing of an unlisted two-bed, two-bath converted schoolhouse in East Garafraxa, which was only about an hour’s drive northwest of the city. The moment they drove up to the property, Jacqueline and Ted knew they’d found exactly what they were looking for. 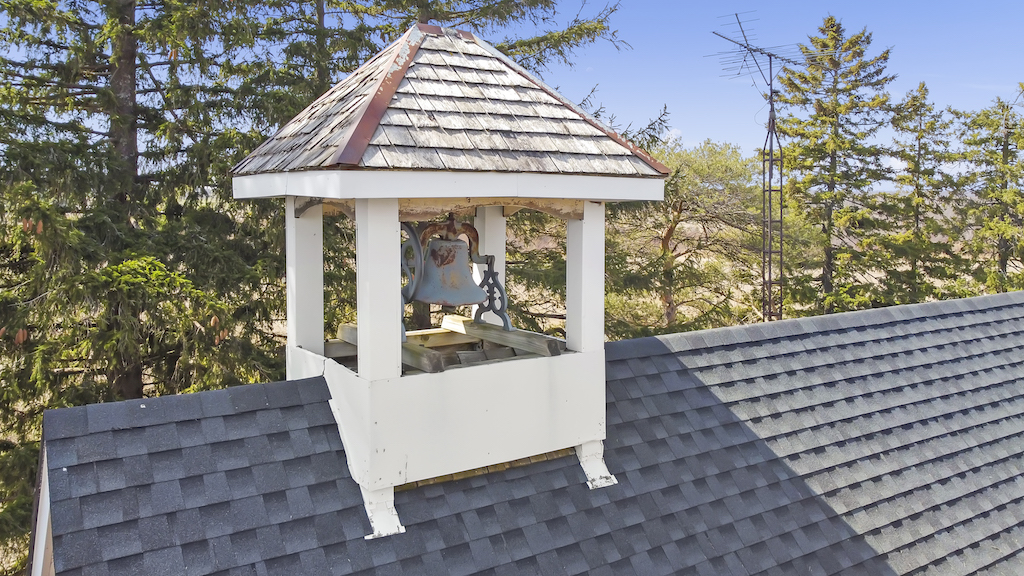 The red-brick schoolhouse had an adorable white bell tower and sat on an acre of land surrounded by serene forests and farmland. 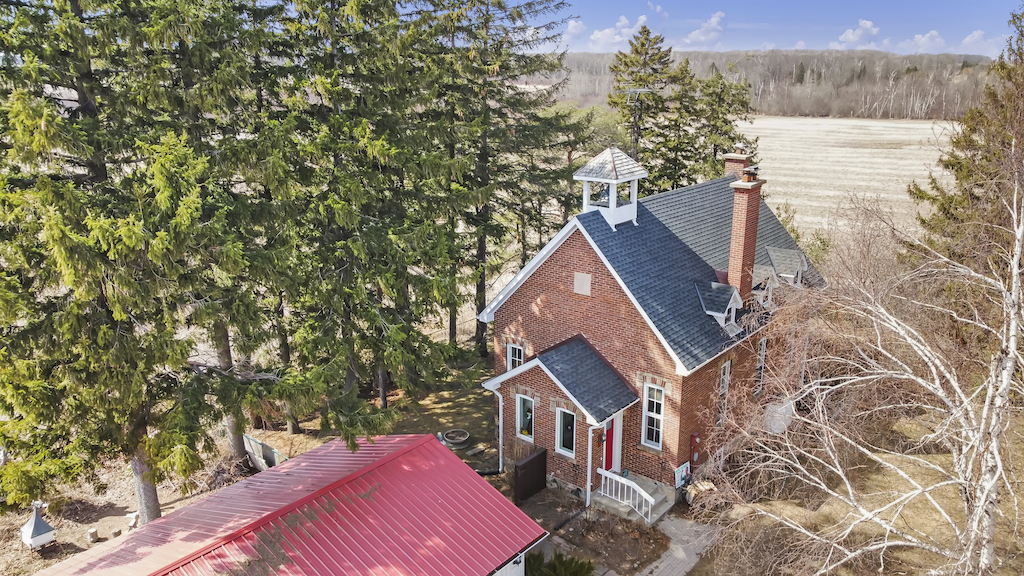 In the back, there was a large patio, perfect for parties and family meals. Inside, it was about 1,700 square feet spread across the basement, the main level and the mezzanine-style partial second level. 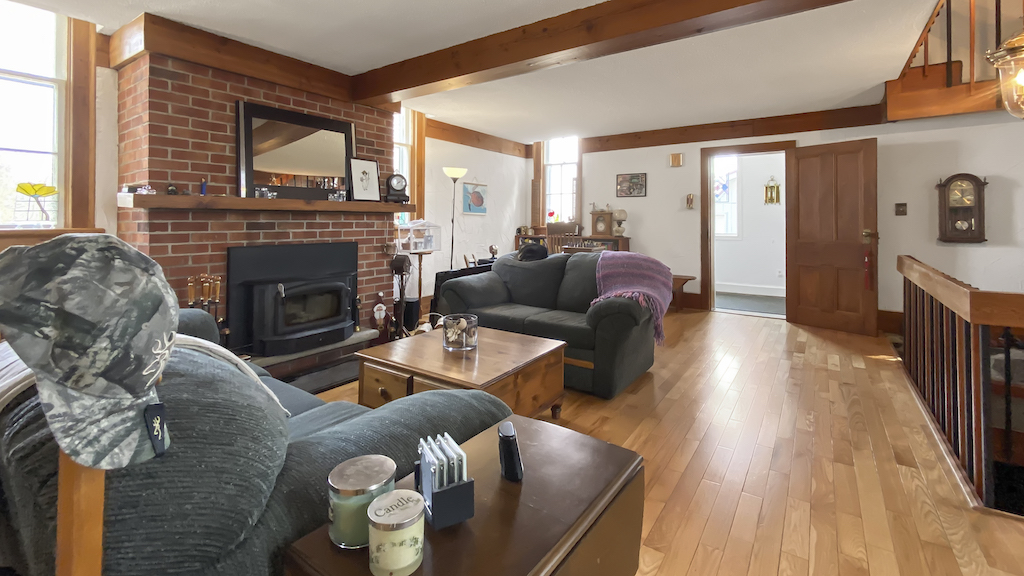 Jacqueline wasn’t a fan of the dated ’90s-era Venetian plaster walls, but she did appreciate that the main level had a separate dining room that would allow for intimate family dinners. 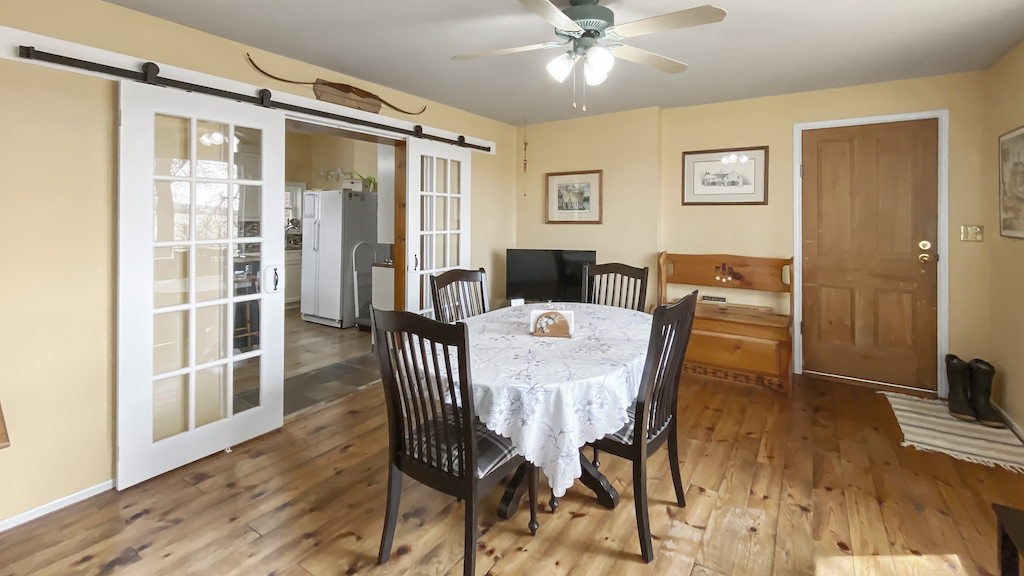 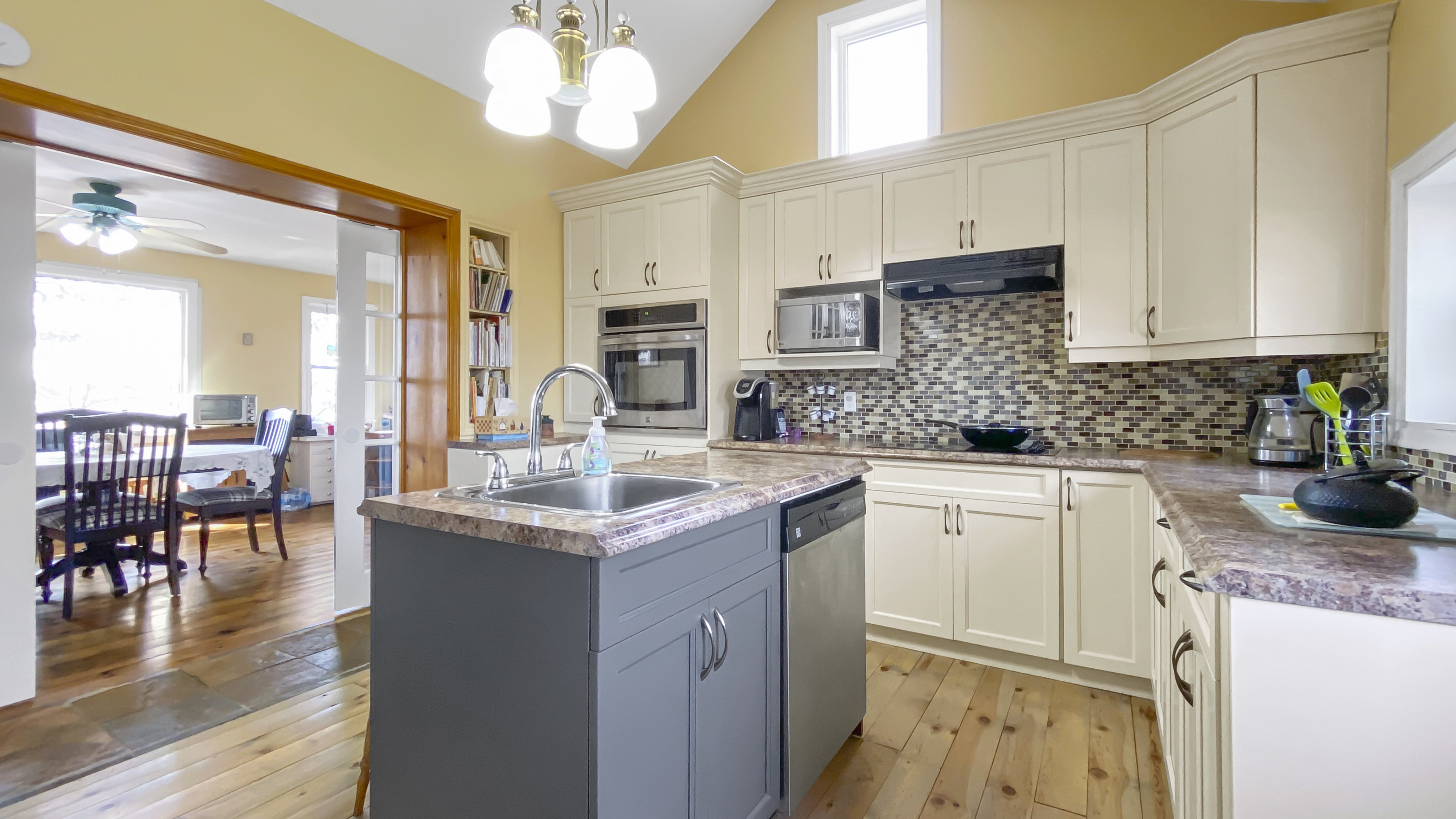 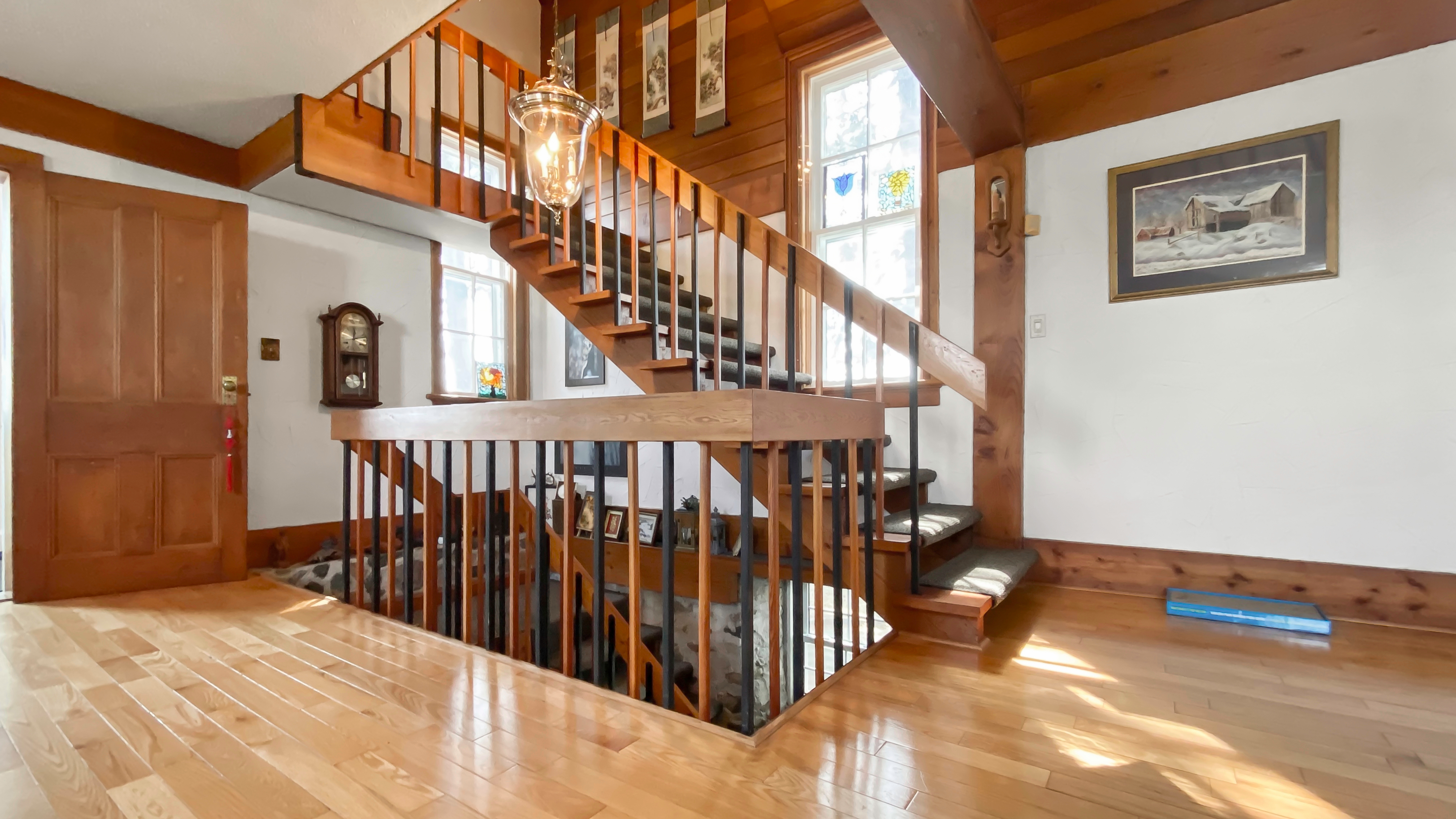 Jacqueline and Ted’s favourite part of the viewing was reading all the inscriptions countless children had scrawled on the brick exterior of the schoolhouse over the years.

Built in 1901, the school had remained operational until the 1960s. It functioned as a rec centre for boy scouts in the 1980s. Then, in 1994, a blacksmith converted it into a house, adding a three-car garage and a workshop.

The current owners kept the property in excellent condition, so no major renovations were necessary. Jacqueline and Ted decided to go for it. On February 4, after a second viewing with Stella and Felix, both parties agreed on a sale price of $850,000.

The outcome: The family took possession of their new home in June. They will remain at their Toronto apartment for the upcoming school year. That way, Felix and Stella can finish kindergarten at their school on the Islands. Over the next year, Jaqueline and Ted will move their belongings to the schoolhouse, before permanently moving out there next summer.

In the meantime, they’ve been spending vacations and most weekends up at the schoolhouse. With the assistance of the twins, Jacqueline has been busy pulling weeds and planting flowers in the garden. The family also befriended their neighbours across the street, a young couple who operate a chicken farm.

The place doesn’t need any structural repairs, but Jacqueline and Ted are now saving up for aesthetic renovations, which they’re planning for later this fall. Having discovered that the attic has 10-foot ceilings, they’ve decided to knock out the attic floors and expand the partial second level into a full floor running the length of the home.

To further open up the second level, they will also add a dormer in the primary bedroom to create vaulted eight-foot ceilings. But first on Jacqueline’s to-do list is removing the Venetian plaster on the walls. Of course, the brick exterior and scribblings of formers students will remain untouched.

The family will miss being able to walk to nearby shops and grocery stores, but the town of Orangeville is only a 20-minute drive away. They’re also looking forward to exploring nearby bike trails, wineries and restaurants. But most importantly, Jacqueline and Ted are excited about giving their kids a rural upbringing, with the attractions of Toronto still only an hour away.

Do you have an interesting story about buying or selling real estate during the pandemic? We’d love to hear it: realestate@torontolife.com