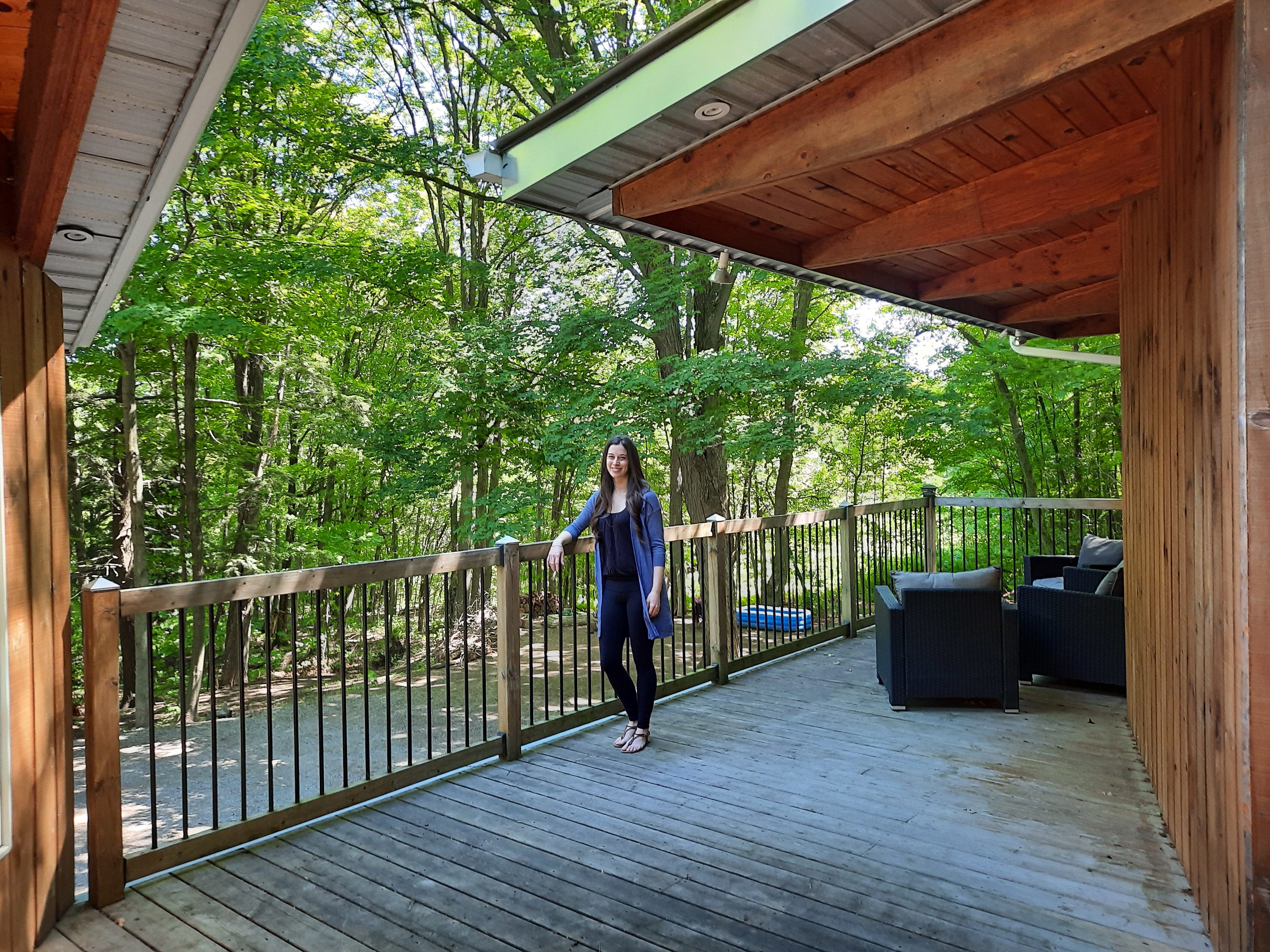 The history: In October 2015, Erica and and her partner—James Goligher, a  38-year-old marketing manager in the finance industry—sold their house, a small detached property in North York.

But in February 2016, they bought another property in the city, a three-bedroom semi in Davisville, a kid-friendly neighbourhood with good schools. “If we had to be in Toronto, that’s where it was going to be,” says Erica. 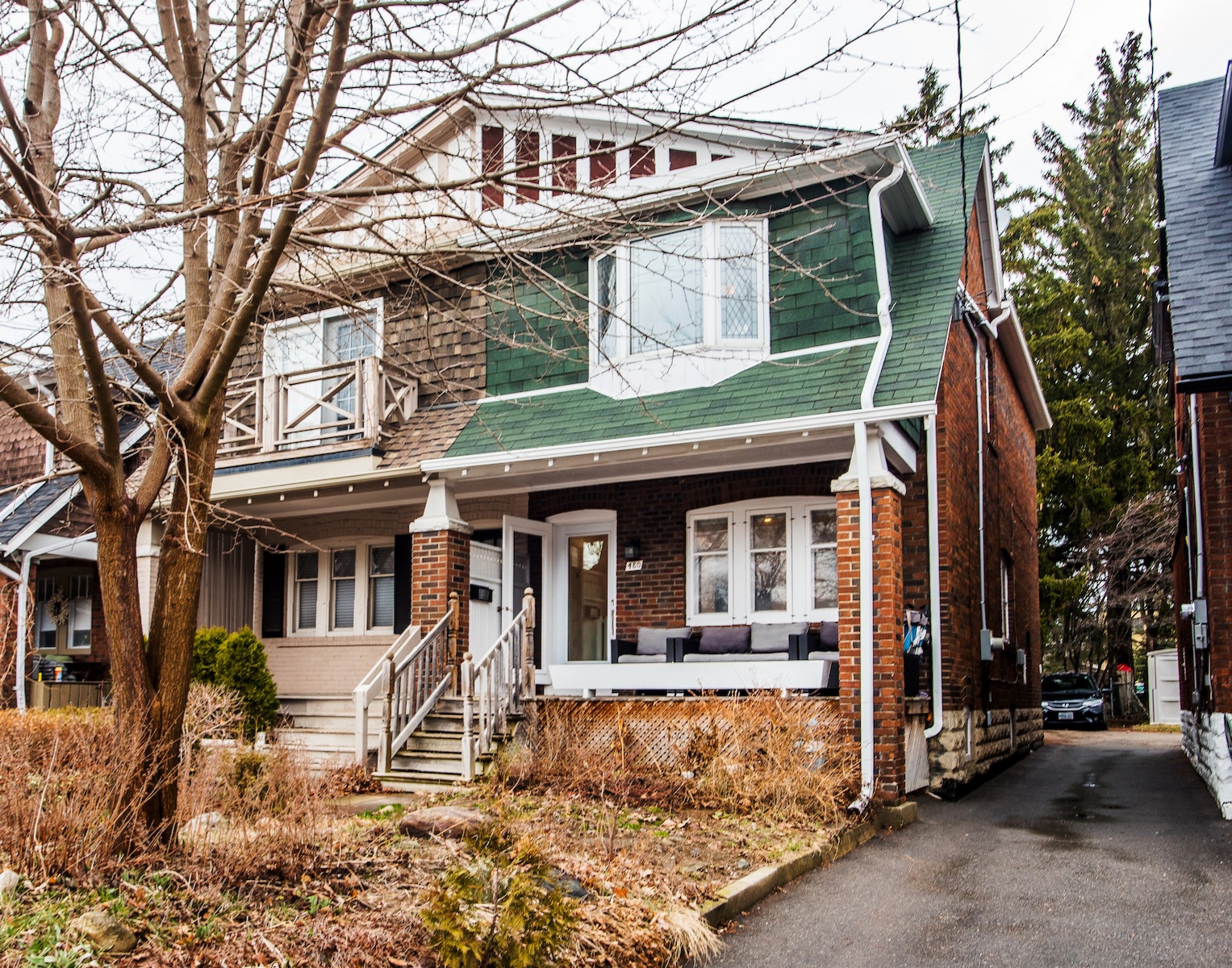 After moving in, the Golighers had two kids over the next two years. But they soon realized their new home wasn’t perfect. Sharing a common wall on one side and a driveway on the other, they felt crammed between their neighbours.

They were on a fairly busy street, too, and the noise from traffic and construction seemed never-ending. They longed for more privacy, space and peace. “We never felt that this was our forever home,” says Erica.

The hunt: As their kids grew up, the Golighers made regular day trips to towns around Toronto, including Uxbridge, Innisfil and Orillia.

They loved backcountry camping and spending weekends at friends’ and relatives’ cottages. “As we would drive out of the city, my husband would say that he could instantly feel his blood pressure lowering,” says Erica.

Determined to escape the city, the Golighers regularly checked MLS and HouseSigma for properties within an hour of Thornhill, where Erica’s family lives.

In late 2018, James spotted a three-bedroom bungalow in Uxbridge that was surrounded by acres of forest, but he didn’t think Erica would be interested in something so remote.

Separately, she stumbled upon the listing herself and immediately fell for the place. When she showed James, he laughed. “I’ve seen that one,” he said. “I didn’t show you because I figured there was no chance.”

When Erica called the listing agent, he explained that offers were due that night. The couple wasn’t ready to visit and make an offer so suddenly, so they passed. “It was totally the house that got away,” says Erica. “For the next 18 months, I thought of it often.”

In March 2020, Erica was browsing listings again and saw the same house back on the market for $1,080,905. By the time she saw it, though, it had already sold, conditional on a home inspection. She called the agent anyway, asking for a chance to bid if the sale fell through.

Two days later, the agent called back and invited the Golighers to visit. Something happened with the other sale.

When the family drove to Uxbridge, they loved the property as much as they expected. It was scenic and serene, exactly what they wanted. 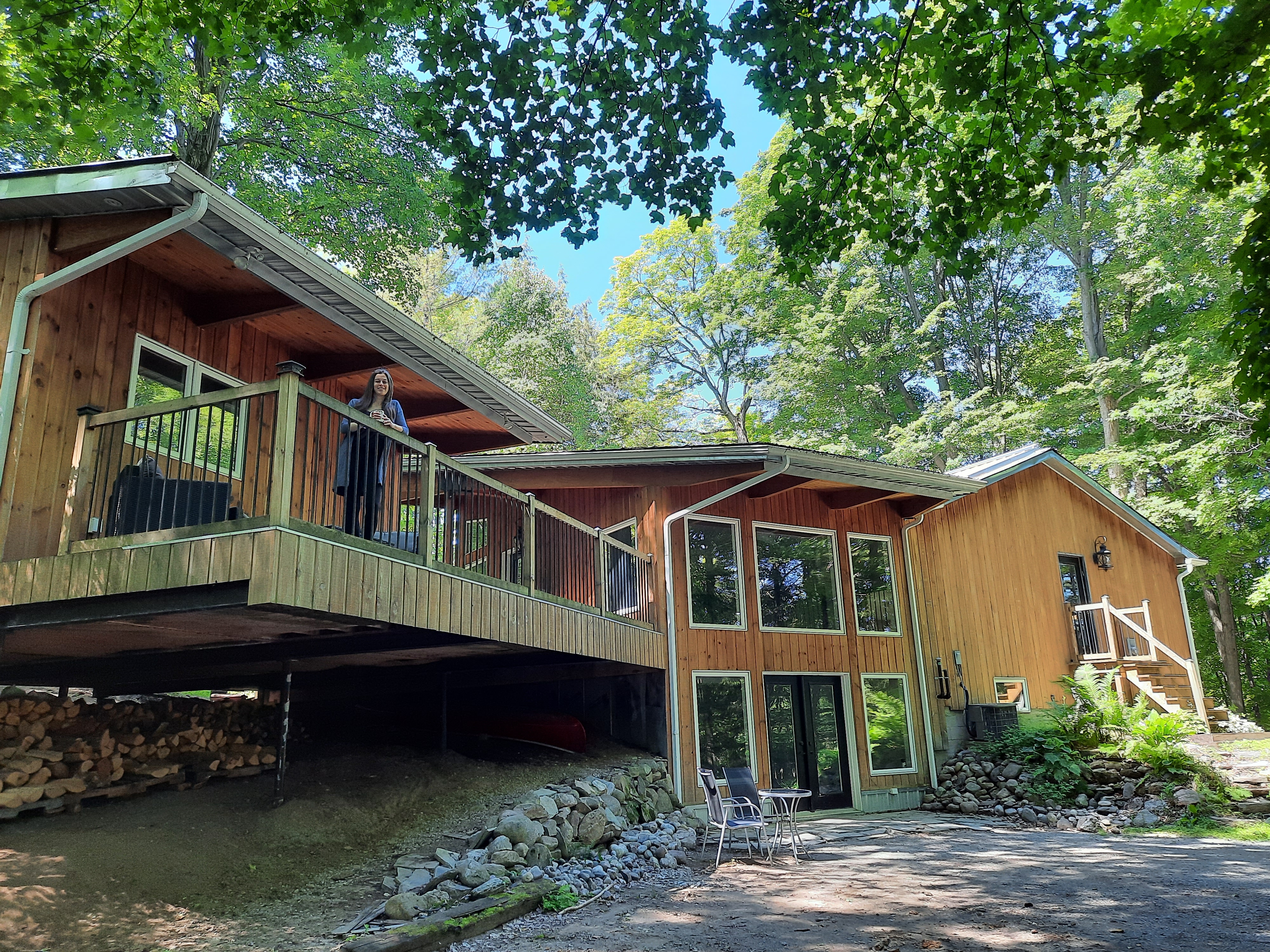 The house felt both modern and rustic. The interior was recently renovated, with a pristine whitewashed kitchen and a stunning bathroom featuring a claw-foot bathtub with a stunning view of the surrounding forest.

Here’s a look at the inside: 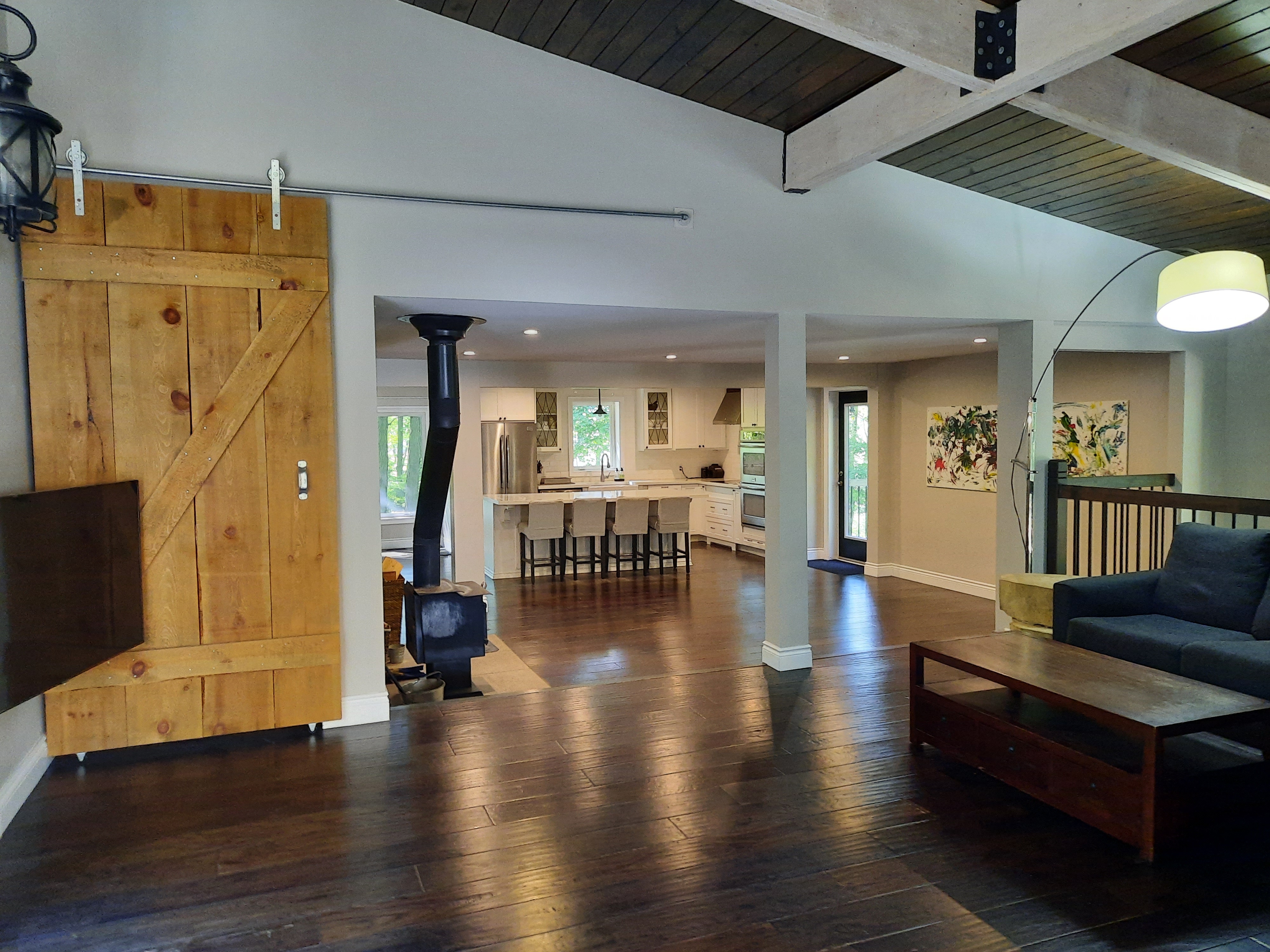 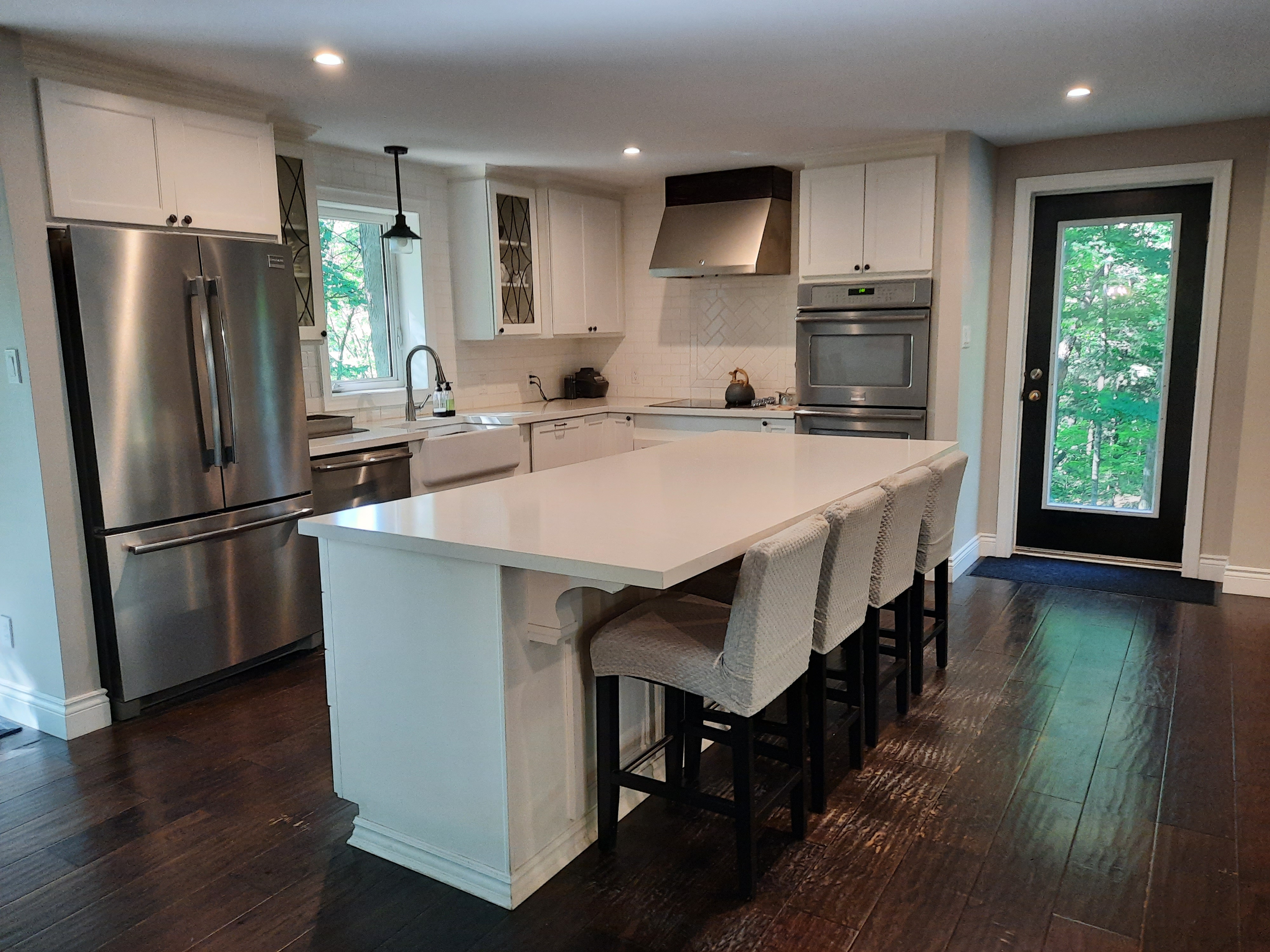 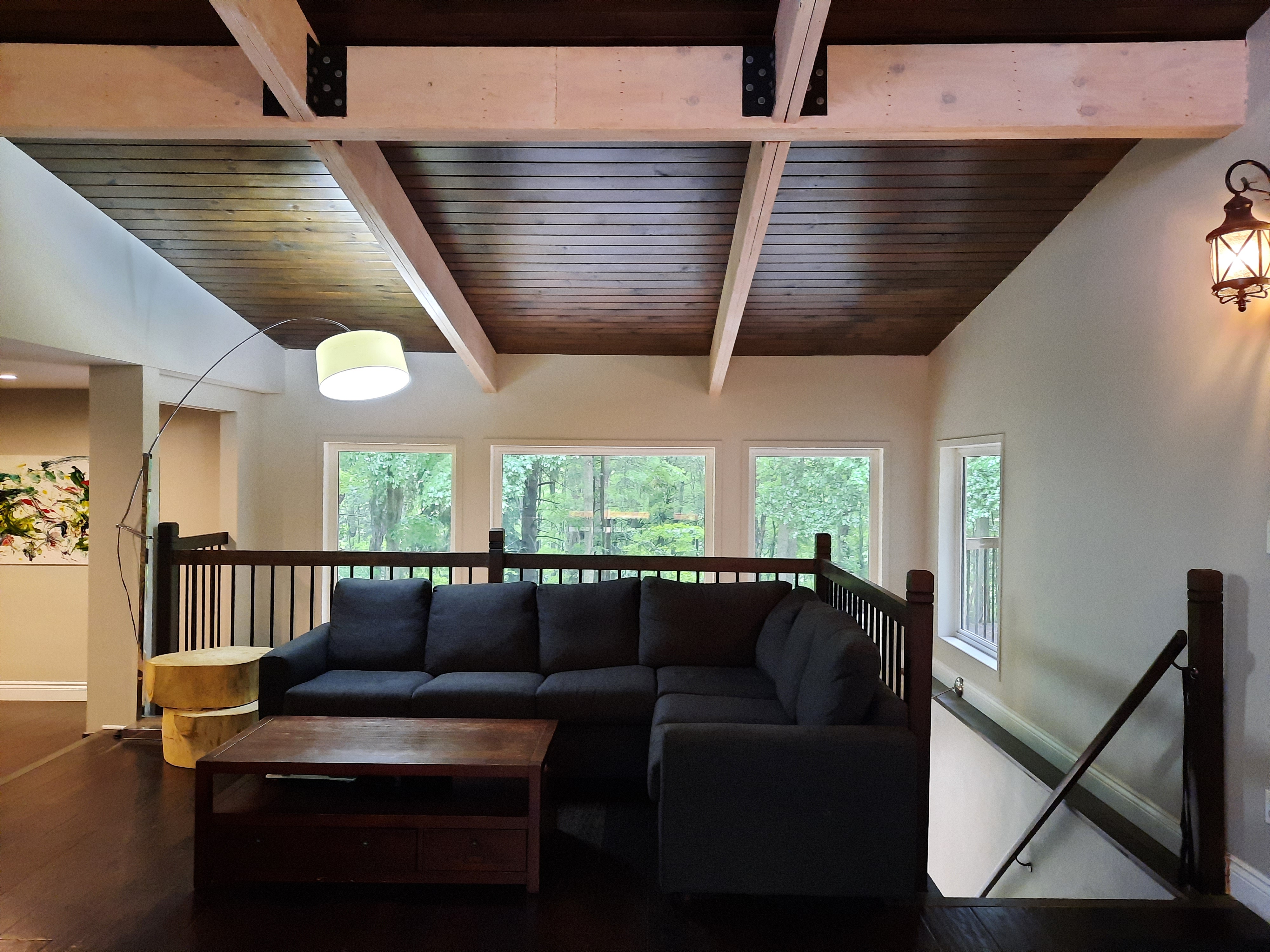 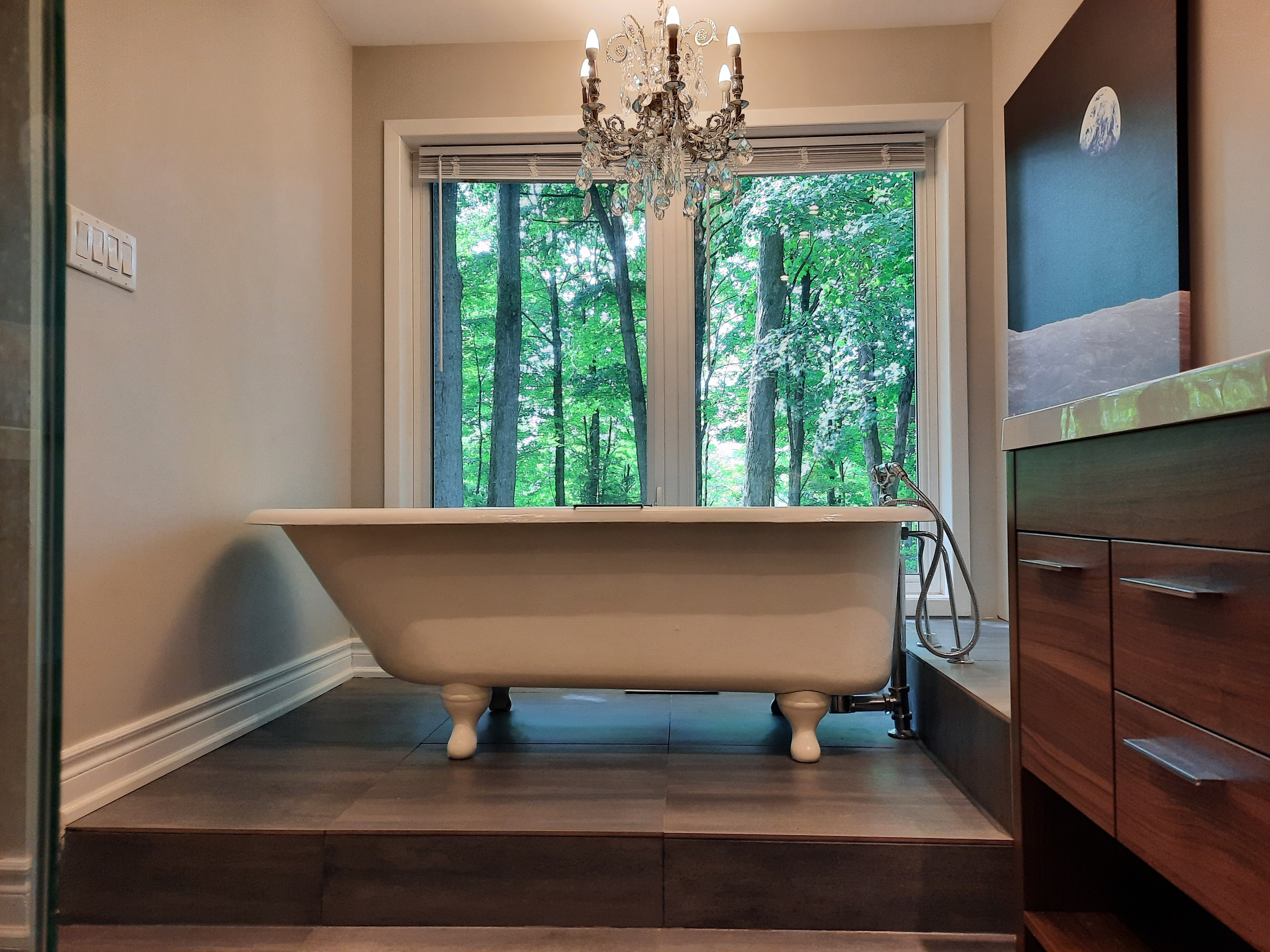 Outside, there were natural wood walls and a sprawling deck that wrapped around the side and back of the house. The house sat on 1.33 acres of land, compared to their 19-foot-wide lot in the city. It felt remote, yet it was only 10 minutes from Uxbridge and within 45 minutes of Thornhill.

On March 11, 2020, the Golighers offered $1,035,000, and the sellers accepted. “We signed all the paperwork and everything was good,” says Erica. “Literally that night, it was announced: global pandemic.”

That put the Golighers in a bind. “We thought the sale of our house would be easy-peasy,” says Erica. “Who doesn’t want a house in Davisville?”

But Covid brought the housing market to a temporary standstill—in the uncertainty of those first few weeks, buyers were afraid to go see houses, much less make life-changing financial decisions.

The Golighers listed their house for $1,199,000, but received only one offer, a lowball, so they took it off the market. “We weren’t ready to give it away,” says Erica.

Concerned they wouldn’t sell in time, the couple asked the bank about their options, including keeping the house and renting it out.

Ultimately, they wouldn’t need to. They re-listed two weeks later for $1,249,000. Then, sensing a lack of interest, dropped down to $1,149,000. The lower price earned them more showings and a handful of offers. In the end, the family got $1.2 million—their initial listing price—and a welcome wave of relief.

The outcome: The Golighers took possession of their new house on June 17, 2020. By then, they’d read blogs and watched videos about other people who’d fled the city—a growing demographic thanks to the pandemic. The move was exciting but scary; neither Erica nor James had ever lived in the country before.

But they quickly acclimatized to their new home. The parents took the primary bedroom, while each kid got their own room.

The family enjoyed morning coffee on the deck, backyard barbecues and relaxing around the fire pit. Instead of listening to traffic, they heard cows, dogs and songbirds.

Last summer, Erica and James built a terraced vegetable garden and the kids explored the forest, climbed trees and learned to bike in the driveway. When snow began to fall, they went tobogganing and cozied up by the wood-burning stove.

A year after their move, the Golighers have fully settled in. James, who has worked from home for 10 years, used to have an office in the basement of their semi; now, he works out of a 400-square-foot unit that’s detached from the rest of the house.

Erica splits her time between caring for the kids and updating her blog, nestledinthetrees.com, where she writes about the family’s rural relocation.

The Golighers love their new, slower pace of life. Their new house isn’t exactly the lakeside home that Erica had dreamed of, and James wouldn’t mind having even more land, but they’re thrilled to be living in their dream home, in a place they love. “The town is so quaint, and everyone is really friendly,” says Erica. “To me, it feels like we’re living in cottage country.”