A sustainability specialist bought this 600-square-foot condo in the Annex for $900,000. Then he decorated it with an Afrocentric twist

A sustainability specialist bought this 600-square-foot condo in the Annex for $900,000. Then he decorated it with an Afrocentric twist

Who: Tyrone Hall, a 34-year-old sustainability specialist at a software company 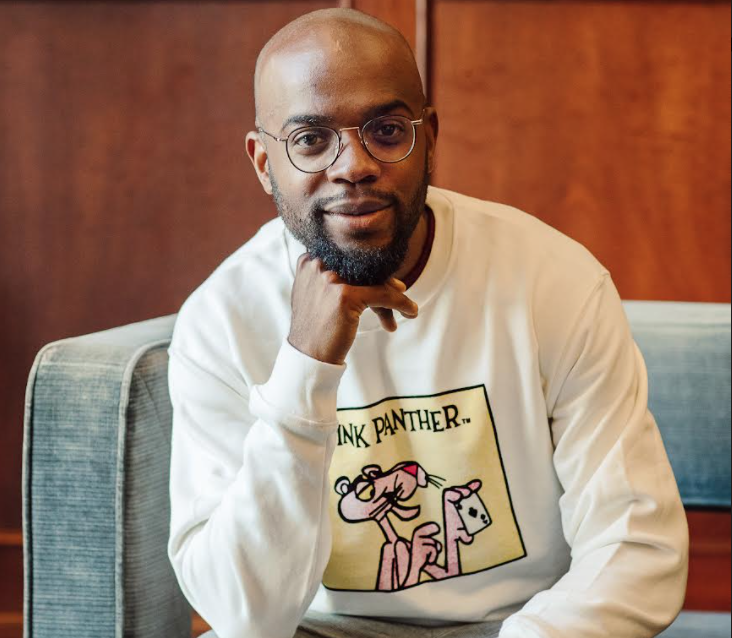 The history: Born and raised in Jamaica, Tyrone’s career in sustainability saw him travel throughout the world. During his 20s, he lived and worked in Belize, Fiji and India, among other places. In 2015, he moved to Toronto. He settled in the Annex, where he rented a series of studio apartments in the area over the next five years.

His neighbourhood was close to all the conveniences of urban life, but far from the congestion of the downtown core. Tyrone also enjoyed being close to galleries and art venues like the ROM and the Bata Shoe Museum, as well as the shops and restaurants of Yorkville Park.

Soon after moving to Canada, Tyrone began setting money aside to buy a condo in the Annex or the Bay Street Corridor. By early 2020, Tyrone had enough saved up to start his search.

He set a $600,000 budget for a one-bed, one-bath condo with a balcony and a gym in the building. He didn’t want to spend more than $750 on maintenance fees, so he preferred a newer condo building that required less upkeep and repairs than an older building. Tyrone also restricted his search to more secluded small boutique condos, rather than the busier high-rises.

The search: Soon after the pandemic hit in March 2020, Tyrone took a hiatus from his search. Since he wasn’t a Canadian permanent resident or citizen, Tyrone discovered he would have to pay a 15 per cent non-resident speculation tax on any property he purchased in the GTA. He decided to get permanent residency and buy a property once his application was accepted.

On October 23, 2021, Tyrone became a permanent resident. At that point, he was renting a studio apartment near Avenue and Bloor, paying $1,450 a month.

Two days later, he viewed a one-bed, one-bath condo in an Annex mid-rise, a short walk from St. George Station and Yorkville Park. The open-concept unit had 600 square feet of living space and a balcony, as well as a gym in the building. Maintenance fees were $604 a month, considerably below his $750 monthly cap.

The place was listed for $700,000, with an offer date scheduled for the same day as his viewing. Since it checked all his boxes and he no longer had to worry about paying a speculation tax, Tyrone was eager to make an offer.

The place was in great condition, so the only renos he had in mind were aesthetic redesigns, like adding a bar in the kitchen and replacing the protruding pot lights throughout with something more subtle and streamlined.

Although it was listed for $100,000 higher than the $600,000 budget he set a year earlier, Tyrone was able and willing to spend up to $1 million on the condo—thanks to his investments in a mutual fund that had soared in value during the pandemic.

Tyrone’s agent advised him that bidding would most likely be competitive, because of the location and relatively low listing price.

That afternoon, Tyrone made an offer at $150,000 above asking, with a 30-day close to make his offer more appealing. Seven other bidders made matching offers.

In the second round of bidding, Tyrone tacked on an additional $50,000 to his initial offer—while still also including a 30-day close. Later in the evening, the seller accepted Tyrone’s offer.

In November 2021, Tyrone took possession of his new condo. He hired Newmarket-based interior designer to handle the redecorating and aesthetic renos.

Tyrone decorated his condo with predominantly tribal artwork and accessories he’d collected while travelling and working in Asia, Africa and Central America. In the living room, the gold-framed print of a smoking man came from a market in Nairobi, Kenya. The pair of brown masks are Garifuna artwork Tyrone purchased in Belize. He picked up the handwoven patterned couch covers during a trip to Turkey: 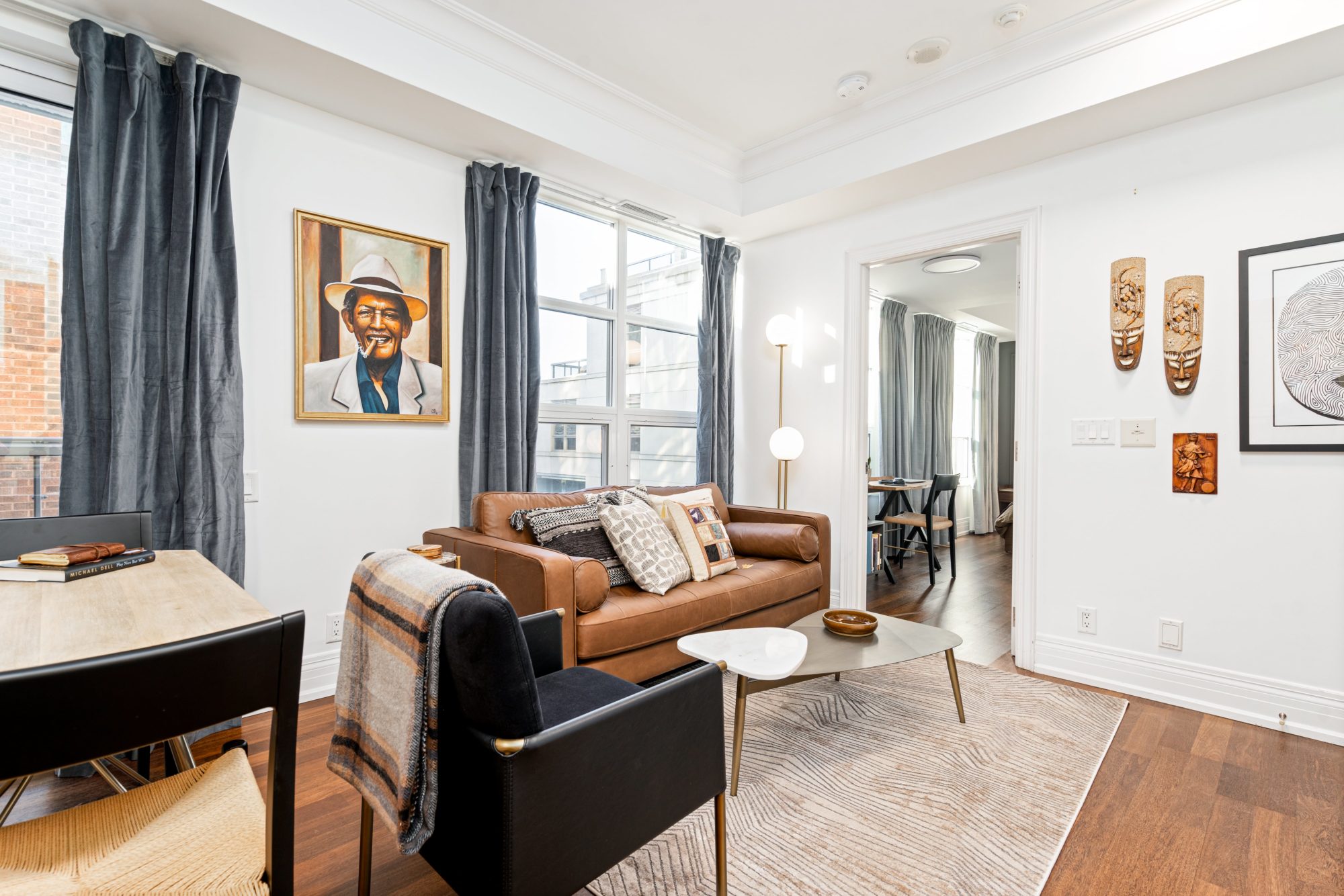 Keen to implement a minimalist and streamlined Scandinavian-inspired aesthetic, Tyrone replaced the protruding pot lights in the kitchen and elsewhere with flat ceiling lighting. He also transformed the kitchen cabinet next to the fridge into a subtly tucked away glass-doored bar. The expandable dining table comes from West Elm and is made from sustainably sourced mango wood: 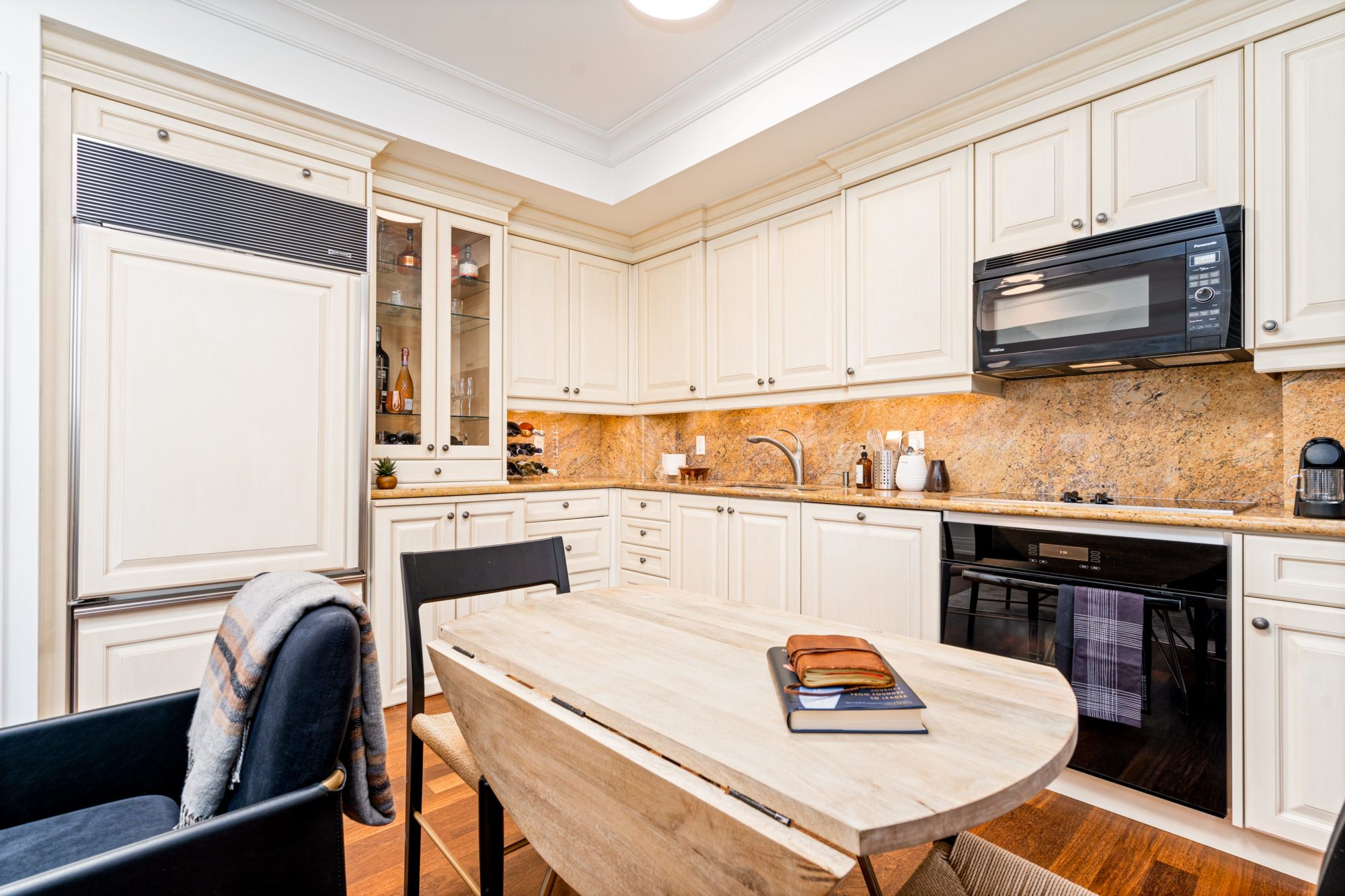 For this work nook next to the living area, Tyrone bought an acacia wood desk from Structube. He donated most of his books when he made the move to his new condo. He displays the prized remnants of his collection in floating shelves: 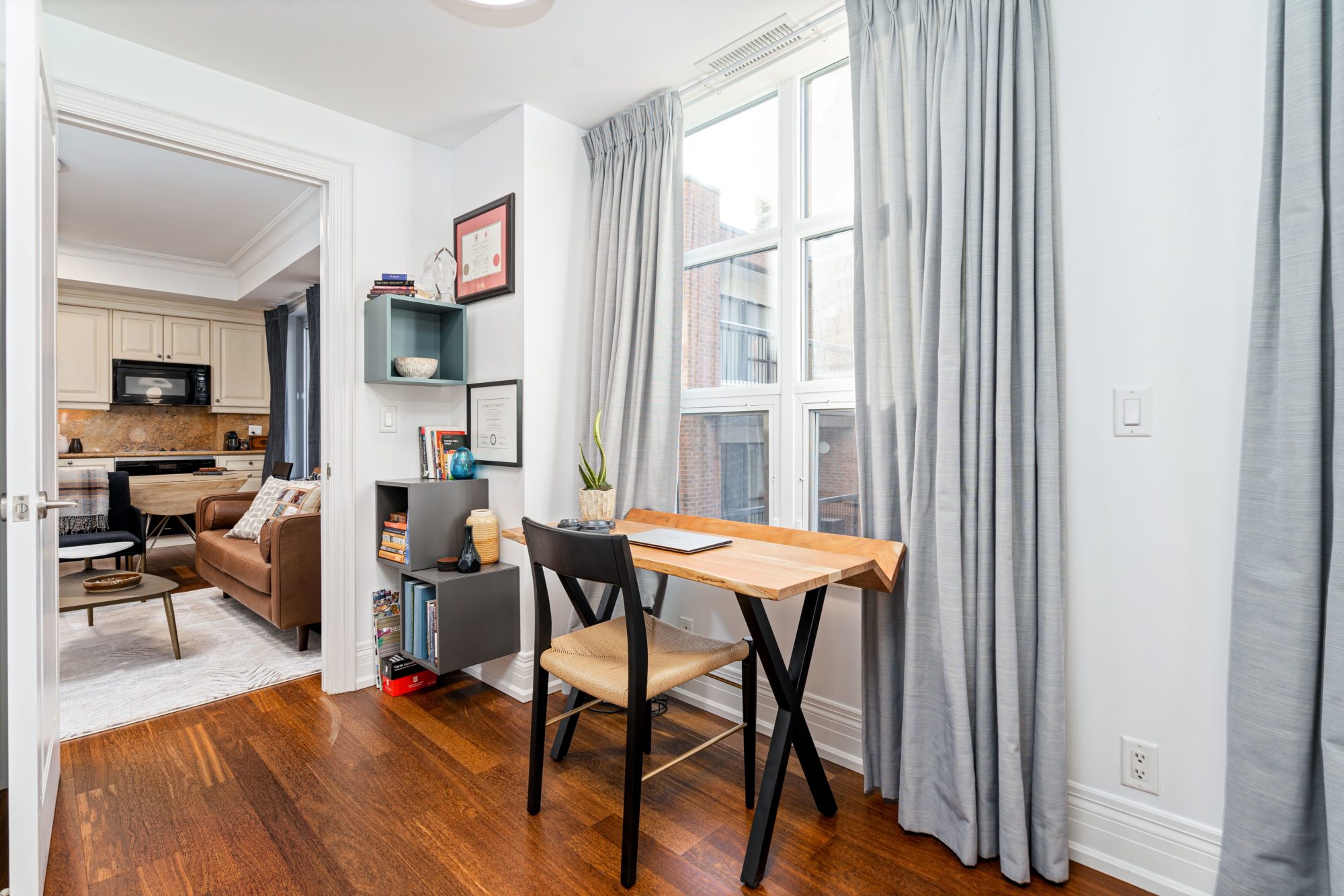 In the bedroom, the wall art is from Anaya Arts, an Ottawa-based Afrocentric collective. The teak nightstands have ceramic tops and push-to-open drawers. The linens at the foot of the bed were acquired by Tyrone in India: 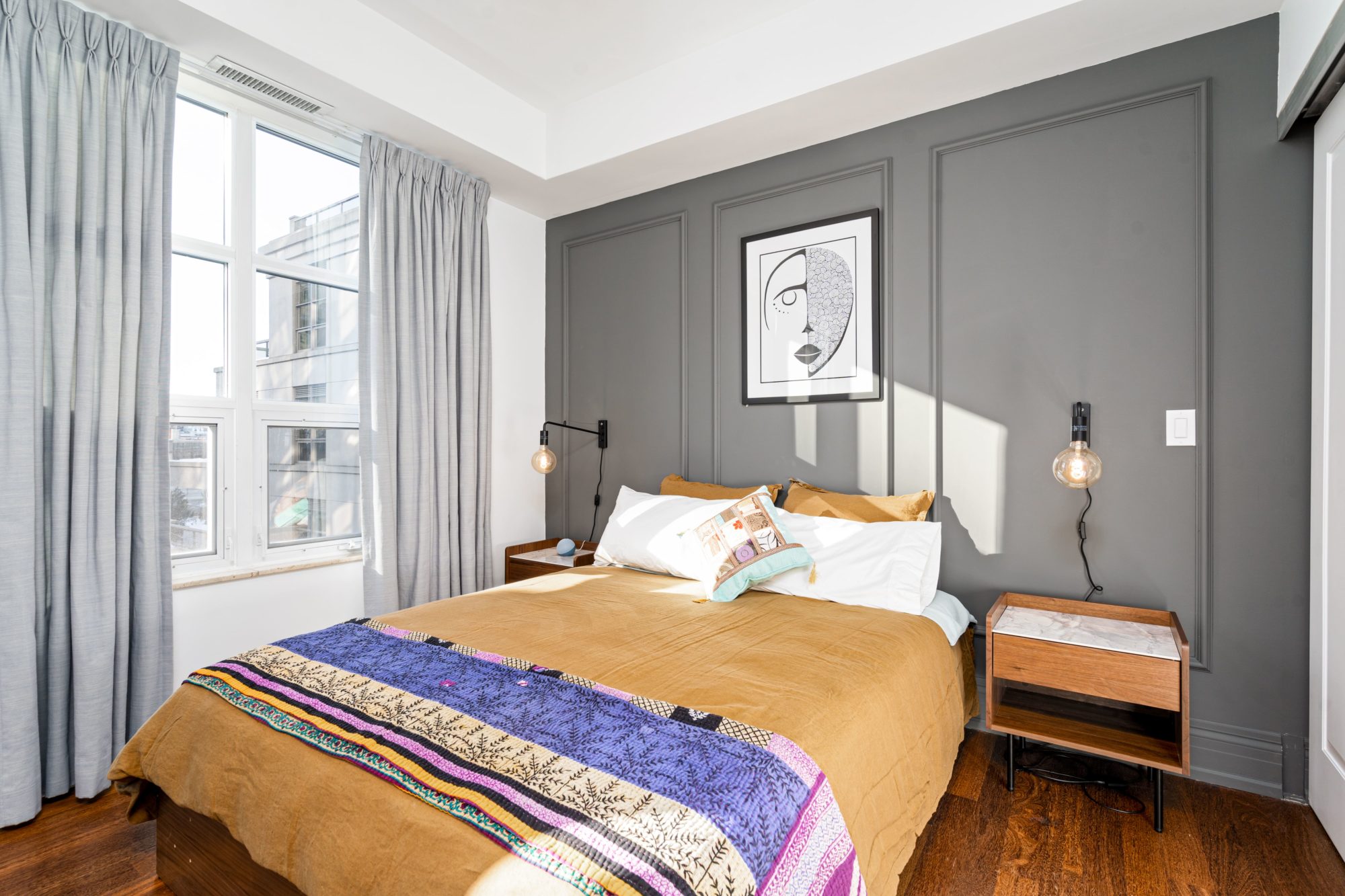 The outcome: In December 2021, Tyrone moved out of his Avenue and Bloor studio apartment and spent the holidays with family in Hamilton.

On January 8, he moved into his new condo. This spring, he’s hosting a friend visiting from New York, and looks forward to giving them a tour of the galleries and shops in midtown, with pit stops at the Bata Shoe Museum and Yorkville Park. He’s also excited to invite friends over for intimate Sunday brunches at his new digs.

Many of those friends have asked when he’ll upgrade to a two-bedroom condo or a detached, but he isn’t interested. “We’re all so obsessed with getting more and more stuff and living space these days, but I’m happiest with this little nook of my own in this wonderful city,” he said.