By Jonathan Forani | Photography By Alex and Haelie Carter |  December 11, 2020

The history: Alex has a long-time family connection to skiing. In the ’70s, his parents both worked as ski patrollers. He grew up in Toronto and had a membership at the Craigleith Ski Club, competing in ski racing as a teen. Haelie, originally from Alberta, spent weekends snowboarding at resorts in the Rockies. In 2006, they met in Greece while Haelie was on a backpacking trip and Alex was working at a bar in Santorini. They hit it off and started a relationship once they both came back to Canada.

In 2007, Alex convinced Haelie to move to Toronto, where they bought a 150-year-old Victorian row house in the Annex. Rylie and Hudson were born in 2013 and 2015, respectively. Both of the kids learned to ski at the age of two, and the family spent most winters in the Blue Mountains, where Alex’s parents have a place right near the Craigleith club. Every trip, the Carters wrestled with the idea of buying their own ski getaway, giving them some privacy, enough space to host friends and a place to eventually retire. In 2019, they started looking for a family chalet.

The hunt: The Carters set a maximum budget of $1.4 million. It had to have at least three bedrooms to comfortably host friends from the city. They wanted something close to the Craigleith, but far enough from the town centre to get some privacy. Ideally, it would be a ski-in-ski-out property, where the family could put on their gear in the backyard and head directly to the chairlifts. In late 2019, their realtors, Wendy and Marcia from the Chris Keleher Team, showed them three places near the Craigleith ski club. But those places weren’t a good fit.

Then, last December, during a weekend ski trip, Alex spotted a for-sale sign on the lawn of a chalet on Craigleith Road. It was a ski-in-ski-out property located right near the club. On the day of their viewing, they skied right up to the place, making full use of its ski-in potential. It had four bedrooms and two bathrooms, giving it more than enough space to host guests. The interior was dated, with green carpeting, floral wallpaper and a pink bathtub, which would require some renovations, but the foundation and floor plan wouldn’t require an overhaul.

After the owner listed the place the following week for $1.25 million, the Carters offered full asking price, with no additional home inspection or financing clauses. There were other bids on the table, including some bully offers that the owner turned down. On December 19, the seller accepted their offer.

The outcome: In early 2020, the Carters moved in. The seller left a lot of stuff: a sit-on lawnmower, a snowblower, bikes, golf clubs and hundreds of tools. Alex and Haelie hired a junk removal company to haul a lot of it to the dump, but kept a fair amount of usable items, including lanterns, ski memorabilia and booze. The Carters ripped out the carpet, knocked down some walls, and repainted and furnished the place, for about $8,000. In February, they used the chalet every weekend, shuttling back and forth between the Annex and Craigleith on weekends. 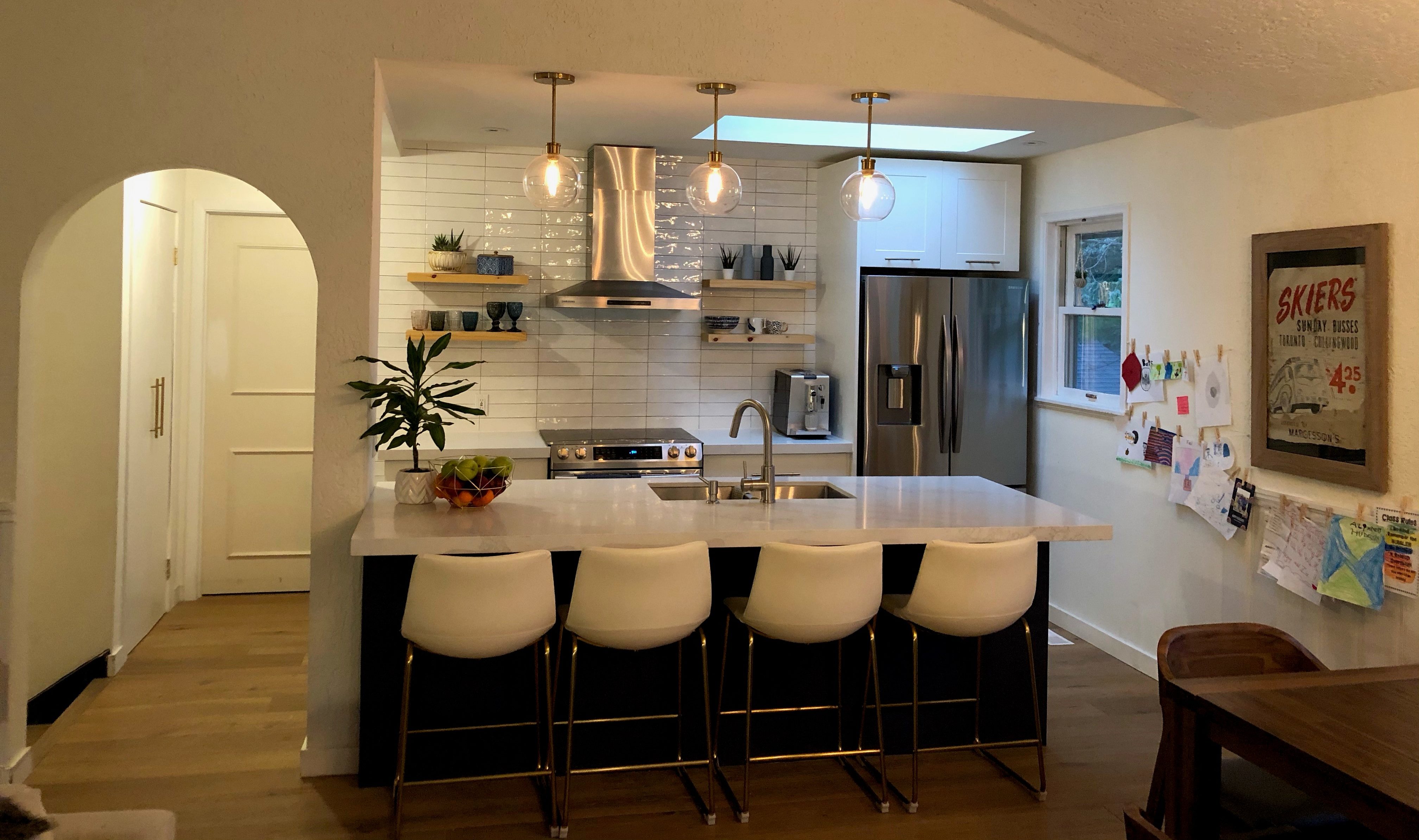 When Covid hit, they were heading up to the chalet for March break with the kids signed up for a ski camp, but public health restrictions forced the Craigleith club to close, and the kids’ activities were cancelled. Instead of going back to Toronto, they stayed at the chalet. Haelie, a former teacher, helped the kids transition to virtual learning, incorporating lessons throughout the day based on guidance from teachers. She already operated her baby gear business, Two Little Birds Handmade, from their home in the Annex, so she continued to do that remotely. And Alex’s staff were set up to work remotely, too. Instead of letting their Annex house sit empty, they let friends who were renovating their own houses, move in and pay the utilities.

By the summer, the Carters were still at the chalet full time, going on bike rides, catching frogs, swimming in Georgian Bay. They even bought a “Covid puppy” on Kijiji, a golden retriever they named Hank, and completed more renovations for an estimated $40,000, adding hardwood flooring, a new kitchen and a hot tub. 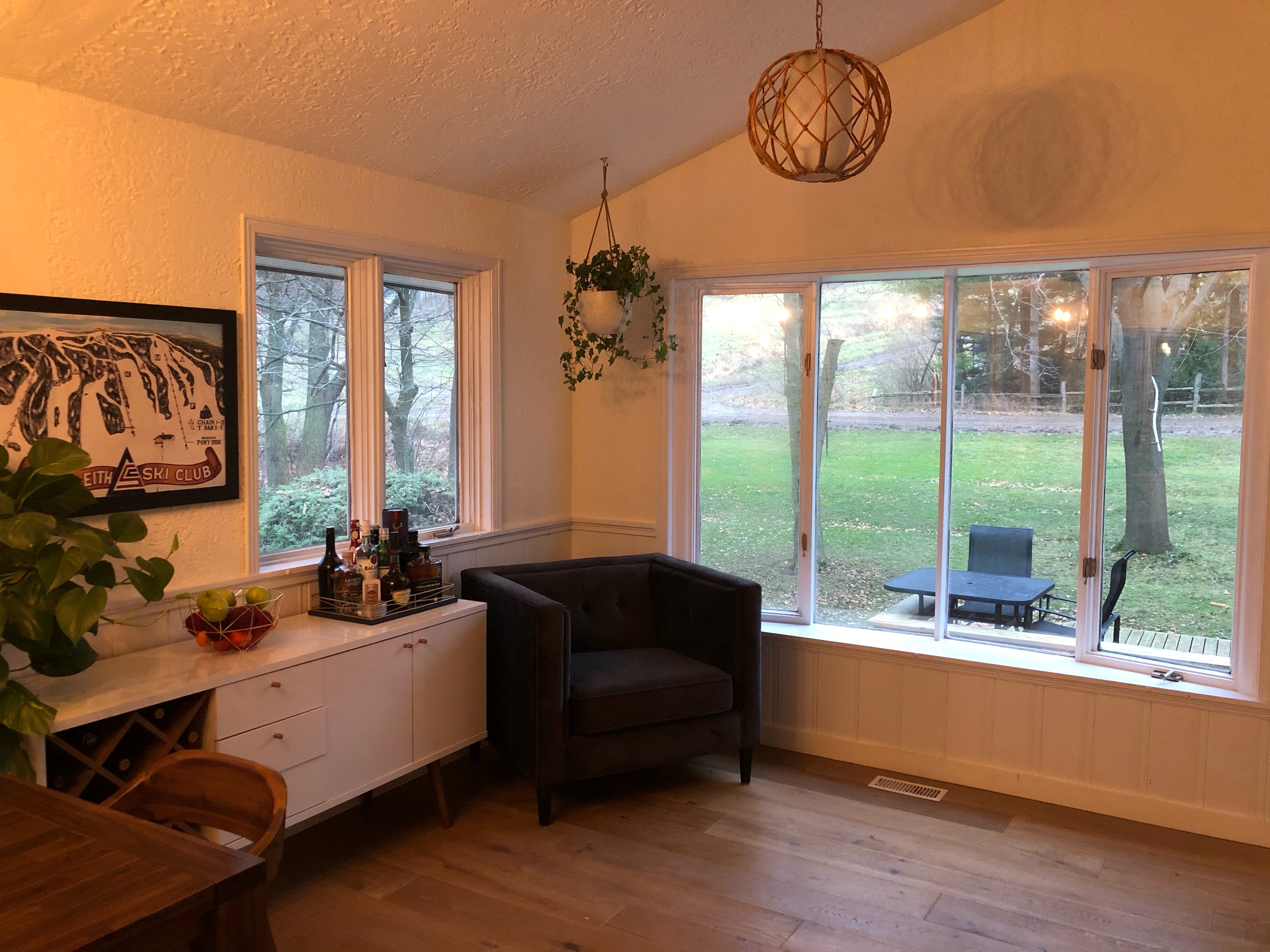 In July, Alex’s friend Koel bought a place a few minutes away. By then, the Carters had started to wonder if they should stay in the Blue Mountains permanently. Alex and Haelie could both work from anywhere, making the two-hour drive into Toronto and staying at their place in the Annex when necessary. The kids would have to switch schools, but Alex and Haelie found the Beaver Valley Community School in Thornbury, about a 15-minute drive from the chalet, where a bunch of their friends already had their kids enrolled. That sealed the deal.

In August, they pulled the kids out of the Toronto District School Board and put them in Beaver Valley, which had outdoor classrooms set up even before Covid. The kids love it. Weather permitting, the ski hills are set to open soon. The winter will be a bit different without the indoor “apres-ski” culture at the Craigleith, but the kids are still signed up for Christmas ski camps.

Of course, the Carters will miss the city, where the kids could walk to school and Alex and Haelie enjoyed eating out and going to concerts. But the Carters plan to spend plenty of time outside this winter. They recently bought outdoor heat lamps and a propane fire pit. Next, they’ve got their eye on a wedding-style tent for the back lawn.