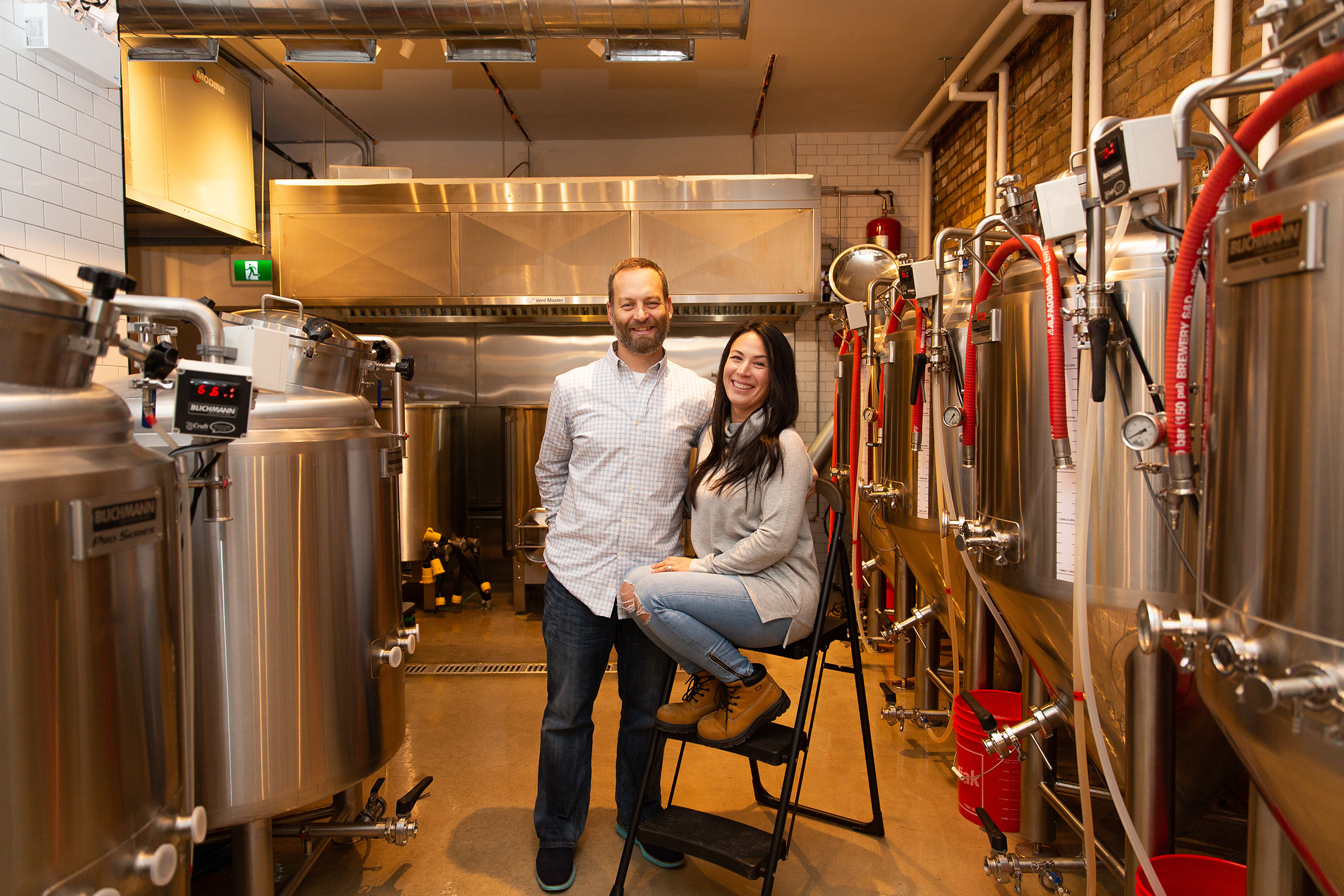 Sean Holden, a database manager at a trading company, and Sarabeth Holden, a project manager, met at Beau’s Oktoberfest. By their fifth date, they were visiting craft breweries in Vermont. And now Sarabeth has given up her desk job to run Red Tape Brewery, a new beer destination in the Upper Beach. (Sean moonlights as the master brewer.) Here’s how it all came together.

Sean: Sarabeth and I met at Beau’s Oktoberfest eight years ago. I grew up with the brewery’s founders—I used to skip school with them—so I was helping them out with the festival, filling a tank with old, noxious beer that they were going to dunk employees in for charity.

Sarabeth: I happened to be nearby, watching. At some point, a tube from one of the kegs started flying all over the place. Sean was trying to get it under control and, in the process, kicked over a bucket of bacon grease (it was there because grease helps cut beer foam). So, with a whole crowd of people watching, he got covered in grease, washed his boot off with old beer and went on his way. Later that night, I was out with friends and spotted him again. My friend said, “Hey, that’s Bacon Leg!” We made conversation, exchanged business cards and ended up going on a picnic at Casa Loma. For our fifth date, we took a road trip to Vermont to visit craft breweries. It was a make-it-or-break-it trip. Obviously we made it.

Sean: At the time, I’d been brewing for a couple of years. I was exposed to all kinds of specialty beers through the Beau’s guys, but I couldn’t find them commercially in Toronto. So I picked up some books and brew kits and figured it out on my own. The science behind brewing is really interesting, and it allows me to experiment with different flavours. I like creating styles of beer that I can’t find anywhere else. My dream retirement plan is to be a full-time brewer. I work as a database administrator for a foreign exchange trading company, and I started a brew club at my office. I created an Irish stout for St. Patrick’s, a vanilla porter for our VP and a beer we called the Tax Saison—all with their own custom-made labels. Three years ago, when our eldest son, Raymond, was born, I brewed a special saison and we sent it to our friends and family around the country. We wanted to break bread and celebrate with other people, sharing the same beverage remotely.

Sarabeth: That’s when things started coming together. We had always talked about starting a brewery, a place where we could create something that we were proud of and set an example for our kids of pursuing what we love.  I was doing contract work with the federal government—most recently, I was a senior policy advisor for the provincial ministry that handles advanced education. That job was fine, but we started thinking about our future. What did we want our life to be like? We knew we wanted to spend a lot of time with our kids, and we’re both really active people. How could we make that work?

Sean: Stock options from my company vested around that time. It wasn’t house money, or even boat money. But it was enough to help us start a business. Both of my parents worked jobs for 30 years. It was just what you did so you could do other stuff. We didn’t want to give that model to our kids.

Sarabeth: I started researching and realized, Oh, this is totally possible. We wrote a business plan—and then six more, because each level of government has specific requirements you need to meet to get a licence. In late 2019, before the pandemic, we found a location, a not-quite-1,000-square-foot storefront where we imagined installing a big, west-facing garage door at Main and Gerrard. We knew we wanted it to be a beautiful space, a taproom that wouldn’t serve any food. We didn’t want to deal with the regulations around raw chicken, and we figured we could partner with caterers and food trucks. It was a busy time: our son Jackson was born just a few months later. 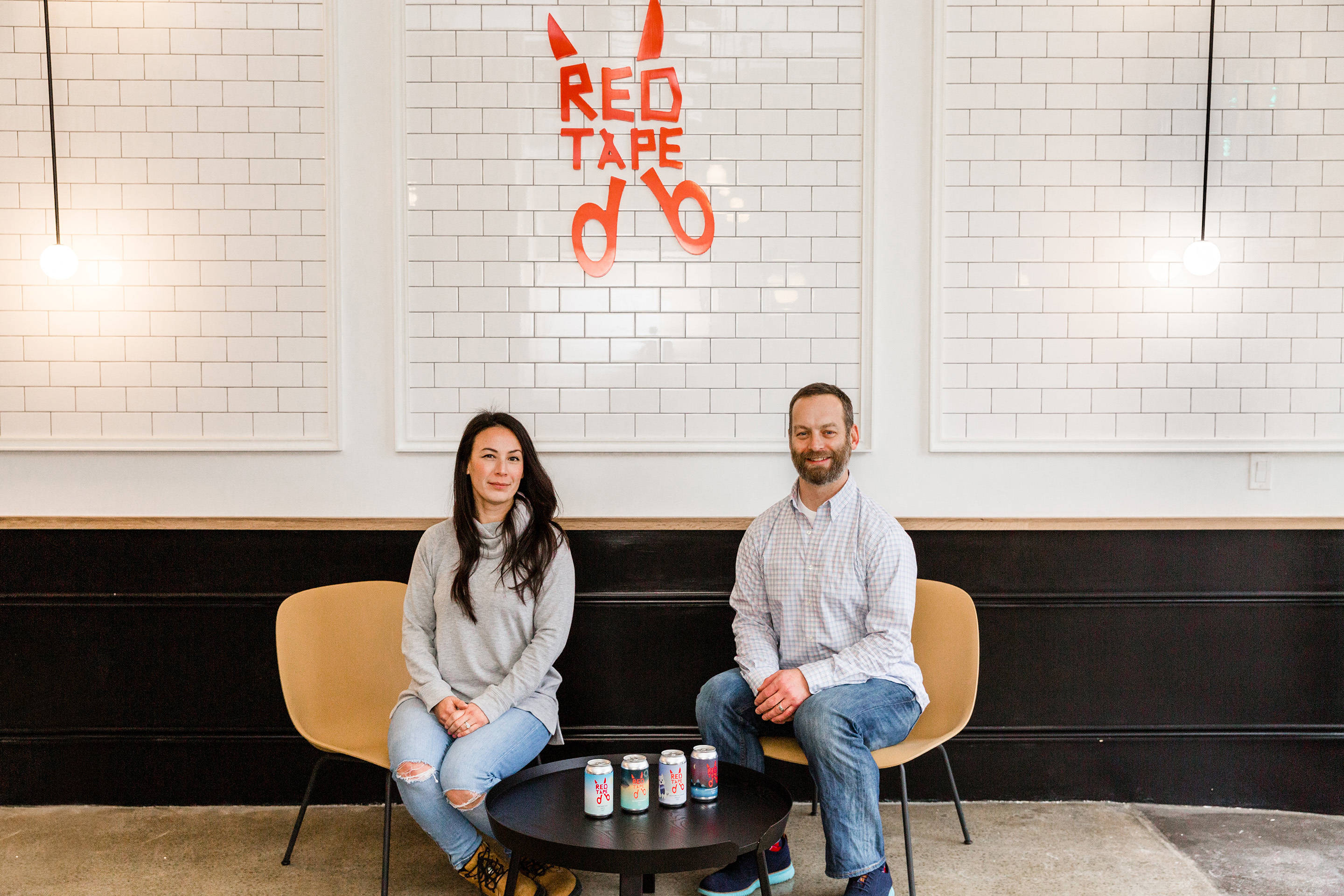 Sean: Our name actually came from the red electrical tape that I used to label all my brewing equipment and bottles. At first, we expected government officials to get their backs up every time we called and introduced ourselves as Red Tape Brewery. But they always chortled and said, “That’s great!”

Sarabeth: It’s challenging to open a brewery in the best of times. During the pandemic, it’s amplified. We’d spend time tracking down the right person to speak to about building permits, only for them to tell us we needed to talk to someone else. There were times we didn’t know whether or not we needed to stop construction. Getting equipment across the border was tough, too. When everything shut down, we had to pivot our business. We were counting on 40 per cent taproom sales, but now we have to can everything. I didn’t know anything about canning. My background is IT project management. But I’ve learned more about CO2 in the last two months than I knew there was to learn.

I’m not a brewer, and I’ve always planned to leave that to Sean, but being in charge of packaging gives me a chance to get to know the beer above and beyond tasting it. We’re in the toughest part of starting a new business right now, that first year where everything seems like a challenge, but I wouldn’t trade it for anything.

Sean: As brewmaster, I’m in charge of brewing, fermenting, pressurizing, preparing for packaging, cellaring and monitoring inventory. Our sons are one and three, and we don’t have family in Toronto, so we can’t call on aunts and uncles and grandparents to babysit. Even if we did, it’s a pandemic. So we work when they’re asleep. I sometimes brew until 2 a.m. We’ve worked the canning line until 4 a.m. And I’m still managing a team at work, so, yeah… The day before the brewery officially opened in December, I got maybe an hour of sleep.

Sarabeth: It was amazing to finally have customers come into the brewery. Our space is not what you picture when you think of a beer hall. It has marble tables, white oak everywhere, beautiful chandeliers. People in the neighbourhood were in awe, taking pictures and telling us they’d been waiting for something to happen on this corner for a long time. It could have been the lack of sleep, but one Saturday night I was going through pictures people were posting of our beers and I was in tears. Sean walked in the room and I held up my phone, like, “People like us! They really like us!”

Sean: We have space for about 30 people. We’re hoping to host some micro-weddings, Zoom family reunions, other events. And we’ll be able to make bespoke beers for those events, like we did for our son’s birth, so people can tune in from elsewhere and drink the same thing. Our bespoke beers are start-to-finish customizable, including the label. For one wedding we hosted, the groom’s colour was orange and the bride’s colour was blue, so we made an orange-mango saison and a blueberry-raspberry wheat beer. 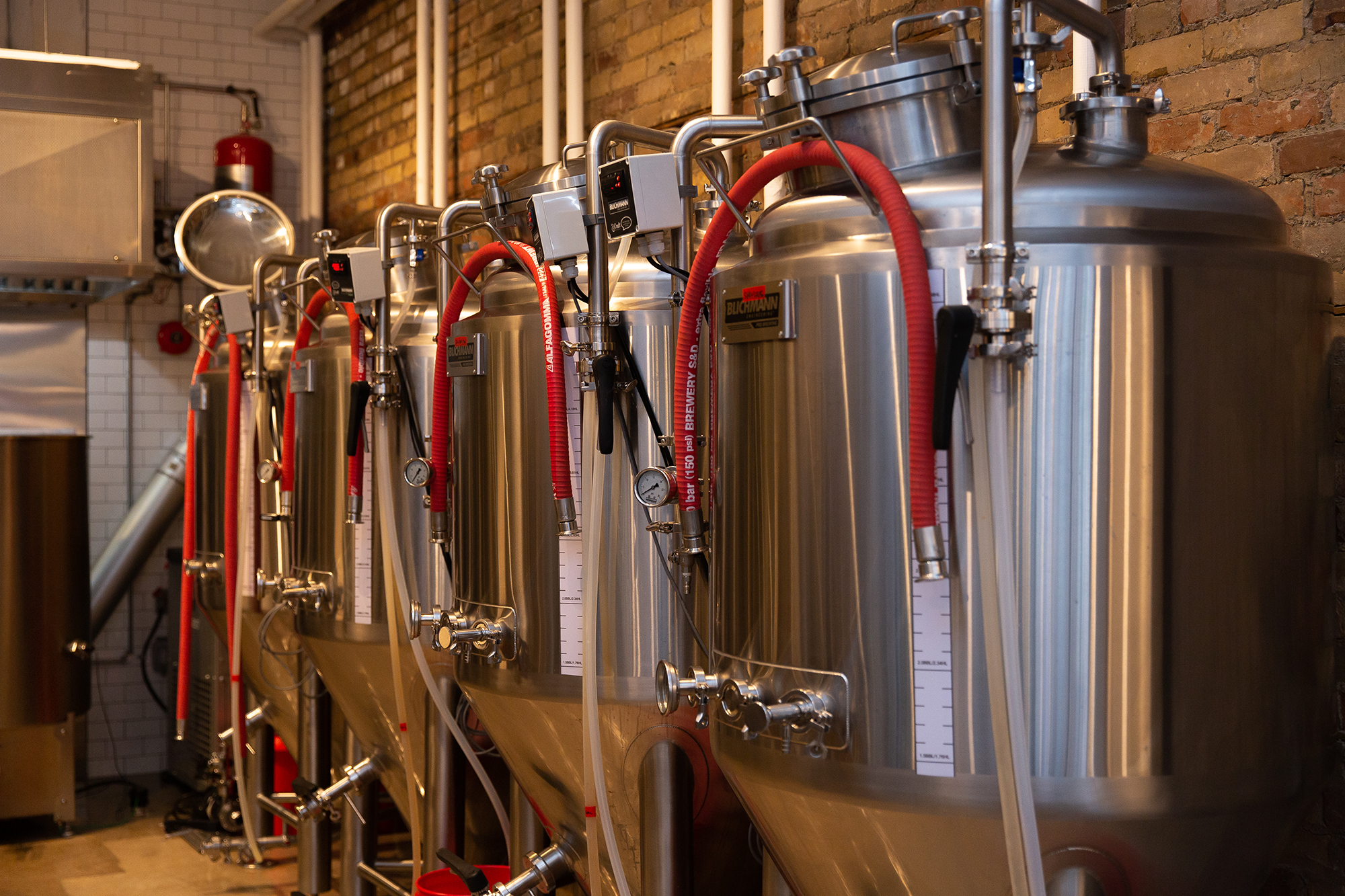 Sarabeth: We’ve been overwhelmed with requests for custom beers since we opened: weddings, milestone birthdays, gifts. And our first larger-batch beer, a pale ale called That Was Easy, sold out almost immediately. Right now, we’re considered essential retail because we’re selling alcohol. But no draught is set up right now. We hope to open the taproom at limited capacity in July. I can’t wait for a time when people can just text their friends, “Hey, want to grab a drink at Red Tape?” I’m looking forward to those beautiful summer nights.

Sean: As for my dream retirement, Sarabeth is in charge of the business plan. When she tells me it’s time to be a full-time brewer, I’ll listen.