“You have minutes, maybe seconds, to get it right, or they’ll die”: A doctor describes what it’s like in hospital emergency rooms during Covid-19

“You have minutes, maybe seconds, to get it right, or they’ll die”: A doctor describes what it’s like in hospital emergency rooms during Covid-19 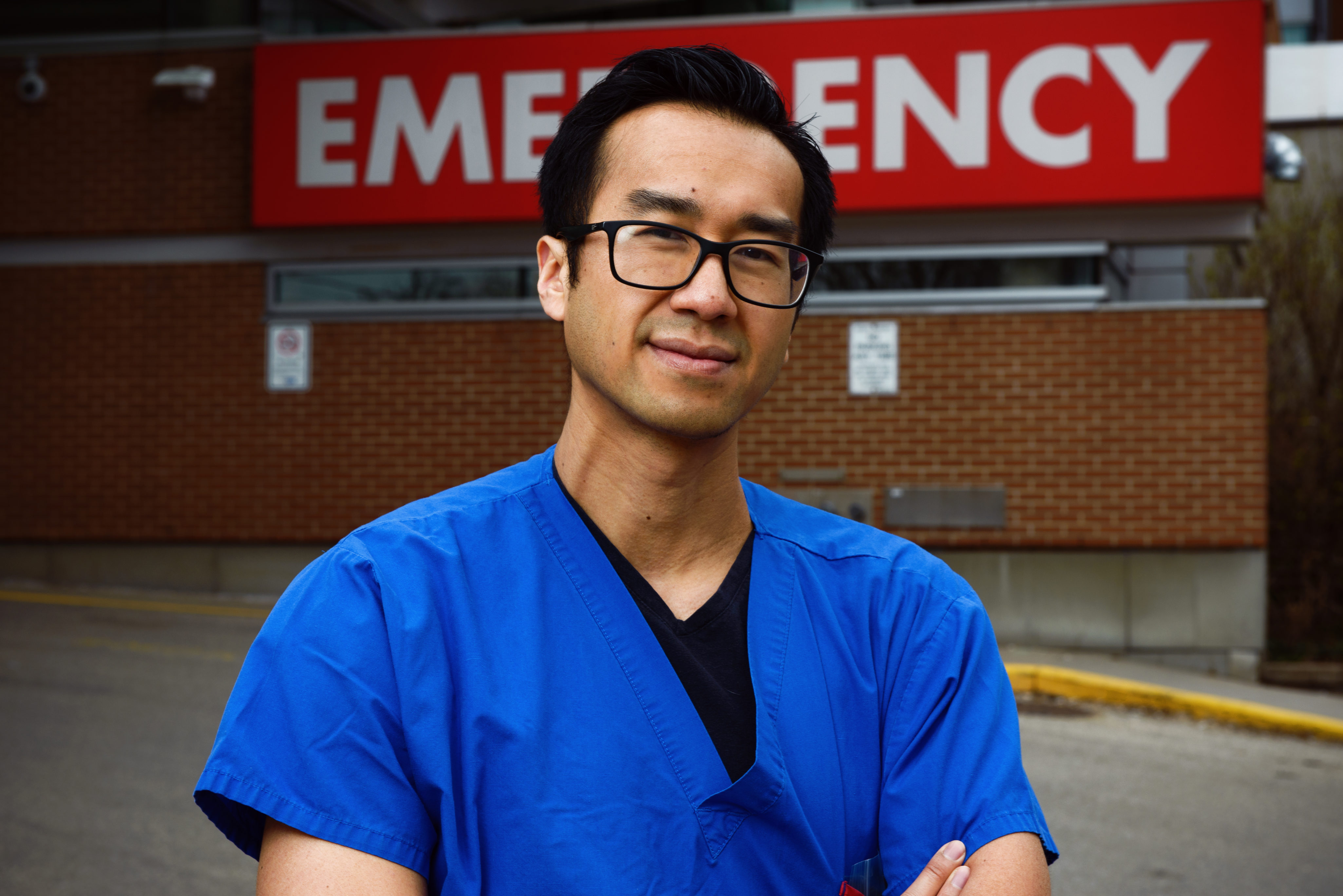 I work as an ER doctor at two large hospitals in downtown Toronto. Even before Covid-19 struck, we were already dealing with a surge, with five to 10 per cent more patients coming in each year. As downtown Toronto got bigger and denser, we felt the condo crush, young people coming in with fractures, abdominal pain, fevers. After cannabis was legalized, we saw a jump in weed-related visits: grandma sees a plate of brownies on the table, eats one, and an hour later she thinks she’s dying. And then in the Bellwoods–Little Italy–Little Portugal–Roncesvalles stretch, we’re seeing a lot of folks who are getting older and experiencing the health problems that the years pile on. The wait times are longer, we’re hustling harder. The breaks are non-existent. There is just a crush of people all the time.

And then Covid-19 hit. When news about the coronavirus started trickling out of Wuhan, we were slightly concerned, but we weren’t sure what was going on. We all move fast, we all have ADHD. And we didn’t anticipate the scale. We were in the middle of flu season, so we thought, Maybe this is just going to be a worse version of what we’re already seeing. At first, there were a few Covid patients who started coming in, all travel-related, presenting at a very slow pace, so we weren’t super concerned. Then, in February, it hit Iran. Because of our large Iranian diaspora, Toronto had a lot of people coming home with Covid-19. We realized there isn’t a lot of travel between China and Iran, so they must have been infected in some way that’s not attributable to exposure in Wuhan. That’s when we got worried. All our information was coming in piecemeal through word of mouth—Twitter, colleagues who work at other hospitals in the GTA. Once Italy got it, that was the world’s wake-up call—like, holy shit.

It was disconcerting. We’d be hearing one thing on the ground, and then we’d reach out to the official channels, and they wouldn’t have a statement until the next day. But by the time they’d made that statement, things would have changed on the ground. By the time our governments responded in mid-March, our fears and suspicions were validated. In the beginning, we were planning for the best-case scenario. Take personal protective equipment: there are normally very strict guidelines about how you use PPE, how you put it on, how you take it off. All of our PPE is meant for single use—every time you see a new patient, you change your mask, your face shield. But that’s in an ideal world, which isn’t the one we’re living in. Our PPE policy has now changed. Now we’re being told that the entire province is pooling personal protective equipment, with each hospital redirecting its stock into a centralized pile. Our projections for our own hospital’s stockpile are now useless. And now single-use PPE is being reused, over and over. Our supply chain is totally disrupted, and every hospital on earth needs this stuff. You only get two masks per day now. It’s unsettling—will I have the PPE I need when the crashing patient comes in?

When I saw my first Covid-19 patient, in February, there was no guideline about how to manage these patients, who to test, when to test, what to do after you test. The first case was a very mild one, a young woman in her late 20s or early 30s who had contact with someone else who was Covid-positive. Because she’d had contact, she was being followed by Toronto Public Health. Back when they still had the capacity, TPH would call her every day to check up on her. When she developed symptoms, they were concerned enough to direct her to my emergency room. I knew immediately she had it. She had a headache, an ongoing fever, a bit of a sore throat. She felt tired, but she looked okay, and her vital signs were good. I sent her home. The next day, it was no surprise when her tests came back positive. I don’t think she ever came back—I didn’t follow up with her after she left.

We now have a new protocol called a Protected Code Blue. A regular code blue is an emergency, when someone is in cardio-pulmonary arrest. They announce it over the speakers. In normal times,  it’s all hands on deck: there are lots of people in the room, running in and out to coordinate and deliver medication and care. Now, whenever there’s someone who’s really, really sick, and we announce a Protected Code Blue, there’s almost no one in the room with them. We assume they have Covid-19. You just don’t know, so we’re trying to maximize precautions and not get inadvertently exposed to the virus. Lots of us are outside the room when we’d normally be in it. Just last night, we had a patient who came in sick and we called a Protected Code Blue. I communicated with the team inside—a doctor and two nurses—using a baby monitor, on the other side of the door. I can’t imagine what it’s like for the doctor in the room. You feel so alone as you’re resuscitating this patient. I’m there on the other side of the glass, giving advice into a baby monitor. It’s not the way we’re trained to do this job.

And then there are the horror stories. We’ll get a heads-up from EMS that they’ve got someone in respiratory distress; we assume it’s Covid-19 until it’s proven otherwise. We try to get our dwindling PPE on as quickly as possible before they arrive. The media talks a lot about “respiratory distress,” but that’s a euphemism. These patients feel like they’re dying. They’re out of breath. They can barely speak. They’re terrified, and that terrifies us. They get into the room. In Covid-19 patients, when it goes bad, it goes bad really fast. When we know a patient needs to be intubated and put on a ventilator, we give them medications to sedate and paralyze them, because you can’t go through that when you’re awake. But as soon as you sedate them, they’re not breathing. Their oxygen levels, already precipitously low from the disease, start to plummet even further. You try to find the airway and put the tube down their throat. Sometimes that’s not so easy. There are things we’d normally do in this situation that we aren’t allowed to do anymore. We can’t bag mask-valve them—using just a bag to squeeze air into their lungs with our hands, as you wait for the intubation. It’s too risky now, since it sprays the virus into the air. In a procedure that used to be anus-clenching in the best of times, you now have one shot. You have to get the tube in on that first try. You have minutes, maybe seconds to get it right, or they’ll die. The slower you start, the faster they’ll go.

I’m lucky to be able to say that most of the people coming into my ER to get checked out for Covid-19 are coming in out of an abundance of caution. That could change. The government has done a good job of setting up Covid clinics, so a lot of those worried people get screened there first, instead of coming directly to the emergency department. But as time goes on, the patients coming in are getting sicker and sicker. The demographics are changing. It used to be that they’d all travelled abroad. Now the majority of the cases are from community transmission. They come in looking sick, with a fever, shortness of breath and low oxygen saturation. Most of the positive patients I’ve seen are middle-aged, between 40 and 60. They’re sick, but they’re not crashing. Unless they need to be admitted, we’re sending as many people as we can out of the hospital, so that they’re more comfortable at home, and to avoid filling up beds with Covid-19 patients who could infect everyone else. We don’t quite know who is going to get really sick—lots of young people without co-morbidities end up crashing.

The ER is eerie. My colleagues and I have so much angst. Imagine standing on a beach, watching a hurricane come ashore. You’re there on the sand. You know what’s coming. But there’s nothing you can do as it rolls in. I hate to mix metaphors, but it’s like a car wreck in slow motion. My colleagues and I are thinking, I don’t want to get sick. I don’t want to infect my family. But when a crashing patient comes in and you don’t have the PPE, what can you do? Do you rush in and play hero, and put your own life at risk? We don’t know. The official policy is: protect yourself first, always. But I don’t know. By not acting immediately, I could cause someone else’s death. The hospital can’t tell us how much PPE we have left, which is causing us so much anxiety. I don’t think we’re headed toward New York or Italy. But in the back of my mind, I always wonder. I’m sure Italy didn’t think it would be Italy. I’m sure New York didn’t think it would be New York.

Since Covid-19 descended on the world, I’ve seen camaraderie in the hospital like I’ve never experienced. Before this disaster, when our hospitals were always overrun, our volumes ever increasing, everyone was always on edge; they were all just trying to do their own job in what’s now a lost world. Last night, at six in the morning at the end of my night shift, one of my colleagues from radiology said, “Hey I just wanted to let you know that I appreciate what you’re doing.” That never happens. The sun was about to rise, and I almost teared up. I’m sure it was a throwaway line, but it made my day, as it was about to end and start. Now we have a common purpose and a common enemy. At the end of this, I hope we appreciate each other more.