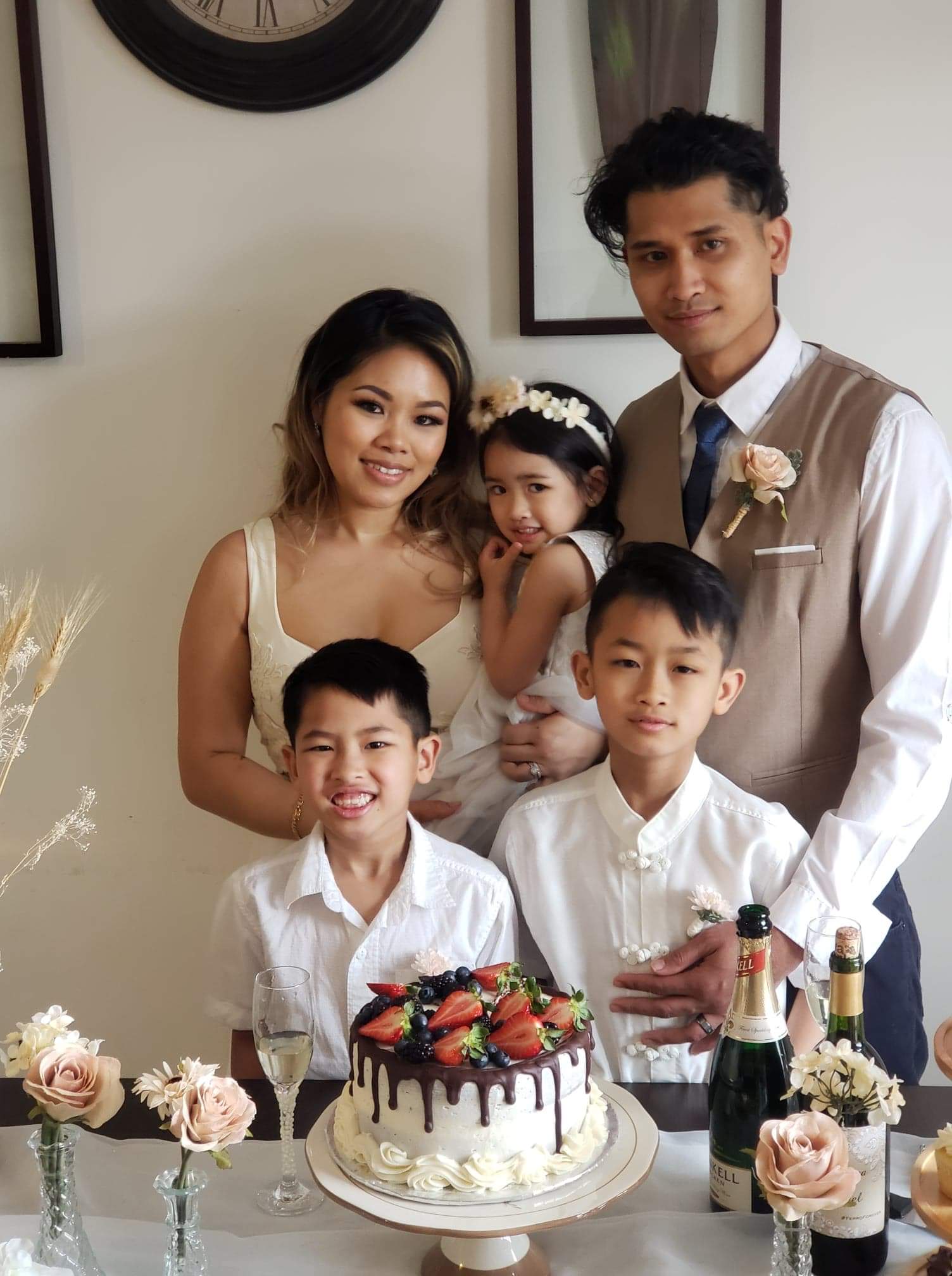 Christeena Sayasa, a stay-at-home mom, and Gabriel Ferro, a die-cast operator for Honda, met through a mutual friend when she was 19 and he was 20. Ten years and three kids later, they were finally ready to tie the knot—and then Covid hit. Here’s how their quick and easy porch wedding came together.

–As told to Andrea Yu

Christeena: Gabriel and I met in the spring of 2010. At the time, I was living in Brampton with my parents. A friend and I were planning to go clubbing in King West one night, and she suggested we get ready at her friend Gabriel’s place in North York. The whole time she was talking about Gabriel, I thought it was a girl.

Gabriel: When I opened the door and saw Christeena, I knew I wanted to be with her. I loved her curves and big, beautiful lips. I tried to woo her all night.

Christeena: Later that night, we wandered around town. They used to sell roses on the street late at night, and Gabriel bought me one. And then he put his vest around me. I thought, Who is this guy? At the end of the night, he asked for my BBM.

Gabriel: We texted back and forth, and a few weeks later I took her on a date to a Moxie’s near my apartment.

Christeena: I ended up staying the night. Three weeks later, he told me he loved me.

Gabriel: I had gotten into horoscopes around that time. I’m a Libra and Christeena is a Leo, so we were a good match. 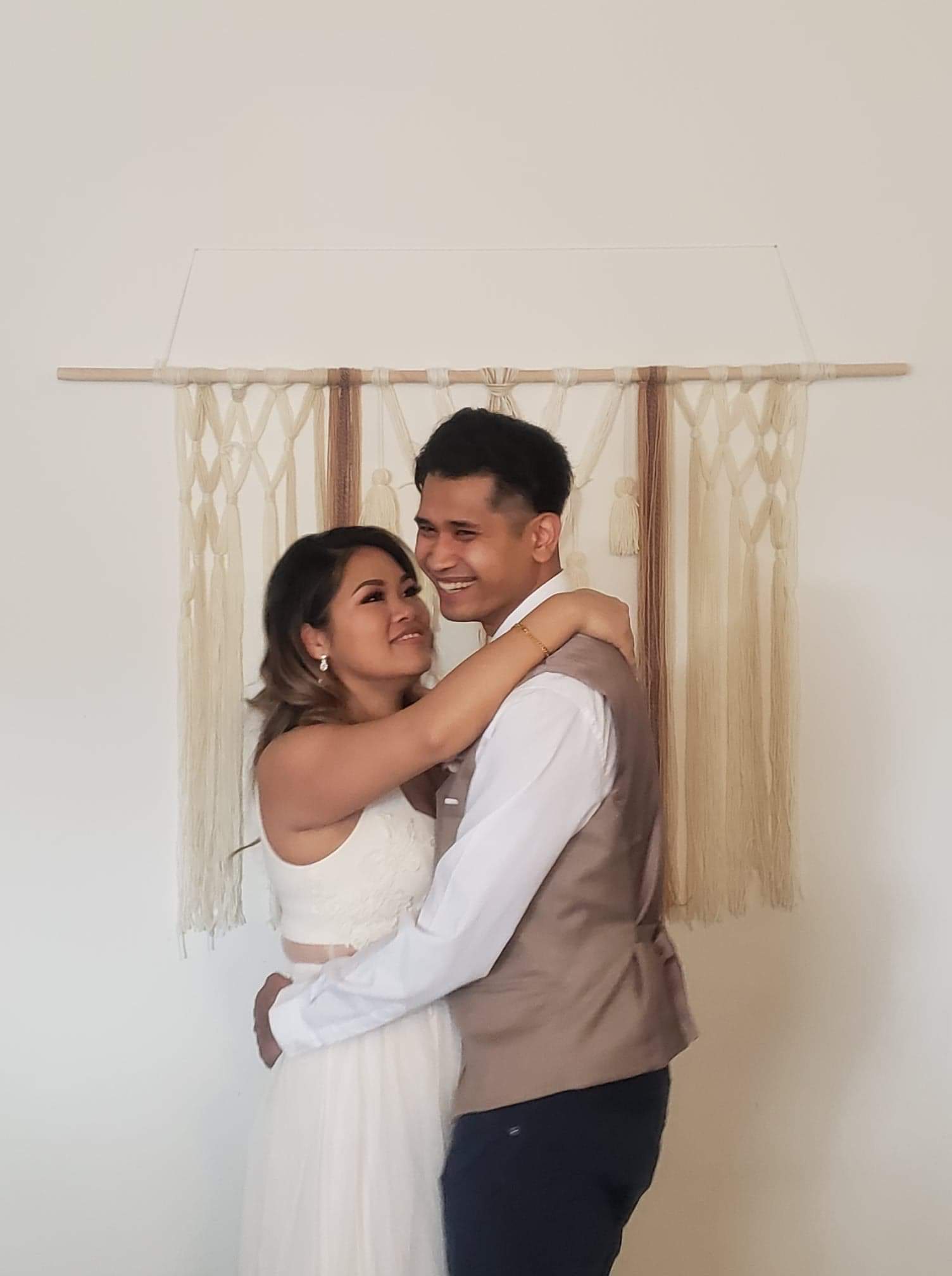 Christeena: For the first few months, I would go back and forth from Brampton to North York. Gabriel would take me on dinner dates, park dates, beach dates. I liked that he was making an effort. He is very social and gets along with lots of different personalities. That’s something I love and hate about him, though, because there are times where he needs to be quiet.

Gabriel: Christeena is more timid. But when something bothers her, she says it outright, rather than being passive-aggressive. I like that about her.

Christeena: Our eldest son, Nathaniel, was born in 2012. Sixteen months later, our second son, Elijah, was born, and in 2017, we had our daughter, Genesis. Having kids early made our relationship stronger.

Gabriel: Christeena continued to live with her parents in Brampton for the first few years. But eventually they moved up to a house in Alliston, and we all moved in together.

Christeena: Eventually, we sold the house and rented a place of our own in Alliston. At the time, we knew we wanted to get married, but weddings aren’t cheap and we needed to put our kids’ needs first. Then, we made some money with the sale of the house..

Gabriel: In February 2019, I felt like it was finally the right time to propose. I bought a ring, and we went on our first date in a long time. We went to Canyon Creek in Concord for dinner and then to a Starbucks afterwards. I didn’t have a plan for how I was going to propose. We got in the car after our date, and I said, “Wait, there’s one thing I want to do first.” And, I asked her to marry me. I didn’t get on one knee or anything. Maybe I should have. 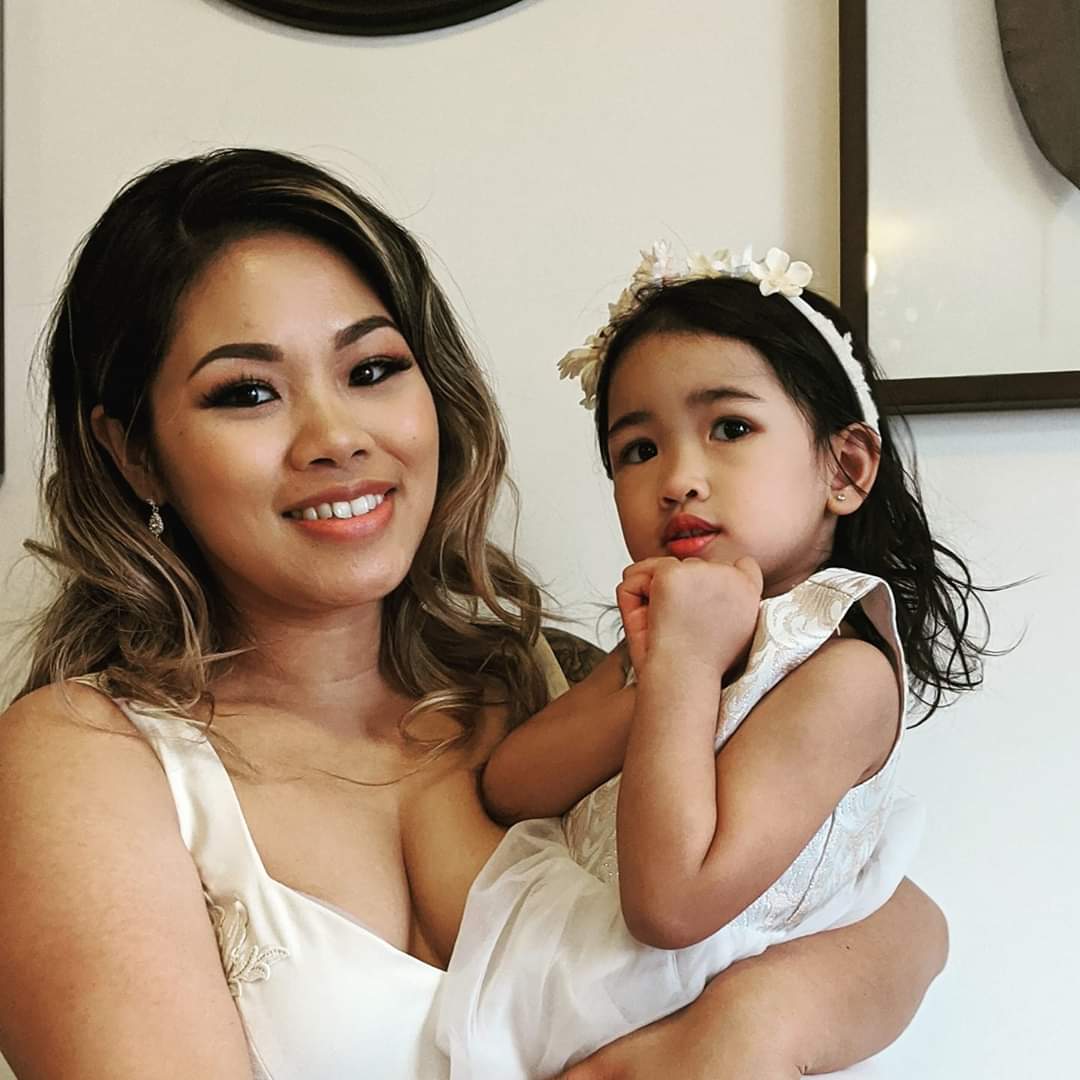 Christeena: I was excited to start planning our wedding. We had set aside about $6,000. I love doing DIY stuff, and I had a Pinterest board of wedding ideas. I wanted to create a boho, rustic, romantic vibe with modern details. We ended up finding a restaurant venue near us for our ceremony, and the reception would take place afterward at a community hall. The date was set for May 22.

Gabriel: I wanted to get married at city hall and call it a day. But I know Christeena had been thinking about her wedding before we even met.

Christeena: I had just paid the DJ deposit in early March when Covid hit. We were still optimistic for the first week. I thought, May is far away; things will be okay by then. But once they announced social distancing and said you can’t go over to peoples’ homes, we knew that was it. We cancelled our wedding on March 20.

Gabriel: Two or three weeks later, we heard someone in our neighbourhood got married on their front porch. Christeena reached out and got the name of their officiant. Our 10-year anniversary was coming up, on May 15, so we decided to get married the same day. We booked our ceremony for 5 p.m.

Christeena: I’d originally ordered a dress from Lulus.com—a spaghetti strap, mermaid-fit, white crepe fabric gown. But because of the quarantine, I couldn’t go to the gym, and the dress didn’t fit me as I would have liked. So I ended up getting another dress from Fashion Nova. It was under $100 and it looked great. It had a sweetheart neckline, a flowy tulle skirt and sheer bodice with floral appliqué. I put together a display table using a lot of the stuff I had made for the wedding. I bought fake flowers from Michaels, I found a free mini birdcage and refinished it, and I DIYed a floral headband for my daughter. I ordered Gabriel’s vest off Amazon so it would match the table decor. He already had the rest of his outfit in the closet.

Gabriel: My childhood friend Jomar Mercado was going to be my witness. Christeena’s best friend from elementary school, Tamara Provost, was her witness. The day of the wedding, Christeena and I stood on the front porch, and our witnesses and officiant were on the lawn in front of us. 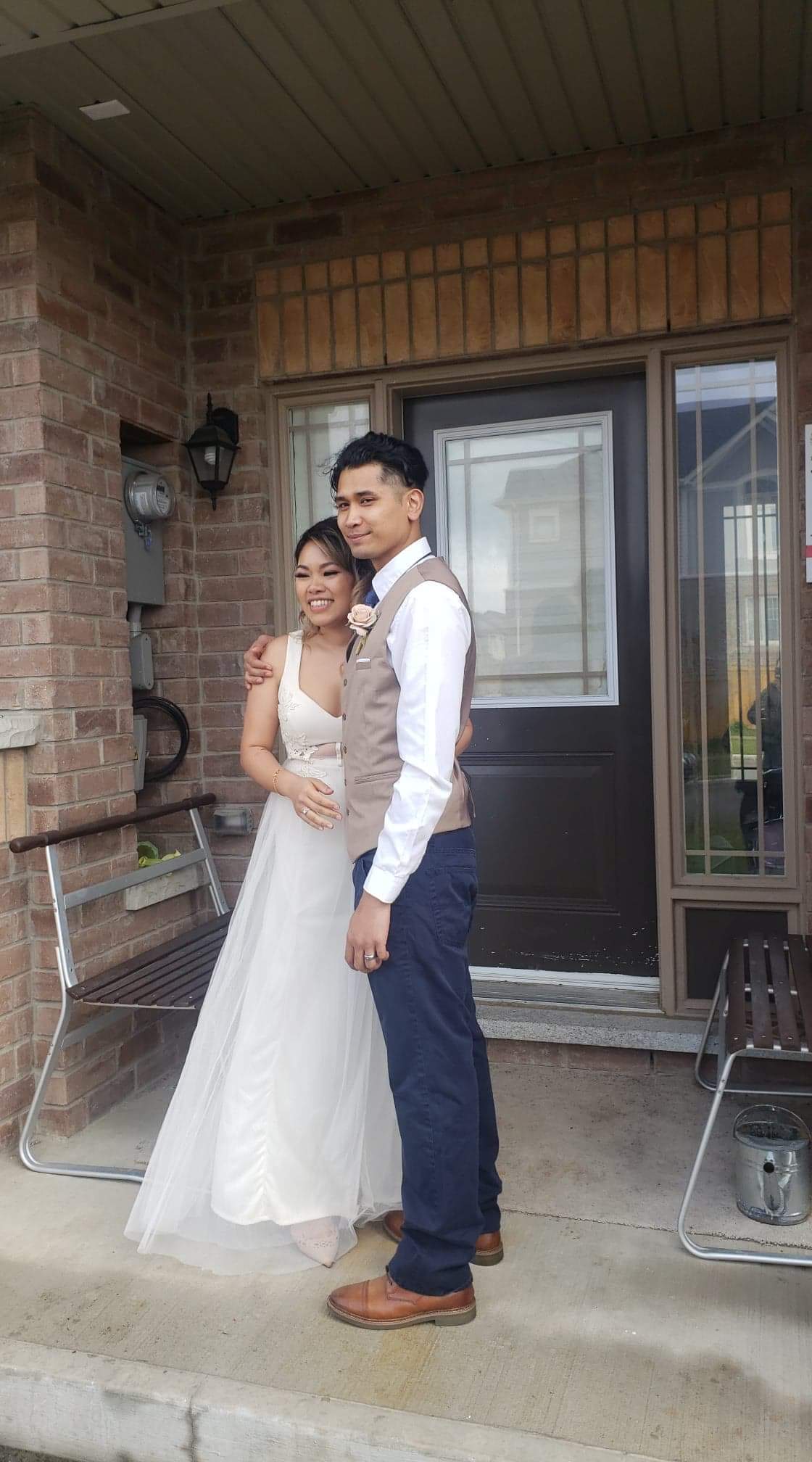 Christeena: It was raining hard all day. But right when our ceremony was about to start, the rain stopped and the sun started shining. It was perfect.

Gabriel: I liked that the wedding was on my front porch. It was intimate, and there wasn’t a ton of attention on us. Standing there with Christeena, I felt so happy and relieved.

Christeena: There was a lot of emotion in that moment. I didn’t picture myself blubbering and crying, but I did. Jomar was holding up a phone so that our family could join a Facebook Messenger call. Everyone was tearing up. It didn’t feel like we were missing out on anything.

Gabriel: The ceremony was pretty quick—about 20 minutes. We got married, signed the papers and went inside and had pizza for dinner.

Christeena: The kids stayed inside during the ceremony. Our son Elijah told us he didn’t want to see us kiss, and my daughter just wanted to eat cake. Jomar’s wife watched them them.

Gabriel: We took some pictures together and celebrated with Jomar and Tamara. We had lots of champagne. 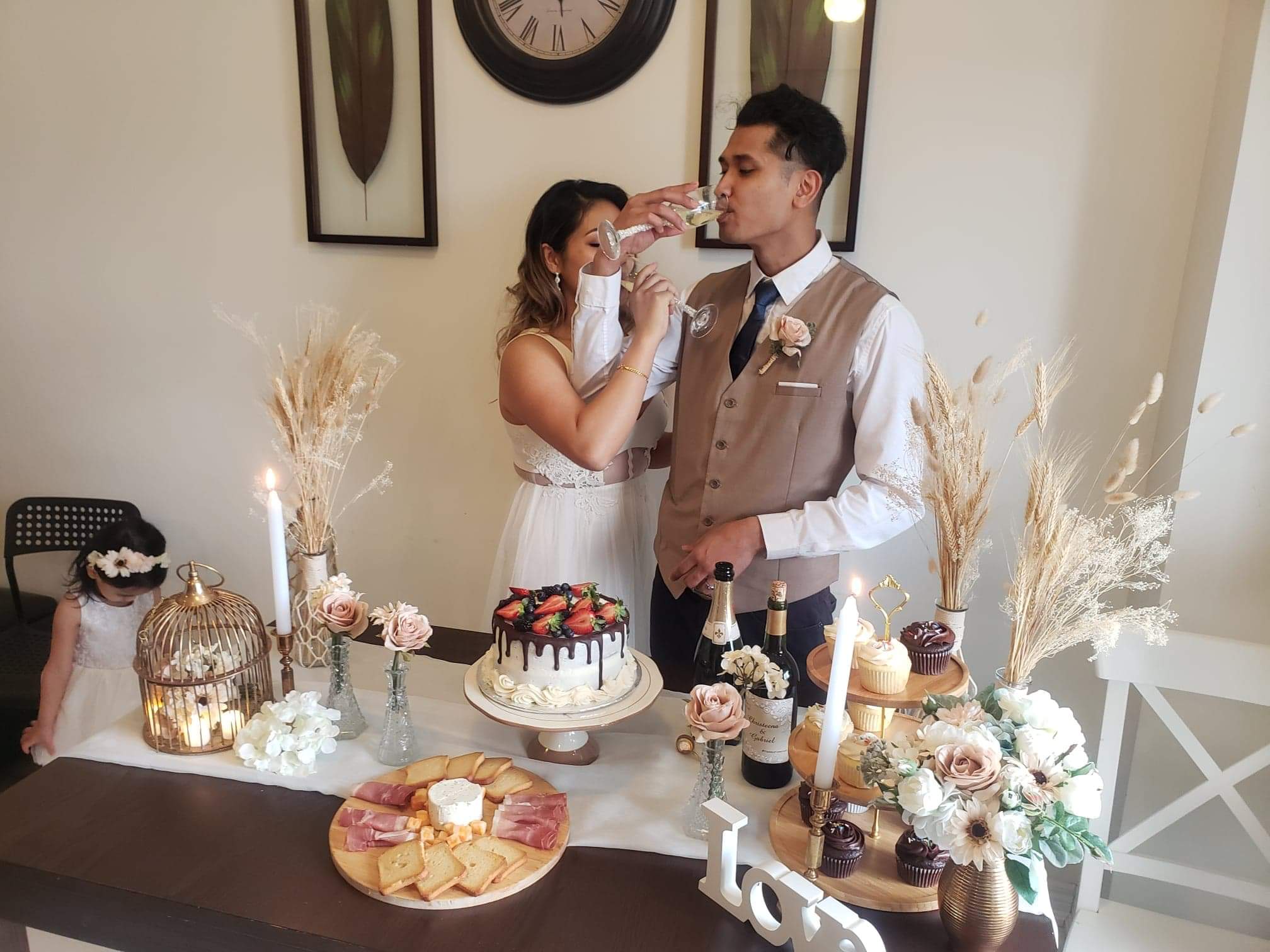 Christeena: It doesn’t feel much different being married. When I think of it, we’ve been doing everything backwards: we had multiple kids, lived in different houses and now we’re married. But it just works for us and feels right.

Gabriel: It feels great to call Christeena my wife now. I used to call her my wife anyway because it was just easier, but it always felt like a lie.

Christeena: We’re considering having a reception next year if things have cleared up by then. I haven’t put too much thought into it because it’s a lot of work if it gets cancelled again. I don’t want our deposits to go to waste.

Gabriel: I don’t mind not having a reception, but I can’t say no to my wife. So we’re going to have that reception.