After two years, $10,000 and hundreds of attempts to cure my rescue dog’s severe separation anxiety, I had to give her up

After two years, $10,000 and hundreds of attempts to cure my rescue dog’s severe separation anxiety, I had to give her up 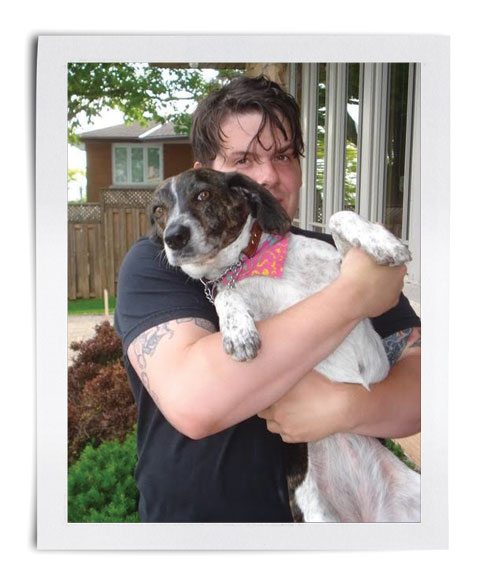 When I was 30, I decided to get a dog. Not just get. Rescue. I was a millennial without a spouse or kids or anything to keep me from a life of transience, and as a freelancer, I had plenty of time for a dog. I craved both the companionship and the promise of responsibility. I was also swayed by the pervading rhetoric of “Adopt, Don’t Shop.” The world is ugly and unfathomable. Making plain, clear-cut moral choices is more difficult than ever. Rescuing a dog seemed ethical, even faintly noble, in a way that seemed refreshingly uncomplicated.

I connected with one of Toronto’s many dog adoption ­agencies, who introduced me to Lilly. She was five years old: a beautiful, brindled beagle–Catahoula cur mix with a big ol’ head, weirdly human eyes and a wide smile. Lilly had spent the first years of her life at the Lee Arrendale women’s prison in Georgia, as part of a dog-grooming vocational program. The prison houses the state’s female death-row inmates and was briefly home to Shawntee Harris, a.k.a. Da Brat, who was put away in 2001 for beating a woman with a rum bottle during a dispute at an Atlanta nightclub. As with so many incarcérées, Lilly’s time in the slammer took its toll: her teeth were mangled from biting at the bars of her crate. When I first met her, her foster family tried to get her to do a trick. She ignored them, strutted over to me and licked my hand. I was charmed.

For a while, in the early days, I kept a document open on my computer indexing every name I called her: Princess, Special-Special, Scoobert Doobert, Freakshow, Dumbie, Dumbo, Ding-dong, Bing-bong, Dinger, Binger, Ding-a-Ling, basically any conceivable combination of ding and bing and ling sounds. When people—friends, neighbours, strangers at the park—offered compliments like “nice dog,” I’d shrug, all mock-humble. “Thanks,” I’d reply. “She’s a rescue.”

My life fell into a pleasant routine of early-morning, midday and late-night walks, of feeding and training, of belly rubs and ear scratches. The first two nights I had her, I slept on my couch, next to her doggy bed. I told her I’d help her and take good care of her. It is a cliché that dogs love unconditionally. But Lilly’s affections were fickle and hard-won. I’d attempt to play with her, or address her in a cutesy-poo doggy voice, and she’d just turn over, the canine equivalent of an eye roll. She was unimpressed with me, which I respected and came to adore. It wasn’t Lilly who gave her love without reserve. It was me. You really learn how deeply you care for something when you wake up at 4 a.m. to tend to a bout of explosive diarrhea.

The adoption agency had apprised me of Lilly’s separation anxiety, which manifested in drooling, howling, clawing, coprophagia (gross), escape attempts and an admirable ability to destroy any object of sentimental value, like a dapper paisley robe inherited from my deceased grandfather and an extremely cool book about witchcraft. Curing her became my priority. I approached it with equal parts military-grade seriousness and quasi-religious vocational zeal. I believed she had come into my life to teach me patience, to help me love unselfishly. In exchange, I would alleviate her fear of being alone. This wasn’t just something to do. This was what I was supposed to do.

I contacted a trainer, who provided me with a detailed plan of attack. This training lasted for 18 months. I had to desensitize Lilly to my absence and my departure cues. The idea was that I’d leave her alone for two seconds, then five, then 10, then a minute, then 10 minutes, and so on. Each day I measured her progress in an Excel spreadsheet. For me, these exercises seemed comically banal. For Lilly, they were useless. She’d stand at the door, panting, barking hoarsely, howling, pacing around. I was exacerbating her anxiety instead of helping it. After about a year, I could leave her alone for just under hour before she’d crest into full-on anxiety. My social calendar became severely limited. I focused all my energy on Lilly.

Her anxiety was a problem, I told myself. And any problem can be solved. All of my disposable income went to dog care: trainers, sitters, doggy daycares, a soothing white noise machine, various calming sprays and anti-anxiety medications, including Fluoxetine, a.k.a. puppy Prozac. Before long I had accrued nearly $10,000 in debt. Love is a weird thing, and sometimes the heart swells at such a pace that the head, that throbbing muscle of self-recrimination, can’t keep up.

Money drags like gravity—eternal, impossible to escape. Thoughts blasted through my mind. Could she have a better life with a family, or a couple, or other dogs? Could I imagine a life without her companionship? After months of anguished soul-searching and number-crunching, I decided I couldn’t keep her—that she might find what she needed in another home.

The agency dithered and spun their wheels. They could not find another home for her. For months I was told there were no fosters available. Their resources were tapped out, despite their constant social media advertising new rescues from Mexico, the Dominican Republic, even Egypt and Syria. They said I needed sterner training, or an indestructible crate from which she couldn’t escape. My anxiety curdled. The stress devoured my guts. I found myself crying spontaneously, losing sleep, beginning to resent Lilly, whose best interests were my only concern. “Nobody will be able to give Lilly the love you’ve given her,” the owner of the agency told me, in a guilt trip gussied up like flattery.

After a while, and with next to no help from the agency, I took matters into my own hands. I found her a suitable home at a dog sanctuary on an expansive farm north of the city—the most rambling, verdant place I’ve ever seen outside of a Hobbit movie. There, she may be rehomed once more: to a farm, or a family home, or somewhere where she’s free to bound about in the company of others, human and canine, and never feel alone again. I know she’s better off without me, but the first weeks without her were impossibly sad. There was no one curled up at my feet as I watch movies, no velvety ears to rub, no appallingly stinky messes to clean up. It’s not just that my well-intentioned good deed had backfired, or that my mini–moral mission to save a life had ended in me giving up on that life. My heart had expanded, only to be emptied out.

They say it’s better to have loved and lost. But sometimes I think about the way she’d lick my face when I earned her affections, or remember the way she used to wiggle on her back to scratch some unseeable itch in a floppy dance I used to call the doggy boogie, or the time her tongue lolled out of her head and she happier than ever after I put on that Prince song “Housequake.” I imagine some alternate universe where we are still together, where everything works out, where my ability to give her love matches the amount of love she needed, and, well, I just don’t know.

John Semley is the author of This Is a Book About the Kids in the Hall.