My name is Jess. I’ve used Tinder off and on for a few years. This all happened a couple years ago, when I was 32.

I was using the app one day, and I matched with a guy who seemed nice. We chatted, and he talked a lot about his career as a comedian. I thought, “Okay, that’s great. He’s passionate about his job.” I found that really attractive. Plus, I always thought it would be funny to go on a date with a comedian. Over text, he asked me a couple questions about myself. We hit it off.

Finally, after a couple weeks of chatting, we decided to meet up. I was feeling excited. He said, “Why don’t we meet at Starbucks, and we’ll go from there?”

The next day, I went to Starbucks, and I waited and waited. Fifteen minutes after we were supposed to meet, he texted me and said he was sorry, he was just getting out of the shower. He was like, “I’ll explain it to you when I get there.”

Finally, 25 minutes after we were supposed to meet, and with me on my second coffee, he arrived. He was wearing a logo t-shirt that looked like he’d gotten it free with a case of beer. It was ripped around the collar and around the hem. He had a leather jacket draped over his shoulders like a cape, and one of his shoelaces was untied. He looked like he’d just rolled out of bed.

In my head I was like, “Oh, there must be a good reason for this. Maybe he was attacked by a pit bull on the way here or something.”

We greeted each other with a hug, and he was like, “Hey, sorry I’m late. I had some inspiration for some of my comedy. As soon as I get an idea I have to sit down and write it.” That obviously wasn’t a good excuse, but I shrugged it off. We sat down and I offered to buy him a coffee.

And he said, “No, I don’t drink coffee. I only drink protein shakes.” He went on and on about working out and doing CrossFit—but he didn’t look like he did any of those things. He wasn’t overweight, but he was frumpy. I had to wonder if he’d even brushed his teeth.

I asked him, “Why did you pick this place if you don’t drink coffee? We could have done something else.”

And he said, “Oh, this is the closest place to my condo.” He pointed out the window at a building across the street.

I said, “You live across the street and you were like 25 minutes late?”

And he said, “Well, yeah. It’s great. I like making chicks come to me.”

I said, “So you just have all your Tinder dates at this Starbucks?”

And he looked at me and said, “Jeez, you sure ask a lot of questions.”

I was mortified. But I stayed. I decided I’d just finish my coffee and be polite, and then go.

In the meantime, the conversation continued. He didn’t ask me anything about myself. And then, out of nowhere, he told me he hates his family, and that he hates his mom the most. And I was like, “Surely you don’t hate your mom.”

And he was like, “Oh yeah. We hate each other. I don’t even call her mom. I call her by her first name. You don’t believe me?”

The next thing I knew, he picked up his phone and called his mom. He put her on speaker and said, “Hey, it’s me. I’m on a date. I’m telling this girl how much we hate each other.”

At this point, I started wondering: is this a comedy sketch? Is he doing this so he can use it in his show? Everyone in Starbucks could hear his mom on speakerphone. He was so loud.

Finally, she hung up on him. I got up to leave, but he was like, “Wait. Let’s just get down to business here.”

And he leaned into the table and said, “How do you feel about Coke cans?”

And he says, “Well, just imagine a Coke can.” And he pointed down at his crotch. “All circumference, baby.” I didn’t understand why he was telling me this.

And then he asked if I wanted to come back to his place. I could think of nothing I wanted to do less, but it occurred to me that this could actually be really funny. He had been such a jerk. My day was already wasted, and I wanted to see where this would lead.

We walked across the street to his building, rode up the elevator and walked down the hall to his door. He opened it, and he had these stupid little, really annoying chihuahuas, barking like crazy and biting his ankles and pissing all over the floor. He stood in the doorway and was like, “Are you going to come in?”

And I said, “I don’t know. I don’t want to come in until I know you’re telling the truth about the Coke can thing.”

And I was like, “I’m not coming in until you show me.”

I think in some sick way he thought that was really hot. And so, in the hallway of his condo building, he dropped his pants. And sure enough, he was right. I had never seen anything like it. I hope I never do again.

I got in the elevator. As the doors shut, I saw him in the hallway with his pants down, yelling, “What the fuck?”

He was repulsive, but also kind of entertaining. I never saw him again, but I did listen to his podcast a few times afterward. He talked about Tinder in one of them, and he was complaining about a date who asked too many questions. I’m pretty sure he was talking about me.

If you have a Tinder story, email us at tindertales@torontolife.com 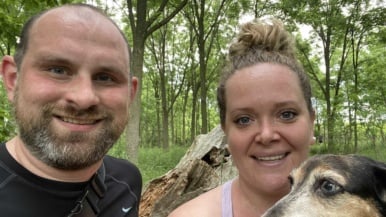 In May, feeling lonely during lockdown, Ryan Zade logged onto Tinder. Within a couple of days, he matched with Vicki Braide