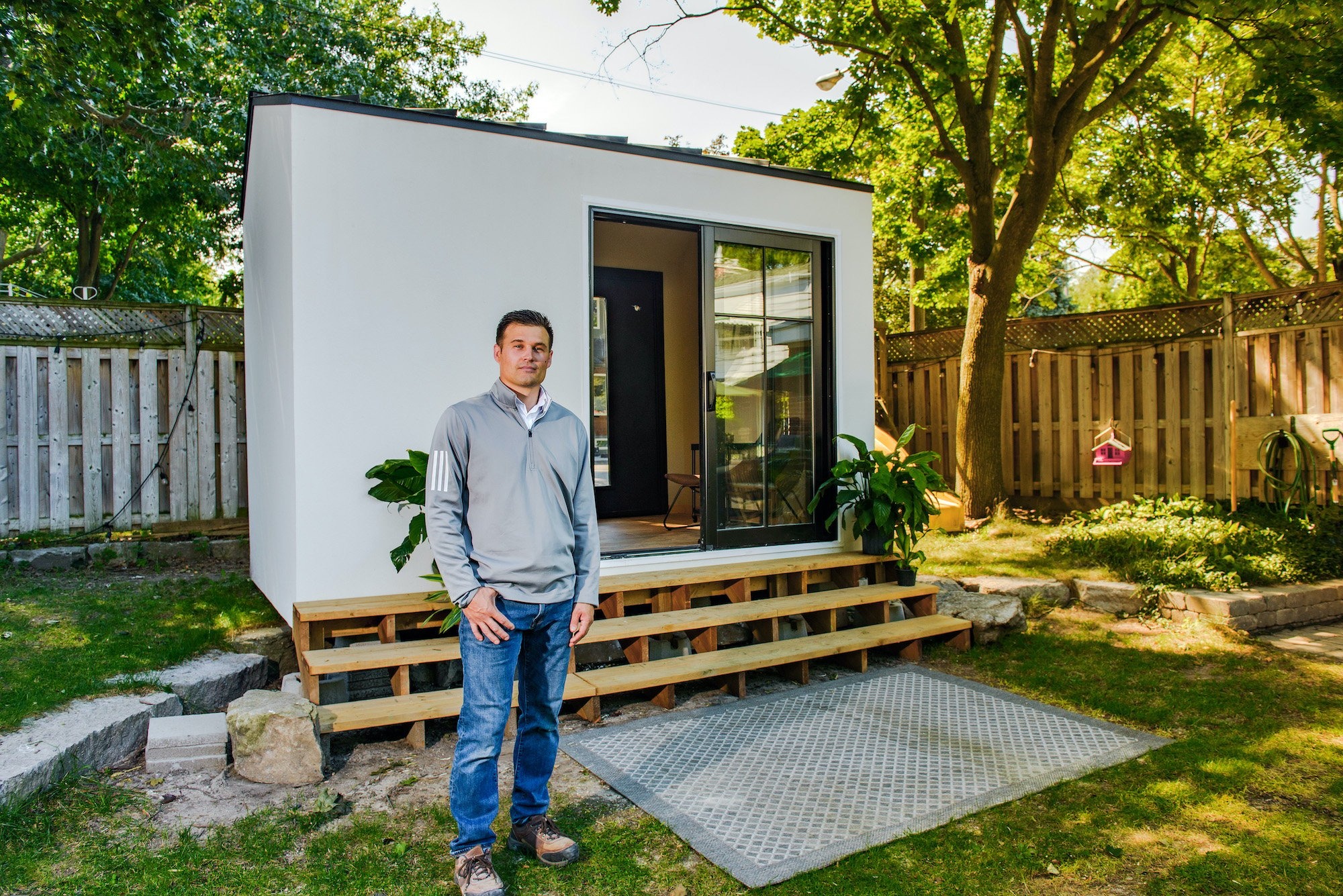 A year ago, Trevor Gilbert launched his construction company, Modeco Construction, focusing on building prefabricated modular bathrooms for apartment developments. When the pandemic hit, he and his wife, Brittany, were both struggling to work from home with their toddler. So he decided to find another use for his machinery and pivoted to producing prefab backyard office spaces.

“I studied green business and building practices at the University of Waterloo, and in the past I’ve helped retrofit notable Toronto buildings, including the Royal York and Scotia Plaza, to make them more energy efficient. My family also has a 60-year-old manufacturing business, so I wanted to bridge those two areas of expertise. I had been working on the idea for my green construction company for close to four years. In 2019, I decided to focus on one complex construction area where there are commonly a lot of challenges: bathrooms.

“I wanted to use a prefabricated manufacturing process for my bathroom design because I predicted modular spaces were going to take off. I wanted to differentiate myself from other suppliers with a push toward sustainability, and I put a lot of green building practices into the process. I designed a five-by-seven modular bathroom holding a shower, bathtub, toilet and vanity. My target customers were developers building for the rental market. Because the units aren’t going to individual condo owners, the developers don’t have to work with a million different fixtures and finishes.

“Modular design is the future of construction. The machinery has come a long way from its early days, and it’s gotten to a point where the quality is just as good as on-site construction. This way, I can take a lot of headaches out of developers’ hands and make decisions that can improve the whole process. When you build on site, you typically have to coordinate between trades and personnel like plumbers and electricians. A lot of defects and deficiencies in construction happen that way. By bringing the entire process offsite and into a factory, I control the quality. It’s also faster and cheaper. The bathrooms are shipped fully finished and installed once the foundation is laid. Before the façade goes up, they’re hoisted into place.

“In March, I imported my piece of machinery into Canada. It’s an extremely fast, precise roll-former that fabricates specific configurations of steel framing. I was working on getting it here for six months. I was trying attract enough business to justify the machine costs and to coordinate planned job starts. It arrived on March 10 and everything shut down less than a week later. Most of the builders I was working with put their projects on hold. It threw a wrench into my plans, much like it did everyone else’s.

“In the before times, my wife, Brittany, who works in HR, worked at an office downtown. I was at my facility in Brampton, and our two-and-a-half-year-old son, Jett, was in daycare in Etobicoke. When the pandemic hit, there we were, both working from home, trying to make calls while entertaining our son—all from our house in Etobicoke. It was impossible to get any work done, and we grew distracted and frustrated. I thought, It would be great for us to have a place to focus on work and create some separation from the home. At the end of May, I imagined an office pod that I could easily build with slight adjustments to my machinery. I spent two weeks planning, another two weeks designing, and then I started construction.

“My biggest hurdle was figuring out a quick and affordable way to build an energy-efficient wall and roof that could withstand the elements. It was a crash course in understanding which sustainable materials had the longest life span. I found a great local supplier of metal roofs that met my aesthetic tastes. The pods are made with light-gauge steel framing, and the exterior can be anything: for instance, in my home office studio, I’m using a specialized stucco finish. Other options are wood panelling or metal siding. Inside, there are typical drywall finishes, LED lighting and energy-efficient windows and doors from Pella.

“My office pod also functions as a quarantine hideout or a suite for guests, though we haven’t had any visitors yet. There’s a slide-out bed with a full-sized mattress, and I built a climbing wall for Jett. There’s also a blank wall for a screen or projector for virtual meetings. There are two entrances: a sliding door to our backyard, and another access door to the street, since we live on a corner lot. The whole structure is eight by 12 feet; anything under 10 square metres doesn’t require a building permit, so that’s the limitation for what I can build. The idea is to put a ceramic heater inside during the winter, but I don’t need it yet. 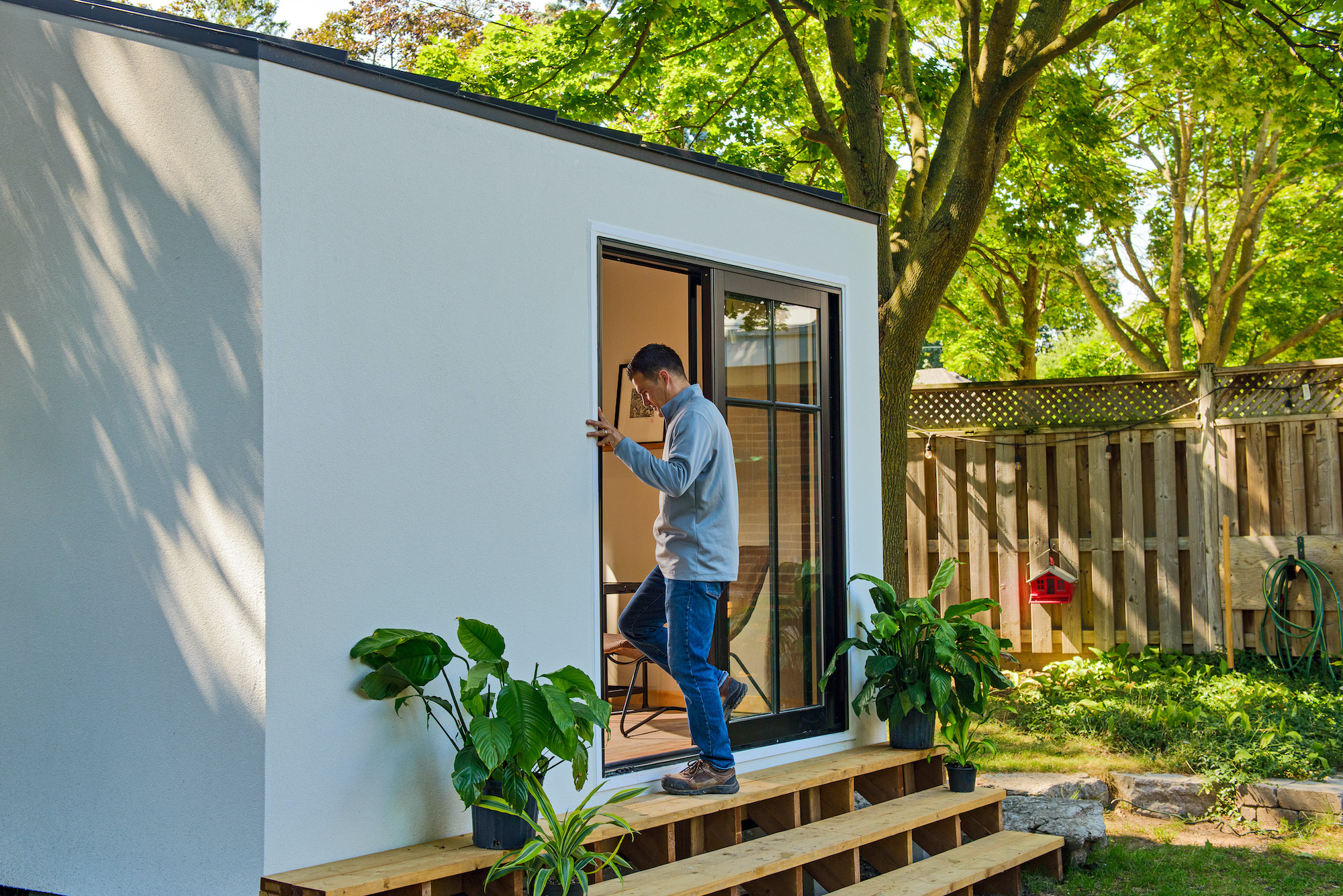 “Now, I’ve added the prefab office studios to my website. For customers seeking their own pod, the design and construction process takes about four to six weeks, and the installation takes three days. Prices start at $7,500 for a basic eight-by-eight model with finished interiors, lighting and electrical, and go up to around $25,000 for a larger, more elaborate setup like what I’ve made for myself, with its own HVAC system.

“My neighbours have started taking notice of the studio. They’ll stop by to see what I’ve been working on and ask questions. On top of taking office requests, I’m also building a neighbour a custom bar and shed. People need drinking pods, too.”