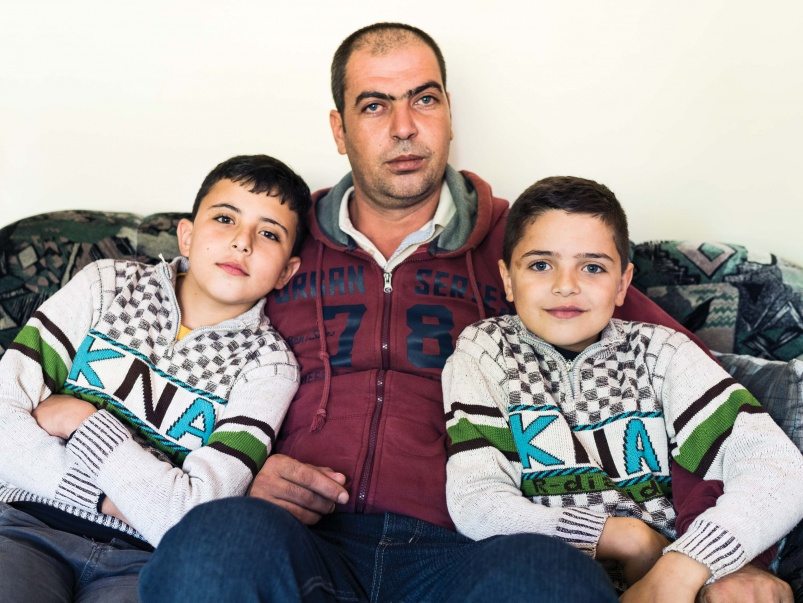 How one Syrian family found asylum in Canada

The rooms in Studio 6, a two-star hotel near Bathurst and Dundas, are small and sparse—and they’re what a number of Syrian refugees currently call home. The Al Qiblawis and Al Jasims spent years in Jordan before the Liberals opened Canada’s doors in December. They arrived in Montreal on January 10, along with hundreds of other refugees from Amman, and flew to Toronto the next day. As they wait for the government to provide a more permanent place to settle, they’re living in limbo. We spoke to them in Arabic about Syria, Jordan and their future in Canada.

When did you learn you were coming to Canada?
I actually intended to go to the U.S., and I was interviewed by immigration officials [many times over] two years.

And nothing happened?
Every time they talked to me, they’d say, “It’s pending, stuck in red tape.” Then Canada came for me. I was so happy. I knew there was more work there than in America, and no racism. Even if they told me I could go to America, America was over for me.

What had you heard about life in Canada?
I knew Canada was very multicultural. I had friends who’d been in Canada and came back. They told me about Toronto and that work there was good and secure. As for the cold: cold is better than humiliation. The Syrian people have been destroyed psychologically, destroyed physically. No hope remains but the hope of getting out to live with dignity. Once I arrived in Canada, I found my dignity right in front of me.

What’s been the hardest part of the transition?
The language. We want to get to know the city. We want to go out and familiarize ourselves with the people and places, but the language barrier doesn’t make it easy. We have to buy things using sign language.

How long are you going to stay at this hotel?
We don’t know. We’re just waiting to hear from the government. It’s a disturbance for the other guests, with the kids playing and crying.

What kind of work do you want to do now that you’re here?
I could be a truck driver or work with tiles, granite. Any work I can get, really.

What are your hopes your first year in Canada?
We want security. We want work. We want to turn a new page in our lives for our children. The most important thing for us is our children’s future. Here, my children will be educated; in Syria, sixth or seventh grade is all you get. After that, the child has to work because of how bad things are.

What do you want people here to know about what’s going on in Syria?
In Syria, there’s no family that hasn’t had a wake. There’s no home that hasn’t grieved. I lost my brother Nasser in a bombing. For me, Syria is gone, dead. I buried Syria with Nasser.

What have you seen of Toronto so far?
We haven’t seen much yet, but my brother Shadi and I did go on a trip to Niagara Falls.

What challenges have you faced since arriving?
They initially assigned me to Vancouver and Shadi to Toronto, which would have put a five-hour flight between us. We said that wasn’t going to work. We needed to stay together to make being in this new country easier. For the time being, they’ve kept us together.

Why are you living in a hotel?
They’re going to distribute us to houses, but we’re following a program and that takes time. We need to follow the routine until they organize all our affairs, until they find us a house, or perhaps until we start looking ourselves. They told us that, by the end of the month, they’d find us houses and give us a fund that will, God willing, last us a year.

What was life like for you in Jordan?
We went to Jordan illegally, through the border with Syria. The Jordanian forces took us to Al Zaatari refugee camp. We couldn’t stand being there more than 14 days: the living conditions were terrible; it felt like it was like -100° C. We ran away, illegally, and lived in in an area called Al Ramtha for nearly three years. We suffered from water shortages. Luckily, I managed to find work laying tiles, but Jordanians immediately complained that I was taking their jobs. At noon on my very first day, the police arrested me and told me either I go back to Syria or sign a document vowing not to work in Jordan. They said that aid would come in to help pay for rent, food and water, but the aid never arrived.

How did you take care of your family then?
I was forced to work at rural chicken and sheep farms, where the police wouldn’t find me. I worked in secret just to have food, water and shelter. We don’t know how we managed to endure for three years in Jordan.

What kind of job do you want to get here?
I spent a long time working with tiles and cement, which has given me hand eczema. I can’t do it anymore, so I learned to sew. There’s no dust, nothing to harm my skin, just thread and bedding and making patterns and designs. God willing, I can make a living doing it here.

What do you want Canadians to know about the situation in Syria?
Alan Kurdi washed up on the beach, but there are countless more who vanished in the water. These are the families that no one knows about. Not only are these people unwanted by the country they were trying to migrate to, they are unwanted [where they’re coming from].

How do you feel being here now?
I want to thank the Canadian government. It has safeguarded our future. But our biggest gratitude is for the reception we received at the airport from the Red Cross, who clothed us and our children. They snatched us up from death and brought us to life.

Why did you leave Syria?
Shadi: I lived in Al Qadam, a neighbourhood at the edge of Damascus with a high proportion of Alawites loyal to the regime. Many of them were dear childhood friends of mine. I’ve never held a grudge against them, but there were Sunnis who were so angry with them that they burned down their homes and stole their belongings. The Alawites who’d fled cooperated with the army to get revenge. One day, an Alawite friend of mine phoned me, told me to get out of the area and hung up. There was a strong friendship between us. It didn’t matter that I was an “enemy.” I left and, an hour later, heard the news. They burned down the first and last house in the neighbourhood. The army started going door to door, entering each house, burning anything that moved. When the troops got to our house, [my brother] Salih was hiding inside. If the troops hadn’t got a radio call ordering them to leave their position and go to another neighbourhood, he would have been among the dead.

What did you know about Canada before you came here?
Shadi: When I was told I might be going to Canada, I started researching it on the Internet: the weather, the best cities, work opportunities, refugee services. There were rumours that once you arrived in Canada, you’d be given a sum of money to start with, but I couldn’t verify them anywhere. I thought we would come here and have nothing.

Have you gotten that money?
Shadi: Yes, [a few days ago]. We’ll secure houses and then get monthly stipends for a year.

What has the transition from Syria to Canada been like?
Mona: Life in Jordan exhausted us. We had nothing material to hold on to. There was no work—it wasn’t allowed—and it was hard to just feed our children. Now that we’re in Canada, life is heaven.
Shadi: Before the uprising, life was good in Syria. Everything was affordable. But there was no personal freedom. You couldn’t express your opinion, there was no respect for human rights and the secret services could arrest someone for no reason, and that person would vanish. If you overhear the wrong conversation, they’ll take you. In Canada, if you obey the law, everything is open to you. There is diversity in religions and opinions. There’s no struggle for life, to make a living.

What challenges have you faced since arriving here?
Shadi: We’re suffering from medical issues. We’re forced to wait for hours at the hospital, and when the doctors and nurses see we’ve come from an Arab country they worry about the diseases we might have. Our illnesses are due to the change in climate; we got colds immediately after arriving. I’m keeping the children in the warmth of the hotel to avoid that, but when the snow falls, we can’t stop them. They went out the other day to play in the snow. They’ll adjust quickly at this age, once they befriend Canadian children.

Do you still have family in Jordan and Syria?
Mona: Yes, many relatives, sisters, cousins. I have a brother, Ahmed, who has been missing for two years. He has a wife and two children. The regime took him away at 3 a.m. one night, right out of his bed.

Why did they take him?
Mona: We don’t know. He never went to protests or caused any problems. My sisters went looking for him and were told his name wasn’t in any of the prison records.

What are your hopes for your first year in Canada?
Mona: We heard Canada has plenty of work and good education, so that’s what we want to start with. My children will have a future here. We want them to learn English—and us as well, God willing.
Shadi: Even if we pass the courses, we want to take them again and again until we’re fluent. I want to create a secure and stable life for us. After four years, I want to get Canadian citizenship, and I will vote for Justin Trudeau.

How have the children adjusted so far to Canada?
Shadi: [When we arrived,] Abdullah, [my youngest son,] was asking me when we’re going back home. I think he’s finally convinced we’re not going back.

Would you ever go back to Syria?
Mona: Syria is in ruins. We can’t go back. We couldn’t secure anything for our children in Syria. All their games became war: they’d ask me for toy guns to play with. Killing, shooting—that’s what they wanted to play.
Shadi: From my point of view, Syria won’t work out. Look at Libya: Qaddafi fell, but the problems are still continuing. I predict it will take 20 years of fighting and another 10 years of rebuilding for Syria to be stable. I’ll be 70 by then. Maybe then I’ll think of going back. But, for now, why should we waste our lives?