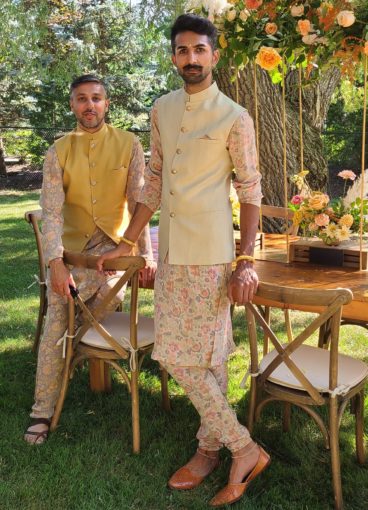 Inside a zero-waste same-sex backyard wedding

Parimal Gosai, managing director at Gosai Law, and Hasheel Lodhia, a musician, met on a dating app seven years ago. Their families had planned a big wedding with more than 400 guests. Though the wedding’s size was reduced to 30 guests as a result of the pandemic, they were able to keep their original date with an intimate celebration in a Richmond Hill backyard. Here’s how it came together.

Parimal: In 2013, when I turned 32, my friends practically pushed me on OkCupid to find a partner. That’s where I met Hasheel, who was 25. I messaged, “I know you’re probably way too young for me, but you play bansuri”—a classical Indian flute—“and I would like to have some music in my life.” Hasheel invited me to one of his performances. I left a party at my house early to attend his concert.

Hasheel: After my performance at an outdoor venue in Toronto, I was looking out for him in the audience when I got a text message that read, “Hey! You were really good! I’ll see you later, thanks for inviting me.” He was about to take off without meeting me!

Parimal: I was nervous; he was very good at what he did. We ended up meeting for tea and talked for about an hour. The minute he told me he loves garba—a traditional group dance—it became very obvious to me that he was the one. With Hasheel, it was our mutual admiration for our culture that worked. 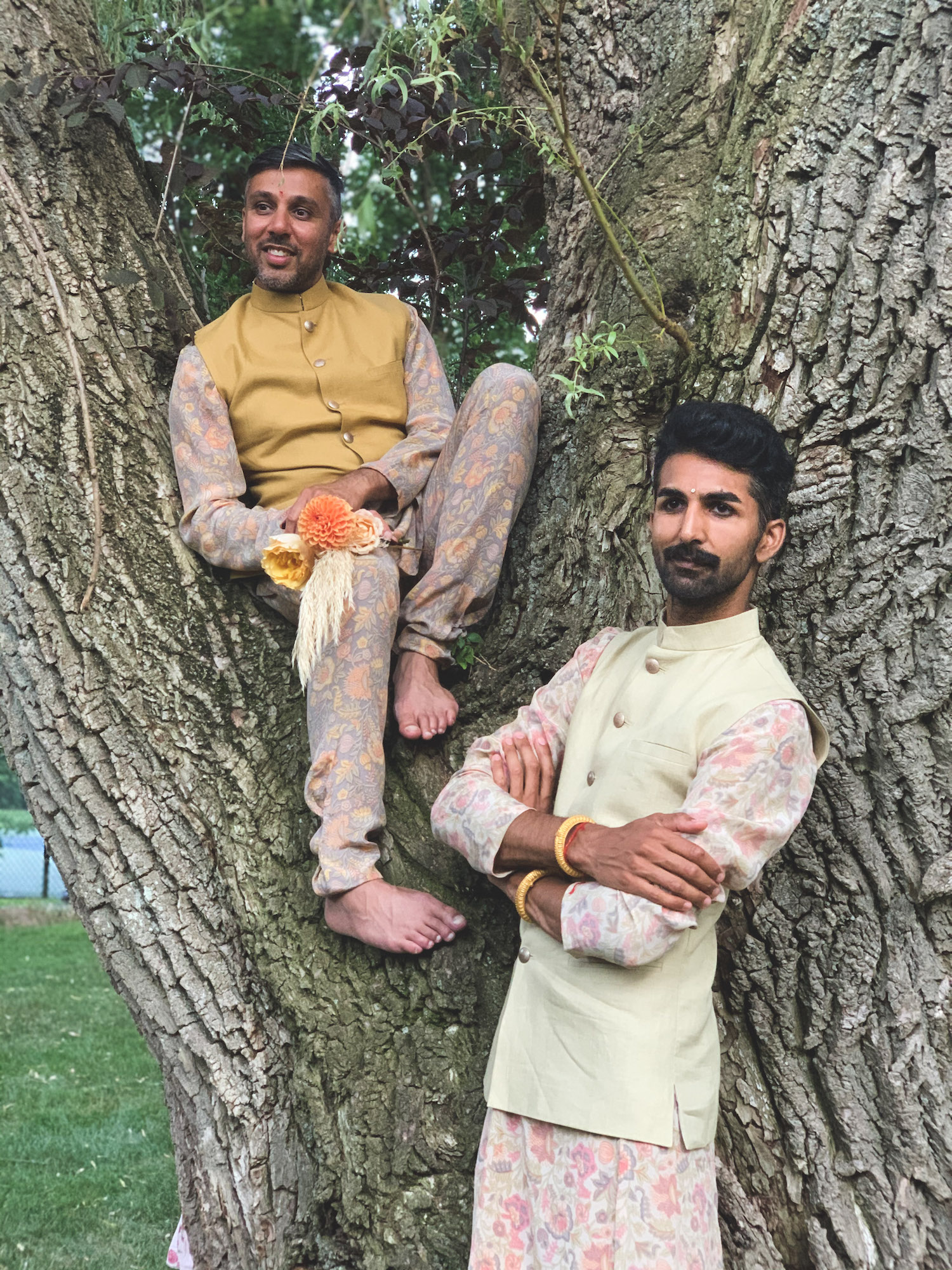 Hasheel: The moment we both fell in love was on our fourth date, during a gig I had in New York that I invited him to. We went to this huge garba celebration in Jackson Heights. As soon as we started dancing together, I was his. There were so many things that were unspoken and yet understood.

Parimal: I proposed to Hasheel at my birthday dinner in July 2019. I invited our closest family and friends and printed a letter on the back of each person’s menu. Halfway through dinner, I asked everyone to look at the back of their menu and unscramble the message. It said “Hasheel, will you marry me?” That’s what I wanted for my birthday.

Hasheel: I wasn’t anticipating it. I ran an event planning and decor company at the time, so the day he planned the proposal, I was preoccupied because I had a huge job outside of the city. My dad was so impressed with Parimal’s gesture and how he got the whole family to ask the question. All of our parents are very involved in the temple and, barring initial hiccups, they have been very receptive of us. I came out to my parents when I was 19. Things were on edge for a couple years, but my parents put in the work and educated themselves, and I know they are very proud of me. I teach Sunday school at the Vishnu Temple in Richmond Hill, and since I came out, three students from my class have come out too. 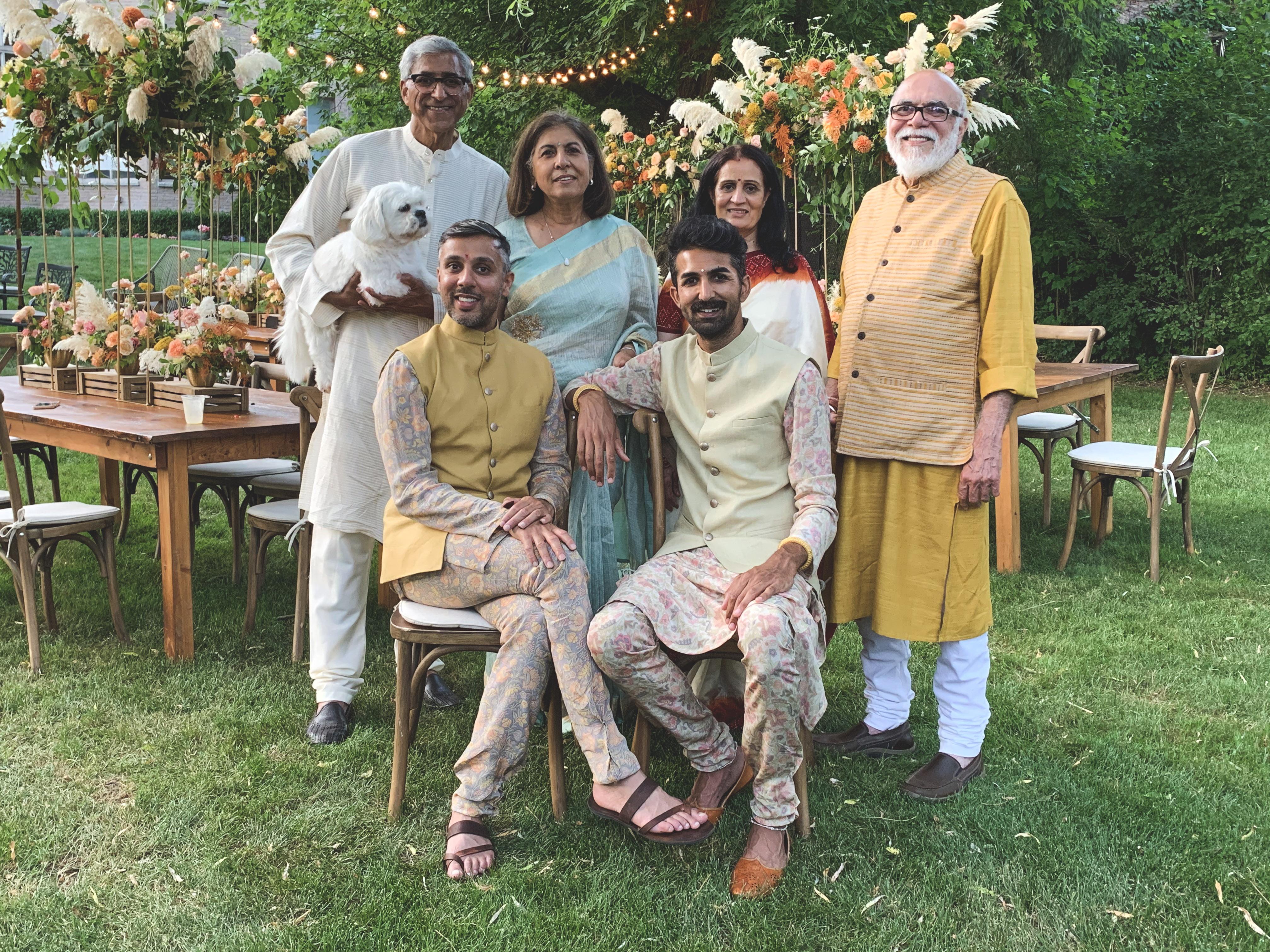 Parimal: Our families went berserk after the proposal. Hasheel wanted a small ceremony in his parents’ backyard but our families said our wedding shouldn’t be any less extravagant than our cousins’ or siblings’. Though things are changing gradually, some people from our community are still very conservative toward the LGBTQ community. I identify as a queer-feminine gay person, and didn’t initially relate to the idea of marriage. Even though same-sex marriage is legal in Canada, the idea of marriage stems from a deeply rooted patriarchal system, which to me is oppressive in many ways. On the flip side, I realized how important it was for us to get married because it creates visibility for people like us.

Hasheel: We started planning our wedding for summer 2020. We booked the Symes for the ceremony and the Drake Hotel for our reception. The menu was a vegan feast called thali, and all of the flowers, including marigolds, were sourced from a friend’s local farm. My mother and I went to India in early 2020 and ended up ordering outfits for the entire family, but we struggled to find something that spoke to Parimal and me. A lot of the same-sex weddings that we’ve seen look like two straight men getting married. For us, it was important to show our femininity, too. All of the beautiful embroideries and fabrics were only on the women’s clothes. We decided to work with Payal Singhal, a Mumbai-based designer, to customize our wedding outfits. For the mehndi night, a pre-wedding ceremony with dancing and henna, we bought flowy silks that we tailored into matching tops and pants. 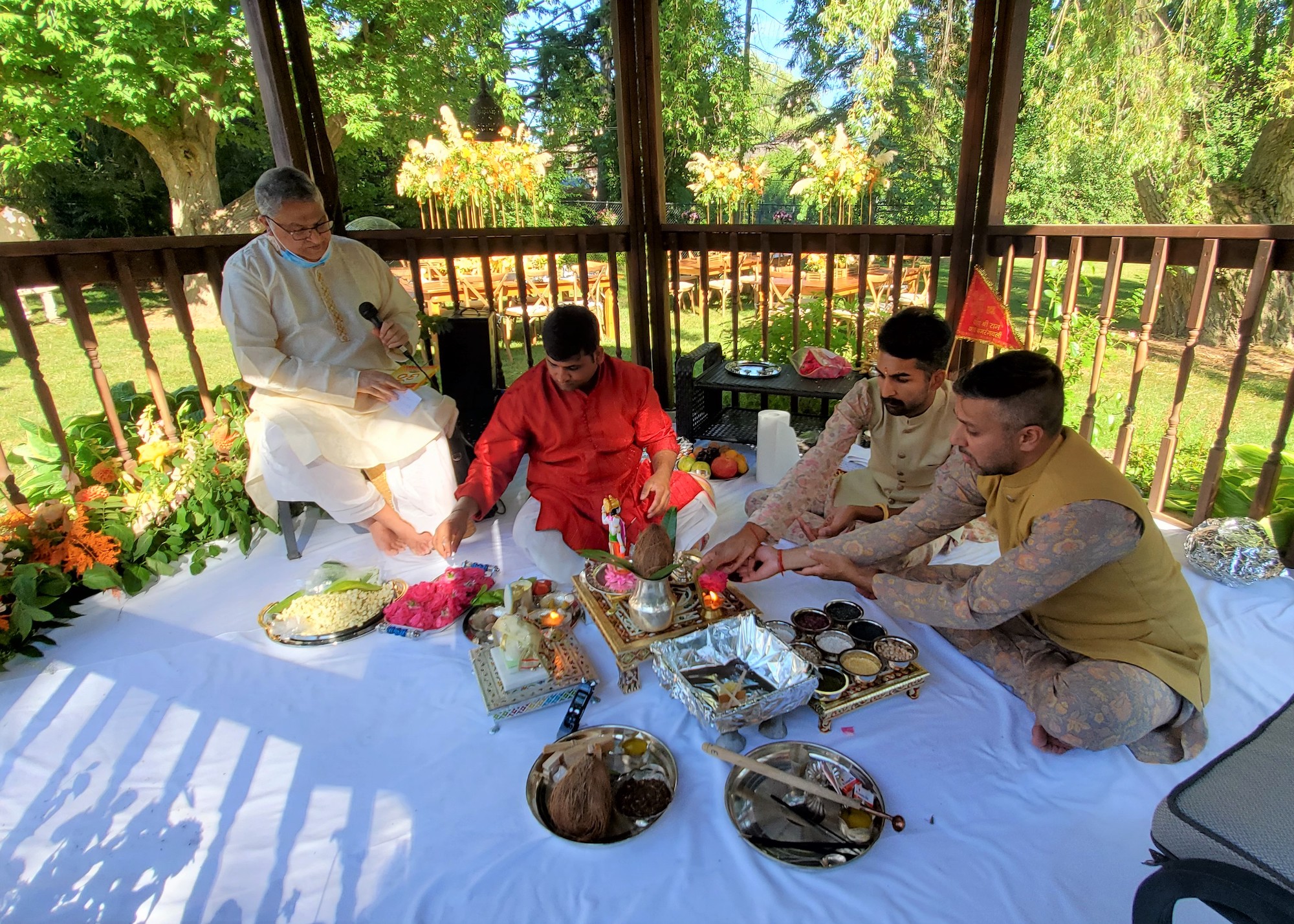 Parimal: A little while after we sent out save-the-dates, the pandemic ramped up. We had to send out a second notice that said we were holding off on the big events and might do something smaller. Both venues were gracious enough to return our deposits when we cancelled. Early on in the pandemic, city hall was not giving out licences, so we didn’t think our wedding was possible. A week before our original date in July, our wedding coordinator, Annmarie Borosic, managed to arrange a licence application in Mississauga. That’s when we decided that we still wanted to get married on our original date. It also happened to be Guru Purnima, a religious festival. We planned our wedding in one week, in Hasheel’s parents’ backyard.

Hasheel: I’ve always considered my parents’ house to be a very spiritual place. Over the years many religious teachers have come and stayed with us. There is also a gazebo that my brothers and I constructed ourselves, which was a perfect spot for our wedding.

Parimal: We wanted 100 per cent waste divergence, so everything in the wedding was compostable or recyclable. We called off the embroidered wedding outfits and decided to wear the outfits originally meant for our mehndi night. Our original priest, Anantanand Rambachan—a professor of religion in Minnesota who has officiated many same-sex weddings—couldn’t make it because of the Covid travel restrictions, which was disappointing.

Hasheel: For the day, we did a small religious ceremony performed by my family’s local priest, followed by the civil ceremony. It was the perfect day—it ended up being exactly what we originally wanted. My brother and sister-in-law were in town from India, and it was special to have them by my side. We didn’t hire a photographer and asked our family to send us their photos later. The new menu was more relaxed, vegan street food: bhel puri, samosa chaat, channa bhatura, pav bhaji, jalebis, mango lassi and chai. Our family brought South African cakes for dessert.

Parimal: After the ceremonies, we sat in a big circle around a campfire with our immediate family. It was a very relaxed vibe. We still don’t know if we’re going to do something bigger next year, but it was a perfect day, and I don’t think it could have been any better. 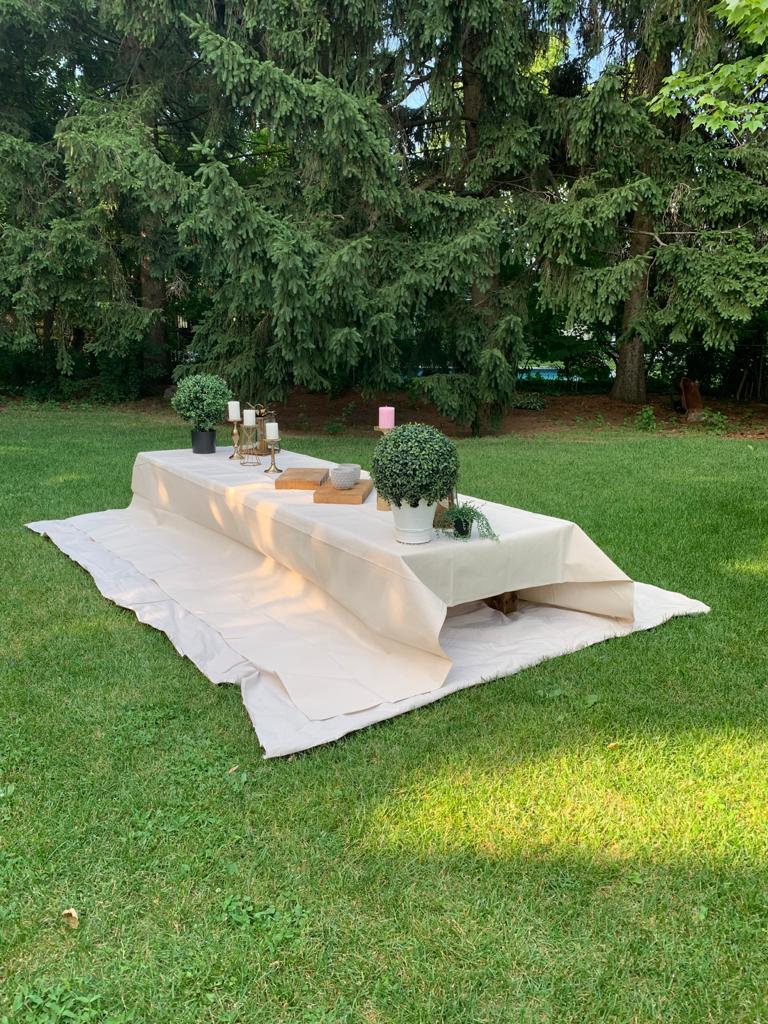 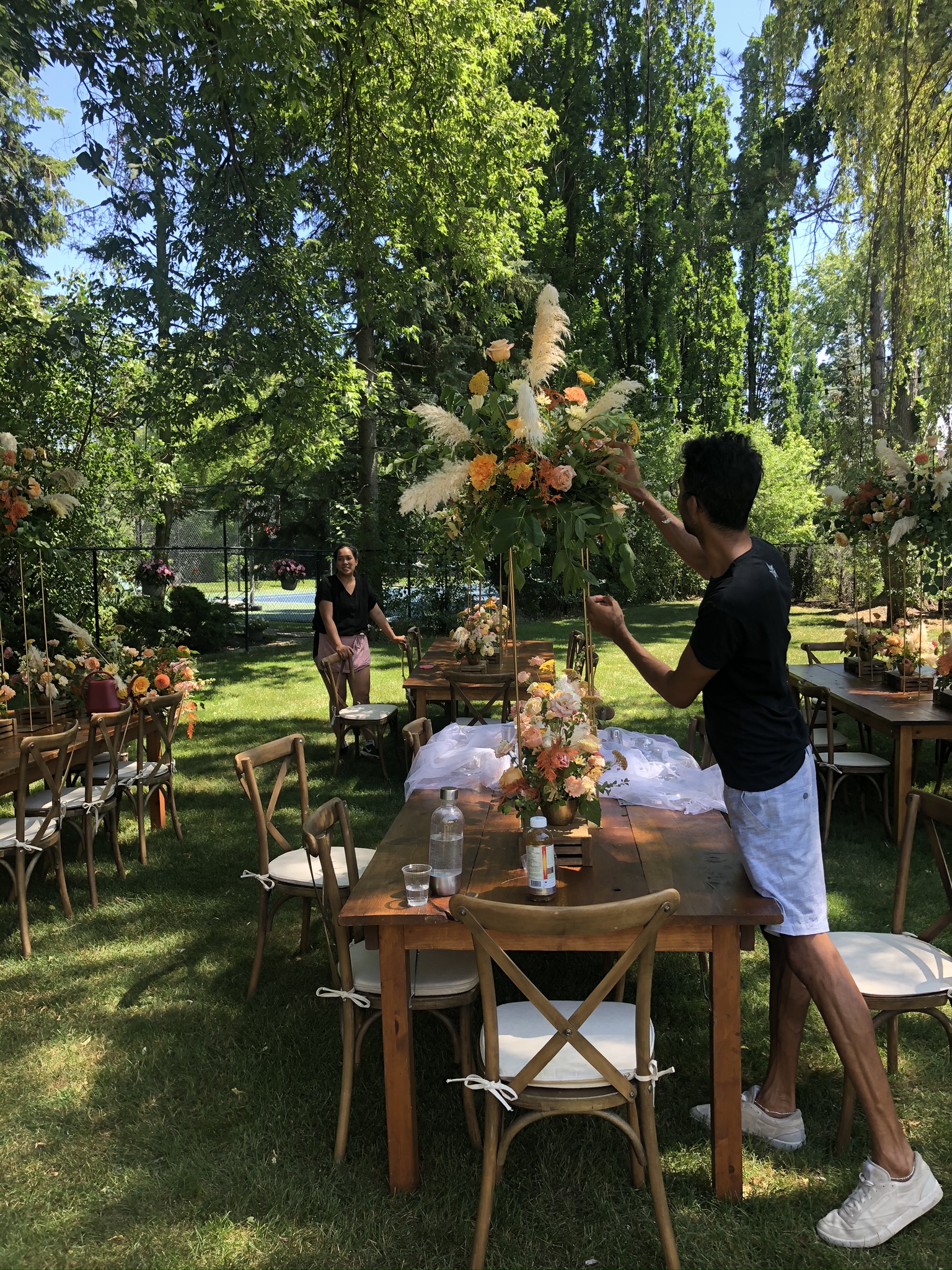 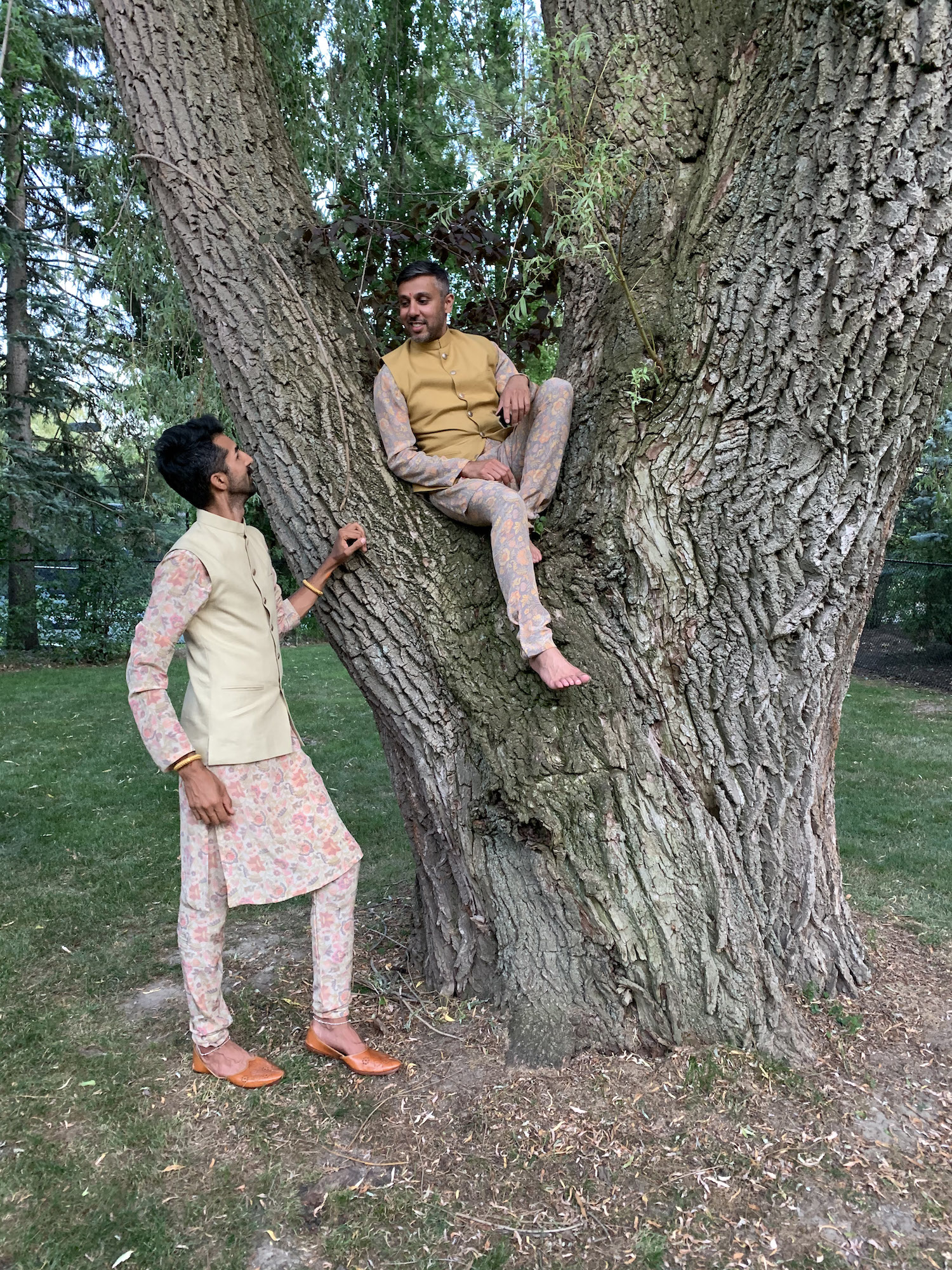 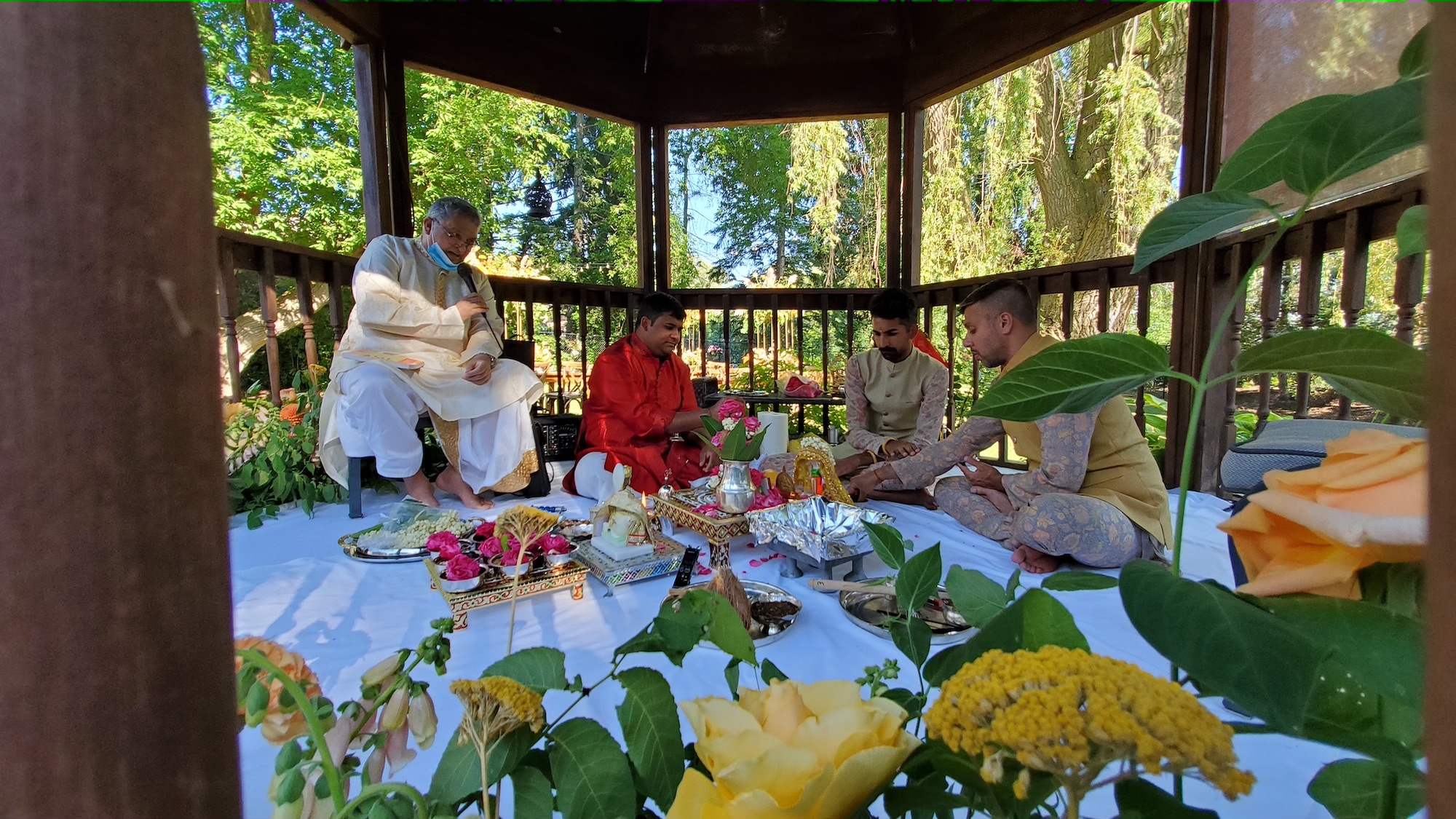 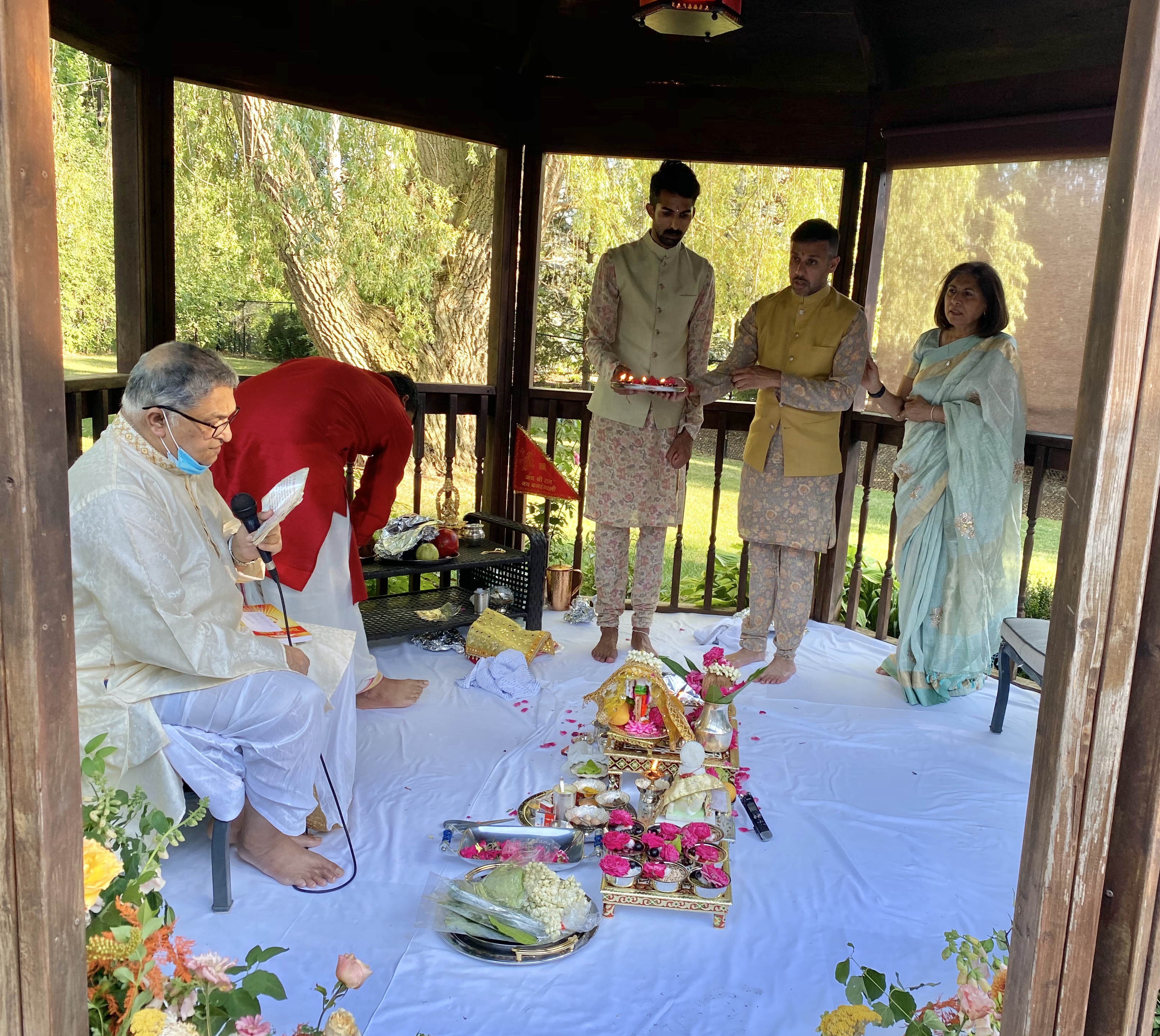 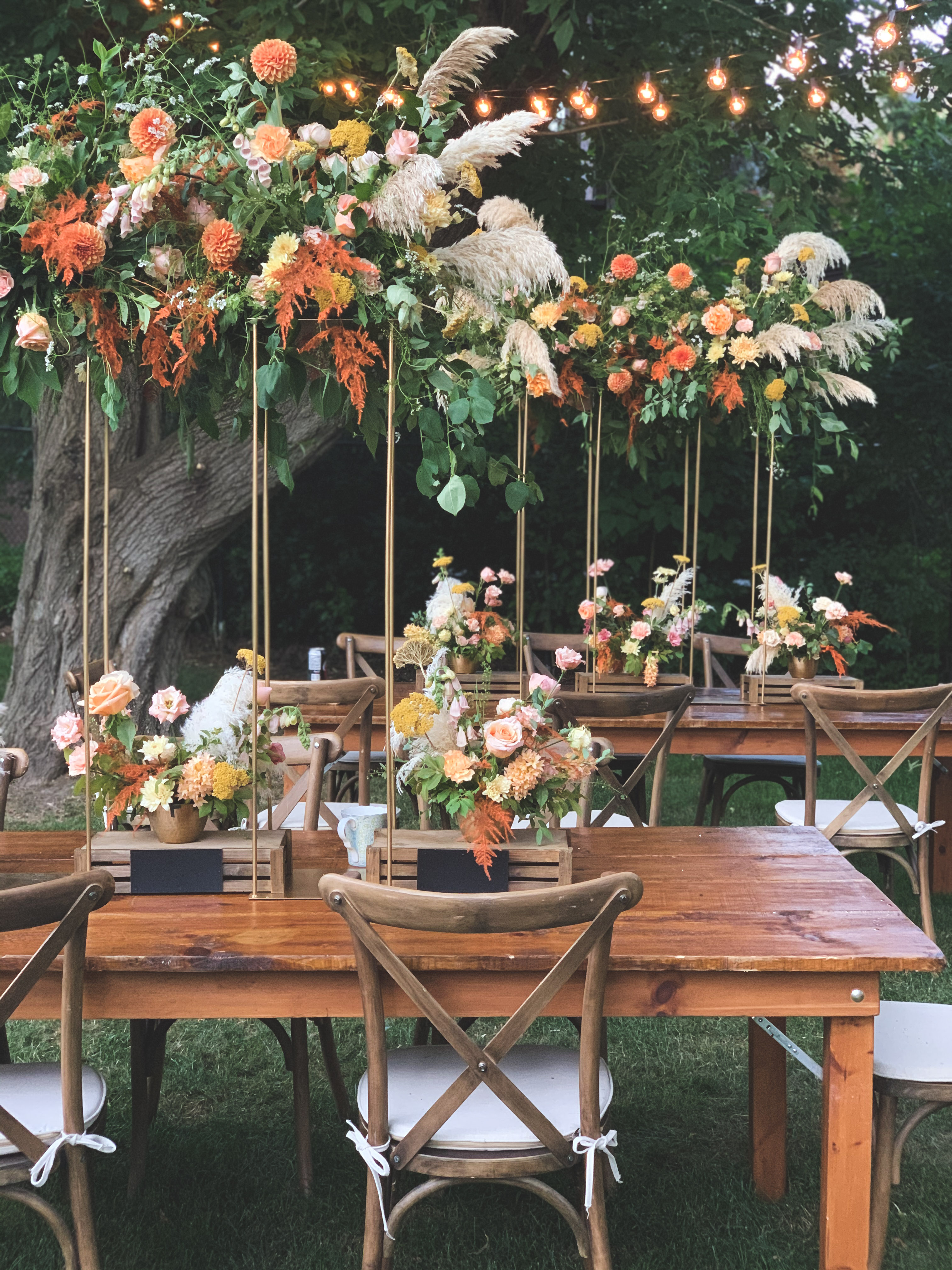 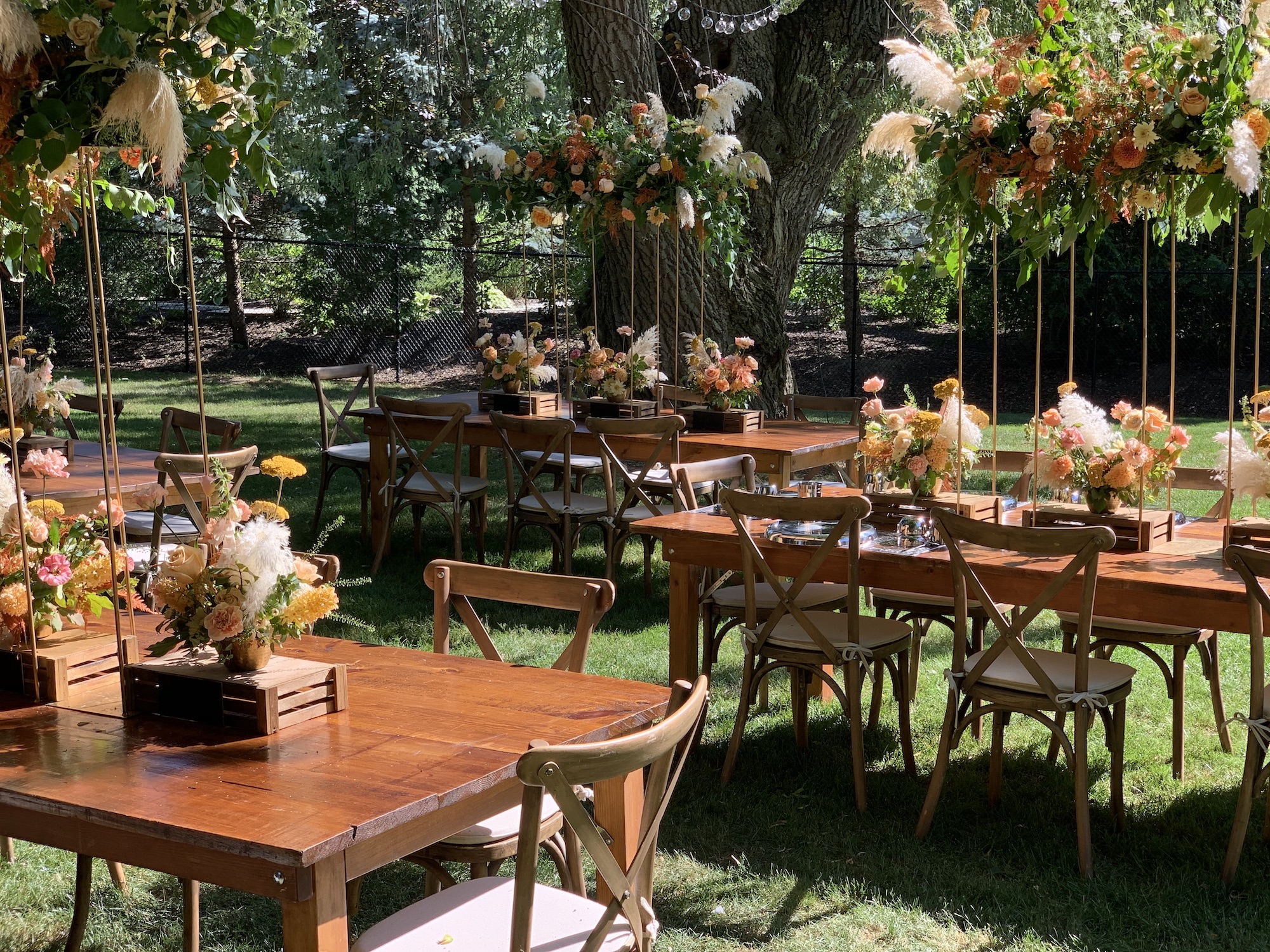