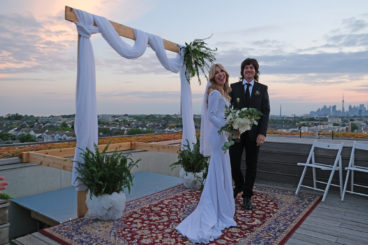 Inside a condo rooftop ceremony in the Beaches

Aurielle St. Cyr, a makeup artist for film and TV, and Caleb Cooper, owner of Paranoid Streetwear and former member of heavy-metal band Diemonds, have been together since 2018. Here’s how their plant-based, zero-waste wedding came together in August.

Caleb: Aurielle and I met in 2010 and became close friends through the music scene, working on videos and going to shows. We were both in relationships at the time, but always ended up hanging out.

Aurielle: In 2017, Caleb and I both went through pretty serious breakups. We decided it was a good time to focus on our careers, rather than fall into another relationship. 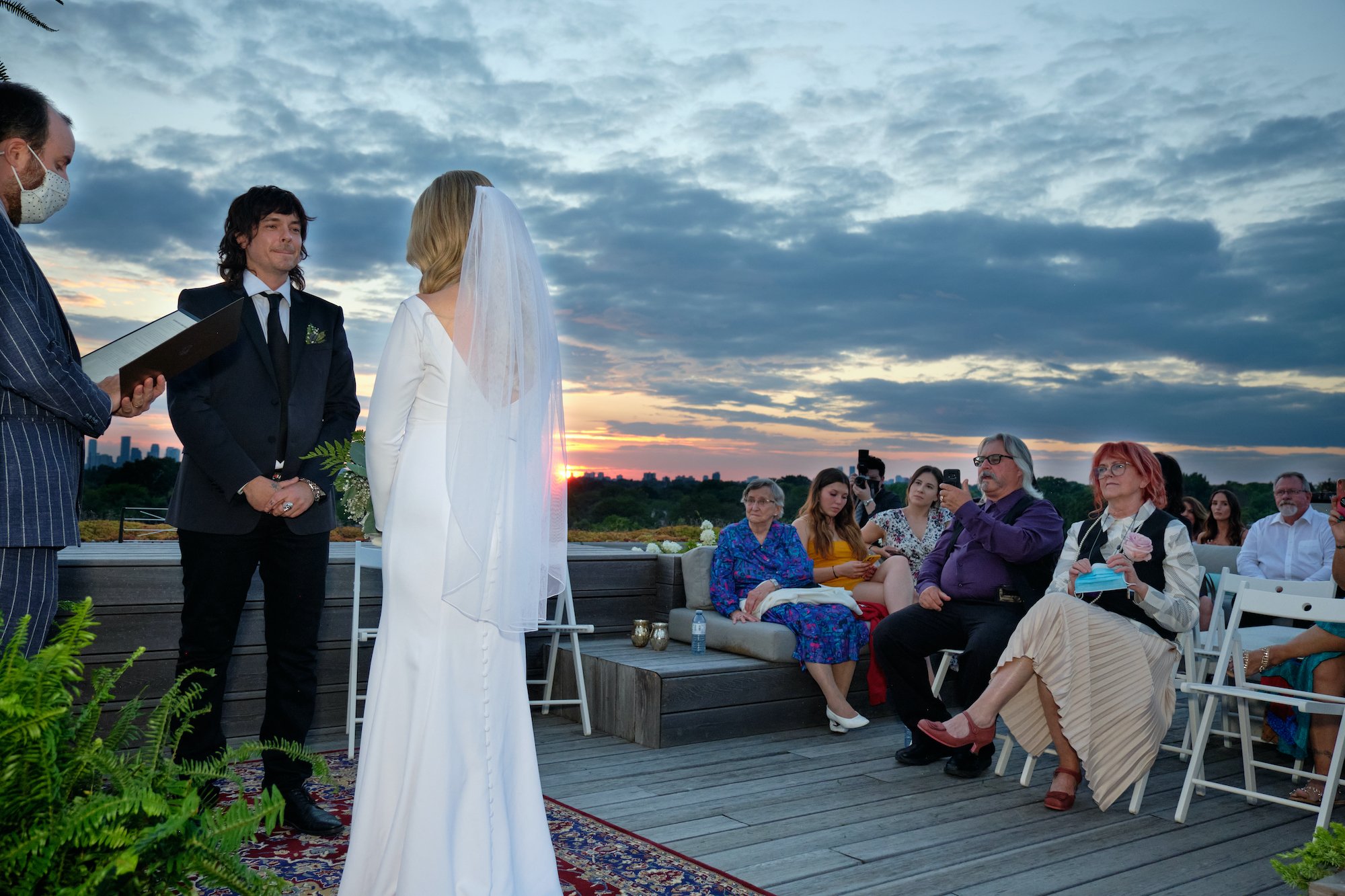 Caleb: Around that time, I switched from music to graphic design and began running a clothing line. Aurielle’s work as a makeup artist was starting to blossom, too. We began collaborating with each other. Aurielle would call me to say, “Can you help me make a blood-exploding device for a short film I’m working on?” Or I’d send her T-shirt designs, and she’d ask for one and proudly wear it. After a while, we were both ready to start dating again.

Aurielle: Our relationship became official after Caleb took me to see The Book of Mormon at the Princess of Wales for his birthday. 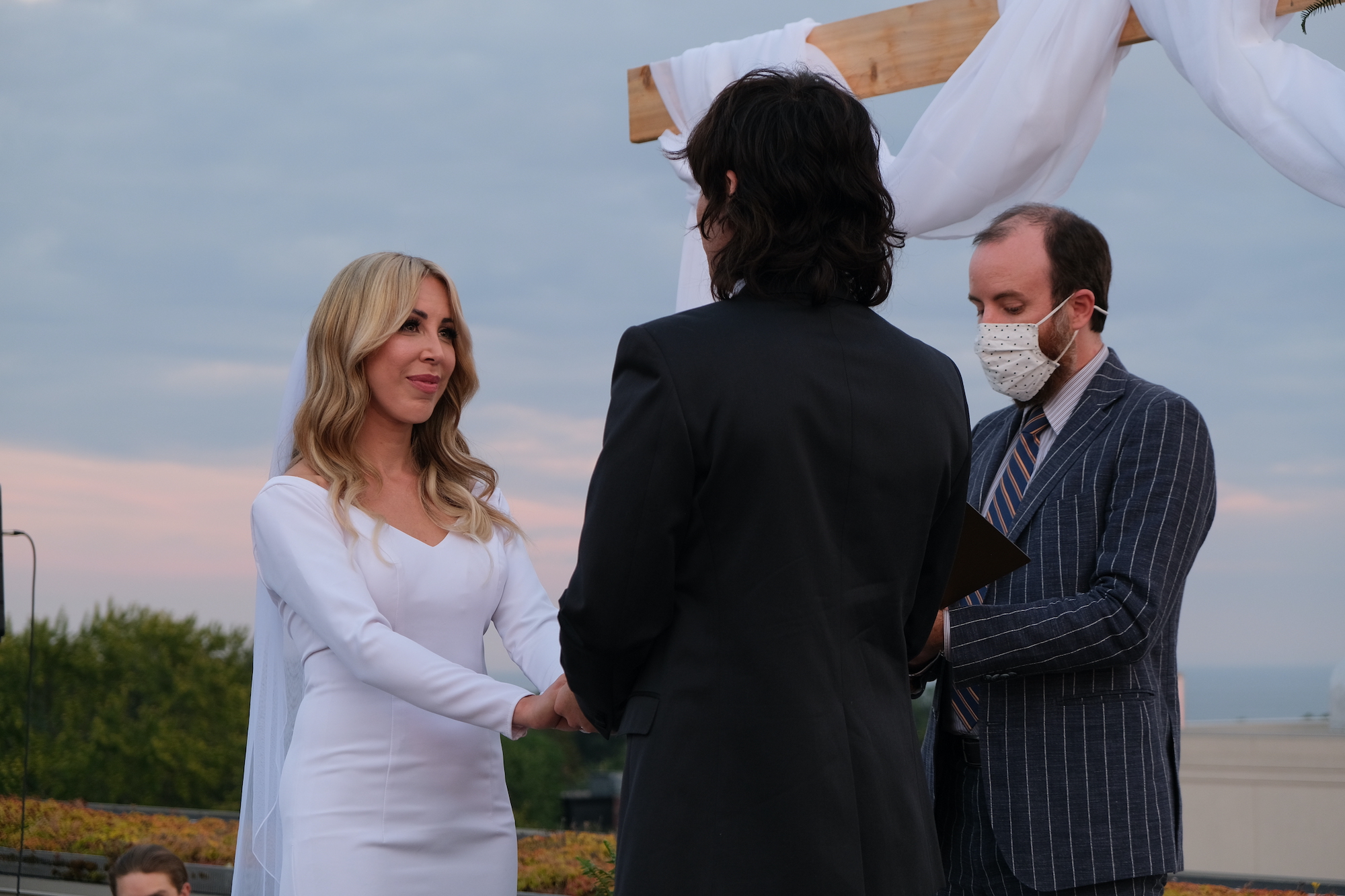 Caleb: That’s when we really started to take things seriously. We moved fast because we’d known each other for so long. We were able to skip a lot of those early-stage dating conversations. By 2018, we’d fallen in deep, deep love, and we’ve been inseparable ever since.

Aurielle: When you’re friends with somebody first, you’ve already asked all the important questions and you’ve had all these shared experiences without the usual pressure.

Caleb: In January of 2020, I went on tour with the band No Warning, filling in for one of the members. I was in Europe, and I invited her to come join me for the final show on Valentine’s Day in London. We had a beautiful time out there. That’s when I decided to propose. But then we came home to a pandemic. 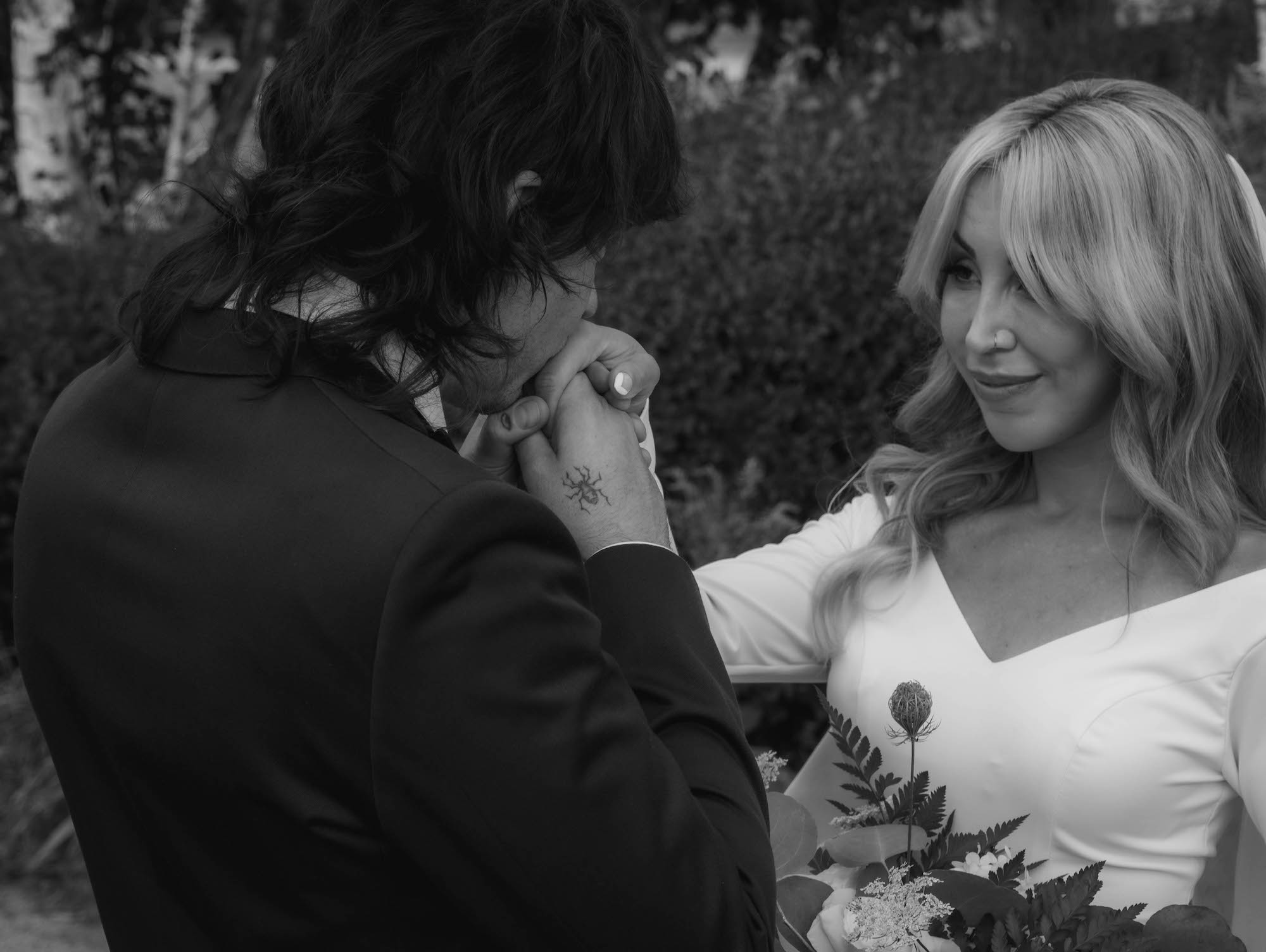 Aurielle: By September of 2020, I really wanted to go home to Vancouver to visit my family. I hadn’t been home in years, and being stuck in the house for months wasn’t good for me.

Caleb: On our trip, I sneakily added an off-shoot excursion to Harrison Hot Springs, which is a lovely resort town on a lake with natural hot springs, about an hour out of Vancouver. As soon as we arrived, I insisted that we go on a hike in the mountains. When we got up the peak, I pretended to trip on a tree root and fell to my knees. When Aurielle leaned down to check on me, I surprised her with the ring.

Aurielle: We were overlooking the ocean. The scene was stunning. When he proposed, I said, “Yeah, duh!” We decided to throw the wedding in August of 2o21, and I went head-first into planning mode. We wanted it to be a no-waste wedding, so we didn’t do paper invites or party favours. Just because we want to get married doesn’t mean the planet has to suffer. I had worked at the Shameful Tiki Room for a while, so we decided we’d get cocktails from there.

Caleb: We planned to keep the ceremony as casual as possible so people felt like they were at a party. We told our guests, “Come hang out, celebrate this with us and let’s have fun.”

Aurielle: Caleb and I eat a plant-based diet, so that’s what we wanted for the food. The wedding planner recommended John Collins, a chef who has his own vegan dairy company. We decided to try it out, and we were blown away.

Caleb: At the end of the tasting, he said he had a little surprise for us. He pulled out a vegan brie wheel that he had been cultivating. It was the best thing we’d ever had. We decided it would become the first course of our wedding, with figs and crisps.

Aurielle:  We got married on the rooftop Caleb’s uncle and aunt’s condo in the Beaches. We always loved going there to watch the sunset or fireworks. It’s strange—you can’t hear the buzz of the city when you’re up there. My dress was based on a vintage pattern that I found online. My mom, who is a seamstress by trade, later fixed it up.

On the day of, I got ready with my girlfriends in Caleb’s aunt’s art studio, and Caleb got ready in one of the guest rooms. I had nitpicked every detail for six months, and I realized I needed help so I wouldn’t be running around on my wedding day. Still, about 10 minutes before start time, I was up on a ladder fixing something. A guest who showed up early saw me in daisy dukes and said, “This is casual!” We started our wedding with a cocktail hour, followed by the ceremony. Then, everyone went to the lower patio where we had dinner. After the speeches, we came back up to the rooftop for the rest of the night. 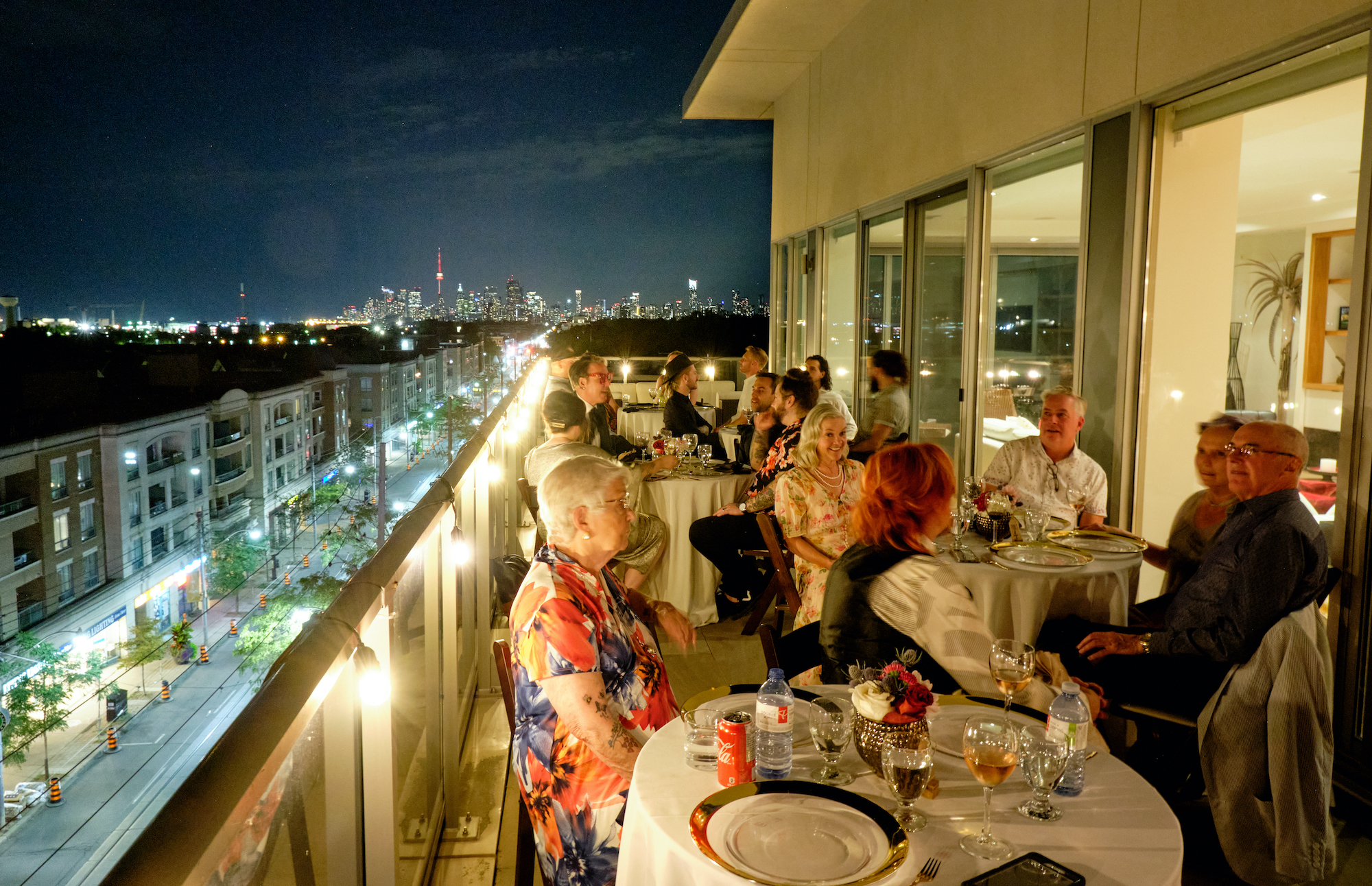 Caleb: It felt so organic and natural. The flow was seamless. We couldn’t have a full band so we had an old friend of mine play beautiful classic guitar throughout the cocktail hour. Aurielle walked down the aisle to Bach’s “Little Prelude in D Major.”

Aurielle: It was perfect. After the reception, we checked into the Broadview Hotel. They surprised us with a bottle of champagne but we were too tired to drink it. We had mimosas in the morning and headed to the Scandinave Spa in Collingwood for the day. Once the world goes back to normal, we plan to honeymoon in Thailand and Australia. We’re just so happy to be married.

Here’s a few more photos from the day 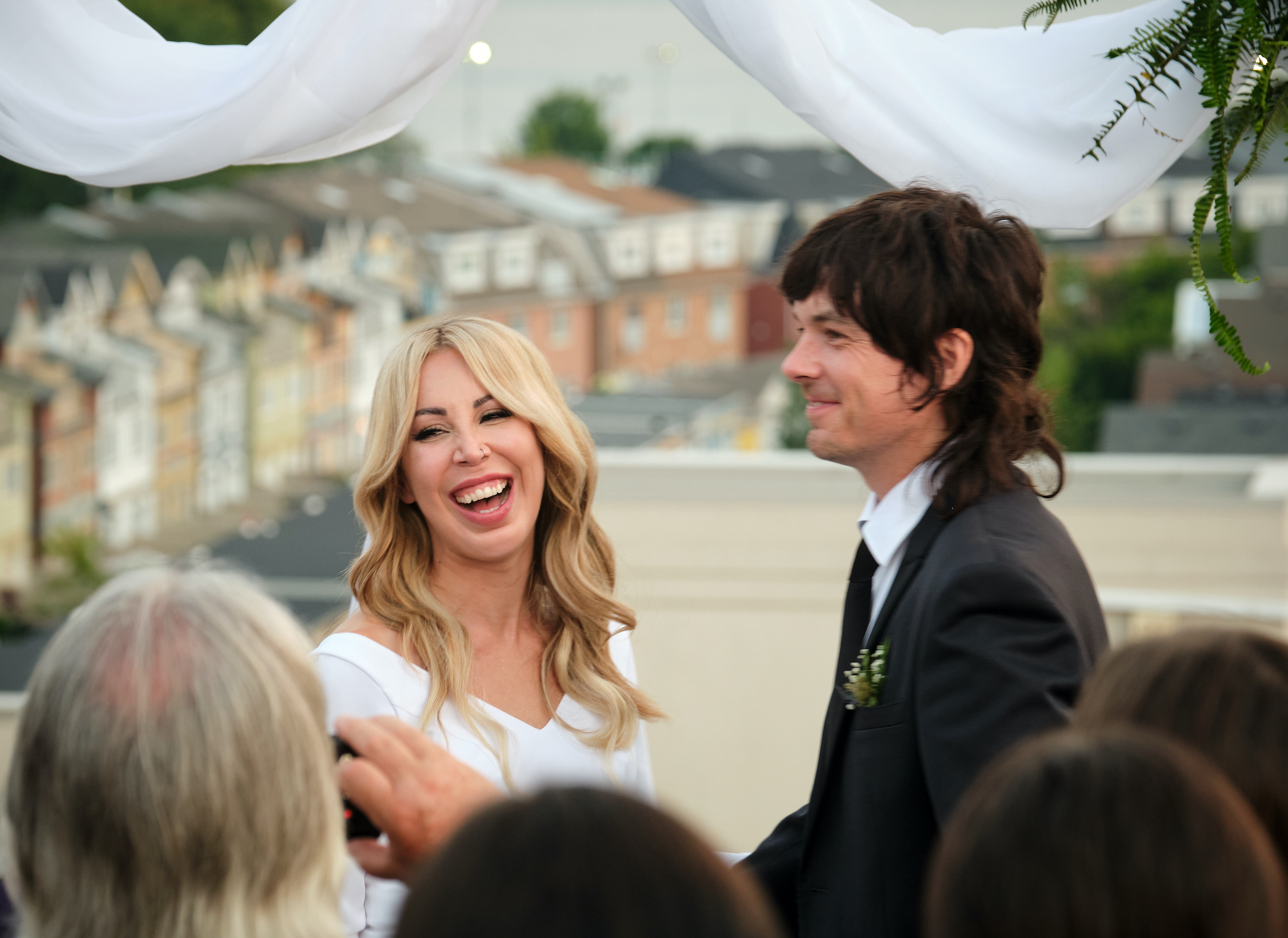 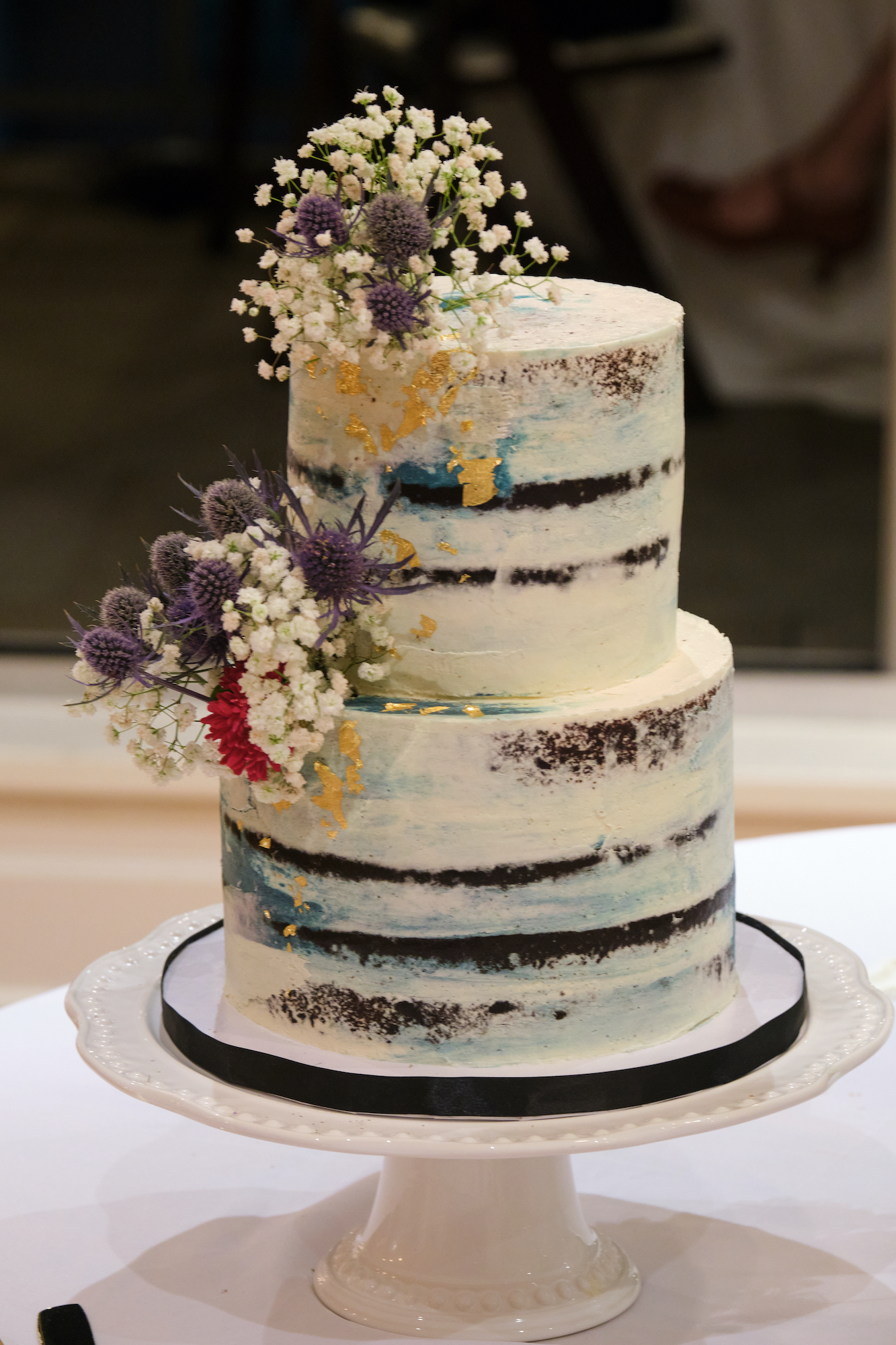 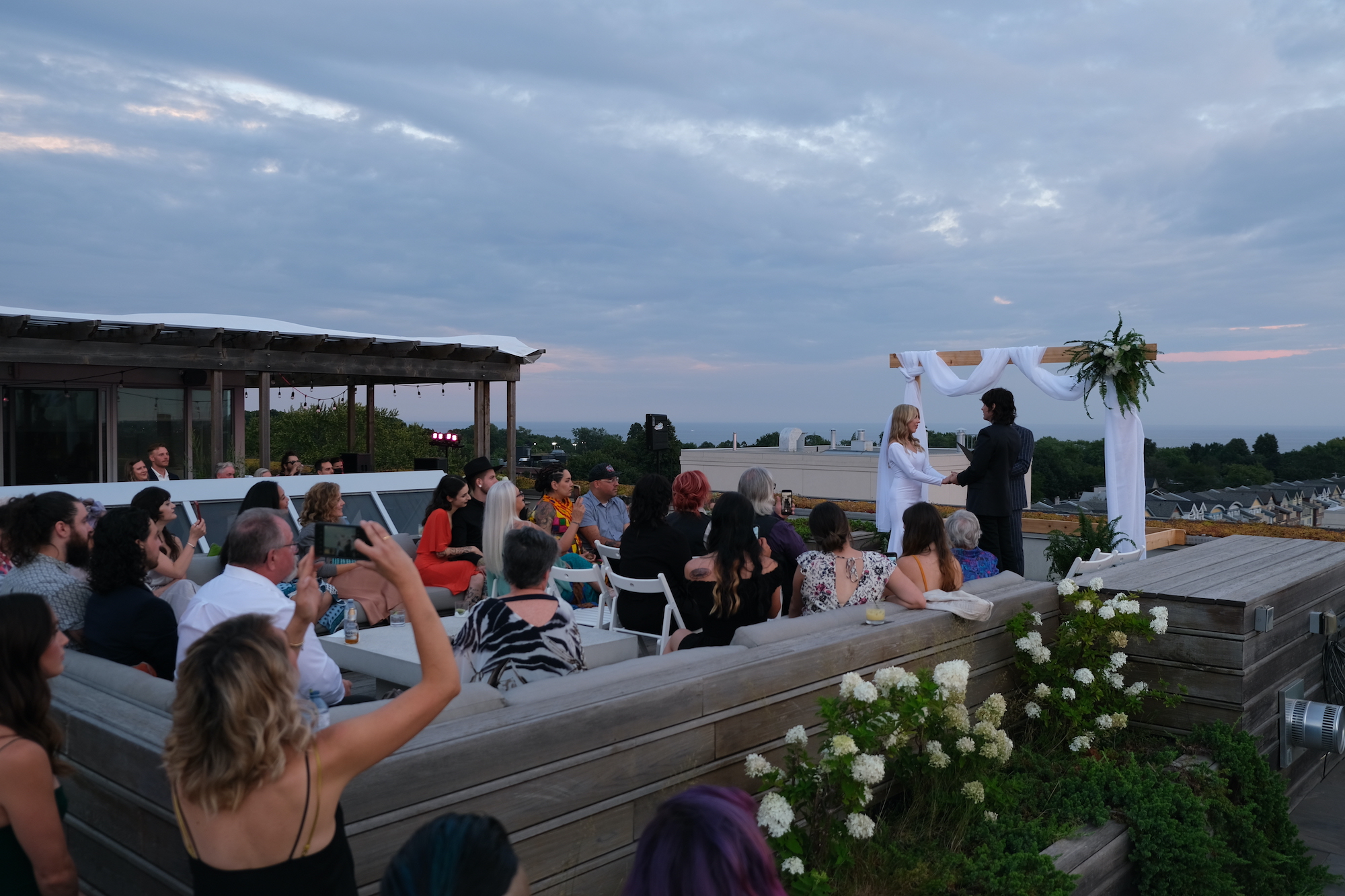 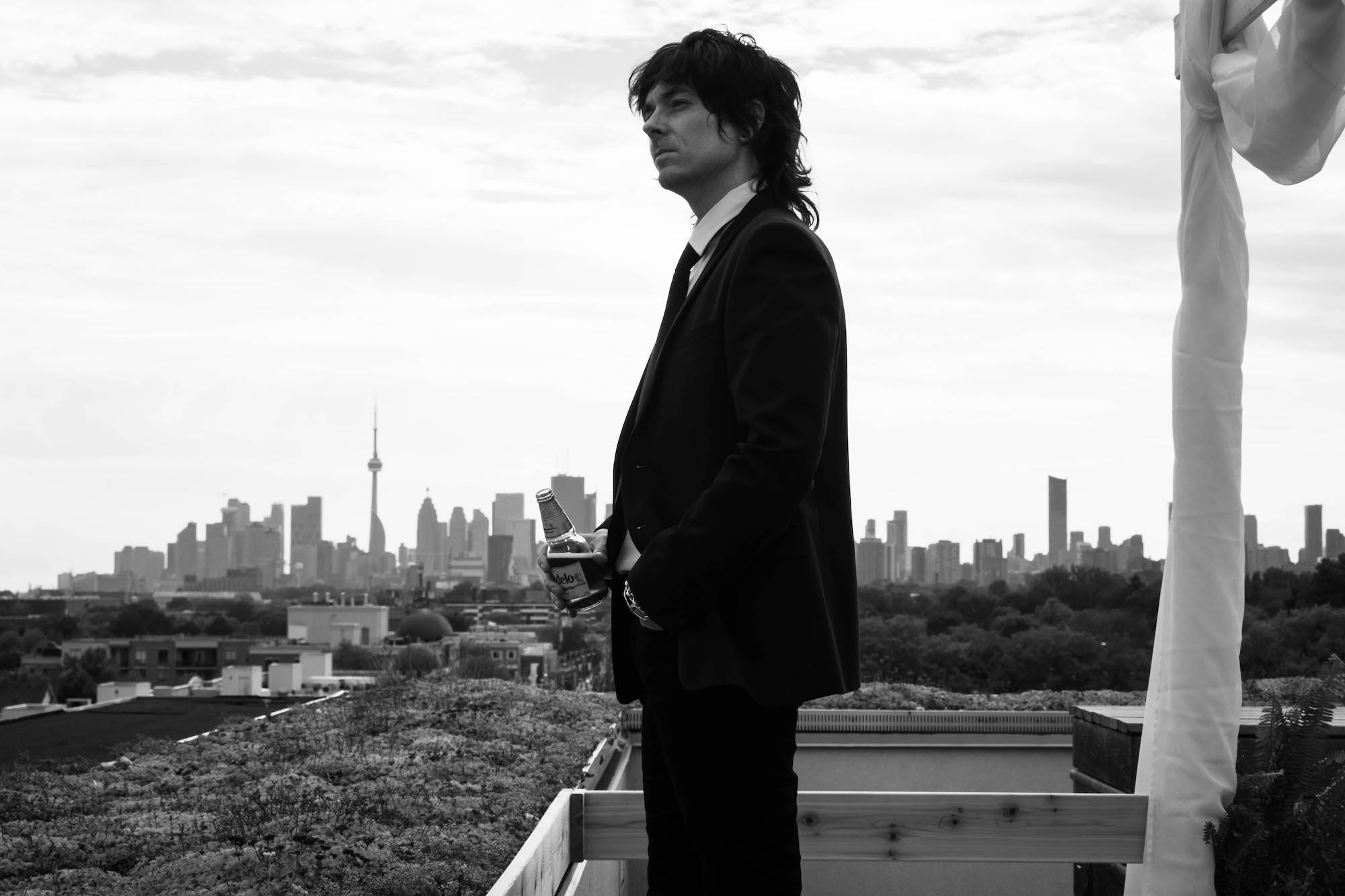 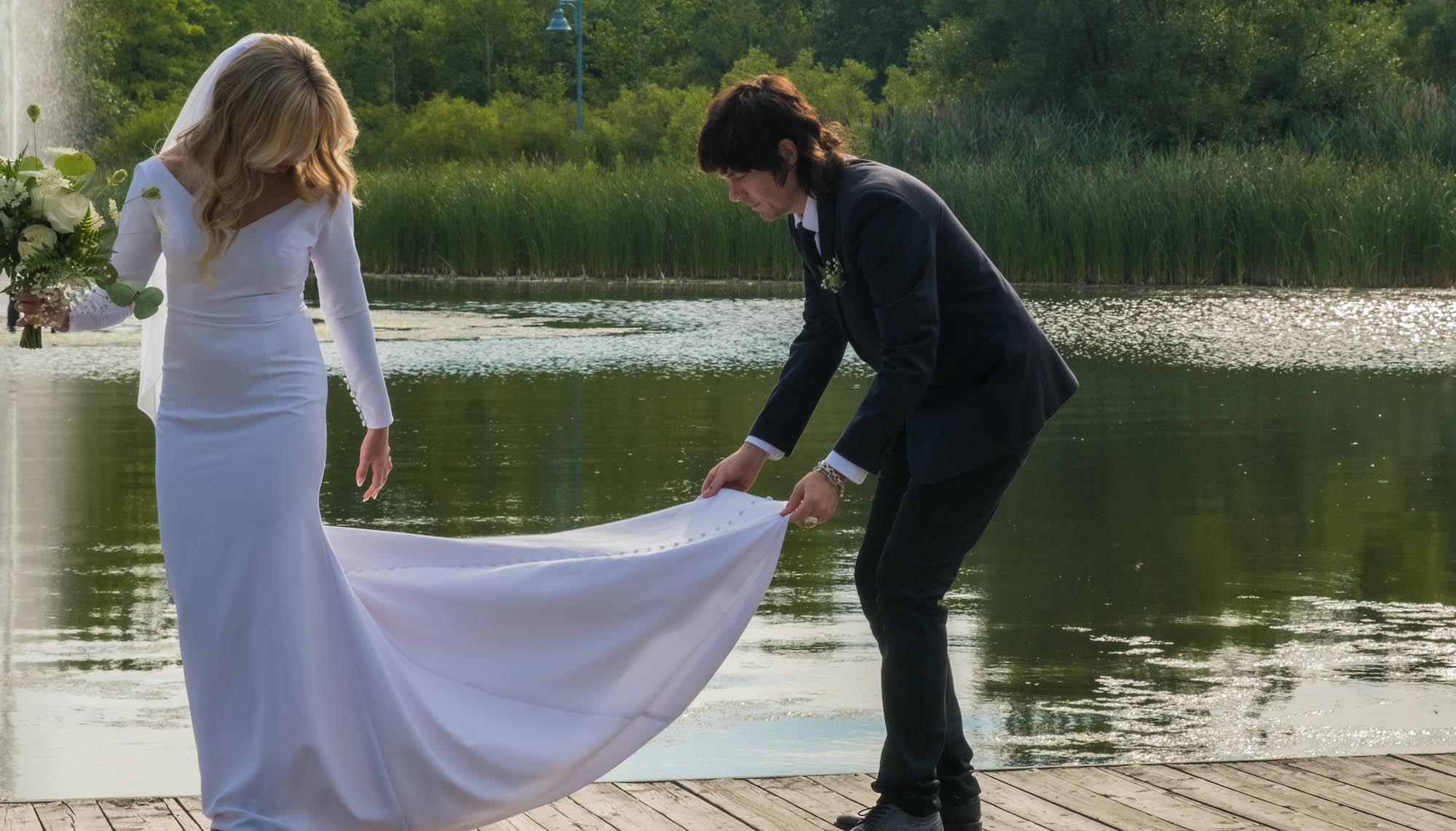 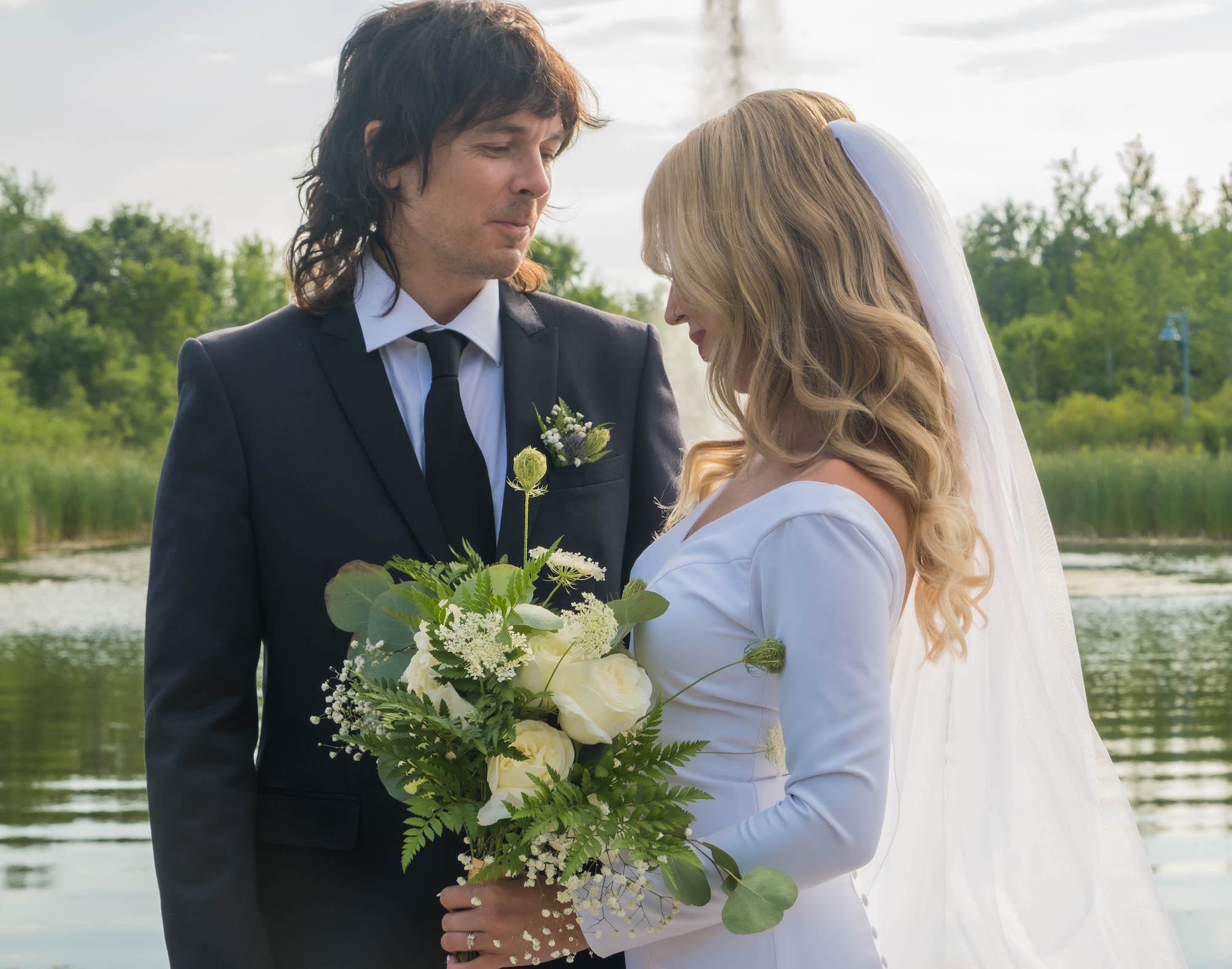 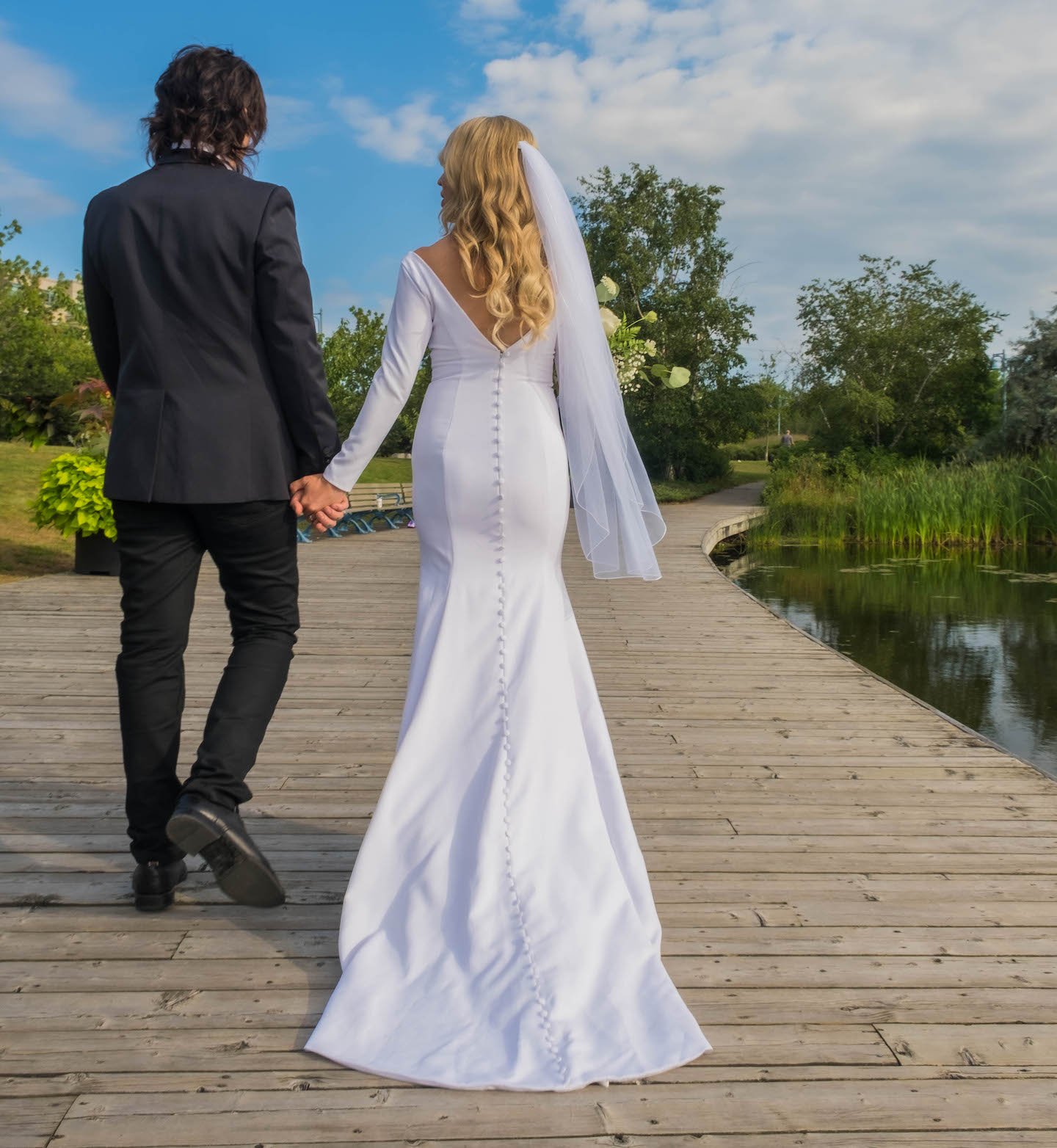 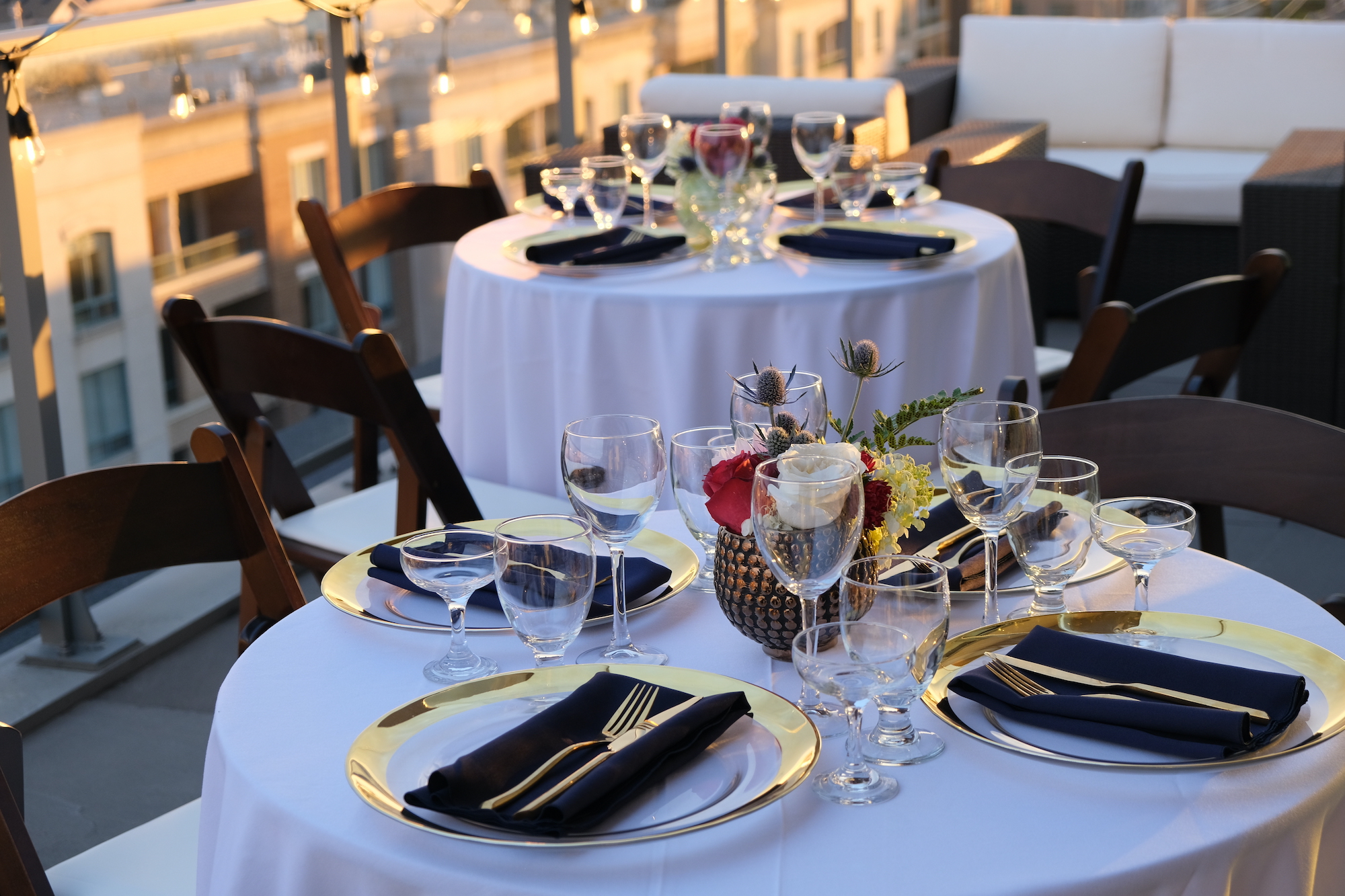 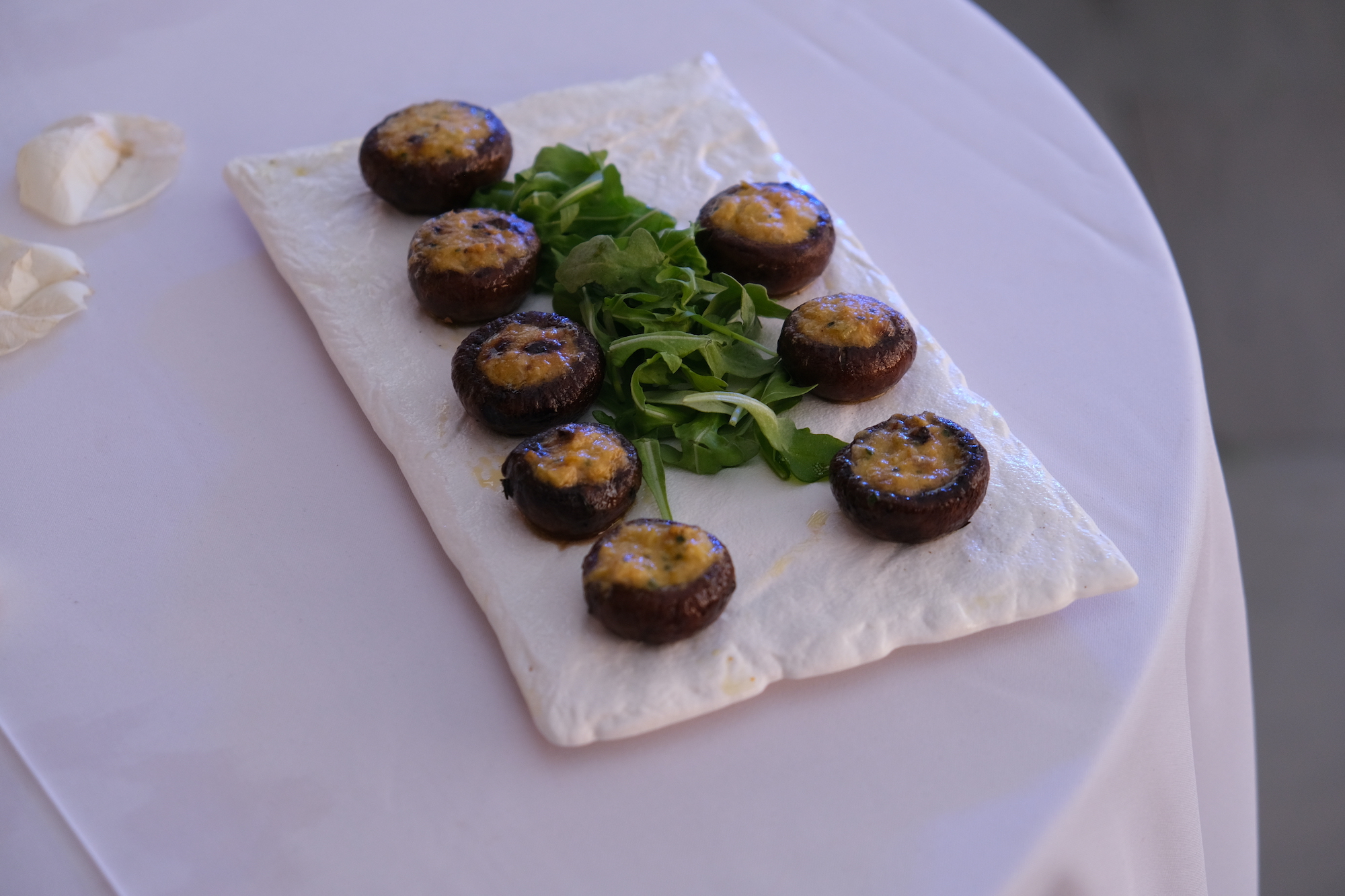 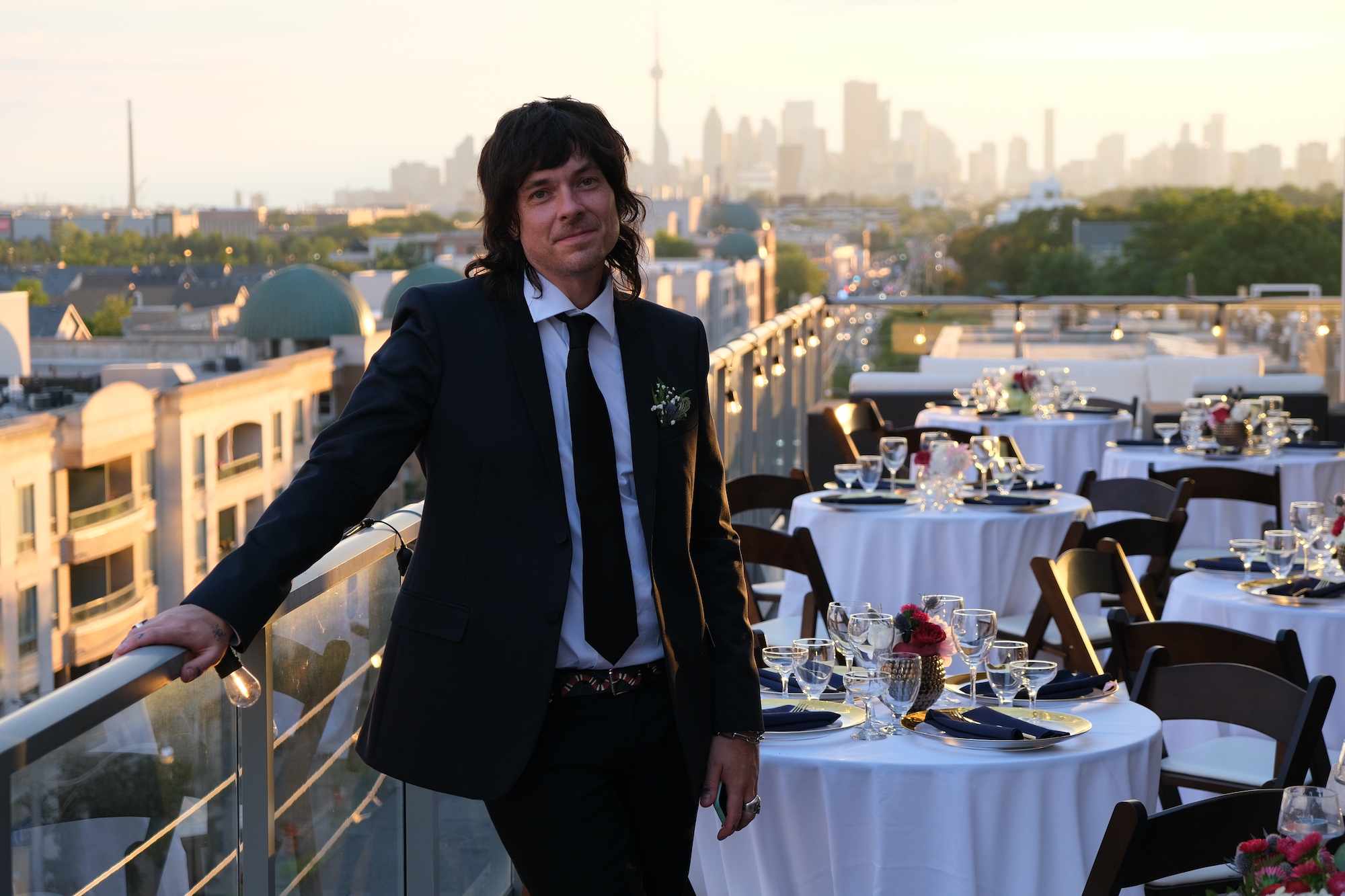