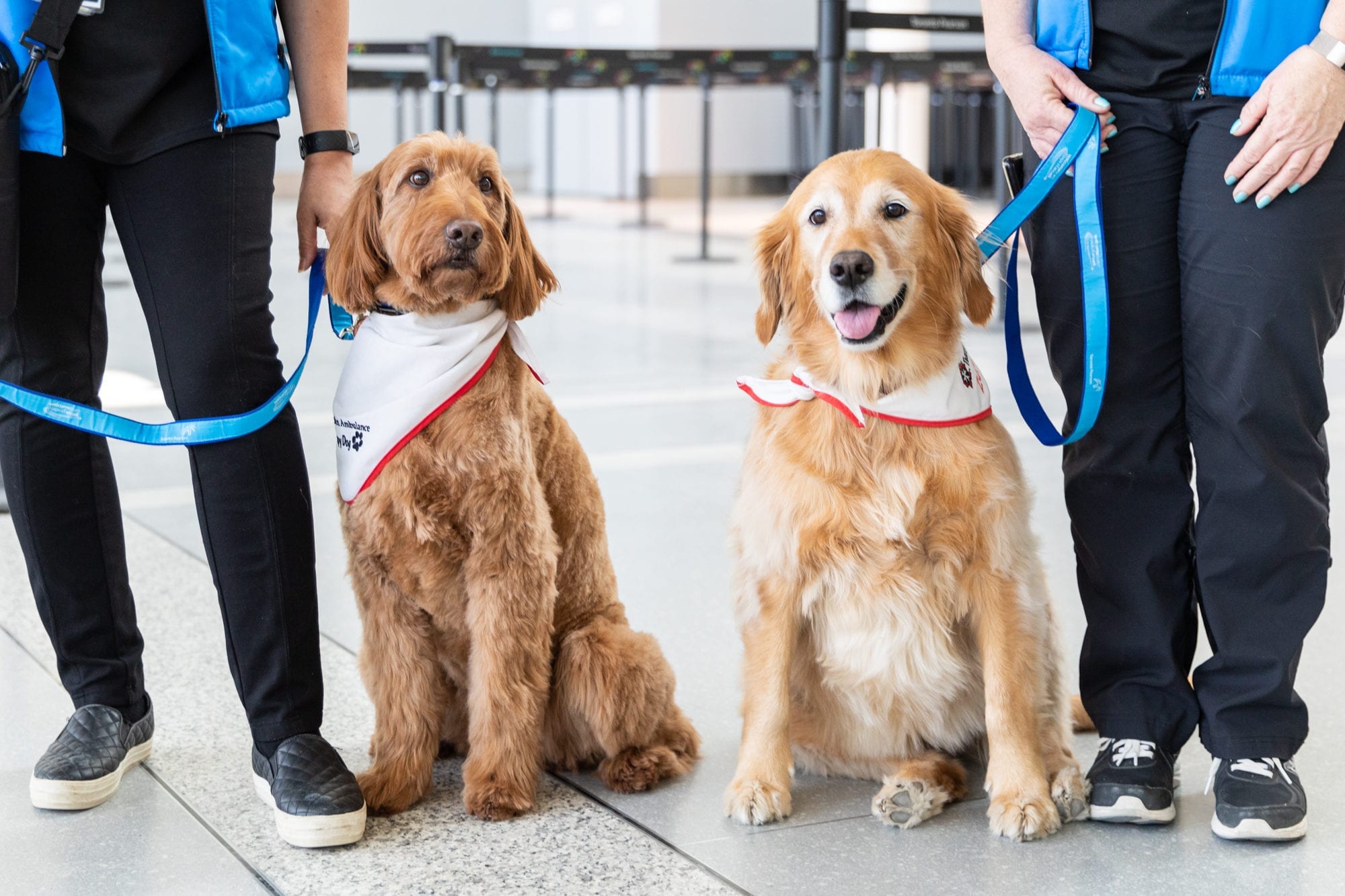 There’s a new crew of canines hanging out at Pearson, but these dogs aren’t drug sniffers. Instead, they’re part of a new therapy dog program, in partnership with St John Ambulance, designed to help travellers de-stress. For now, visitors can spot the dogs roaming around the pre-security area looking for some ear scratches (once they get their clearance, they’ll be headed to the gates). Here a who’s who of the new dog squad: 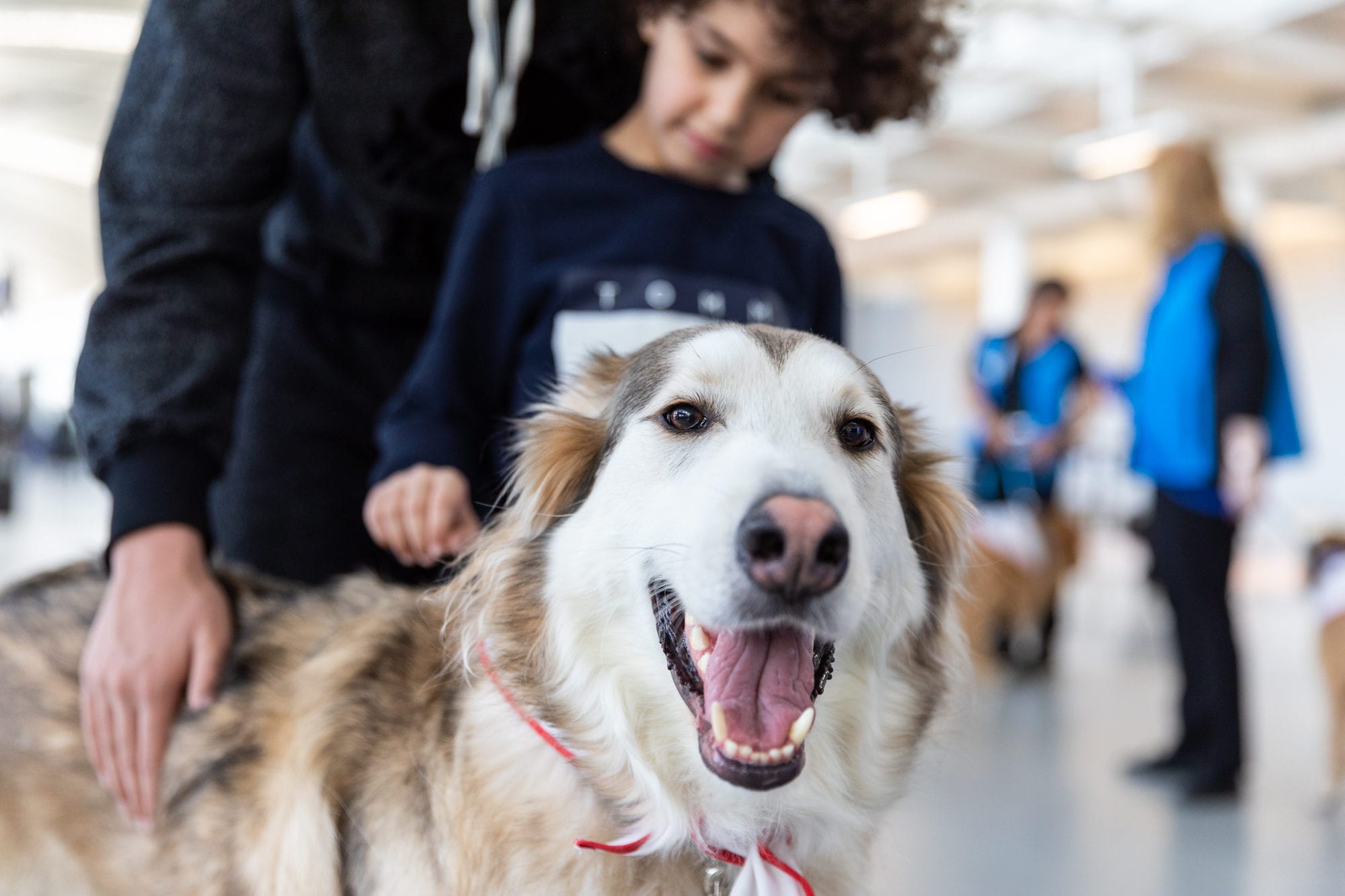 A four-year-old husky–German Shepherd mix
Ghost, named after Jon Snow’s direwolf in Game of Thrones, was rescued as a puppy from a reserve in Northern Ontario. His handler, Claudia Hernandez, only planned on fostering him for a few weeks, but s ended up falling in love with the pup and adopted him. He’s new to the St. John Ambulance program and, according to Hernandez, loves making people smile. He’s also a fan of Toronto’s frigid temperatures. “His favourite weather is minus 40,” she says. A peek at his Instagram shows he can rock a backpack, gives excellent hugs and likes to cuddle kittens. 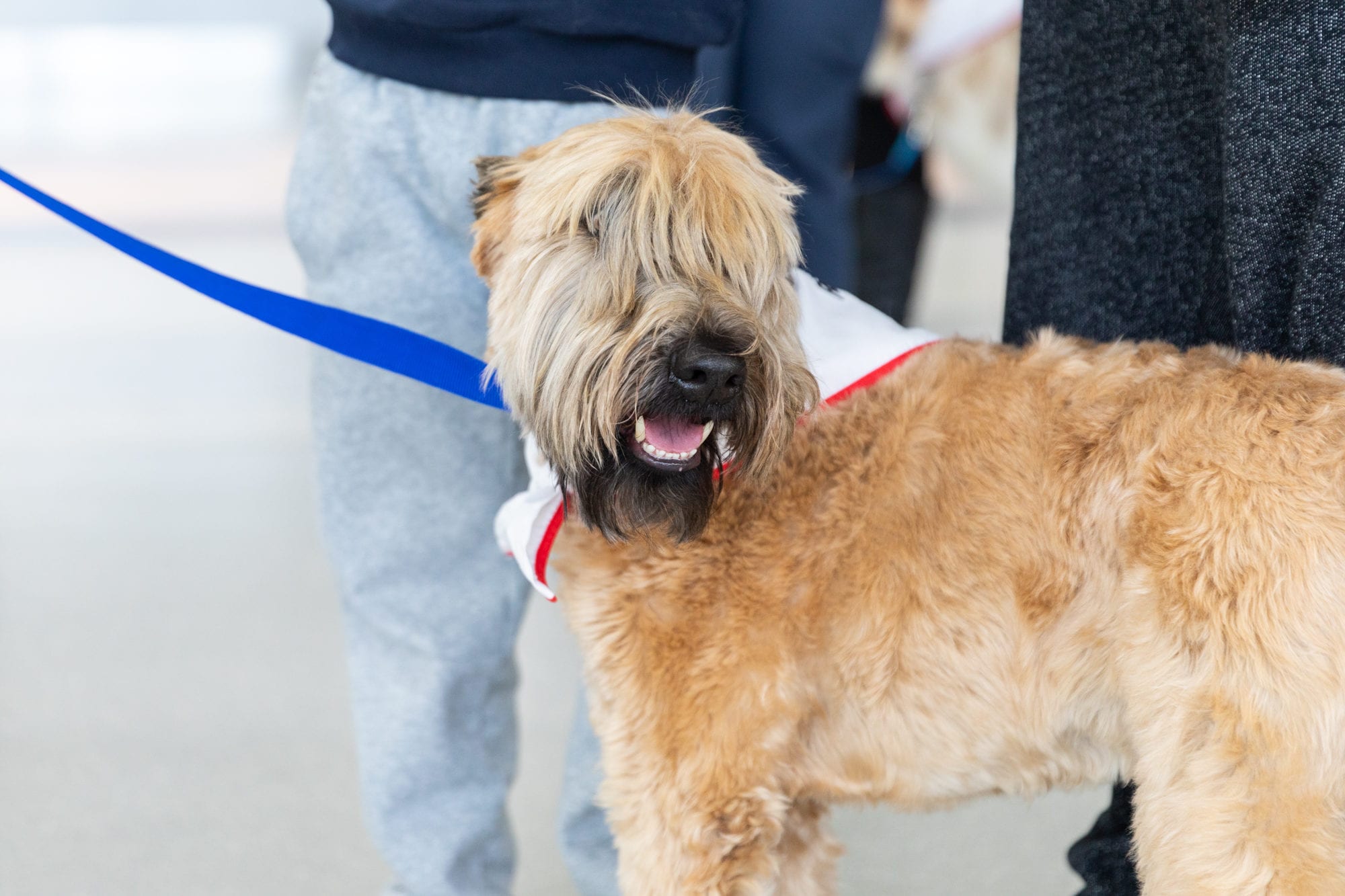 A five-year-old soft-coated Wheaten terrier
Ringo Starr has been working as a therapy dog since he was just a year old, and these days, he’s a pretty busy pooch: in addition to his Pearson gig, he also works in a seniors’ residence and in the courts, where he comforts victims of child trafficking during their testimonies. He likes to sit right on top of people and loves receiving biscuits as compensation for his hard work. 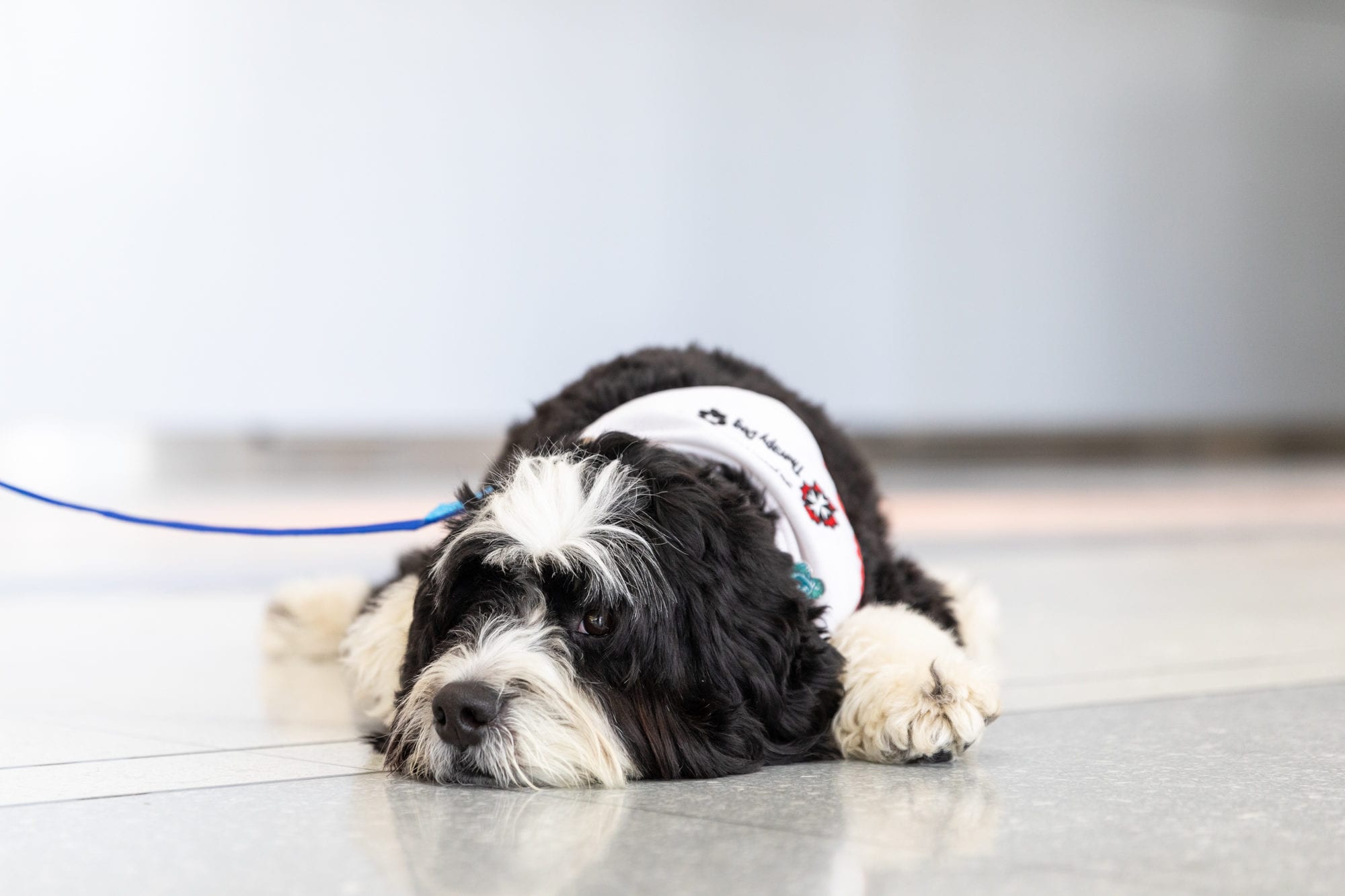 A three-year-old Australian Bernadoodle
Shep is a chill goof of a dog who’s been working in therapy for just over a year. He hangs out with patients at a long-term-care facility, but finds the bustle at Pearson much more exciting. His handler, Alex Eakins, says he has a great memory—especially when it comes to french fries. “At the airport, he’ll pull me to all the chairs where he once found a fry,” says Eakins. 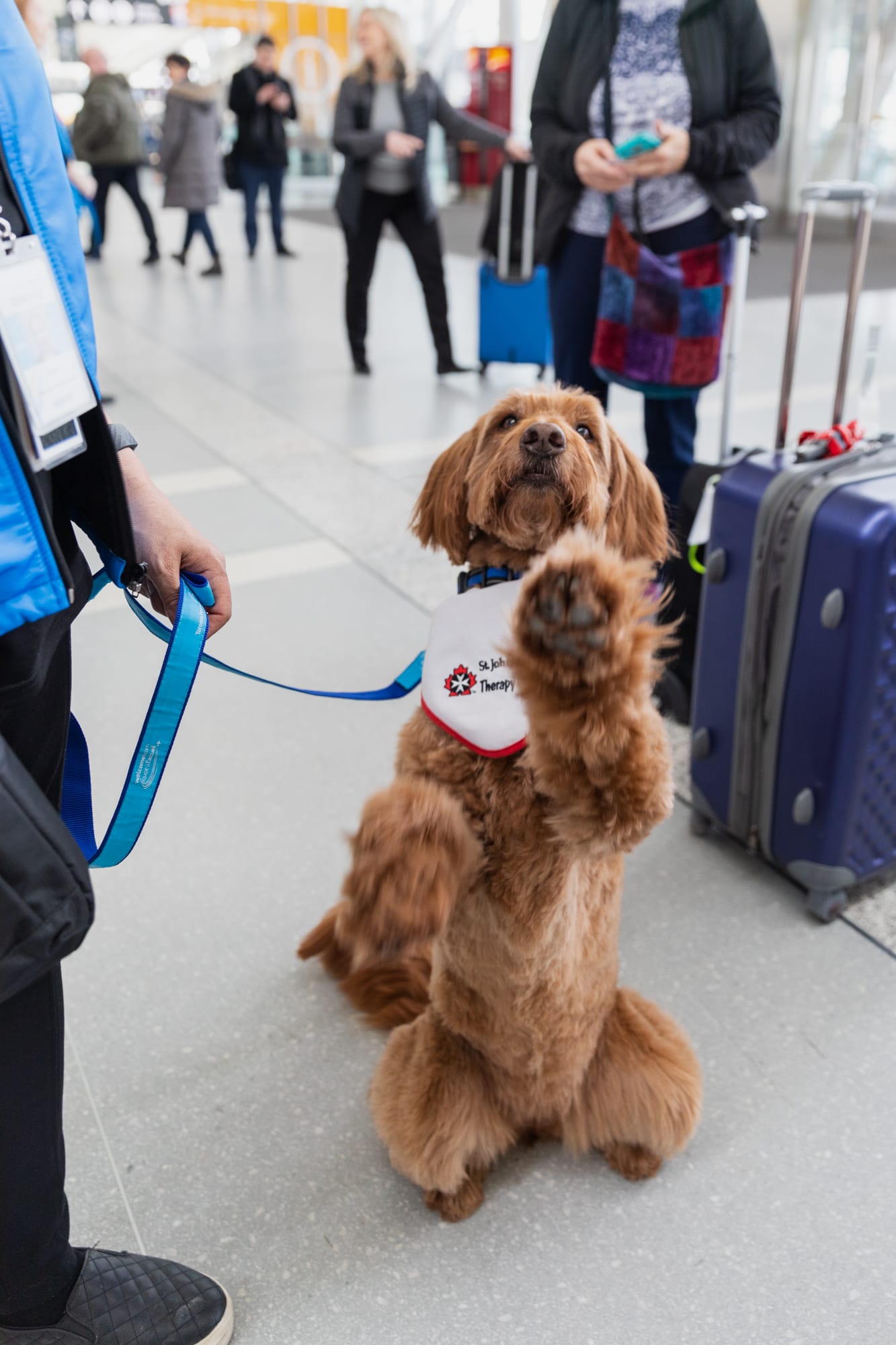 A 10-year-old goldendoodle
Luna has been a therapy dog for most of her life. She volunteers at a nursing home during the week, where she regularly climbs into bed to cuddle with a 104-year-old woman. “She’s very delicate and adjusts to the woman’s needs,” says her handler, Melissa Adamson. 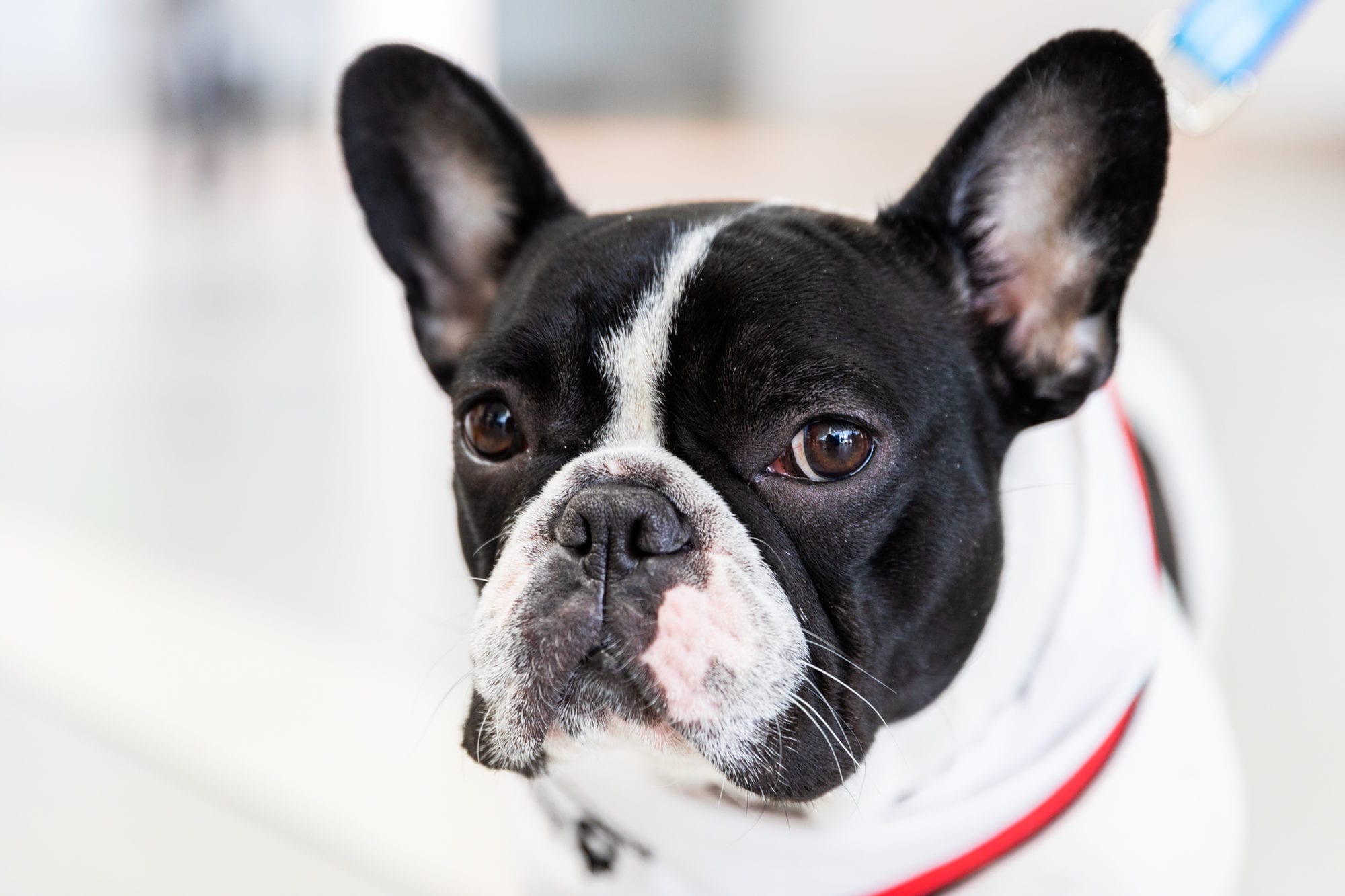 A two-year-old French bulldog
Daisey is the youngest pup in the Pearson group, with just a year of experience. Her handler, Ali Meilach, is the intake coordinator at St John Ambulance therapy dog program, and this is the first time she’s been able to work directly in the field. 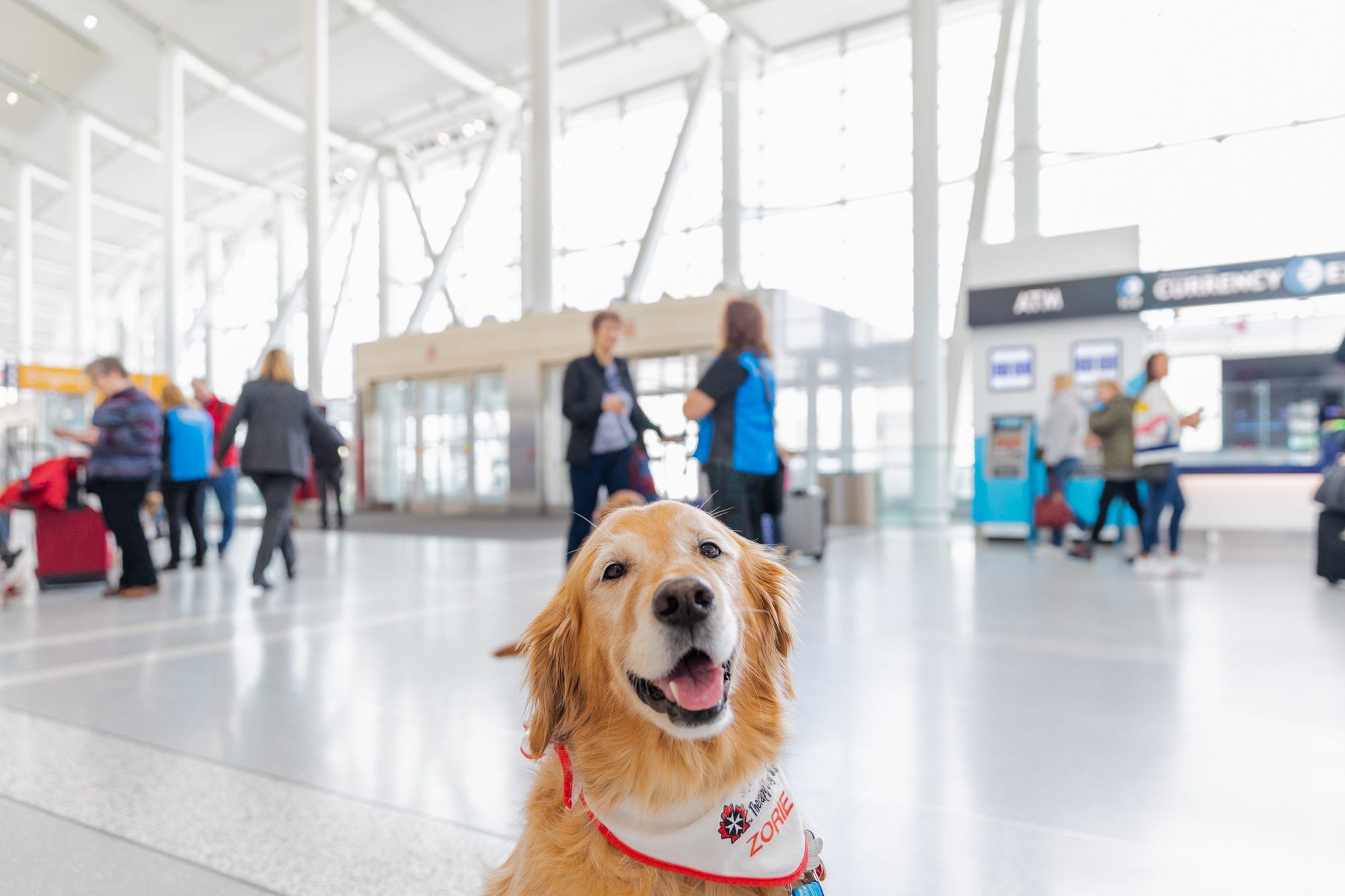 A seven-year-old golden retriever
Zorie’s been a therapy dog for five years—she regularly visits a nursing home and helps people recovering from strokes. Her handler, Cathy Loik, says Zorie never seems to tire out and loves to be the leader of the pack. “She thinks she’s in charge of the group,” says Loik. She spends summers at the cottage, where she paddle boards with Loik and hunts for fish in the lake. 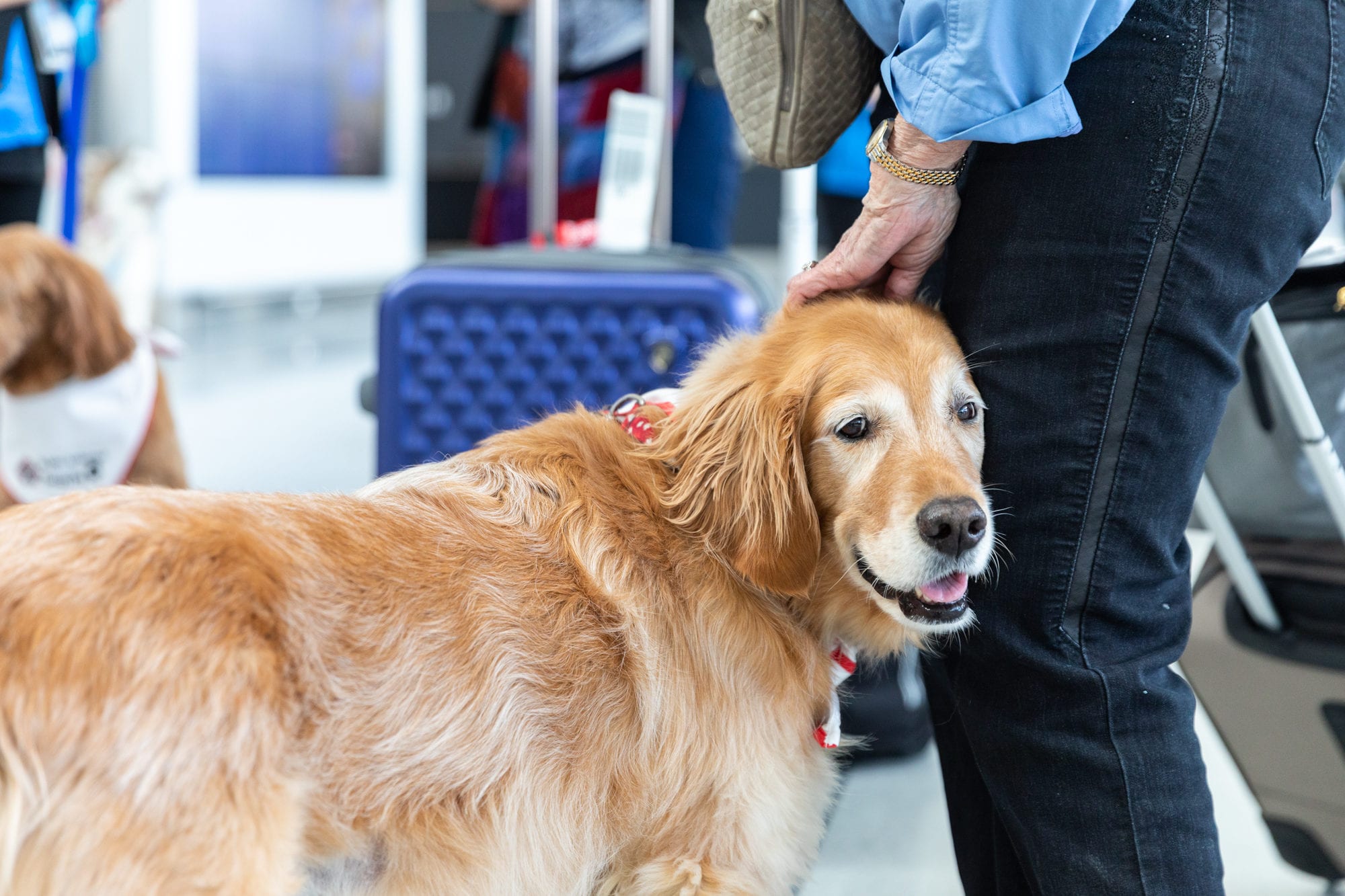 A five-year-old golden retriever
After three years of obedience training, Hunter’s handler, Melissa Wong, decided to give obstacle courses a try. But things didn’t go so well. “I told him to run through this tunnel and he looked at me like, ‘You run through the tunnel,’” says Wong. She decided therapy might be more his speed. 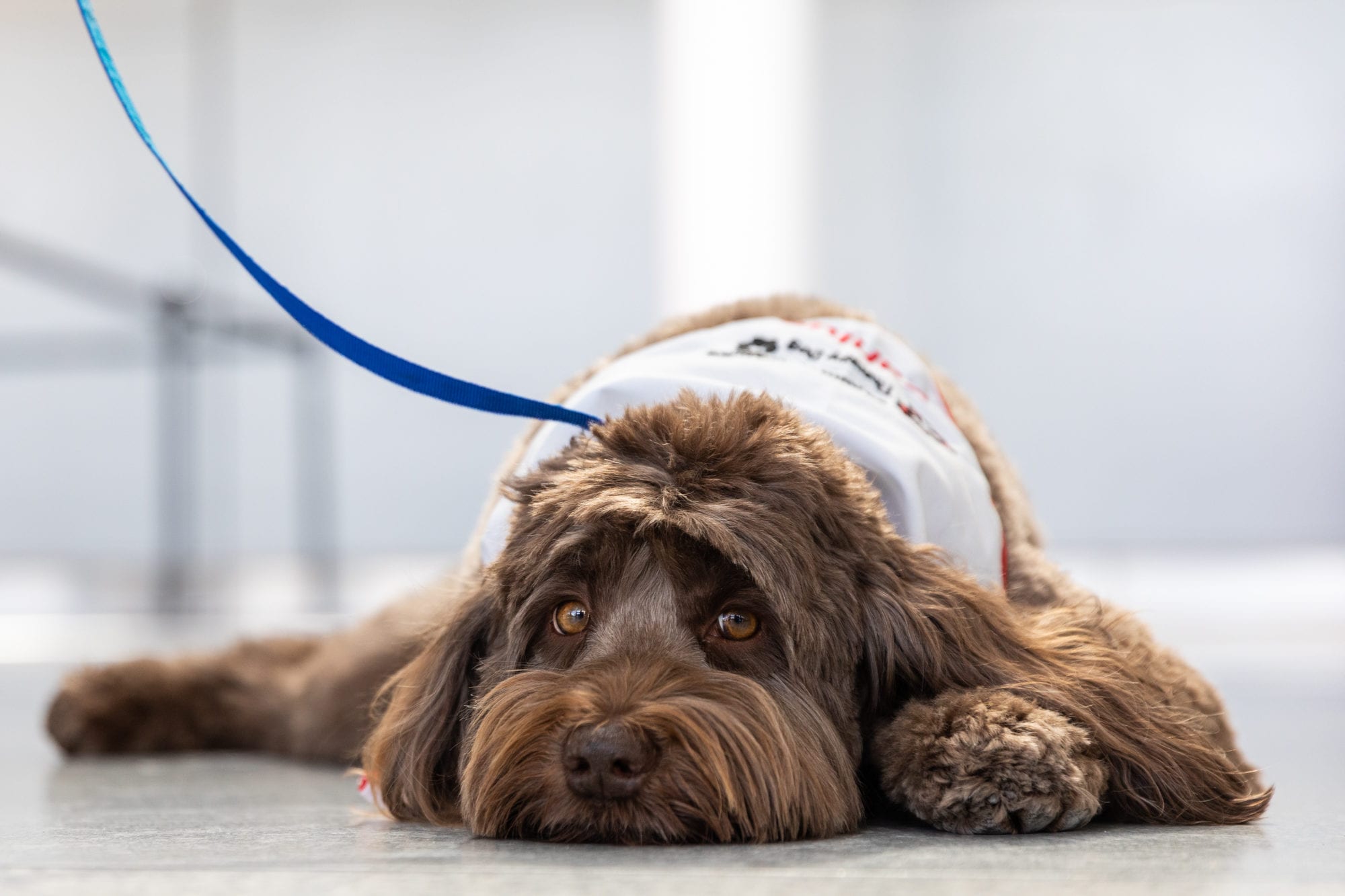 A seven-year-old chocolate Labradoodle
Before Kahlua became a therapy dog, he spent a lot of time with Joanne Vanderberg’s father-in-law, who was suffering from Alzheimer’s while living in a long-term-care facility. “Kahlua was the only thing that would make him relax,” says Vanderberg. “We thought he might be able to help other people, too.” He’s super-calm, but goes absolutely crazy for balls.

Here are a few more shots of the dogs on the job. Ringo Starr loves to lean into people: 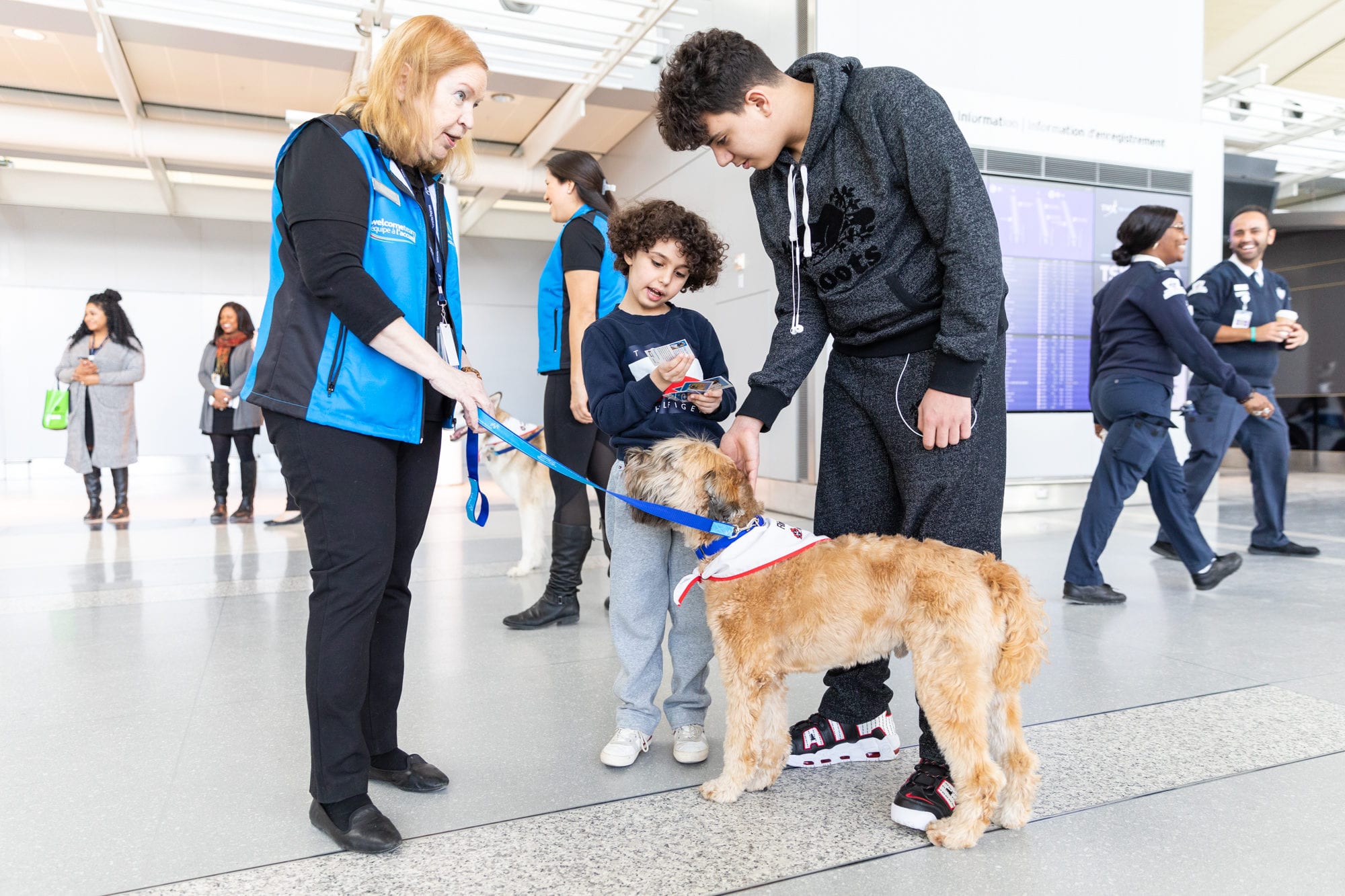 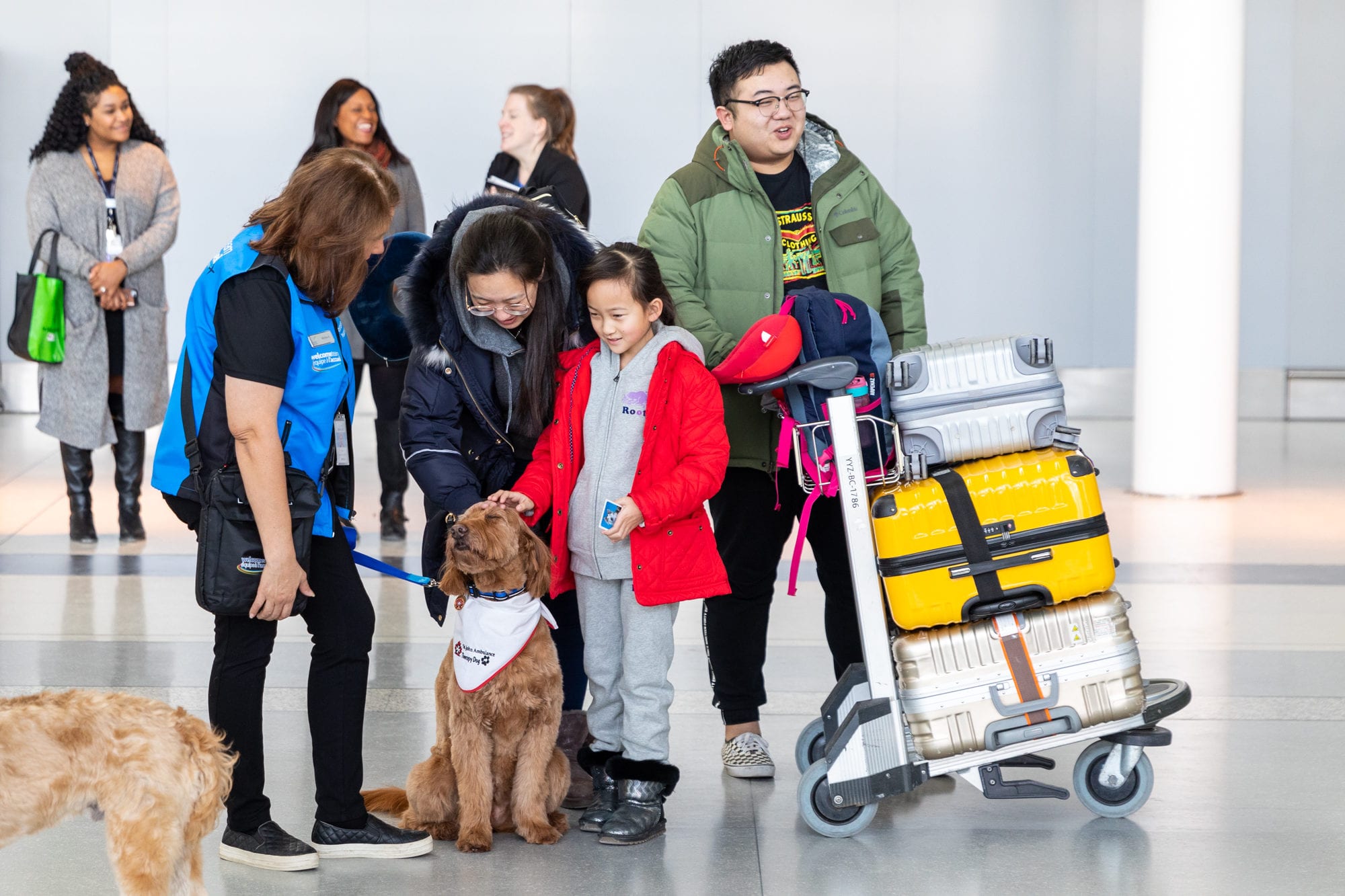 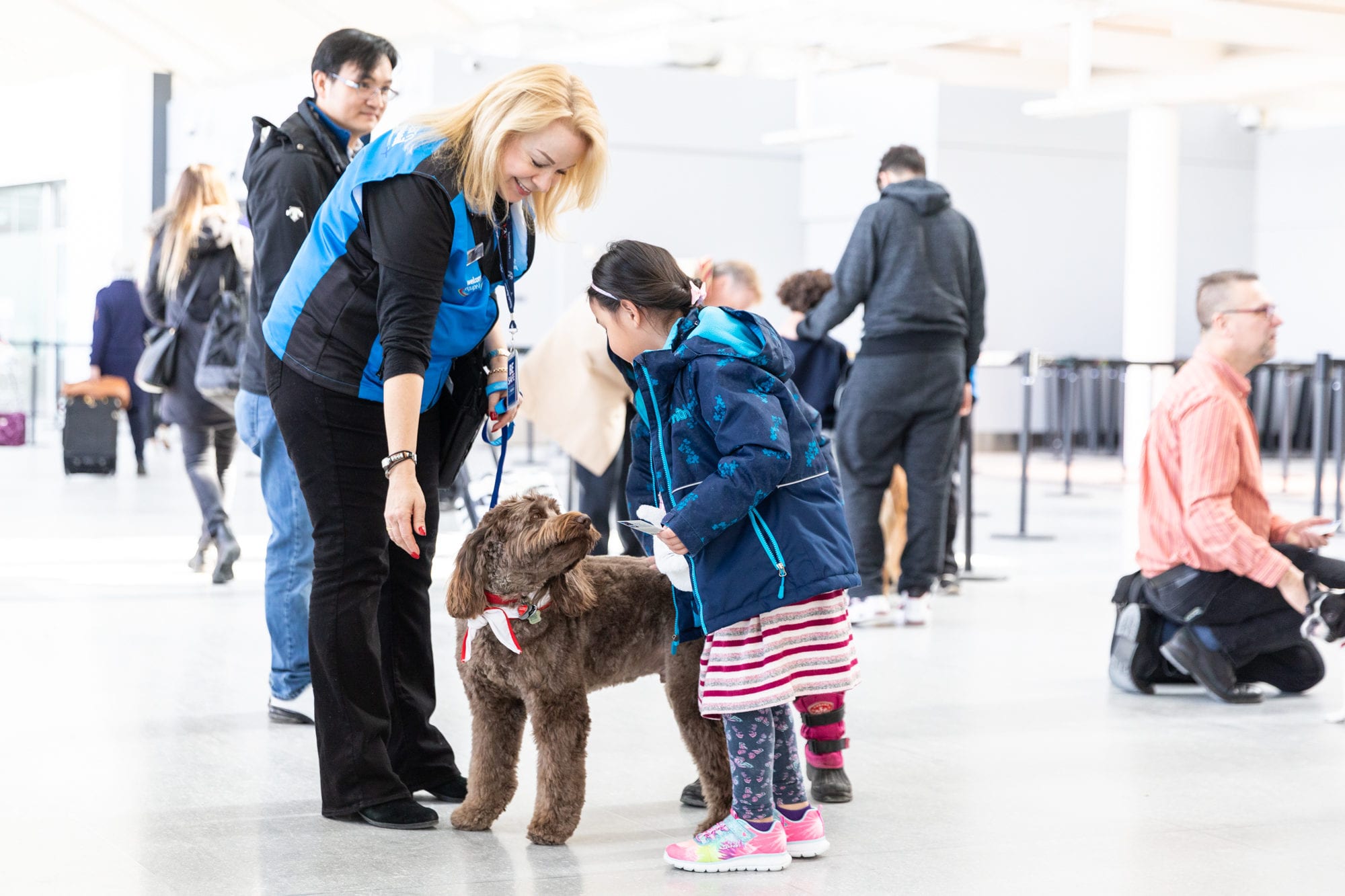 Ghost likes the smell of this luggage: 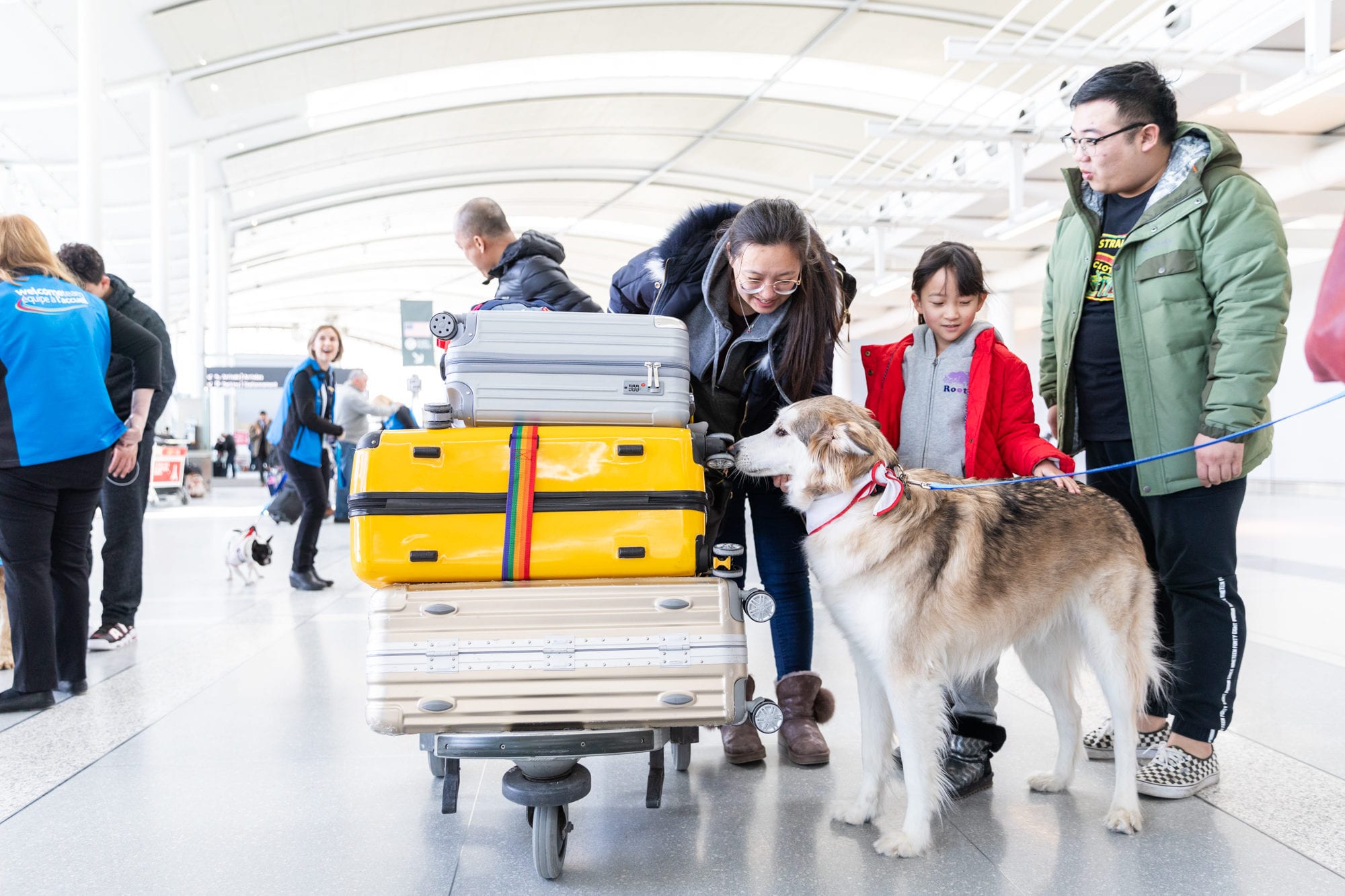 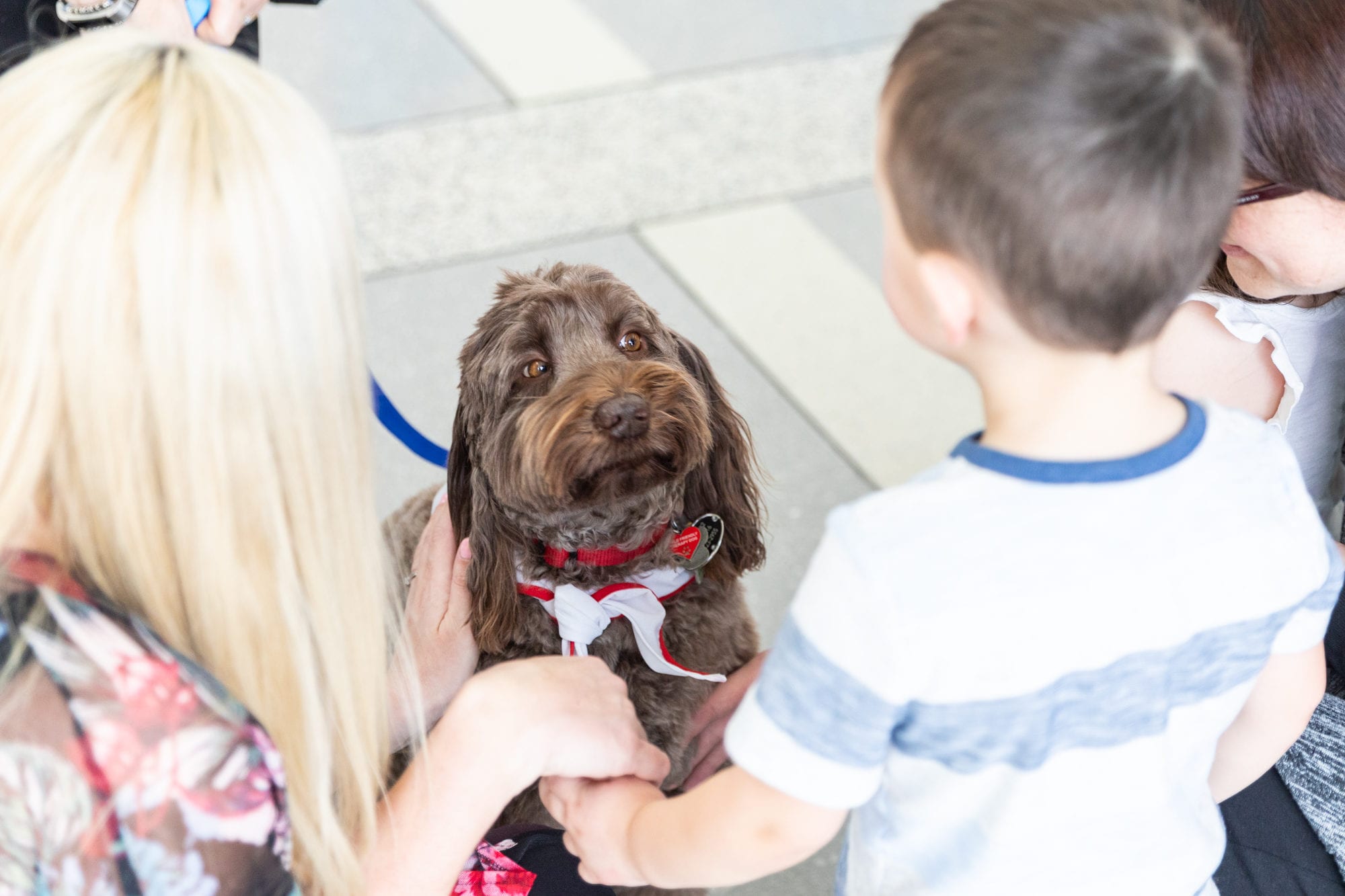 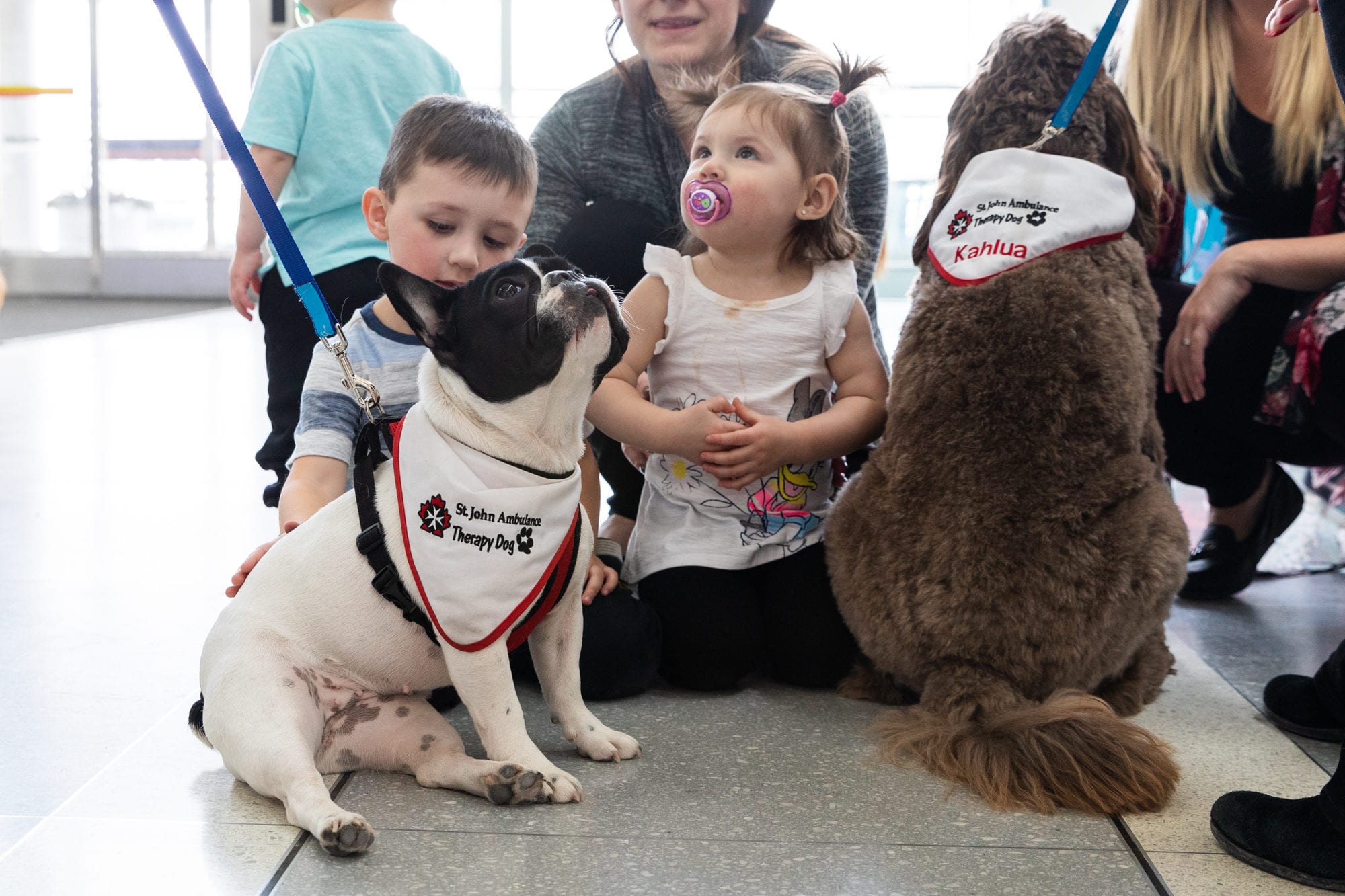