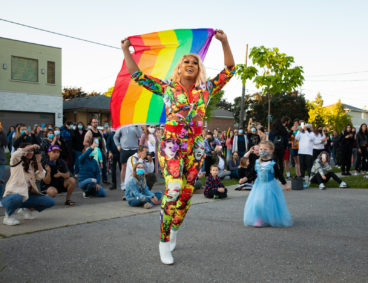 With bars closed, Toronto entertainers are producing extravagant performances on sidewalks and in courtyards for neighbours and friends

Sofonda Cox has been working as a drag queen in Toronto for two decades. When the pandemic hit and the bars shut their doors, she was forced to find alternative ways to perform and make her rent. This summer, she’ll be performing curbside with a few colourful friends.

“I’m originally from the Philippines and moved to Toronto when I was 12. I taught myself how to dance from watching music videos. In the ’90s, I performed on Electric Circus on CityTV. That’s where I was first introduced to the Toronto nightlife scene—and drag queens. One weekend in 1999, there was a party at RPM with free entry if you dressed up in drag. I sewed outfits for myself and other dancers on Electric Circus, so I happened to have a couple options. I wore a fun fur cowboy hat in red with black zebra stripes, a matching bra in the same material and a black PVC mini skirt. A friend of mine put me in make-up and did my hair. I was hooked. 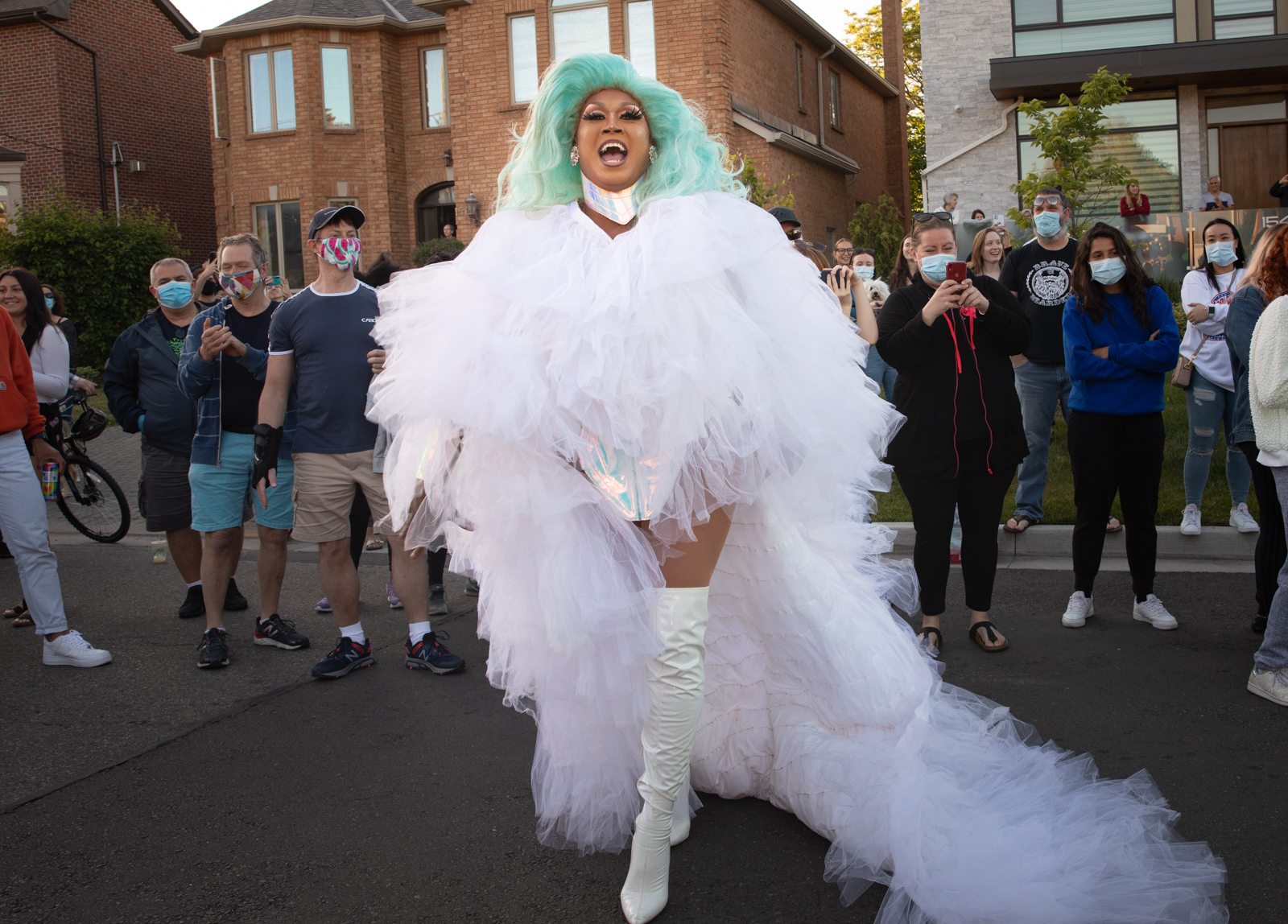 “In 2000, I started my career as a drag queen by entering competitions. I’ve been performing for 20 years, and I haven’t needed a day job since. I live in an apartment in the Village, so it’s easy to get to and from shows. Before the pandemic, I worked regularly at spots around the city like the Drink, El Convento Rico and Woody’s. Some days I would have three or more shows on a Saturday. Every couple of months, I put on a show at the Danforth Music Hall with other queens. We would pack the house with 700 to 800 people.

“When the pandemic hit, all my friends in the nightlife scene—entertainers, artists, bartenders—lost their jobs. The pandemic hurt the gay community because the bars and clubs where we congregate is our safe space, and it hurt our economy as well. A couple of weeks into the pandemic, I started doing virtual shows every Saturday for nine hours straight. At the top of every hour starting at 1 p.m., I perform for 20 minutes in front of two phones livestreaming to Instagram and Facebook. I change my costume for every performance, and I average about 500 views per set. Working at home is weird, but I’m making it work.

“The shows are free to watch and I’m not guaranteed any tips, but people have been generous online. They give me donations via PayPal and Interac. As a drag queen, I have to hustle or else I won’t be able to pay my rent. I get CERB but it can only help so much with groceries, bills, electricity. 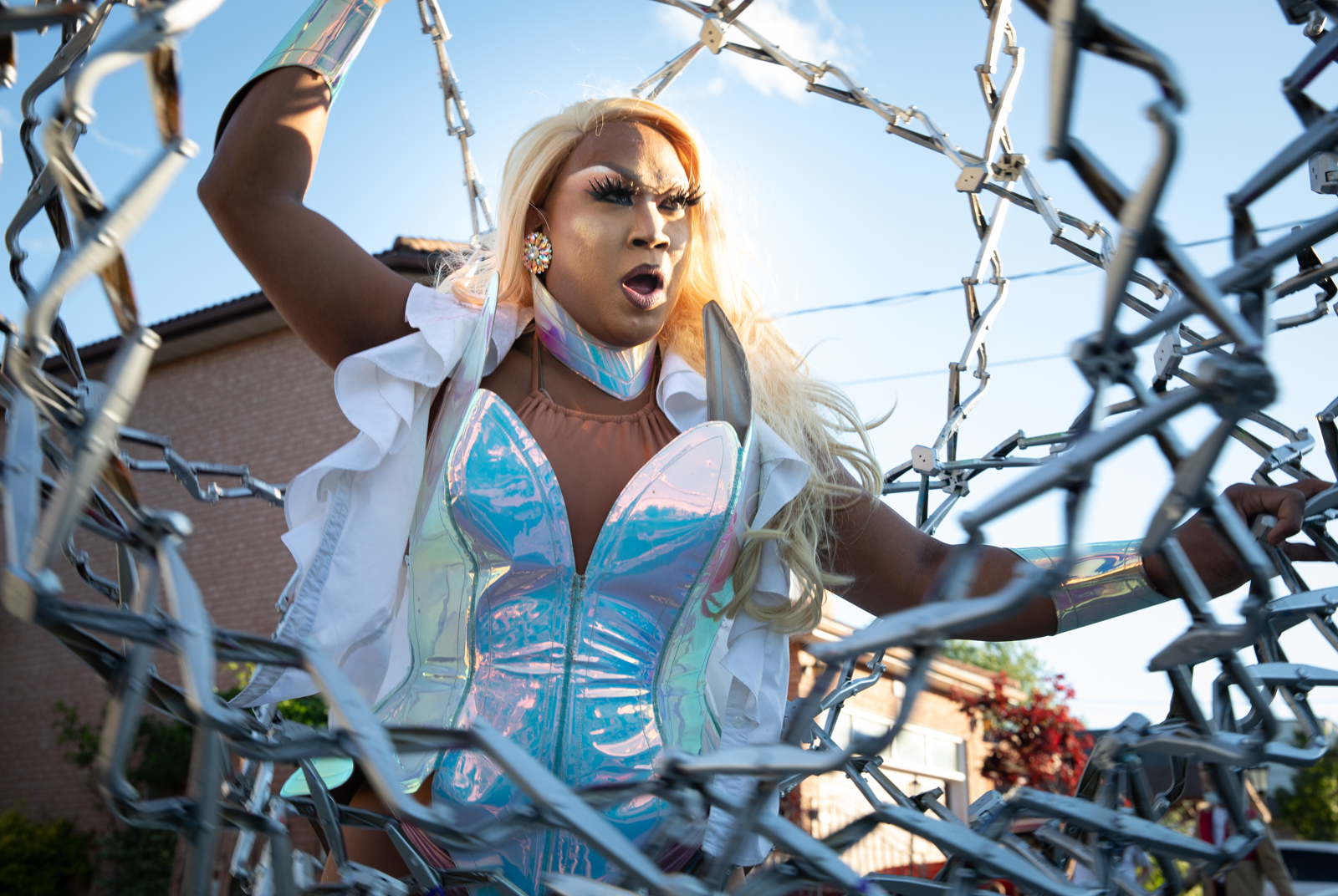 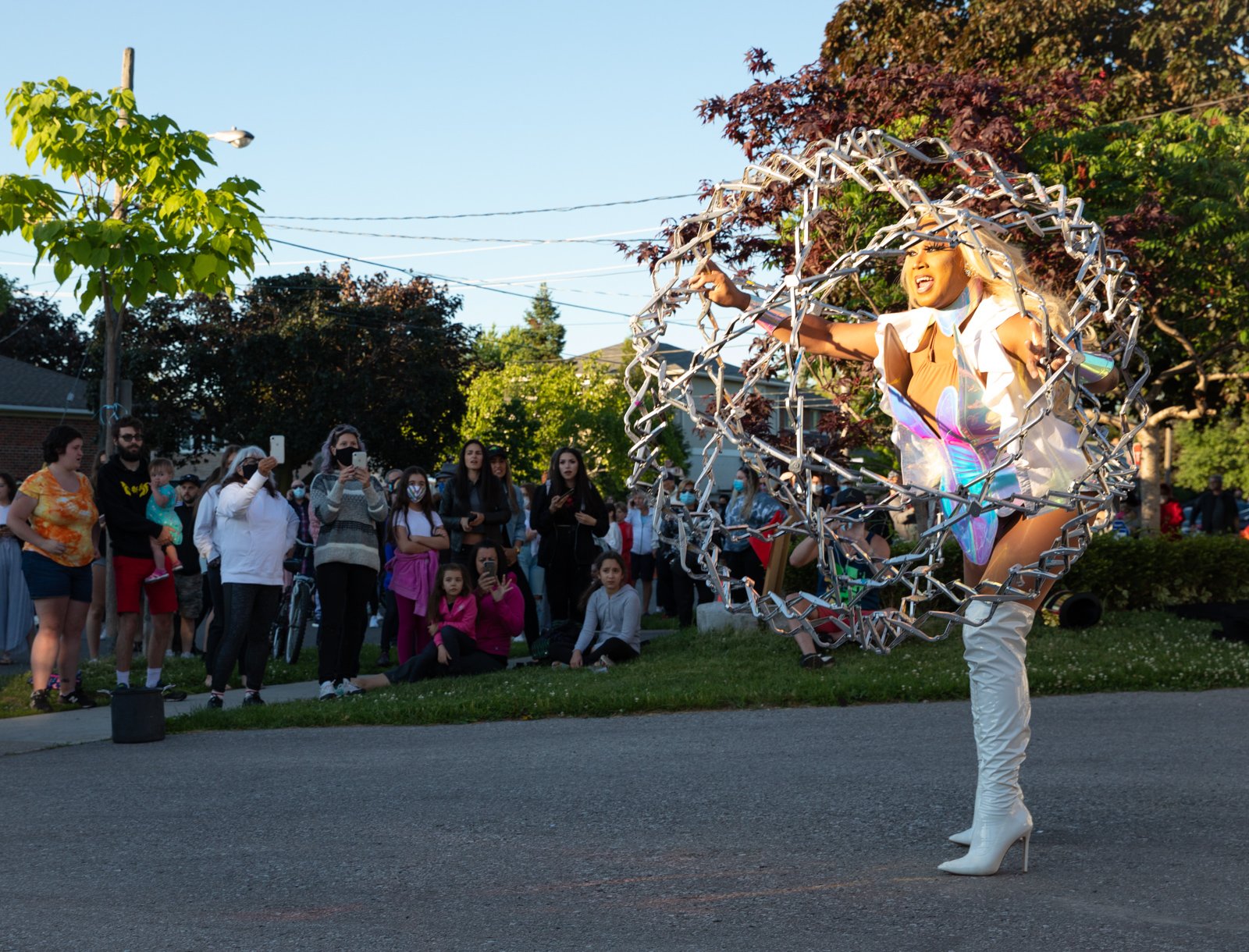 “I’m limited by what I can do online. I’m working in a small space, so instead of full-stage dance routines, I’ve added comedy and skits to my performance. I also made neon yellow and green cheetah print backdrops to keep people engaged. I have an arsenal of costumes, which helps a lot. Early on, when ring lights were all sold out, Sodastream, one of the companies I work with, sent me one to improve my production value.

“In April, my friend Josh Petrie—a new queen who goes by the name Jessyca Prosecco—and his partner, Sean Teperman, invited me to their North York home to do drag. Each evening at 7:30 p.m., the neighbourhood stepped outside to applaud their front-line workers, and Sean and Josh thought, Why not go outside in a wig and a dress? Now, they’ve been doing a show every Friday for the past two months. 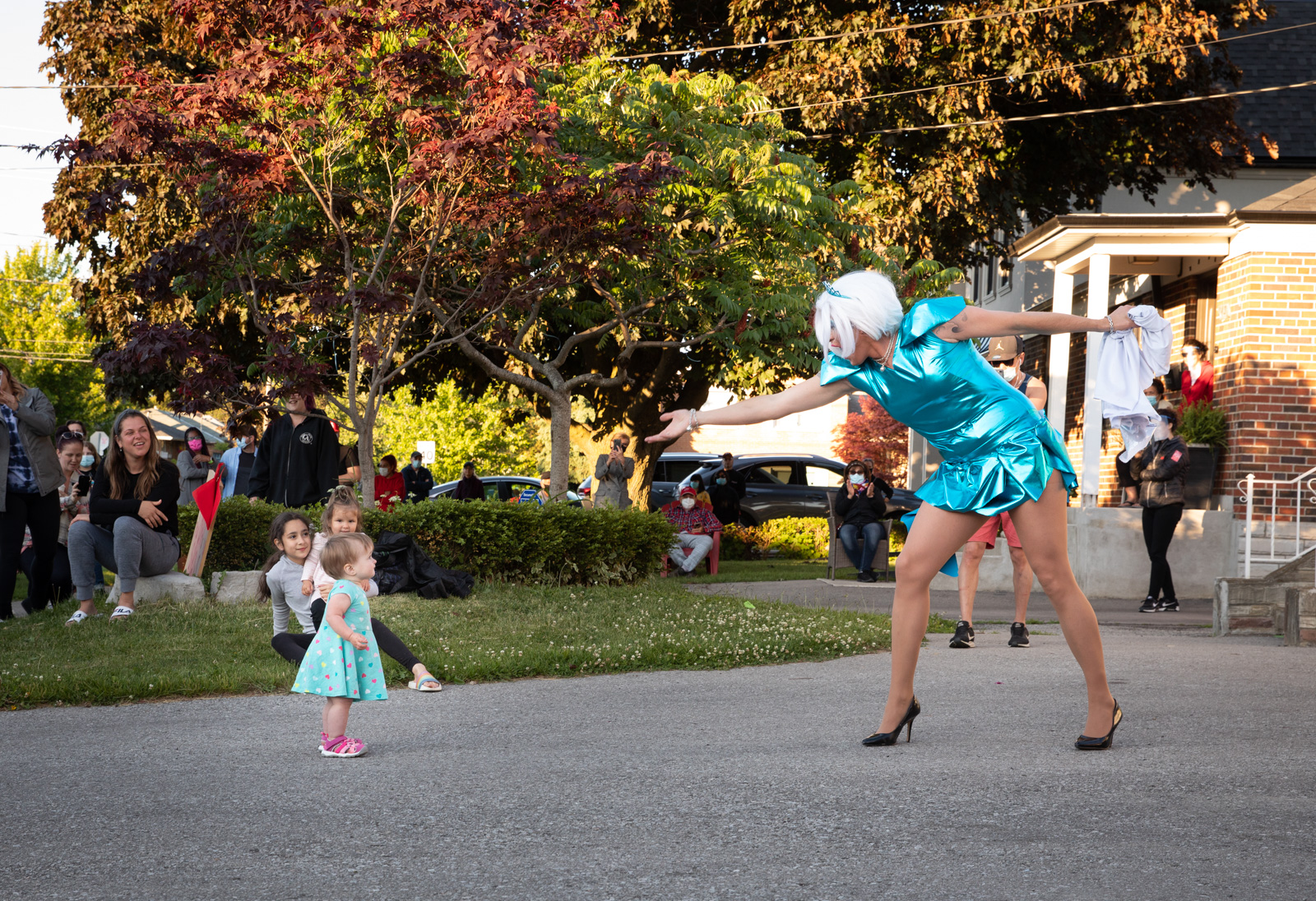 “For the curbside drag shows, I get ready at home and they uber me there. Jessyca is a health care worker so they are very health conscious. Air kisses only. They gave me five different masks, a full bottle of sanitizer gel plus my own room and washroom to change in.

“We try not to advertise their address out of respect for the neighbours, but people can watch every week on Facebook Live or Instagram Live. Before the shows, we hand out masks and make sure people are properly distancing. Sometimes they bring other guests, too: a few weeks ago, a Niagara queen named Hairyetta came to perform. Last week, for my birthday, Sean and Jessyca got me a cake, and they paid for an ice cream truck to treat all the neighbours. 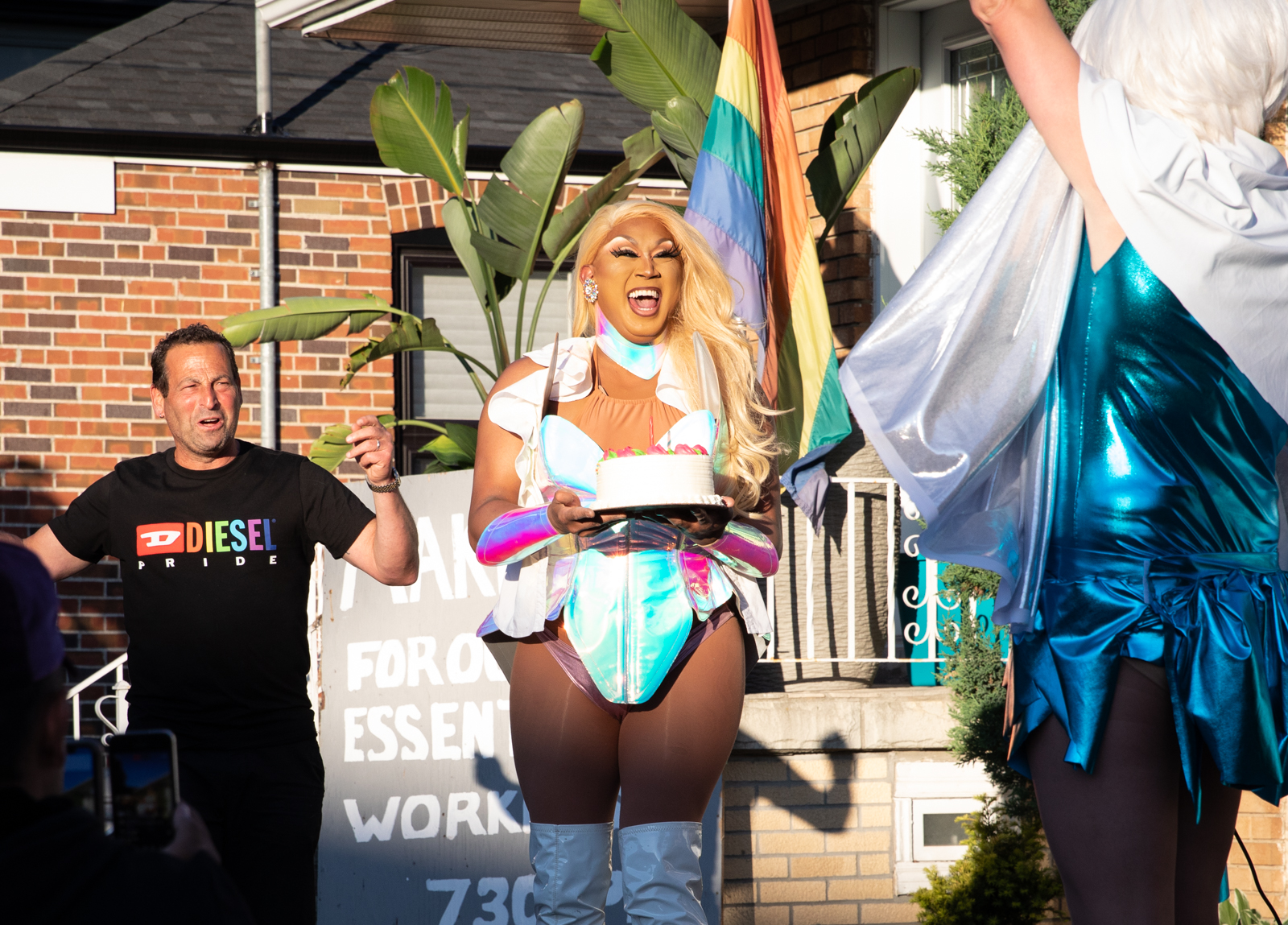 “It’s a 30-minute show, and we interact with the audience and change our costumes multiple times. Jessyca and I perform duets together like ‘No More Tears (Enough is Enough)’ by Barbra Streisand and Donna Summer—and we also perform solo. At first, we weren’t collecting tips, but then people were knocking on Sean and Jessyca’s door trying to give us money. So now we pass around a bucket. We donated some of those tips to FoodShare, an emergency food program affiliated with Black Lives Matter, two weeks ago and last week, we donated to SickKids.

“I had spent months in quarantine performing in a cramped space, so getting out on the street was liberating, but it also has its challenges. In the clubs, we control the lighting and the audience is always over 18. When I perform outside, the sunlight can melt my makeup, and I have to make sure my shows are family-friendly. But seeing kids enjoying drag gives me hope for a brighter, more inclusive future. 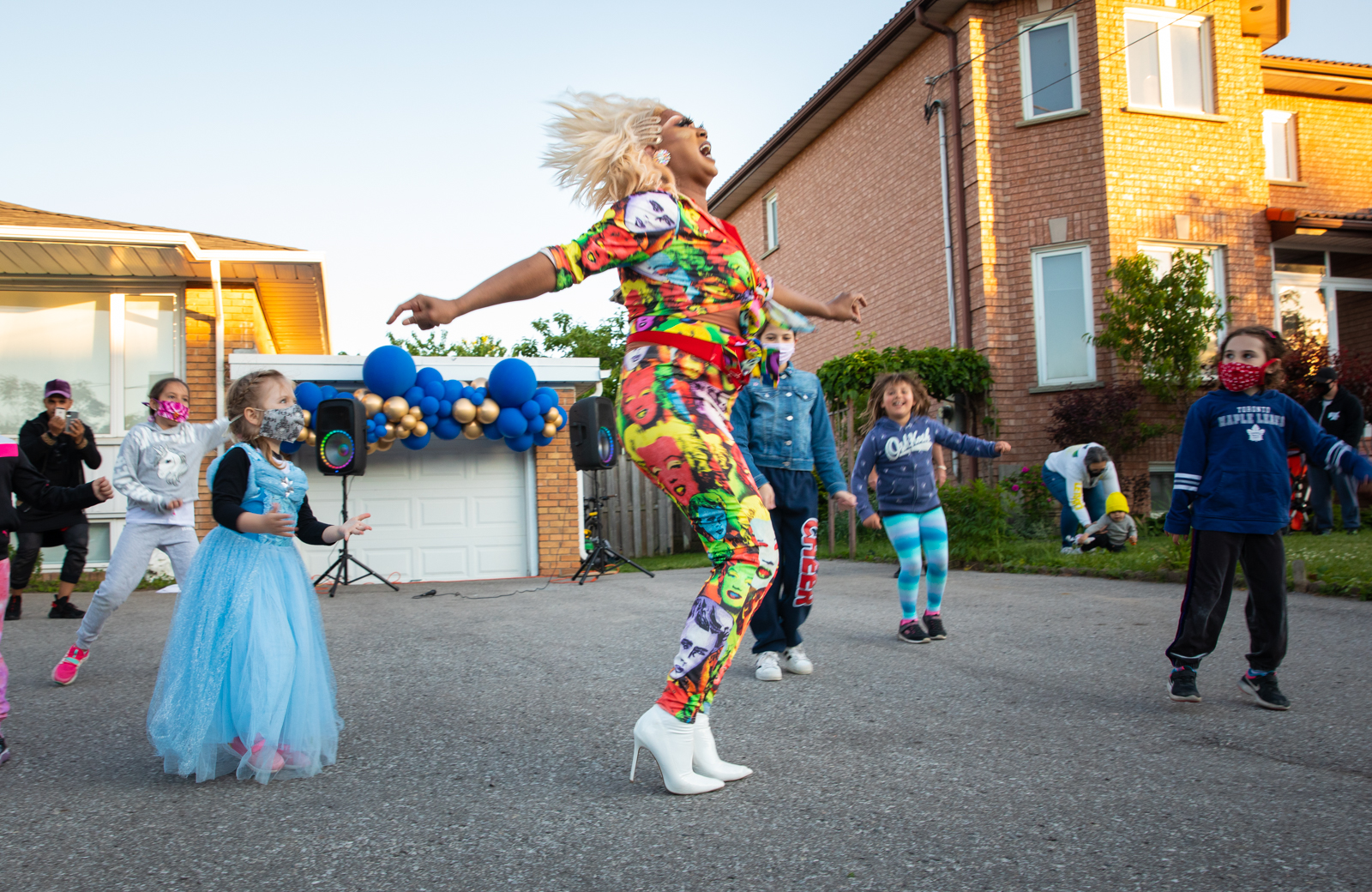 “I call Pride the New Year’s of drag. That’s when we get to show off our talents and our fabulous colours. I usually plan out all of June three months in advance. Every year, I do a show at the Prism Festival, a multi-day event at Rebel. There are 20 dancers and we spend months working on choreography, making our costumes and setting up LED screens. This year, it was all cancelled.

“At the same time, Pride is about connecting with people, and we’ve found ways to connect with our audiences virtually. Organizations have also been calling me to promote products in their Pride campaigns, which is nice. Next week, I’ll be busy doing corporate events online with companies like Sodastream, Rogers, TD, the Black Gay Men’s Network, the Prep Clinic, the National Gay Pilots Association, CPP Investments and Breakfast Television. 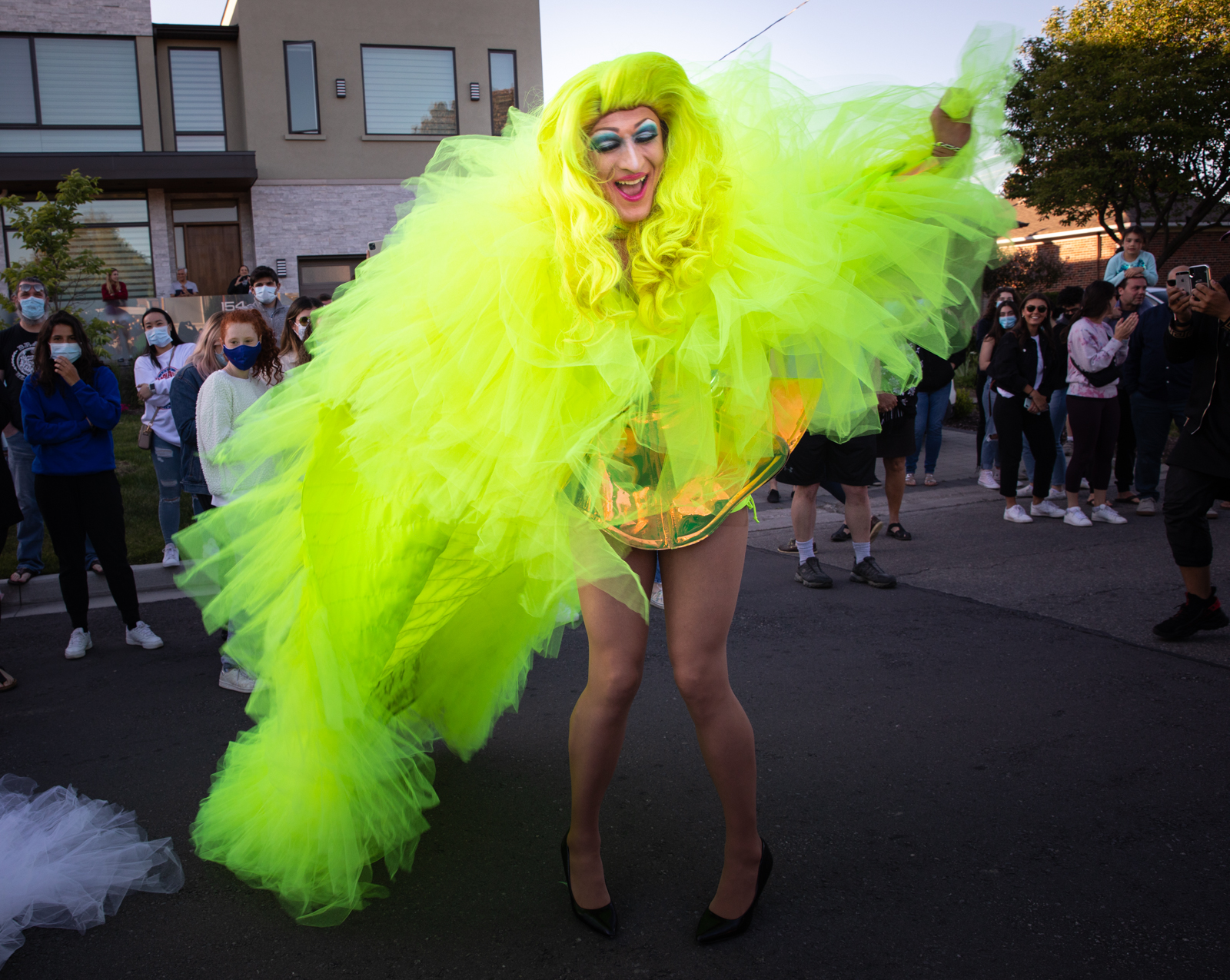 “The city may be reopening, but I’m guessing bars will be the last to open. Perhaps having larger shows in huge parks can allow for social distancing, but that hasn’t been discussed, either. For now, everything will have to be done virtually and curbside.

“I’ve been experimenting with the limits of what’s possible. My apartment complex near Jarvis and Isabella has a shared courtyard with public access. It has great acoustics. I tried a backyard show last week and that was a success. About 100 people attended, and my neighbours watched from their windows and balconies that face the courtyard.

“I performed pop favourites like Lady Gaga’s ‘Born This Way,’ Whitney Houston’s ‘I Wanna Dance with Somebody,’ Beyoncé’s ‘Crazy in Love,’ and The Weather Girls’ ‘It’s Raining Men.’ I’m planning to invite a bunch of queens and continue the show after Pride week. I’ll call it ‘From a Distance, Quarantine Queens Unite.’ ”