Inside The Workaround, an east-end co-working space with built-in childcare

Inside The Workaround, an east-end co-working space with built-in childcare 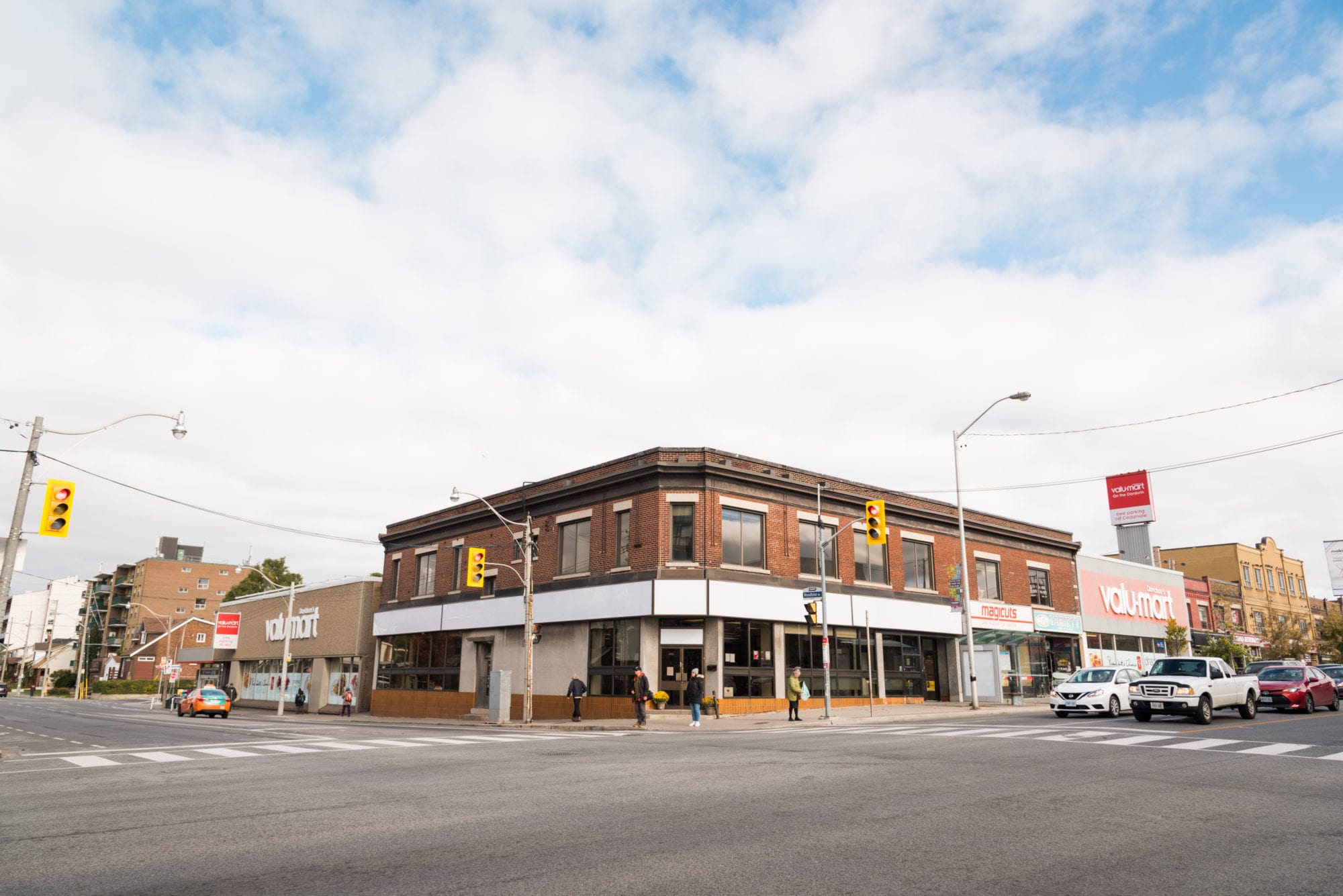 The Workaround launched this fall in a former bank building at Danforth and Woodbine. Like other co-working spaces around the city, it caters to busy freelancers who prefer not to work from home. Unlike those other places, though, The Workaround has something extra: affordable, on-site daycare. There are a few membership options for adults, including an unlimited package for $318 per month, and childcare is always an additional $10 per hour on top any membership fees.

Founder Amanda Munday came up with the idea while she was working as marketing manager for HiMama, a childcare app that lets daycares provide digital updates to parents. She worked part-time from home after her second child was born, but found it hard to maintain focus with toddlers nearby. The waitlists for expensive east-end childcare spots—which she only needed a few days a week, anyway—were ages long. “I wanted to thrive in my tech career and do it without giving up my time, or paying thousands in daycare costs,” Munday says.

After leasing the space in the spring, Munday spent months making it as pretty and as parent-friendly as possible. Now, it has everything moms and dads need for peak productivity: instead of free beer on tap, there’s a freezer to store breast milk. Instead of ping pong tables, there’s a quiet nap room with a hammock. Munday employs three early childhood education specialists, who have a separate toy-filled childcare facility downstairs where they plan programming for the kids (think crafts and reading workshops). With drop-in rates available, the space is also a workable last-resort for when the nanny calls in sick.

The co-working space spans 4,100 square feet. Because it used to be a bank, there were already built-in glass-walled offices when Munday took possession, but she added new wooden floors, painted the space navy and cream and covered the walls with work from local artists. Her husband built the extra-wide tables: 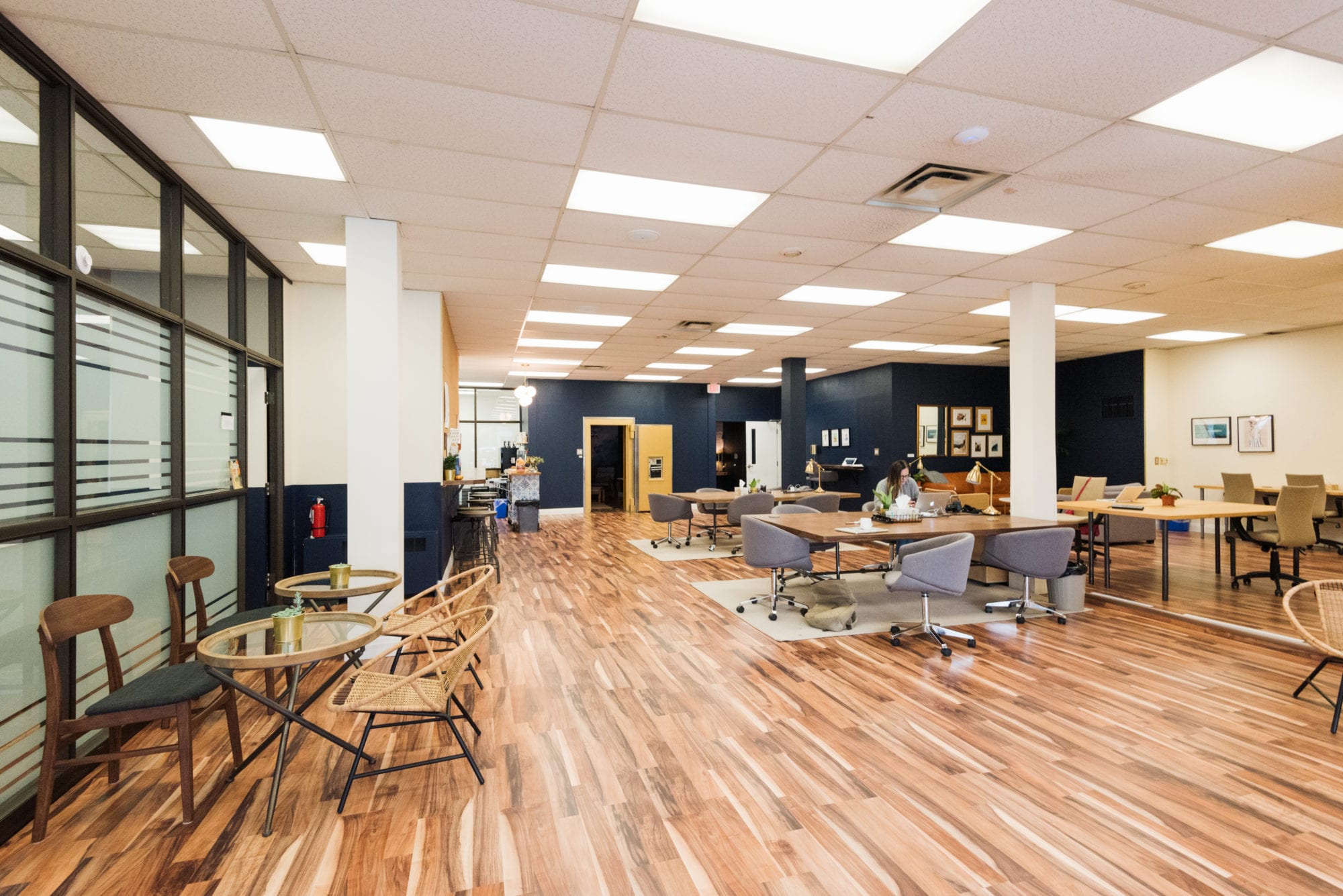 Munday was determined to find a main-floor space because she knew members would be dealing with strollers. They can park them here: 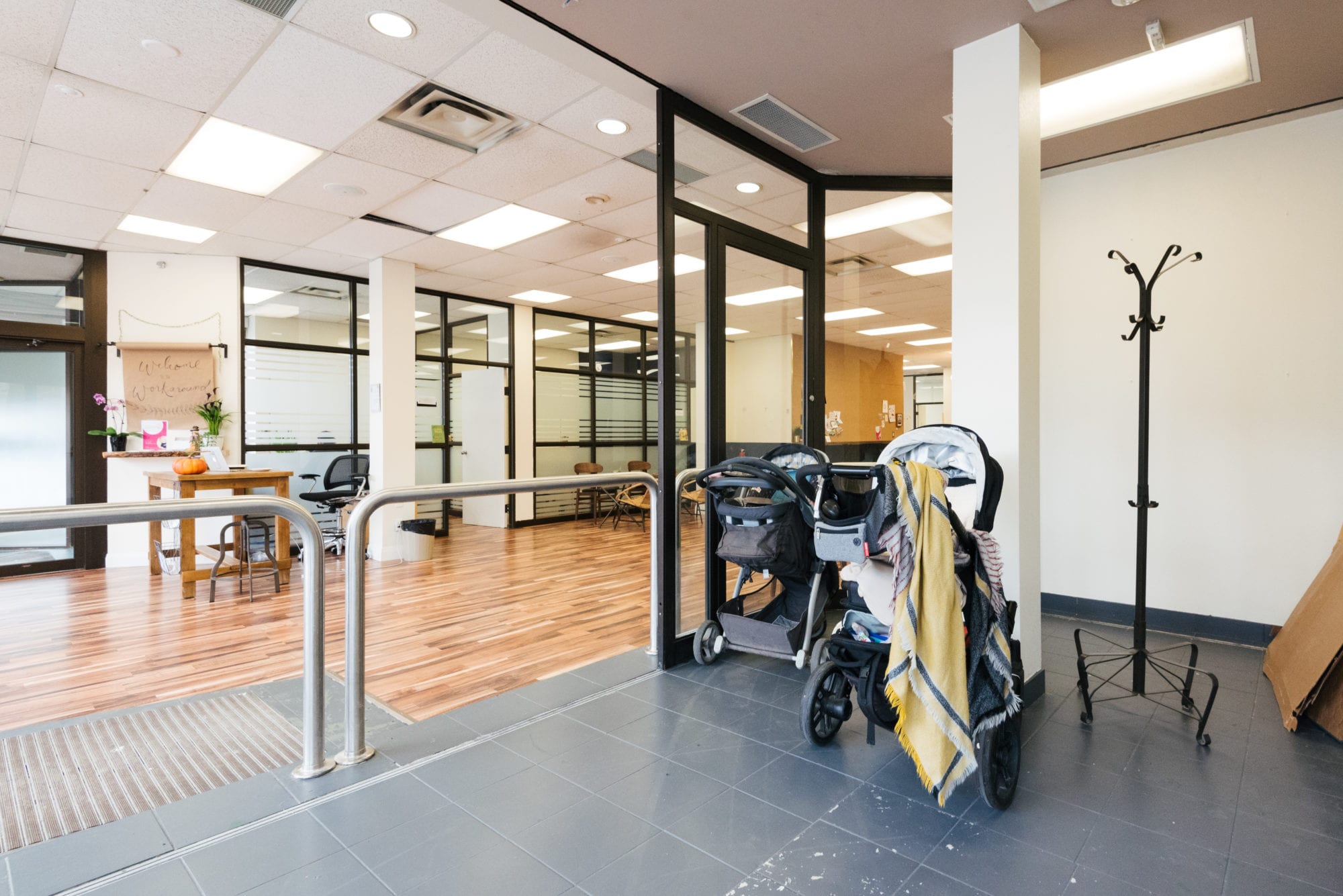 Munday worked with Kelly Davidson, of Front Porch Studio, on the branding and design: 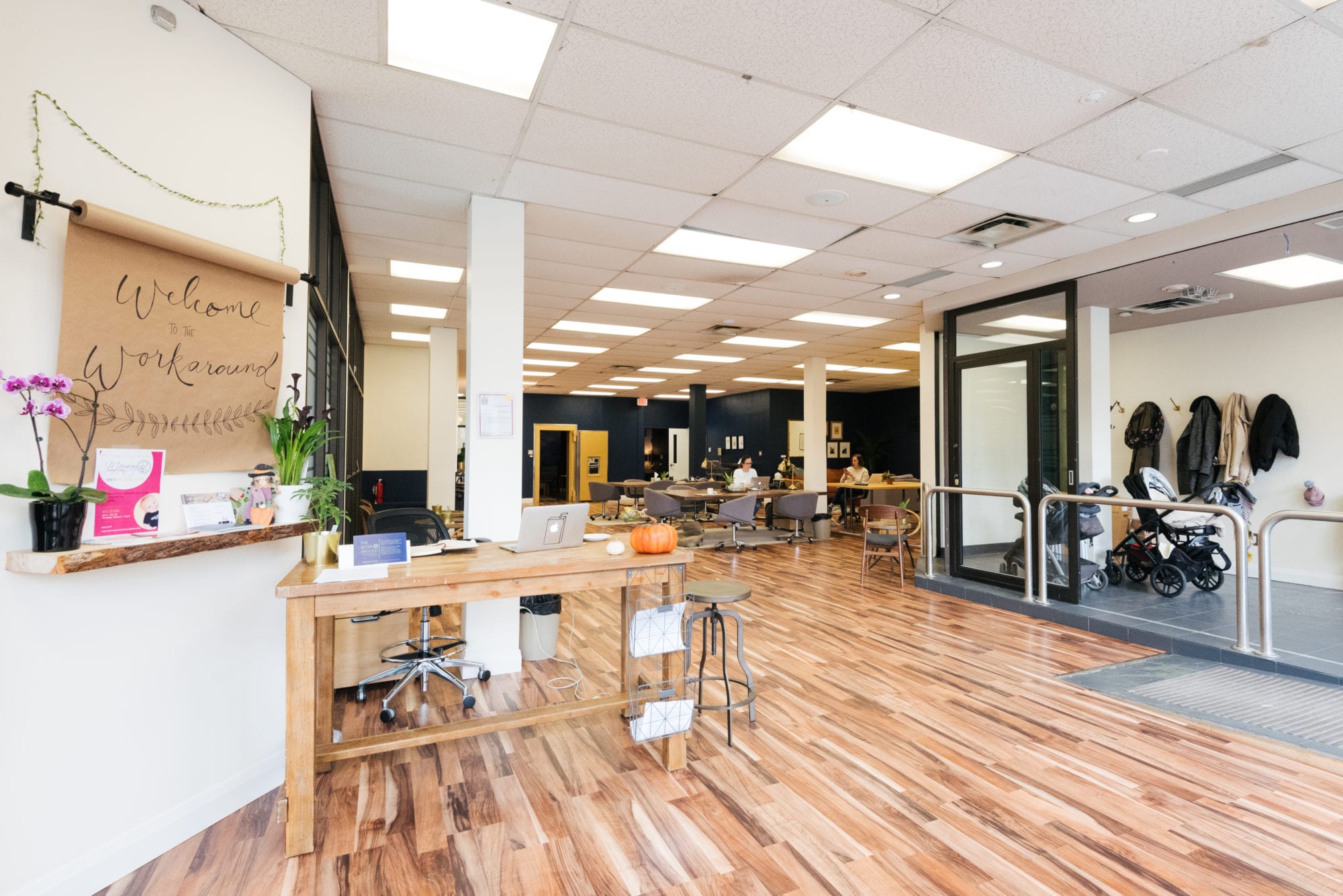 The entrance is artsy and welcoming: 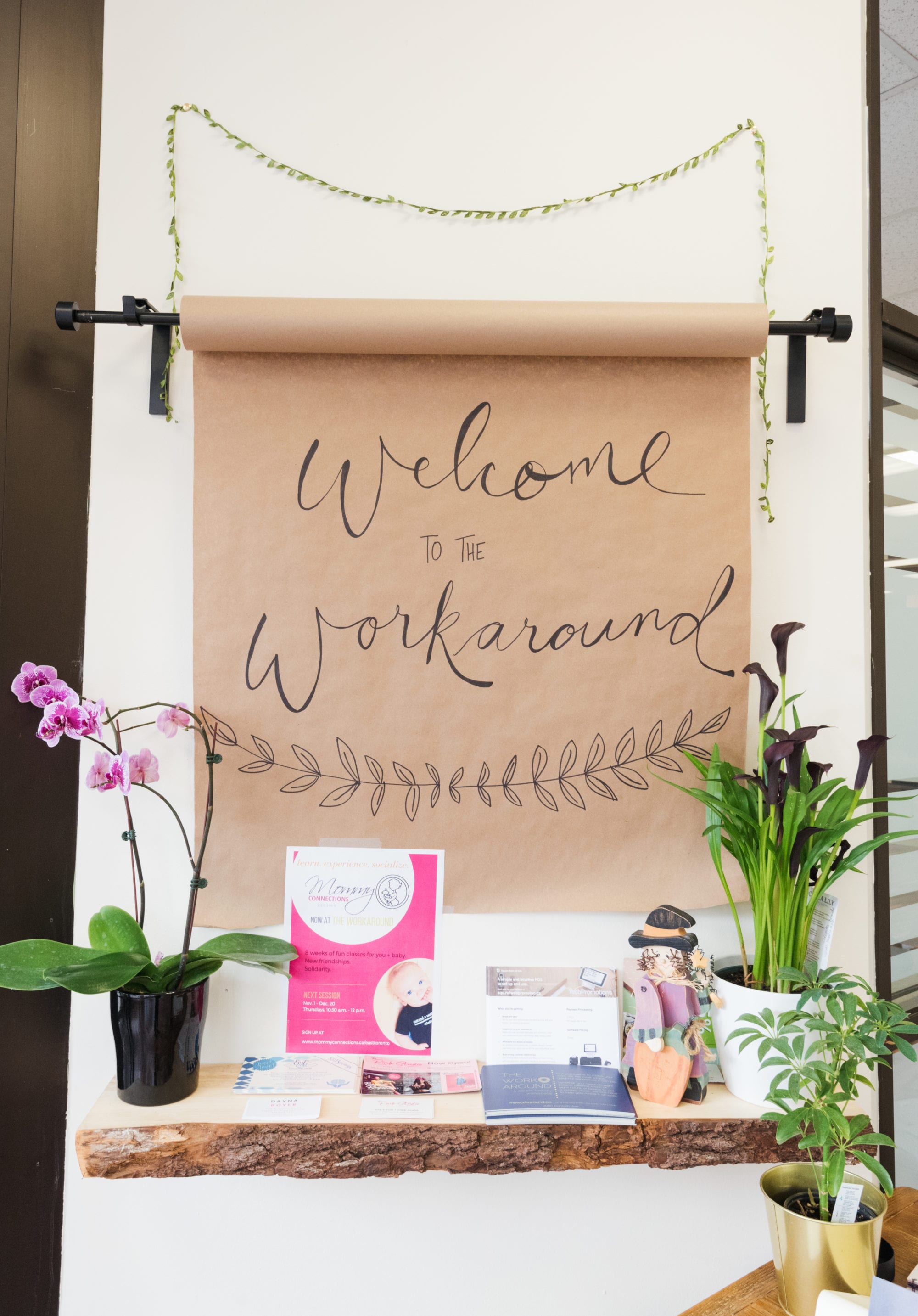 There are a number of cozy lounge spaces. The art on the walls is all from local artists: 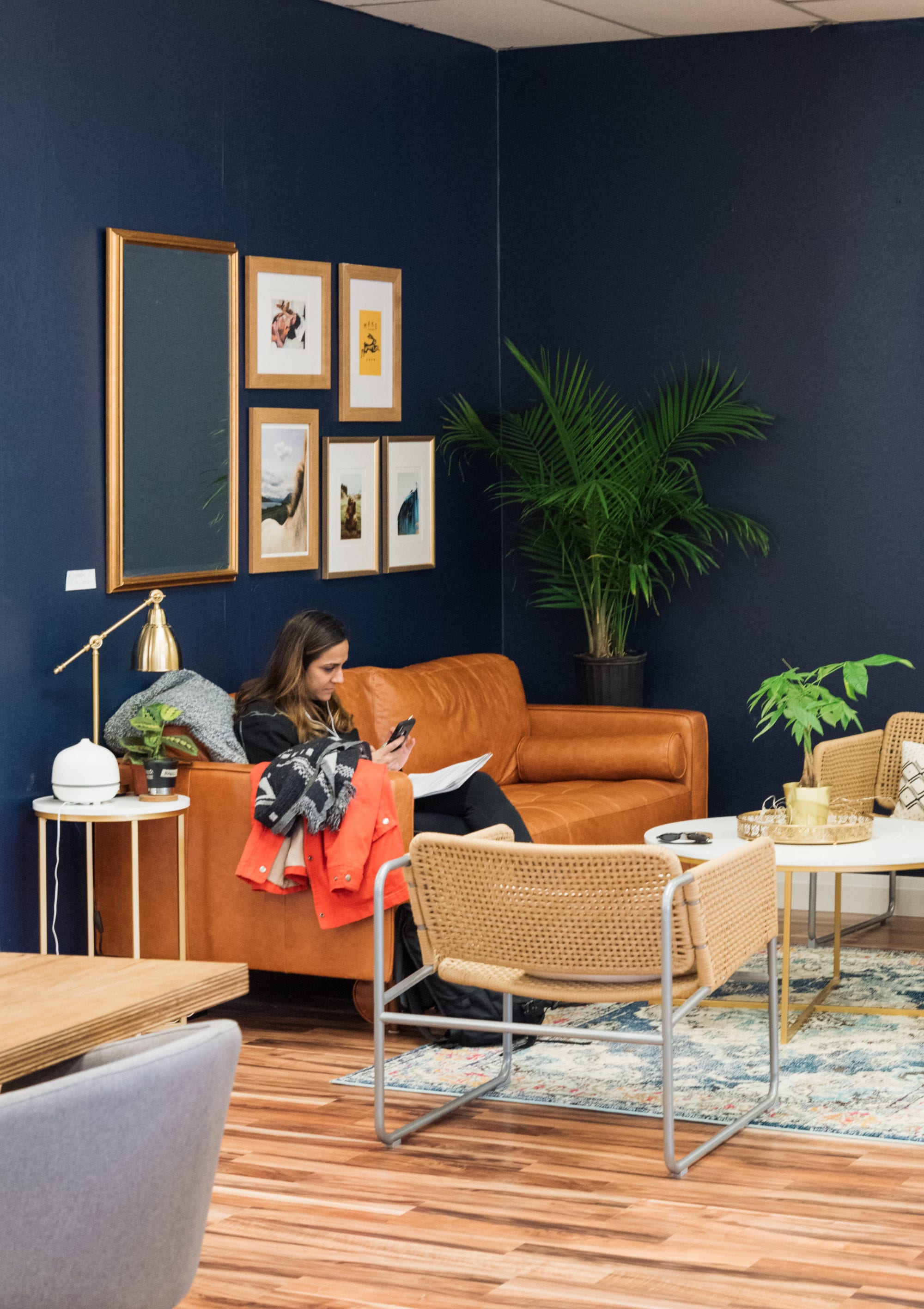 Munday sourced mini wing-backed chairs for the kids. Each meeting room is named after a children’s book: 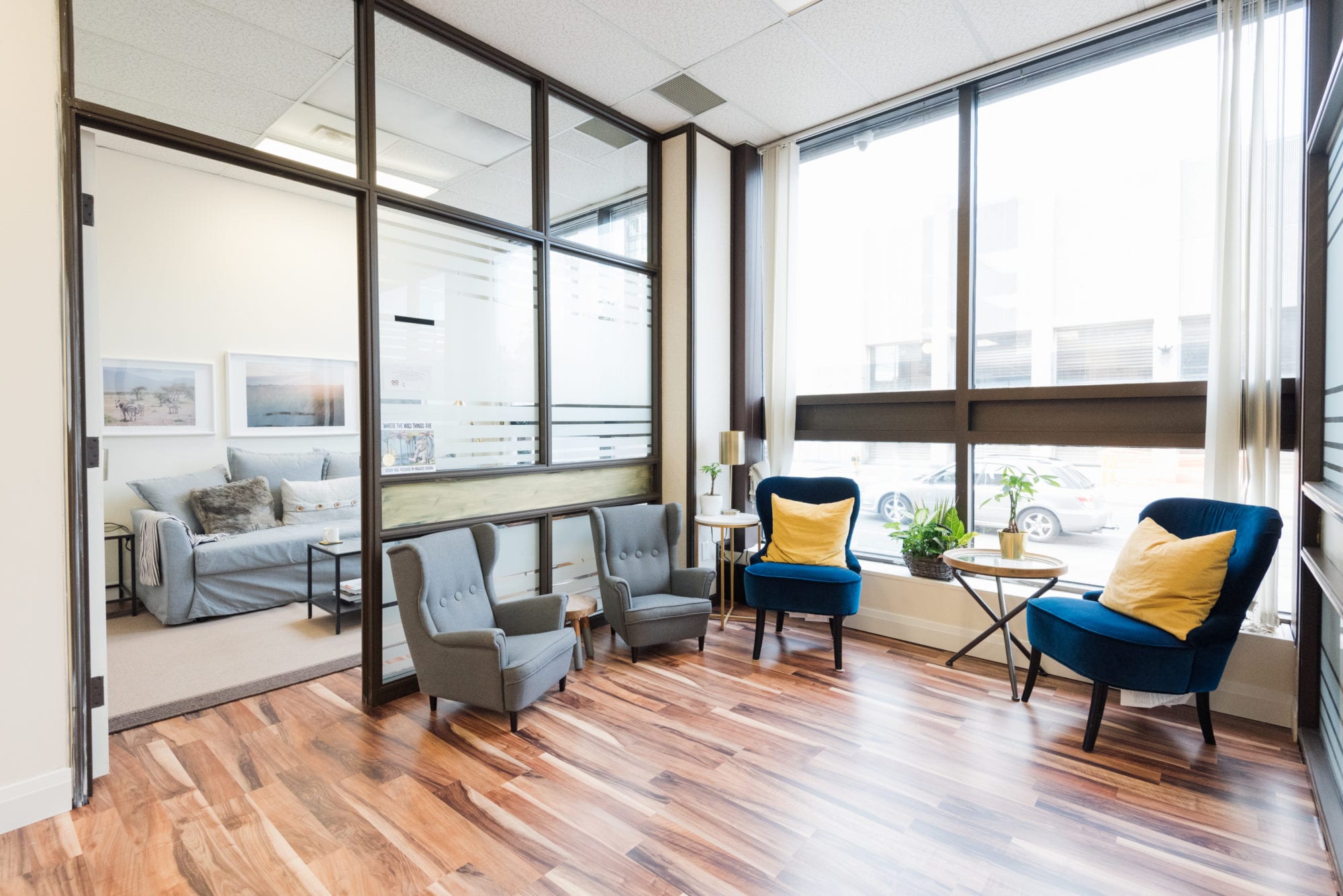 The bank’s vault is now a zen napping room (for kids and parents). It’s a tech-free zone. The mural on the back wall is a blown-up photograph from local artist Sean Ramsey: 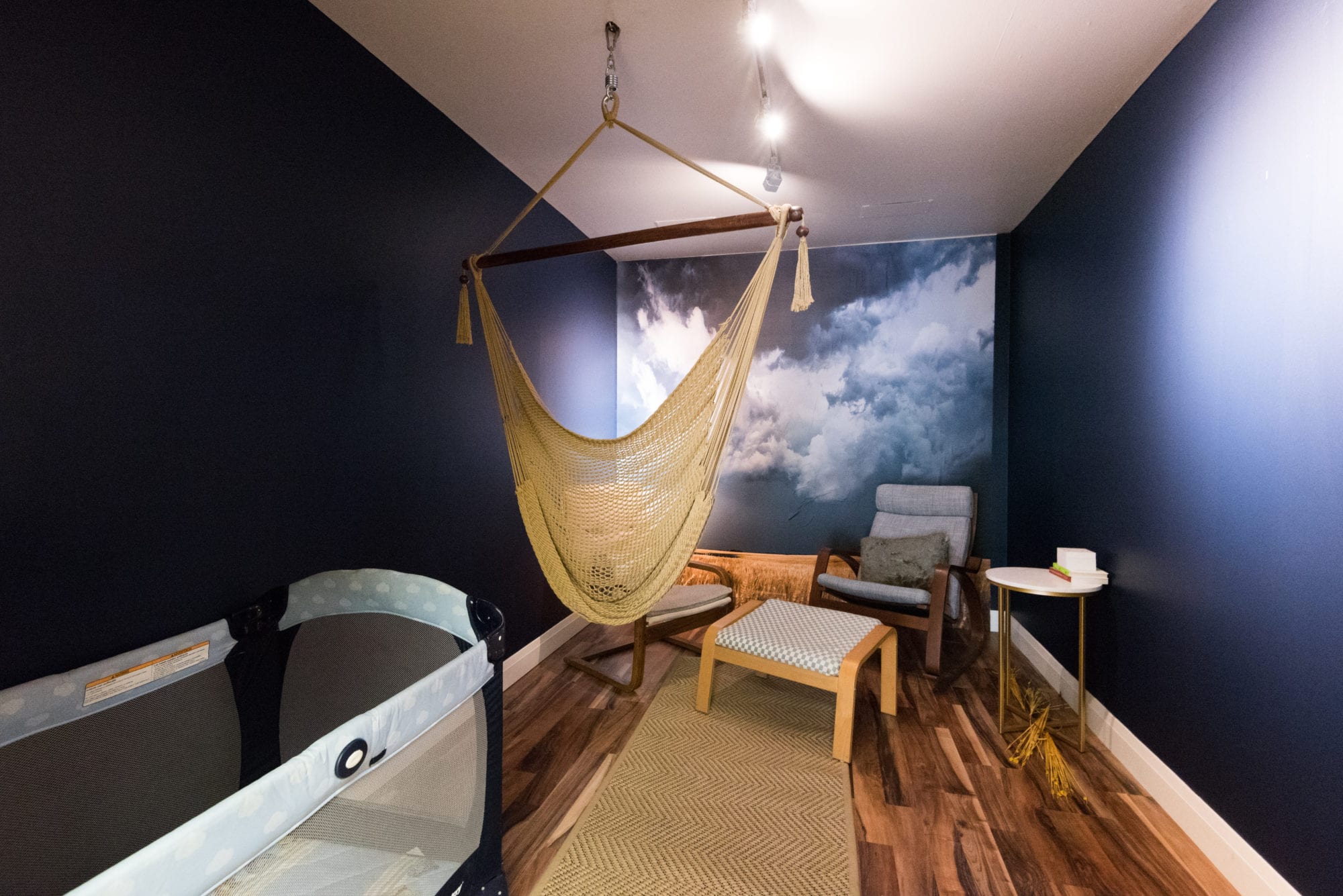 Munday provides breakfast every day, in addition to bottomless coffee and tea. “Parents forget to eat,” she says: 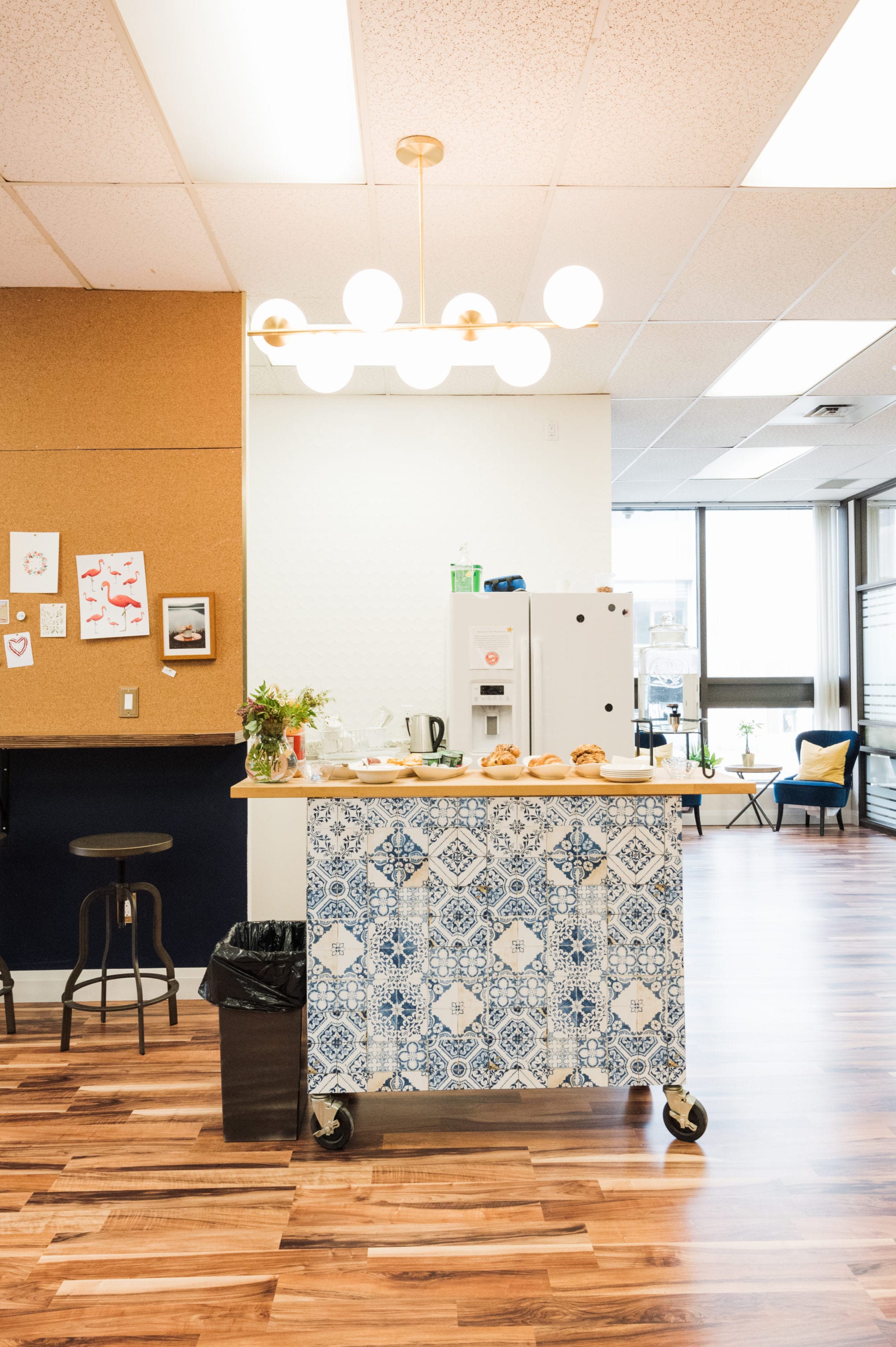 Here’s what was on the menu when we visited (it’s a nut-free environment, of course): 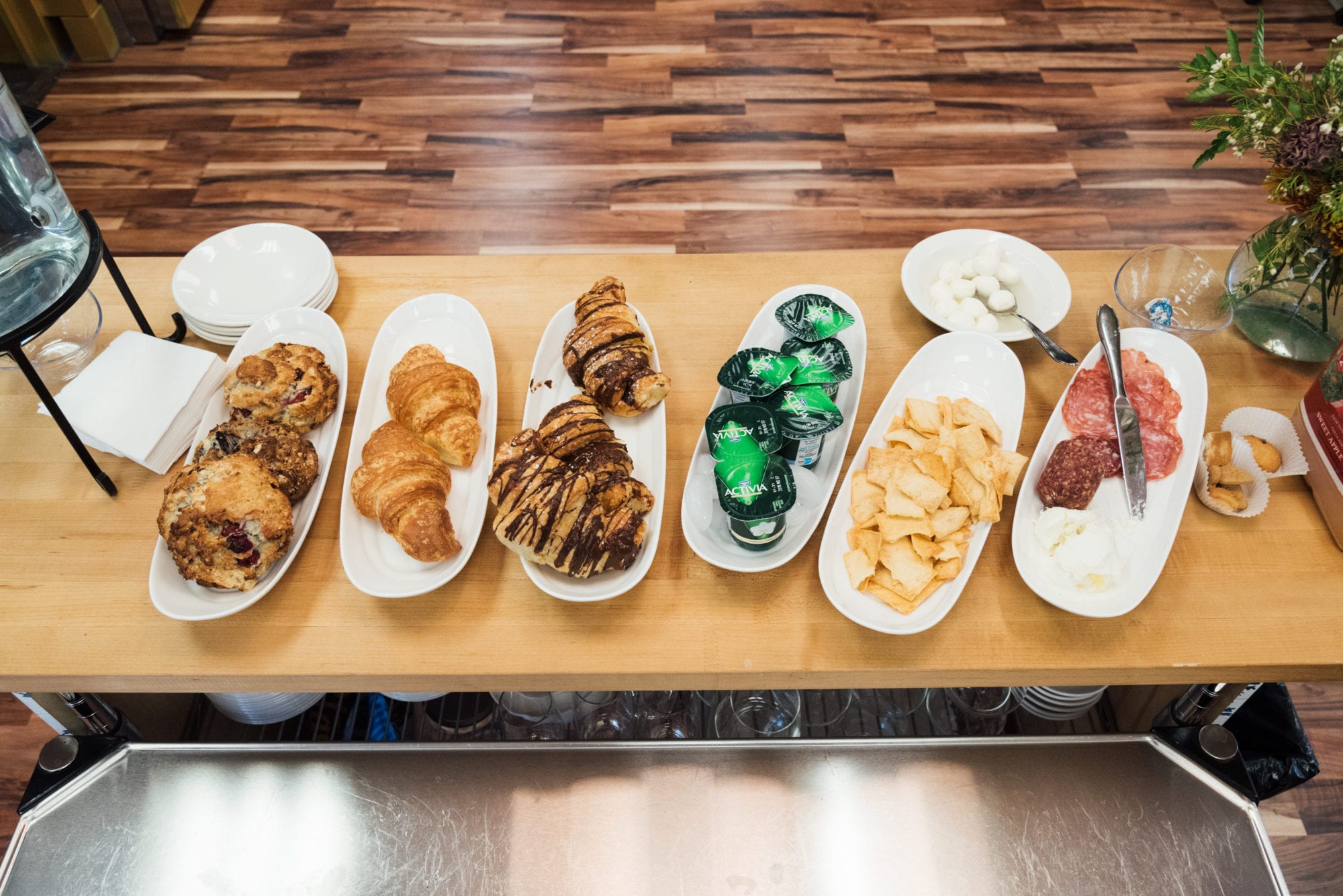 There’s also a podcast studio for members to use: 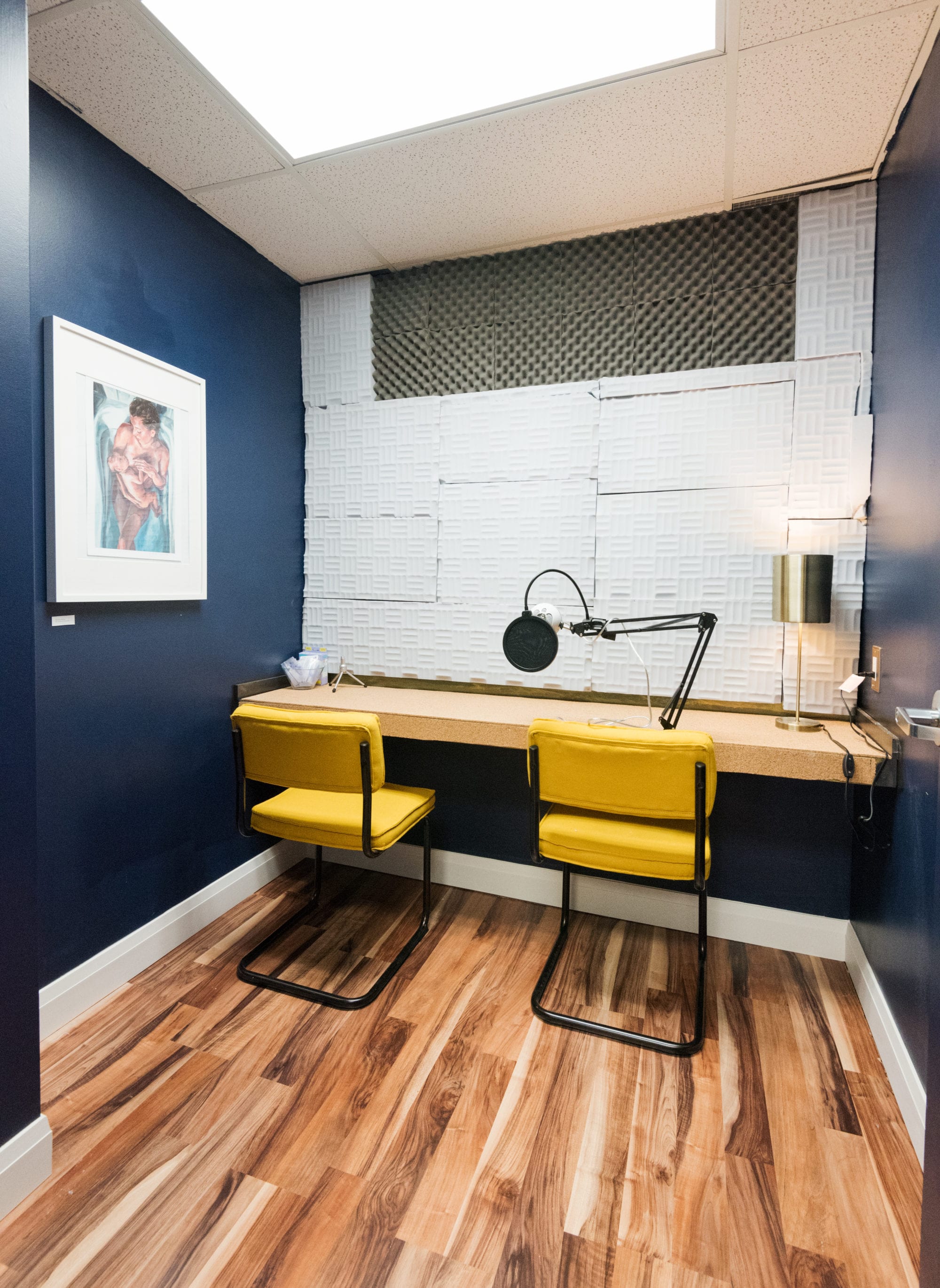 Here’s where the kids hang out: 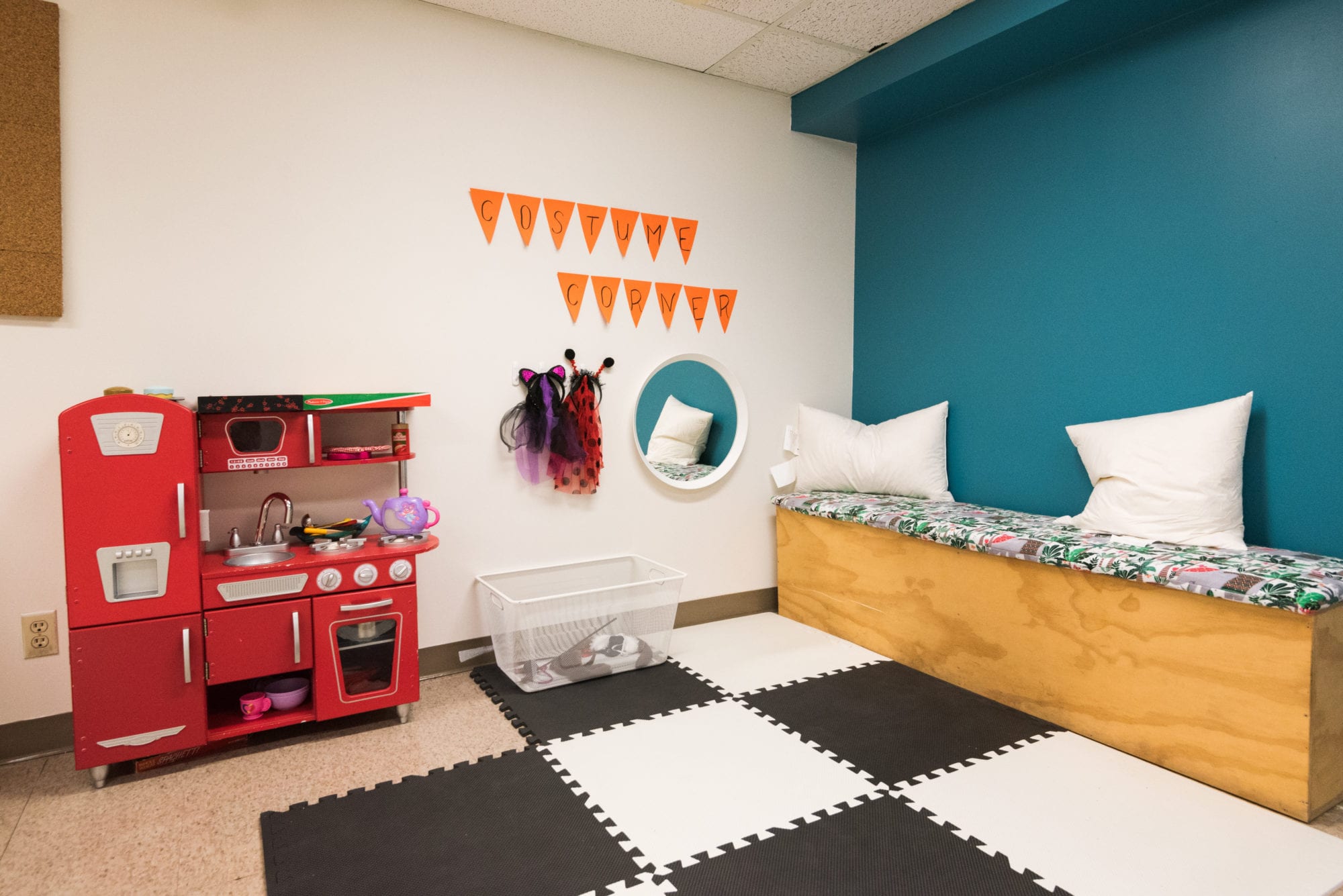 When we visited, there was a one-to-one ratio of kids to ECEs: 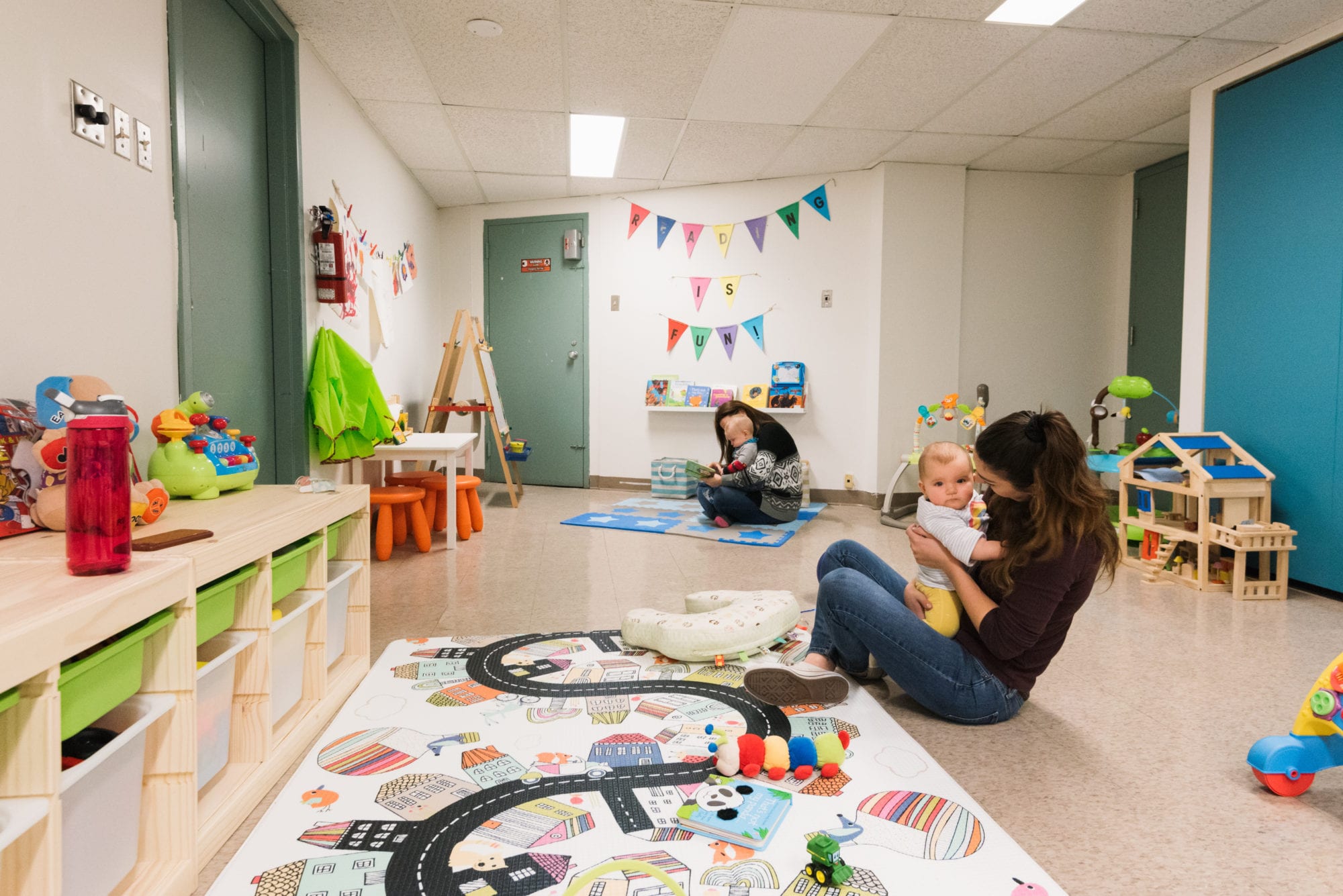 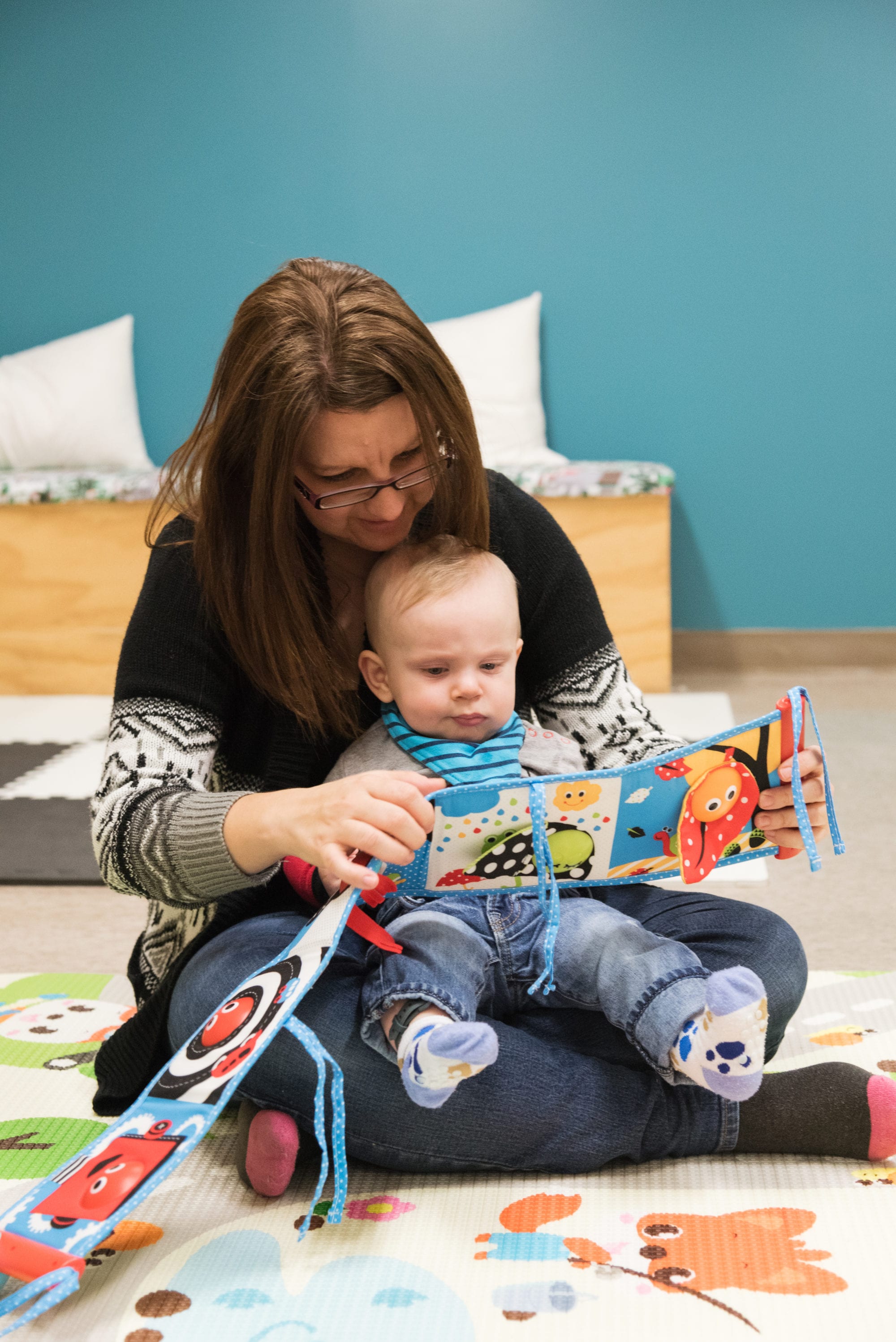 Do you know of an amazing co-working space? We want to talk to you.

This article originally incorrectly identified the person responsible for branding and design at The Workaround.