Inside Lmnts Outdoor Studio, where Torontonians can practise hot yoga in geodesic pods

Inside Lmnts Outdoor Studio, where Torontonians can practise hot yoga in geodesic pods

Yoga and fitness aficionados missing the motivational boost from in-person classes can now work up a sweat inside geodesic bubbles set up at the Stanley Barracks, a patio at Hotel X in Exhibition Place. The idea was dreamed up by Steve Georgive, one of the founders of last year’s al fresco series Dinner With a View, where diners ate gourmet meals inside clear domes underneath the Gardiner Expressway (a stunt that was poorly received by the city’s homeless advocates). The series developed into an international pop-up, travelling to Vancouver, San Diego and Montreal. Once Covid-19 hit, however, the domes were sitting idle. Three weeks ago, Steve and his business partners decided to repurpose them into fitness pods, and set up the entire operation within one month. “Most people have been doing online or Zoom workouts, and it’s just not the same thing. This allows people to interact in a safe way,” says Steve.

The pop-up has partnered with six local fitness and yoga studios, including Common Ground near Bathurst and Lakeshore, Chi Junky in Riverside, Solis Movement in Etobicoke and Mula Yoga, which recently closed its brick-and-mortar location. The pods, which are manufactured in Canada from a polycarbonate UV-protected plastic, can heat up to sauna-level temperatures when placed in the sun, creating a naturally steamy hot yoga environment. Temperatures can reach over 40 degrees Celsuis and though the UV protection will prevent any sunburns, they recommend using the provided fan to keep from overheating. They’ve sold thousands of tickets over the last five days, and are almost 90 per cent sold out. Tickets start at $28 per class, when you buy a package of seven classes. Here’s what it’s like:

Check-in is done online to reduce interactions on site. Visitors get their temperatures checked upon arrival and are asked if they’ve recently experienced any Covid-19 symptoms. There’s sanitizer available, and the pods are cleaned with disinfectant by a professional crew after every class. A deeper clean happens a few times a week: 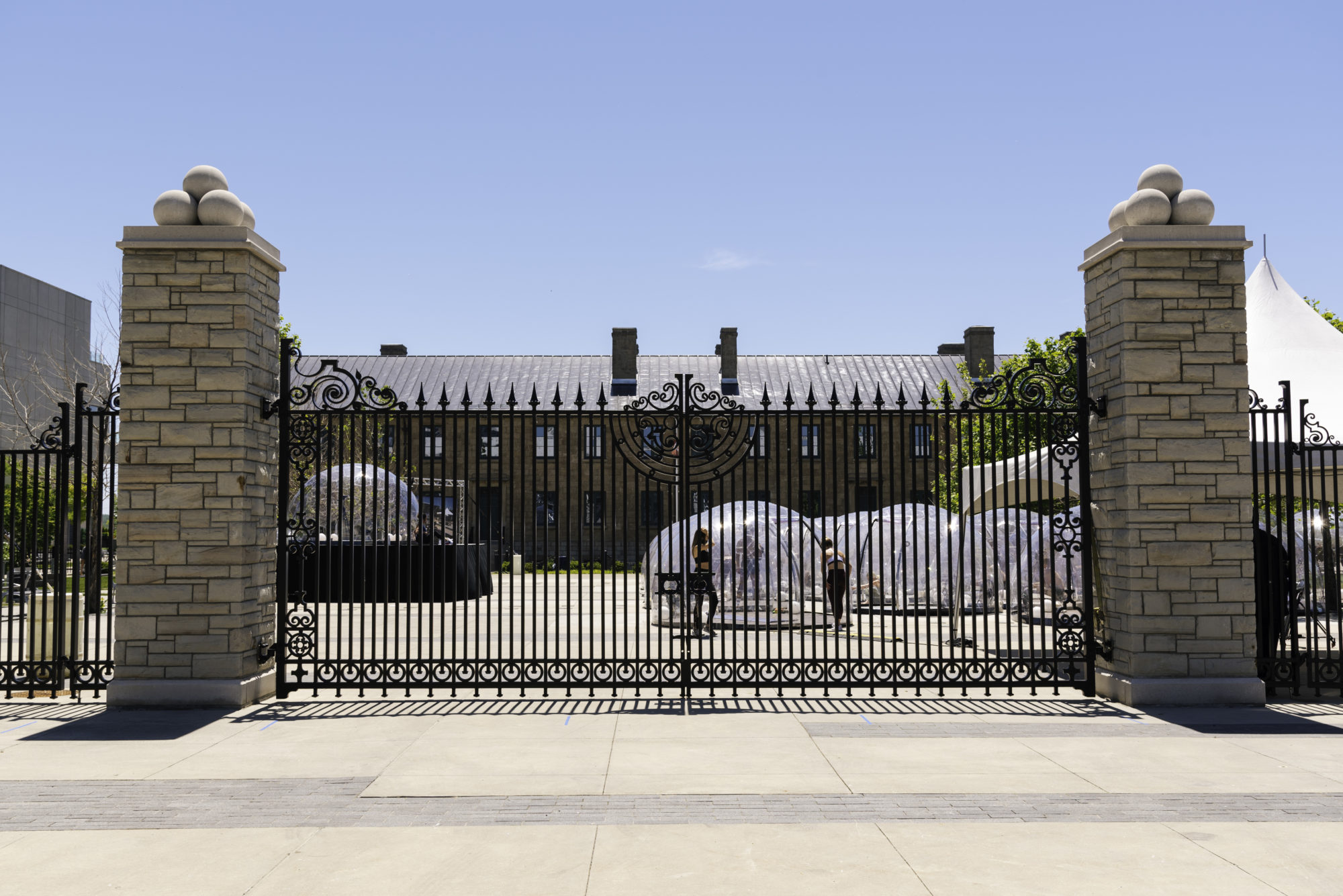 There are 50 110-square-foot domes, each of which comprises 146 pieces. They take two people eight hours to put together: 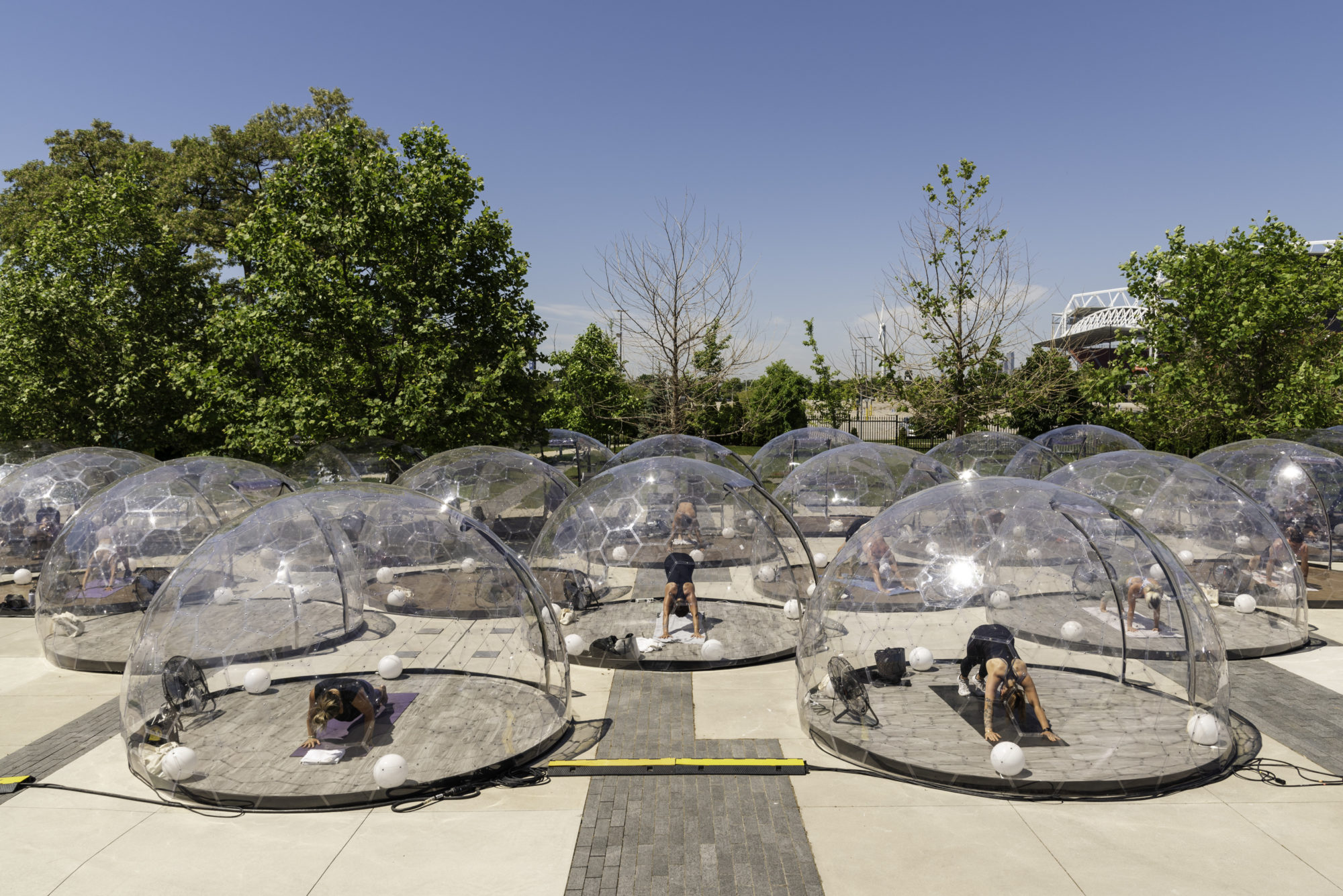 There are cooling fans inside to help control the temperature: 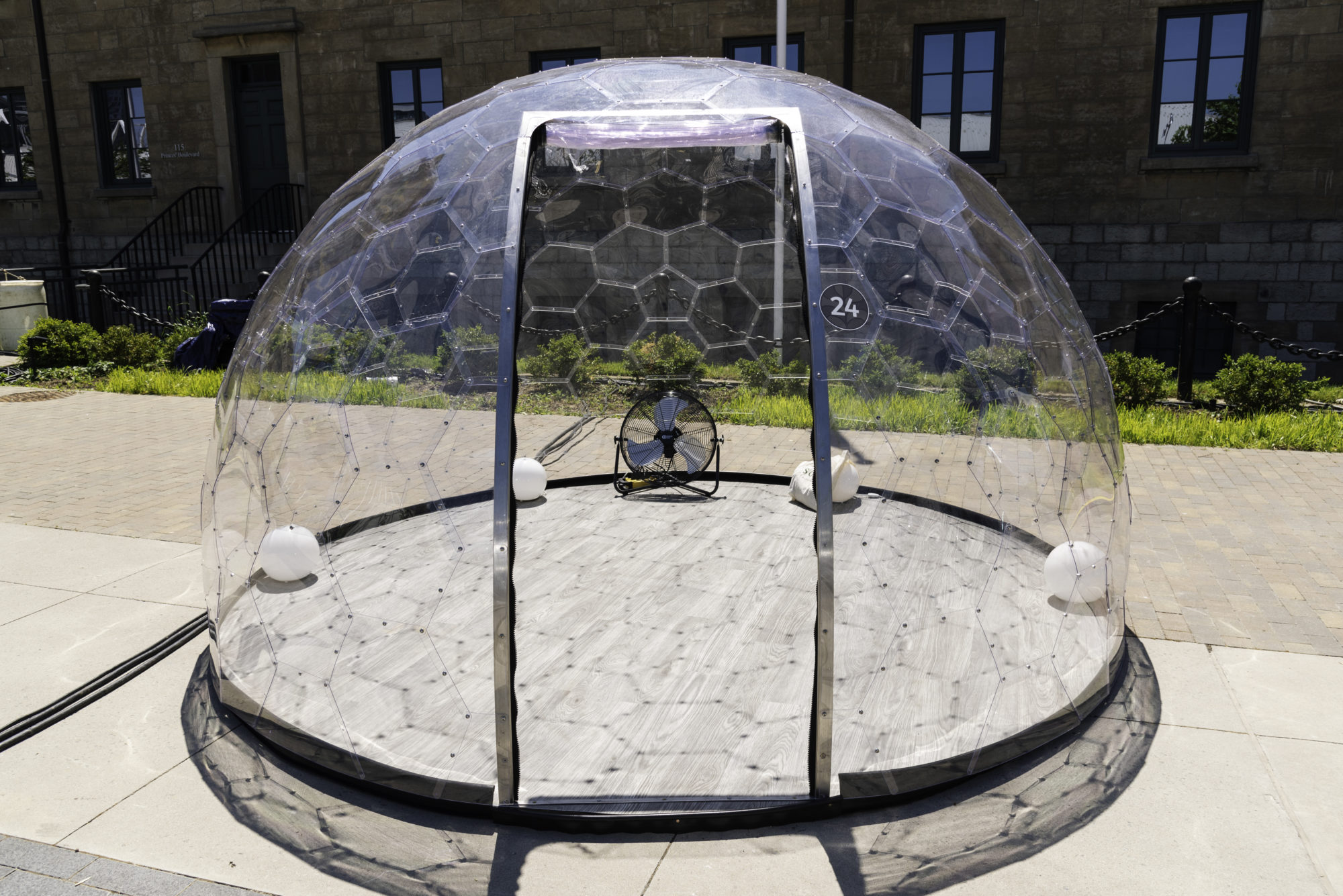 Participants have to bring their own mats, but the event also sells water bottles, coconut water, protein bars and yoga mats there: 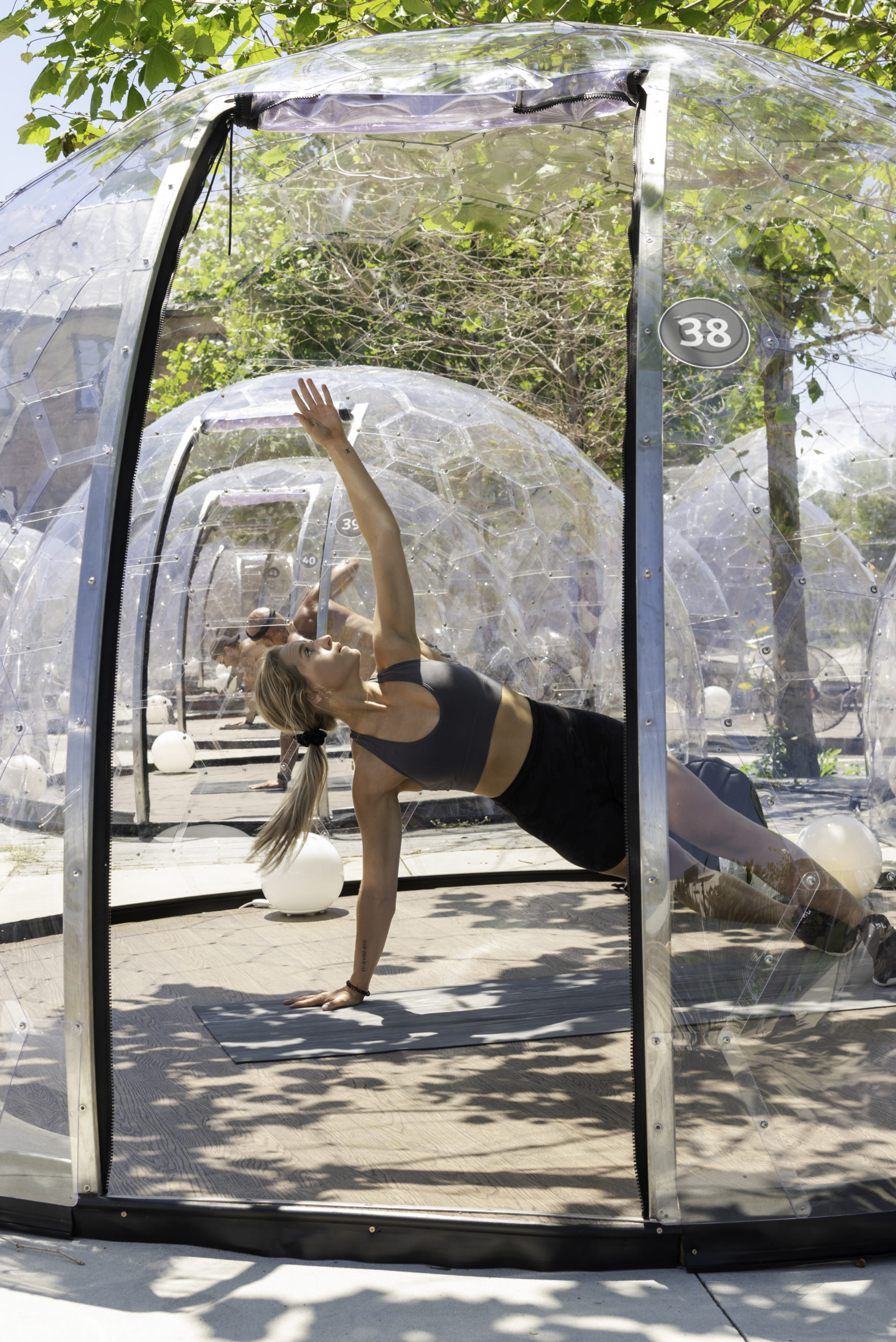 The space is set up like a concert, with instructors teaching from an elevated stage. They use a wireless mic that’s connected to speakers set up on pedestals throughout the space: 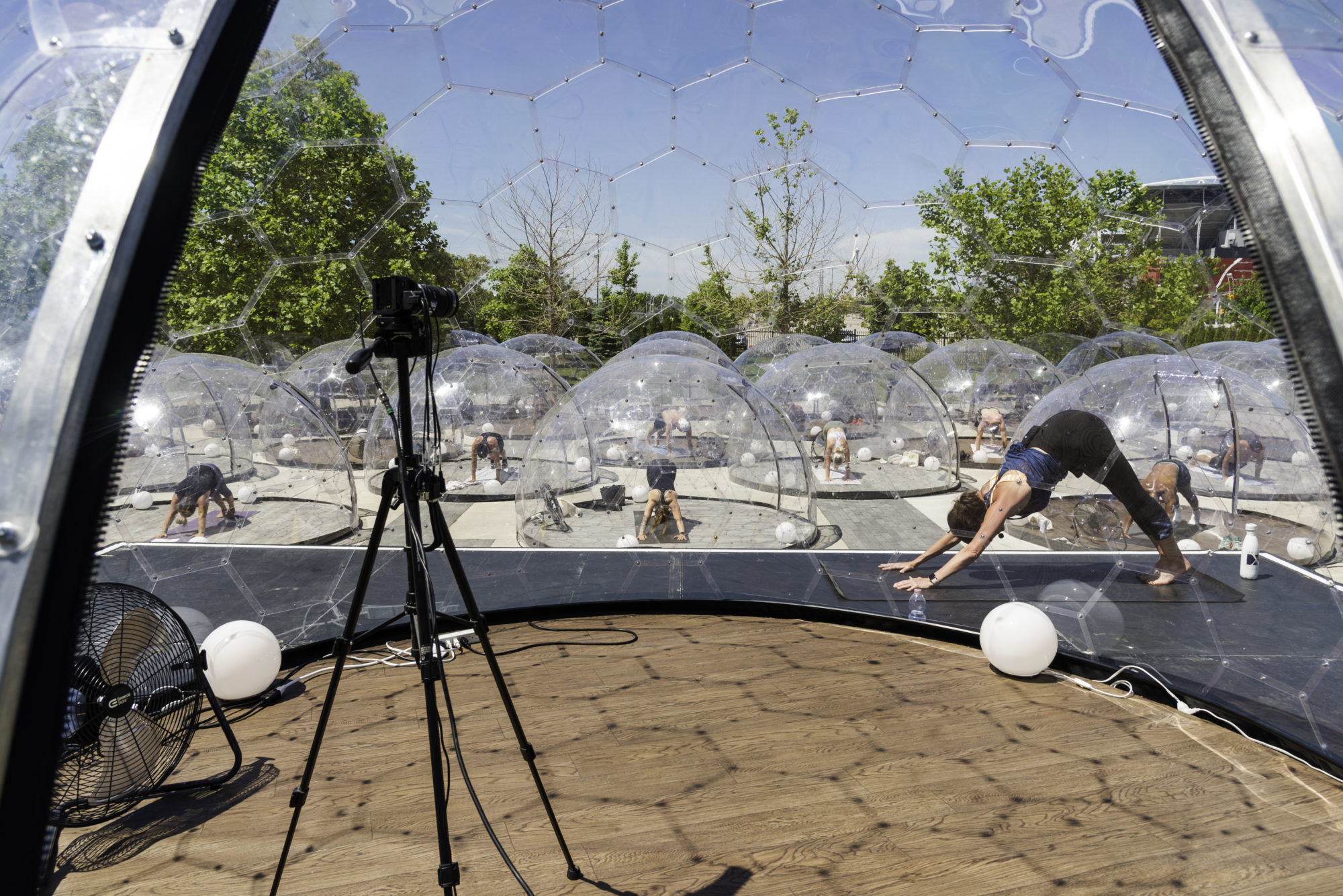 There are also giant video screens streaming what the instructor is doing: 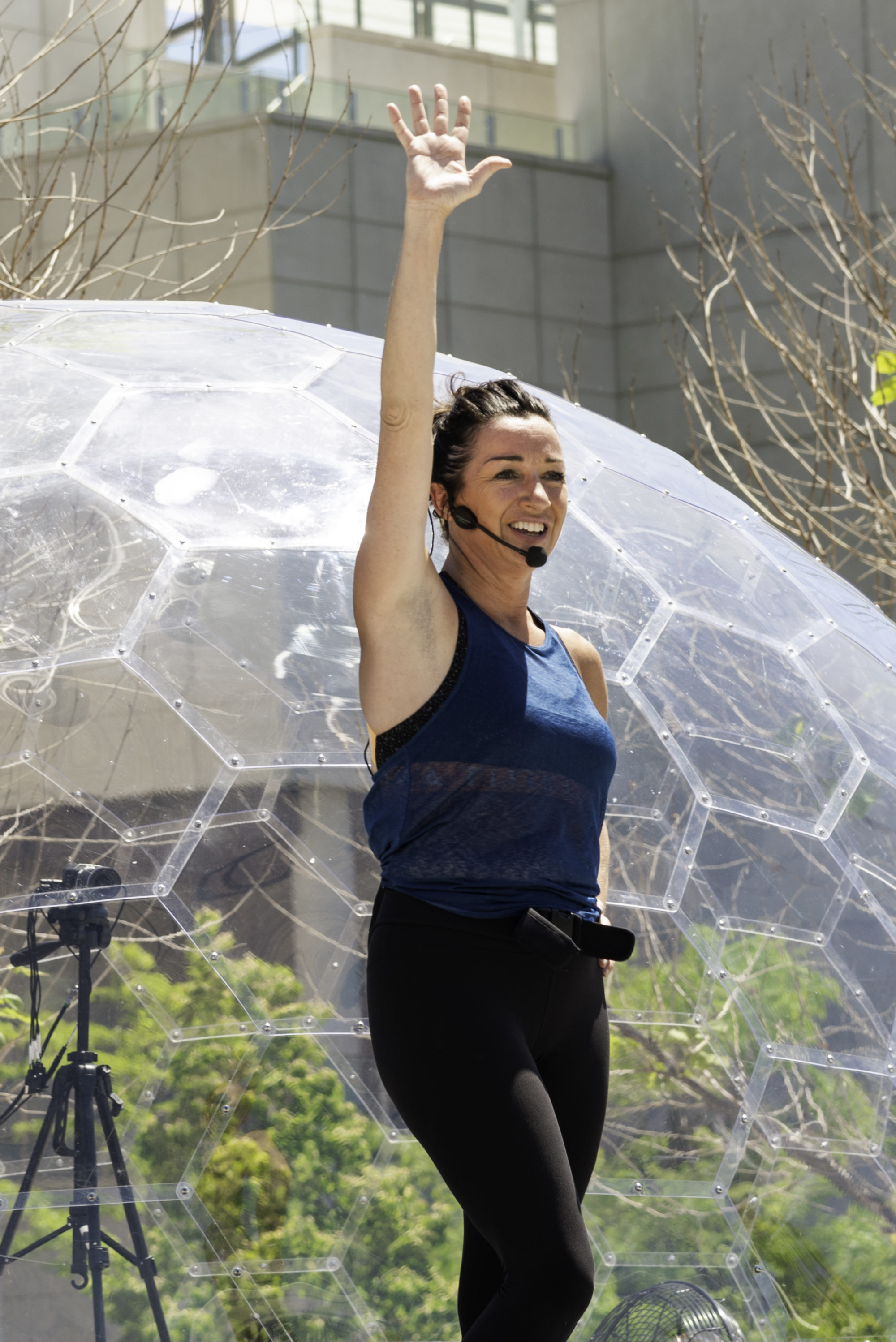 There are a variety of classes, from zen meditations to more intense workouts. Classes held in the middle of the day will naturally be the hottest: 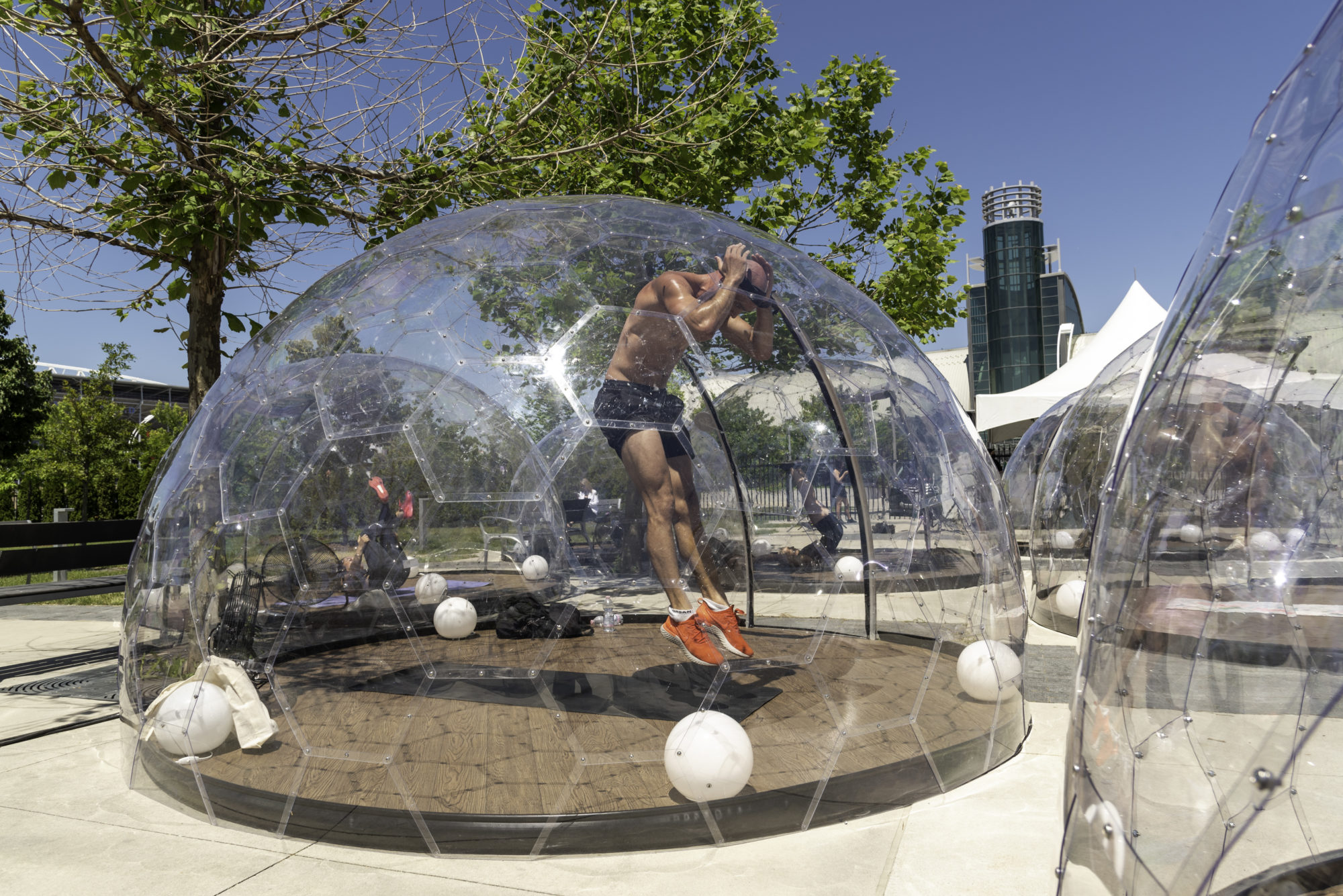 In the evening, there’s a view of the sunset and the domes are illuminated by spherical floor lights inside: 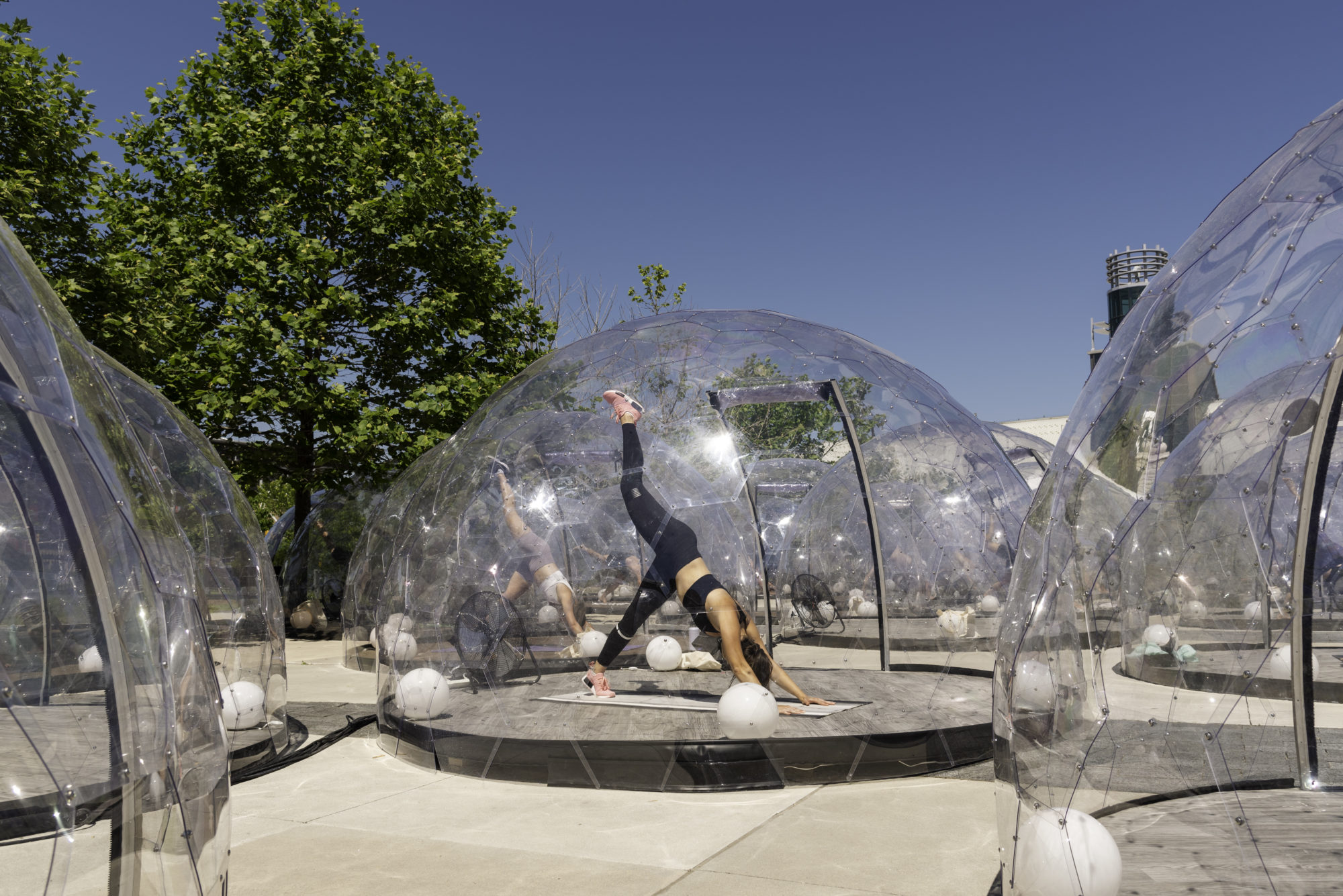 Here are some more images from the event, which runs until the end of July: 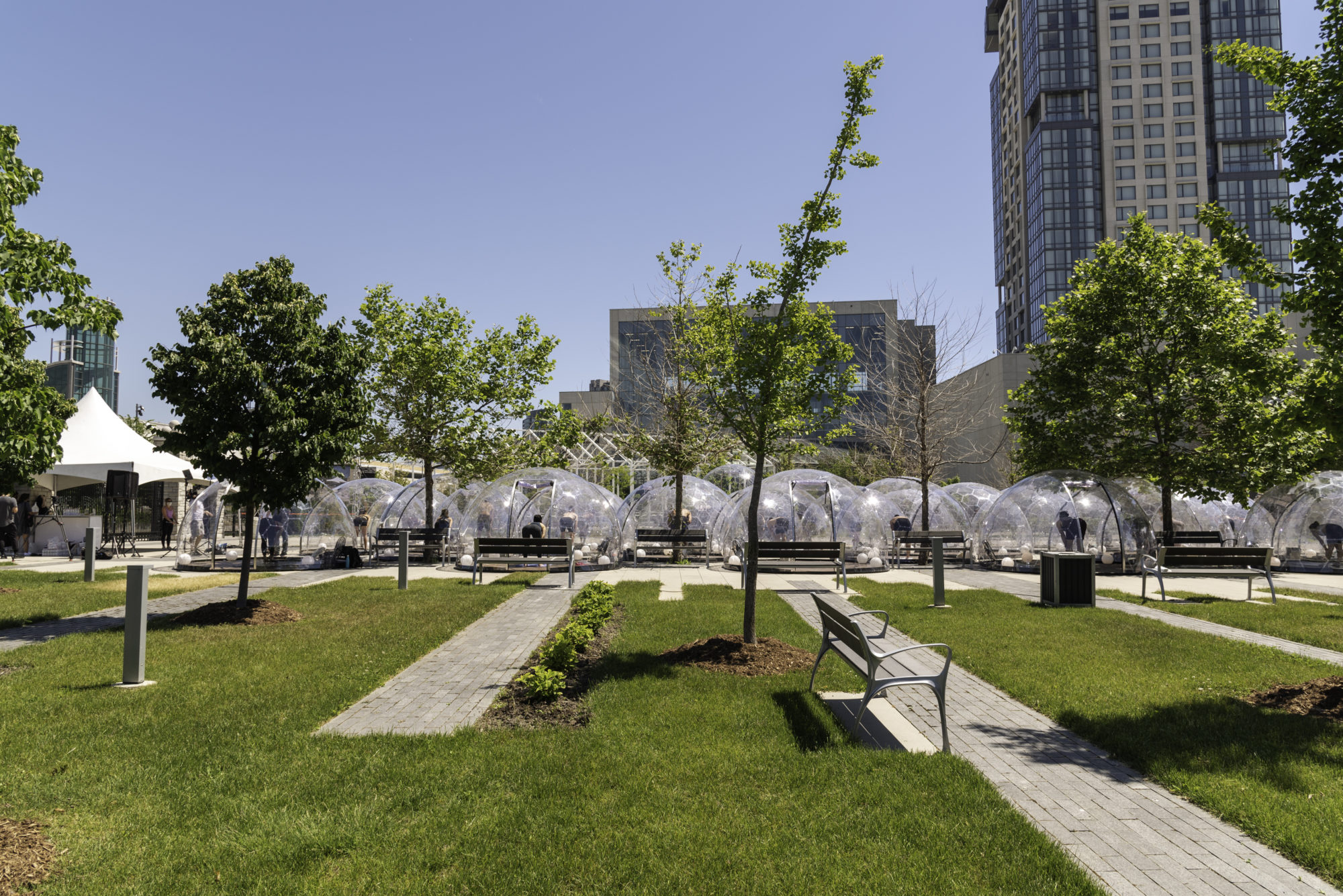 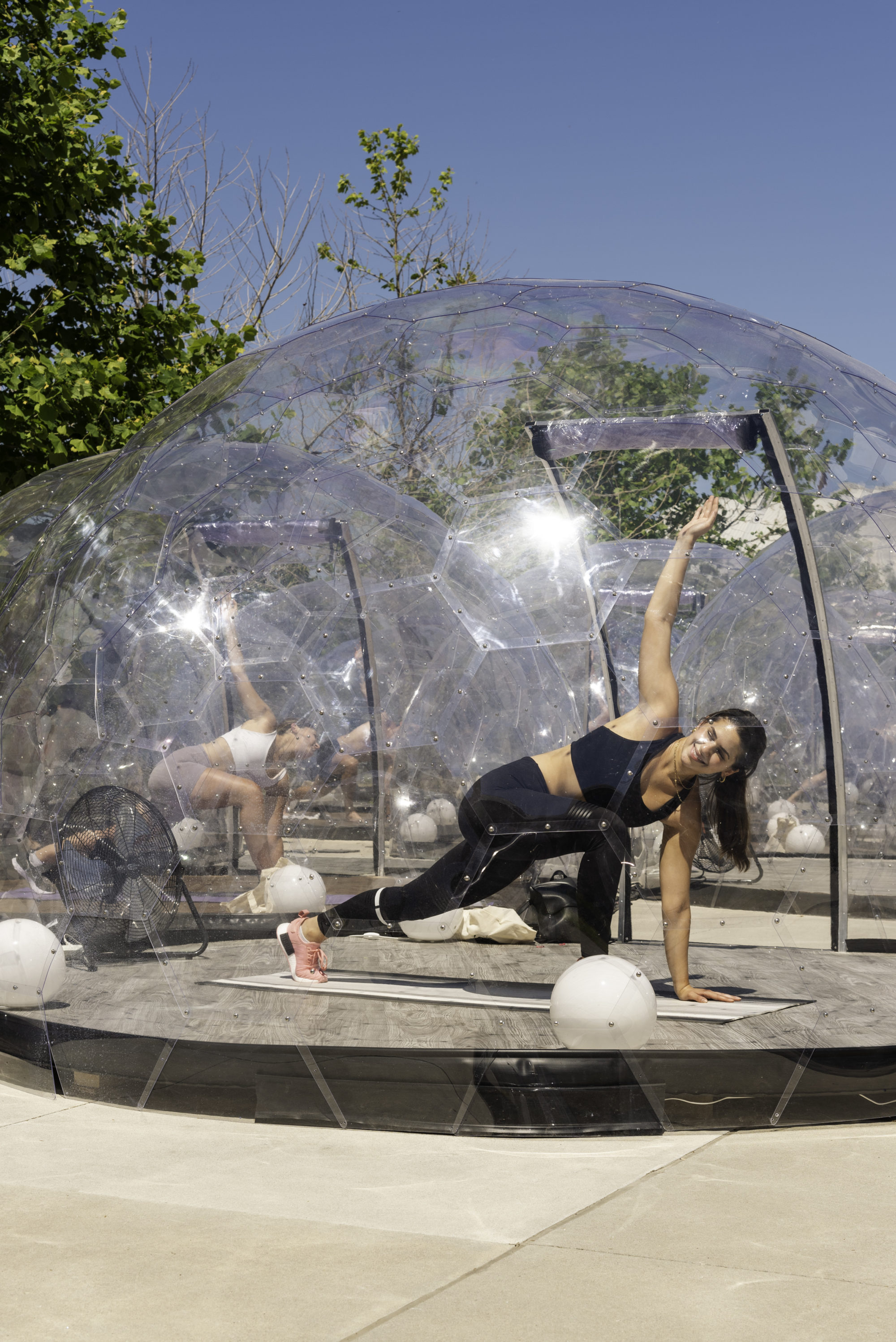 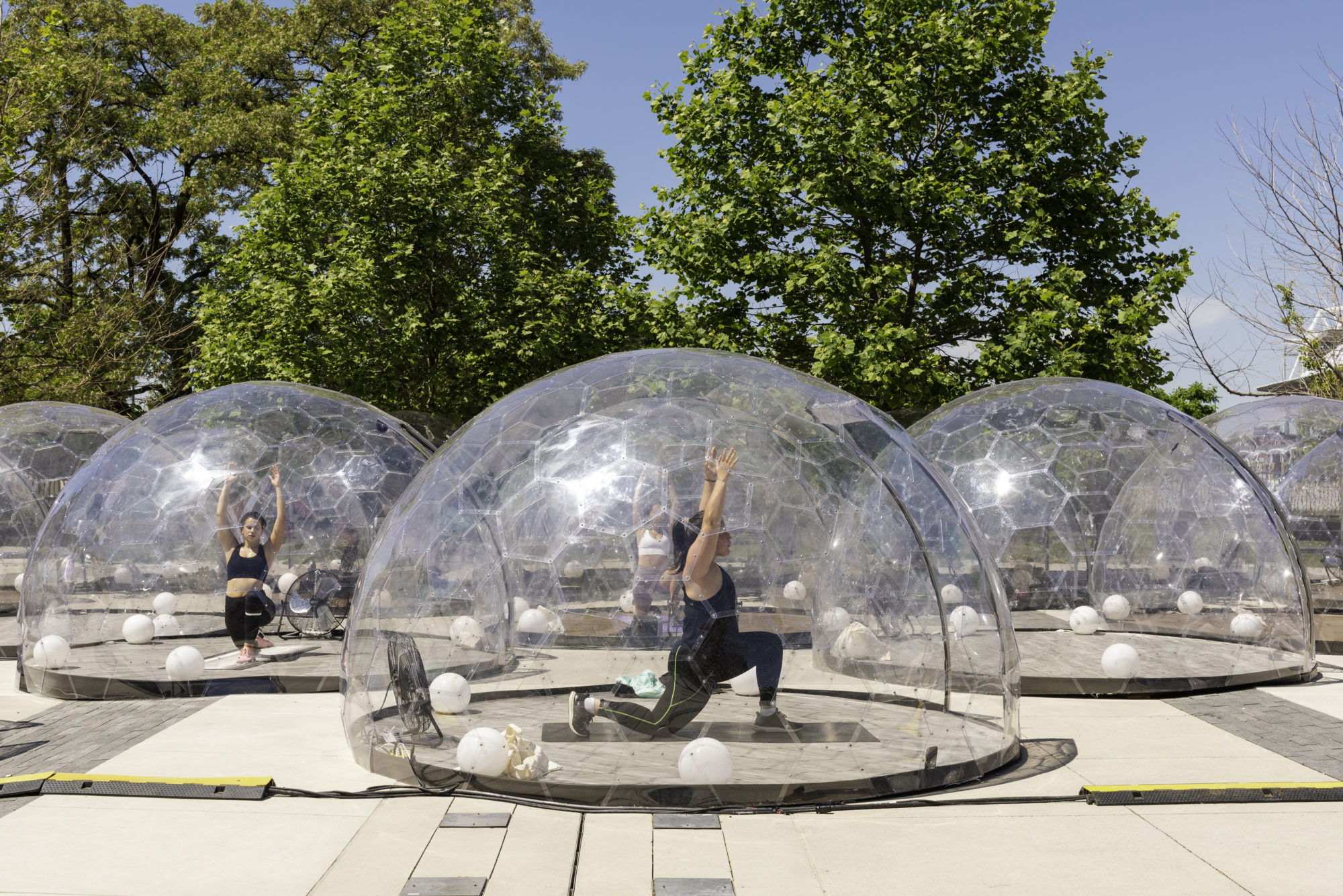 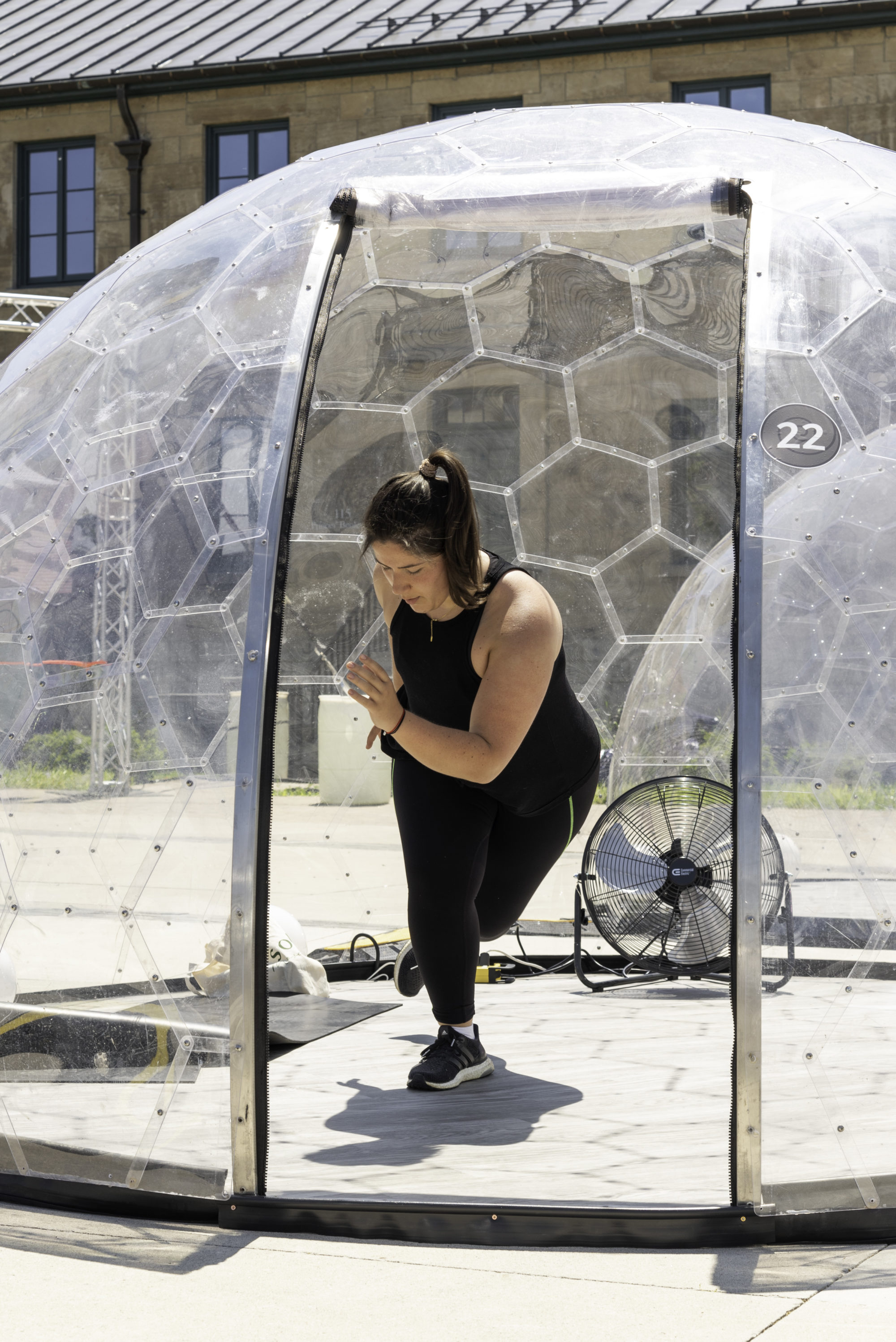 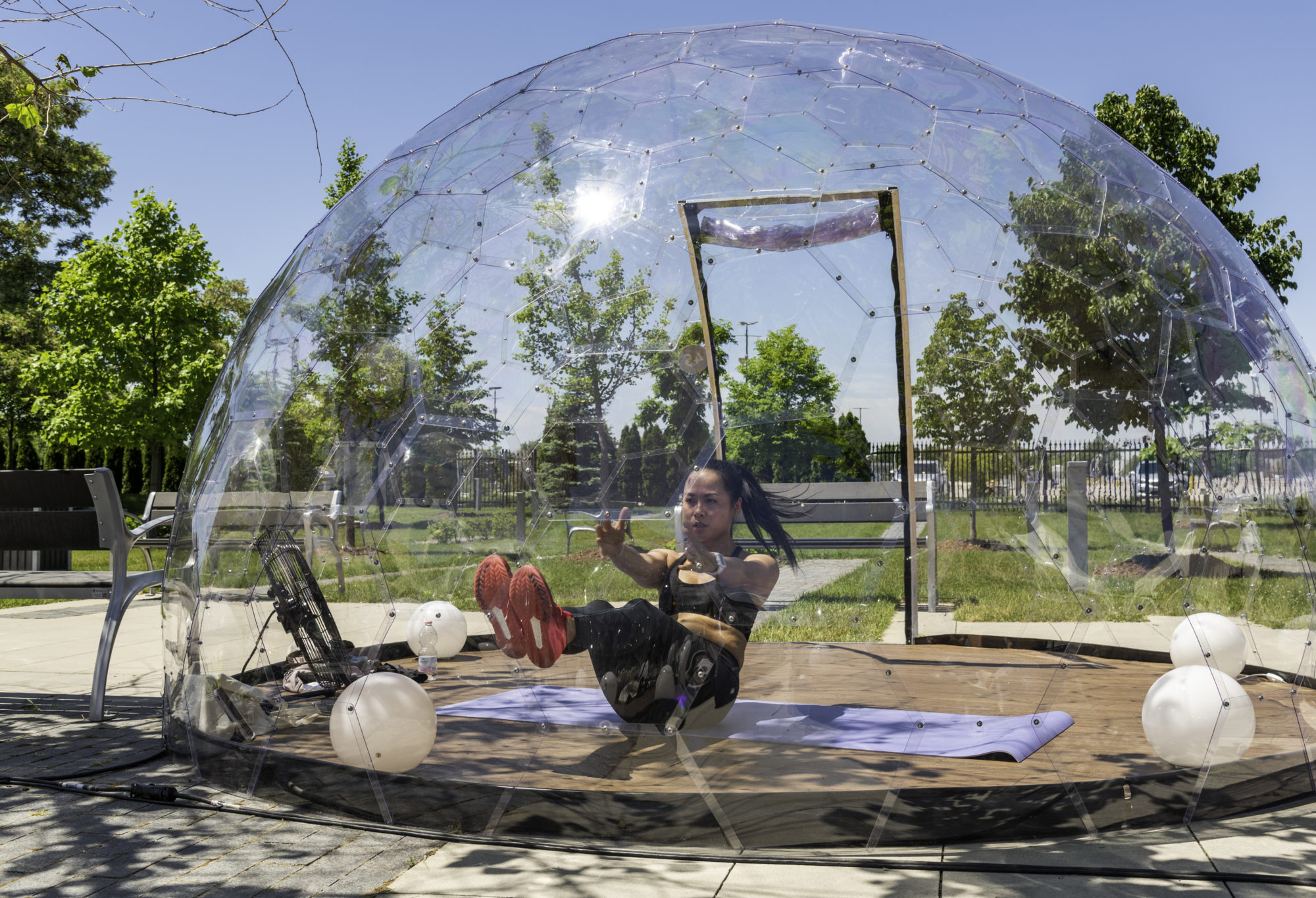 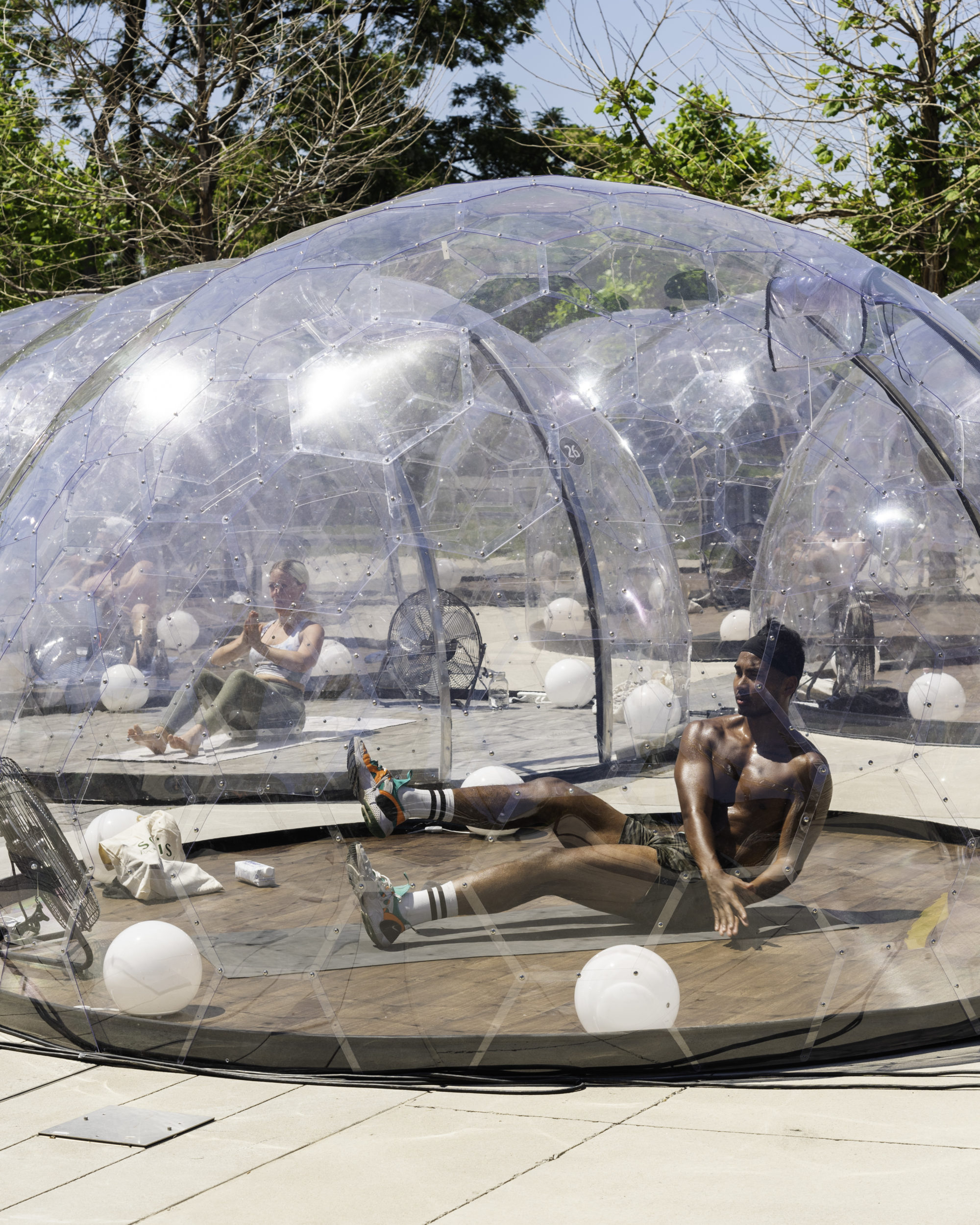 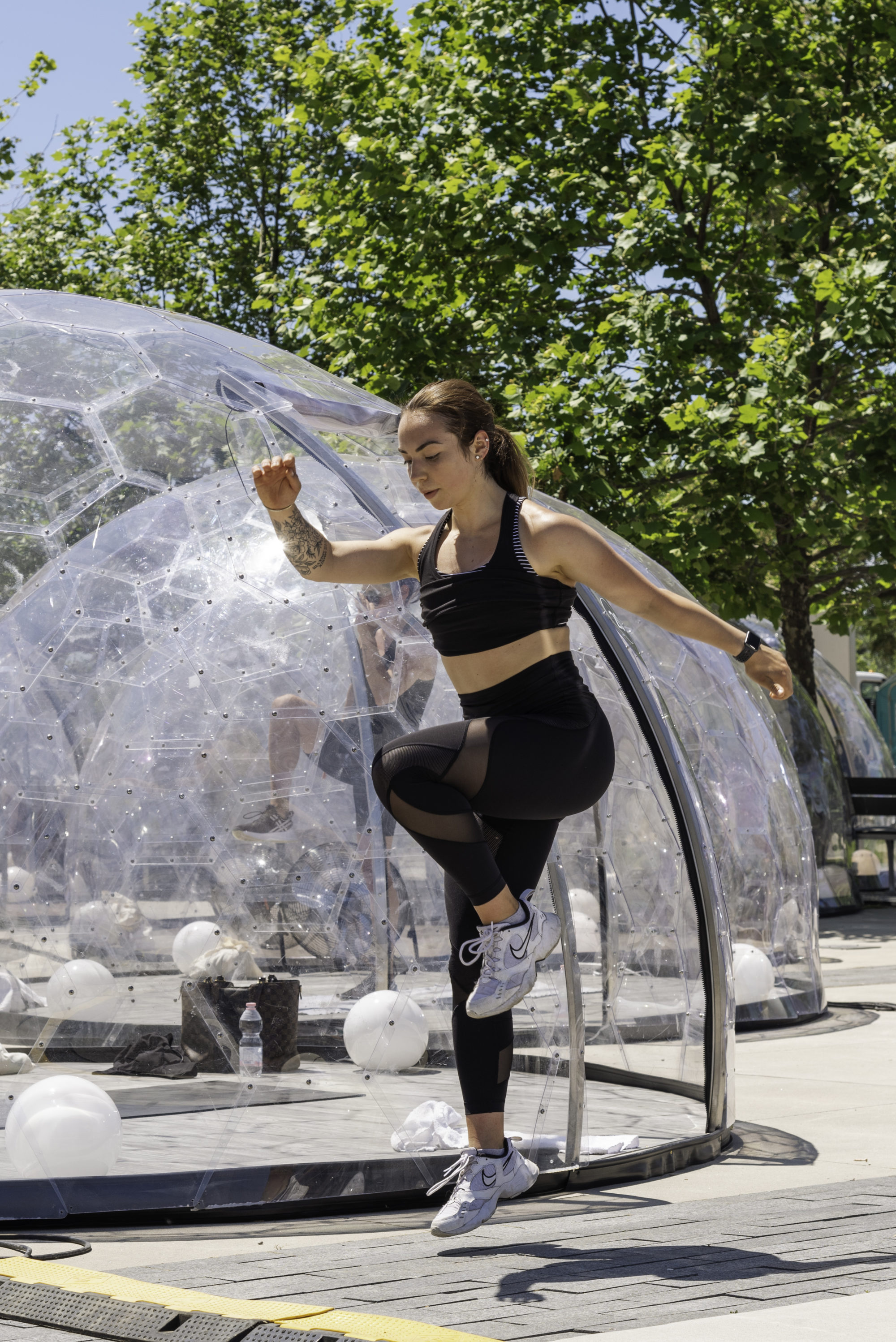 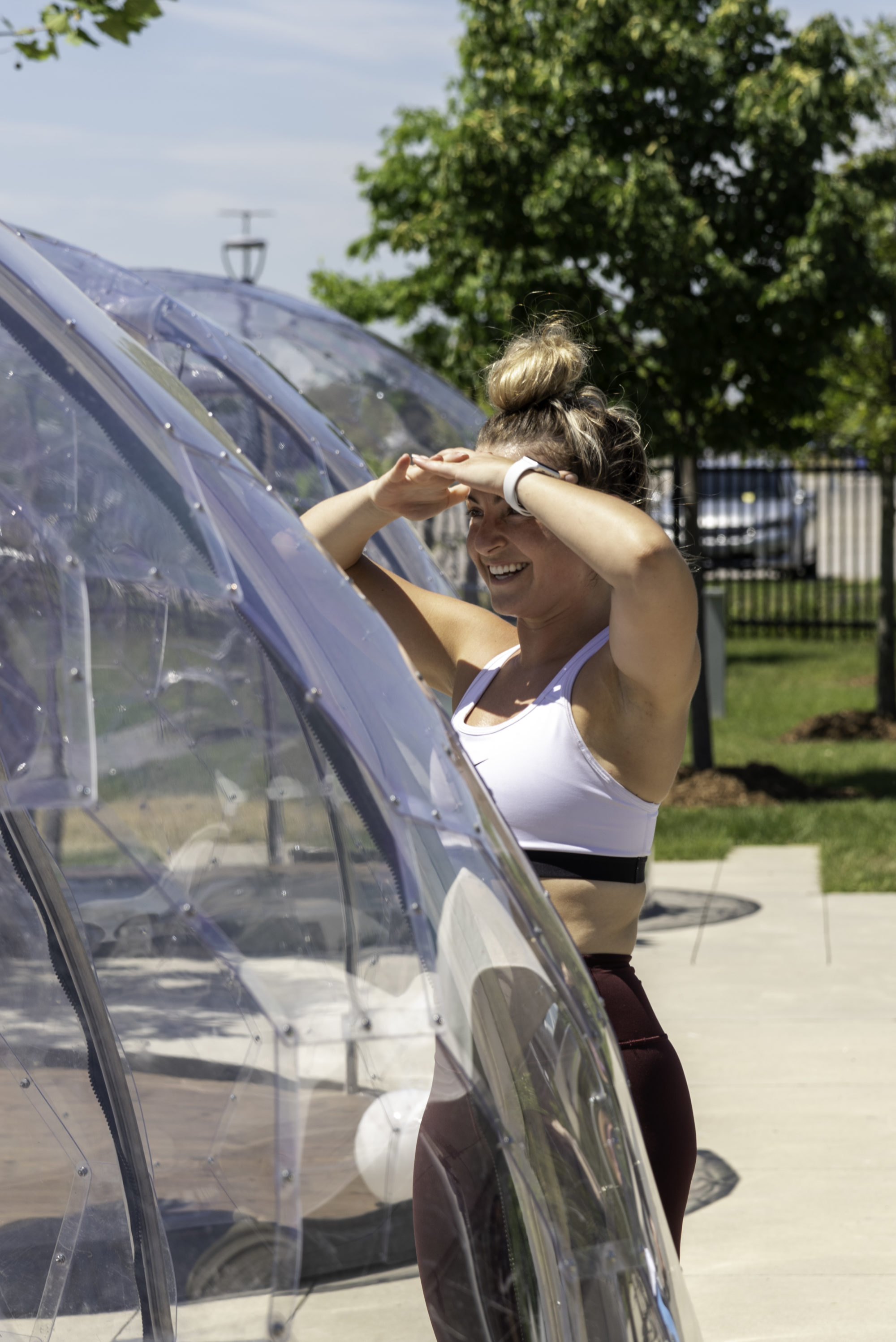 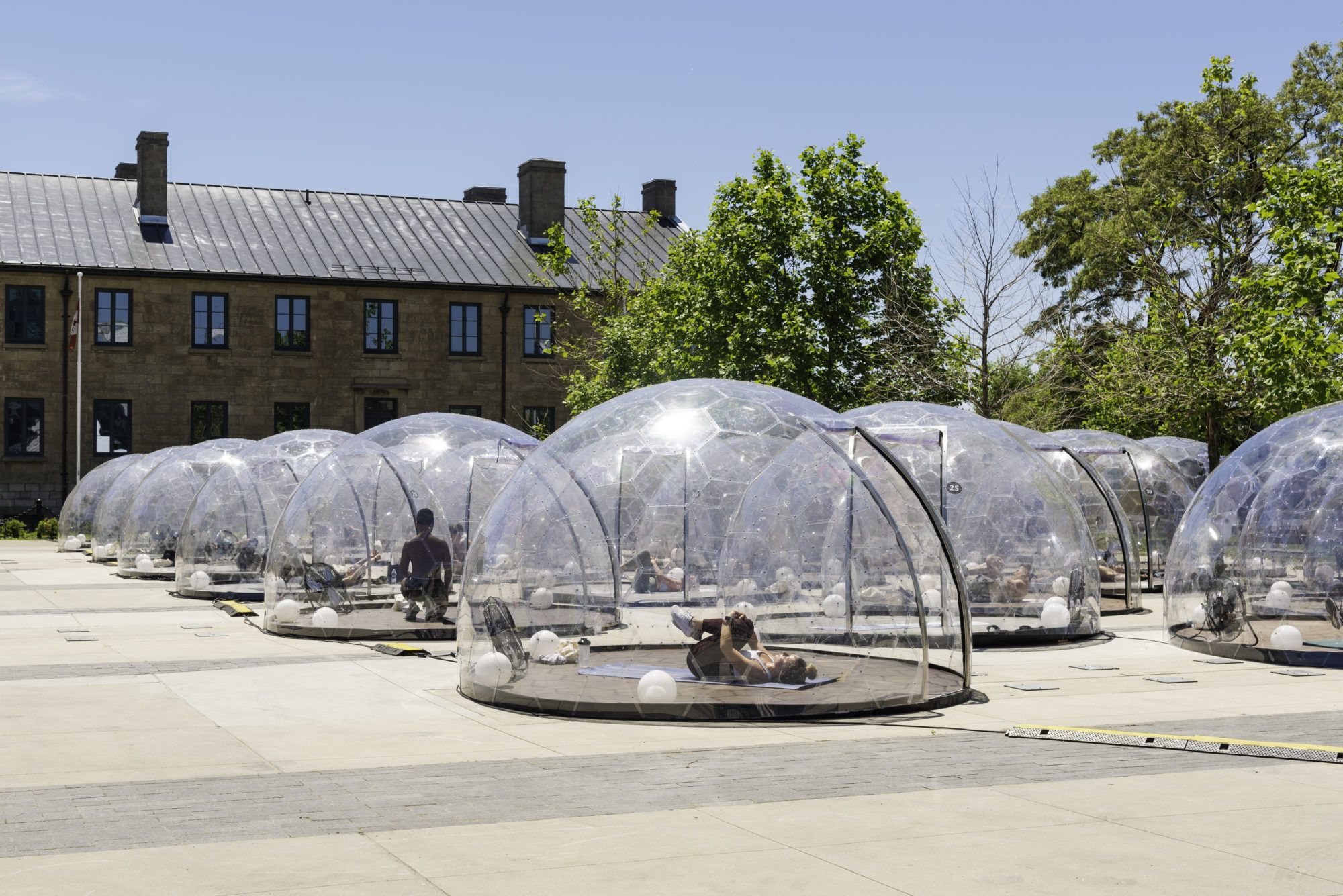