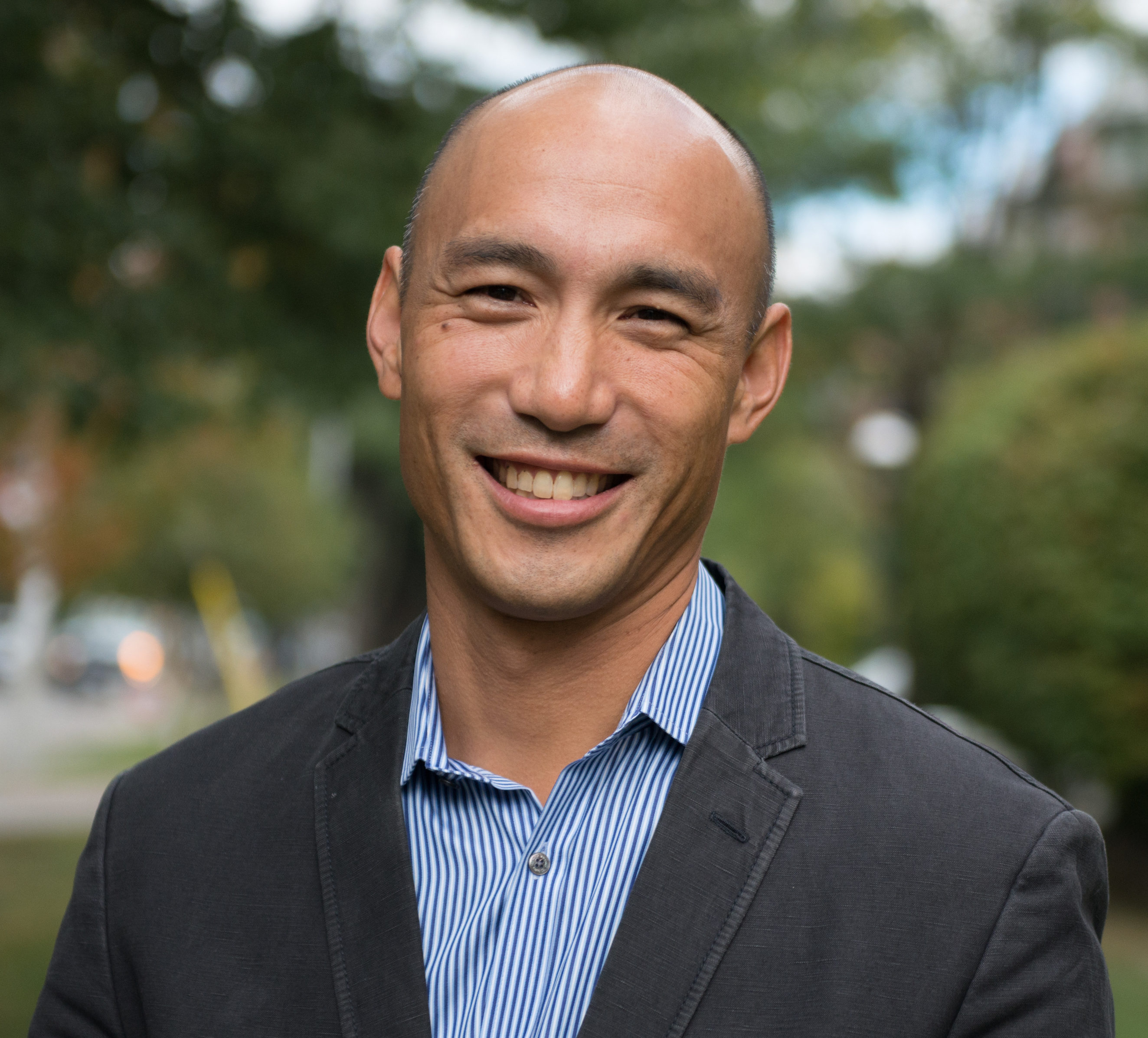 In the 1960s, my grandparents emigrated from Canton, China, to Toronto, and ended up at 7 Kensington Avenue. Growing up, I’d spend every weekend in the market with them. I lived with my parents in Scarborough, where we were the only Asian family in the neighbourhood, so being near Chinatown felt like home. I even broke my arm climbing a tree in the neighbourhood, and got my cast at the old Doctor’s Hospital. Now, decades later, I’m the CEO of Kensington Health, a not-for-profit community health organization that operates on the same site. We run a number of clinics, including a diagnostic imaging centre, a service centre for seniors and and a 350-bed long-term care home. Kensington Market is my community.

Pre-Covid, my day-to-day work was generally business-oriented: I worked closely with the board of directors, strategizing the future of Kensington Health and how we could serve our clients, caregivers and staff. Once the pandemic hit, the health of our residents became my number one concern. We were always several measures ahead of what the province had mandated. We moved quickly to universal masking, were rigorous about donning and doffing PPE and implemented screening stations immediately after the government instructed us to do so. We were militant about banning non-essential visitors, and we restricted staff members from moving between floors and limited staff who were working in multiple facilities, which caused major staffing gaps. But I knew that even if we shrink-wrapped our homes, the virus would find its way in.

On March 12, two or three days before the government banned guests, one of our residents had a visitor who we later learned was Covid-positive; Toronto Public Health did contact tracing and notified us. The resident she visited, who’s 83, was the only person on the floor to get infected. She started with a dry cough that progressed into a fever, and she was transferred to hospital for a couple of days. We didn’t think she was going to make it, but she rallied and made a full recovery.

Then, a week later, one of our staff members became infected with Covid. She was asymptomatic and didn’t realize she had the virus, so she came to work in the dementia unit. The entire floor was infected, as well as five or six staff members. The dementia ward is the worst place to have a Covid outbreak because many of the residents tend to wander. They’re quite restless, and it’s hard to keep them contained. That’s how the virus spread. Of the 24 people on the floor, 22 tested positive for Covid. Despite the screening stations, despite universal masking, it just takes one little mistake. I knew an outbreak was bound to happen regardless of our precautions. We were playing roulette.

What you’ve heard in the media about long-term care is true. We were already short-staffed before Covid, and as the number of cases increased, the situation became unbearable. There were four staff taking care of 24 people—half our usual complement. The team was scrambling. I thought about another situation we faced in health care, when medically assisted dying was legislated in Ontario. Shortly after the legislation passed, we had our first request. Our chief of anesthesia showed up, hands shaking, sweating, nervous, ready to carry out the order. He said, “If I can’t do it myself, I can’t ask my team to do it.” When Covid struck, I had to put out an all-hands-on-deck call to all of our staff at Kensington Health working in different areas, like the surgery centre, to see if they would be willing to work in the long-term care home. About 20 of those people put up their hands to volunteer. It was unbelievable. They demonstrated such courage. And I  knew that I couldn’t ask staff to help if I wasn’t able to help out myself. Half of the individuals on the dementia ward require help with feeding, so that’s what I did.

The first day I went to work in the dementia ward, I wanted to throw up. I was scared shitless. I had all these visions of people on ventilators, struggling to breathe—even though we send people to hospital if they need to be intubated. I had no idea what to expect. All the staff wore full PPE: the mask, the shield, the hairnet, the gown. When you look in a person’s eyes, you see the truth, and what I saw in the staff’s eyes that day was fear. I know they were thinking about their families, and whether they’d pass the virus to them. I still have nightmares about it.

What I saw on the residents’ faces was the complete opposite. Most of them had no idea that there was even anything wrong. Either they had very mild symptoms, or they were asymptomatic. I made a point of going in during meals, when I could help the most, and I would come in on Sundays, after I had finished up grocery shopping for my mother. The weekend shift is usually low on staff to begin with, and even more so during Covid. I formed close relationships with three residents in particular. I learned their behaviours, what they like to eat, and how to motivate them to eat. I’ll continue to feed them after this is all over.

Because we were so short-staffed, and we couldn’t let in non-essential visitors, the team came up with a creative solution: we hired a handful of our residents’ family members to help out on the ward. We said, “Okay we’ll hire you, we’ll pay you, but your job is to take care of everyone.” They had no problem with that. We call them unit aides, and like me, they’re responsible for basic tasks like feeding the residents, keeping them company, helping set up the iPad for virtual visits, and facilitating activities like puzzles and games. Because of potential legal issues, they’re not responsible for things like lifting or bathing the residents. That’s the role of personal support workers and nurses. Those folks carry the hugest burden.

Eight of our residents developed severe symptoms, and over the course of a week or so, they all died. Dealing with the bodies was difficult, because the funeral home staff are not allowed into the home. The responsibility fell to our staff, who aren’t used to that kind of work. They were required to place the bodies in transparent plastic bags, rather than normal body bags, and wheel them through the unit. I think a lot of our staff were severely traumatized.

Because I was working on the Covid ward, I self-isolated from my family when I came home from work. It was hell, but I needed to do it. I had a routine. I wore scrubs to work, and when I was finishing up my shift, I would strip off all PPE and wash my hands before leaving the floor. Then I would change into regular work clothes, put the scrubs in a pillowcase, bike home, head straight to the garage, throw the pillowcase into the laundry and hop into the shower. For two months, I ate by myself in the kitchen, I said hi to my kids from a distance and I slept by myself in the spare bedroom.

I’ve seen some unbelievable acts of kindness and support for our staff. The Harbord Village Residents’ Association arranged a parade where they waved at residents through the windows. Tim Hortons has donated coffee and doughnuts, and our maintenance guy bought 350 meals for the staff. We’ve been working with these contractors for years. They made me realize how strong the community in Kensington Market is.

Another thing boosting my morale is filming TikTok videos with the staff. During lunch breaks and in between shifts, they practise TikTok dances in their full gear. I was initially skeptical—I didn’t even know what TikTok was—but I started filming them and they made me laugh my head off. These silly dances helped unify the team in the middle of a horrific situation. It was amazing. Some of the residents even participated in the TikToks; a lot of smiles and dance moves were busted out.

I’m haunted by this entire experience. I haven’t been able to sleep for two months. I’ve had massive migraines, which I’m sure are stress-related. On the business side of things, I had to lay off 80 employees, which killed me. Pre-covid, patients were cancelling procedures en masse; they didn’t want to come in for fear of Covid. And if we don’t do procedures we don’t get paid, and I can’t retain staff. That has been a source of huge anxiety. I know that for all the anxiety I feel, our staff feels 10 times worse.

The negative press around long-term care has been depressing, but it highlights the vulnerabilities of our sector. Government needs to do a lot to improve how we take care of our frail and elderly populations. We need to ensure that our personal support workers are give full-time permanent jobs and the appropriate pay to match. And we need to renovate long-term care homes to restrict spread. At Kensington, we’re all private rooms, and we still had eight deaths. In other homes, where there are four to a room, the death toll was much higher. We need to redevelop those rooms into two-bed units or single beds. While I support the government initiative to build more long-term care beds, maybe we should reduce the number of new beds and allocate that money to refurbish older facilities.

As of last Friday, our outbreak is over. Last week was the first week I didn’t go out on the floor. Instead, I was attending system-wide meetings to help map out the future of the organization. We have plenty of challenges ahead, but I’m finally able to sleep again.