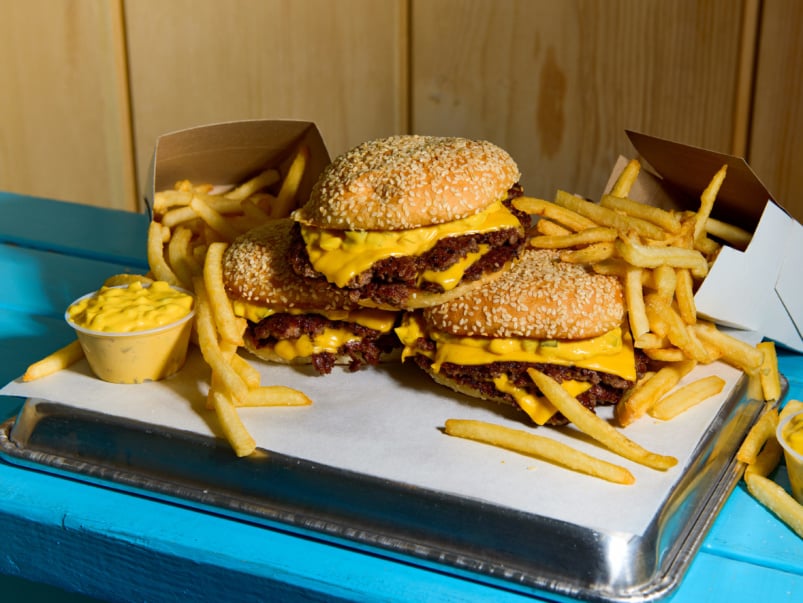 Can a city have too many great smash burgers? Answer: nah. Enter Victory Burger. While Piano Piano is still operating on Harbord Street for takeout, it also now plays host to Barry’s new virtual burger joint, smashing patties seven days a week for contactless pickup at the restaurant or for delivery via UberEats. It’s the first of two new virtual kitchens for Barry—Victory Pizza is scheduled to open later this month.

“Over the years I’ve constantly gone back in making different styles of burgers but was never happy with it, despite having one at Café Cancan,” says Barry. “This cheeseburger is inspired by childhood memories. I’ll characterize it as being like how fucking good that cheeseburger was when you had it as a kid—but now it’s fucking excellent as an adult.” Each burger features a smashed patty made with Woodward Meats’ AAA Canadian beef on a house-made milk bun, topped with American cheddar, dill pickles, onions and Victory sauce ($10).

After plenty of R&D to find the perfect bun, Barry says Victory Burger’s version is made using an in-house Japanese milk bread recipe, baked fresh daily. The buns differentiate Barry’s burger from many others in the city that employ a Martin’s potato roll. Barry himself isn’t a fan of the popular potato bun, citing weak structural integrity. “With a Martin’s roll, your first bite is so different from your last bite,” Barry says. “Your last bite is almost not even there—it’s disintegrated into nothingness. Our buns hold all the way through.”

The short menu also features a double burger ($14) and fries tossed in pecorino and pepper ($4). Customers can combo it up, tacking on those cheesy, peppery fries and a soft drink to their burger order ($16-$20). If you’re looking for something a bit stronger than pop, there a few beers—some local, some not—and a short wine list. And for dessert, there are Victory Moon Pies, for which two house-baked chocolate chip cookies sandwiching vanilla fluff are dipped in milk chocolate ganache and finished with Maldon salt ($8).